The Top 10 Most Awesomely Hilarious Snowsports

The Top 10 Most Awesomely Hilarious Snowsports

Let’s face it: skiing and snowboarding, they’re both played out. The future belongs to innovative snow-sliding techniques like these ones.

10: Skiboarding
A skiboard is defined as any ski shorter than 100cm. Some of the greatest heroes in freeskiing, most notably Eric Pollard and Mike Wilson, actually skiboarded before moving on to longer twin-tip skis. Skiboarding was even in the X Games for a couple of years, before a massive drop in popularity saw most people move onto longer sticks, except for a few die-hard enthusiasts.

9. Skibob/SkiBike
In 1892 the idea for a bike with skis on it was first patented, but it wasn’t until 1954 that the first international race was held. Then, not so long ago, some crazy mountain bikers decided to mount a downhill mountain bike frame on some skis and succeeded in making a pretty awesome hybrid sport: skibiking. It will be interesting to see what the future of this sport holds.

8. Snowscooters
The Snowscoot is a slight variation of the snowbike, and they’re pretty much just as cool as the traditional wheeled scooter (take that as you will). There are even full-time professionals who spend all their time scooting around on the funny little things, and some of them are actually pretty good.

7. Freesledding
Freesledding or “extreme” sledding has been around for a long time. Ever since traditional bobsleds have been around, enthusiasts have tried jumping them. These days freesledders are known to do massive jumps, and even slide boxes.

6. Big Feet
The Big Foot was invented in 1990 and is not only the predecessor of skiboards, but is also credited with being one of the first “skis” with a sidecut. Yes ladies and gentlemen, the Big Foot started the carving craze of the mid-90s. After being the most sold ski product in 1992, it is sadly a rarity on ski slopes today. 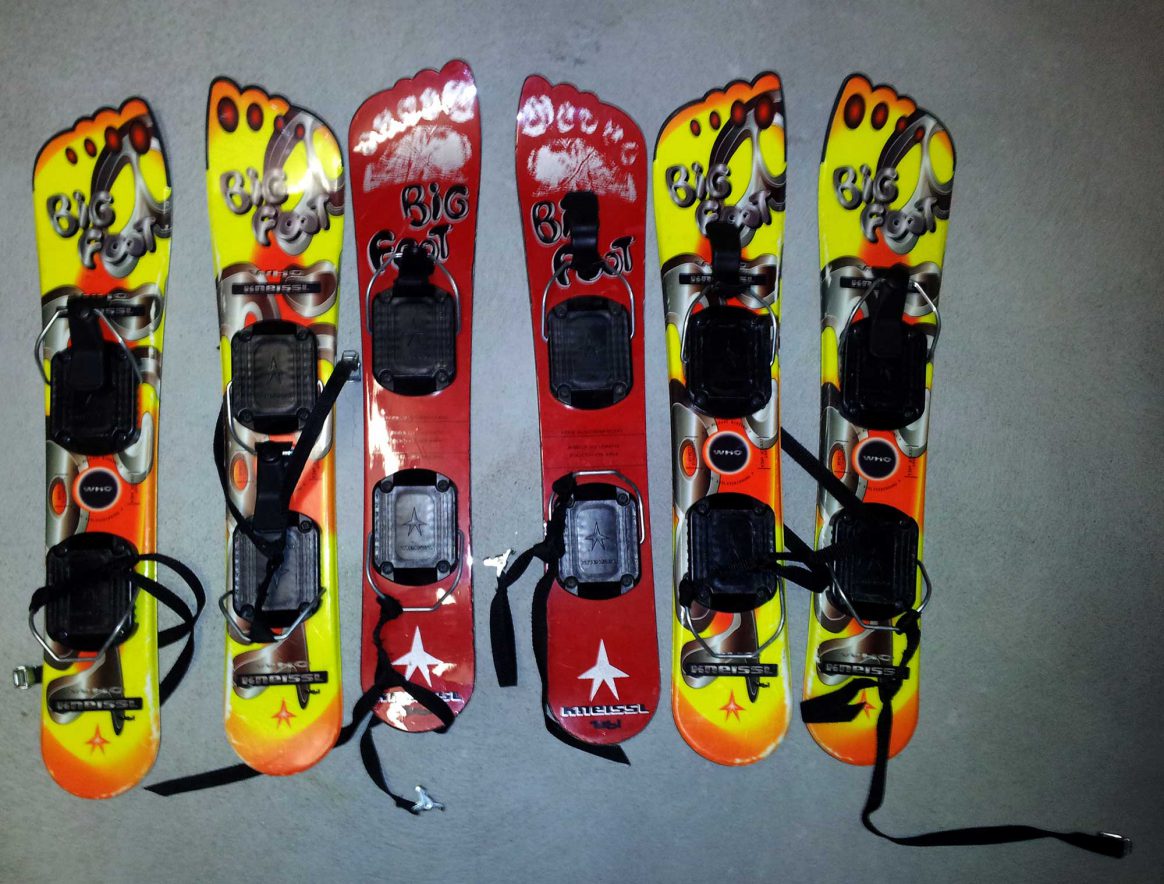 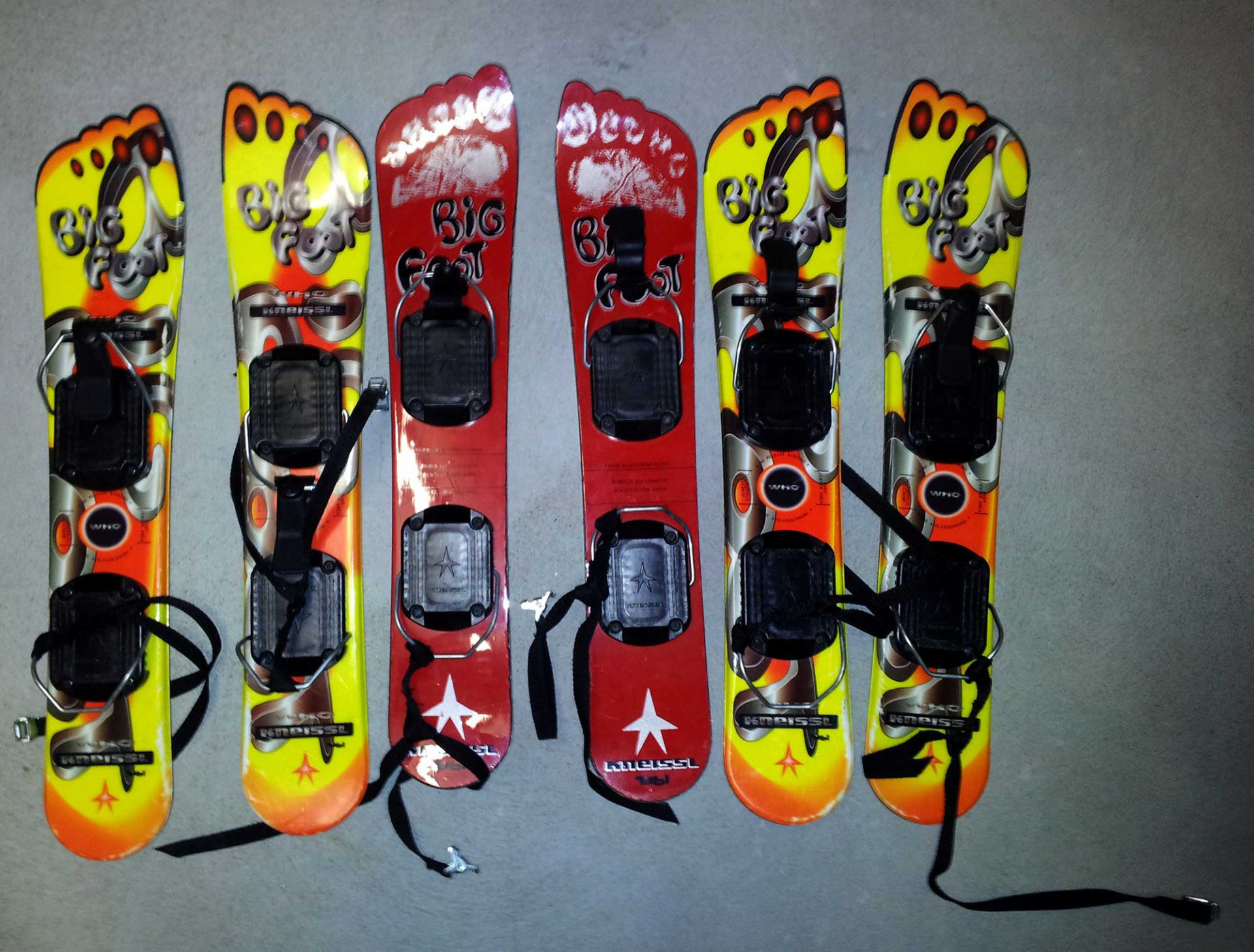 What is the plural form of Bigfoot? Bigfeet? Or Bigfoots?

5. Figl or Firngleiter
This sport, invented in the 1930s, was the precursor to the Big Foot and the skiboard. It has a firm following in Austria and can only be done in warm and slushy snow. The tiny boards are strapped to the feet, and one brakes by leaning back and accelerates by leaning forward. There was even a World Championship in 1987.

4. Airboarding
This is essentially boogie boarding, but on snow. Users inflate a plastic sled, then send it down the hill as fast as possible. It seems that it also is compulsory to wear a helmet with a clap-down visor for extra protection while participating in this action-packed, futuristic sport. It’s also important to have teeth so white, they literally sparkle.

3. Freestyle Cross-Country
Freestyle Cross-Country skiing is not massively far removed from freeskiing, except for a few minor differences: all tricks are performed using self-generated speed and power, skinny toothpicks are used instead of skis, and brighly-colored spandex increase aerodynamic efficiency. Other than that, this relatively new sport probably has a bright future. They even make twin-tip cross country skis!

2. Monoski
The monoski was invented in the 1960s, then had an improbably huge boom in the early ’80s. Probably one of the most hilariously awesome sports to watch, this sport took the parallel turn to the next level. Who needs the freedom of two independent skis when you can clamp your two legs inextricably together on one board? Apparently there is also a newschool movement for this sport, which we can only hope will continue to flourish.

1. SledDogs
Huge in Korea and in some parts of Eastern Europe, SledDogs are the natural conclusion of the skiboard/Bigfoot craze. What’s the need for a ski when you can just slide around on your boots? SledDogs are specifically designed boots with smooth bases, making for a wicked time boot-skiing around the mountain. Forget about toting around useless accessories like skis and poles—this is finally a single piece of equipment that does it all!

Etna: Freeriding on another planet

On The Radar: Taylor Lundquist

Etna: Freeriding on another planet

On The Radar: Taylor Lundquist