Sean Jordan on continuing the legacy of the Stept crew, Donald Trump vs. Bernie Sanders, and his developing golf game.


One of the old Stept crew’s finest young talents, Sean Jordan has made his mark on skiing from the slopestyle course to the streets. Joining Cam Riley and Clayton Vila in Vila’s new film, For Lack Of Better (scheduled for release on 10 November), Seany J. shows he’s still on the forefront of the urban scene, even though he’s also been finding time to ski more than just the streets.

Great movie man! You guys just showed what you do in a way that no one’s tried to show it before.
That was the goal of the film. Everyone knows the typical ski segment and we’ve been doing it our whole lives. We wanted to get the insight on everything that happens before and after the shot, and get different kinds of people involved, people who might not ski and don’t know what’s going on if we don’t explain it.

Is it hard keeping up with Clayton and Cam on the mission that they’re on?
Definitely. I’m popping in and out a lot of the time, and those guys are just hunkered down, always stacking so many clips. So when I’m in and out, there’s definitely some pressure to keep up with them. But that’s our crew, and we work well together.

Are you scared for what they’ll try to do next year?
No, just excited. Hanging out with those dudes and skiing with them, everyone’s always pushing each other. You see one guy lay something down and you’re like, “Shit, now I’ve got to do something.” We feed off each other and we’ve been working together for a long time, so we’ve got everything pretty dialed.

It’s cool that the tradition of the Stept crew is being continued in ski film.
Like we say in the movie, this is that all we have to do. Just because the Martinis are using Stept to do other work doesn’t mean that we’re going to stop skiing. We knew we had to pick it up and figure it out, but it all came together really easily. It was an easy transition, and it’s an awesome opportunity to be able to work with TGR.

You’re a different style skier from Clayton and Cam. I mean, you actually go out and ski at a resort now and again.
Yeah, I like to get out of the streets when I can and ski the mountains and maybe even some powder if I get the chance. Those guys are definitely fully engrained in the street-skiing scene and that’s them, totally—they’re some of the best in the world. I would consider myself a street skier as well, but I definitely have 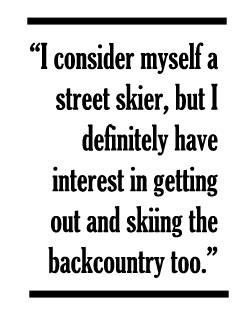 interest in getting out and skiing some backcountry too.

What was your favorite trip from last season?
I would have to say going to Italy with Matchstick Productions. I don’t go to Europe too often, so it’s exciting whenever I get a chance to go over there. We were in the Italian Alps at Gressoney. We actually ran into the Nimbus guys out there. It’s not exactly a hidden gem—people know about it—but it’s an amazing resort with endless terrain, and the snow was really good this year. I was with Bobby [Brown] and Scott Gaffney. Meeting Gaffney was really cool, he’s been around for a long time. The people were great, the food was great, the skiing was great – it felt more like a vacation than a ski trip.

Coming to Europe is always a crazy experience for American skiers.
It’s so different. They all ski on-piste, you know? We were jumping little cliffs right off the main trail, and like 50-60 people stopped to watch us. We were like, “Guys, this is in your backyard! Why aren’t you jumping off of it?” It’s a much different culture, and its cool to see it because they grew up and live on skiing – it’s engrained in their culture. Here it’s brought on as a sport or a tourism thing – there they’ve been doing it their whole lives.

Your new K2 poster is rad. How was it riding those skinny skis?
That was honestly one of the best photo shoots I’ve ever been to. We showed up at Mount Hood and there was an awesome jump and like 25 pairs of straight skis, like 200cm, and everyone just instantly hopped on those, just disregarded the jump, and starting cutting Wongbangers and turn these 200cm straight skis. We had a great time and got a lot of good content from that. It was hilarious to see people like me and [Sean] Pettit, people who’ve skiing their whole lives, just tomahawking down the hill trying to make turns.

Are you a Donald Trump man or a Bernie Sanders man?
I am very much enjoying watching the presidential debates, but unfortunately I can’t give you an educated answer on who I think should run our country. I don’t know if there are many eligible people among these candidates. God bless America, because we’re going to need all the help we can get.

What keeps you busy in the summertime? 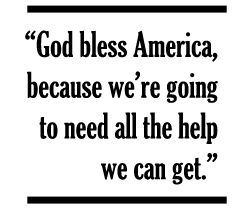 My girlfriend and golf, literally. Those are the two things. I’ve got to see her as much as I can because I’m never home during the winter, and I have this crazy urge to be a good golfer. And you can’t just be a good golfer—you have to go out and play all the time. So that’s my new thing, golfing.

Favorite golfer?
Jordan Spieth! He’s a young Under Armour guy, so we can connect there, and he just won the Masters and the U.S. Open—he’s on a tear. He’s a good guy and a great golfer!

What’s in the future for Seany J?
I want to expand my skiing and ski as many different styles of terrain as I can. I want to hit backcountry jumps, drop a few cliffs, continue to ski the street and hopefully try to blend the two together—get some jumping going in the street or slide some metal deep in the woods. So we’ll see—there’s always stuff to be done.