Before I embark on this automobile review (a Downdays first) please allow me to establish my ski-bum bona fides. I have never owned a new vehicle—not even close, in fact. The two cars I’ve owned to date were a 1986 Honda Civic Wagovan named Dixie and a 1993 Subaru Loyale named Becky, both around two decades old when I bought them. In other words, I am a man of hand-crank windows and tape cassette players—in short, a ski bum. As such, when acquiring a motor vehicle, I have only one firm criteria: Come hell or high water, will this thing get me to the mountain in time for first chair?

It goes without saying that I don’t need the fancy electronics and special features built into today’s modern automobiles. But that doesn’t mean I wouldn’t mind test-driving one, given the chance.

As it so happened, that chance came last winter, when I got the opportunity to test the 2022 Škoda Octavia Scout for a few months during the heart of the winter season. Without giving too much away, I can tell you this much: The conveniences offered by the Octavia Scout are something that even ski bums like me can get used to. 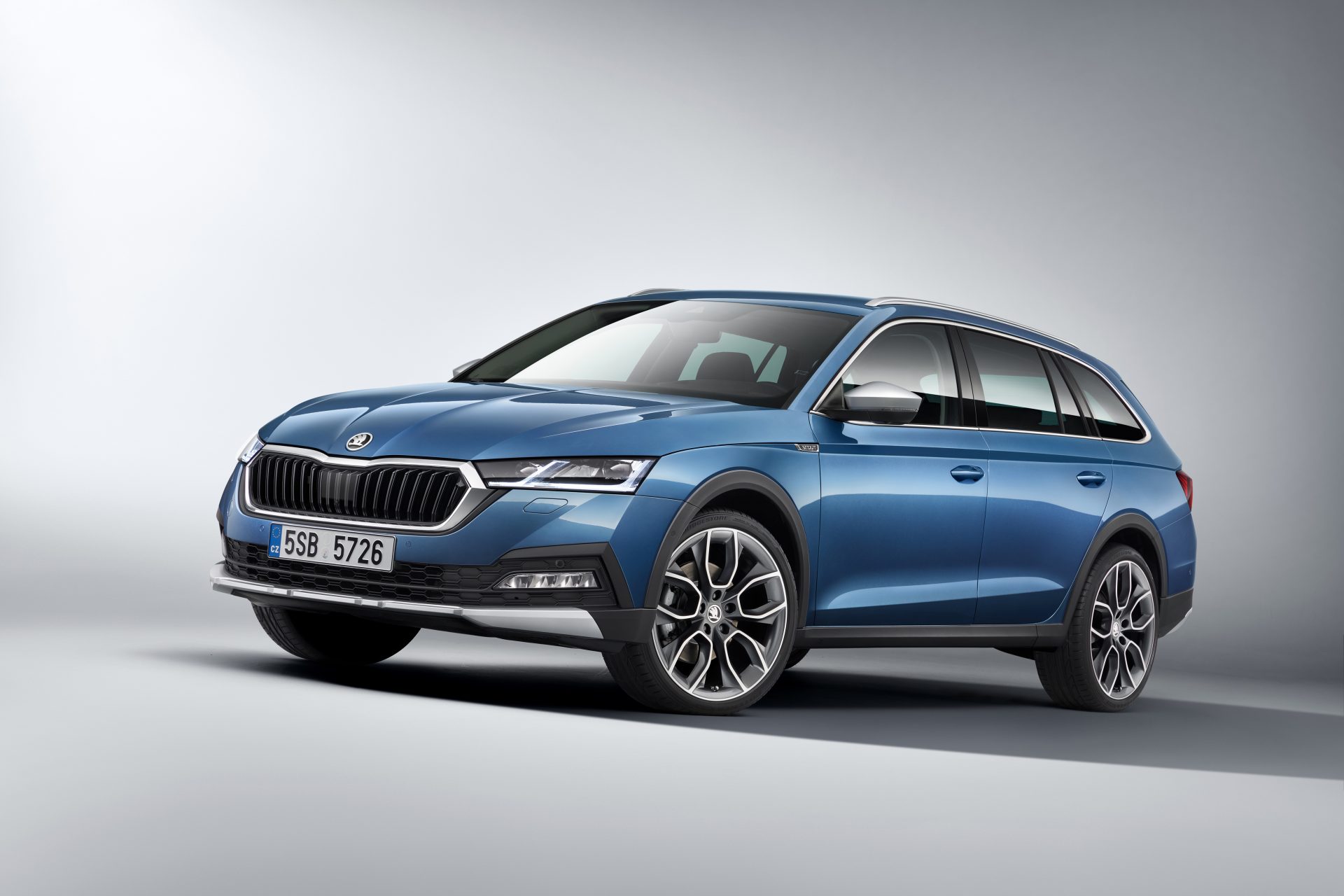 The Octavia Scout represented a slight step up from my previous vehicles. Photo: Škoda

Of all the cars out there, I was especially excited to test-drive an Octavia. There’s one simple reason for that: It’s the car that I see most often in ski resort parking lots. In North America, where I’m from, the Subaru Outback leads the pack—to the point of having become something of a meme. But here in Europe, it’s the Octavia that seems to be most trusted by outdoor enthusiasts in need of a rugged and reliable, yet affordable platform. So I was excited to see what the Octavia hype was all about, and find out for myself—is the Škoda Octavia truly the European skier’s car? 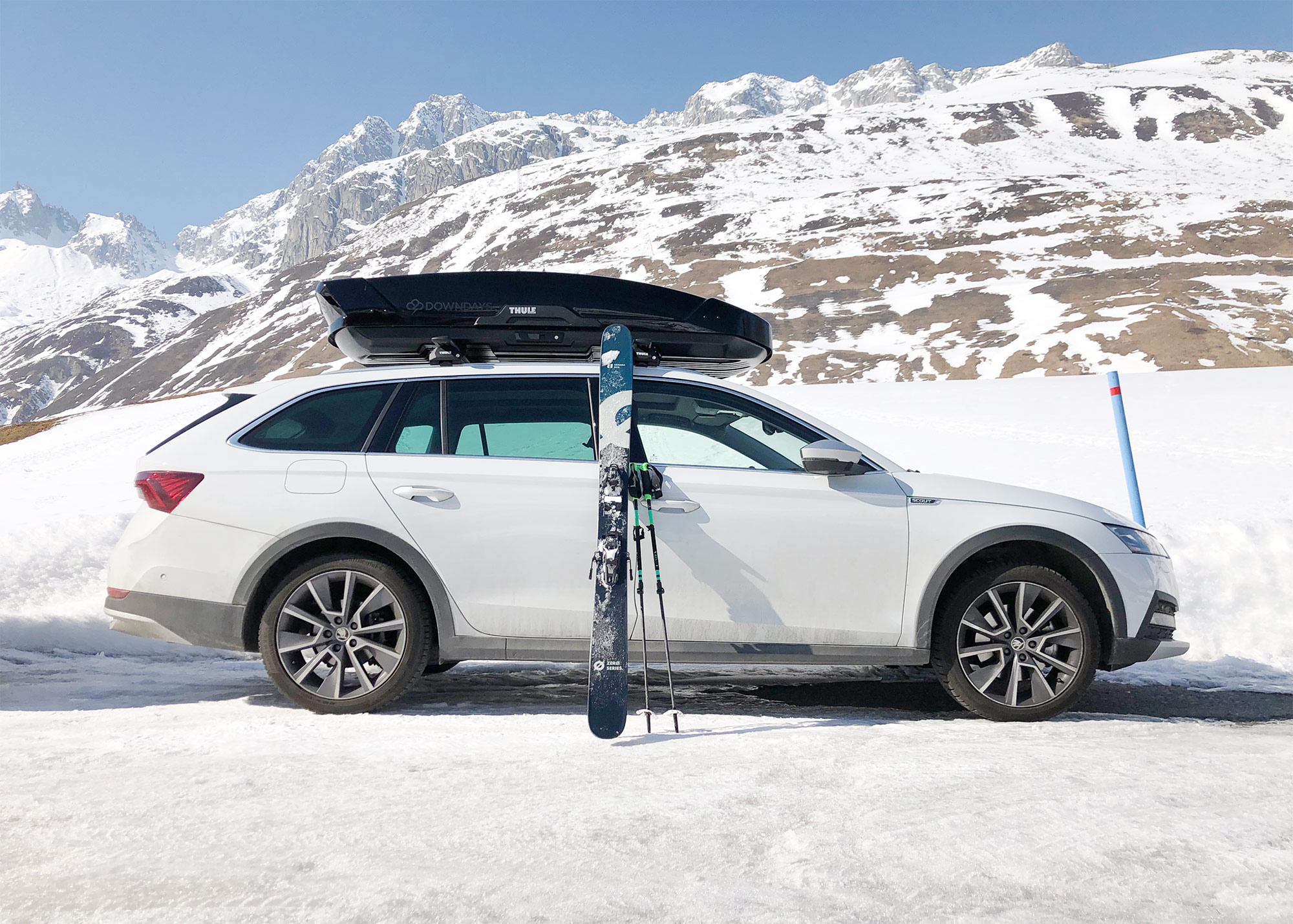 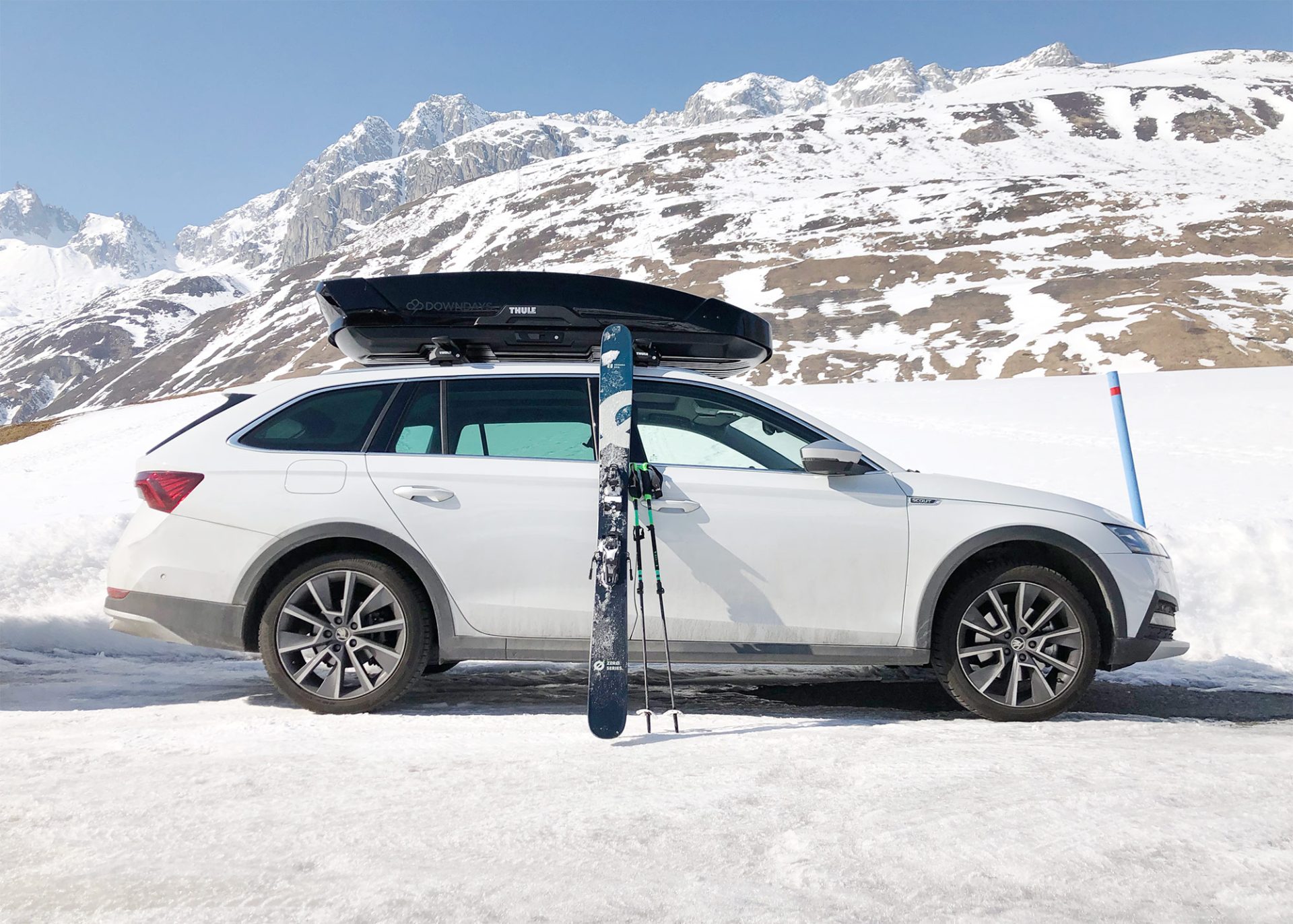 A more rugged and beefed-up version of the conventional Octavia Estate model, the Scout cuts a sporty figure at first glance. Its sleek exterior lines promise action, and its 2.0 TDI engine, extra clearance and robust all-wheel drive system back up the promise. Over several months of navigating alpine roads in all sorts of weather conditions, I never once encountered a situation that the Scout couldn’t handle. With good winter tires on, there’s not much out there that can slow you down.

Inside, there’s a generous amount of space for all your gear-schlepping needs, both in the front and back seats as well as in the rear storage area. Even your taller friends won’t feel squished in the back seats, and there’s all the room you’d need to take four people comfortably on a ski trip (a roof box for ski gear helps, of course). The interior design feels more practical than elegant, although a few extra touches—like the nearly full-length sunroof, the big touchscreen console and the faux-wood detailing—help to keep the Octavia Scout classy. 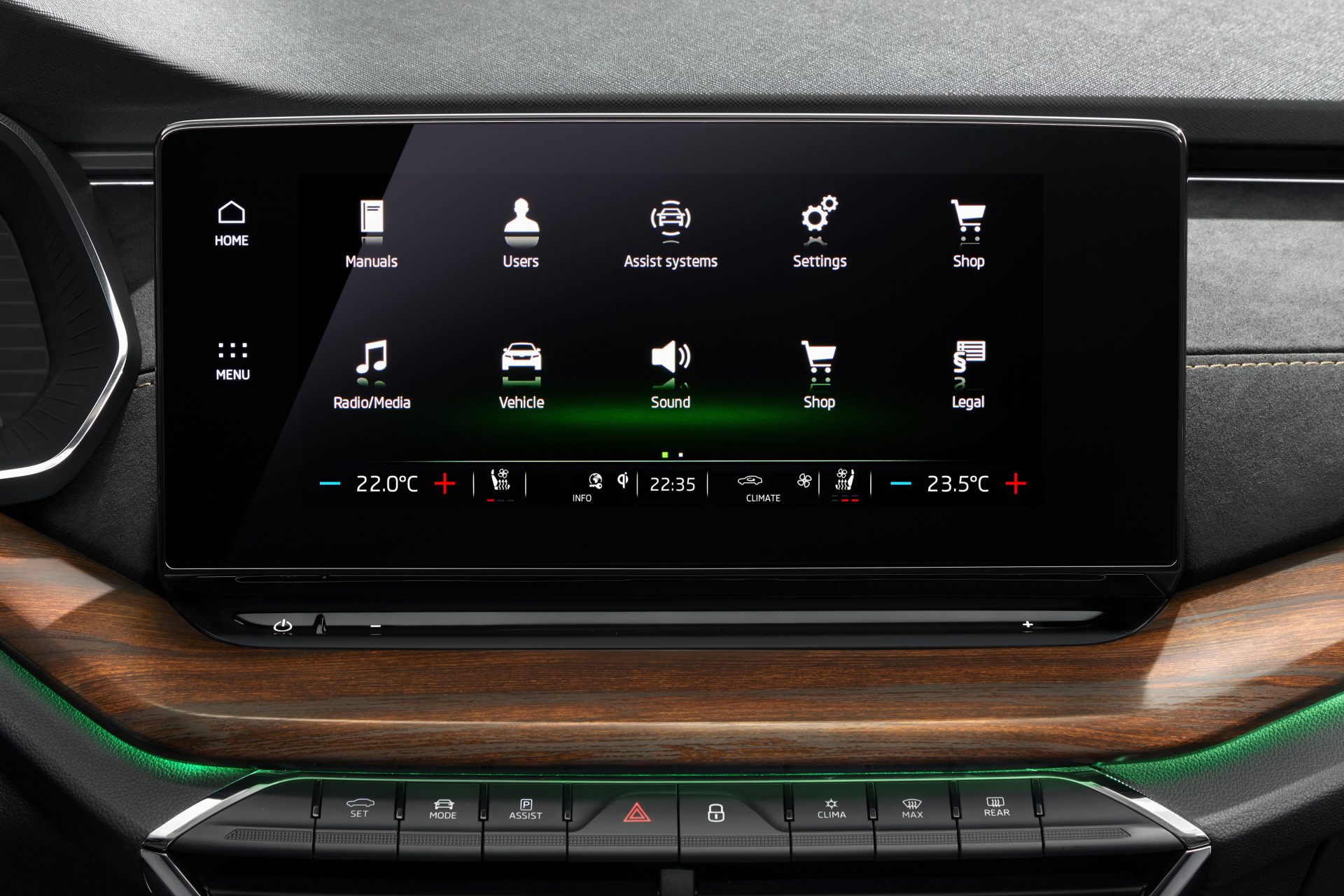 The central dashboard touchscreen display is a user-friendly highlight. 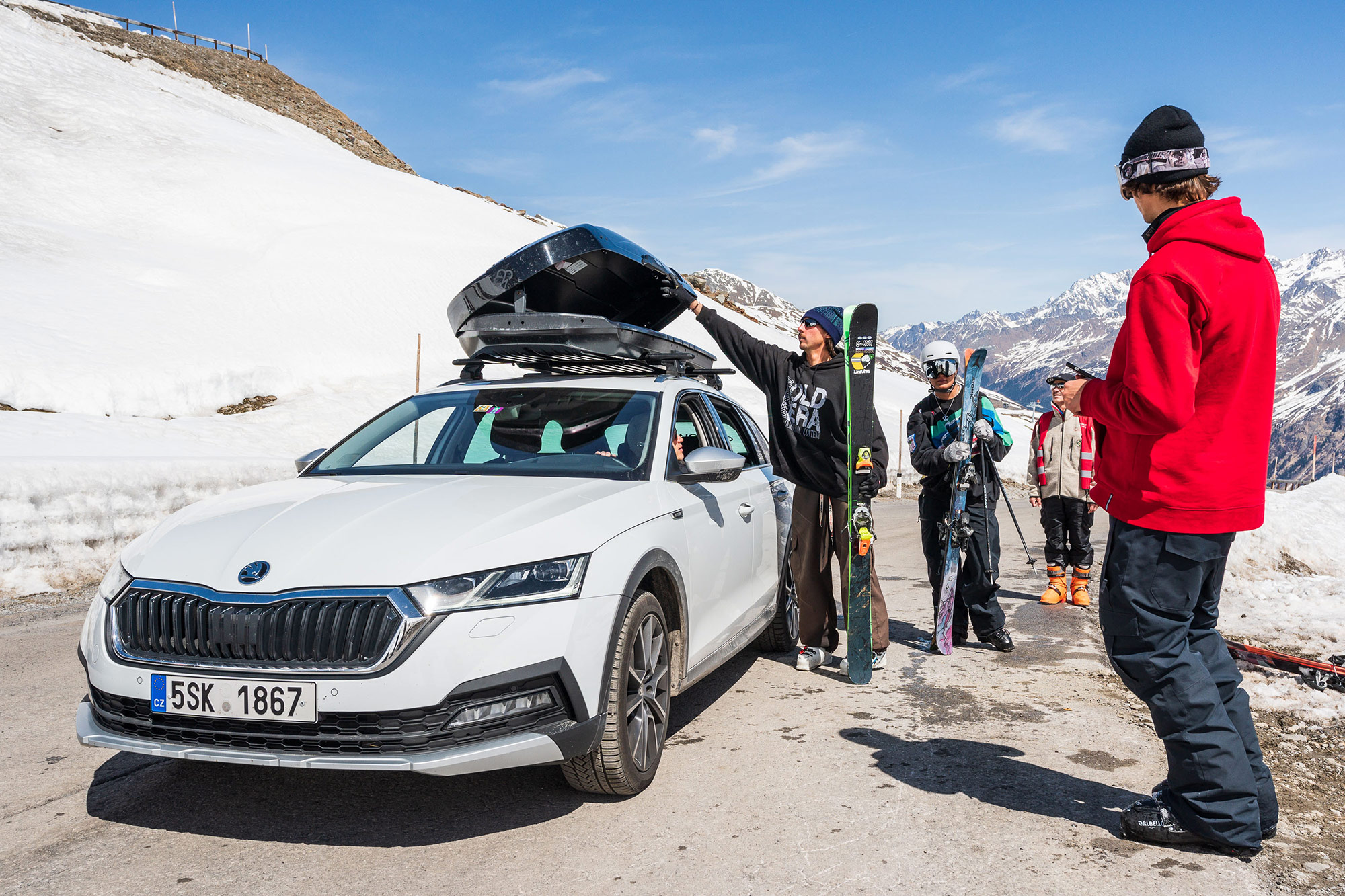 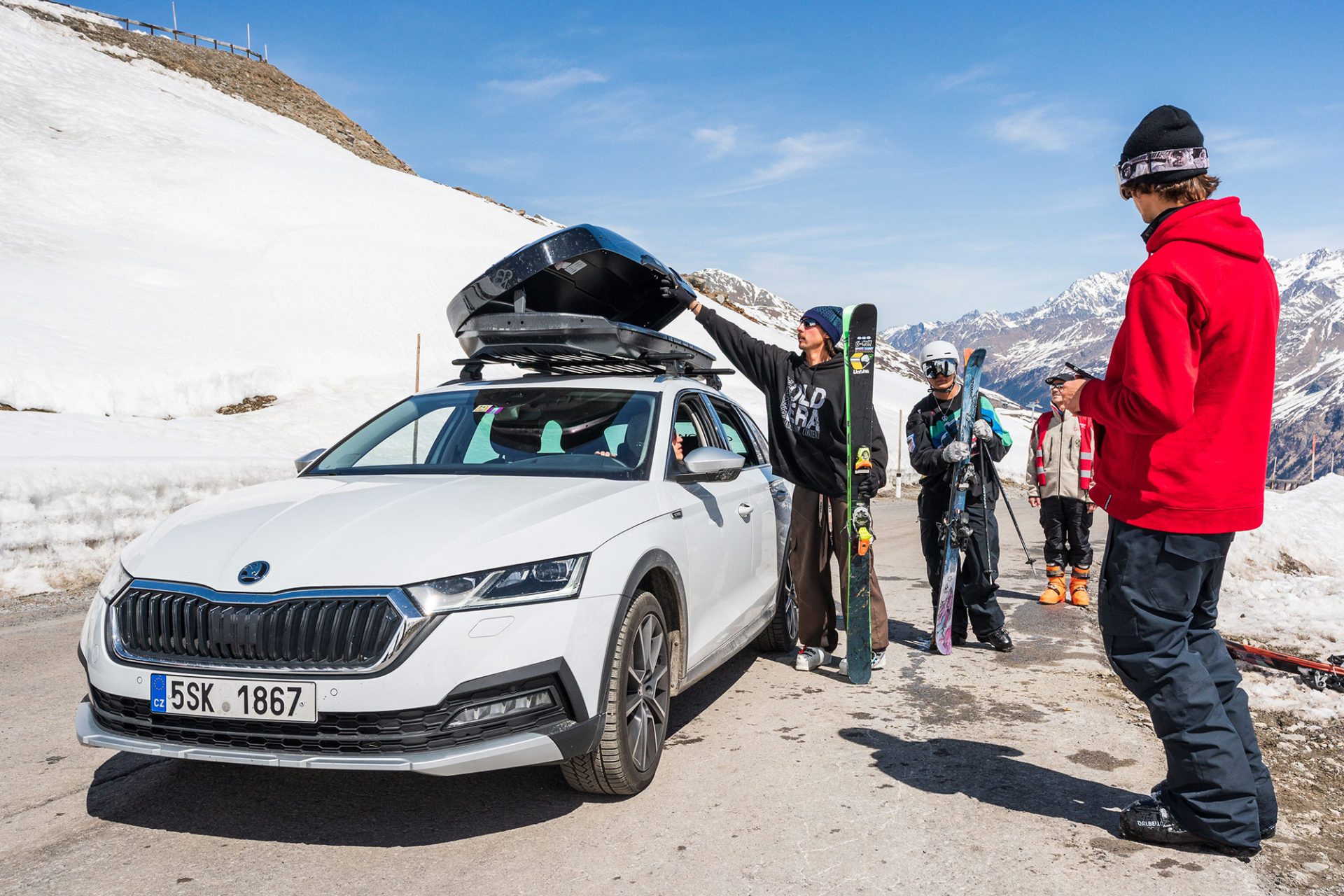 With a roofbox on top, there's plenty of room for four or even five friends, plus gear, in the Octavia Scout.

As someone who has driven old cars almost exclusively, for me the most exciting part of driving the Octavia Scout was discovering all the fancy things it can do. Let’s start with the rear back-up camera. Yes, I know these have been standard-issue for years. But when you use it for the first time, it’s still exciting and a bit disconcerting. Add in the beeping proximity indicators and visual indicators to warn you when you’re too close to something, and backing up into that tight parking spot becomes an afterthought.

The most surprising and effective technology for me was Škoda’s Adaptive Cruise Control. For those of us still skeptical of autonomous driving, this system provides a glimpse of what driving in the future will be like. The cruise control system can measure the speed of other vehicles ahead of you on the road and adjust your speed accordingly. It can read road signs, match your speed to the posted speed limit, and even slow down when there are curves coming up on the road ahead.

Coming up fast behind a truck on the highway? Adaptive cruise control will automatically slow your pace to match it, then speed up again as soon as you enter the left lane to pass. It honestly feels a bit like magic. With a few exceptions—such as in traffic jams or with unclear road signage—you can set the cruise control when you hit the highway, and not touch the gas or break pedal again until you reach your exit.

I also need to give a shout-out to the blind-spot sensor, a small but significant feature. Warning lights on the rear-view mirrors will warn you of a vehicle in your blind spot on either side, and a warning tone will sound if you try to make a lane change.

Last but not least: the heated steering wheel. When jumping into the car after a frigid day on the mountain, there’s no better feeling. Combined with the heated seats and Climatronic air conditioning, this car will get you warm, fast.

The downside: Trusting the tech

If I have any real critique of the Škoda Octavia Scout, it’s this: Computerized electronic systems are great, but they need to work with near 100% reliability in order to be better than what came before. Unfortunately, I didn’t always find that to be the case.

Take Lane Assist. This is a semi-autonomous system designed to help you stay in your lane. When it’s activated, you will sometimes feel the car steering with you into turns, or making minor adjustments when you drift close to the edge of the lane.

However, Lane Assist is neither fully autonomous nor fully reliable. It’s hard to tell when it’s going to make an adjustment. You’ll feel the car steering with you through one curve, then nothing on the next one. It will also reliably go berserk whenever you enter a construction zone, beeping a warning tone and telling you to “drive in the center of the lane,” even when you are accurately following the temporary markings. Even at its best, the system feels a bit unnerving, giving you the ominous feeling that you’re not the only one steering the car.

The aforementioned Adaptive Cruise Control is also not without its flaws. Though the system worked flawlessly for me while regulating speed with regards to other traffic, it wasn’t quite as precise at identifying the posted speed limit. While on the highway, sometimes the car would detect a non-existent speed limit that was drastically lower than the actual limit, forcing the vehicle to brake sharply. When your car suddenly decelerates from 130 kph to 60 kph for no good reason on the highway, that’s not a good thing.

My Scout seemed to have a few other ghosts in the electrical system. Sometimes the sound system wouldn’t work upon start. Other times, more scarily, the car would inform me that I’d just been in an accident, when this was clearly not the case. While this can likely be attributed to a simple electrical glitch, it’s no less annoying. If a system is really going to make our lives better and safer, it needs to work as intended, all the time.

While I’m harping on the Scout’s shortcomings, there’s one more issue that stuck with me. As soon as there’s a bit of snow on the ground, all of those fancy exterior sensors can no longer be relied upon. Adaptive Cruise Control, lane assist, blind-spot warnings: All of this immediately goes out of the window as soon as a bit of snow is added to the equation.

It does make sense: Sensors can’t read road markings that are covered in snow, and of course they can’t sense anything when they themselves are covered in a layer of ice. Even so, it was surprising how quickly all of these helpful functions ceased to be of any use as soon as the weather turned nasty. If you do a lot of driving in wintry conditions, you’ll quickly learn that you can’t rely on many of these assistance systems. 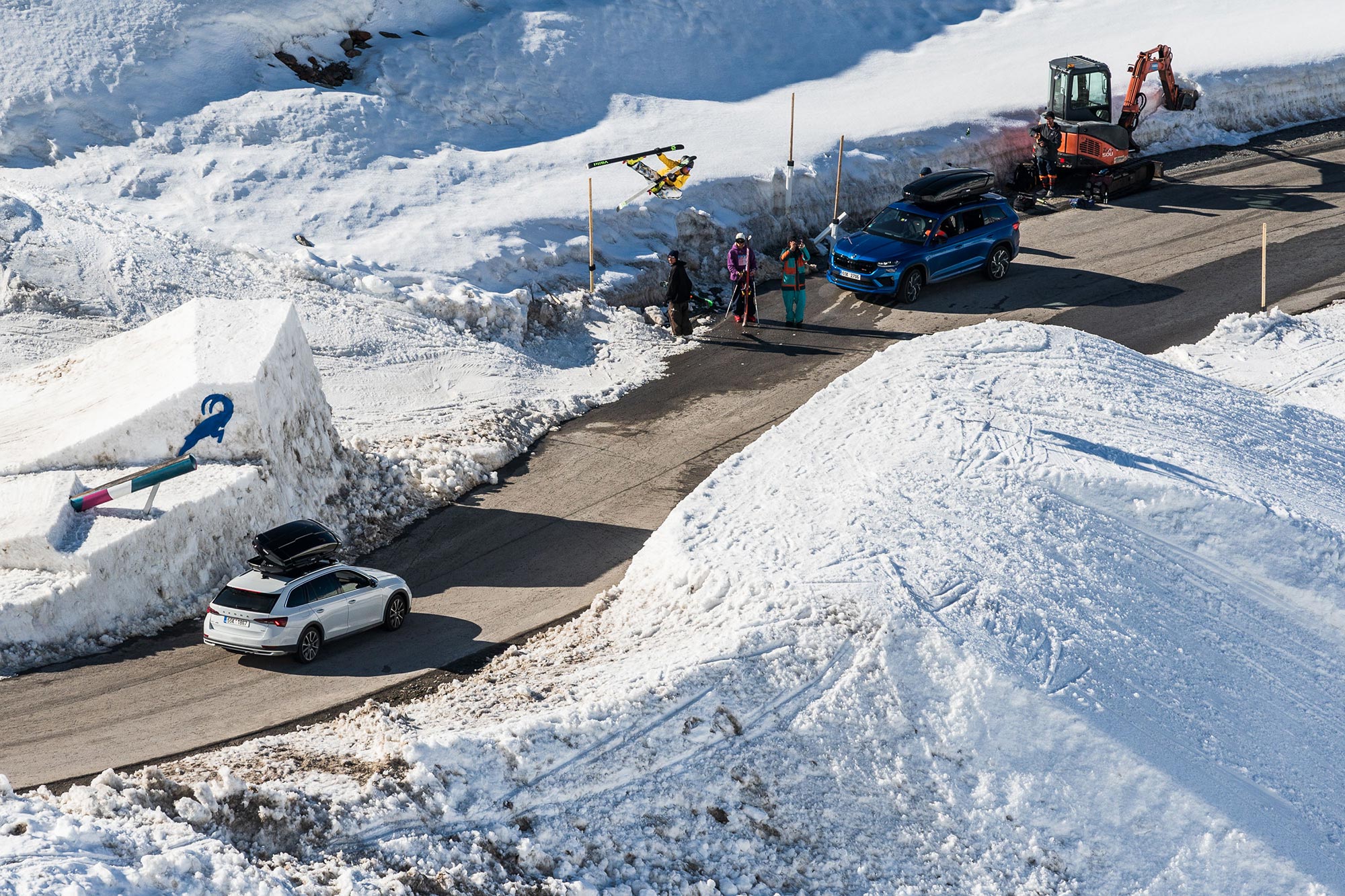 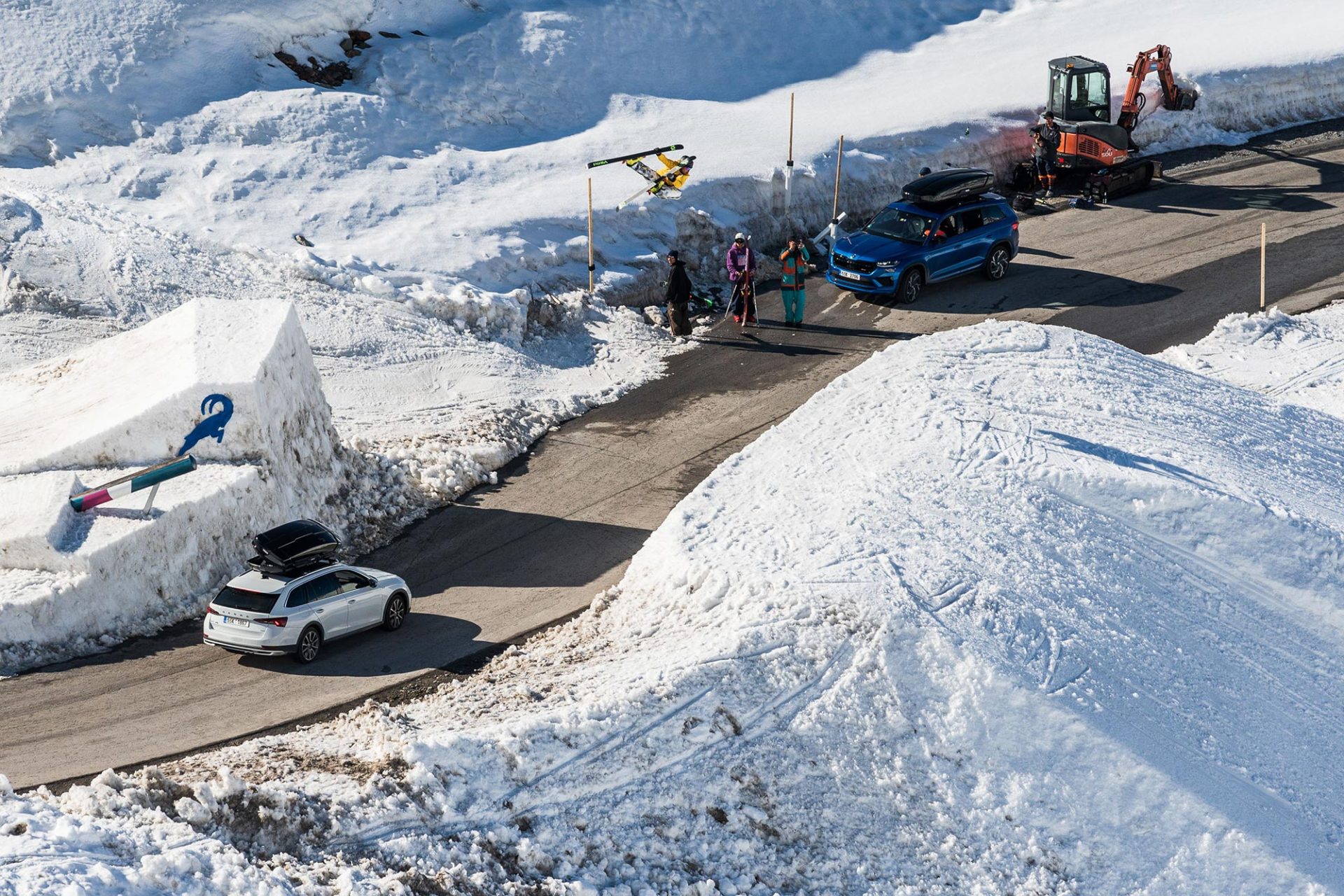 On a mountain road like this, Lane Assist isn't going to be of much help sensing the side of the road—or the skier flying overhead.

I’ve already listed some of my favorite features of the Octavia Scout, as well as some downsides. But I’ve honestly only scratched the surface of the car’s many features. Some of the other bells and whistles are more or less useful, depending on your personal preferences.

The wireless phone charging pad in the central console? Actually pretty cool, when it works. (Tip: Remove your phone case.)

The little lights on the driver and passenger doors that project “Škoda” onto the ground when you open them? Fancy, but probably unnecessary. (Although your friends will be impressed.)

The voice-activated assistant? The jury’s out on this one. Like Siri and Alexa, it’s a roll of the dice whether or not the system will understand what you’re trying to tell it. However, once you learn which voice commands it responds to, it can be quite practical. For me, it was a continual pleasure to tell the car “my ass is cold” as a means of turning on the seat heating. 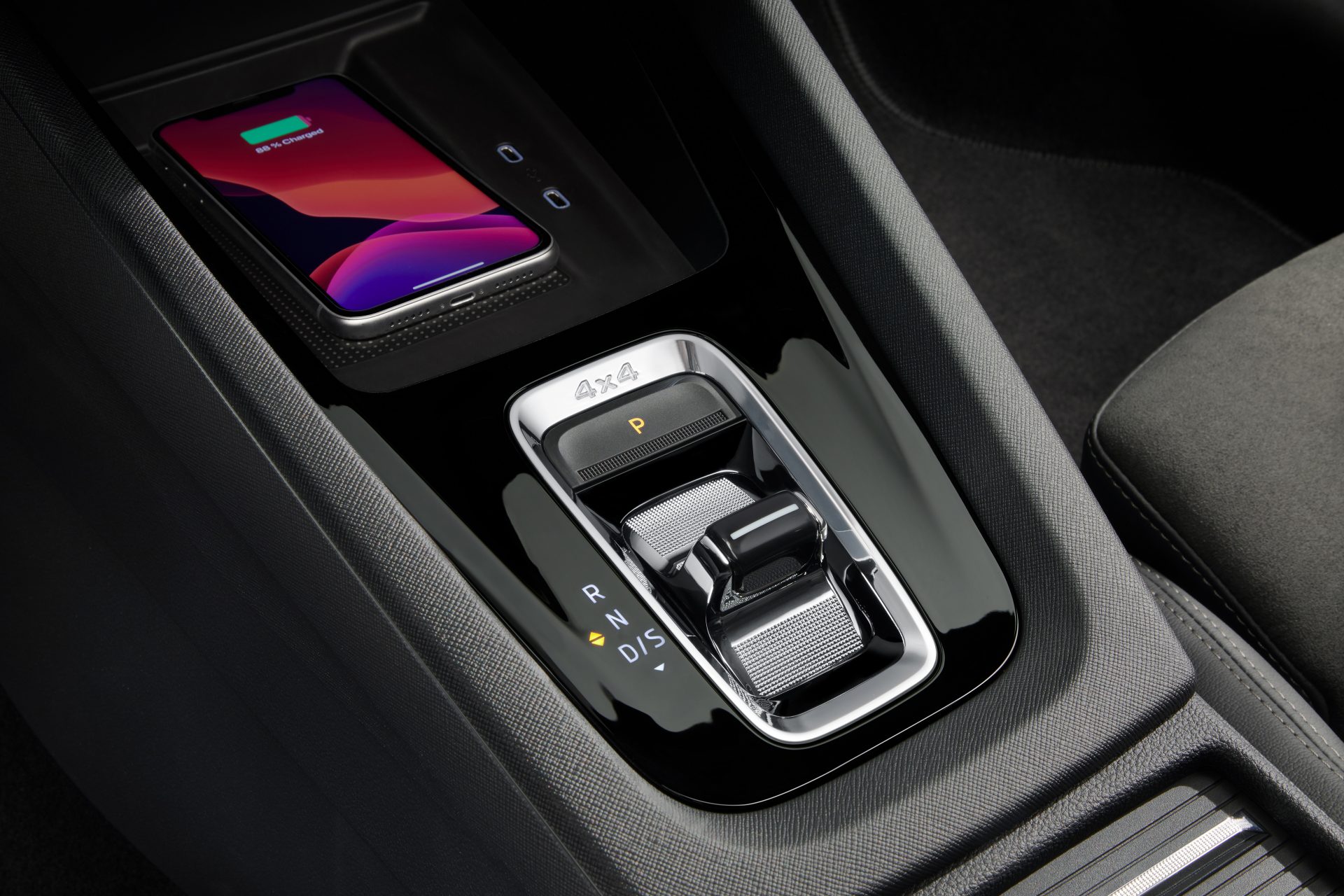 The wireless phone charging pad is a unique touch.

A savvy pick for skiers

Despite the occasional electrical or technological shortcoming, all in all I found to the Octavia to be a reliable workhorse of a vehicle, capable of handling every task I could throw at it. Though it’s not what most would consider a “sporty” car, it has more than enough power and responsiveness to make driving more than just a menial task. It’s also rugged and reliable, capable of mastering nearly any mountainous conditions. While it might lack some of the power and prestige of some other sport-focused models, it more than makes up for it in affordability. The Octavia isn’t a status symbol—it’s a tool built for everyman.

For me, that’s more than enough to prove my hypothesis. Affordable, reliable and practical, the Škoda Octavia is indeed the skier’s car in Europe. Even if some of the fancy new systems occasionally leave something to be desired, this is still a car you can rely on to get you from Point A to Point B. For a ski bum like me, that’s what’s most important.