A guy who’s everywhere in the freeskiing industry, Raf Regazzoni talks about Henrik and Phil and the behind-the-scenes work of their new two-year film project.


This is the continuation of Part 1 of our interview with freeskiing OG Rafael Regazzoni—Olympic judge, event organizer, agent and jack-of-all-trades in the freeski industry.

Keeping the spirit of freeskiing, but reaching wider audiences: is video the way to go?
Even FIS understood that they should produce more TV content. It’s getting more and more important for all of the events, both the glamorous ones and the behind-the-scene ones, and there is more and more money being put into it.

And for the kids?
With the Internet, Instagram and Facebook, even if people doesn’t want to watch more than three minutes of video, it will be possible for people to create a career around that. Someone can come from nowhere nowadays and just be good and create a career.

So people can live off freeskiing only doing video?
It’s going to arrive more in the sport. We’ll see more and more two-year movie projects and single-person projects. The two-year project to get the right footage, and the short project to get a 5- to 7-minute movie.

There are a few skiers living with skiing. Maybe twenty or thirty who can live with only skiing, and a lot of investment so if they don’t make a lot of money, they can still live with it. Some are stars like Sean Pettit, who’s famous because of what he does in the movies. He is one of the few.

As an athlete agent, how do you deal with that ?
The only video-only guy that I manage is Phil, because Henrik is still competing. It’s not as easy as a normal skier to sell out, especially in the mainstream industry, because honestly our industry doesn’t have the resources for the riders and productions that it used to have, and the market is going down. 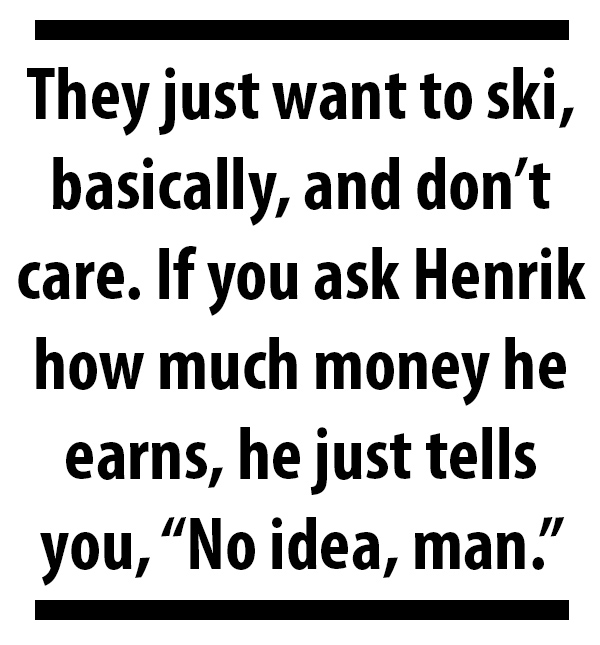 You have to try to reach other audiences and try different approaches like music, food, energy drinks or action cameras. Everything is based on what he will film and the edits he will drop. It’s only based on the views and the image, and it’s harder because you don’t reach a wider audience than the freeski industry. With someone who does competitions, you can reach outside of it.

What do Henrik and Phil represent for the freeskiing industry?
They are two of the most influential skiers of our time. It’s easy to say that because I work with them, know them and like what they do but, if you look around, there are only a few like them. The only ones who have touched everyone are Candide Thovex, and then there are people like Tanner [Hall] and [Tom] Wallisch, and then these two guys. They’ve influenced all the kids with their style and way of life. You can see that in a lot of edits and events. What they’ve created has been taken in by skiing.

They are doing it their own way. They are very unique, smiling to everyone and having fun all day. They went on a movie tour for more than twenty stops in a van, going to talk directly with their audience, even in tiny places in Minnesota. No one is doing that.

They don’t forget that it’s only skiing, and it’s nothing more than that. They just want to ski, basically, and don’t care. If you ask Henrik how much money he earns, he just tells you, “No idea, man.” The only thing he wants is to have enough to pay for travel and tickets. After injuring his shoulder, the first thing he did was go to the glacier. Phil is the same. Normal people might say that they aren’t the best representatives of the sport because of the way they look and talk. But what’s most important is not to have fake speech, but to be real all the time.

What’s going on behind the scenes with their movie?
Right now they aren’t alone, there is a big man behind them, Eric Iberg. He has done a lot of projects with Poor Boyz, Pep [Fujas], [Eric] Pollard, Tanner [Hall]. When you do a project like this, you need a leader like Eric doing the scheduling, the music rights, the visuals, the graphics, the budgeting. You need someone to manage the whole project.

Then you organize the season. Phil follows the snow and does what he wants to do, because he has no calendar beside the B&E Invitational and a couple other things at the end of the season. Henrik plans his season between the competitions and they combine these two schedules. It’s all based around what they want to do, and on Henrik’s competitions.

[In a two-year project] you see what you have after the first year, and then you have to plan the teaser, the promotion, and that’s where I’m involved. This first season, Henrik competed at Dew Tour, got some bad snow in British Columbia, and then injured himself at X Games. Phil continued to ski and got a lot of shots, so after the first season, one got a lot and the other one not so much. A two-year project is good like that because you can still have a strong project based on what you can still get. After next season, there will be two months of editing with people outside the crew, even if the main editing is done by Henrik and Phil.

How can you make a movie special?
Tricks are really important. You can have the best production, the best scenic shots, the biggest budget, but if you don’t have the bangers, then it doesn’t work. You need something that normal skiers can relate to, and not only have exclusive features that nobody can ride. You need to be close to your audience, like skiing is something everyone can do, but kill it in your own way.

You need something big, something unique and also the music—I feel like some movies forgot about that. It’s not about the taste, but the flow. Gpsy Feelin are the only ones right now doing that.

Having a combination of exclusive shots is important, because nowadays if there is a new trick coming up, it will be on Facebook and not in the movie. We used to see the bangers in competition or in movies. If you keep the secret, your movie is different than the others. For example, the footage in the teaser will not be in the movie. They don’t even show their spots on Instagram. We know it’s important to have sponsors, it’s important to drop a lot of content, but there is a way to say “stop”.

There is a race about who has the best camera, but not who films the best with it, and I think that’s a problem. Having to think about the beauty of the shot, and also the brand visibility in it, makes you forget the essence.

Henrik and Noah [Albaladejo] just dropped a sick edit with almost no big tricks. The second part is based on a mini playground in wild terrain and a lot of people shared it, just because it makes people happy that these guys are showing how they like to ski.