Slopestyle season ends with a bang in Corvatsch

Slopestyle season ends with a bang in Corvatsch

Sunny skies, a pristine course and plenty of positive vibes to go around: The 2021/22 World Cup season ended on a high note last weekend with the slopestyle contest in Corvatsch, Silvaplana, Switzerland.

Ever since freeskiing went Olympic back in 2014, Olympic seasons are always the busiest and most stressful ones for the world’s top dogs in slopestyle, big air and halfpipe. After the long build-up reaches its climax at the Games, a tangible sigh of relief can be heard around the world as the world’s best can finally get back to what they enjoy the most: shredding park with friends, with a huge weight off of their collective shoulders.

The last few contests of the winter are squeezed into the schedule, almost as an afterthought. With the pressure of the Olympics behind them, the field of competitors can afford to relax and enjoy themselves. Of course, the season’s final contest is when the release valve finally blows fully open: the grueling contest grind is at an end for now, and it’s time to party.

Such was the setting in Corvatsch last weekend as the World Cup circuit rolled into town. Blazing blue skies, a well-sculpted course and of course, the aforementioned festive atmosphere made for a memorable contest and some of the best slopestyle action of the year.

After Thursday’s qualification round narrowed the field to eight, the freeski women’s category kicked off the finals on Saturday. The finalists included mostly known slopestyle threats like Kelly Sildaru, Mathilde Gremaud and Tess Ledeux, with up-and-comer Kirsty Muir also breaking into the top eight and Austria’s Lara Wolf as the surprise finals entry. After a rough crash during training, Sandra Eie pulled out of the finals, leaving seven women to contest the podium.

In the first run, local favorite Mathilde Gremaud got off-balance on a left cork 720 on the first jump and had to scrap her run, while Katie Summerhayes bobbled a K-fed on the first rail and scored in the mid 60s. Tess Ledeux came out swinging with the day’s first big run, stomping her jump combo clean: switch left 1080 japan, switch right 900 safety, left double cork 1260 mute. 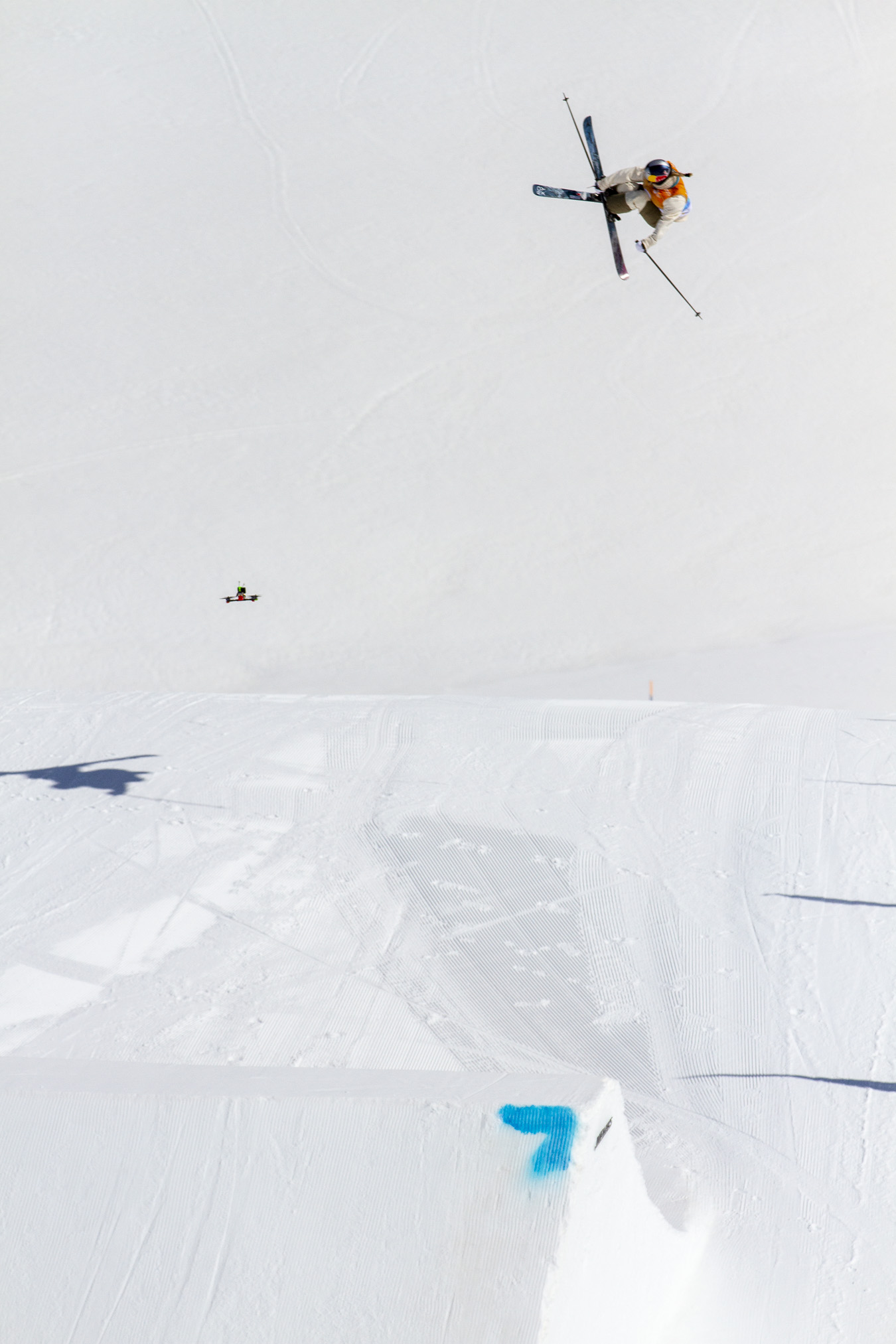 Once her signature big air trick, the left double cork 12 mute is now Tess's bread and butter on any slopestyle course that will allow for it. Photo: Ethan Stone

Kirsty Muir responded with a double cork 12 of her own—the only woman besides Tess to throw a double 12 in this contest—but crashed on the last jump, and the ever-reliable Johanne Killi put down back-to-back switch 10s for a low-70s score. Lara Wolf showed off an impressive ability to cap blunt in her spins but struggled on the execution, and Kelly Sildaru closed out the first run with the precision and reliability that’s become her trademark. A clean top section followed by a right 900 tail, switch left 720 mute and switch right 900 tail netted top qualifier Kelly the top score in the first run, an 88.25, trailed by Ledeux and Killi. 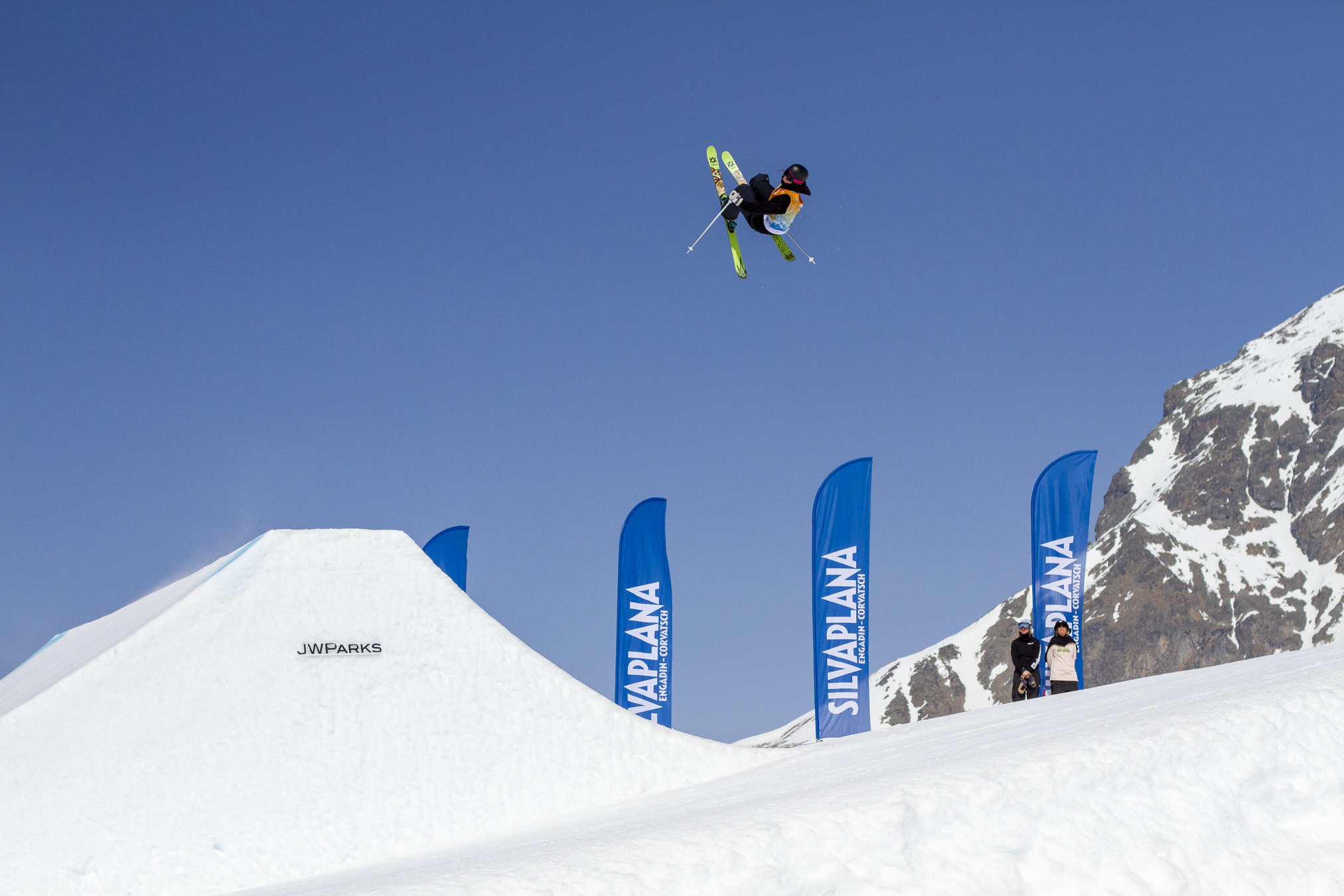 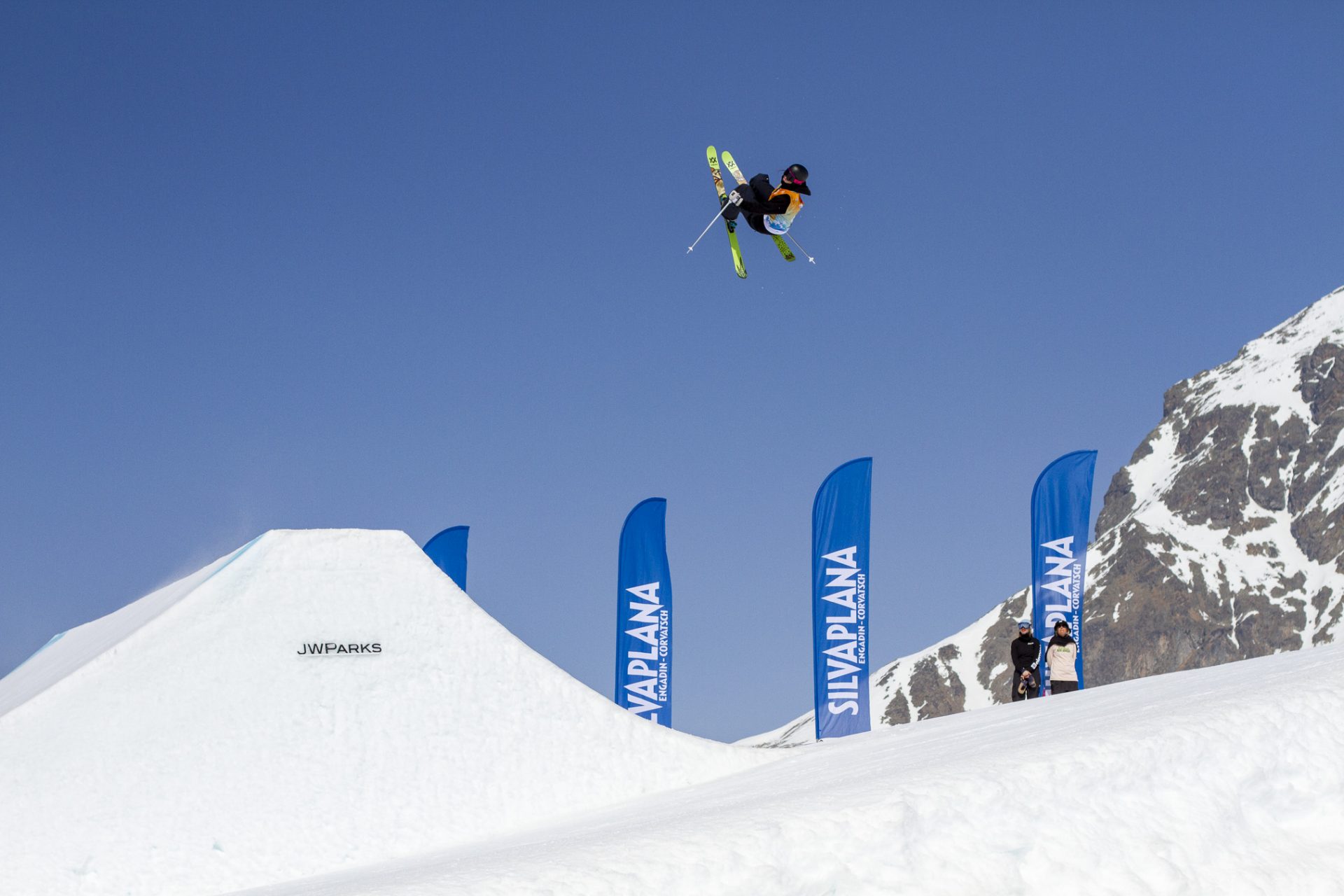 Kirsty Muir was the only woman besides Tess to throw a double cork 12, but she struggled with her usually solid switch misty 900. Photo: Stone

Leading off the second run, Mathilde Gremaud again struggled to nail her run, going a bit too deep on her switch 360 to butter 180 on the side-hit jump feature and calling it a day afterwards. Katie Summerhayes improved her score to a 76 to bump into third place, but was quickly replaced by Johanne Killi, who defended her spot on the podium. Lara Wolf again struggled to get a clean run down, but impressed nonetheless with a switch misty 900 mute that was tweaked harder and grabbed longer than any other trick in the finals.

As it turned out, besides the quick battle between Summerhayes and Killi for third, the scores from the first run held out to set the podium: Kelly Sildaru cruising to an apparently easy win, with Tess Ledeux in second and Killi completing the podium. 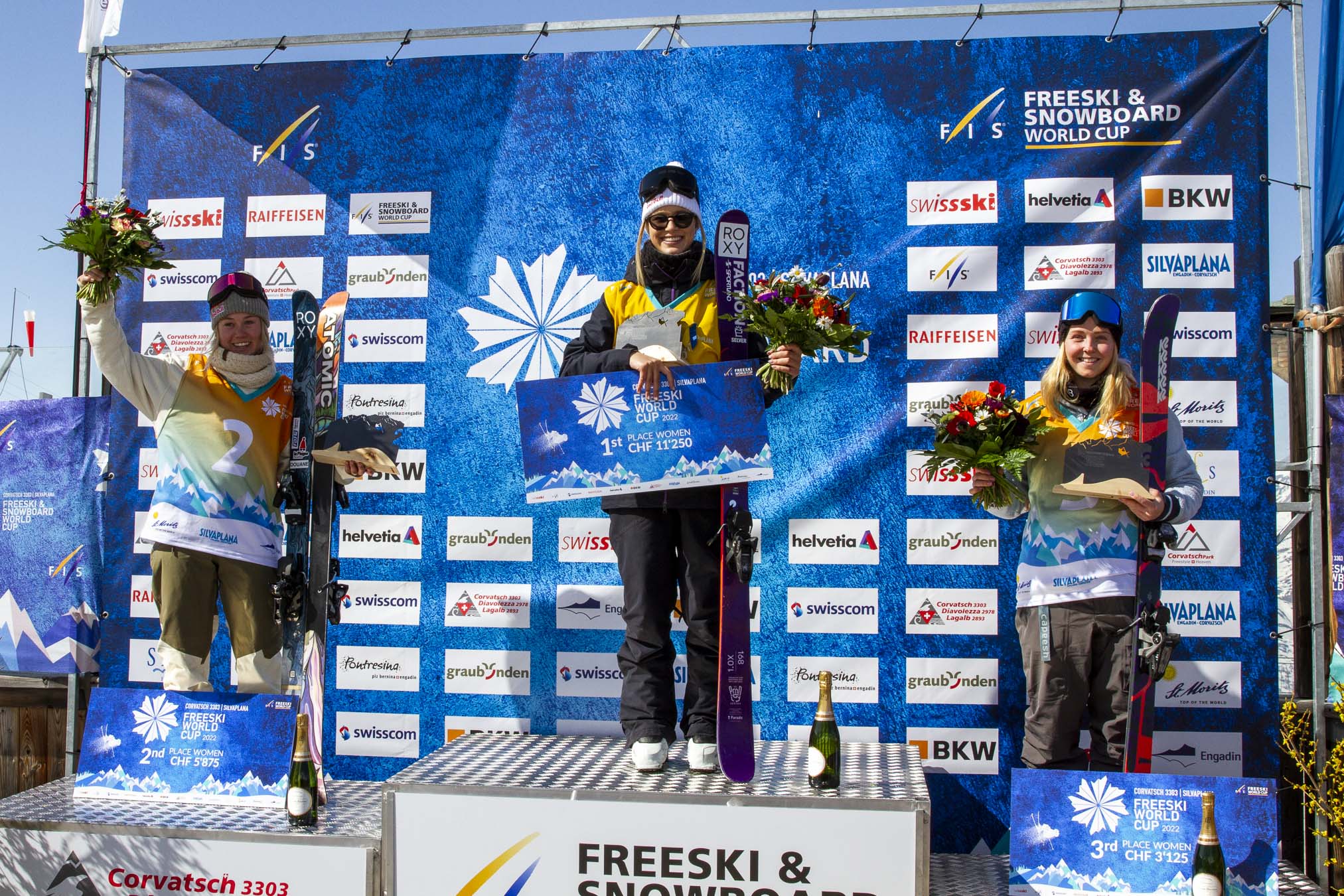 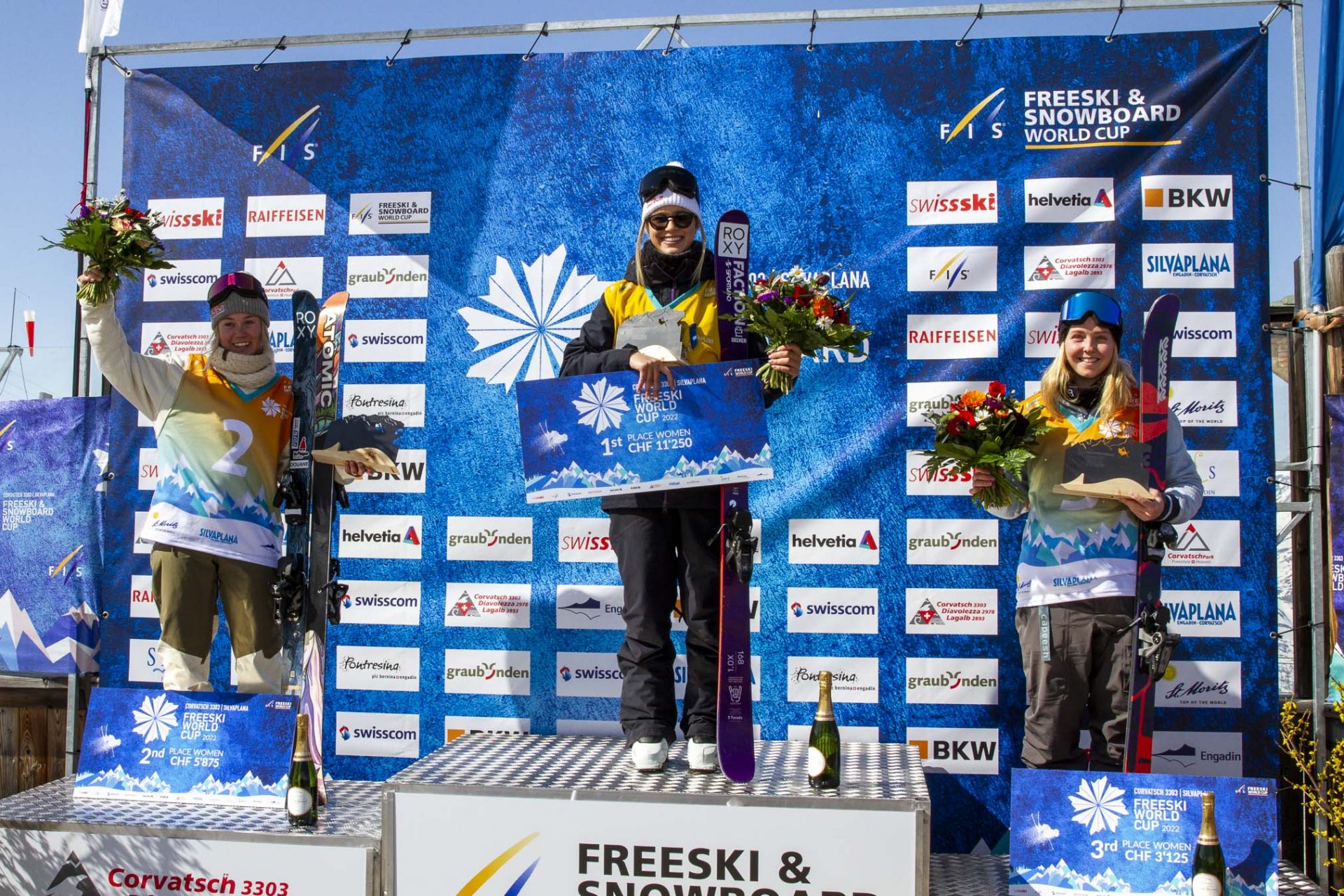 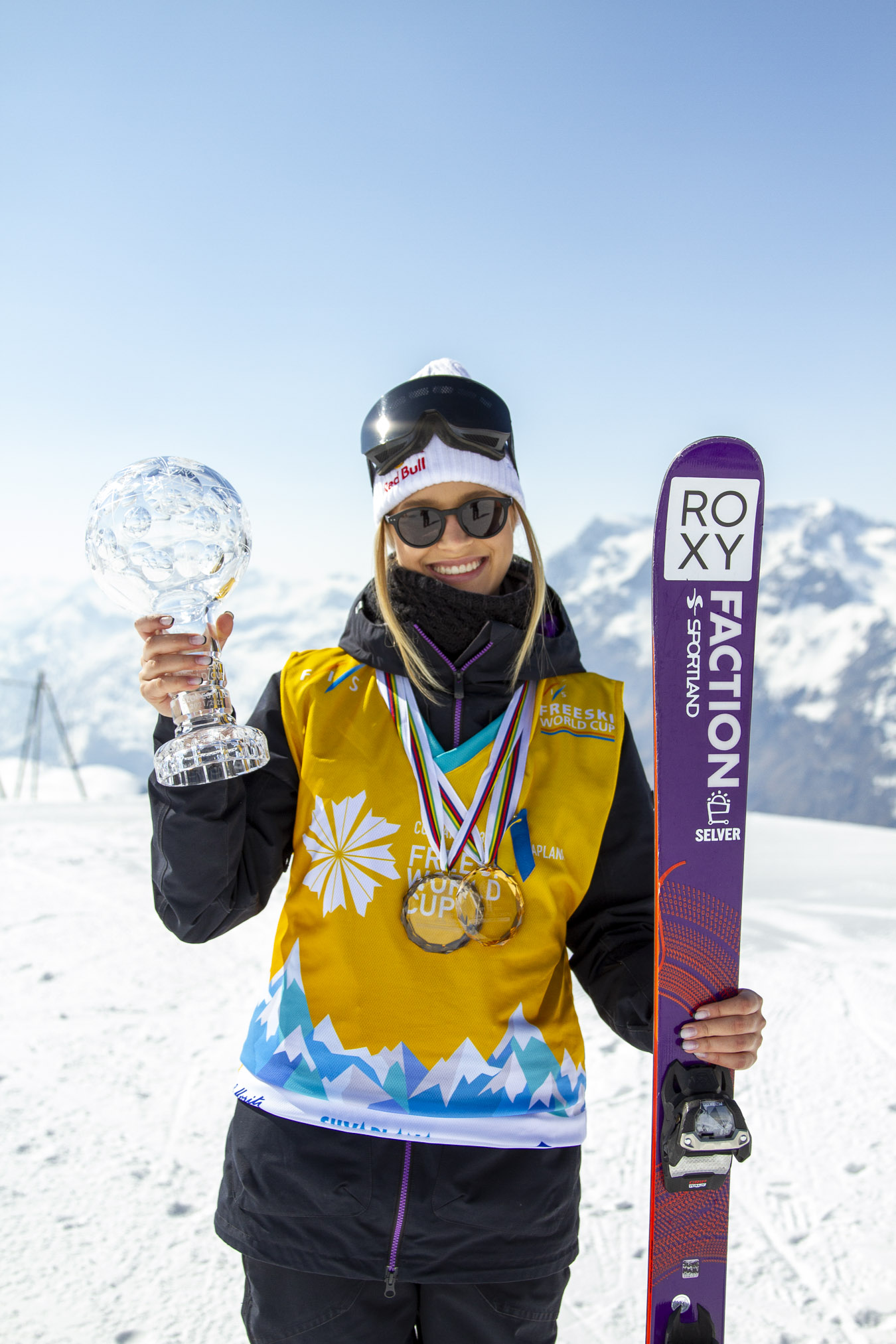 Kelly Sildaru's won a lot of things, but this is her first crystal globe. Photo: Stone

Sixteen top slopestylers showed their stuff in the men’s finals. Despite being nearly universally praised as one of the best courses of the season, the Corvatsch slopestyle still proved itself a challenge. The high elevation and length of the course had competitors gasping for air at the end of their runs, and the course’s final rail tier—aptly named “the dragon slayer”—proved itself to be a formidable obstacle for tired legs.

Evan McEachran opened up the men’s contest with a bang, swinging for the fences with four doubles and a switch left 1800 mute, but a bit loose on the execution. Spain’s slopestyle phenomenon Javier Lliso put down his run probably about as clean as he can and was rewarded with an 85.5, a very respectable score that wouldn’t be anywhere near the podium on this day. 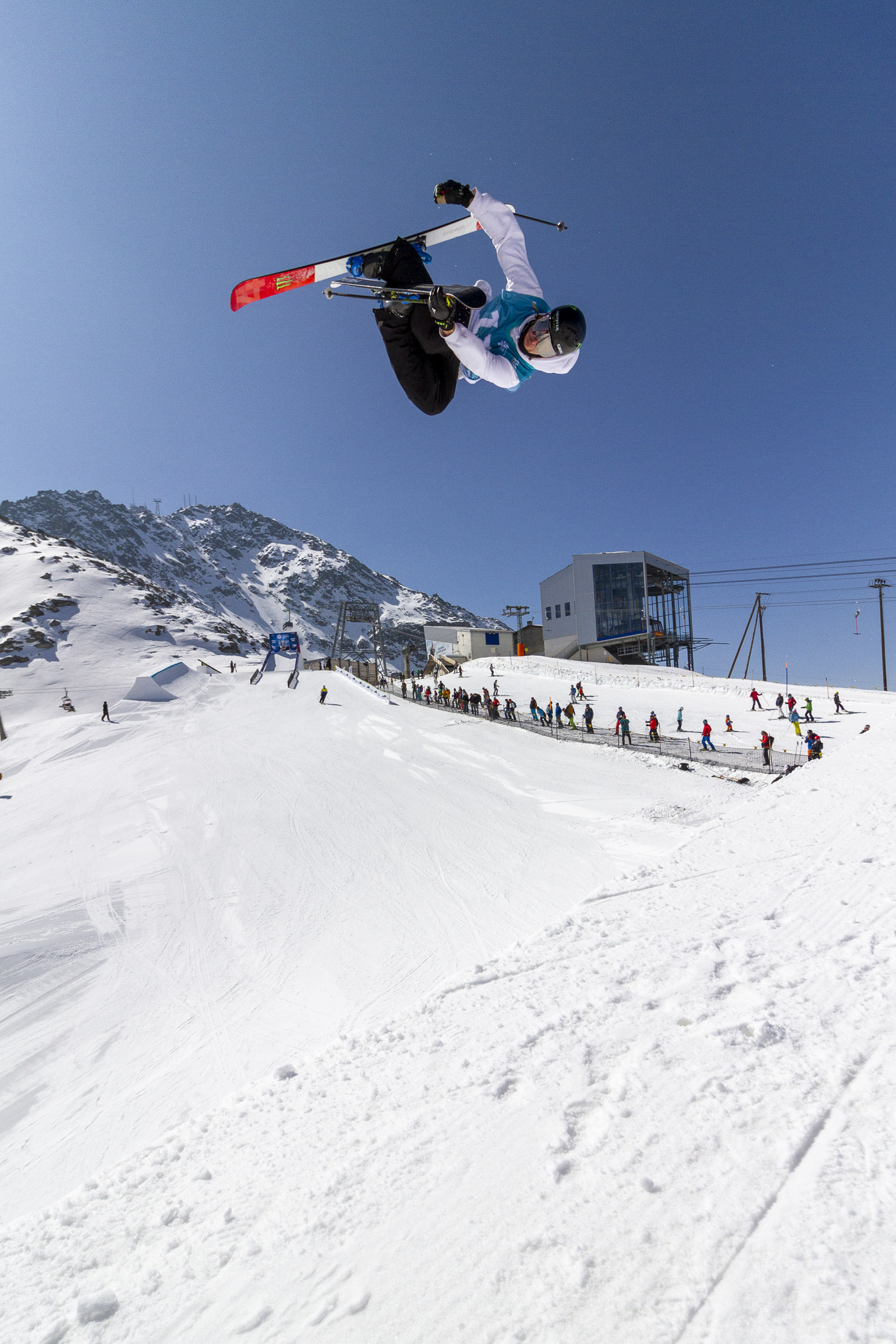 Evan McEachran came out chomping at the bit, but was a bit too loose to get onto the podium. Photo: Stone

Four crashes or missed tricks followed from Chris McCormick, Tormod Frostad, Eirik Saeteroy and Max Moffatt, before Oliwer Magnusson stepped up with a clean run including back-to-back forward double 1440s and a big back 810 out of the final rail. The Fabian Bösch show followed, as the local favorite pulled out all the stops with a massive switch front flip on the quarterpipe, a switch left double 14 and a right triple 1620 on the last jump, a trick that’s somehow become standard for Fabian. Despite the high energy of his run, the judges placed Fabian in third. 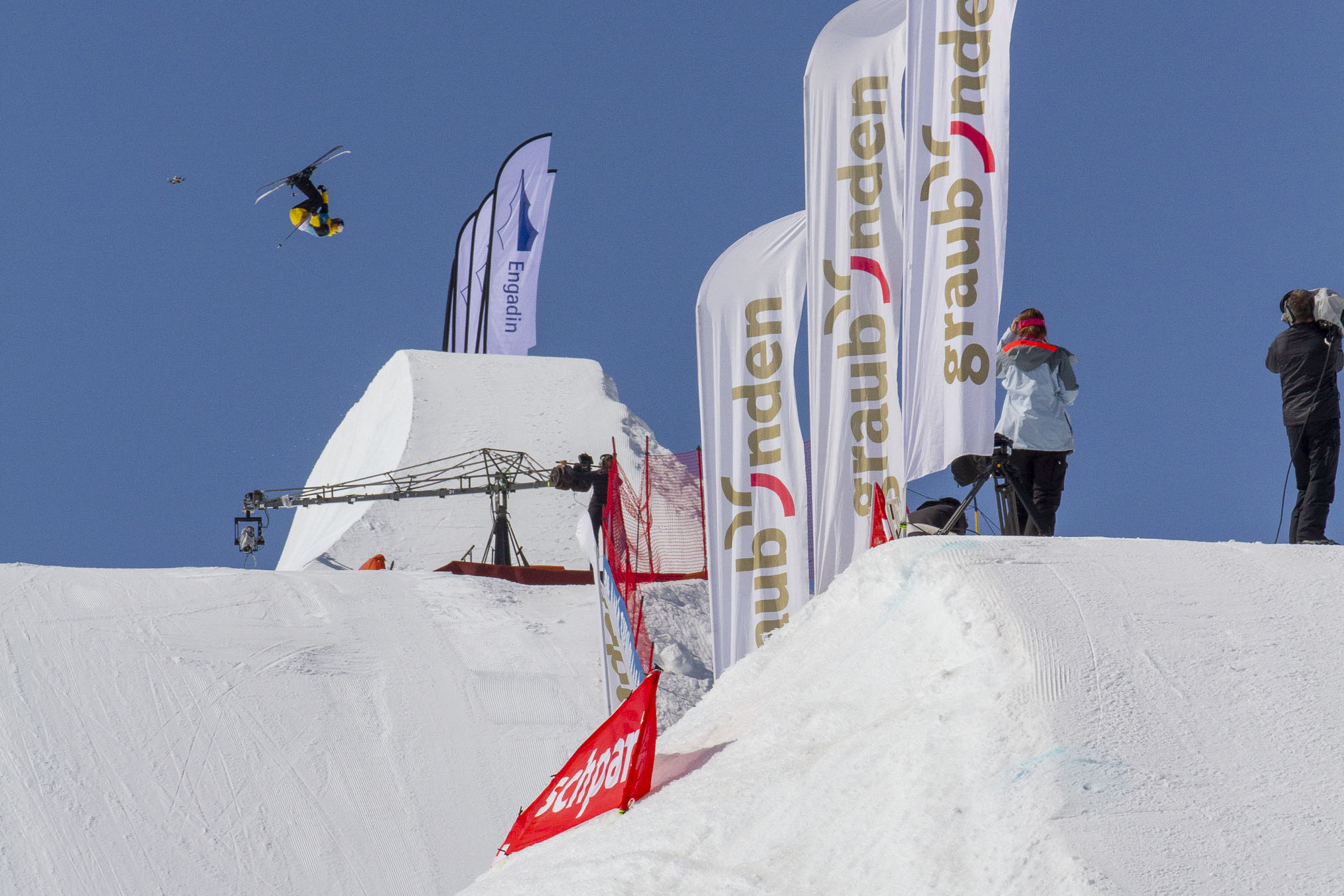 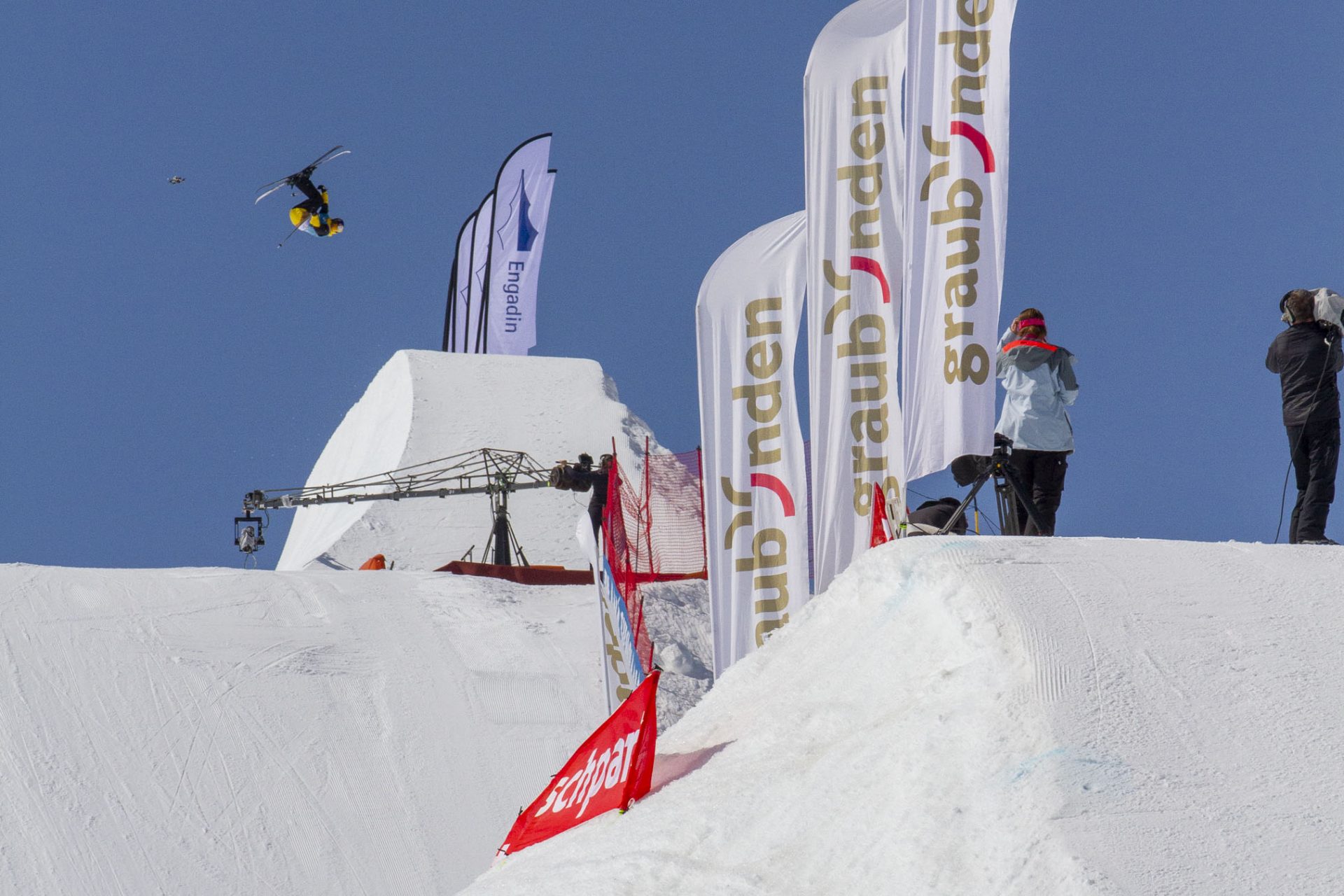 Fabian Bösch's run had a lot of "wow" factor, including this huge switch front flip on the quarterpipe. Photo: Stone

Mac Forehand served up a banger, with a rightside lip 450 on to the DFD to kick things off, clean doubles in all four directions in the jumps, and a front swap, back 450 on the final gap rail to seal the deal and break into the 90s with a score of 91.75. Hunter Henderson, Sebastian Schjerve and Alex Hall all ran into trouble in their runs, while Christian Nummedal landed in the mid-80s and Lukas Müllauer bobbled the last rail. 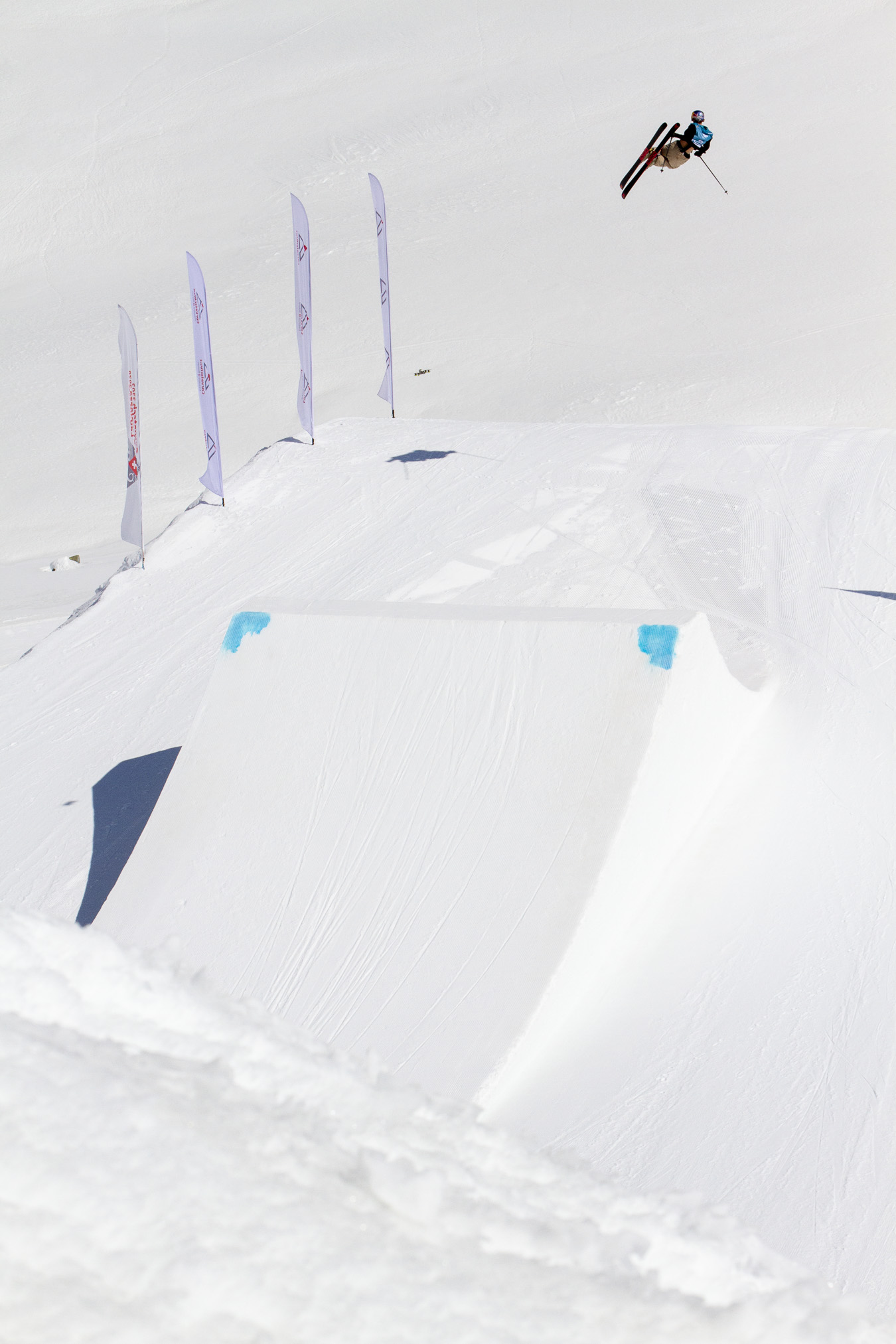 Run 1 ended with the top two qualifiers, Andri Ragettli and Birk Ruud, going blow for blow. Ragettli laced his run clean, linking a left double cork 1620 tail into a switch left double misty 16 safety to score an 88.5. But Ruud, going absolutely massive, showed off the skill that earned him the top qualifying spot: a huge switch right double 1440 mute into a switch left double 1620 blunt, straight into a jaw-dropping left double bio 1800, mute grab tweaked to infinity. Score: 94.5. Birk’s huge double bio spins have been around for a while now, but let me tell you, it’s a spectacle best seen in person. Regardless where you stand on “spin to win” tricks, this is a banger through and through. 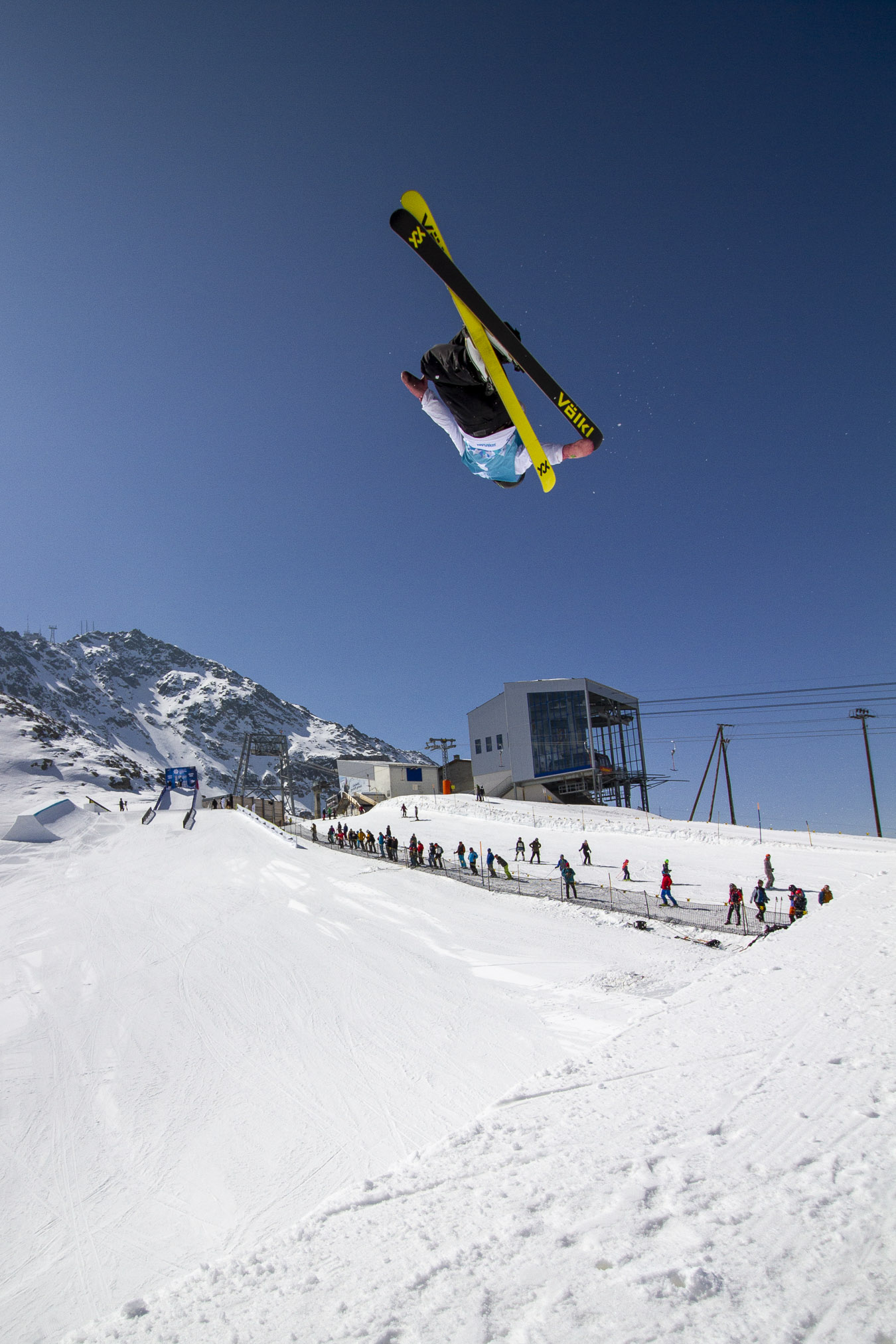 Birk Ruud's performance was near-flawless on every feature, like this huge right cork 900 tail on the QP. Photo: Stone

You’ll allow me to be concise on the men’s second runs. After struggling earlier, Chris McCormick and Tormod Frostad both put down clean runs. Fabian Bösch hammered out his run again but didn’t improve. Sebastian Schjerve landed a slippery-smooth run capped off with a big back 810 safety out, earning a lot of love at the bottom of the course and a fourth-place score. After screwing up the first rail, Lukas Müllauer send a memorable double front flip to the absolute bottom of the second jump. Ragettli upped the ante on his run with a misty 810 on the last rail, improving his score slightly but still not coming close to Birk’s dominant first run. 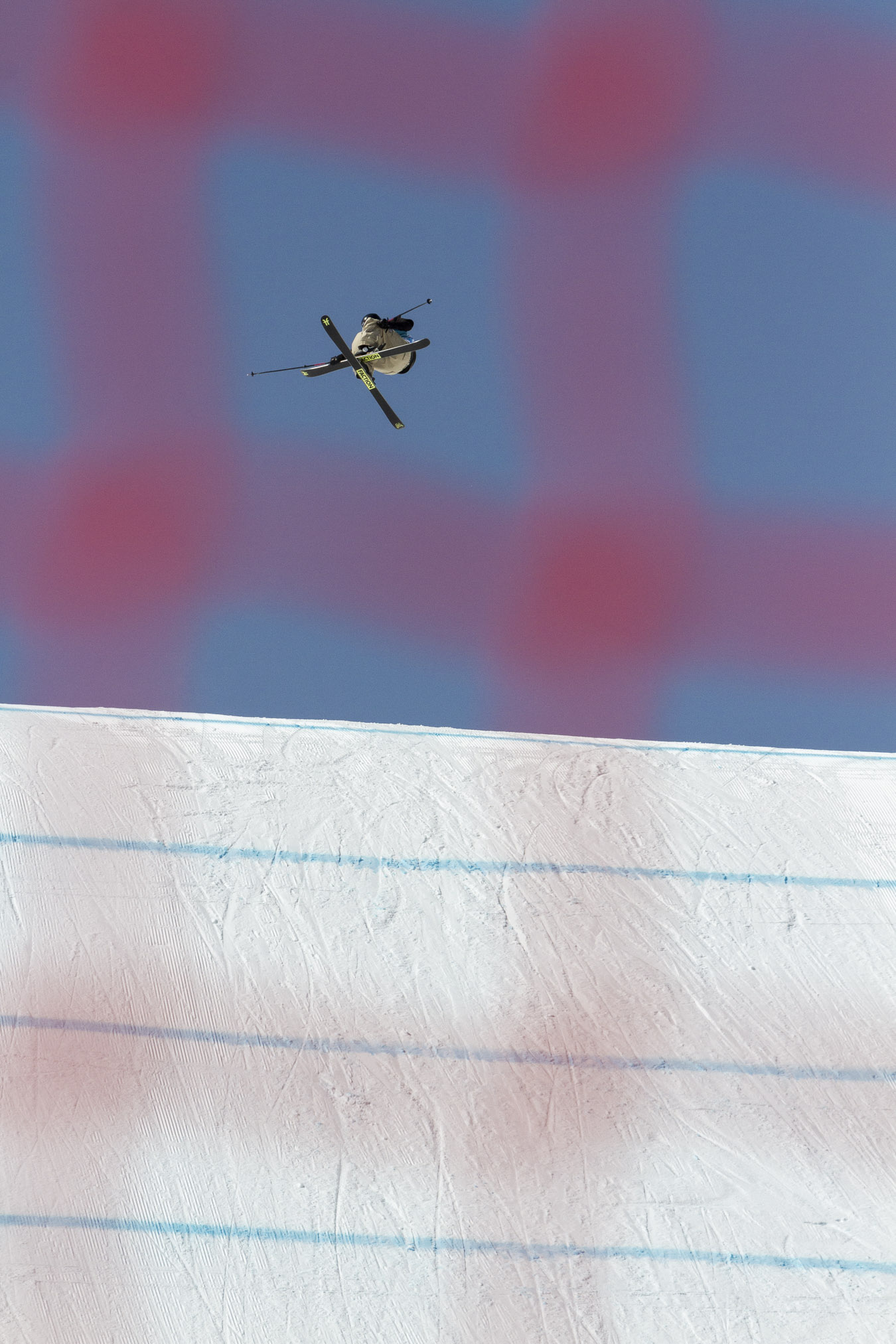 With a victory lap now in his hands, Birk could have taken it easy on his second run. But easy is not where he took it. Instead, he showed us what he’s truly capable of, taking his switch right 14 to 1800, nailing his forward left double bio 18 as clean as ever, and floating through a massive front 990 out of the last up rail that had grown men squealing like Beatles fans on the American tour. While his score didn’t improve due to a missed grab on the second jump, this so-called “victory lap” proved our worst suspicions: Birk Ruud is not, in fact, a human being. 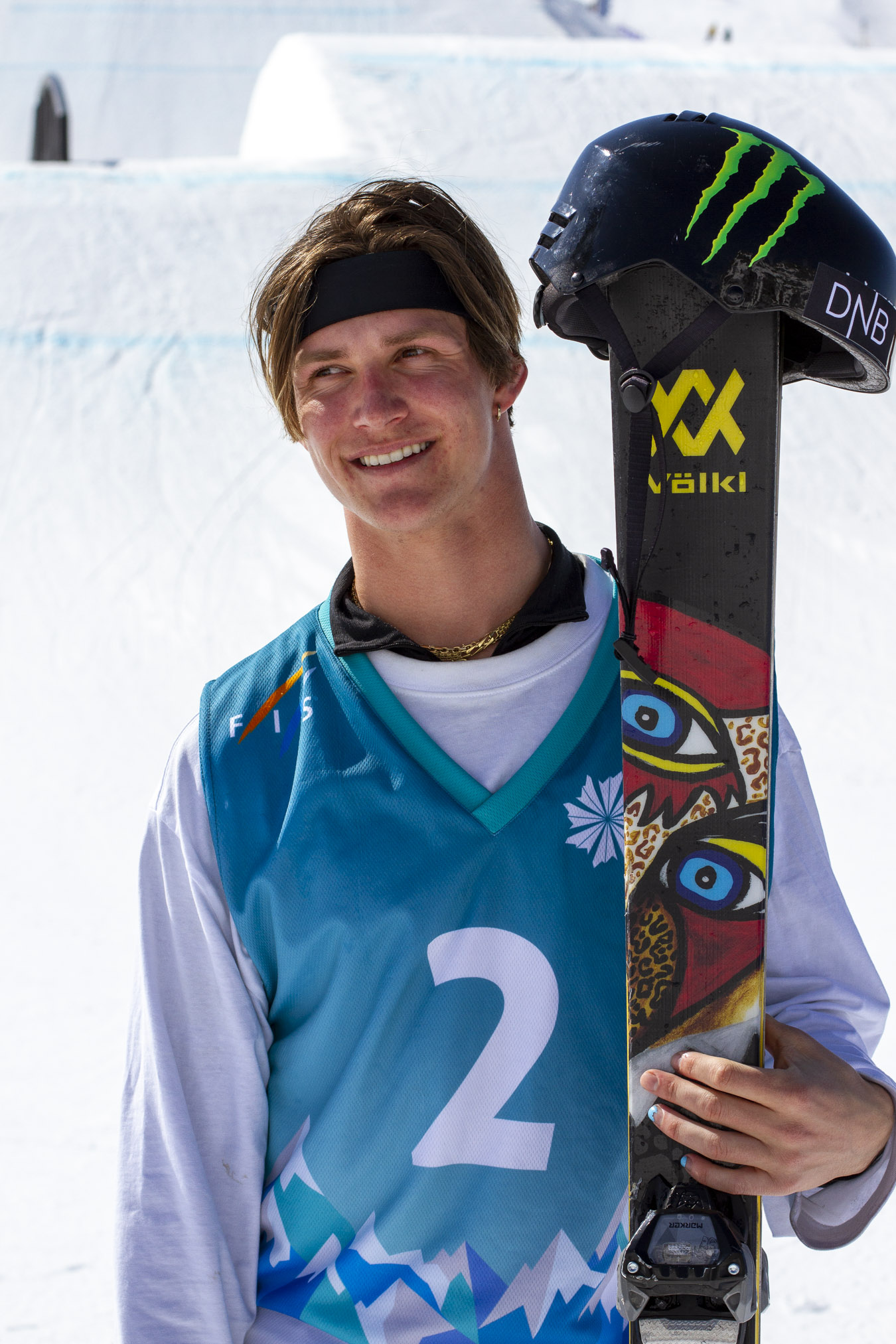 “This is amazing. It’s been a long season with everything—Olympic gold, a lot of competitions,” said Ruud. “I’ve done three [World Cup] slopestyles this year and I won every one of them. I almost didn’t believe it. When you work hard and smart, it pays off.” 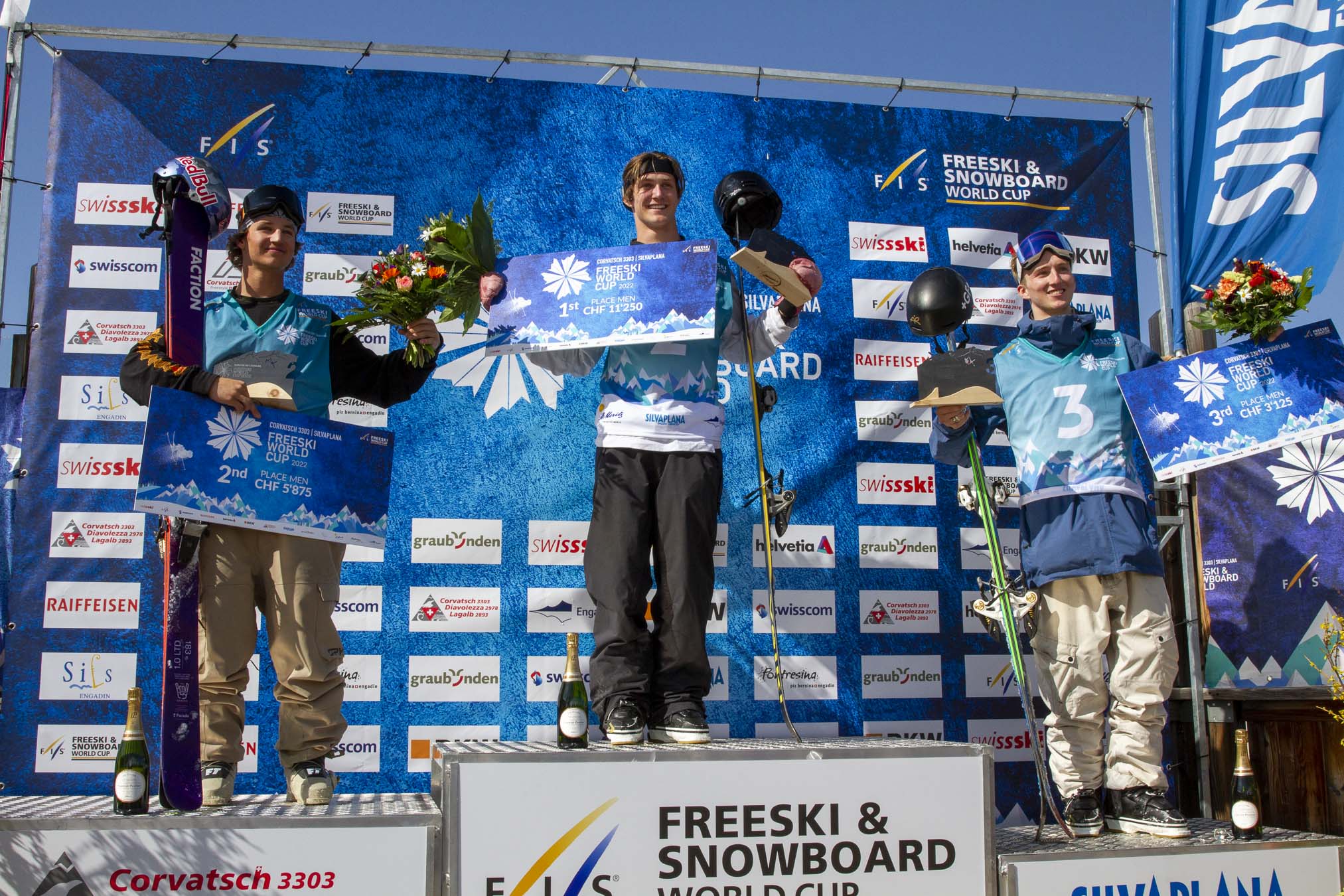 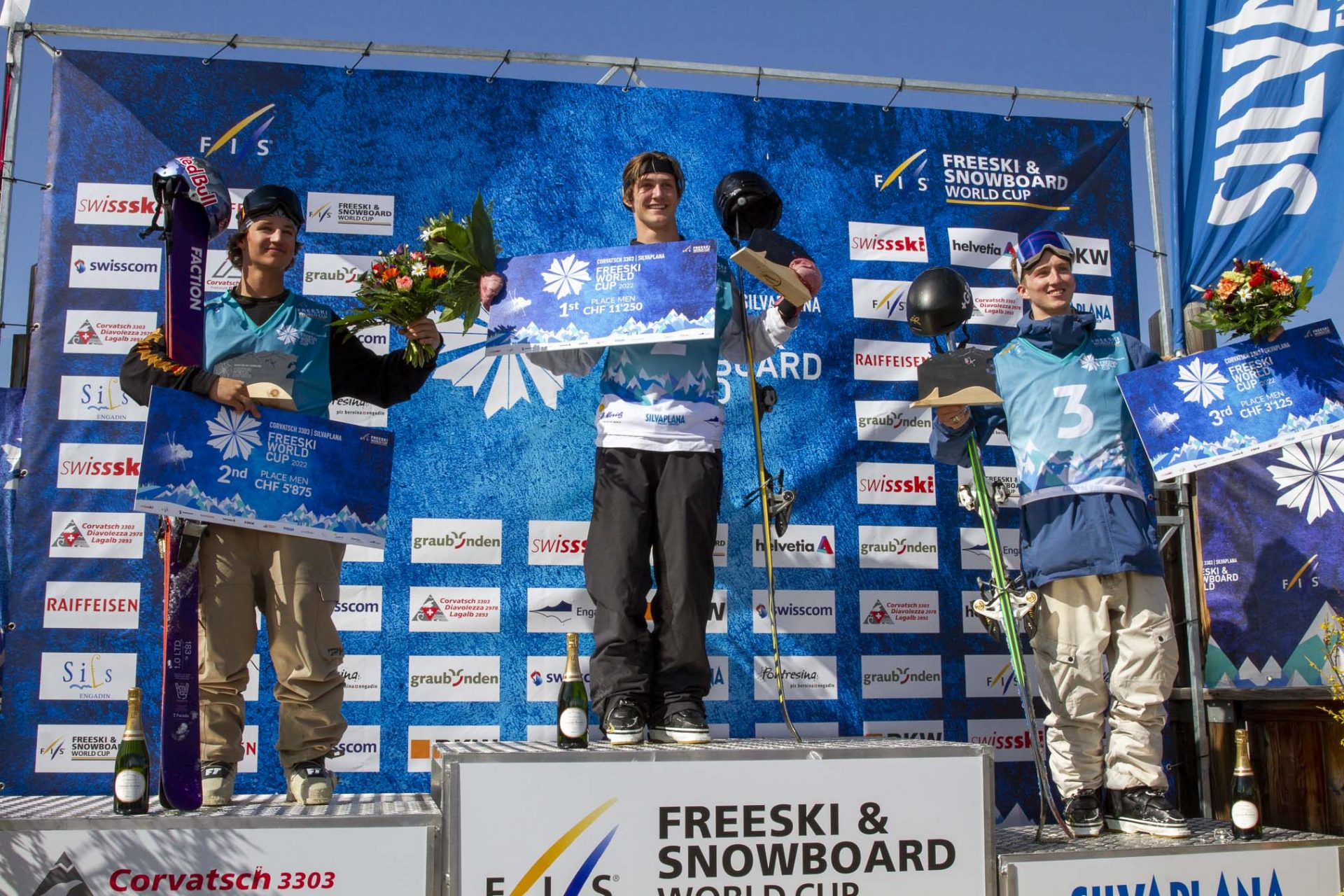 With the Corvatsch podiums in place, the overall titles for the 2021/22 contest season were also awarded. Kelly Sildaru and Andri Ragettli claimed the crystal globes as the overall slopestyle champions, while the “overall overall” titles—cumulating all FIS points for slopestyle, big air and halfpipe throughout the season—went to Birk Ruud and an absent Eileen Gu, who’s reportedly still busy with media dates in China following her Olympic performance. 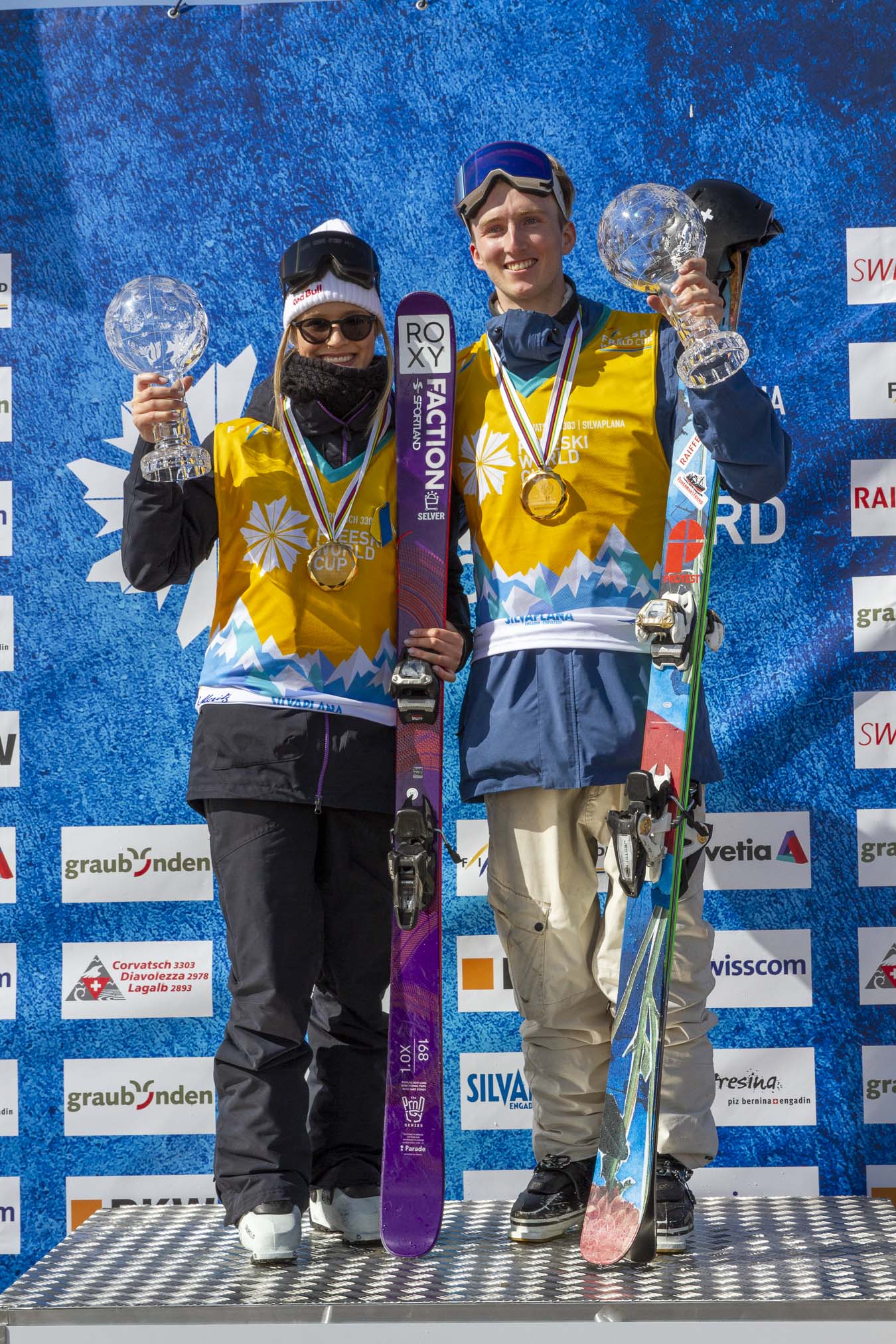 That’s it, that’s all for a busy and memorable World Cup season, and it couldn’t have gone out in a better way: an enthusiastic bunch of skiers drunkenly dancing on the tables at the Hossa bar, celebrating another contest year, and an Olympic year at that, in the books.

We can hate on FIS all we want—and let me assure you, we still do. But they’re not also the only show left in town as far as major contest circuits go; they’ve also shown that their contests are some of the best around (I’m looking at you, X Games). So at least we’ve got that. 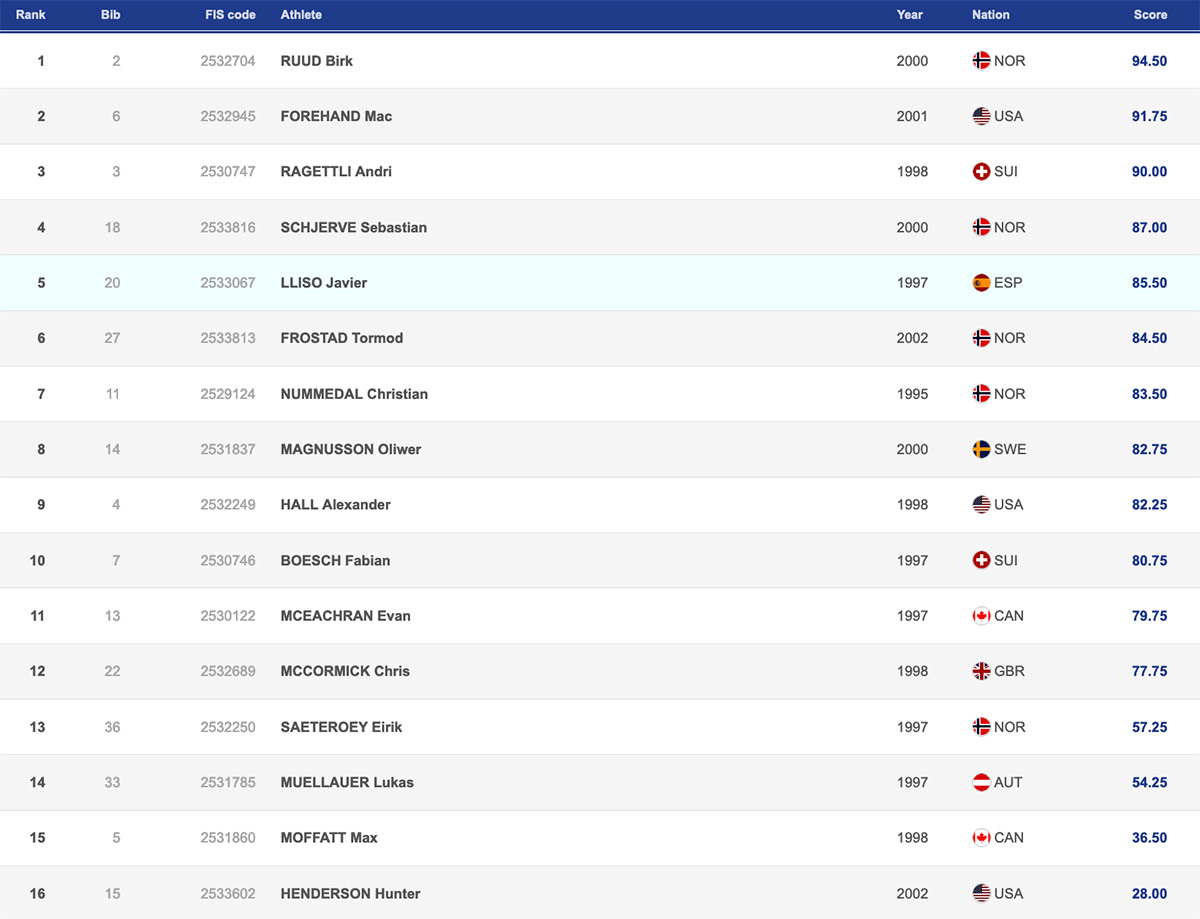