Birk Ruud took second in the Soldiers Big Air last weekend, on the way to his first overall win on the World Cup Big Air circuit.

Destne is a small village of just over 500 people in a northern part of the Czech Republic, in a mountain range called the Eagle Mountains. Though to be honest it doesn’t really look much like a mountain range, with the highest peak just 1115 meters above sea level. It’s in a poor part of our country that was badly affected by the Second World War. But believe it or not, last weekend Destne joined the ranks of cities like Beijing, Atlanta and Modena as it hosted the final World cup Big Air event of the season, the event that decides who takes home the crystal globe for the overall win.

If you’ve been following the freeski scene a little, you’ve probably heard about the Soldiers Big Air before. This contest has a long tradition. It started ten years ago when it was mostly attended by central European skiers, but the field slowly added more professional rippers every year, and in the past few years, the level of riding has been insane. Now here we are: this storied contest has been set as the ender to an insane World cup Big Air tour. 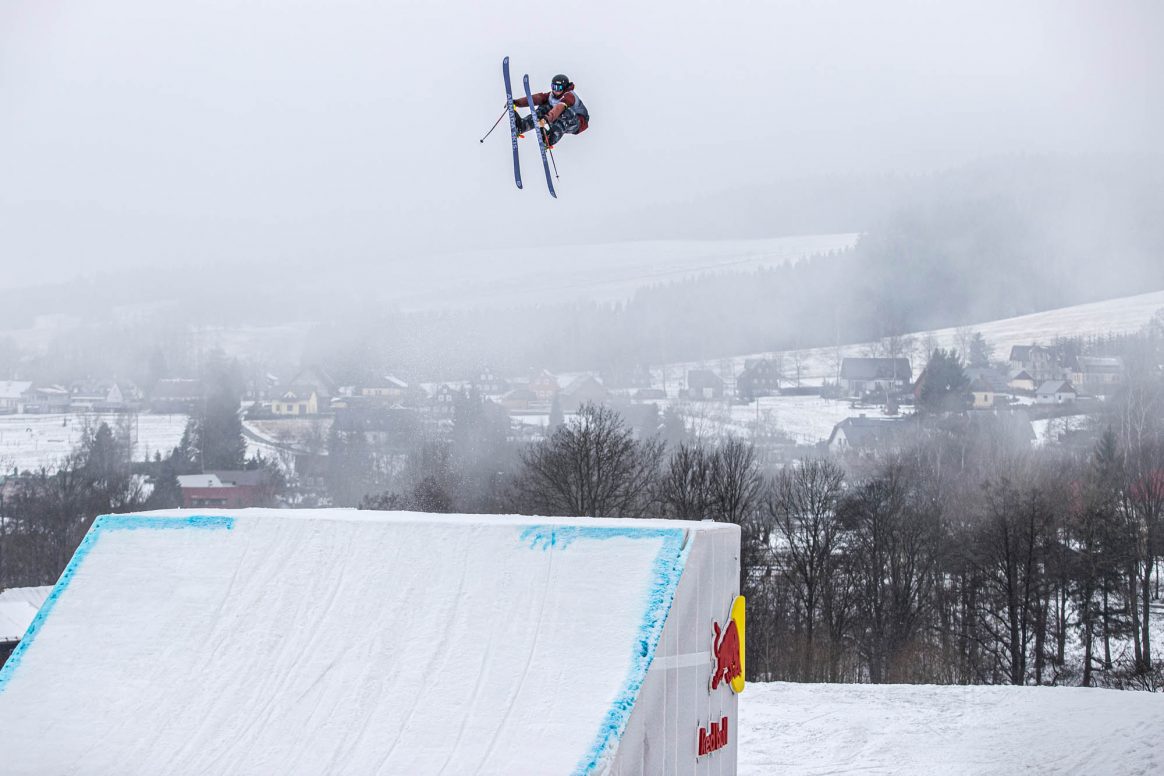 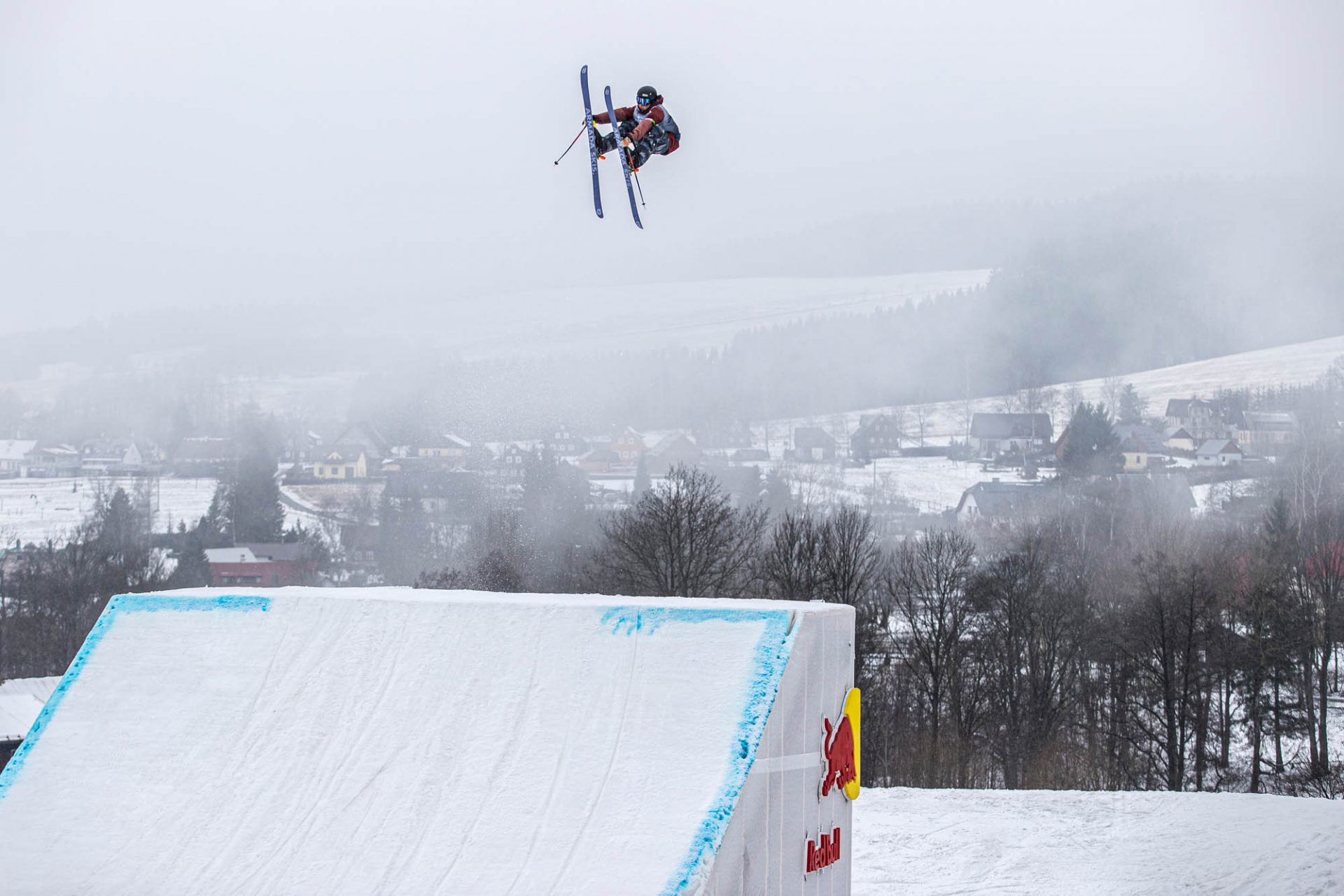 Despite low snow levels, the Soldiers shape crew was able to pull together a monster booter for the weekend's festivities. Czech style mastah Voita Bresky gives it a go.

The weather didn’t really cooperate this year. Snow conditions in Destne were some of the worst in a decade, and the struggle was real for the shapers to build a massive kicker. Fortunately, some cold days came right in time to make enough artificial snow for the landing. When all the riders arrived for the first training day, heavy rain and warm winds shut down the session. The training was rescheduled to Thursday, when the clouds rolled out and the crew finally had a nice session on this lofty booter. For me, the highlight was a switch triple cork 1260 screaming seamen mute grab from infamous big air guru Elias Syrja (FIN). 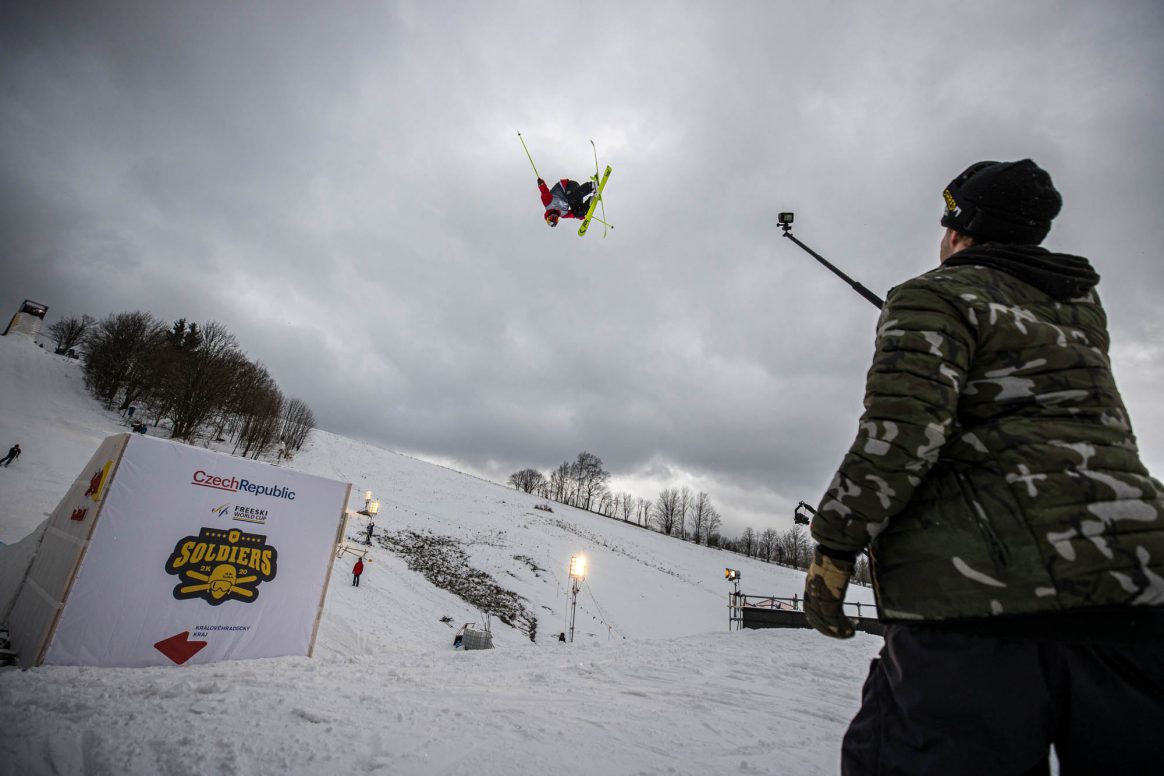 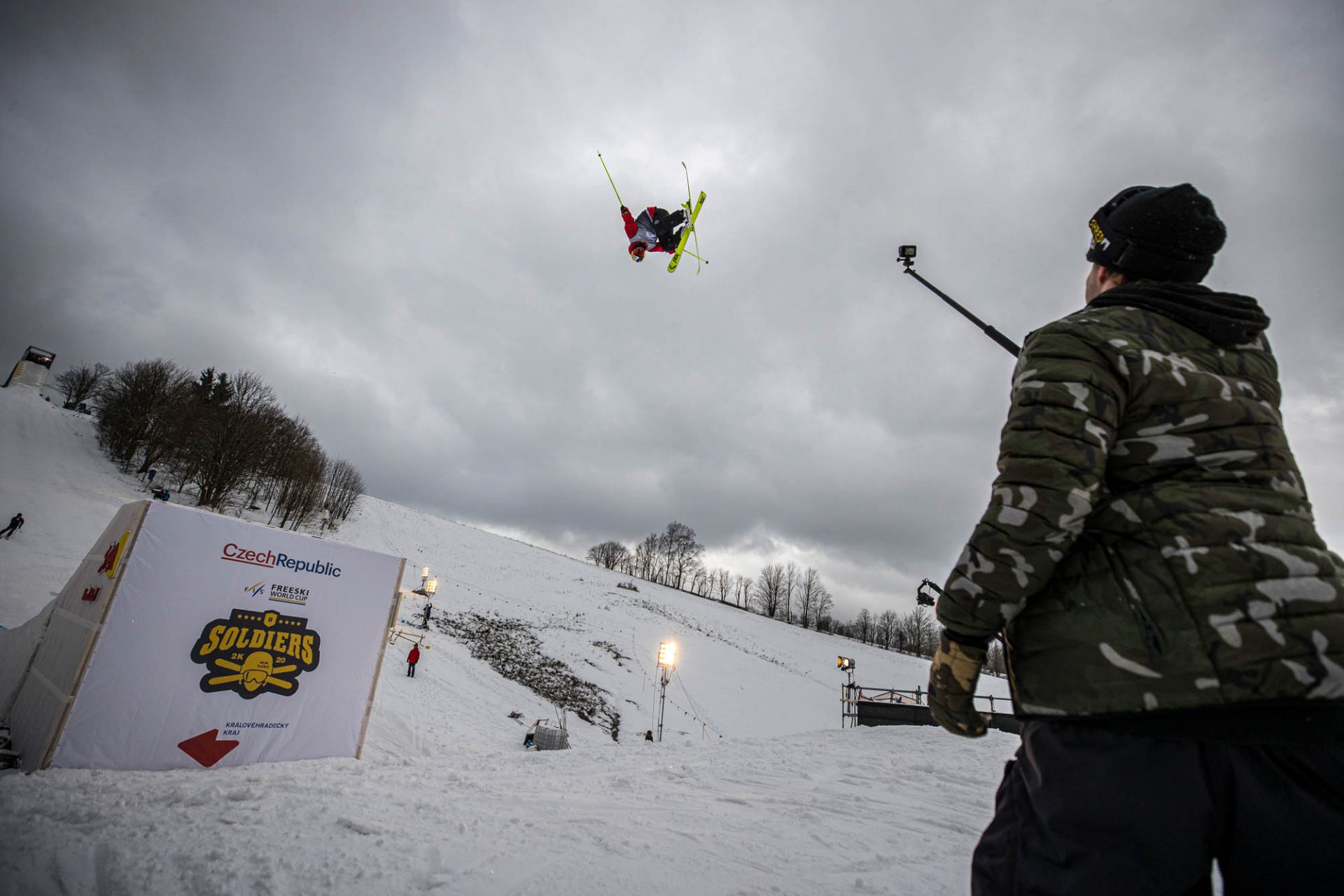 Soldiers uses a unique hybrid build for their jump, with the landing made with snow and the kicker out of scaffolding. Jesper Tjäder inspects. 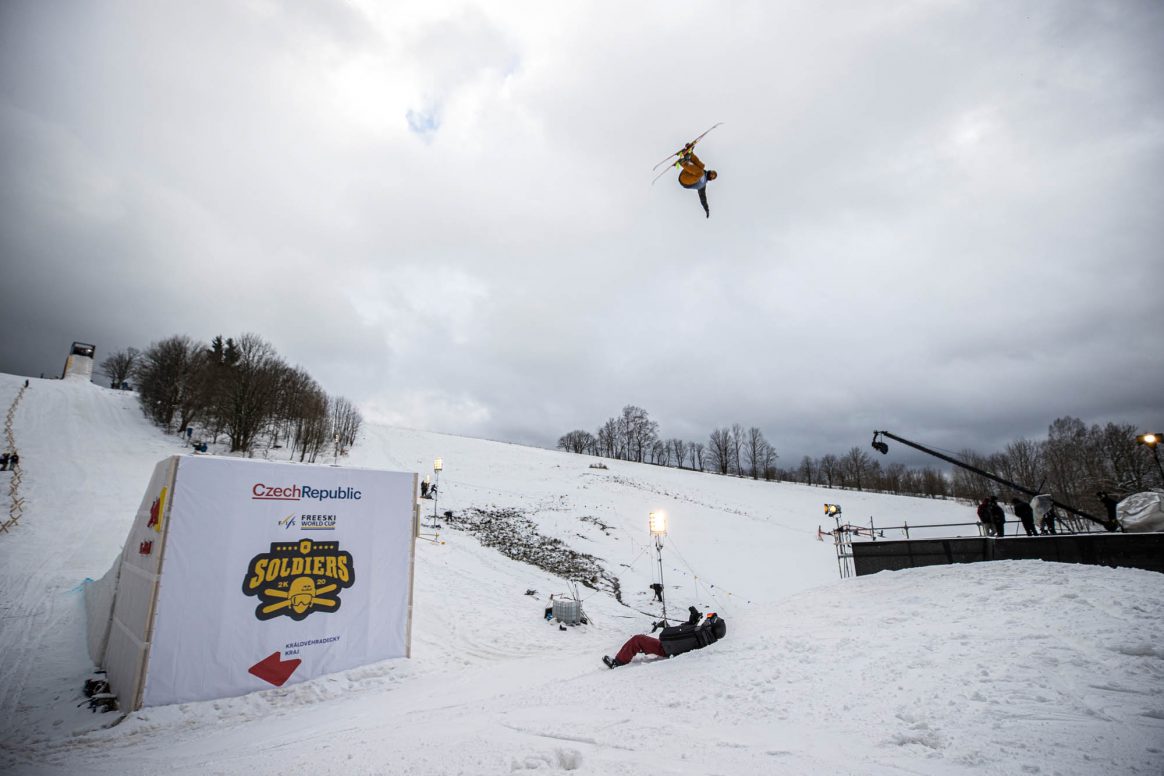 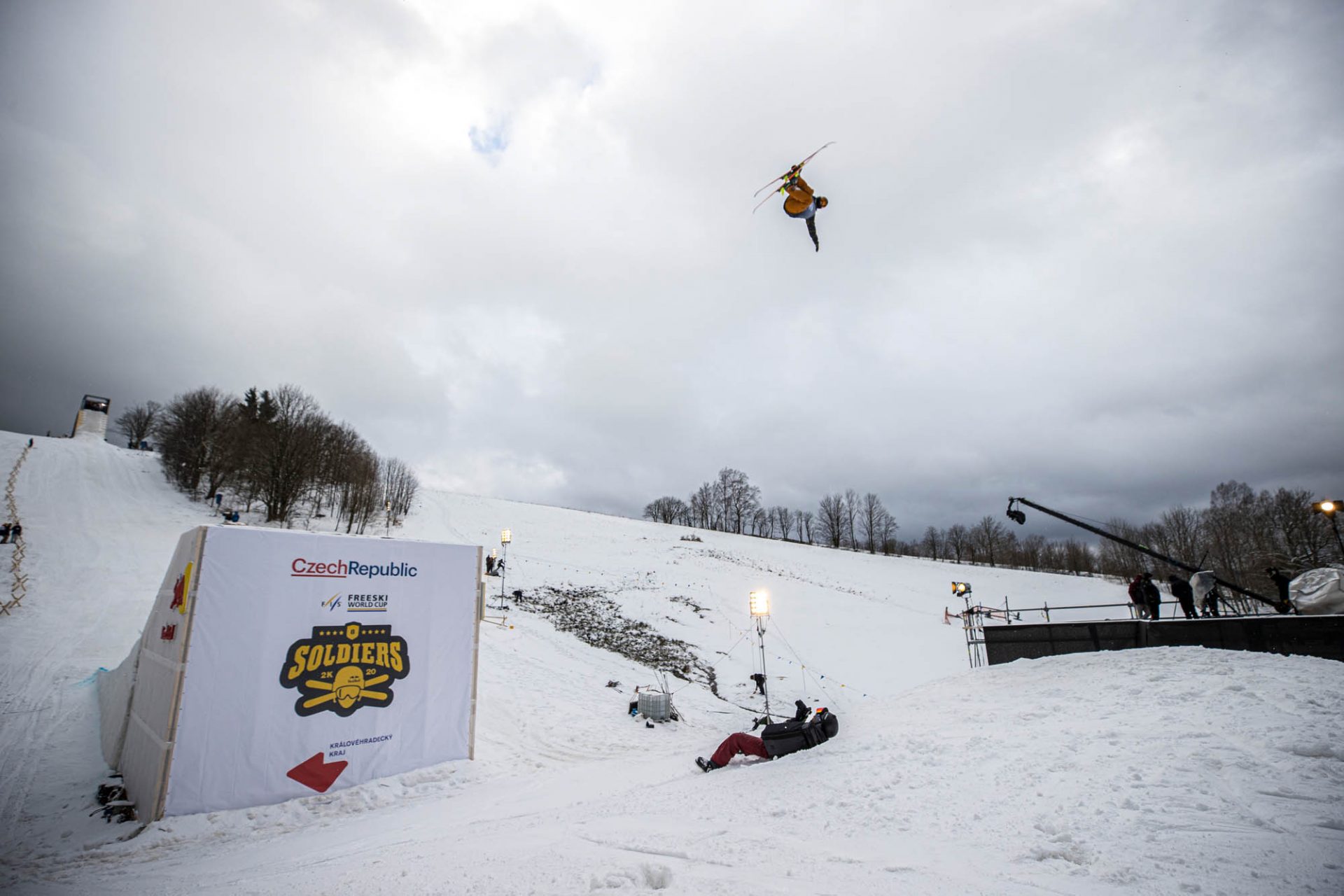 Qualifiers went down on Friday, with Antoine Adelisse (FRA) and Thibault Magnin (ESP) winning their heats. Soldiers even tested a new World cup format: four guys from each heat went straight to finals, and another six from each heat advanced to a semifinal round to battle it out for four additional finals spots.

There was one more thing happening on Friday, and that was the Night Attack: a team session to put on a show for the big crowd. Teams were made of three skiers, who dropped into the kicker or the knuckle at the same time. After a really nice show, the judges decided to give the win to Team Whateverest: Jesper Tjader (SWE) who was sending insane dub 16s, Voita Bresky (CZE) with dub 7s and switch dub 9s, and Daniel Hanka (CZE) spicing it up with stylish lazyboy 360s. 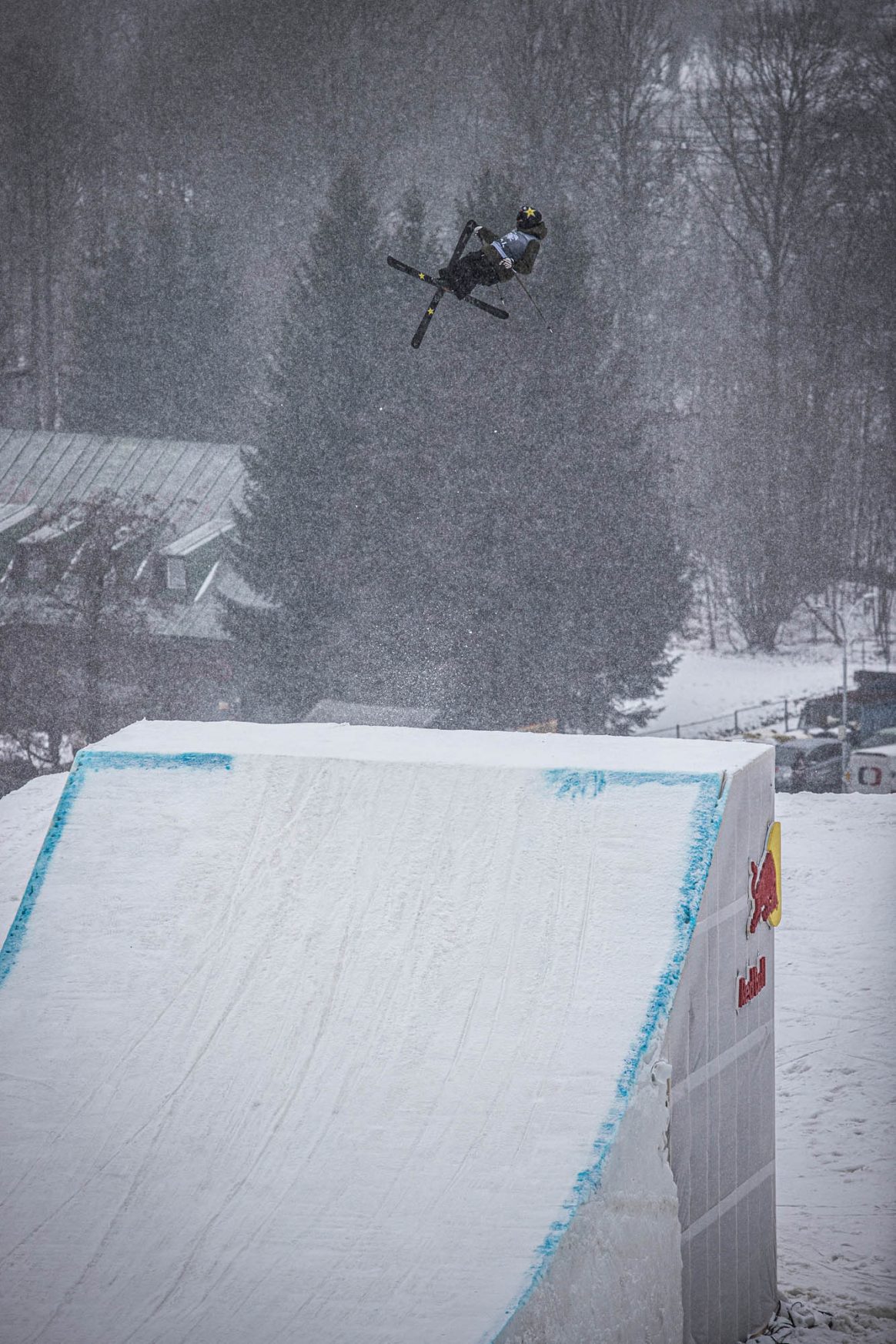 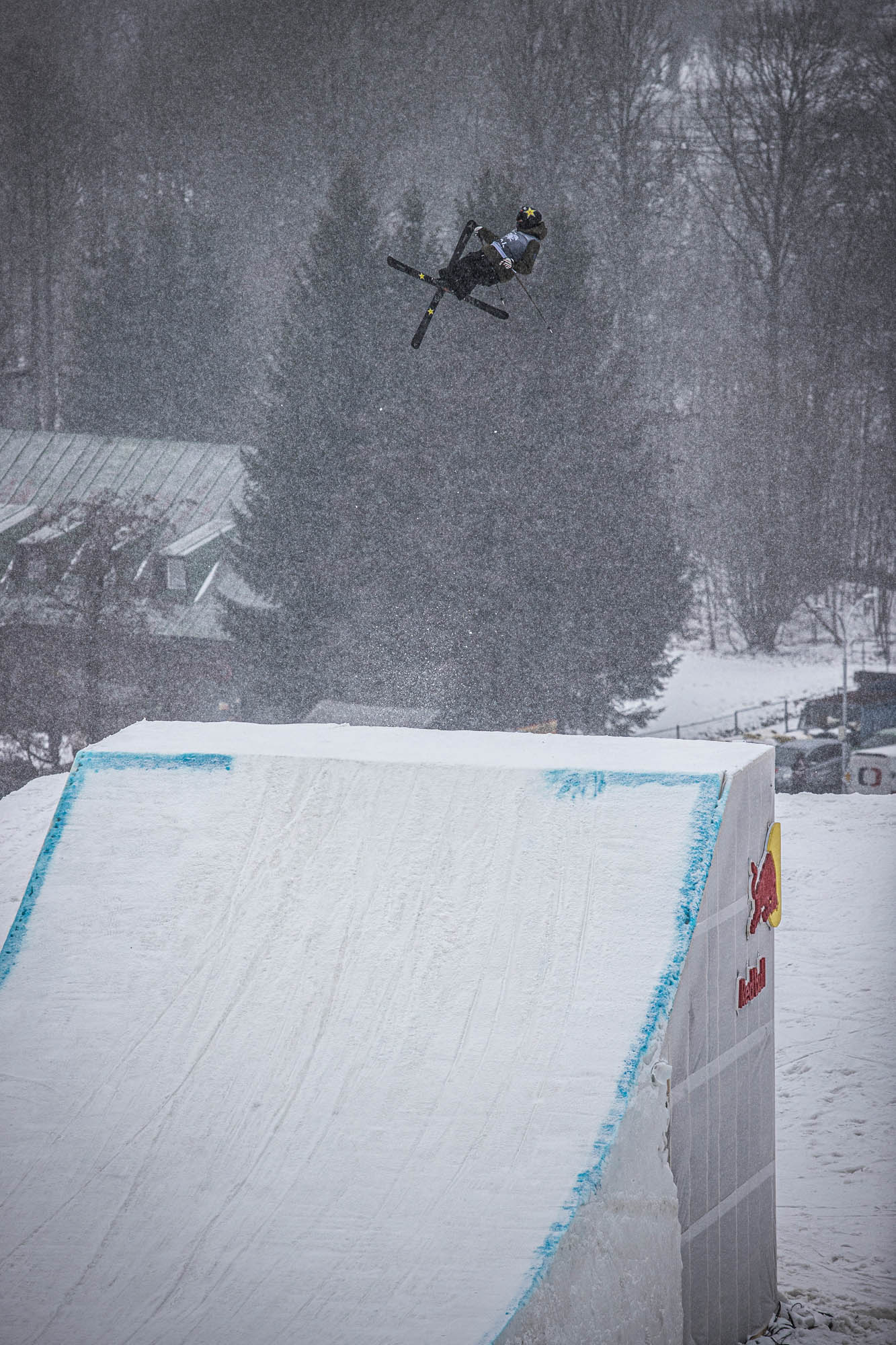 Germany's Flo Preuss battling the elements in the qualifiers. 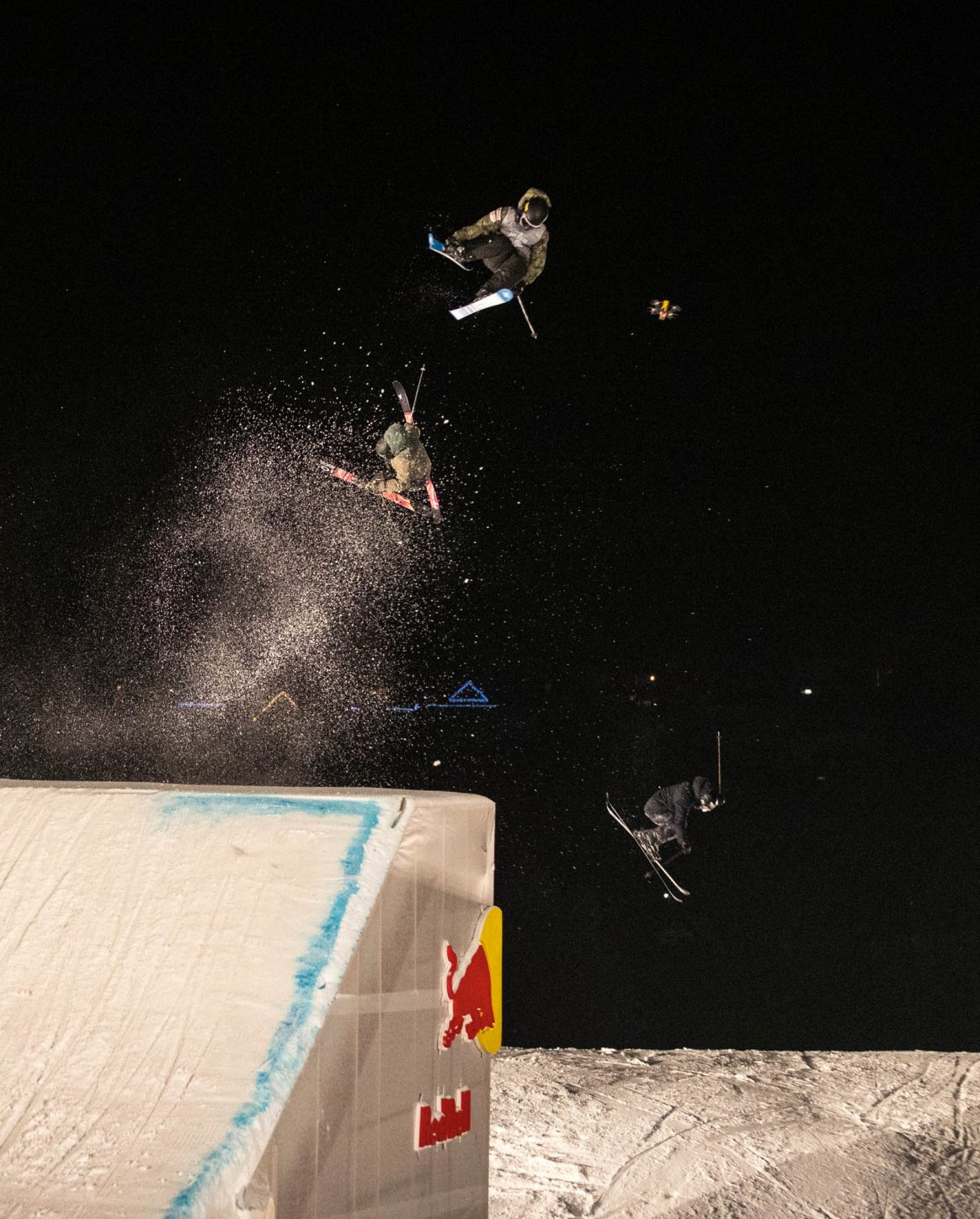 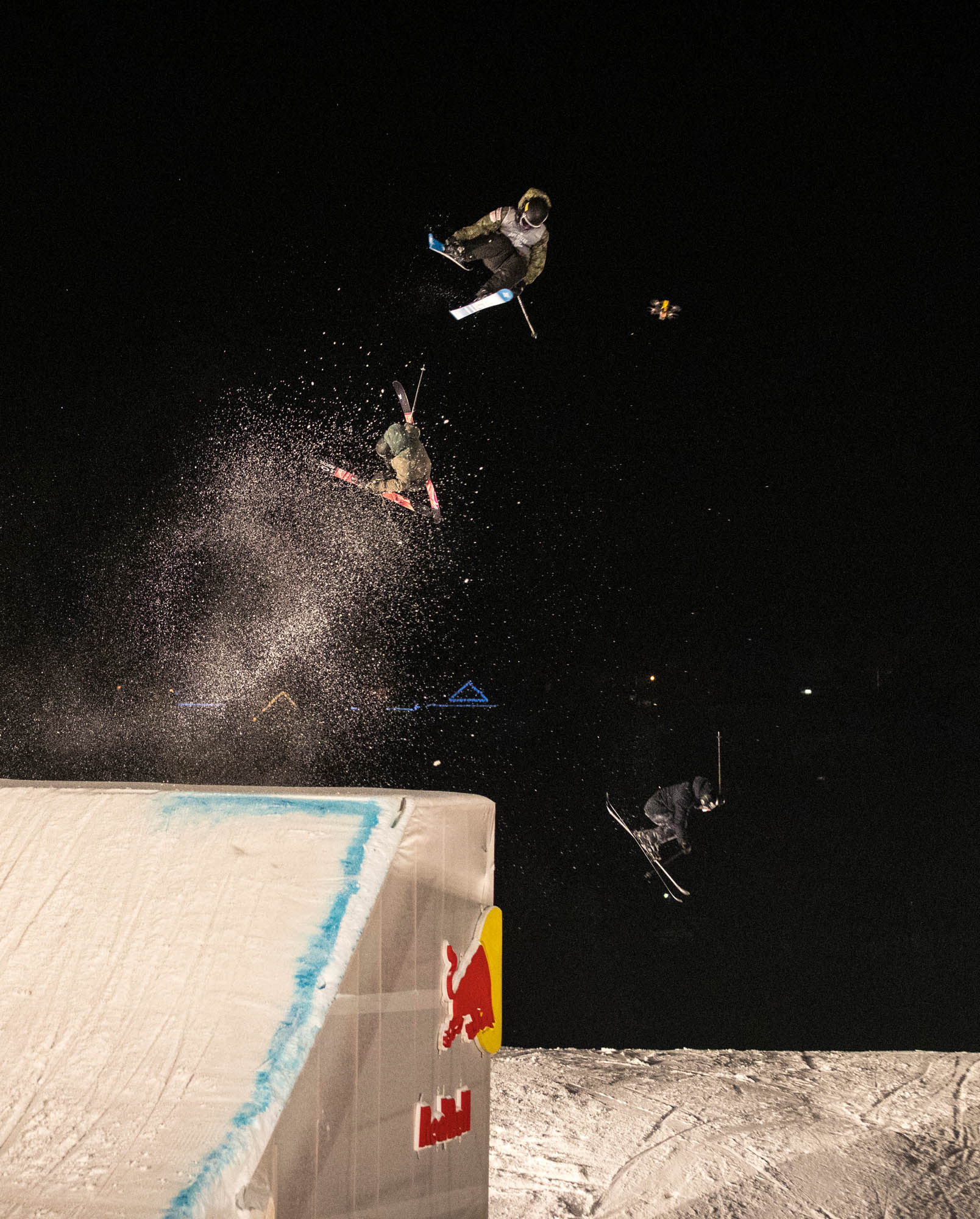 The Night Attack provided triple-fire action for the crowd. 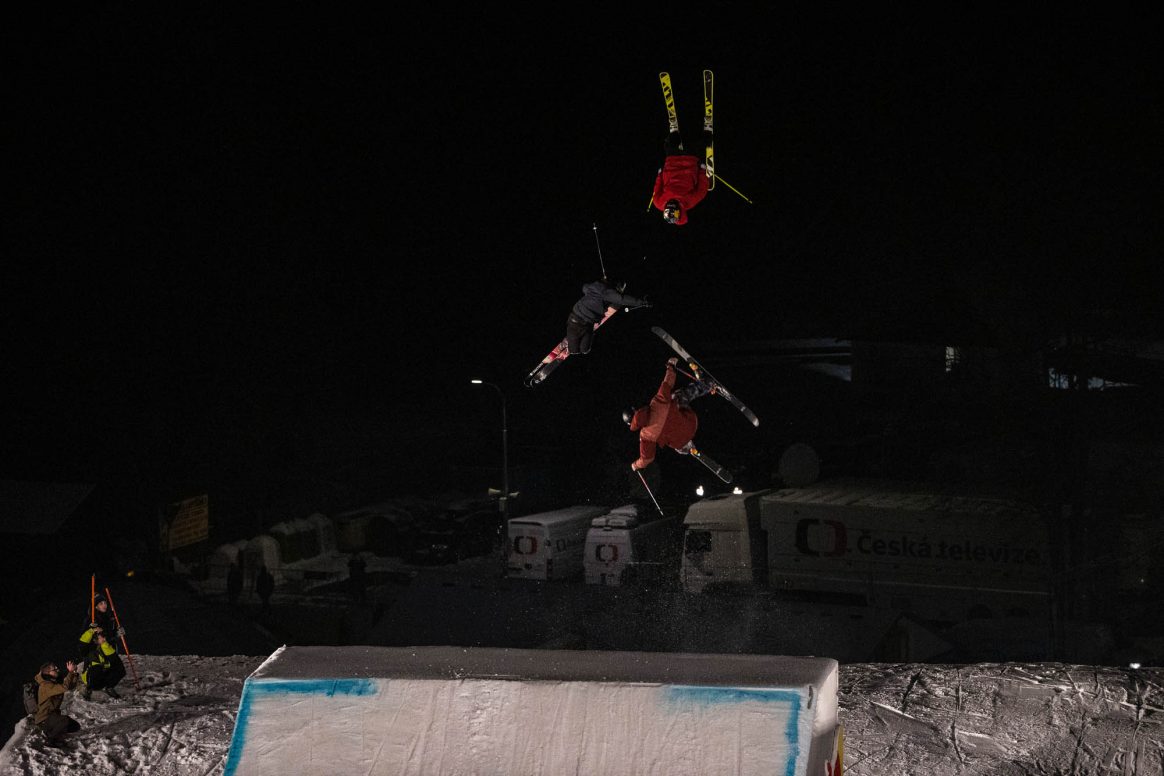 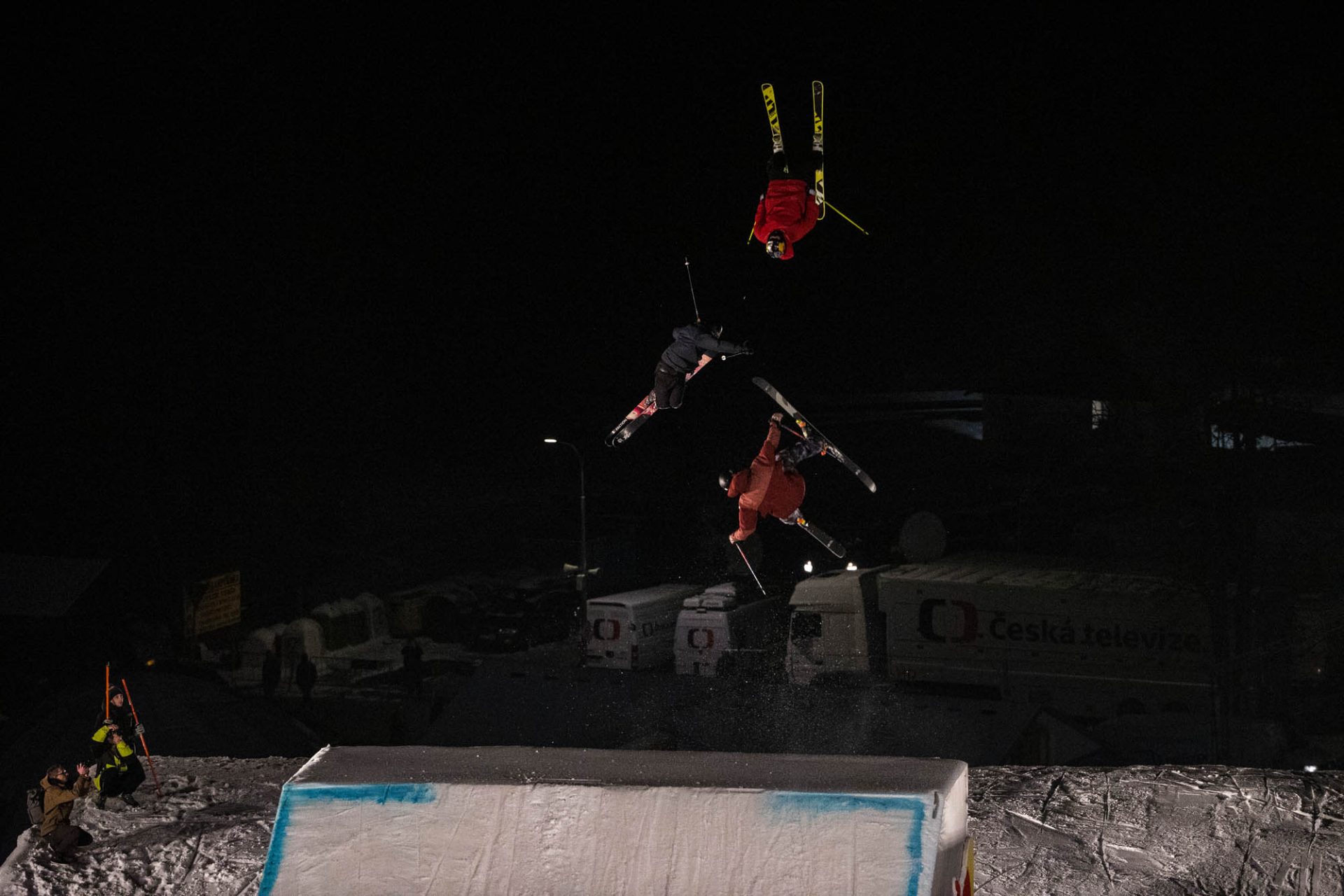 Team Whateverest on their way to the win.

The semis and finals went down on Saturday.  The women’s competition was unfortunately cancelled because of tricky conditions during their training. At least there was a final ceremony for the overall World cup standings, where Giulia Tanno (SUI) took the crystal globe, followed by her Swiss teammate Mathilde Gremaud and Johanne Killi (NOR) in third. Congrats girls! 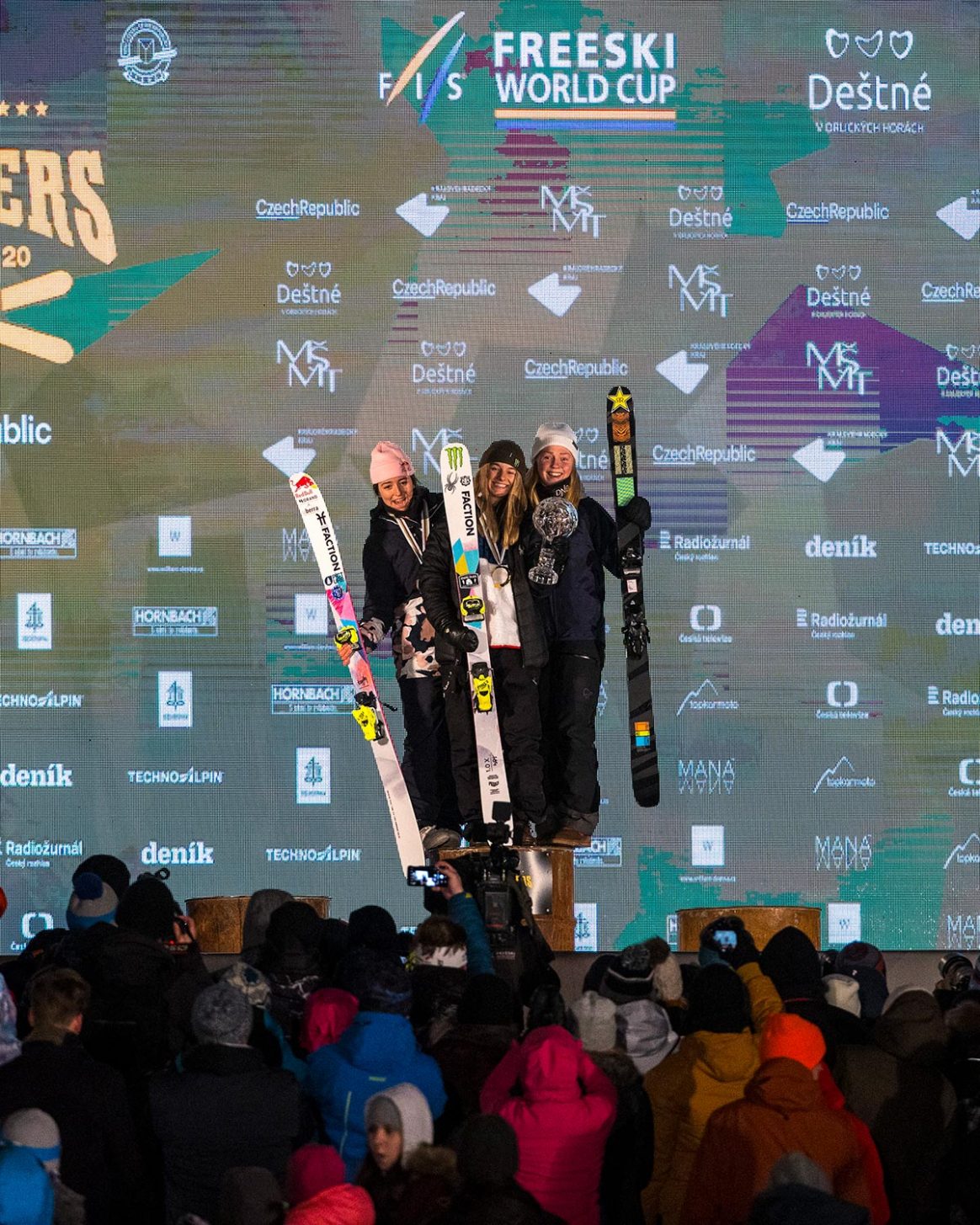 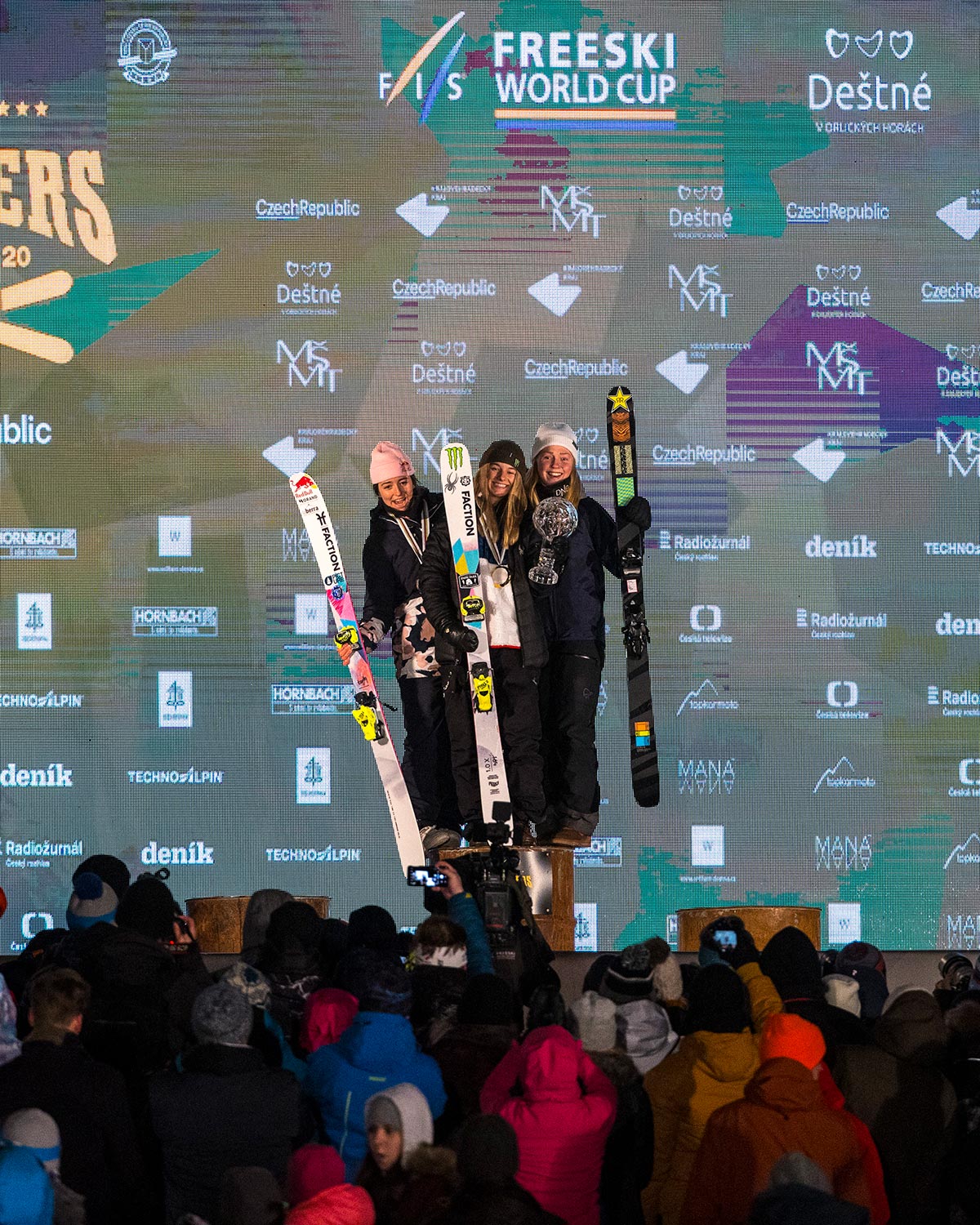 The men’s semifinals already showed a really sick level skiing, but heavy hitters like Mr. Coronavirus Ralph Welponer (ITA) or Christian Nummedal (NOR) missed the finals this time around. Up next were the finals, and as a crowd of a couple thousand people packed in all around the kicker to cheer on the riders, the hype was real.

Lukas Müllauer (AUT) unfortunately had to go to a Krankenhaus due to back pain—no skiing in finals for him this time. Hope you are doing well now, Luki! Everyone was sending extra hard, Elias Syrja took the lead with a perfect nosebutter dub cork 1620 blunt, while Birk Ruud (NOR) made his switch dub cork 1620 blunt look flowy like it was a seven. Qualification winner Antoine Adelisse stomped a perfect triple 1620 mute. In round two, Syrja went for a switch triple 1260 mute to screaming seamen, stomping it to stay in first place. 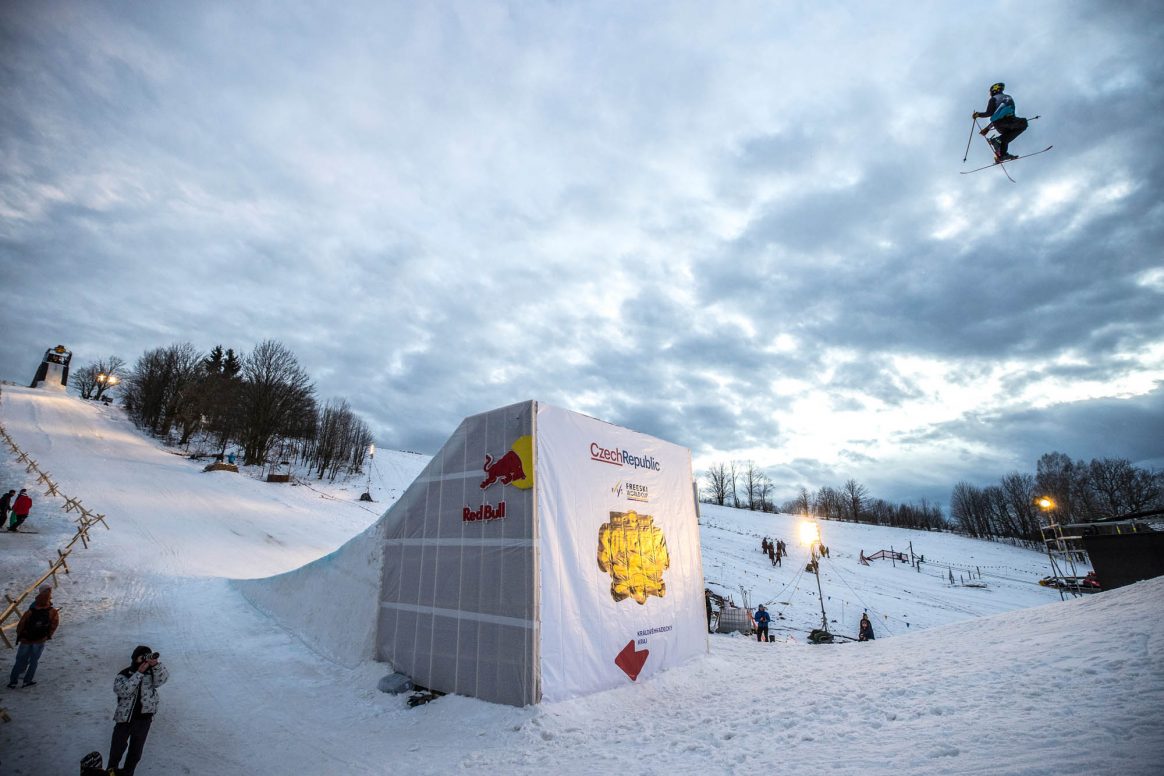 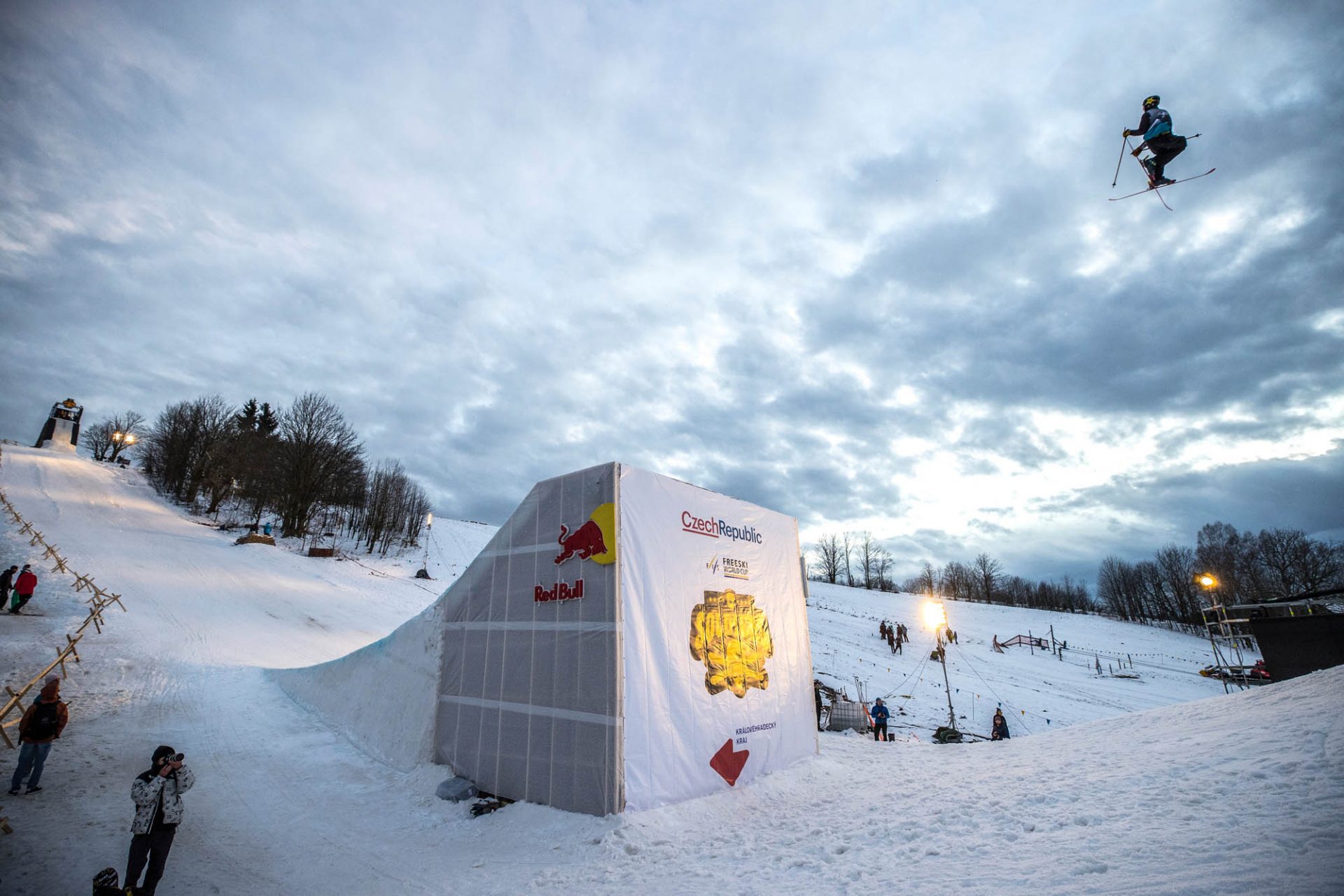 Do I really need to caption this? Of course, it's A-Hall. 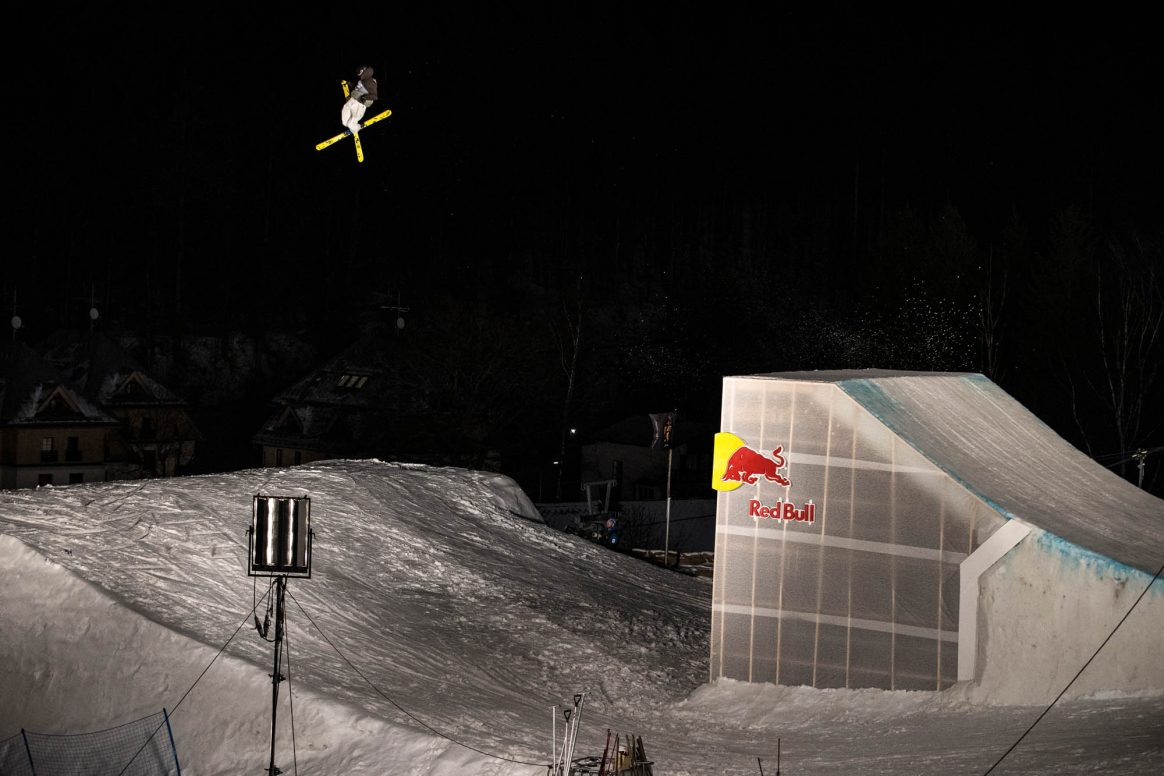 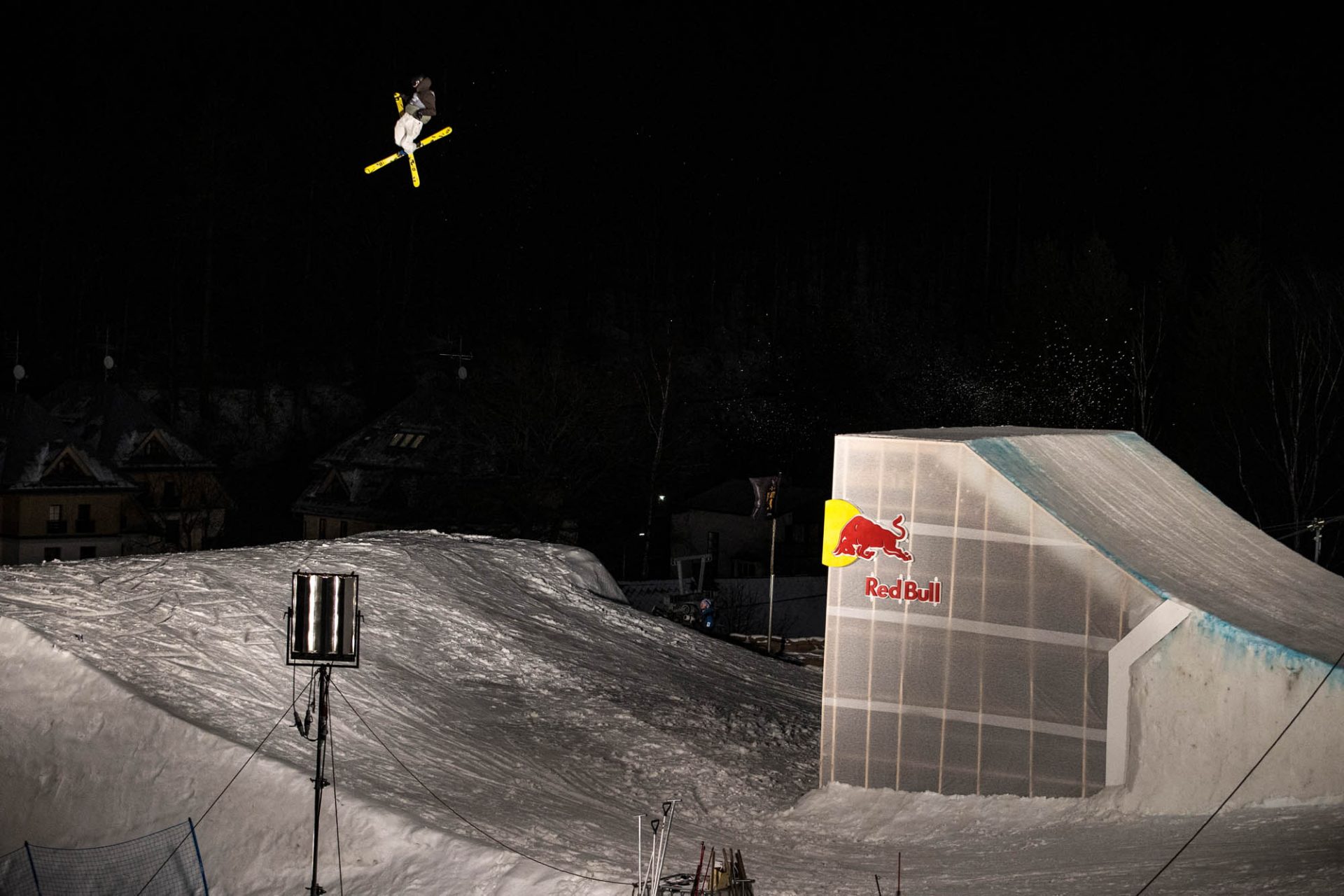 Andri Ragettli sending it during finals.

The third round was just insane. Young gun Ulrik Samnoy (NOR) absolutely stomped a triple cork 1620 and with his previous switch triple 1440, it was enough for the bronze medal. Antoine Adelisse put down a switch pre-nose triple cork 1440, maybe the most insane trick of the whole evening, and was rewarded with 98 points that put him in first place. Birk Ruud did a perfect double bio 1800 mute, but would have needed to get 100 points to bump Antoine off the first-place spot. He got “only” a 97 and moved into second. The last one to drop was Elias Syrja, who by that time was hovering in fourth place. He could have taken the win if he cleaned up the landing on his switch triple, but he took too much speed and sent it to the very bottom of the landing, taking a hard slam and reportedly injuring his knee. We’re sending you all the healing vibes Elias, hope you will be back soon!

In the end Antoine took the win for the day, while Birk Ruud scored his first crystal globe overall win on the FIS World Cup Tour, followed by Alex Hall and Antoine Adelisse. After the contest, there was only one way to go: a party in a huge tent with some of the Czech’s hottest artists and hundreds of people, where the competitors could drink non-alcoholic beverages from their new crystal globes. Thank you Soldiers, till the next time! 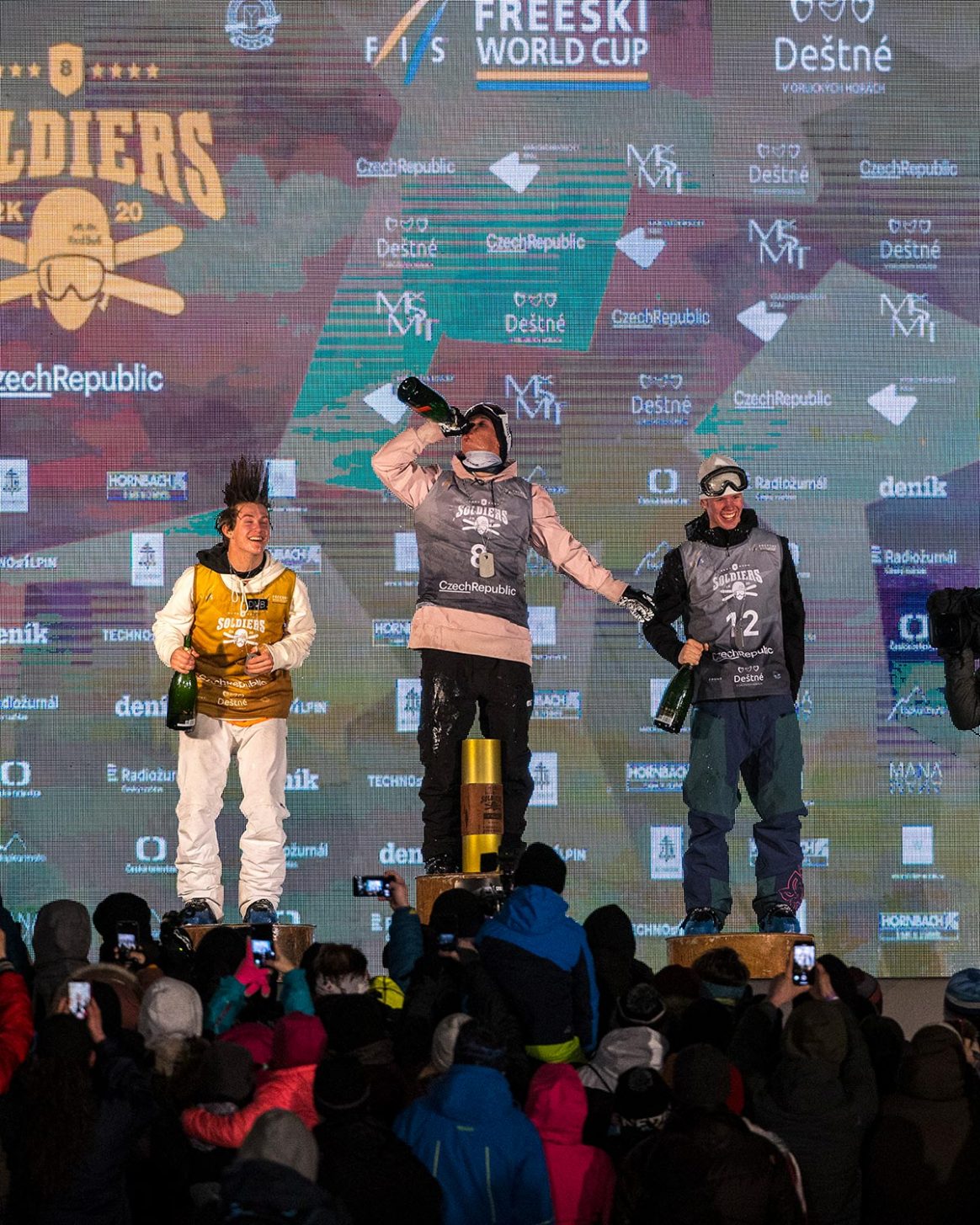 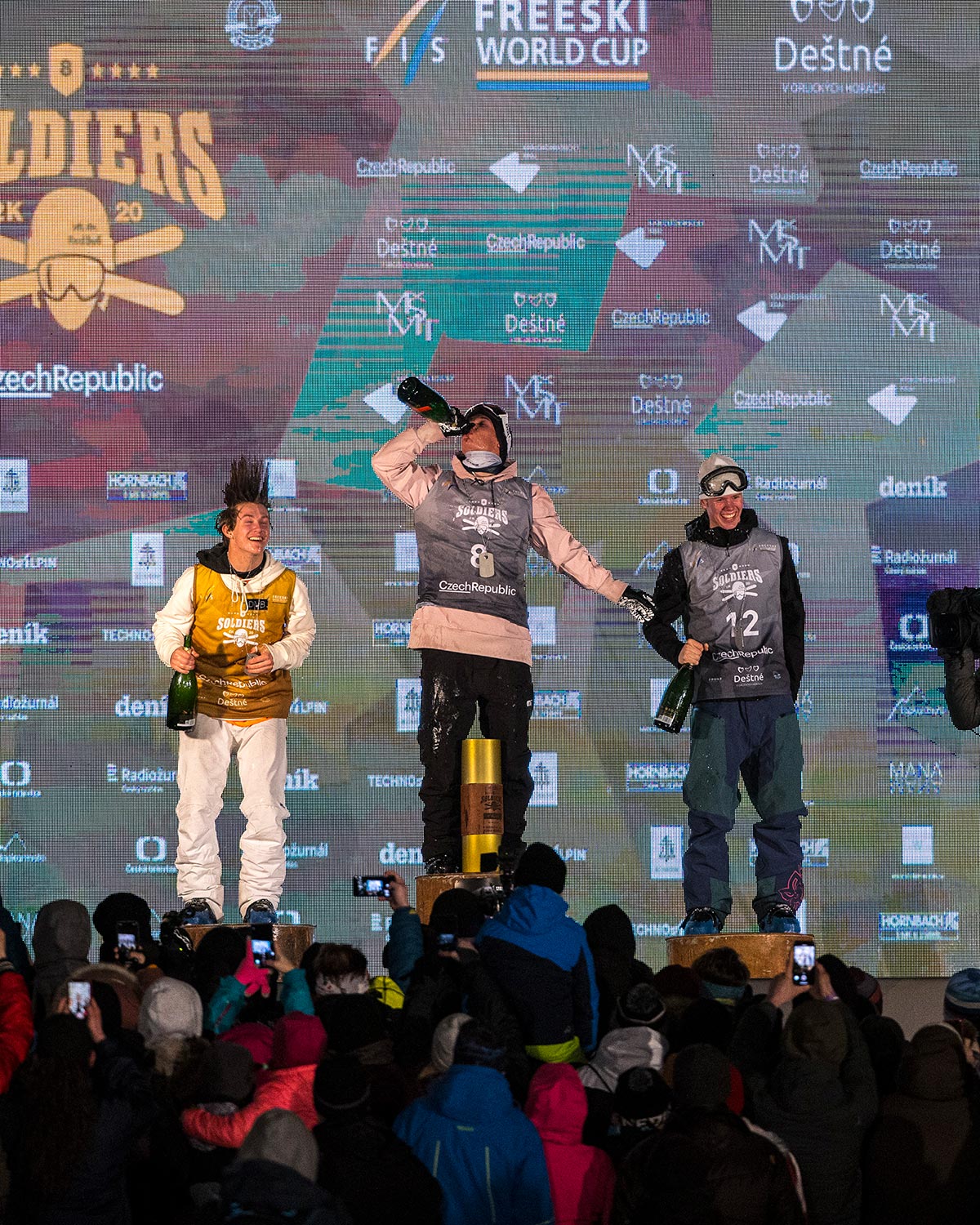 The first spectacular pictures from the #BackeBreieTour

The first spectacular pictures from the #BackeBreieTour