Whether by accident or design, the 2018 Jossi Wells Invitational managed to blur the line between competition and spring park shoot to such a degree that as far as the invited riders were concerned, the JWI was simply a weeklong shred session of the most epic proportions.

Instead of the traditional results-based output, a tight media crew documented the all-time list of skiers and snowboarders throwing hammer after hammer in perfect spring conditions, and distributed it immediately for quick consumption by the hungry masses. It wasn’t exactly an anti-contest—“winners” were eventually decided amongst the riders in the end—but the scene at this year’s Invitational couldn’t have been further from stressed-out comp vibes if it tried. Unrolling a new three-day format for 2018, the loose schedule and variety of canvases for the crew to work with quickly turned the event into an homage to the good-old fashioned jam session. Hanging and hiking, vibing and cheering, pushing the limits of both tech and style, and doing it all for props not points, the event has already been heralded as one of the best comps/shoots/sessions in years.

“This event has been what I always dreamed of putting together,” said a buzzing Jossi on the final day. “Three days of just epic jam sessions with the crew. No, like, ‘land your run right now’ kind of pressure, just jams. It’s been a real good breeding ground for these guys to excel. And I really think that my favourite part about skiing and snowboarding and skateboarding growing up was these vibes. I think that all these riders kinda felt that as well, and everyone’s been having an amazing time and I’ve been getting really good feedback. We just don’t do that anymore and it’s cool. It’s really cool.”

Day One kicked off with the Rail Jam. The event area put together by the team at Cardrona Parks consisted of a flat-down leading into a rainbow or down-rail option, and then some more rails below. But once the hike jam got going, things got so heated on the flat-down that the other rails barely got a look-in. Shaking off the jet lag and getting an early feel for how the rest of the week would play out, the crew started feeding off each other’s stoke, and the throwdown escalated quickly. 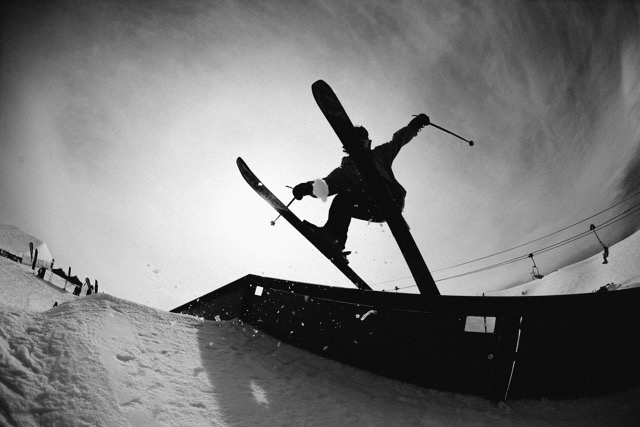 Henrik Harlaut was looking sharp as a tack after a summer off skis, and after schooling the crowd on the finer points of style, was still hiking the rails long after everyone else had called it a day. After a hectic afternoon, the rider’s vote went to local shredder Dane Kirk for his never-ending repertoire of tech combos and unique lines.

“On the ski side, Henrik is just always a pleasure to watch, but someone who really stood out for me all this week was Dane Kirk,” said Jossi. “He’s just crushing it. Real cool style, with real sick tricks.” 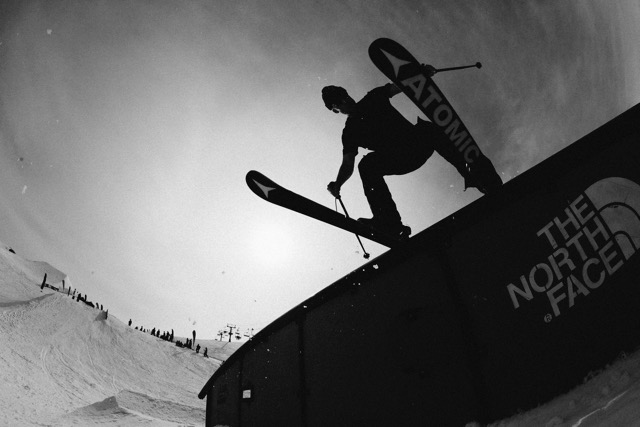 A quick look at the weather forecast called for a reshuffle of the original schedule, and the Big Air was pulled forward to take advantage of the perfect windless conditions needed to maximise the send potential on the 24-meter beast. In stark contrast to the FIS World Cup Big Air that had taken place on the jump just one week prior, the rider-judged, open format, two-hour jam ended up being a crucible of creativity and a heck of a lot of fun to watch. 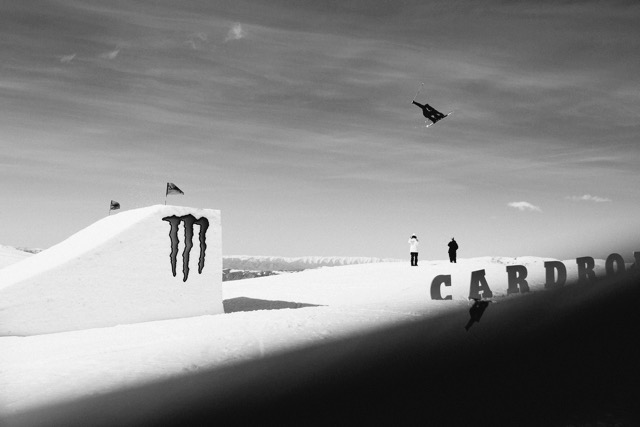 Cork three trains, Jossi’s zero spins, Wacko’s grabs, Henrik’s everything, Jake Carney’s buttery smooth 180s, Woodsy trying new tricks, Noah Morrison going ham, Finn Bilous looking far too comfortable on that jump, Gimbal God taking followcams to new realms, not to mention all the crazy shit the snowboarders were up to—there were just too many highlights to pick out. Check the full recap of the live stream if you have a spare couple of hours and a tolerance for chaos. Where else could you watch Jossi Wells’ signature zero spin, followed immediately after by Yuki Kadono slamming a backside triple 16 straight to his feet?

“The Big Air was so sick on so many levels,” said Jossi. “There were crazy technical tricks being thrown, and then crazy stylish tricks being thrown the next run, just kinda the whole jam session thing that we grew up doing. The event this year really felt like one of those jams that you went to when you were a kid. Like a rail jam where you’re all just trying your first 270 on or something, and everyone’s just juiced up, and it really felt like that.” 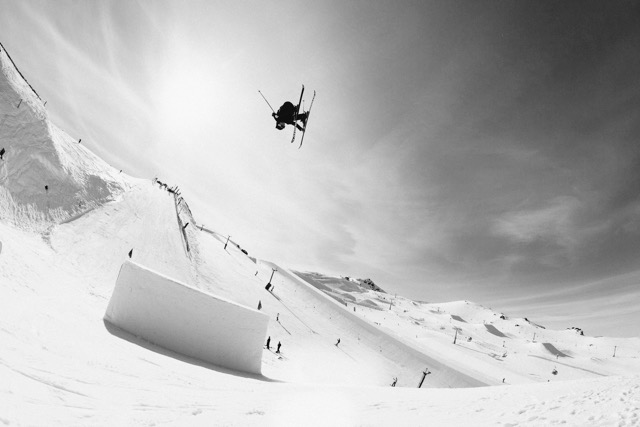 Riders’ choice for the day went to local Finn Bilious, who was fresh off his World Cup Big Air bronze and never shy of the Gucci Plateau. “It was so crazy to be doing a train into the jump, and the dude in front of you does like a dub 12 or something,” said Finn. “It was hectic!”

Though the Big Air was always going to steal the show, informal polls among the riders found that the most eagerly anticipated session of the week was actually the mini pipe. In the age of 22-foot icy monsters, riding janky, squared-off, slushy tranny is a dying art. But one that definitely needs resurrecting. 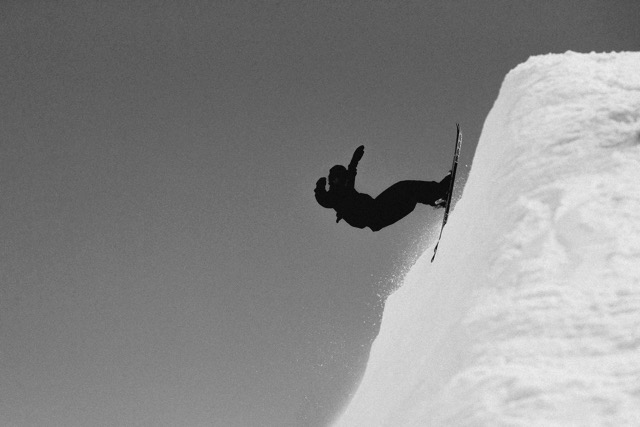 “I’ve always been a big fan of riding everything, whether it’s park or rails or halfpipe, so I wanted to do an event where you had to come and ride everything,” said Jossi. “And I think with the mini pipe it’s a bit cooler than having the main [22ft] pipe, as the main pipe is mad scary for a lot of people, and so the mini pipe is kind of a fun thing. The pipe riders are going to be able to rip it and excel for sure, but also the guys that are rail dudes will be able to rip the mini pipe too.” 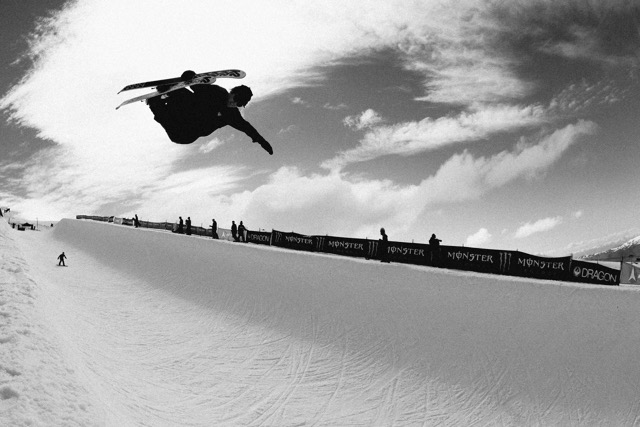 And rip it they did. Beau-James was in his element, Wacko and Jossi spent the session on their swallow-tail pow boards, tipping their hats to the spirit of shred camaraderie, Dane was finding lines where there were none, Finn was making the most of all the extra features in the pipe, and Henrik showed that he’s a dark horse in the stunt ditch and that hanging with Taylor Seaton has got to pay off in transition mastery eventually. 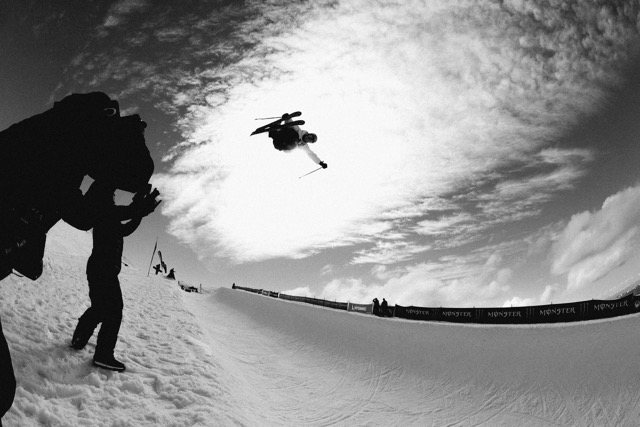 But ultimately it was Torin Yater-Wallace’s time to shine. Bruising a heel on the first day and spending most of the JWI stoking from the sidelines, it could only be Torin who was going to be able to boost that high out of a mini halfpipe, and he walked away with the Riders’ Choice for the day.

When all was said and done and bottles were popped at the afterparty, the consensus was still out. Aside from the good vibes, no one could list just one favourite thing from the event. Not even the rider-voted overall winner, Henrik Harlaut.

“It’s hard to say. All of it, pretty much,” said Henrik. “I really liked the rail jam, ‘cuz we don’t really get to do any rail jams these days, so that was super nice. But I don’t really get to ski pipe ever either, especially when the pipe is so slushy and so nice. It was so great. But I guess mainly the vibes have been the best. Everybody wants to push it and have fun. What an event. Thank you so much to Jossi and all the other shredders, it was so epic riding with everyone and I am so thankful and honoured to be rewarded Best Overall.”

Now that the sweet spot has been found somewhere between a contest and a photoshoot, and the love of the jam session rekindled in some of the sport’s greatest talents, what more can we look to in the future?

“I’m already looking forward to next year,” said Jossi. “I honestly couldn’t have hoped or asked for a better event. We had three amazing days of weather, the crew has been so supportive all coming down here, and riding hard – everyone just came and showed UP! These are three of the sickest days I’ve ever had on snow, and I’m just so grateful for that.”

What a time to be alive.

To feast your eyeballs on some of the most progressively fun riding that has ever happened in an Olympic year, type #JWInvitational into the ‘gram and scroll away.