Colby Stevenson and Alex Hall went blow for blow in a hotly contested final. But it was Stevenson who left with the gold medal at the conclusion of the 2021 Winter Dew Tour Men’s slopestyle on December 17 in Copper Mountain, Colorado.

With flat light and some speed issues on course, the jump action was subdued at this year’s Dew Tour slopestyle. However, that just put a greater focus on the creative jib section at the top of the course, where a number of rail-to-rail transfer options took center stage.

Alex Hall stomped his first run clean with a stylish backside 360 swap transfer and a lofty switch 270 gap in the rails, followed by a switch right double 10 safety, switch left double 12 mute and a left double 1620 japan to polish things off. He led the field after the first run, trailed by Evan McEachran with two 360 swaps and back-to-back switch 14s, and Oliwer Magnusson with his own back 360 swap transfer and a pair of 1260s. 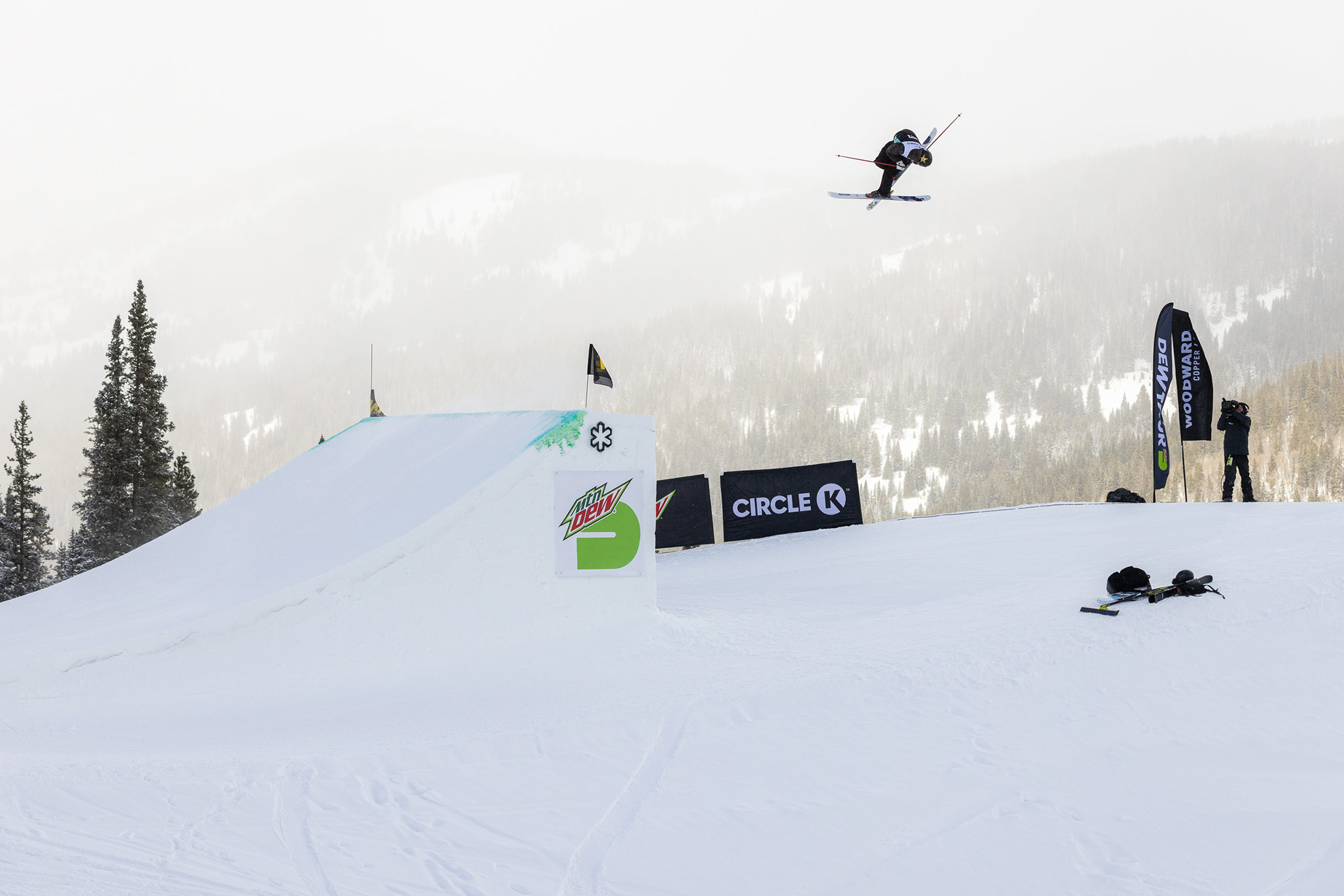 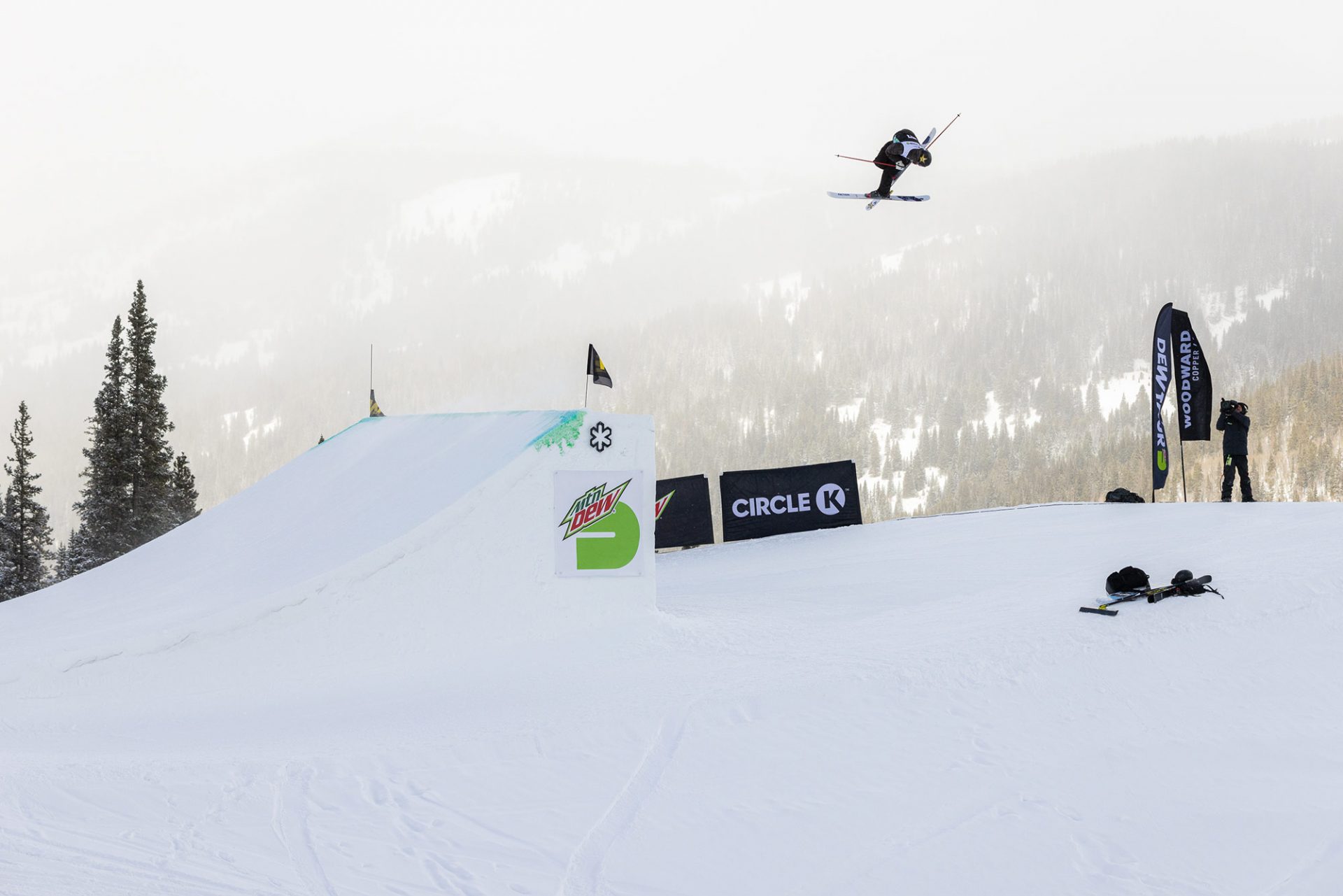 Normally Tom Wallisch's commentary is on point, but bro—you should be able to tell the difference between a seatbelt and a regular japan grab! Photo: Jamie Walter

In the second run, Nick Goepper clinched a solid run to slide into third place, with snappy 450s out of all the features in the rail section and polished double 1260s in the jumps. However, Stevenson upped the ante in his own run to take over the lead. Stevenson led off with a creative front 270 transfer to switch 50-50 to switch 360 out on the wallride feature, followed by a front 360 swap the other direction and an explosive disaster 270 on to 450 out of the down-flat-down rail—the only skier to hit that feature. In the jumps he linked a nose-butter left double cork 10 japan, right dub 12 mute and a switch double 14 stale grab, posting a score of 94.25. 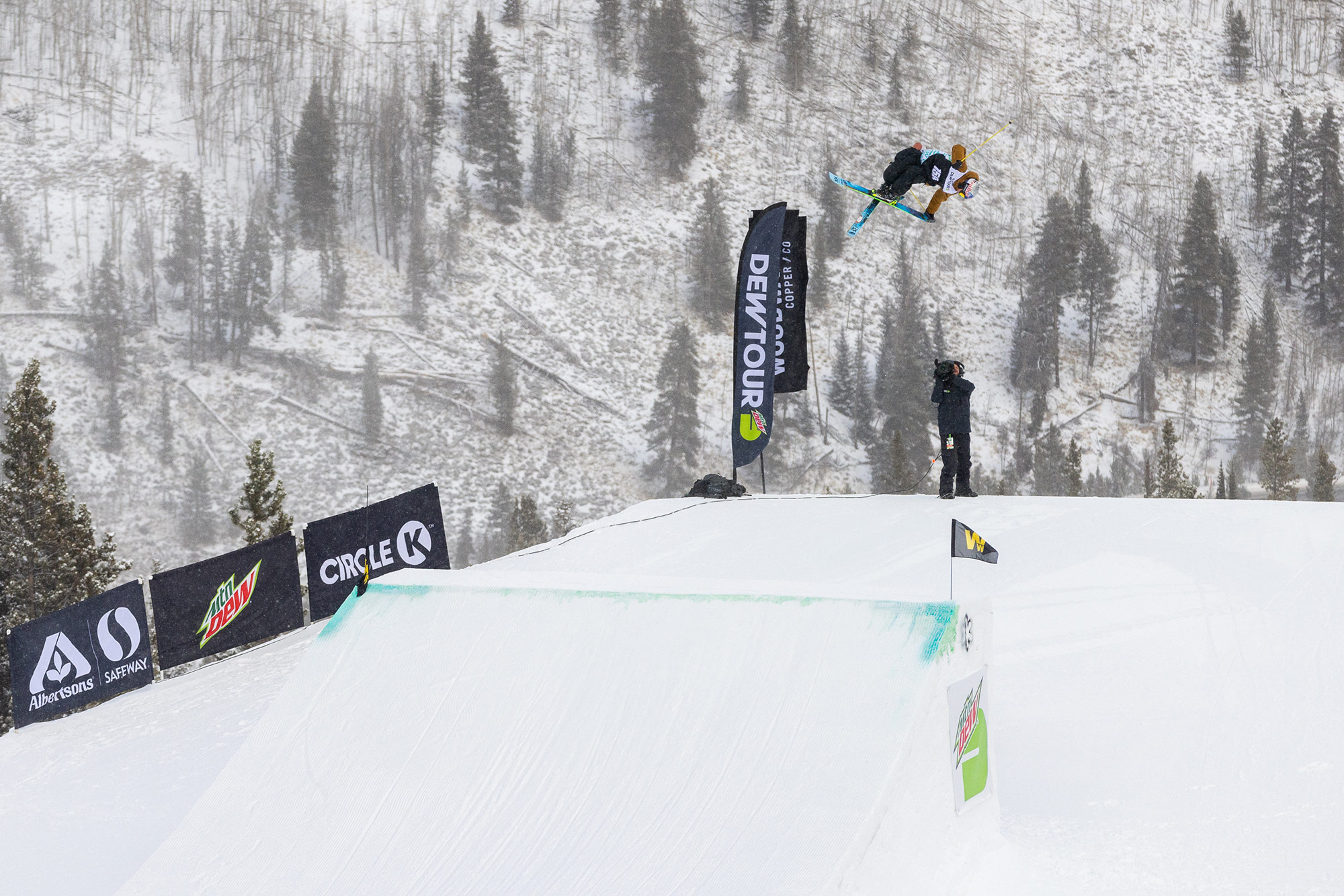 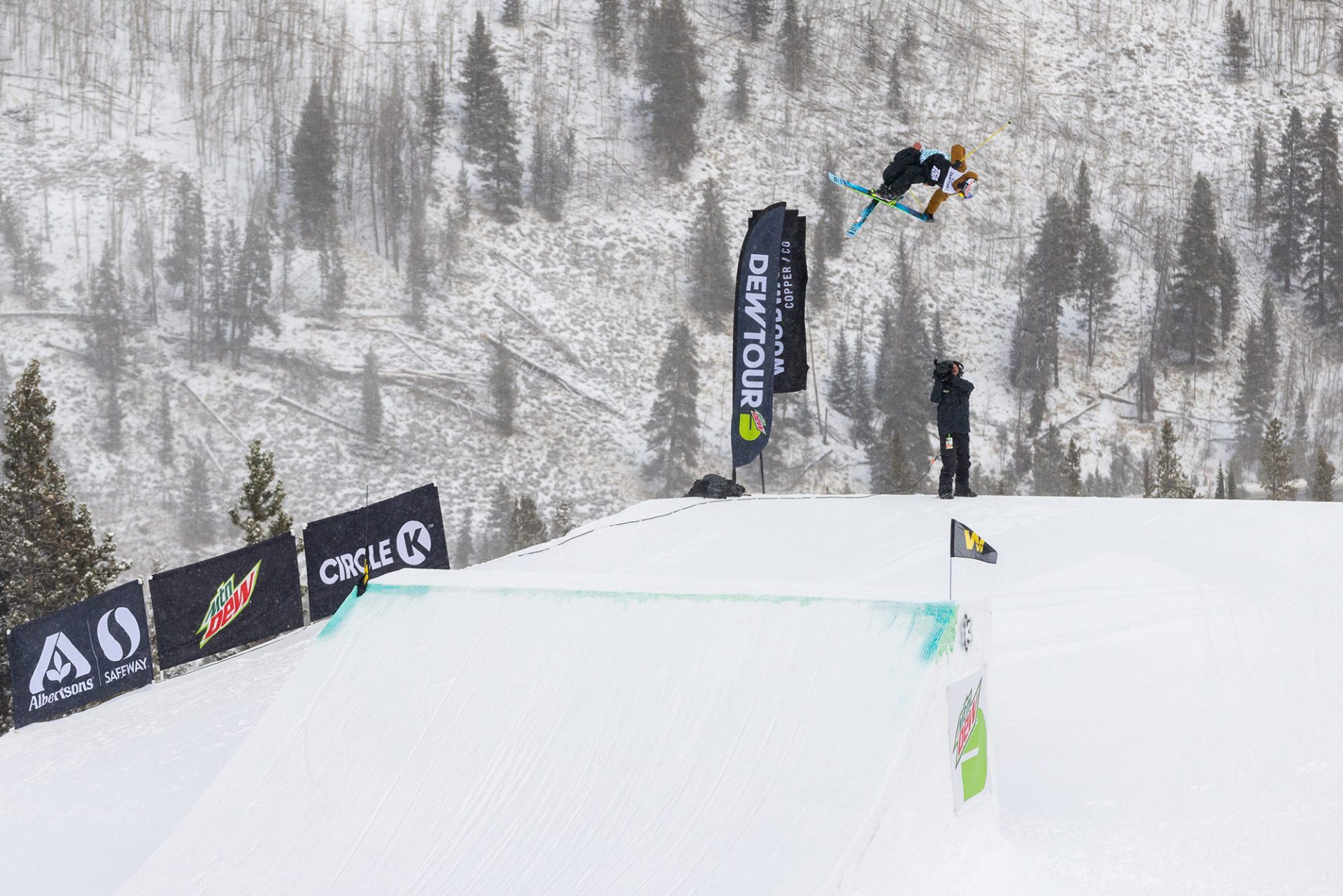 Possibly the most tenacious and determined competitor on the course, Nick Goepper clawed his way to a third-place finish as he eyes the path to his third Olympic Games. Photo: Walter

Hall hit back on the third run, stomping his run cleaner than ever to retake the lead. But Stevenson wasn’t content to let his friend walk away with the gold on this day. On the last run of the finals, Stevenson laced the rail section in perfect form and stomped his jumps too—only briefly missing the stale grab on the last jump before locking it in. The judges rewarded him with a 96.25, edging out Hall for first place.

“It’s so insane—the amount of years I’ve been doing Dew Tour and never had a good result,” said an elated Stevenson after his score was posted. “I tore my shoulder in 2018 on the last jump in finals, and then got fourth two years ago when we had it here. I learned that nose butter dub 10 today. To put all that down, coming down to the last run—I don’t know if I’ve ever clutched up like that.” 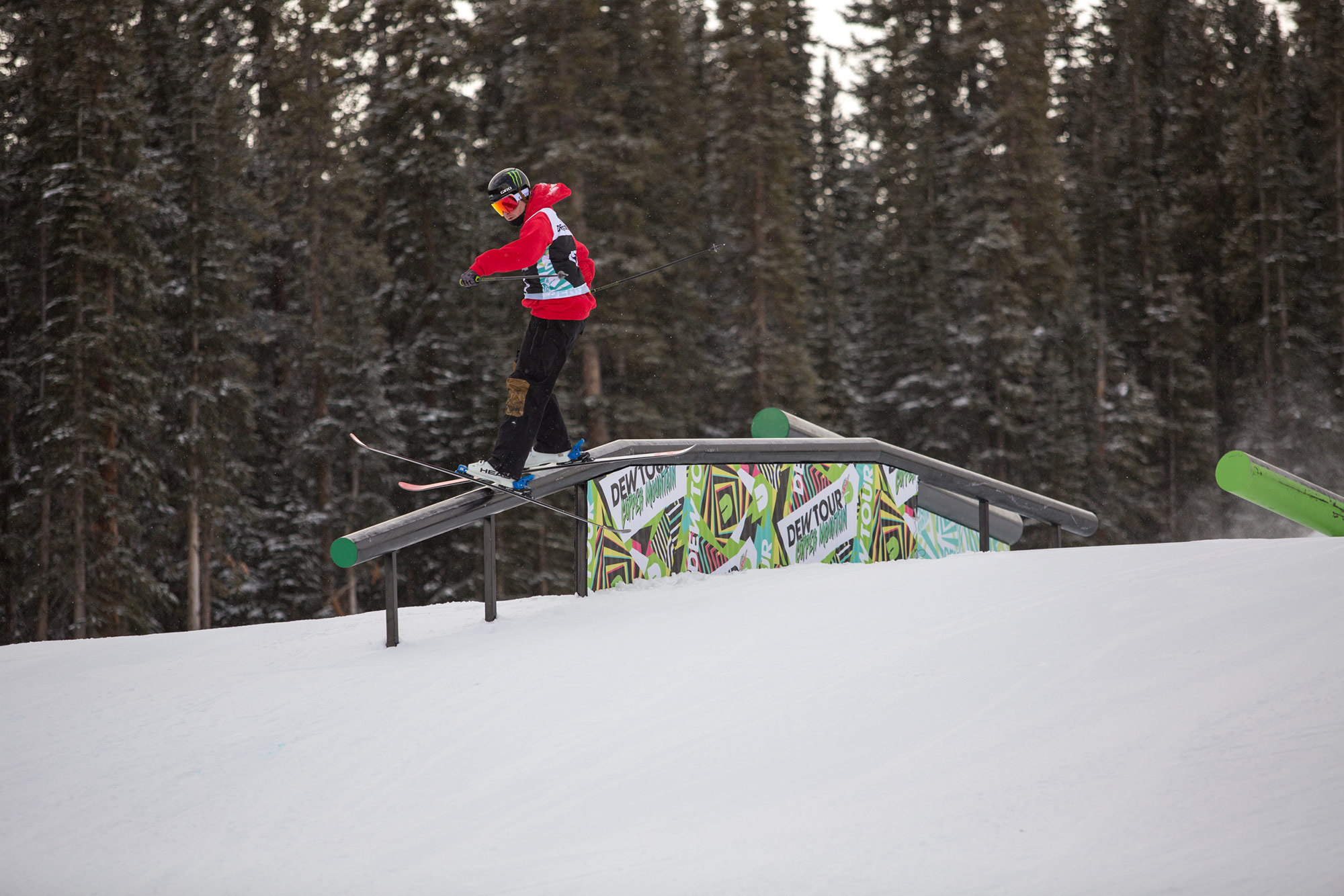 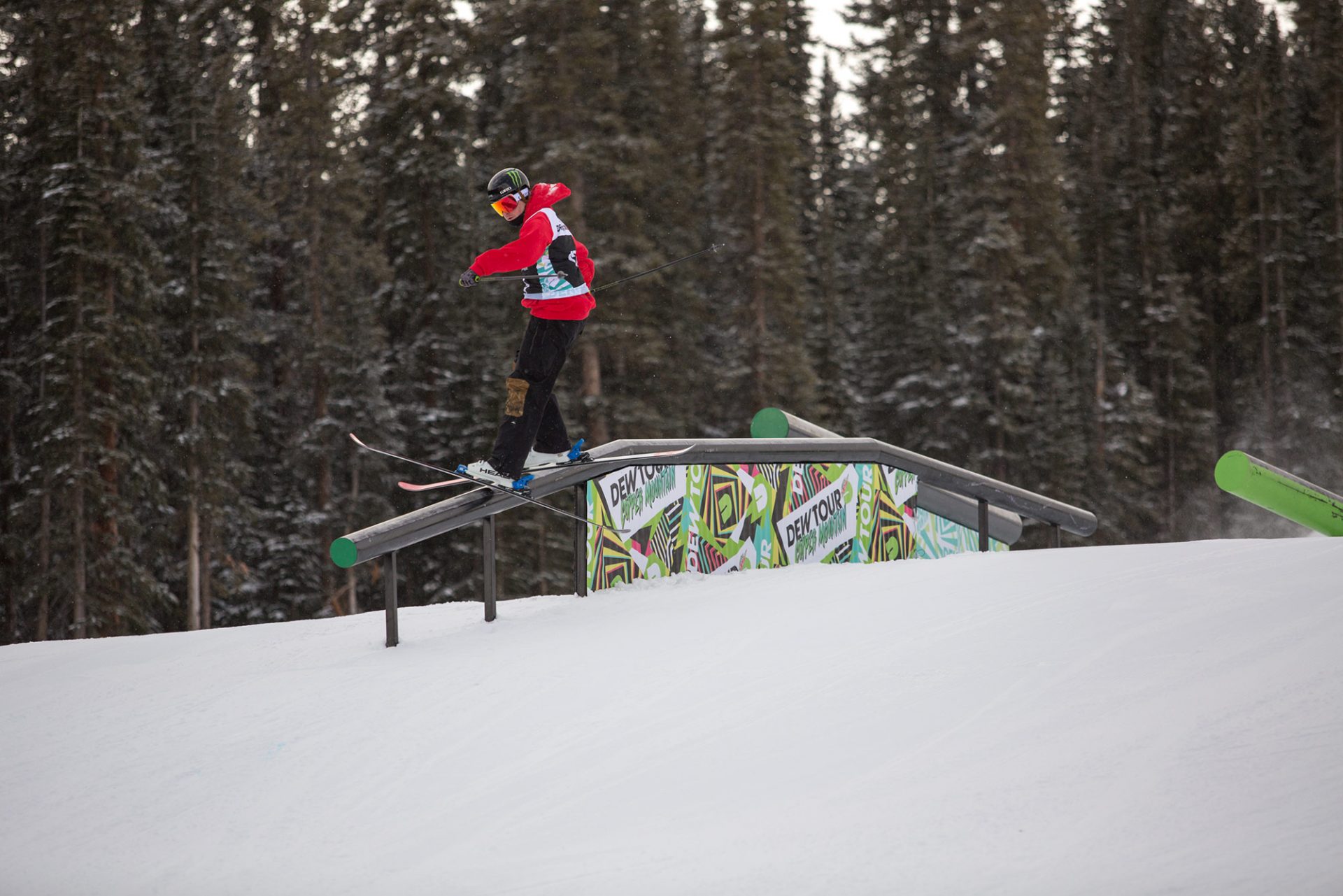 Evan McEachran showed off a few clean runs, but was closed out of the podium on this day. Photo: Andrew Durso

With his front 360 swap to front 450 out of the wall spinning to the left, and back 360 swap to backslide spinning to the right, followed by right and left switch double 14s, Canada’s McEachran was in the running for the podium throughout the finals, but landed in fifth overall. Switzerland’s Fabian Bösch was close behind him in sixth, helped by a frontside transfer to backslide to back 270 out and a massive leftside double 16 double japan in the jumps. 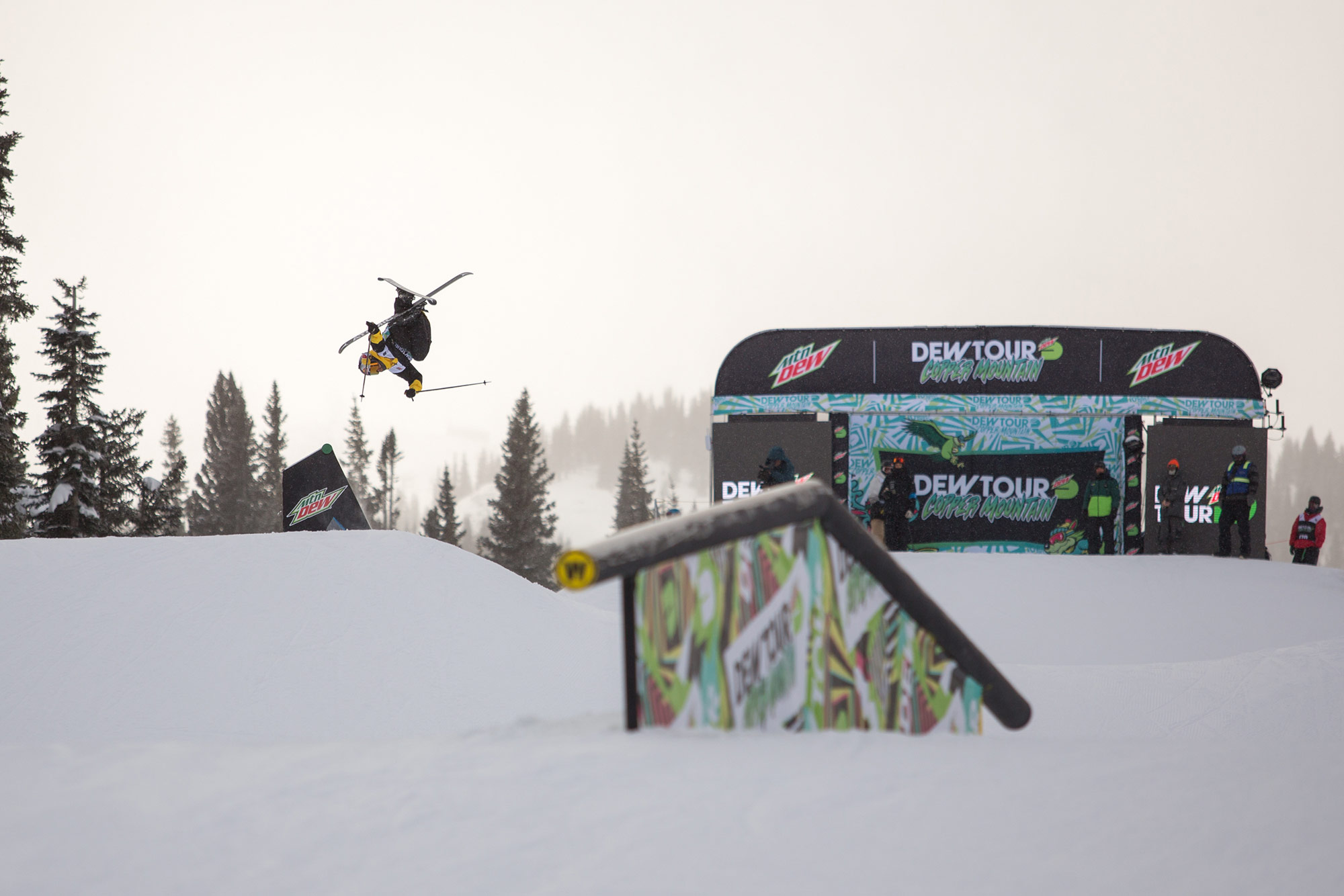 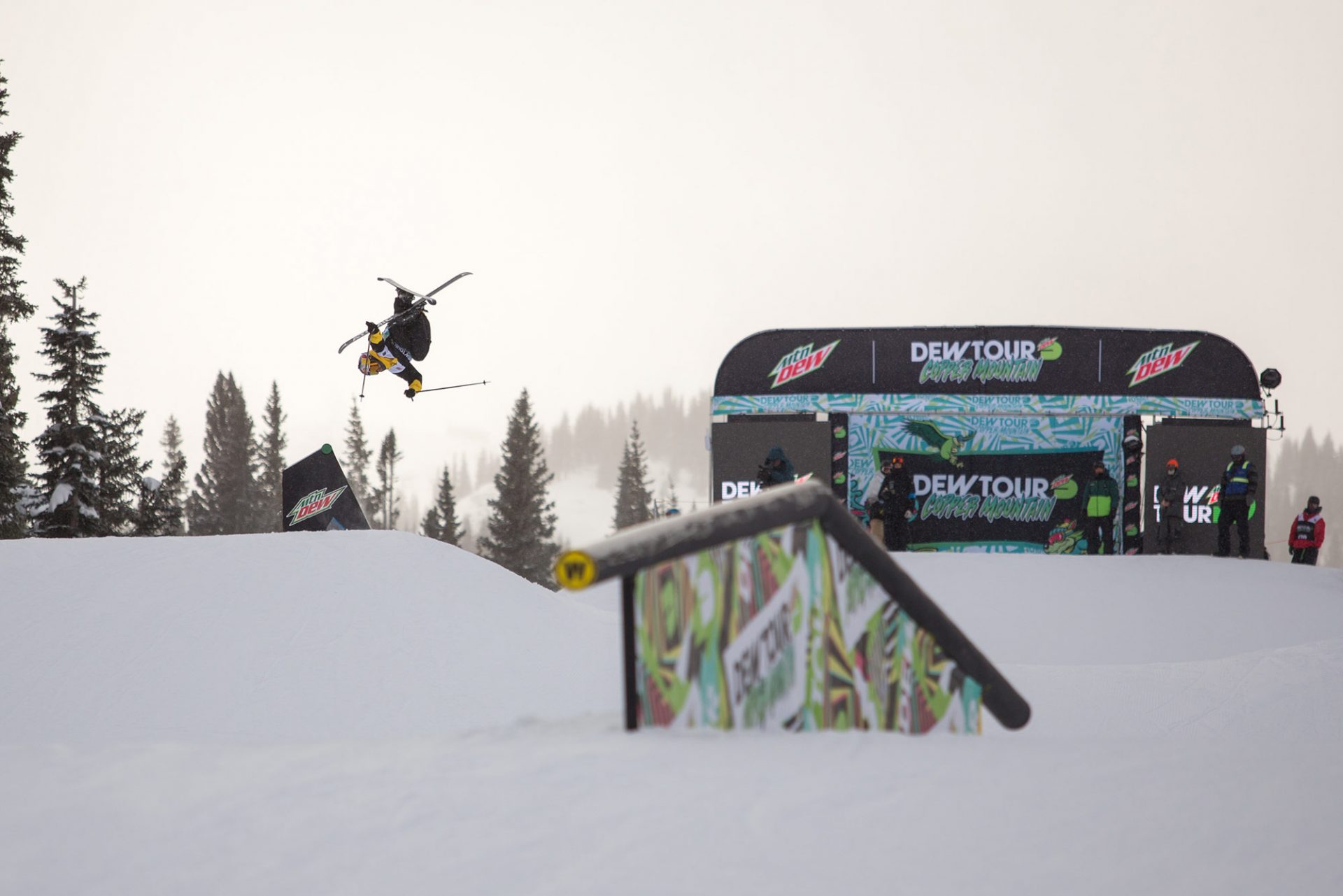 Fabian Bösch had a clean opener with a transfer into the wall followed by this flatspin 450 reverse mute. Photo: Durso

All in all, the level on course was extremely high despite the weather, with the top 8 finalists all posting scores in the 80s or above. 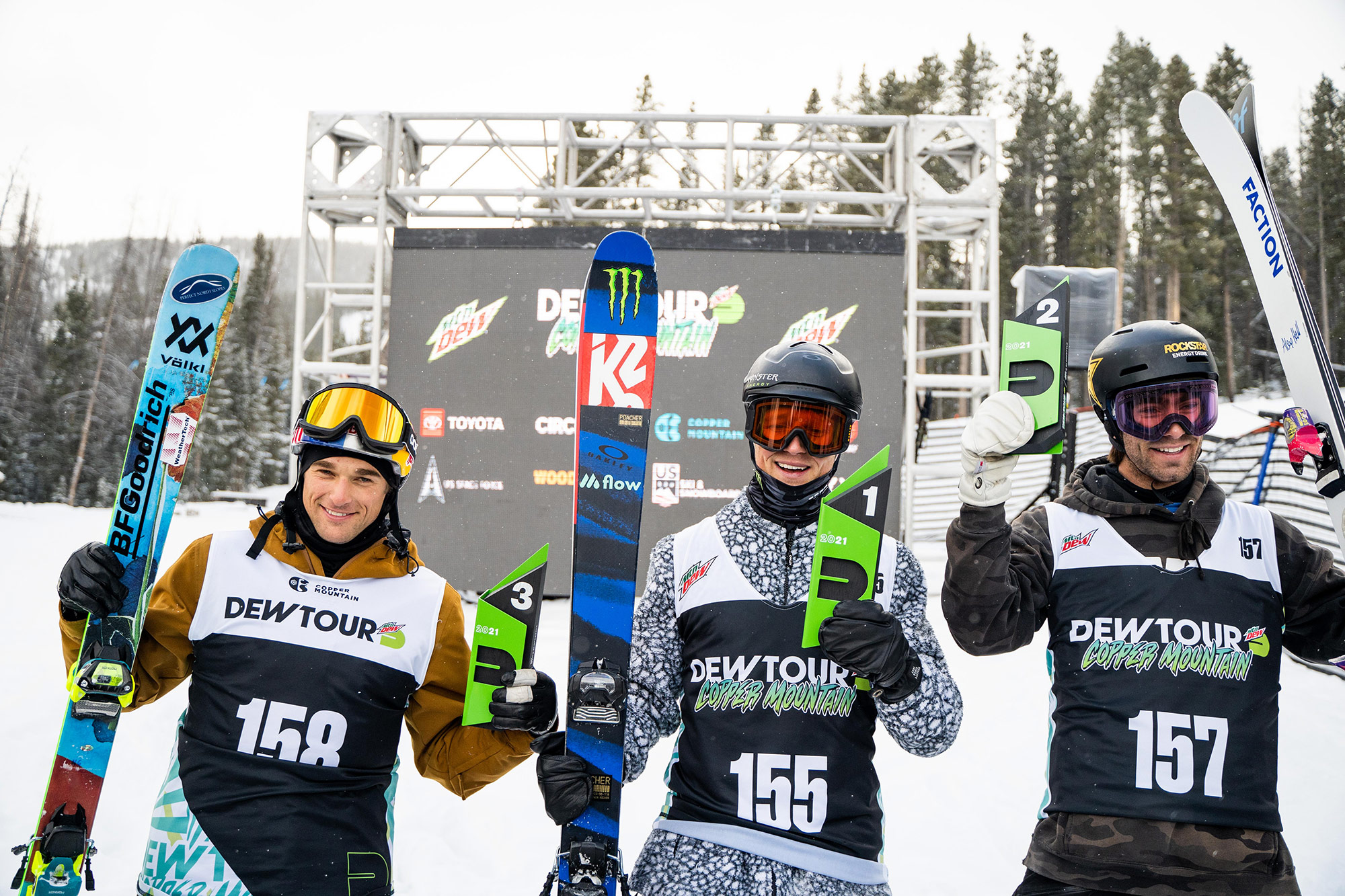 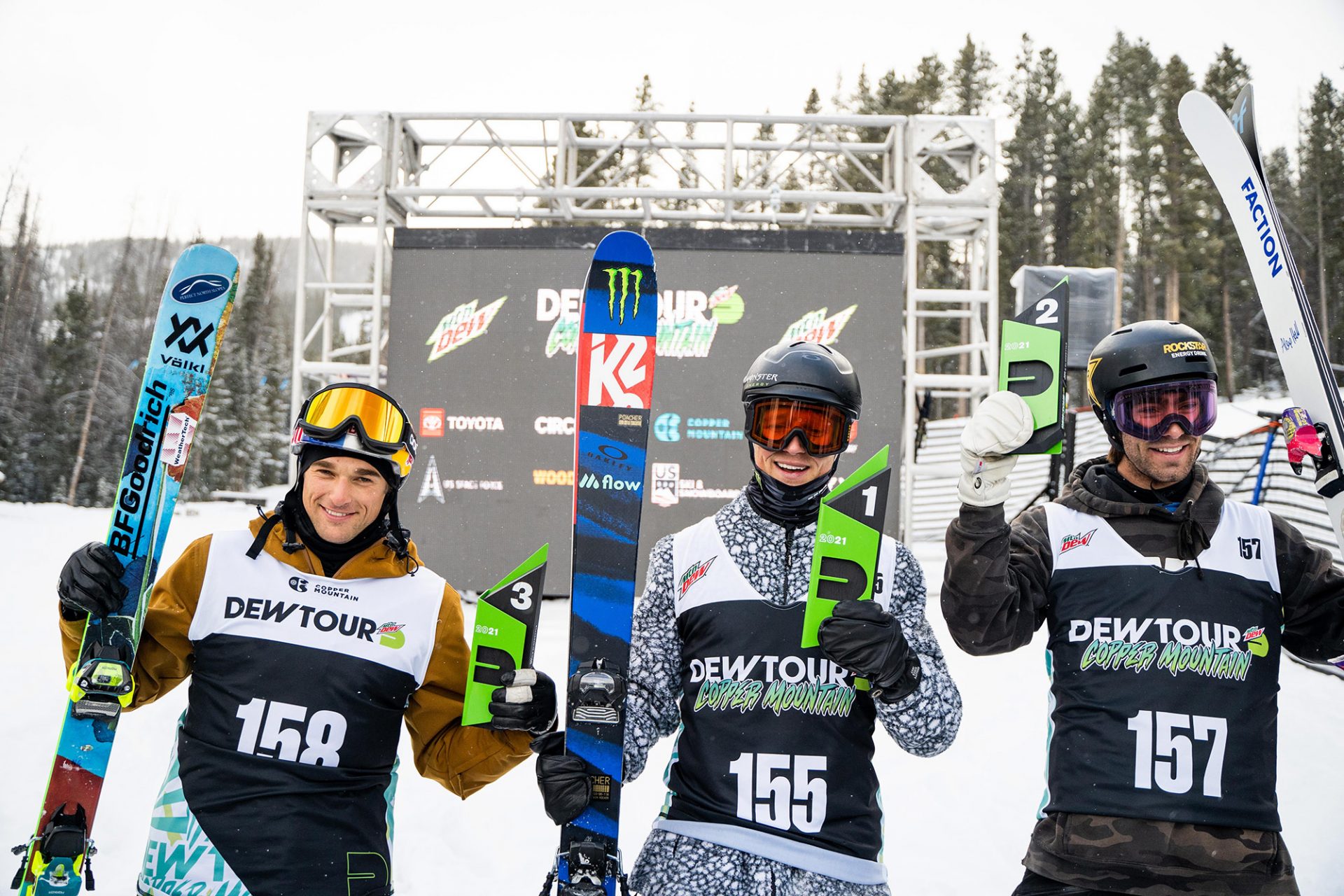