The slopes of Seiser Alm in South Tyrol, Italy played host to the second stop of the World Cup slopestyle circuit last weekend. American Caroline Claire snatched gold on the women’s side, while Norwegian Birk Ruud took the win among the men. 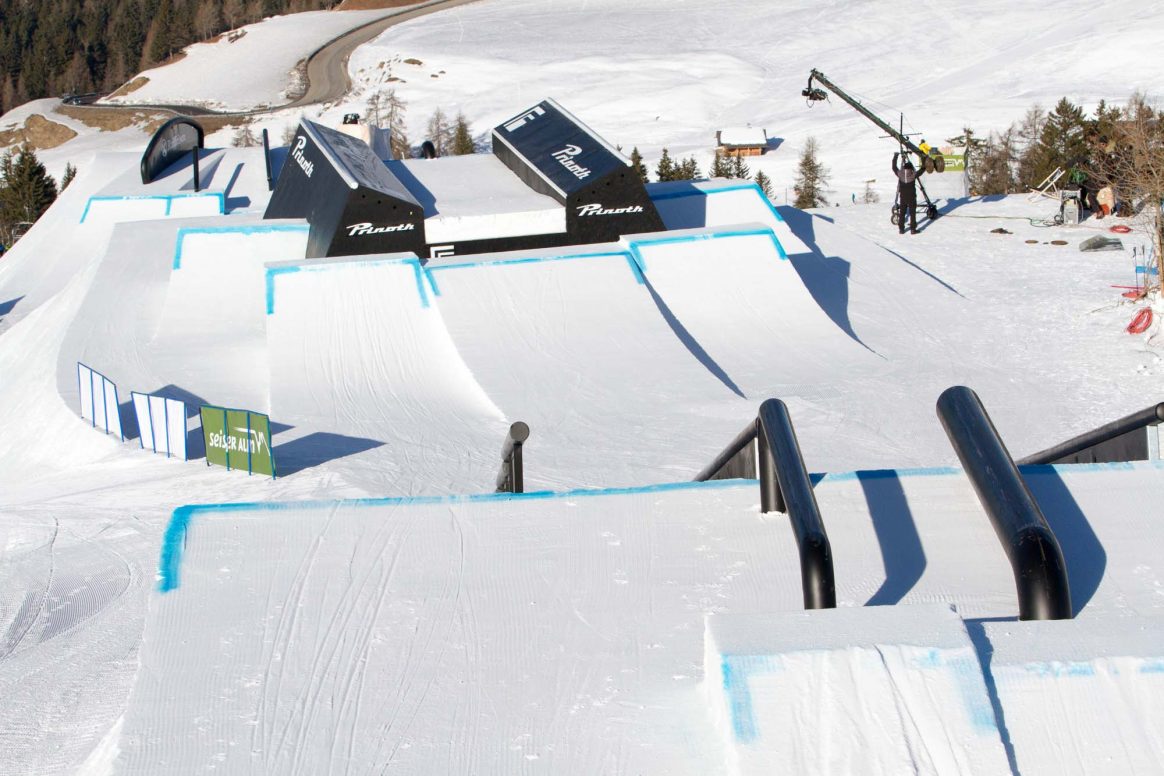 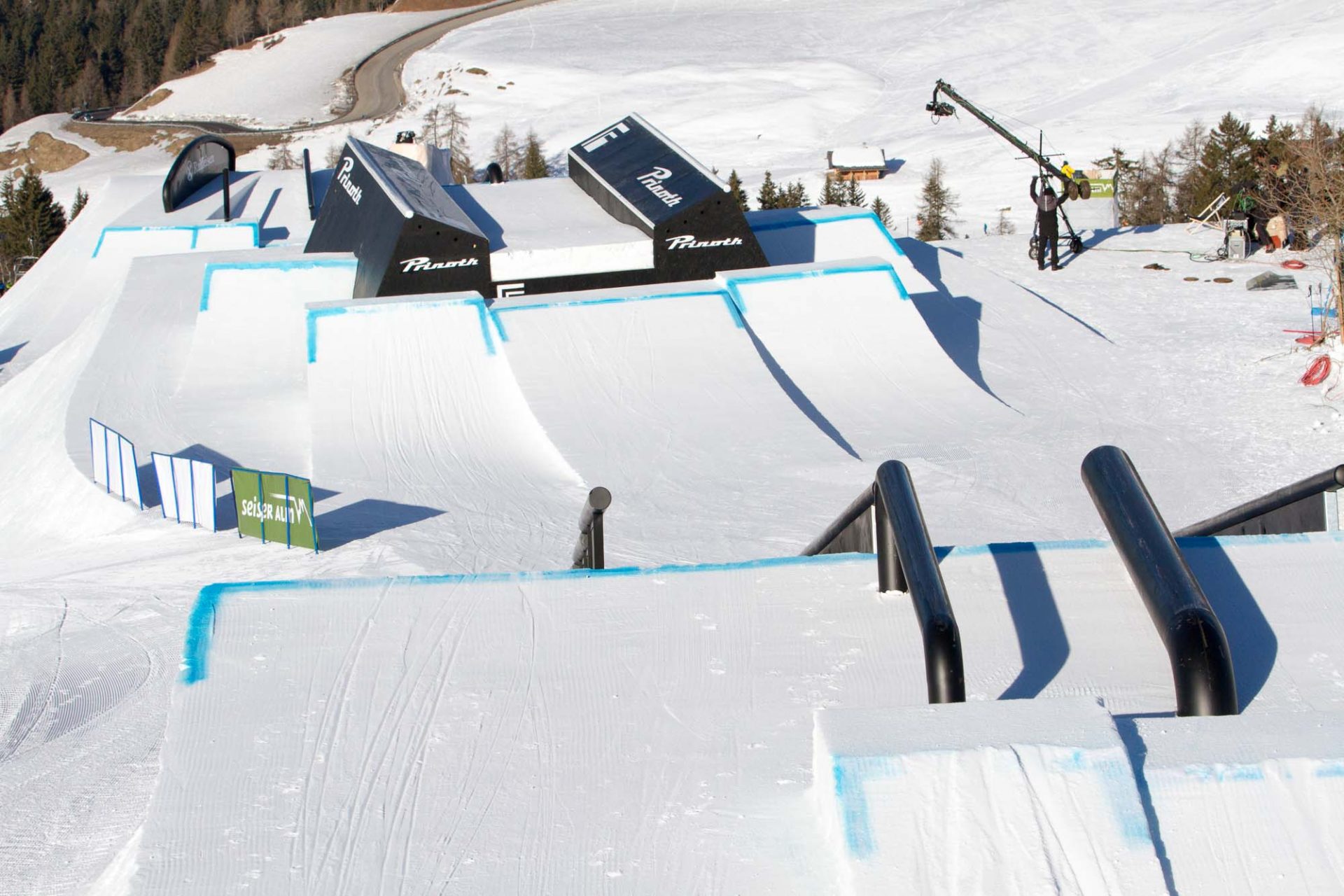 Among the world’s snowparks, few come as sculpted as the ones in Italy created by the F-Tech snowpark team. The Seiser Alm Legends course might be the pinnacle of them all. From squeaky-clean rail setups including the unmistakable Prinoth feature—a big, boxy set of angles with a complicated transfer option to a down rail—to a three-jump line that is nothing short of pristine, it’s clear that the Seiser Alm park crew and the community around them put a lot of energy into this event. The Legends team put more effort into media production this year, resulting in some great followcam and drone footage from the sunny training days leading up to the event.

“This year put a strong focus on social media,” said Seiser Alm Legends organizer Moritz Gruber. “We worked with Alex Meliss and a race drone, getting some really cool footage and putting it online immediately. We’re super happy to have more social media coverage—we’ve been slowly building our brand, so it’s going in the right direction.”

Qualifiers kicked off on Friday, November 18 at 9:40am sharp as the men’s first heat battled firm morning conditions. I arrived at the course about halfway through the men’s second run, just in time to witness a small drama play out. Alex Hall had missed the cut for the finals, and the American coaches had a bone to pick with the judges on the score. (Apparently there’s a short time window after the fact when a score can still be adjusted.)

Colby Stevenson ended up taking top spot in the first heat with a clean, creative rail line and some heavy double corks grabbed stale in the jumps. He was followed into the final by the hungry Swiss duo of Fabian Bösch and Andri Ragettli, stylish American up-and-comer Ryan Stevenson, and a pack of assorted hopefuls in the UK’s Tyler Harding, France’s Antoine Adelisse, Etienne Geoffrey Gagnon of Canada, and Lukas Müllauer from Austria. Missing the cut were A-Hall, Oscar Wester and Japanese rider Taisei Yamamoto.

Nick Goepper lofted out this triple cork 1440 and still couldn't break into finals.

A crowd of curious onlookers grew.

A-Hall didn't crack the finals, but here's a shot of his seatbelt japan anyway.

Can't shoot a slopestyle at Seiser Alm without getting this angle.

Colin Wili was skiing strong after coming back from an MCL injury last winter.

Javi Lliso's huge carved doubles stand out like no other rider's.

Switzerland's Kim Gubser missed his shot at the finals this time around.

As the dust of the heavy men’s heats settled, the women took to the course to decide which eight ladies would appear in the finals. With a clean, conservative run anchored by her signature cork 900 tail, Norway’s Johanne Killi took the top qualifying spot. She was followed by rookie teammate Sanda Eie in second and the US’s Caroline Claire in third. The Swiss stars Mathilde Gremaud and Sarah Hoefflin also made the cut, as did Canada’s Elena Gaskell, Austrian Lara Wolf and Margaux Hackett of New Zealand.

After several years out due to injury, Katie Summerhayes made her return to World Cup slopestyle, just missing the finals cut.

Elena Gaskell has a clean 900.

Giulia Tanno in the rails.

After weeks of sunshine leading up to the contest, cloudy skies and a touch of snow were forecast for Saturday’s finals. Thankfully the weather held out for much of the day, with just a thin cloud layer coalescing around the imposing spires of the Schlern, the towering Dolomite peak that’s Seiser Alm’s trademark.

The women dropped in first. Margaux Hackett kicked things off with a clean rail transfer and a polished switch right bio 900 safety for a score in the mid-60s. Austrian hopeful Lara Wolf was hoping to put a new double cork 1260 on display, but unfortunately came up short and crashed, as did Sarah Hoefflin on a switch double 10. Mathilde Gremaud showed off an impressive rail section including a lip 270 on and a big transfer, but needed to clean up her run. Gaskell and Eie both showed off nice 900s, but it was top qualifier Johanne Killi who moved into first with a polished run through the rails, her cork 9 and a pair of switch 720s.

Johanne's cork 9, on point as usual.

Mathilde Gremaud stepped it up with a lip 270 on in the finals.

Caroline Claire led off her jumps with a 540 safety, but she had big things planned.

Elena Gaskell showing off for the crowd.

If Sandra Eie can dial in that cork 9, she'll surely be a podium threat in the future.

There were several crashes in the men’s first run as competitors struggled with some speed issues, and it wasn’t until halfway through the heat when Colin Wili broke into the 70s with a 450 on, pretzel 270 out on the first rail, backed up with a clean 10, 12 and switch 14 in the jumps. Fired up to be in his first finals, Javi Lliso stepped things up with a big lip 450 disaster and three massive 1260s. His score would hold for first place until the big dogs from the qualifiers stepped up: Bösch, Colby Stevenson and Øystein Bråten, who quickly moved to secure the podium.

Antoine Adelisse's trip 16 to pre-nose switch dub 10 was a highlight of the day.

Birk had dialed in the fine art of transferring to the Prinoth feature's down rail.

Colin Wili is one to keep an eye on.

Etienne Geoffrey floats one of the final's few triples.

Finn Bilous on the transfer.

Javi Lliso on a moon mission.

One thing this contest showed: if you can't even do a front cork 630 out of an up rail, what are you even doing here? It's all Øystein Bråten's fault.

The UK's Tyler Harding made a good showing.

On the women’s second, run, Hackett crashed, Wolf opted out of her double cork, and Hoefflin again couldn’t put her run down. Elena Gaskell put down a clean run with three 900s for a crack at the podium, while Mathilde Gremaud slipped up on her first front-swap rail transfer, but held on to put down a solid run nonetheless. The surprise of the day came from Caroline Claire, who unpacked a switch double 900 grabbed safety, bumping her into first ahead of Johanne Killi, who was unable to improve on her first run. The final women’s podium: Claire in first, followed by Killi in second and Gaskell in third.

“I’ve been here a couple of times and I’ve skied well here, so I just kind of had a chill day,” said Caroline Claire. “The course was really good and everyone was skiing great. I didn’t have a great first run, but kind of pulled it together for my second run. I changed up my run last minute and added a switch 9, and it ended up being my highest scoring trick. I haven’t done it in competition before, so it was pretty cool to land it.”

Starting off the men’s final run, Ryan Stevenson got hung up in the rails but still threw down in the jumps. He and sidekick Tim Ryan definitely won the hype-men awards for the day (just watch the livesteam replay for proof). A couple riders brought out triples: Etienne Geoffrey with a big switch triple 12, and Antoine Adelisse who stomped the jump combo of the day, a triple cork 16 mute into a pre-nose switch double cork 1080. But even with these big tricks, small mistakes elsewhere in their runs kept them off the podium—perhaps as a result of the new judging system now in its second year, which gives equal weight to all the features on the course.

As the number of remaining riders dwindled, Javi Lliso made serious podium moves, floating his lofty carved spins into third place. Ferdinand Dahl was stymied by speed, and Andri Ragetti came off early on the Prinoth feature and almost accidentally 360 transferred onto the down rail. With four riders left to go, Birk Ruud came out swinging, lacing a clean transfer on the Prinoth feature and going full send in the jump line with a 12, a 14 and a double 16 safety to cap it off, springing into first place with a score of 92.91. Bösch put down a better run than before, but not enough to beat Ruud, Øystein crashed, and Colby put down another big run but was a touch off in the jumps and remained in third. The men’s podium was fixed: Colby in third, Bösch in second, and Birk Ruud with his first World Cup slopestyle win.

“I had a little bit of difficulty on the first run with the speed,” said Birk Ruud. “But we have a good team, and they told me that I had to just go all in and boost to get the speed. I focused and did what they told me, did what I told myself, and managed to make it through.”

“I thought that this season I would be stronger at the big airs, and after the Modena Big Air I was super disappointed,” said Fabian Bösch, explaining that his new big-air trick, a double flatspin 12 screaming seamen, hadn’t been well received by the judges. “I didn’t have any tricks that I could show to do better. After bruising my heel in China, Big Airs weren’t really going my way. Now I’m back after a three weeks’ break to let my heel rest. The first competition already went well, I was happy with fifth place in Font-Romeu, and to stand on the podium here is insane.”

“I was worried about the switch double double 14 on the last jump,” he added. “In the first run of the qualis I went too early on the takeoff and caught an edge, a rookie mistake—something you never do for a switch double 14. I twisted my knee and was a bit scared of doing it again. But it worked out really nice today.”

After a forecast that had kept the organizers worried, the day’s results were a welcome relief. “At first it was a little sketchy, but in the end we got lucky with the weather,” said Moritz Gruber. “We even saw some rays of sunshine. The riders were happy and rode at a really high level. It was freeskiing at it’s finest, so we’re very happy.”

“The park is built so that riders can really push the limits and we saw some next-level stuff,” he added. “I think we’ve shown that at Seiser Alm we can hold our own with the top events worldwide. We’ll see where it goes in the future.” 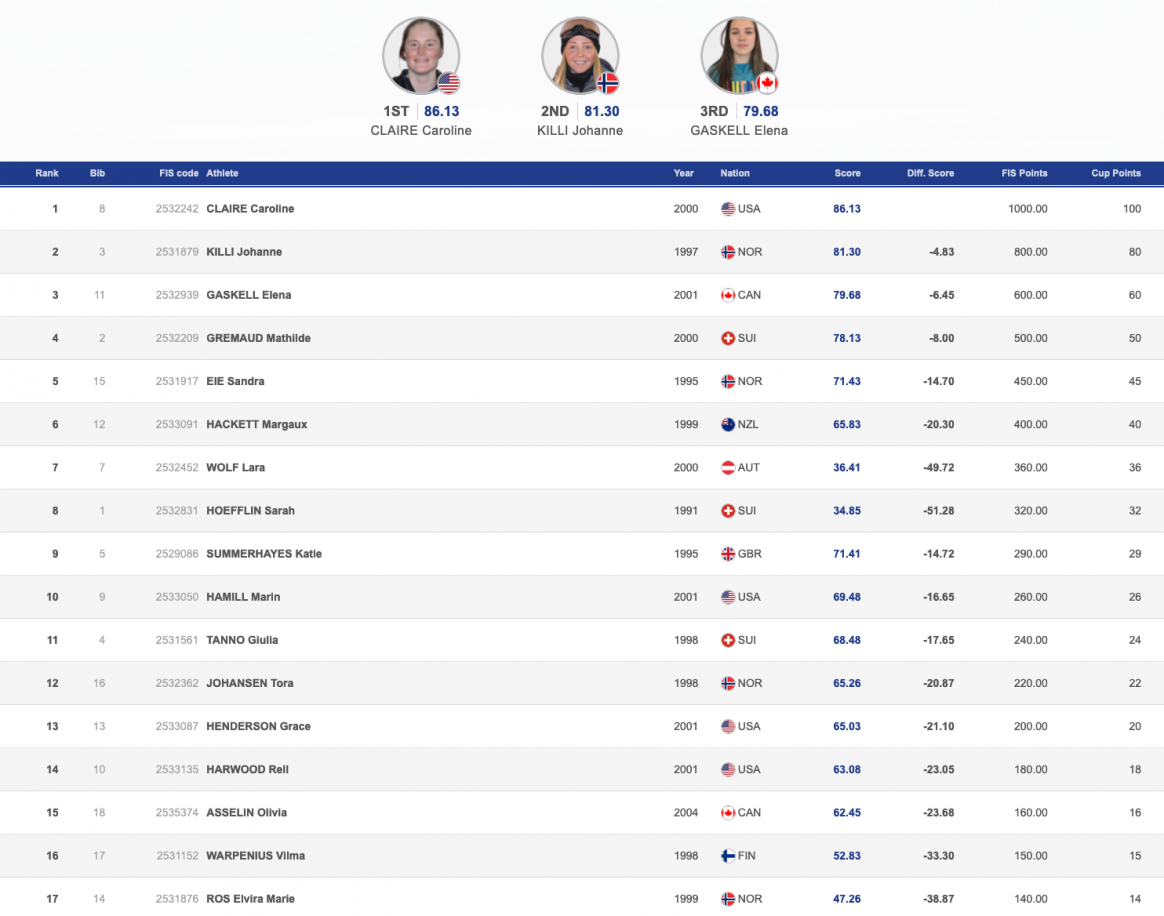 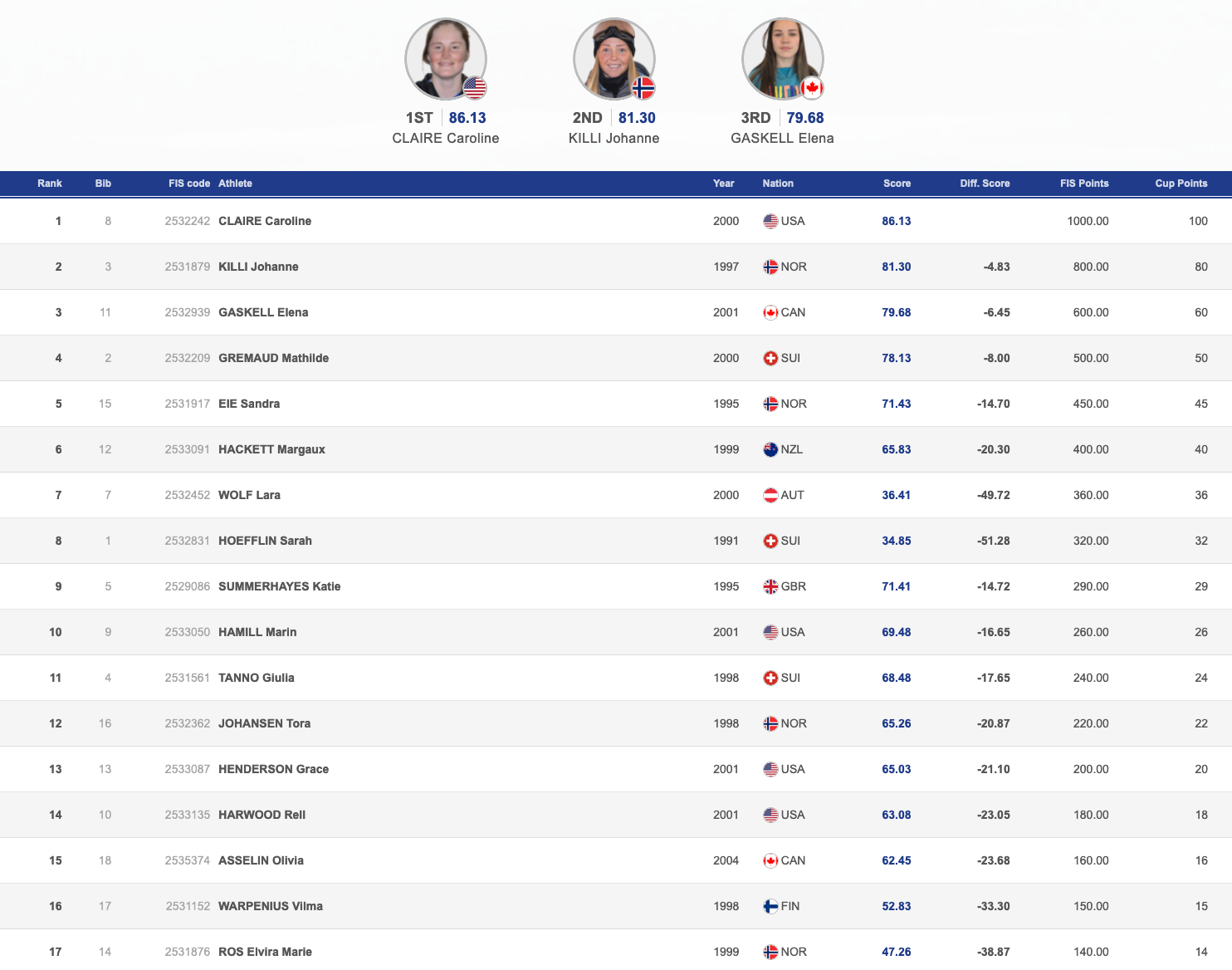 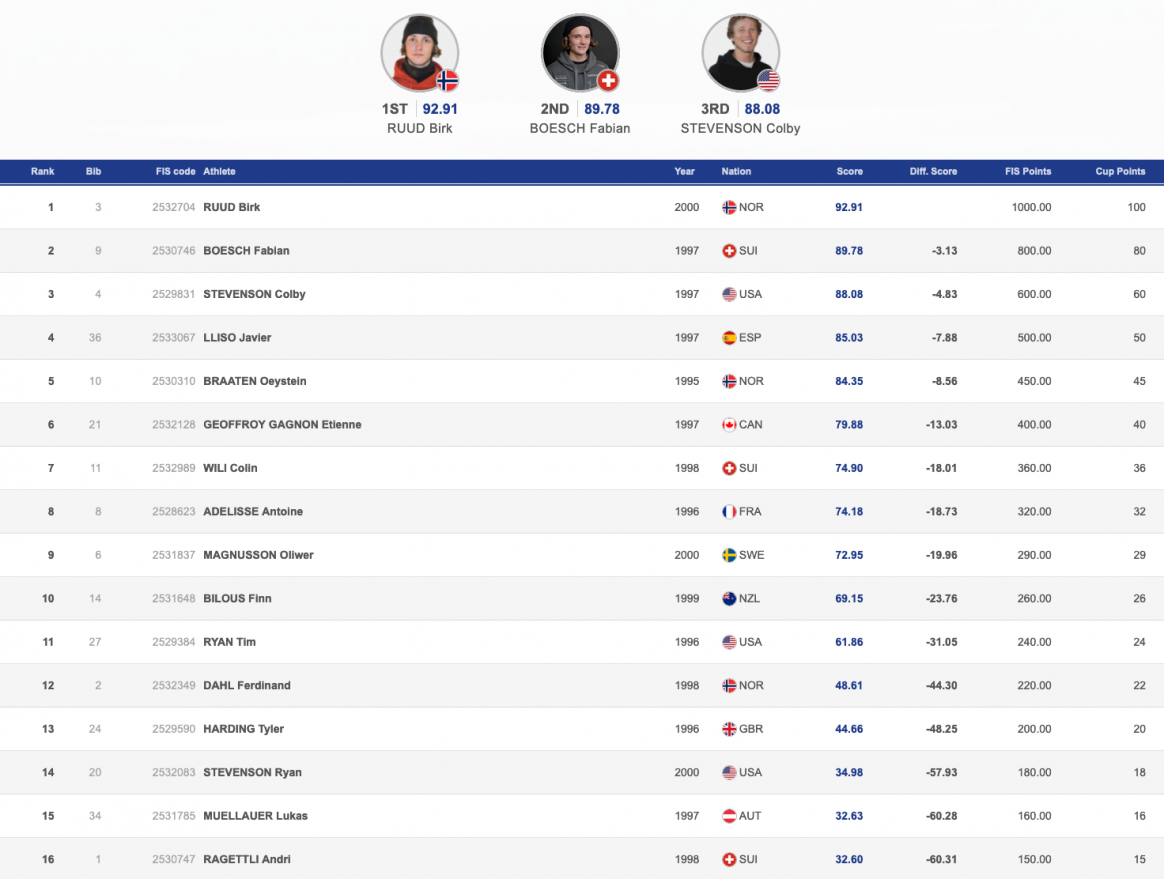 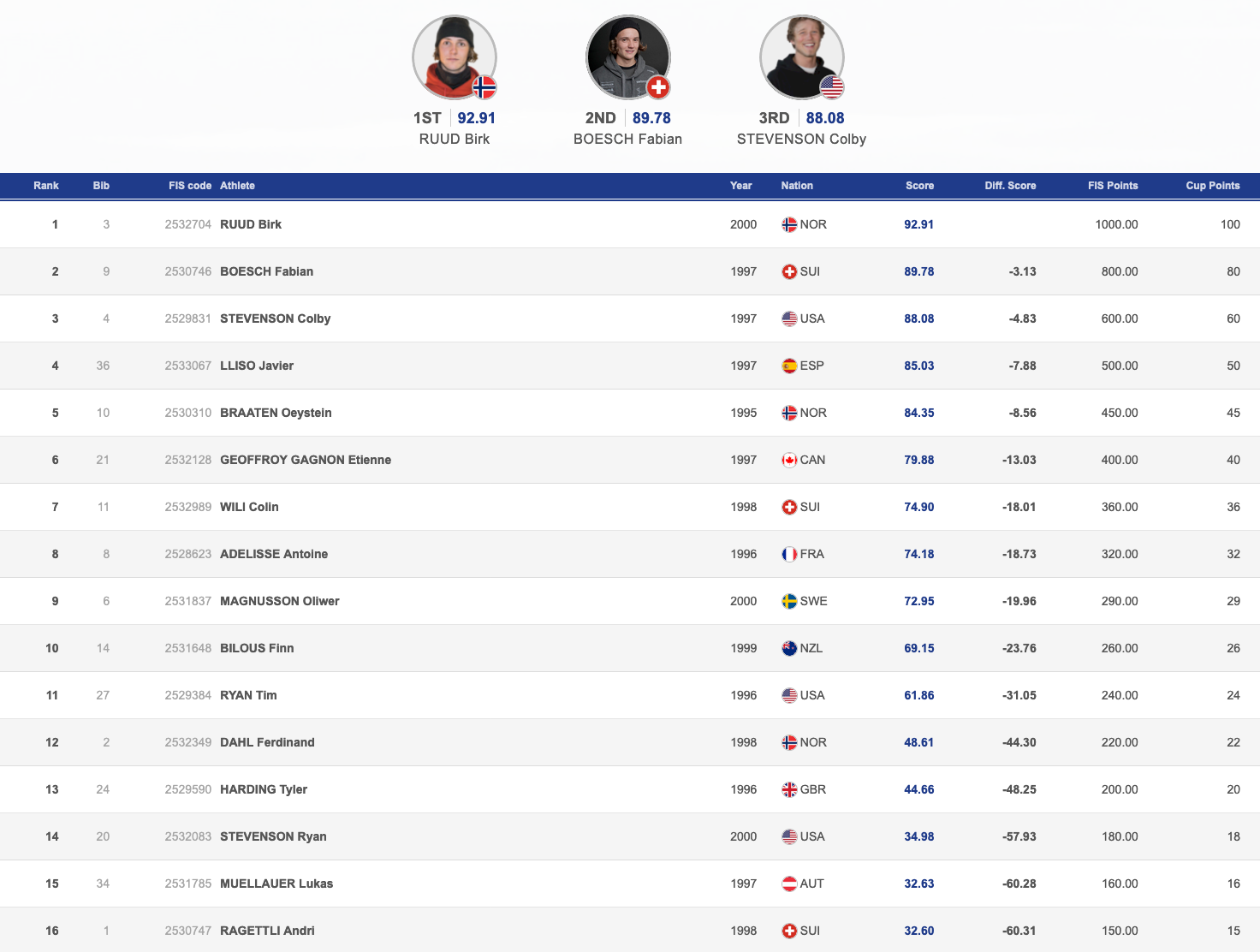