It’s Kimbosessions 2018 and Freddie Grann is ready to drop his edit with shots from last year’s event, as well as some other clips from last season. It’s good timing, since his artwork is currently being shown in the Kimbosessions park: a collection of sculptures adorning knuckles and serving as bonk features, contributing to the unique atmosphere of this event.

I sit down with Freddie after a long day of skiing in Kläppen to watch his edit together, stopping the video periodically to ask him some questions and learn more about the man behind the artwork, on skis and off.

Freddie Grann
Age: 26
Hometown: Bålsta, 35 minutes outside Stockholm
Home mountain: “I don’t actually have a home resort. There’s a small slope near my house, but I haven’t been skiing there much. I’ve been skiing in Kläppen a lot the past few years. My family used to have a trailer there in the campground.”
Sponsors: Majesty Skis, Kask, Lead Fabrics, 10 Peaks Gloves
Website: freddiegrann.com 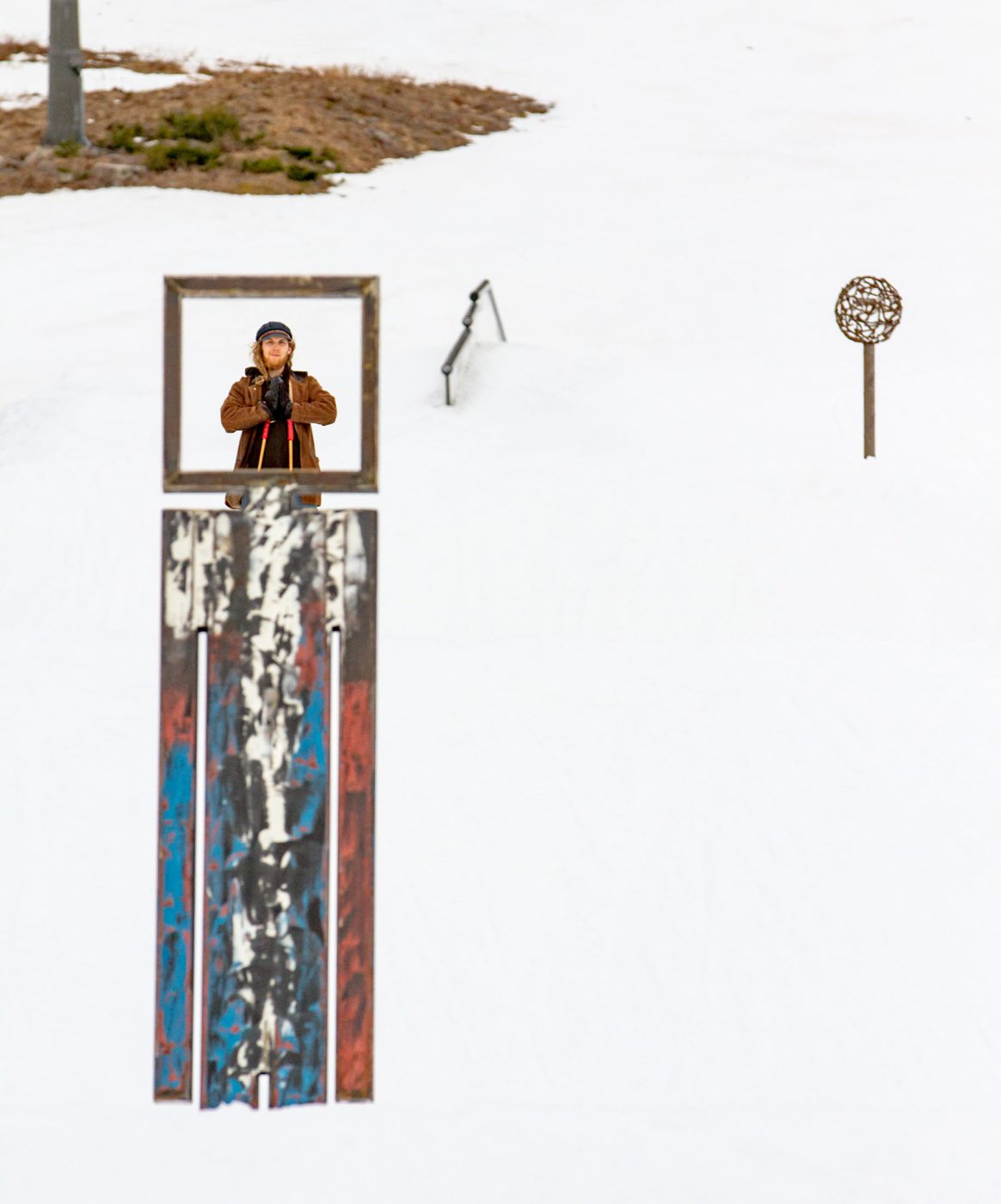 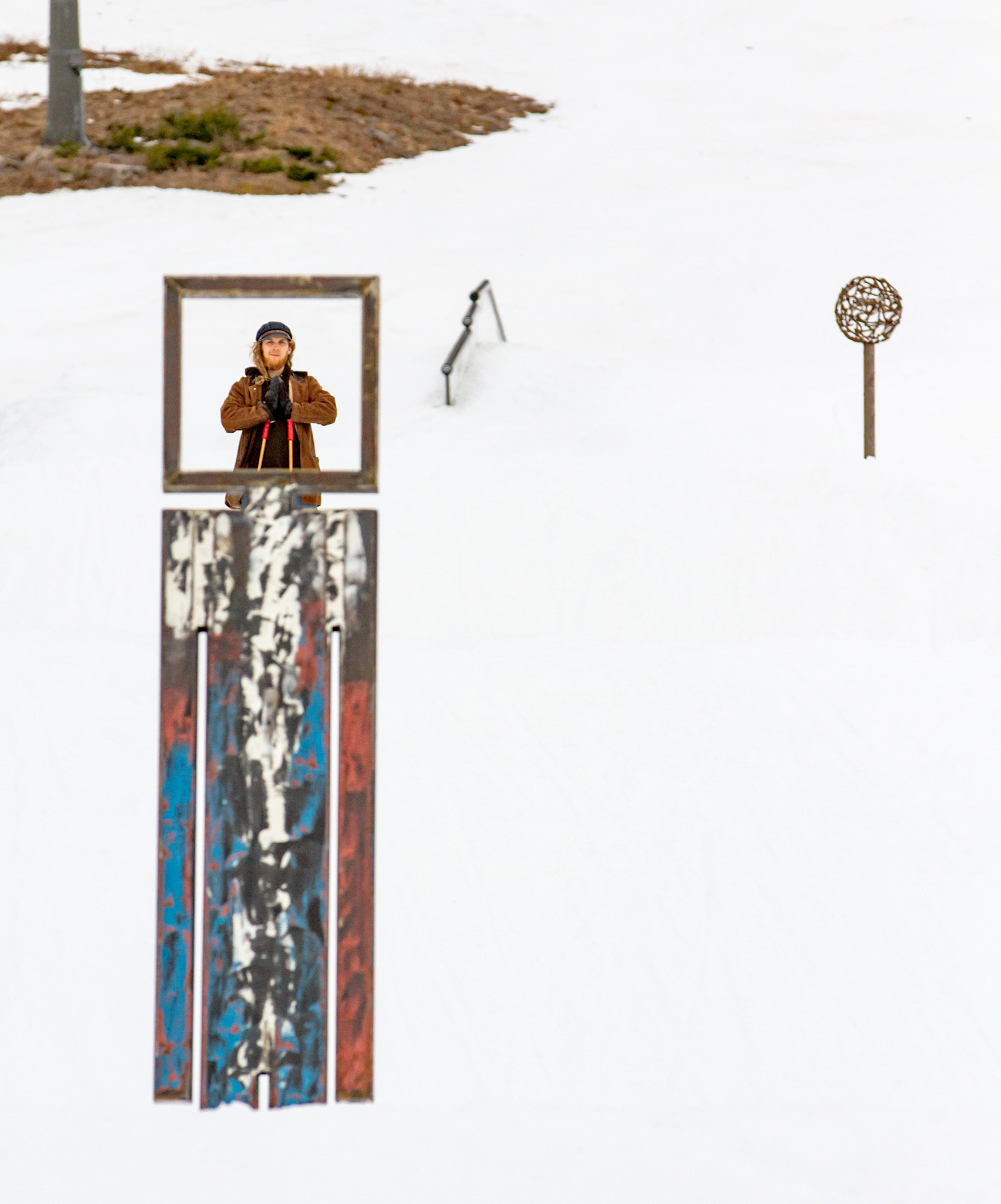 [00:45] Why YODO?
I have no idea. It just kind of popped up in my head. You live many days, but you only die once. So you need to live every day, and whatever the future brings, you’re going to die one day. It’s the goal of your life to die, in a way. 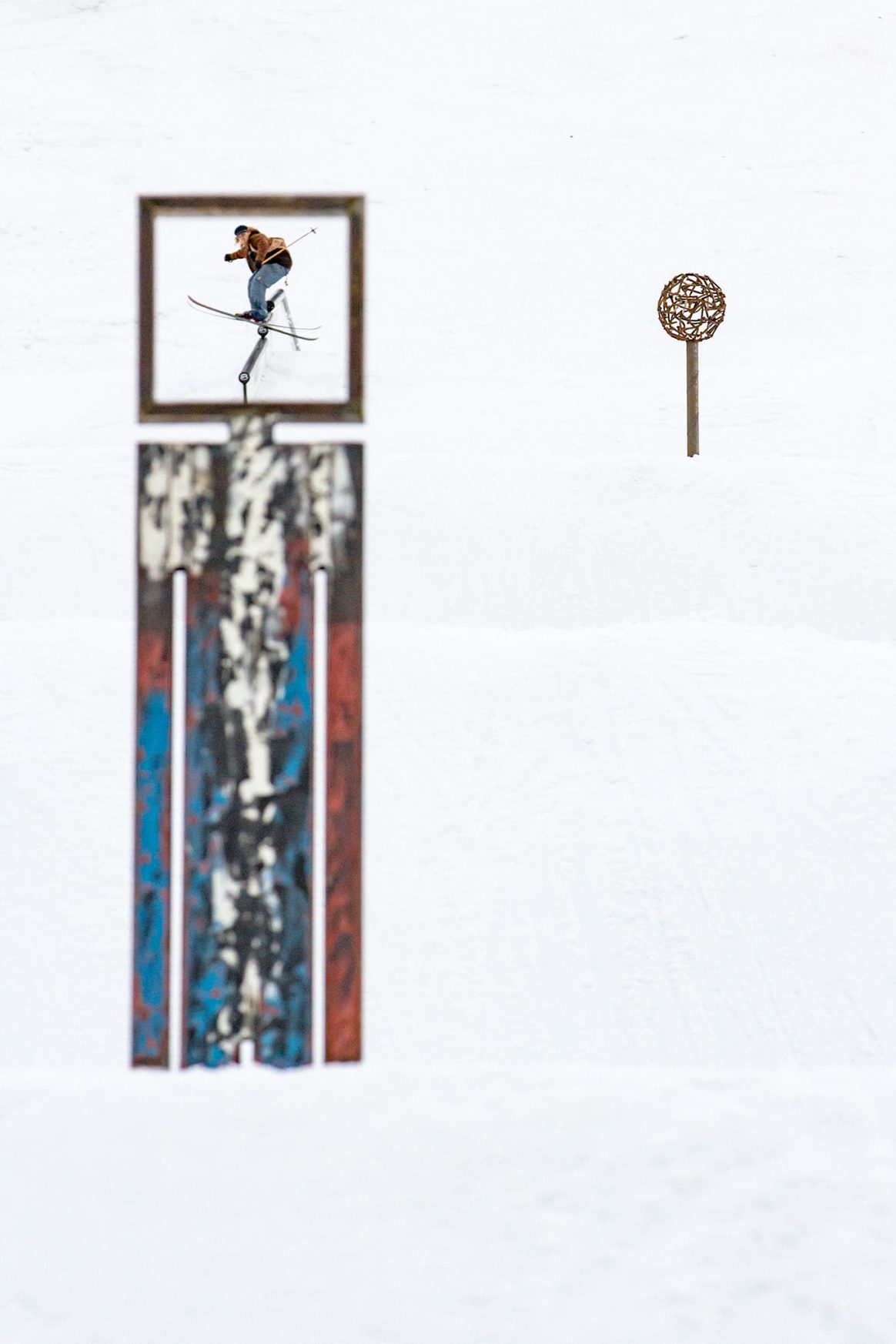 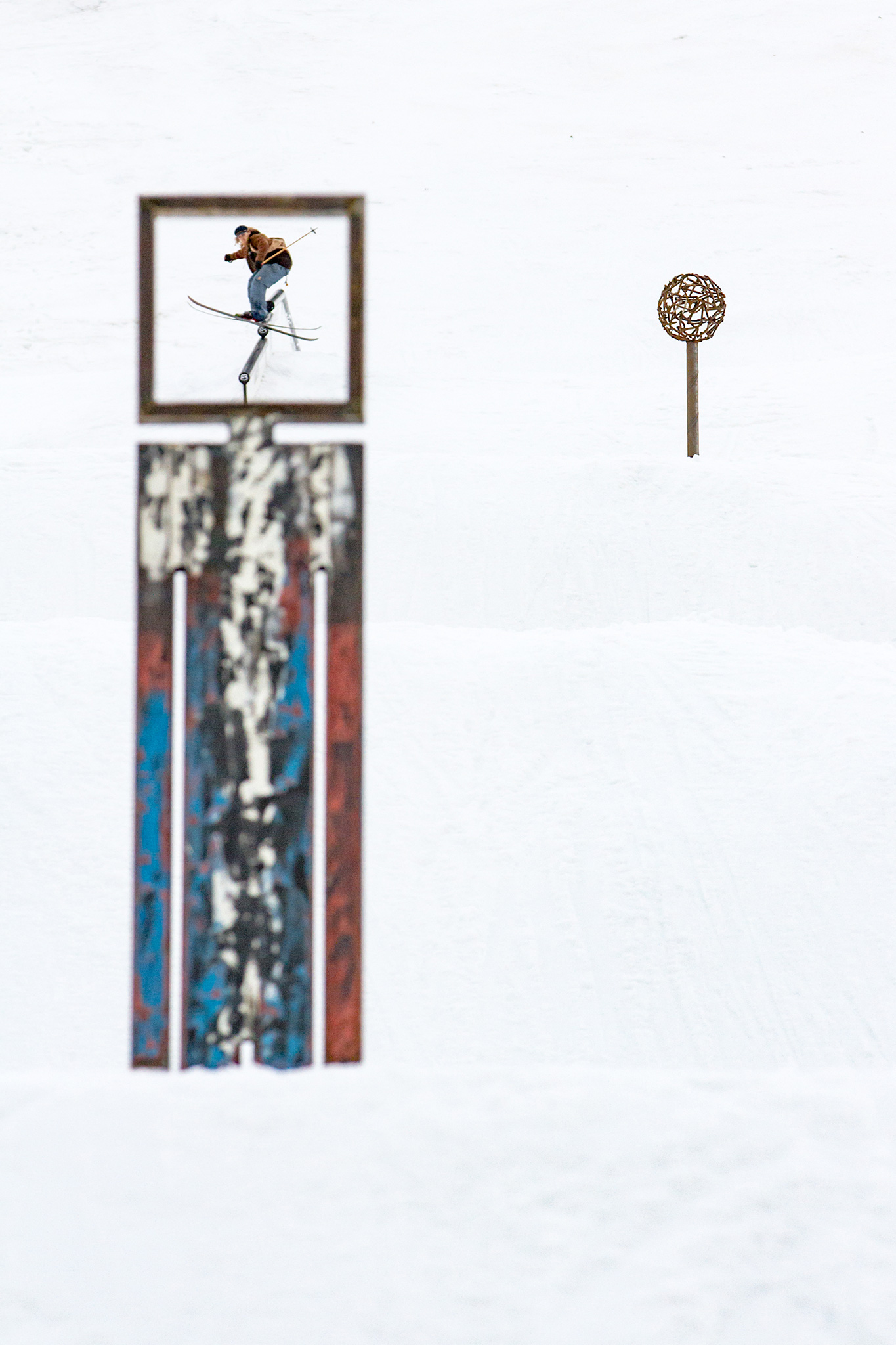 [01:16] Tell me about the peace sign, how did you make that one?
It’s made from old skateboards. I started working on it at around 4:00AM one night. I got the idea and started cutting skateboards apart and screwing them together. I was working a few different things at the same time.

Do you often work like that? Getting a burst of creativity and making a lot of things all at once?
Yeah, sometimes you have so much creativity, and you just want to use it and stay awake. You can stay up and sleep later. It’s better if you’ve got a good flow. The time doesn’t matter. The flow and the feeling do. 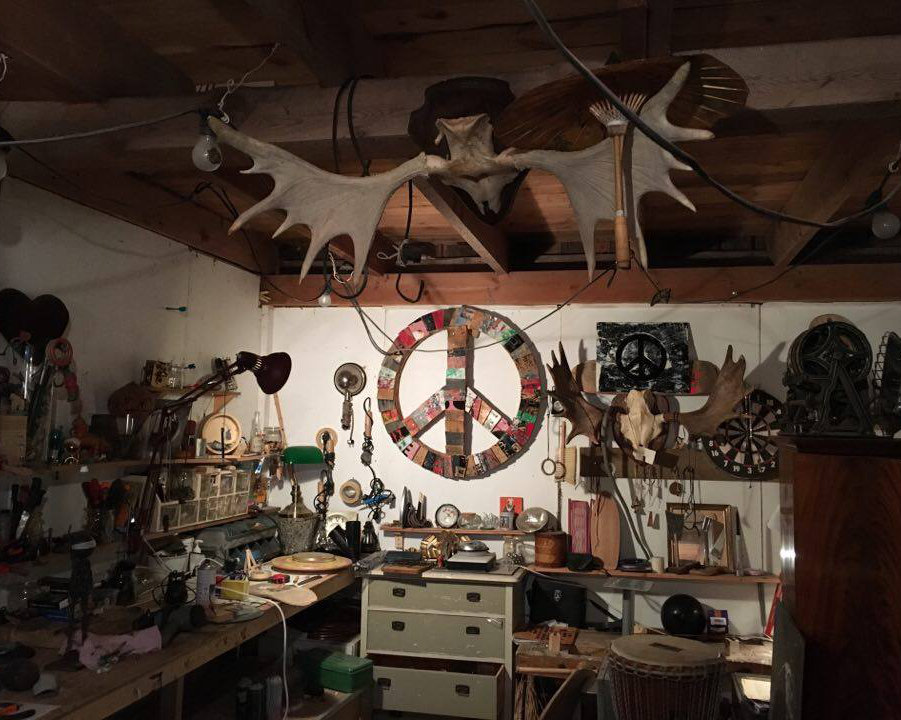 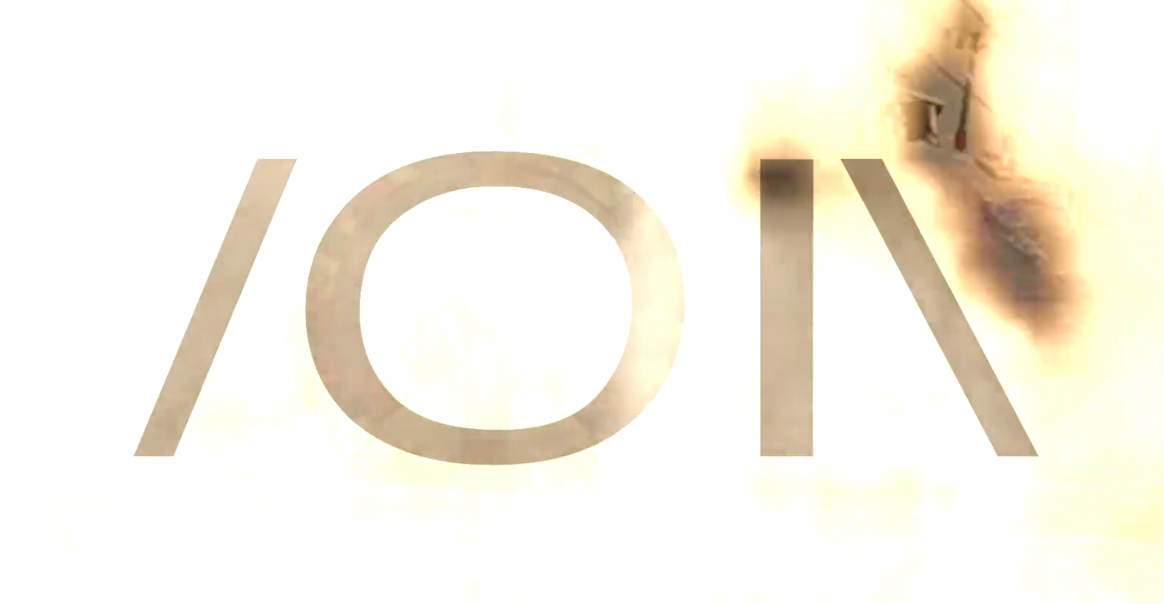 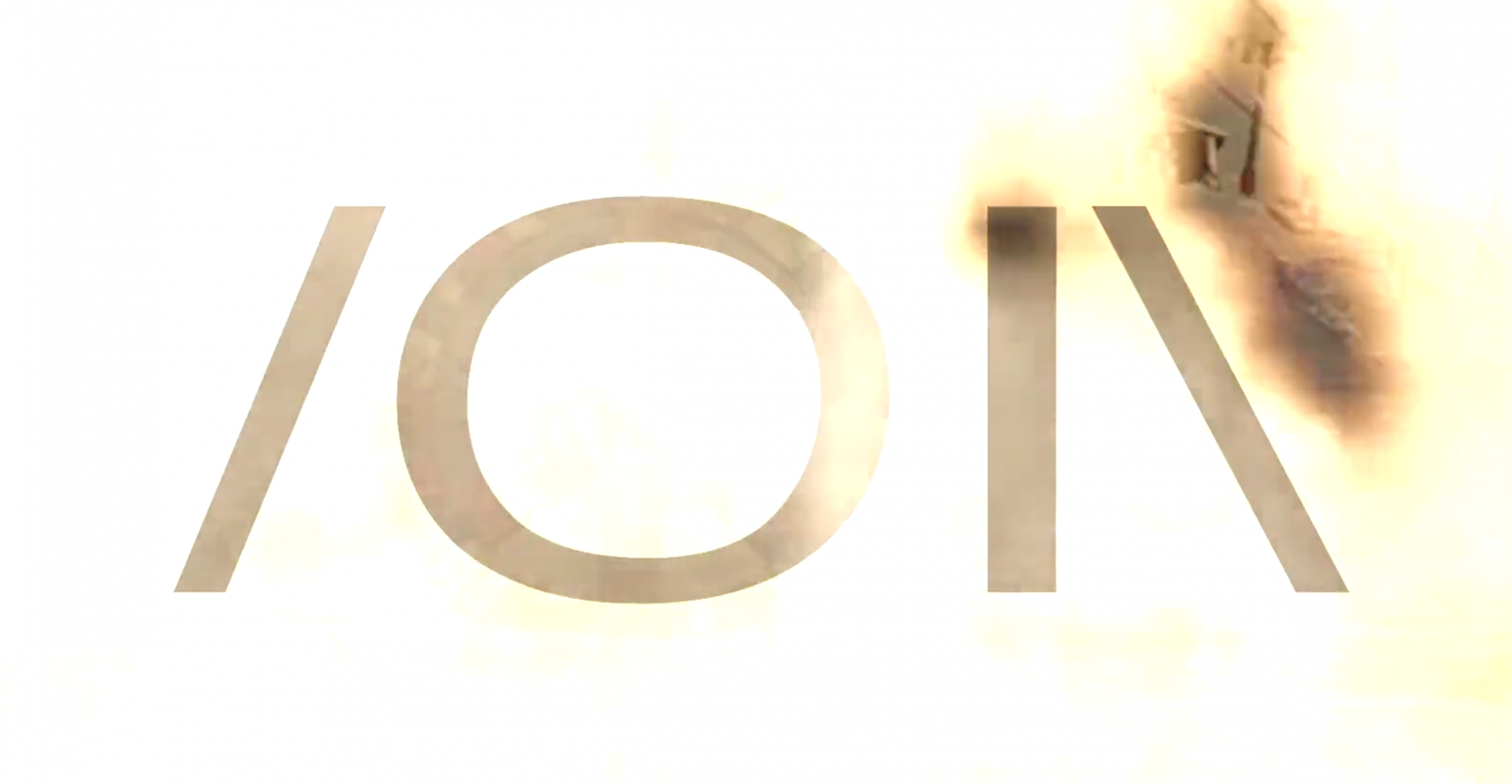 [01:20] This is kind of your logo, right? What is it?
I don’t remember when I did it the first time, but I wrote this on my door in my workshop. If you put it together, it’s the peace sign, written out on a keyboard.

A lot of your art has peaceful messages. Are you a peaceful man?
I think so. I hope so. Yeah. Sometimes maybe there are angry messages too, like with the guns. Stupid. I think probably everyone can agree with that. 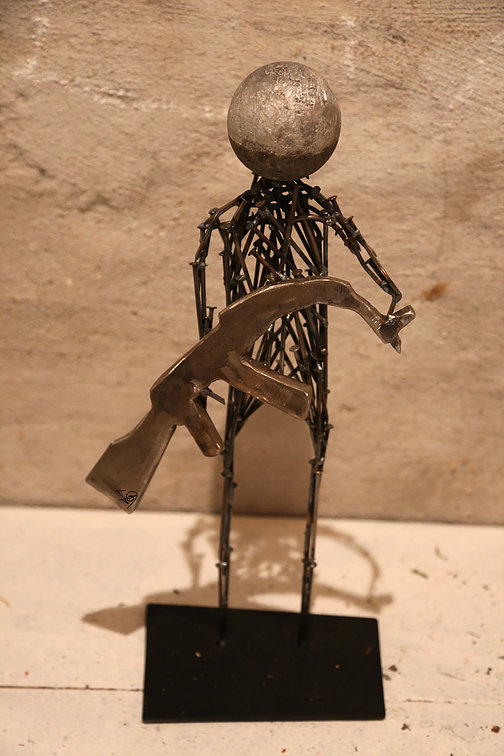 When did you start doing art?
I was going to Vig, the winter sports school in Kiruna, with Lucas (Stål-Madison), Magnus (Granér), Per (Hägglund), Jens (Nilsson), the Bunch guys. I was going for a corner gap and took too much speed. I landed at the bottom of an icy transition and snapped the ACLs in both my knees. It took four months for the doctors to understand what was wrong. At first they said I had only bruised my knees, and that I should relax for a few weeks. I relaxed for a while and my knees started to feel better, so I went skiing again, but it was terrible. It wasn’t working. I waited a bit longer and tried again, and twisted my knee again. Then the doctor told me that my ACLs were gone.

Everything was taking a lot of time, so I needed to figure out something to do to keep me busy. I didn’t know when I could ski again, so I needed a Plan B. At first I started making some skateboards and longboards. Finally my knees were healed, two years later, and I started skiing again. I got in half a season in Åre, and then I tore my meniscus and got more time to waste. I was happy with the boards I’d made, so I started doing other things. I had some old machines and put them in the barn that my dad was renting—a big band saw, a lathe and some table saws. All kinds of different stuff, mostly wood tools. I use a welding machine a lot as well. 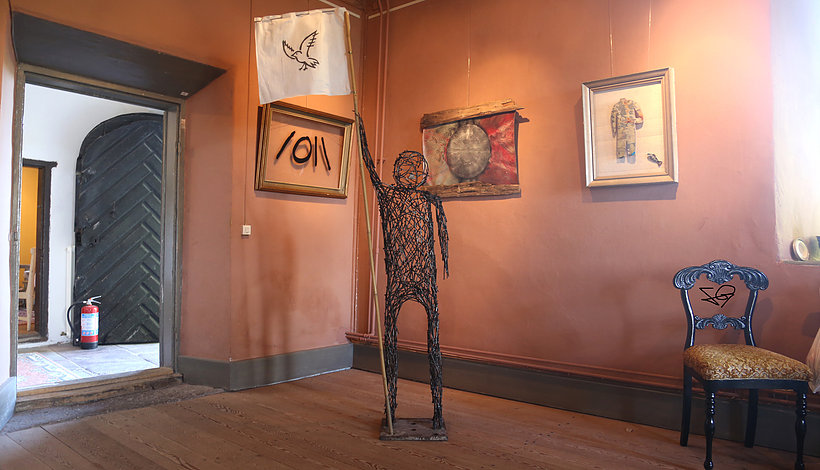 When did you start to think about combining your art with skiing?
I’ve never thought about it before. But when you see a street spot or a kicker in the backcountry, it looks like artwork. So I think that’s probably the seed for what I’m doing now. I’ve got lots of drawings for kickers and things I’d like to build.

[03:04] Tell me about this segment.
This is a section from Poland from last season.

How was skiing in Poland?
Like you would think about Poland. Gray, rainy. Gray colors, gray houses. old houses. No, it was good. It was a nice experience. It was the end of the season and the weather was getting better every day.

[04:04] Is this your workshop?
No, its my dad’s place. I have too much wood dust in my workshop. I do melt metal and do blacksmithing outside of my workshop, but not the welding machine. The fire risk is too great. And I don’t have my own welding machine. It’s my dad’s, he likes old cars.

Did you learn from your dad?
Maybe at the beginning, but now it’s me teaching him. When I was starting to learn welding, at maybe 12 years old or so, he couldn’t do anything. My neighbor got a welding machine and I always borrowed it to try to make a rail for skiing. It was 1.20 meters high, a bit too big for getting started, both for skiing and welding.

[04:10] This guy, his head was stolen. Somebody stole it when I left it outside. He’s on the roller now in the park, on the left side. Last year his head started to roll tip over and look up at the sky.

[04:18] How did your sculptures end up in the park at Kimbosessions?
I don’t know how the collab started. I was there last year and asked Kim if I could make a nice bonk, something more unique than the standard terrain park feature. So I built some stuff to put in the park. I started to make the big guy three days before coming here, as well as the metal sphere out of nails that’s above him now in the park. 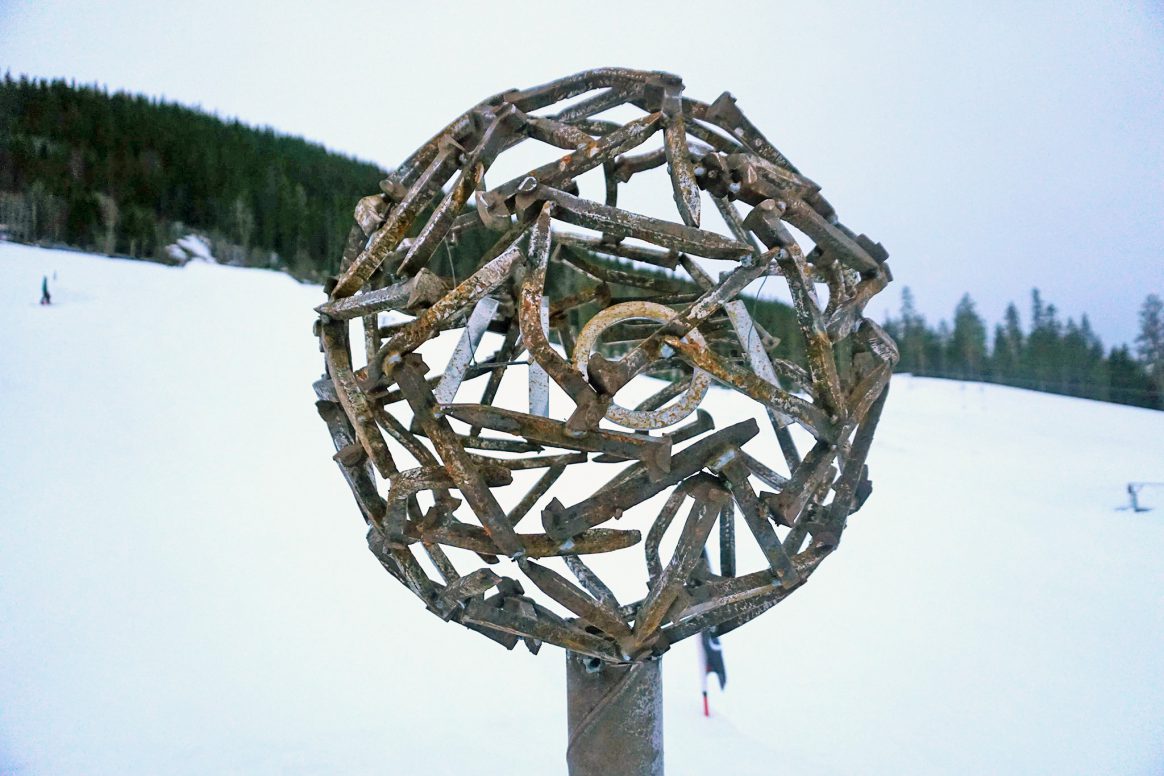 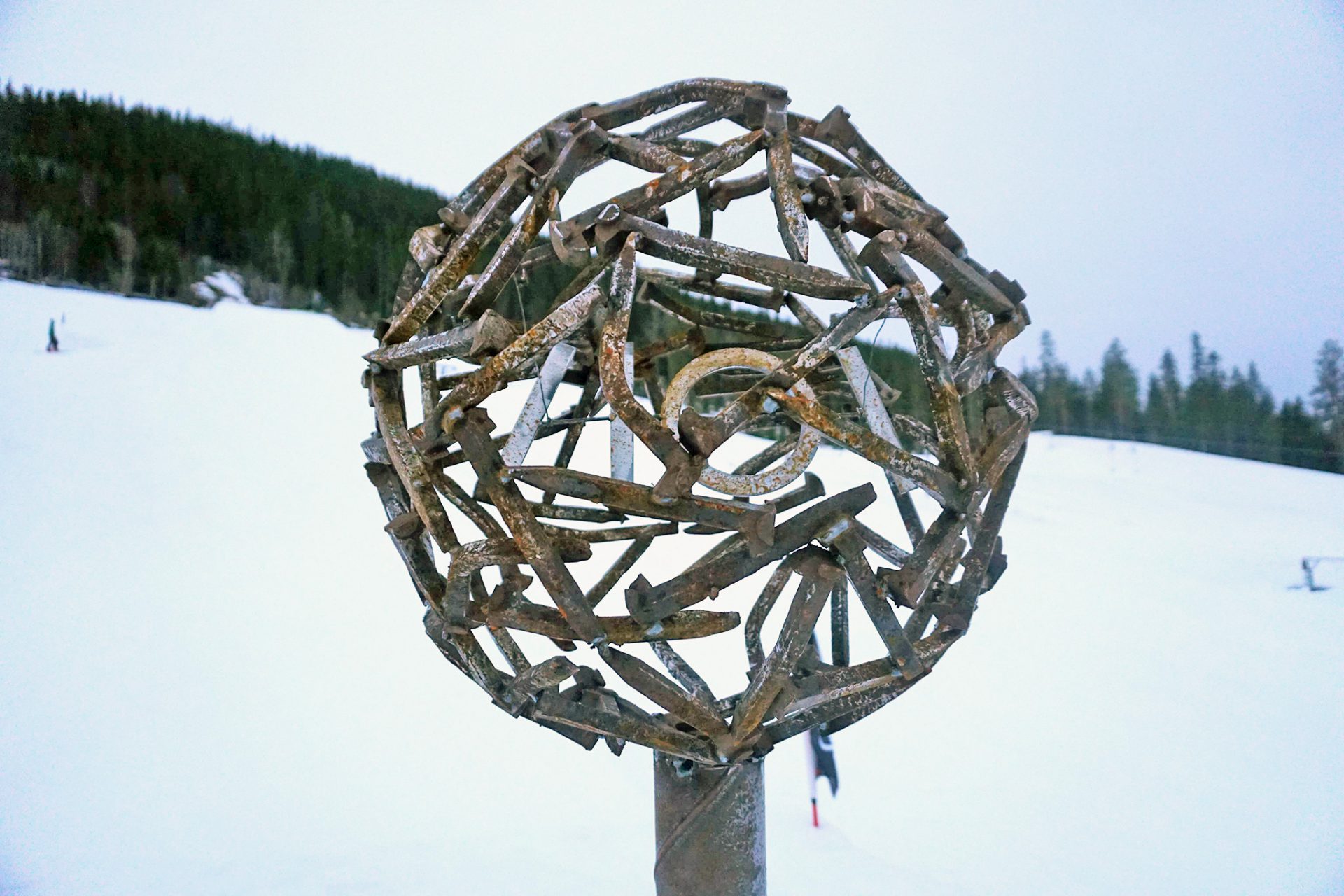 A lot of your sculptures are made by welding nails together. How’d you get that idea?
I found some old nails on the ground in the barn. I was already thinking about recycling stuff, and then I started finding those and picking them up. I ground off all of the old rust and started to put them together. The guy breaking the AK-47 was the first one that I made from nails. It takes a lot of time. Cleaning off all the rust is terrible.

[04:48] I crashed on that trick at last year’s Kimbosessions and had to stop skiing after only two days. I was super angry. And now this I’ve got some problems with my ribs… good times. 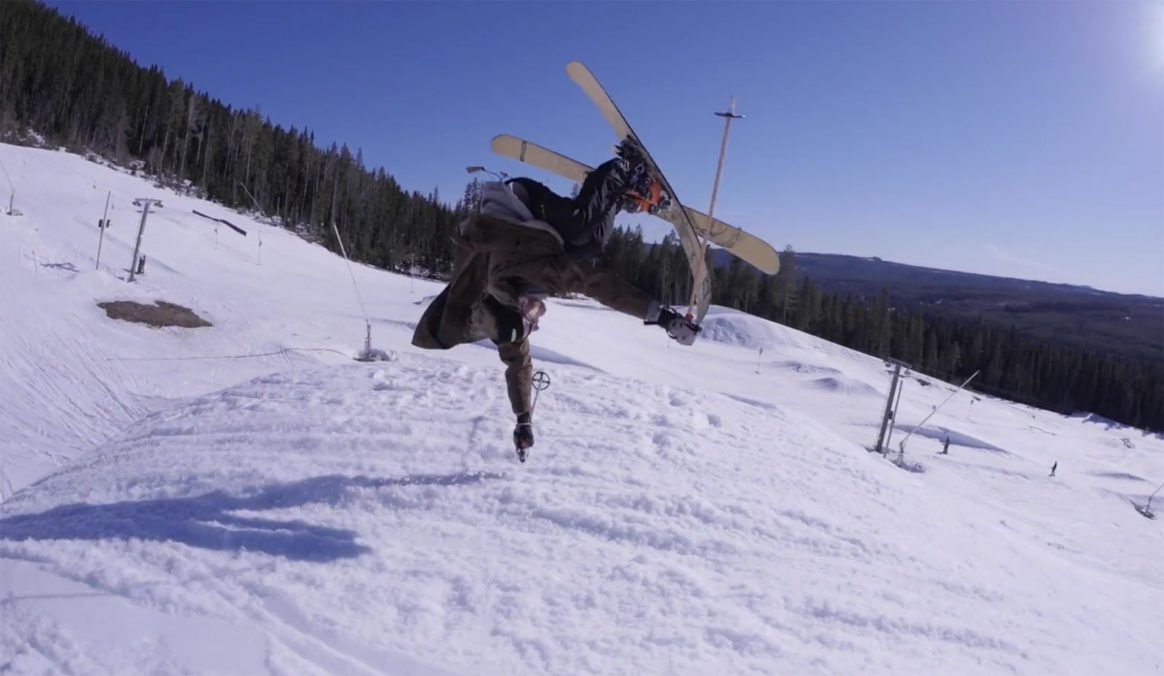 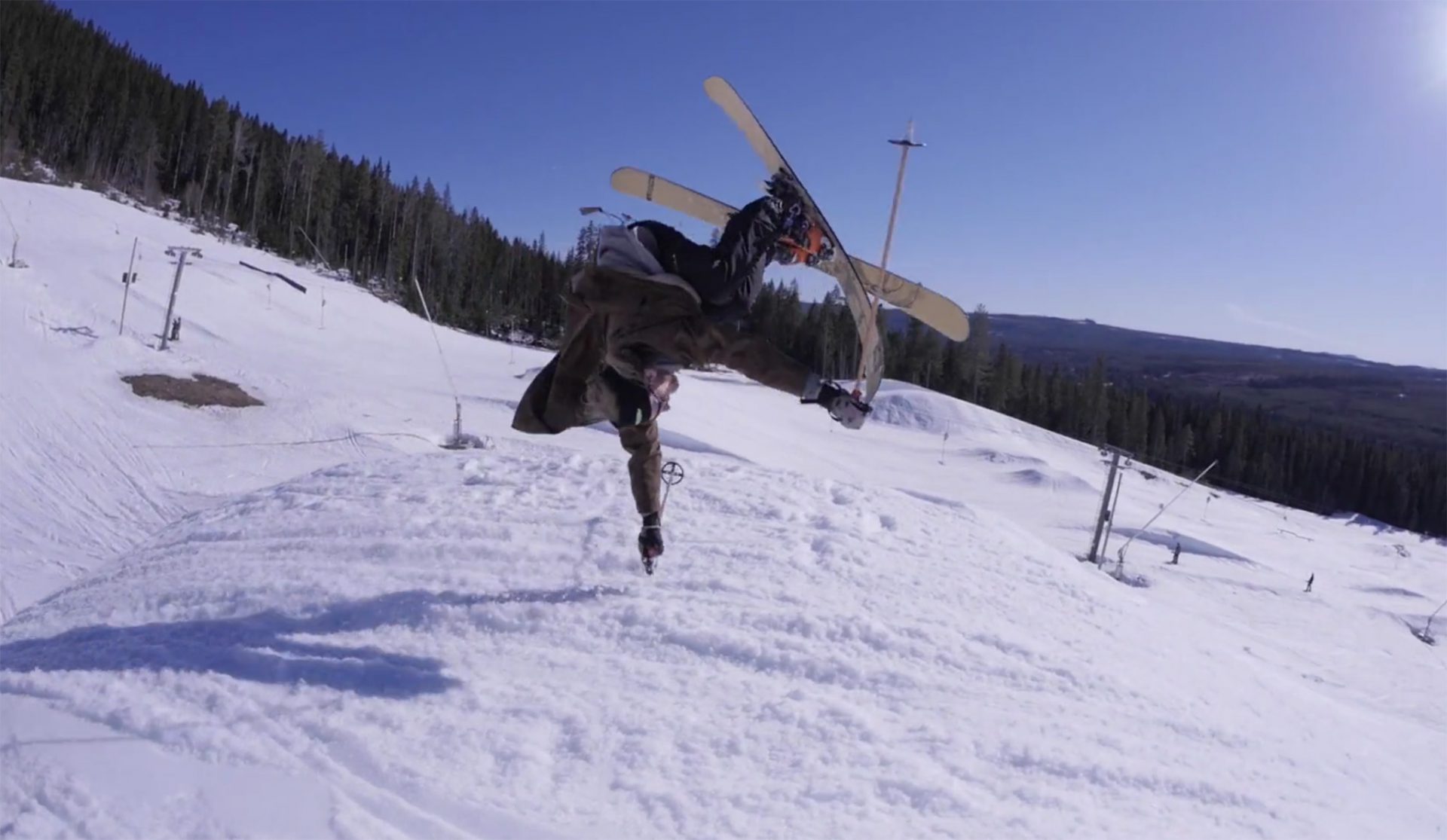 Always right during the best session of the year! how did you hurt your ribs?
A sketchy step rail. I lost my back ski. Super bad bindings, I always have super bad bindings. I landed “taco” on my ribs and lost my breath. Nothing was broken, but the muscles are bruised. I was skiing a few days ago and it was working really good, but I think I tweaked it again bringing all of the sculptures up to the park.

Do you sell any of your art?
If someone wants to buy it. I don’t have a price out on my stuff, but if someone asks me, I’d probably give them a price. I’ve sold a few of the ski paintings that I made earlier, and I’m planning on making some more this year.

Nicky Keefer's B-Roll is not a real B-Roll

Nicky Keefer's B-Roll is not a real B-Roll