FWT – Check out the complete roster of the best freeriders on the planet!

FWT – Check out the complete roster of the best freeriders on the planet!

The talented athletes that make up the world’s premier competitive freeride tour are dusting off their equipment to gear up for the SWATCH FREERIDE WORLD TOUR 2016 (FWT).

The talented athletes that make up the world’s premier competitive freeride tour are dusting off their equipment to gear up for the SWATCH FREERIDE WORLD TOUR 2016 (FWT). The defending champions of the FWT will face fierce competition from the top riders in each discipline and region from last winter’s Freeride World Qualifier 2015 (FWQ). The top riders of the FWQ16 will earn one of the few coveted spots on next winter’s FWT and compete alongside FWT champions on legendary venues across the world.

The up-and-coming young talent honing their game against seasoned veterans will give viewers ample reason to tune into the live broadcasts during the FWT16 season. With so many fresh riders coming into the scene through the FWQ events, a new arsenal of tricks and innovative style will be the norm this season. Can the old guard keep up with the new talent and retain their sought-after spots on the FWT?

Without any further ado, let’s take a look at some of the highlights of the incredible athletes on the FWT/FWQ Rider’s List:

MEN SKI
The youth has risen with young American George Rodney of Colorado, USA, defending his FWT throne as overall winner after an incredible debut 2015 season including a miraculous recovery and victory in the snowy spines of Haines, Alaska. Rodney is a fine example of how talent developed on the FWQ can match the skills and experience of veteran riders. Young gun Leo Slemett (FRA) will also be back in the game to show visiting riders how to ski in his hometown of Chamonix, France. Slemett will challenge experienced riders like Reine Barkered (SWE) who is always a force to be reckoned with countless podiums and a reputation for sending the most technical lines with lightning speed. Barkered is not the only veteran worth watching; two-time FWT champion Drew Tabke (USA), the “Flying Hawaiian,” is still discovering needle-in-haystack lines on classic venues with his patented creativity. However, sometimes pedal-to-the-medal riding is what it takes to win, as demonstrated by Sam Smoothy’s (NZL) line in Vallnord-Arcalis, Andorra last year, which many consider to be one of the the finest runs ever thrown down in the history of the sport.

Never before have we seen such a huge pool of talent on the FWQ ready to send it hard to earn their spot on the FWT. Repeat crusher Ivan Malakhov, one of the strongest riders to ever come out of Russia, is back and hungry to compete on the FWT. Coming in this season as a wildcard is the young Canadian ripper Logan Pehota, son of ski legend Eric Pehota, who is gaining his own reputation for being one of Canada’s strongest backcountry riders. This new wave of backcountry and freestyle riders also includes freestyler Bene Mayr (GER) who will not disappoint with his solid repertoire of huge flips and innovative style. Markus Eder (ITA) will also be innovating with his massive quiver of freestyle tricks that he perfected for the Sochi Olympics slopestyle combined with his incredibly solid big mountain skills featured in headline ski movie segments and his 2013 FWT Courmayeur victory. 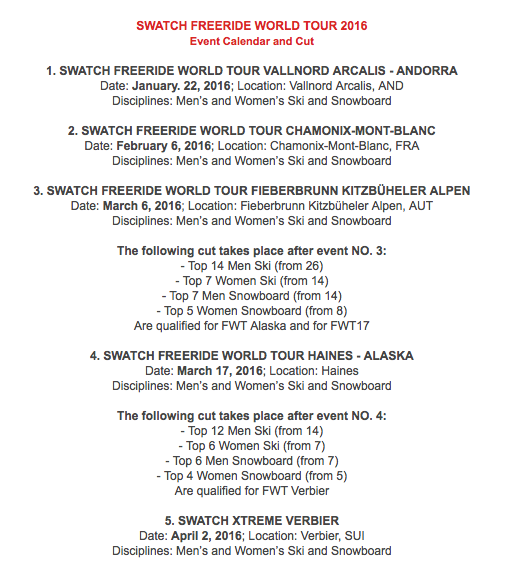 WOMEN SKI
The ladies have definitely been stepping it up harder than ever and 2016 will be no exception. Last year’s overall FWT champion and veteran shredder Eva Walkner (AUT) will be one to watch as she cleans up the big lines better than the boys. Walkner will have to keep it coming with tight competition from 2014 FWQ winner Hazel “The Haze” Birnbaum who wants to bring home domination for the USA. But Italy wants victory badly too, with Silvia Moser sending a huge line last year in Haines, Alaska and hungry to win again in 2016.

After a stunning FWQ in 2015, including two victories placing her on top of the podium in Norway and Austria, Italian skier Arianna Tricomi is representing the Italy’s rising role in producing top-level riders on the FWT. 22-year-old Canadian Lauren Cameron has been upping the ante in the Americas region, but will it be enough to compete against the top- level European riders?

Coming in as wildcard for the 2016 season, Swede and athlete Matilda Rapaport will demonstrate her big mountain prowess that she’s developed over half-dozen podiums including a victory at the Xtreme Verbier 2013. With a solid chance of dominating any given FWT event, Rapaport could easily grab the title with her experienced skill-set.