Skiing gnarly lines and getting online views are both parts of a pro freeskier's job. Fabian Lentsch figured out how to get both done at once.

Charging through some of the world’s technical ski terrain is a large part of a pro freeskier’s job. But getting a lot of attention while doing that charging can be just as important.

Fabian Lentsch, a 22-year-old pro skier from Völs, Austria, figured out a good way of doing both at once when he recently posted a headcam video of a rowdy pillow line on Facebook.

Fabian’s clip has about everything a skier could ask for: amazing terrain, incredible ability — and of course, he posted it in September, right when skiers are getting excited about the coming season. As far as attention-getting is concerned, he hit it just right—Fabian’s 30-second clip went viral, picking up over a million views in just a few days’ time (it’s currently at 1.6 million).

Fabian’s epic line stoked us out as much as anyone, so we decided to get the back story on the talented young Austrian rider and his viral video success. 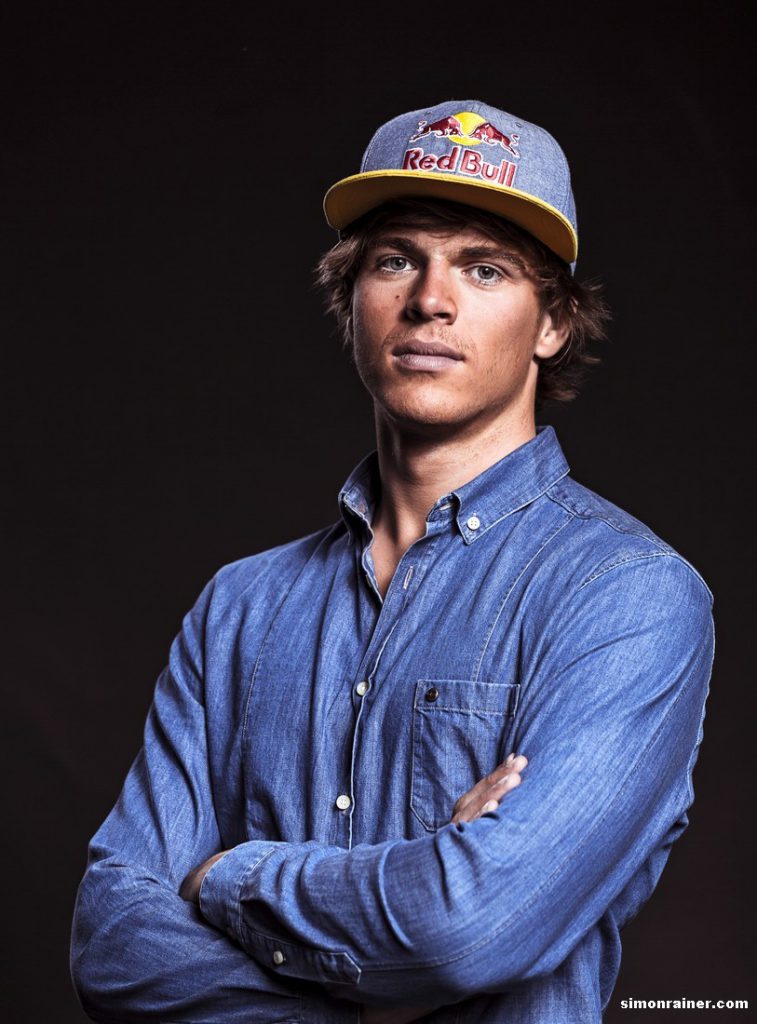 Hi Fabian, I heard you used to ski on the Freeride World Tour?
Earlier I was at a lot of the qualifiers, and sent it pretty hard. Then I was in the World Tour, but got out. I wrote a pretty interesting blog post about it. I wasn’t so happy on the tour – it didn’t meet my expectations, the whole event organization. So I got out, which had been my longterm goal anyway. I’ve always been busy with other projects too – for example, I rode in a mobile home from Innsbruck to Kyrgyzstan, climbing 7000m peaks. I’ve been in Russia, Iran, Georgia, Alaska, Scandinavia… a lot of filming two, the past two years with Legs of Steel, and before that with Whiteroom Productions. So it was always 50/50, contests and filming.

Tell us about your now-famous pillow line.
That was in Canada, near Revelstoke, in March 2013. We were touring a zone and skiing some lines. The conditions were perfect, we really hit it just right.

How was it to ride? Looked like a left turn that you didn’t want to miss.
Yeah, if I hadn’t got that turn, it would have been a real launch into space. I inspected the line thoroughly beforehand, skinned up to the landing and checked that everything looked good and that I’d be able to make it down. Then I had to find it from above. That wasn’t so easy. I rode down through the forest, and the filmer told me roughly, “Left at that tree, then right” so that I could even find my way to the top of the line I wanted to ski. It was really in the jungle. 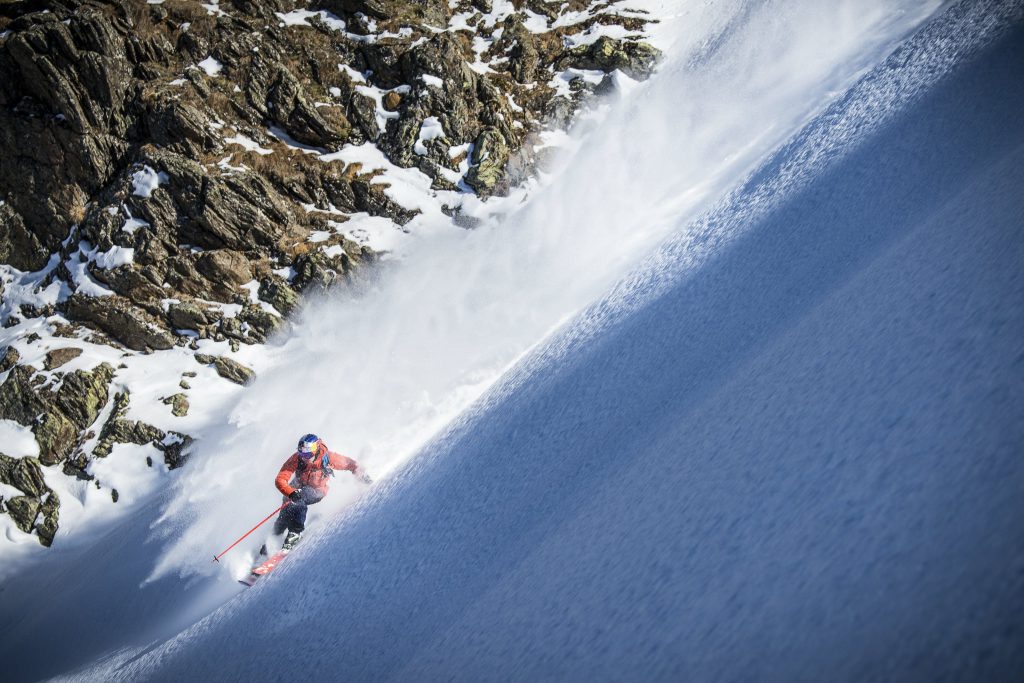 And then skiing the line itself! But you seemed to nail that pretty well.
I talked about it with the other riders beforehand, and they all said, “Well, I hope that works out,” and were skeptical about it. But then I checked it out and saw that it would just work out. And it did, just right.

Did you plan to post that clip, or was it a spontaneous thing?
I was cleaning up a hard drive and re-discovered the clip. Then I thought, since winter is slowly starting, I’ll post it now, since videos usually do pretty well on Facebook. I had enjoyed watching the video again, and I thought I’d share it with others too.

Were you surprised by the reaction?
Yeah, totally. I didn’t plan on anything like that. That everyone would start sharing it like that – I was really surprised. Earlier this year I won the “Line of the Year” award with that line at an event in Kitzbühel. They took the footage straight from our movie with Whiteroom Productions, how it was cut in the movie. So some people had already seen the line, but not from my perspective with the headcam. So I decided to post up the raw headcam shot of the line, too. 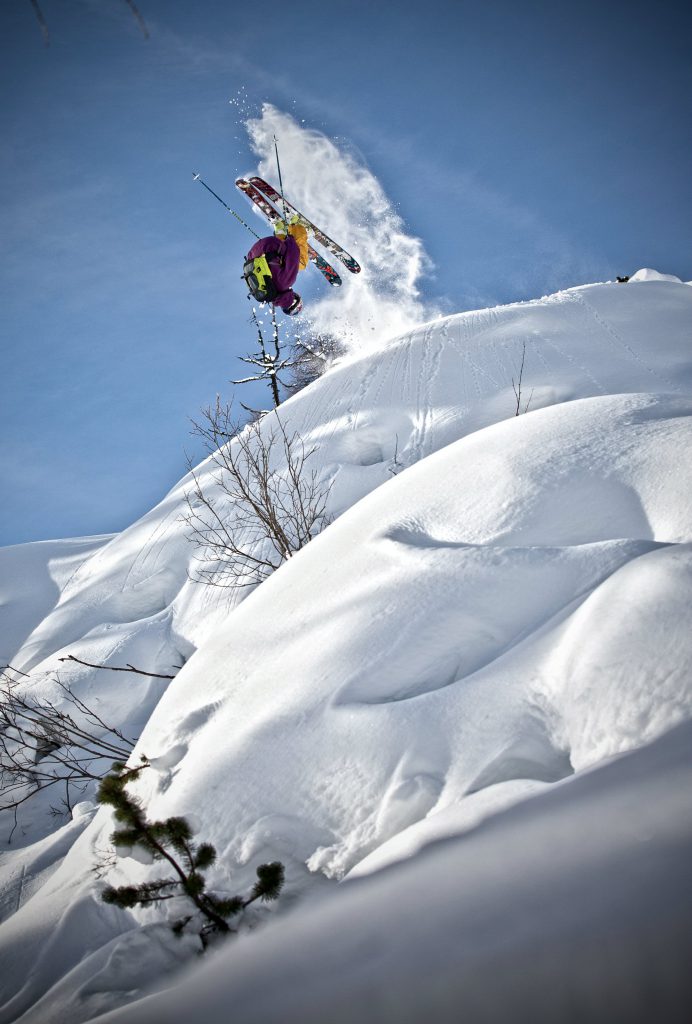 What’s it like to get so much attention at once? Are the sponsors happy?
The sponsors are definitely happy, and a lot of people have written to me. People wanted to know what’s up with my career, how I got this far, and a few filmers were in the mix too. The most significant thing was that my Facebook followers almost doubled: before it was about 6,200, now it’s around 11,500. It was really crazy.

Are you stoked now to film and post more videos like that one?
Well, I’ve got a few more clips like it, but you never know at which point you’re going to start to annoy people with that kind of stuff. You can’t put out something every day, but every once in a while is fine, and it’s a good concept to use the Internet to get attention and to post old videos or the stuff from last year. I’ll definitely be posting a few more.

Watch for Fabian’s debut with the Legs of Steel crew in their new film Passenger.