Ah, the sweet smell of new ski gear! Last month Downdays stormed the labyrinthine halls of the ISPO snowsports exhibition in Munich, Germany in search of next year’s freshest ski gear. Here is what we found in the hardgoods departments of your favorite purveyors of snow sports goods.

There are plenty of new developments from the Völkl/Dalbello/Marker conglomerate. We’ll lead off with what is probably the year’s highlight binding innovation from Marker: the Duke PT. 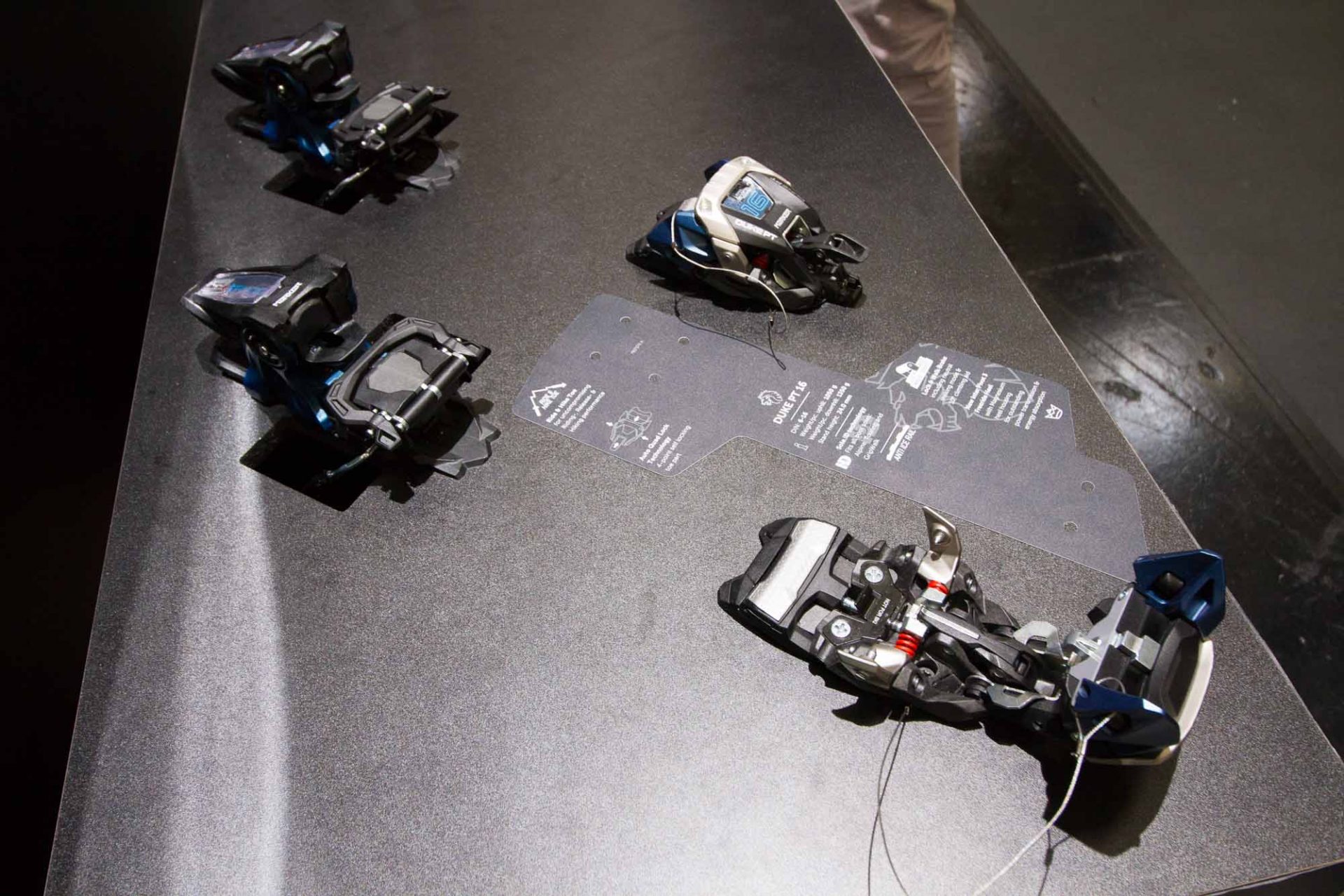 The debut of the Kingpin in 2014 put Marker in the spotlight within the rapidly growing ski-touring category, introducing generation of freeriders to the advantages of pin tech along the way. Even so, people still love the stability and security of alpine-style toepieces on the downhill, which led to developments like the CAST system, the Pindung from Bavarian Alpine Manifest and the Salomon Shift.

The Duke PT is Marker’s answer to the Shift and similar bindings with its own unique solution to the pin vs. alpine problem. Like the Pindung and the Shift, the toepiece of the Duke PT converts between pin and alpine retention: pins for the uphill, alpine for the downhill. 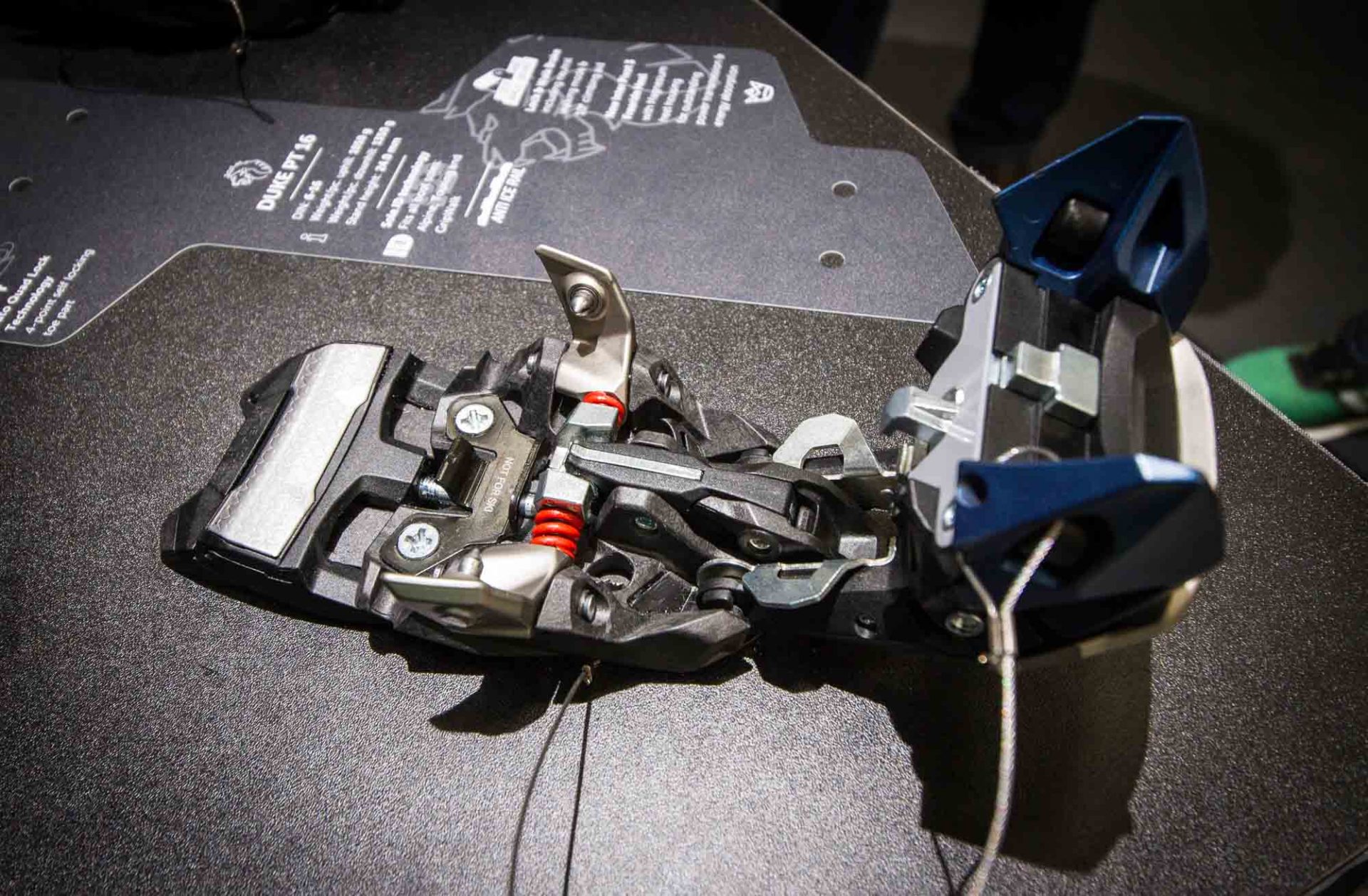 While the Pindung and the Shift accomplish this transformation with lever systems, the Duke PT offers a new approach with an alpine-style toepiece that actually pops off of the ski to reveal a pin toepiece underneath. The removable top half of the toepiece can be stored in your bag for the hike up, reducing weight underfoot, or can be hinged forward, remaining on the ski for shorter hikes. On the downhill, the top half of the toepiece locks into place with a four-point system, keeping your boot in the binding and your binding on the ski for an alpine-secured, DIN-controlled descent.

With the Duke PT, Marker shows that they’re keeping pace with the rapid developments in hybrid touring-binding tech with their own offer for would-be pin converts who still want to shred on alpine-style bindings. The Duke PT comes in two models, the 16 ( DIN range 6-16) and the 12 (DIN range 4-12).

Moving on to Völkl, the Built Together project, a four-year remake of the company’s freeski line, has delivered its second ski with the Revolt 104. Conceived as the little brother to Völkl’s new freestyle-powder flagship Revolt 121 ski, the 104 model incorporates many of the same design features (three-radius sidecut, generous tip and tail rocker) into a platform built to be an everyday, all-terrain freestyle charger. 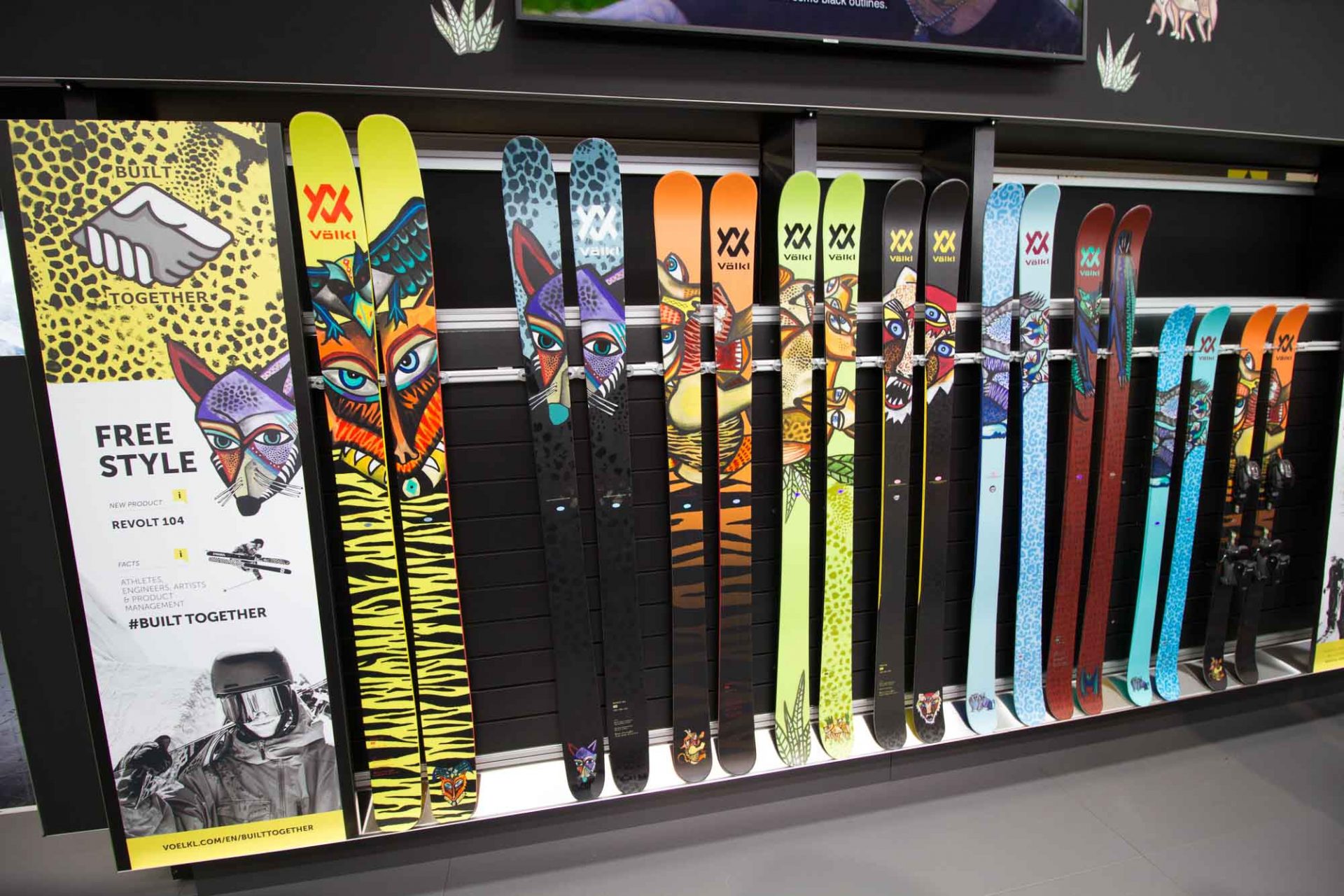 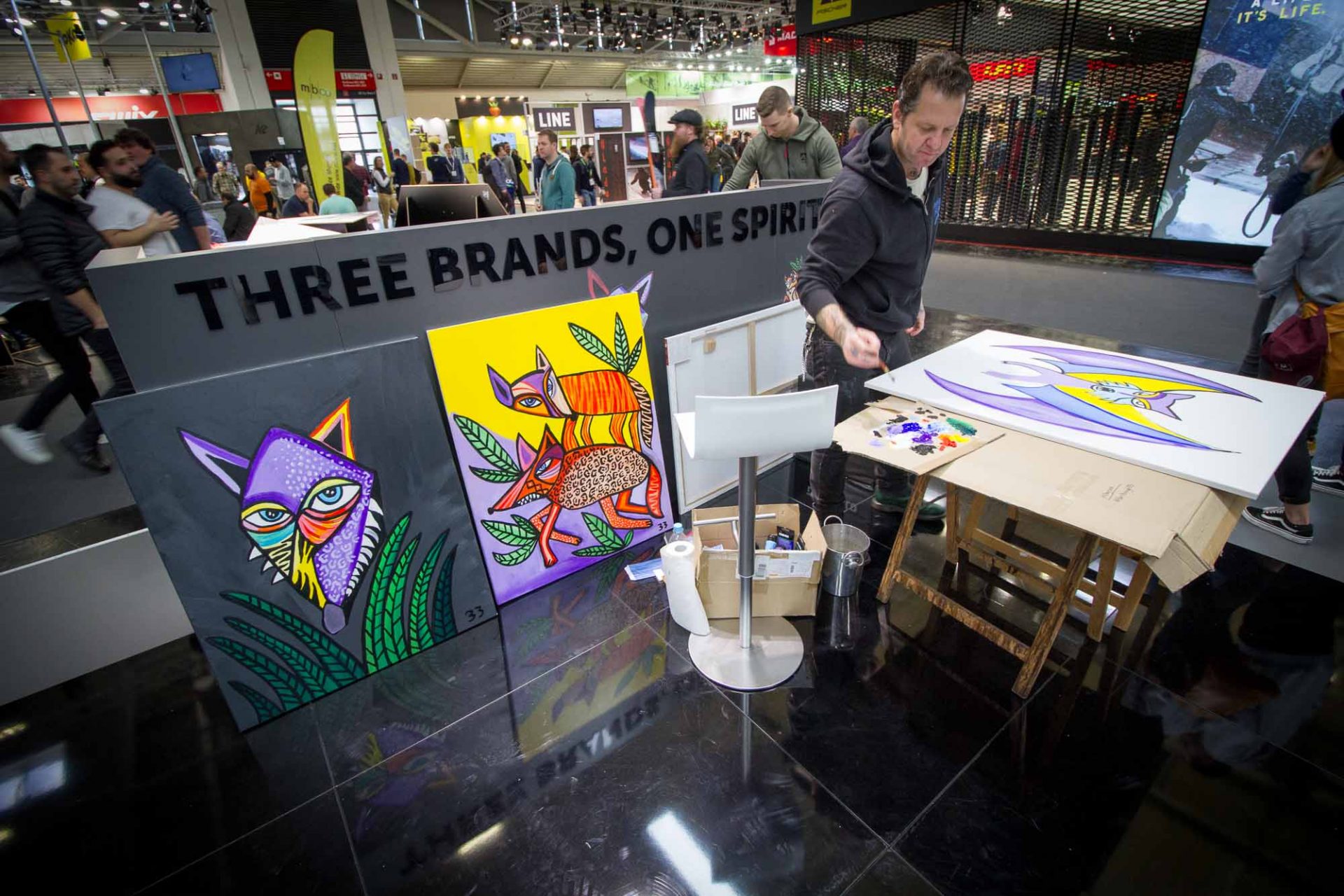 Völkl brought artist Ben Brough to ISPO, where he showed off the bold animal motifs decorating next year's freeski collection.

Völkl also has a new freeride range called Blaze. With men’s and women’s models at 106mm and 94mm underfoot, this lightweight, directional collection takes some hints from the Built Together skis on sidecut and rocker to create a versatile, high-performance freeride platform. 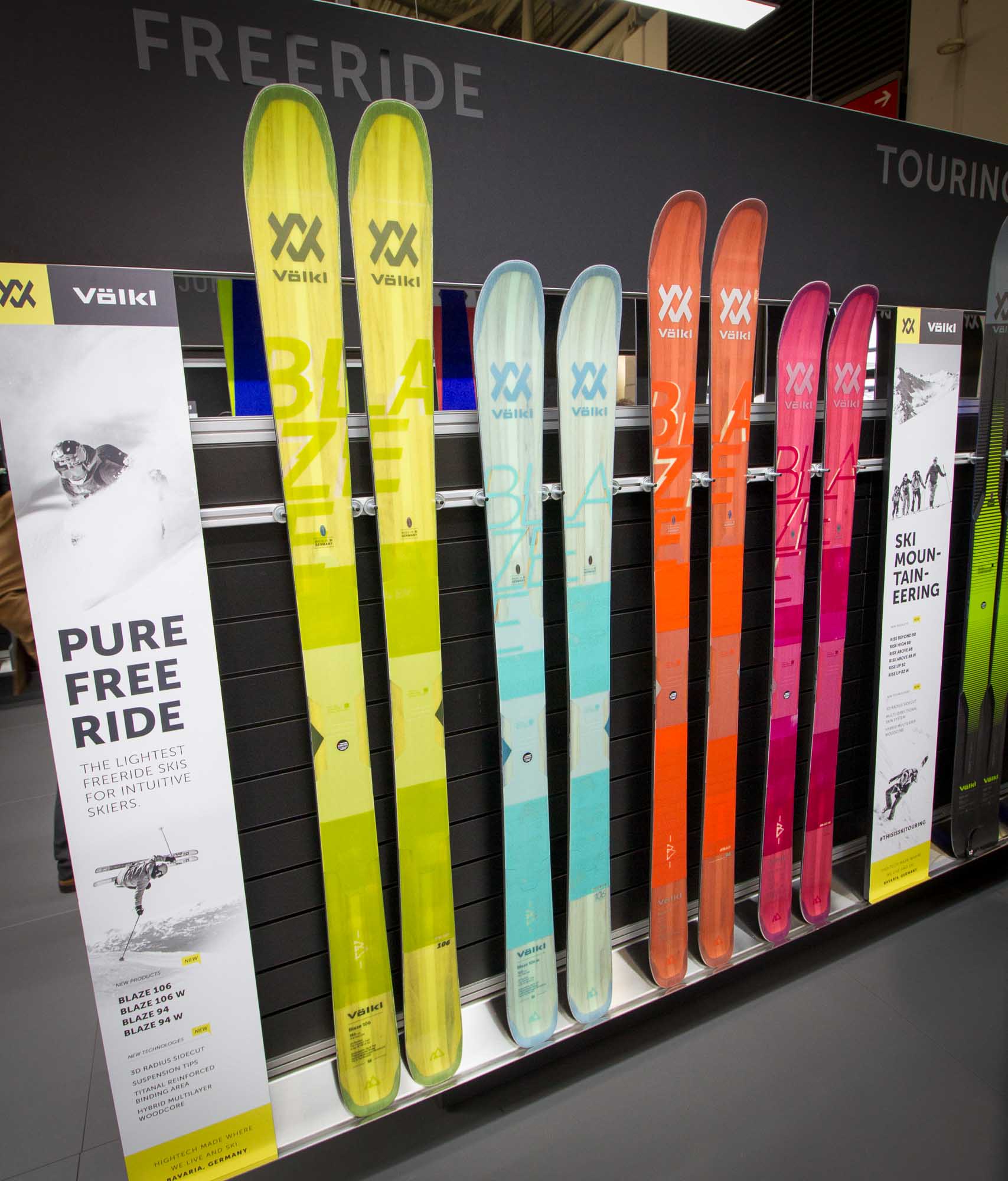 Moving on to the boot department, Dalbello has debuted a new touring boot, the Quantum. Weighing in with three models at 950g (Quantum Asolo Factory), 1060g (Quantum Asolo) and 1150 grams (Quantum), the the Quantum boots feature some creative cinching features, like an old-fashioned rope at the cuffs and a more modern BOA-style quick lacing system on the instep. These trappings adorn a bonded shell made of two half-pieces,made of ultra-stiff polyamid reinforced with carbon fiber, bonded together. 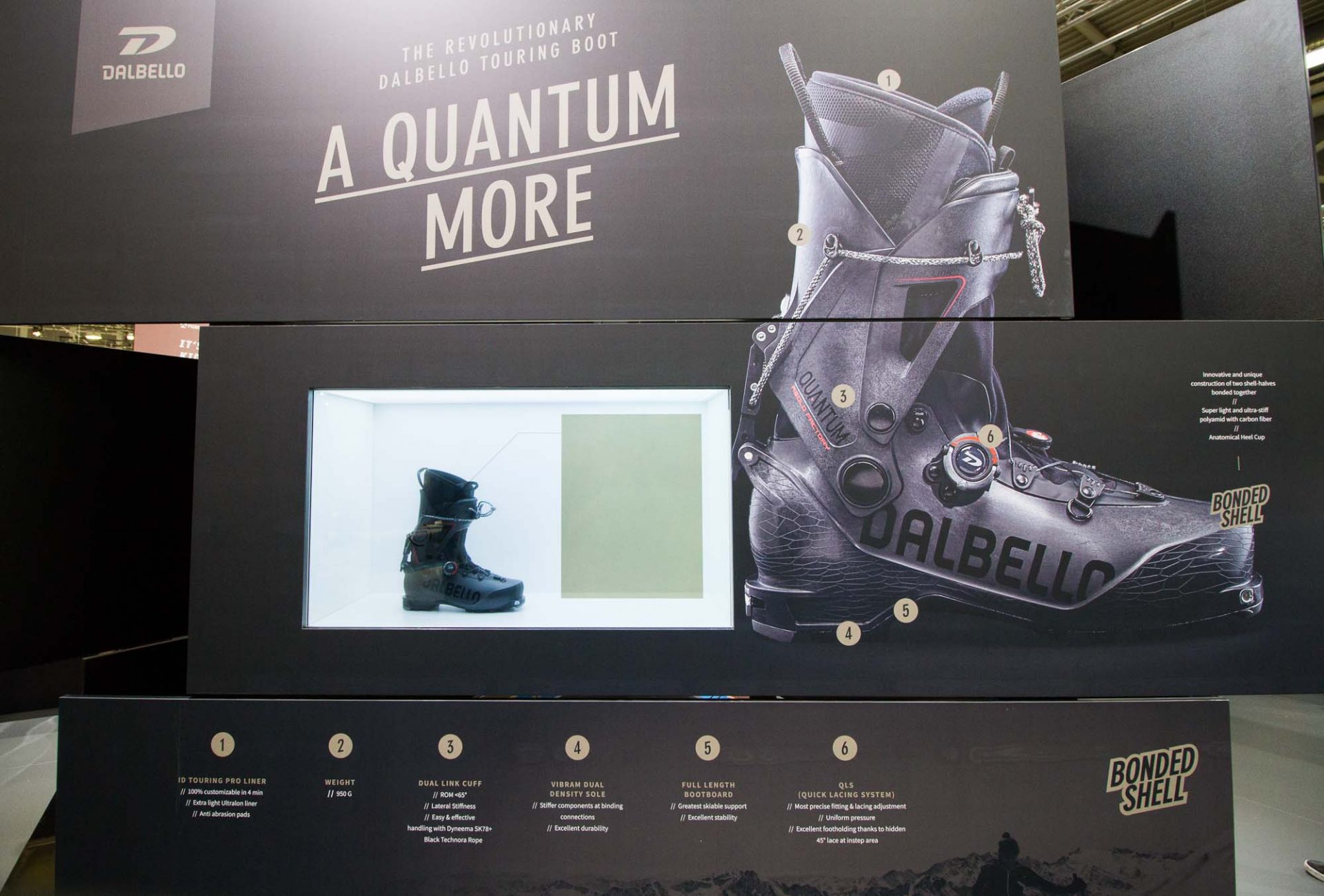 Over at Line Skis, the new Blade and Blade W took center stage. Line isn’t alone among core ski companies marketing mostly directional piste-oriented skis this year, but their take on a carving ski might be the most drastic: a titanal-reinforced, sidecut-heavy piste shredder that promises to reignite your love of the turn. 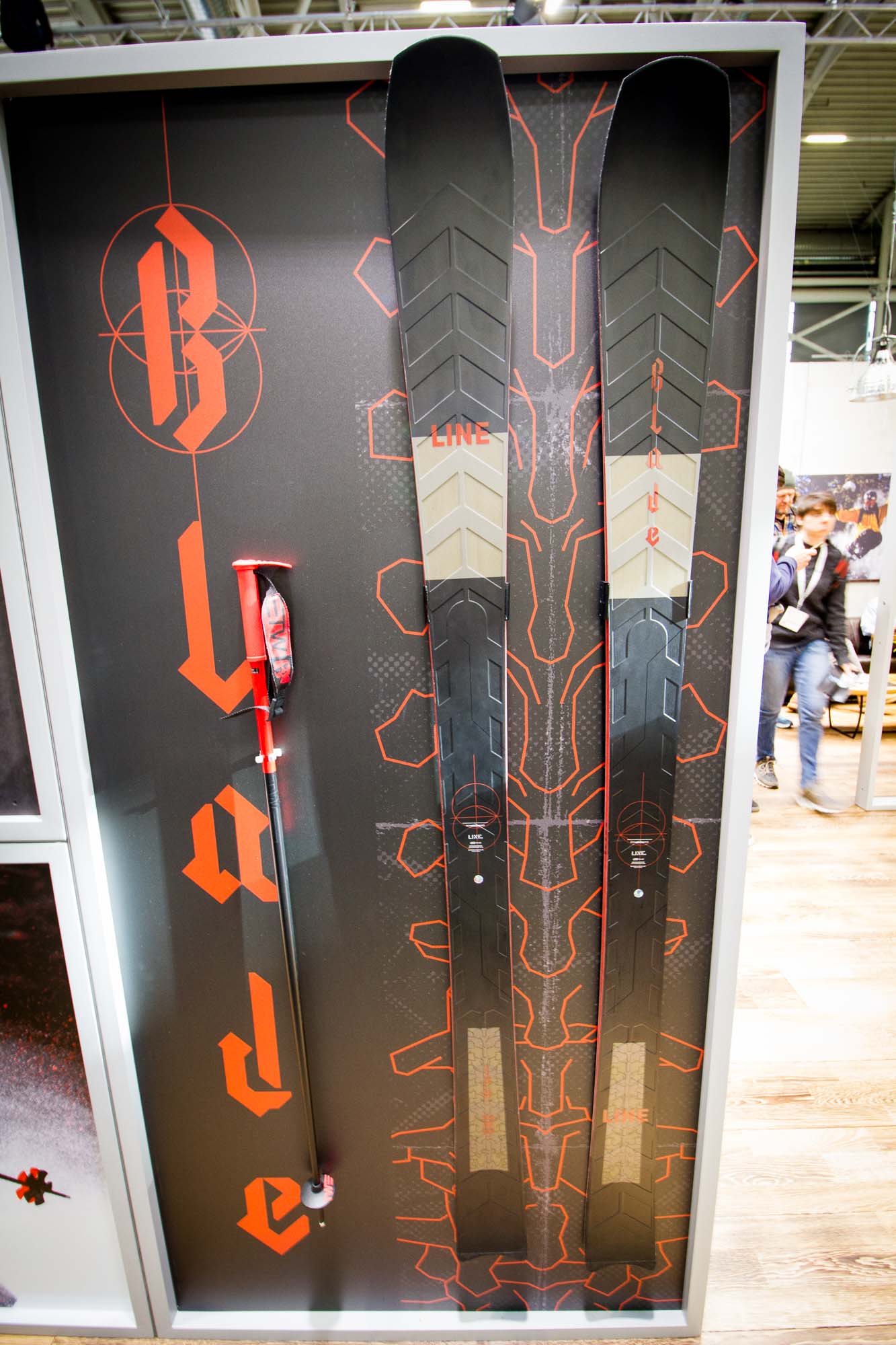 Line's Blade features three separate sections of titanal overlay in the tips, tails and underfoot, promising to be a turn-railing monster.

In other news from Line, the celebrated Pandora women’s powder ski is back with a new 110mm underfoot model, while the Vision freeride collection expands with a 118mm underfoot model. On the freestyle side of things, the Blend and the Tom Wallisch pro model have both undergone redesigns. 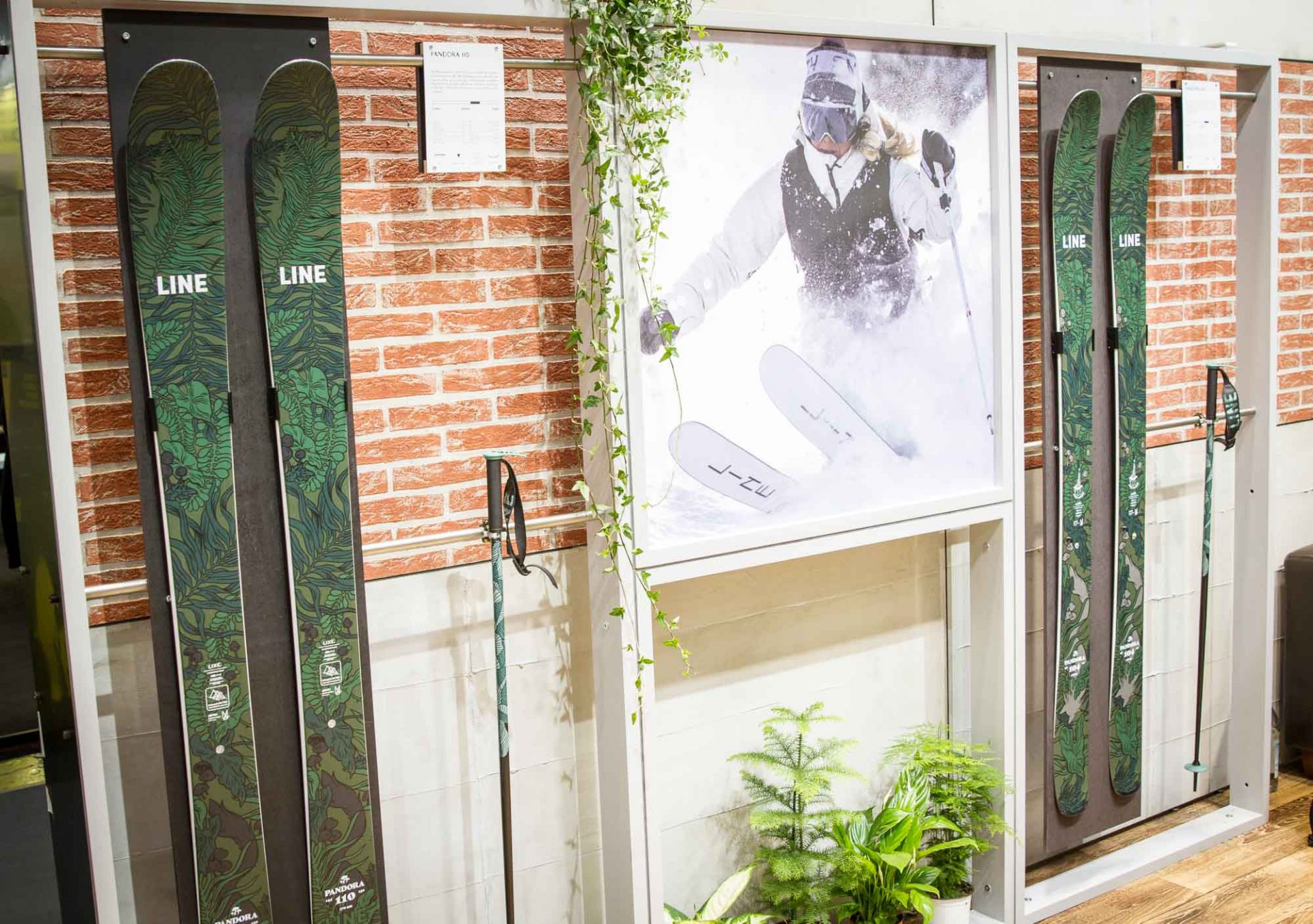 The Pandora, now with a 110mm underfoot model. 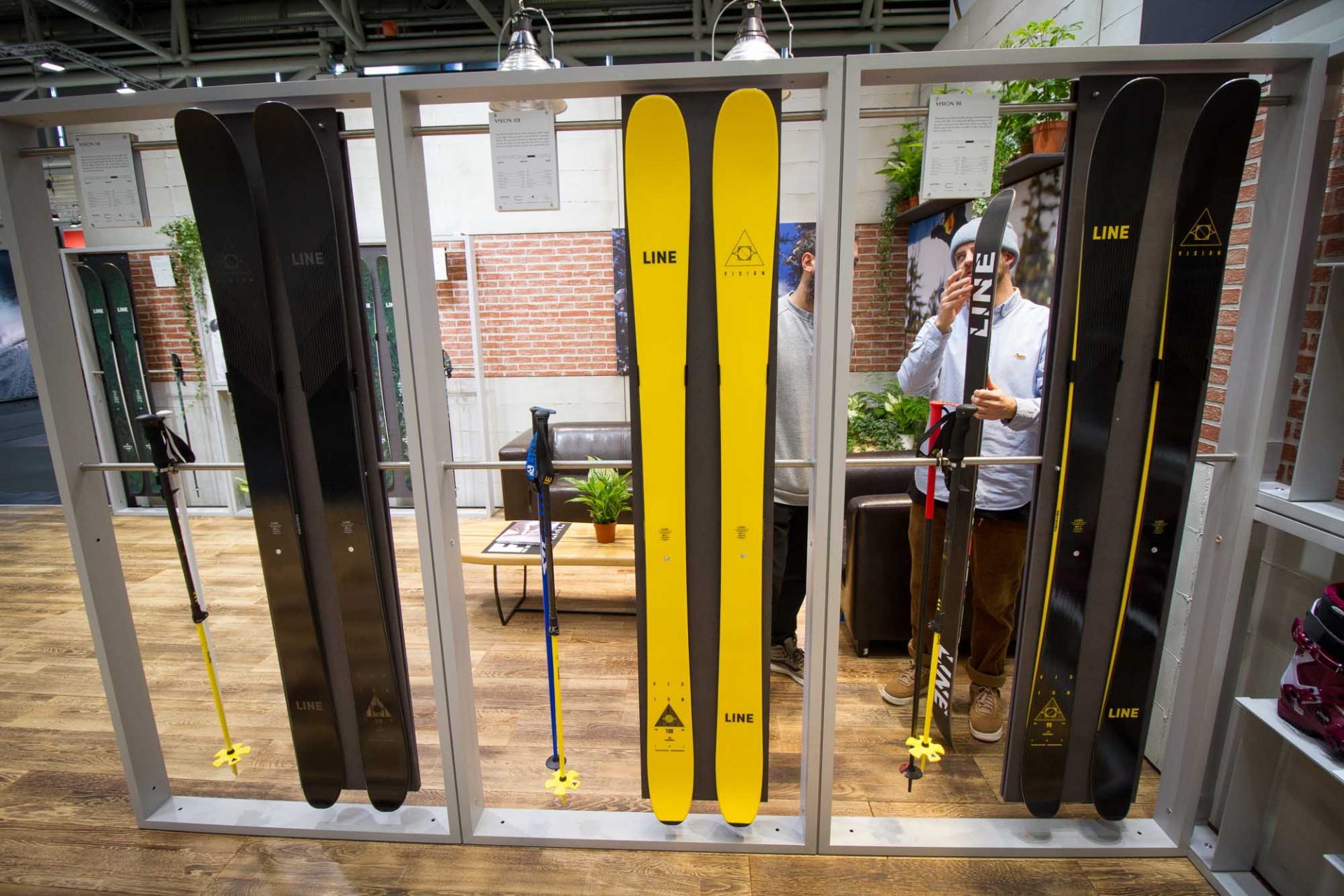 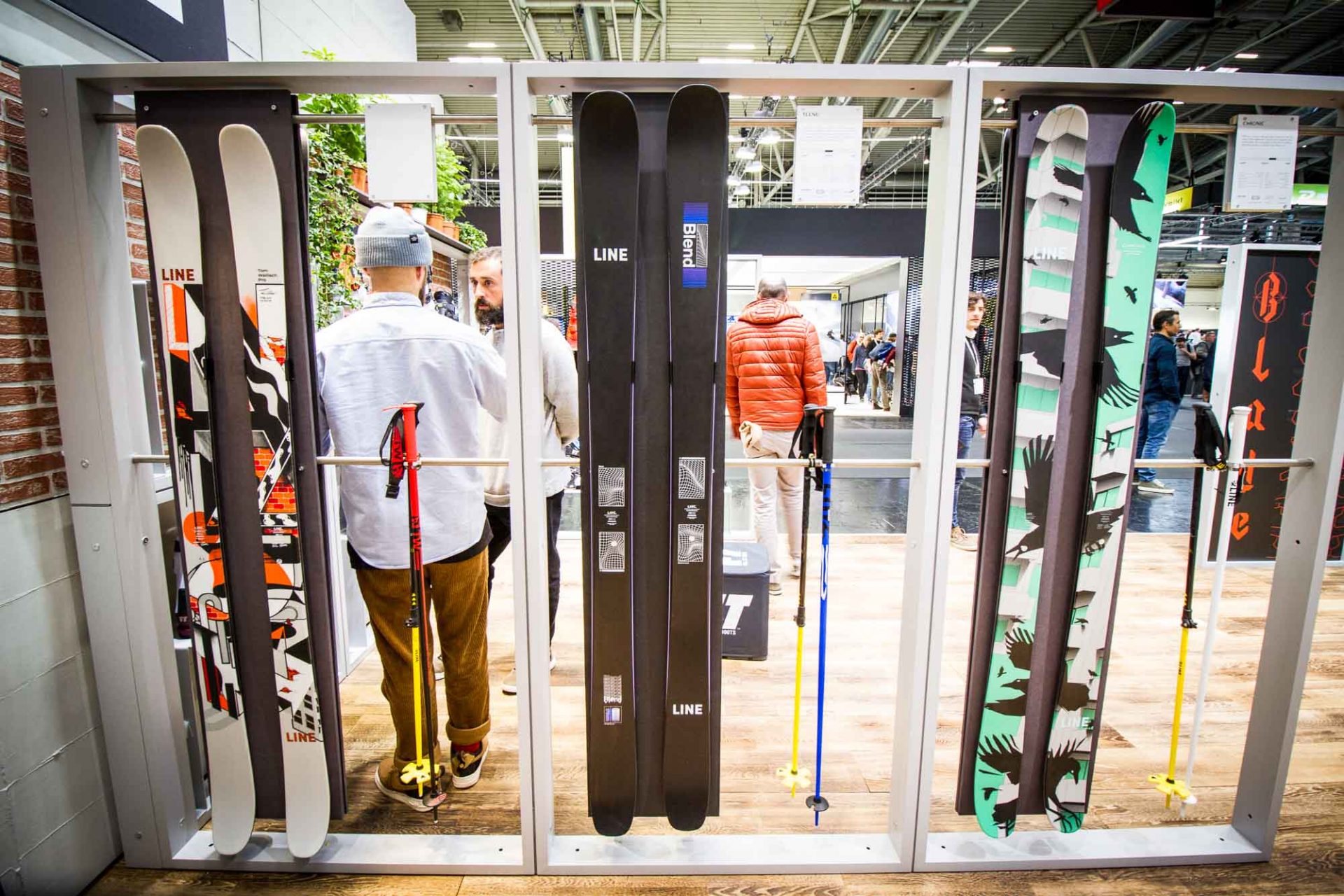 The Tom Wallisch Pro, redesigned Blend and the Chronic. 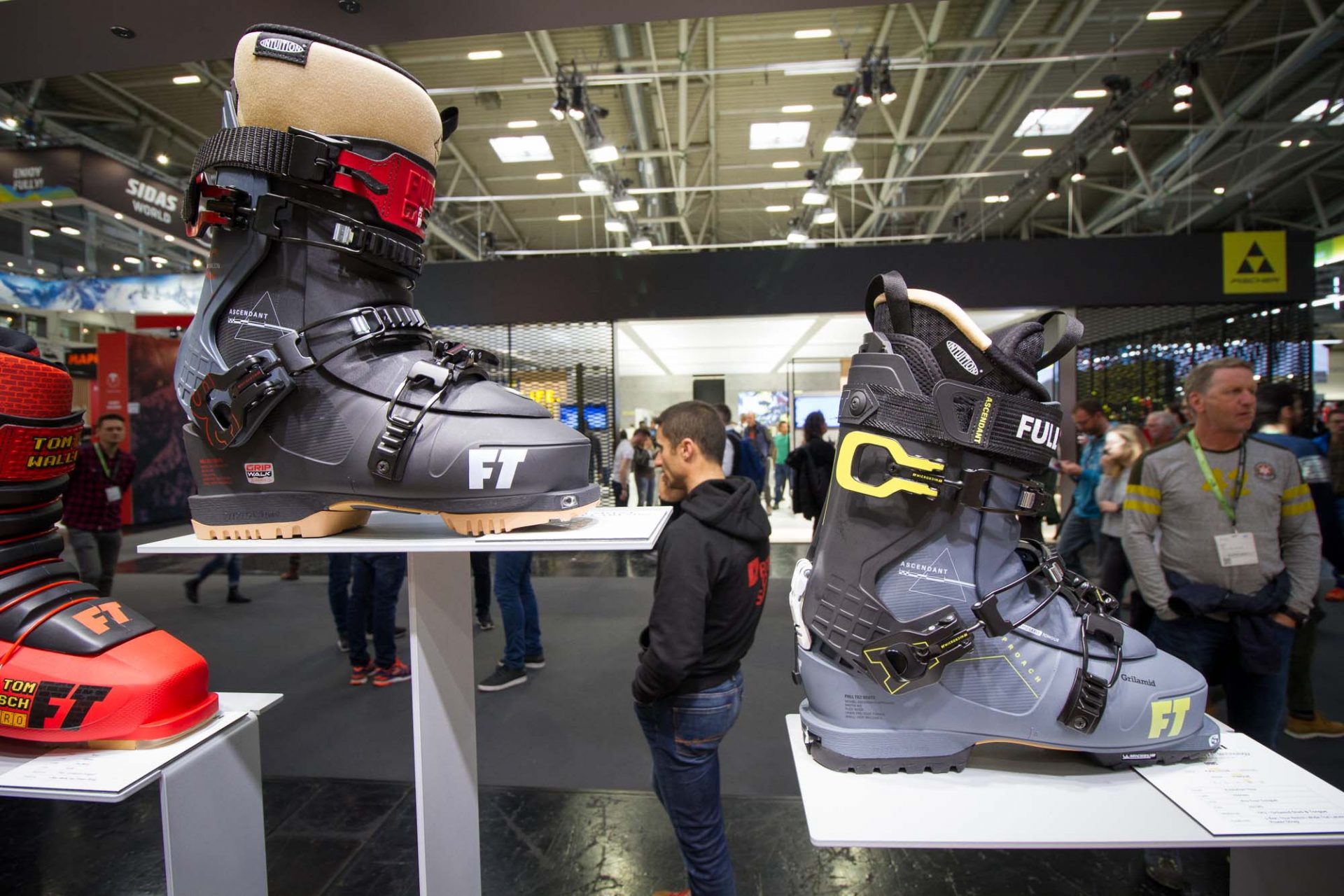 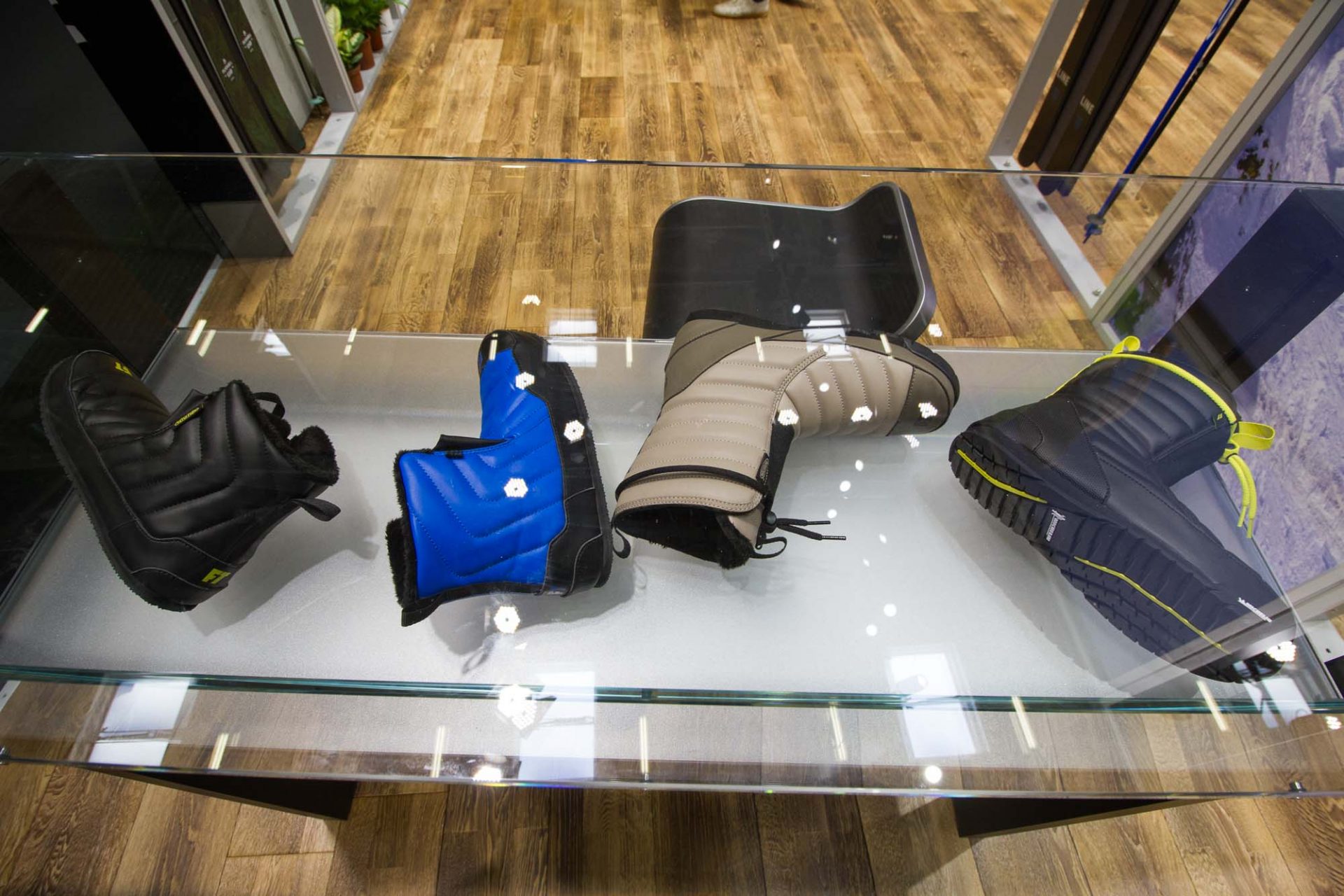 Scott has a new touring boot called the Freeguide Carbon, which sports a two-piece carbon-reinforced Grilamid shell, two buckles with a combination strap/buckle on top, and a BOA system on the liner. 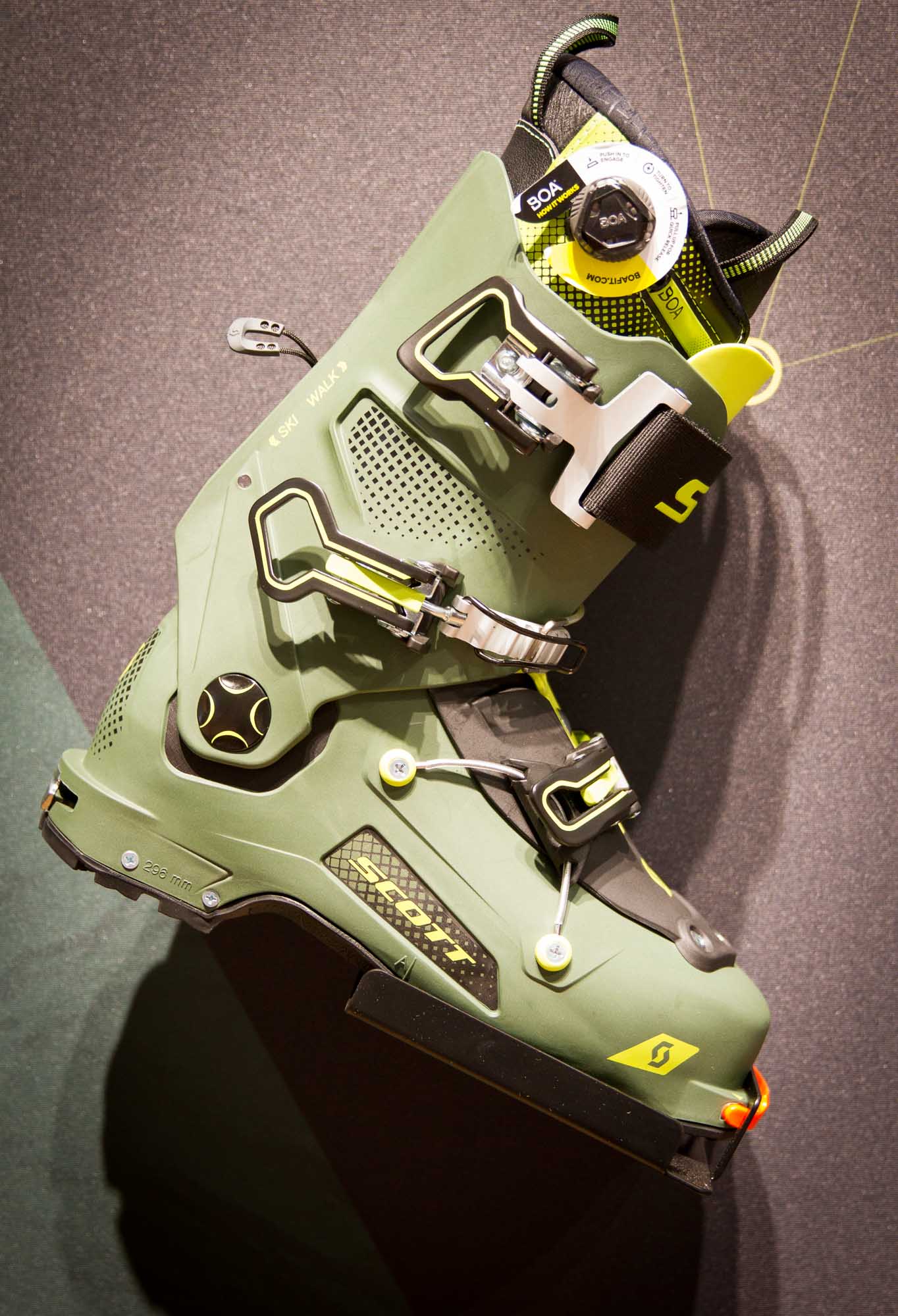 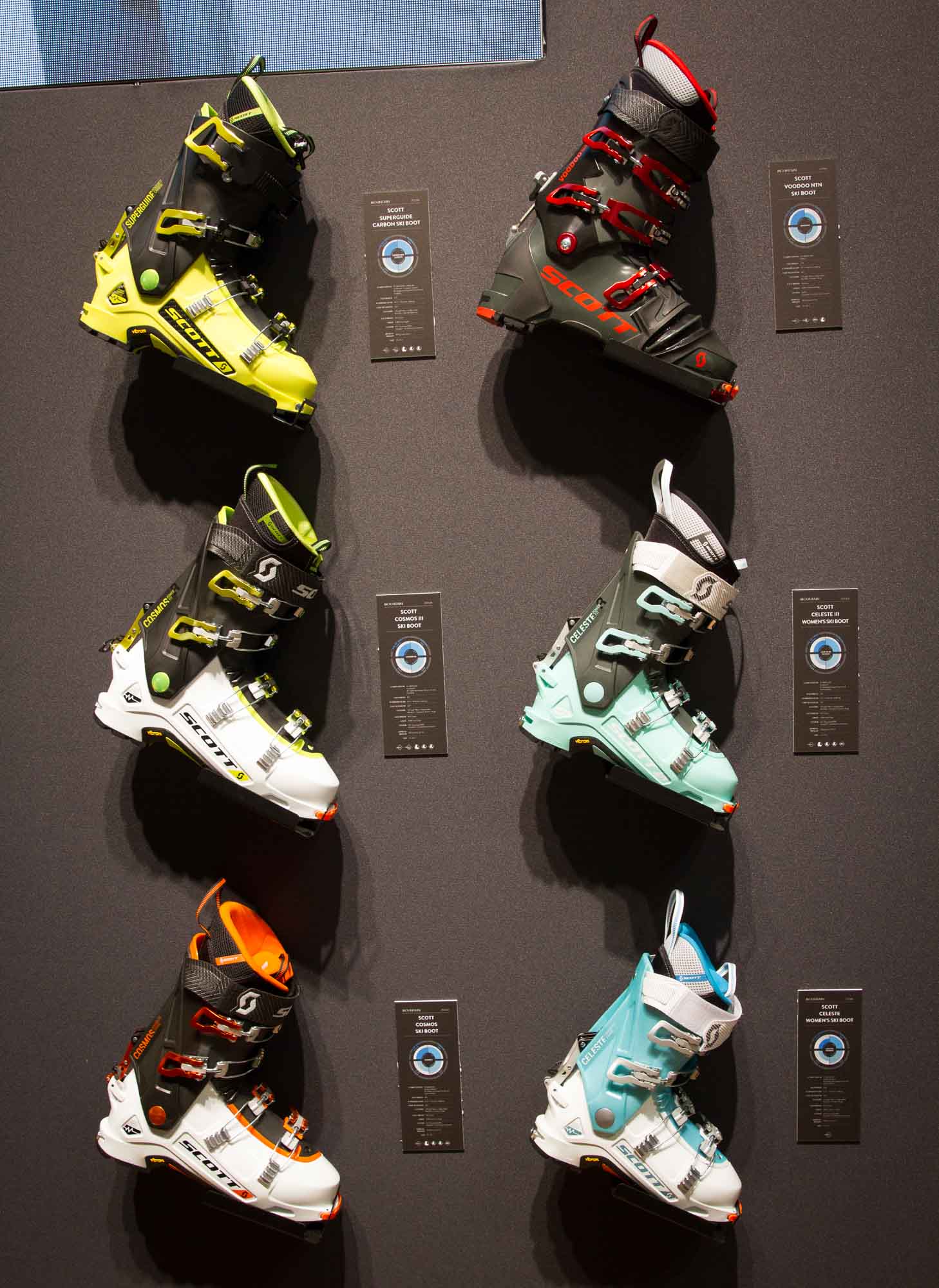 The Freeguide Carbon joins an already extensive collection of touring boots from Scott. 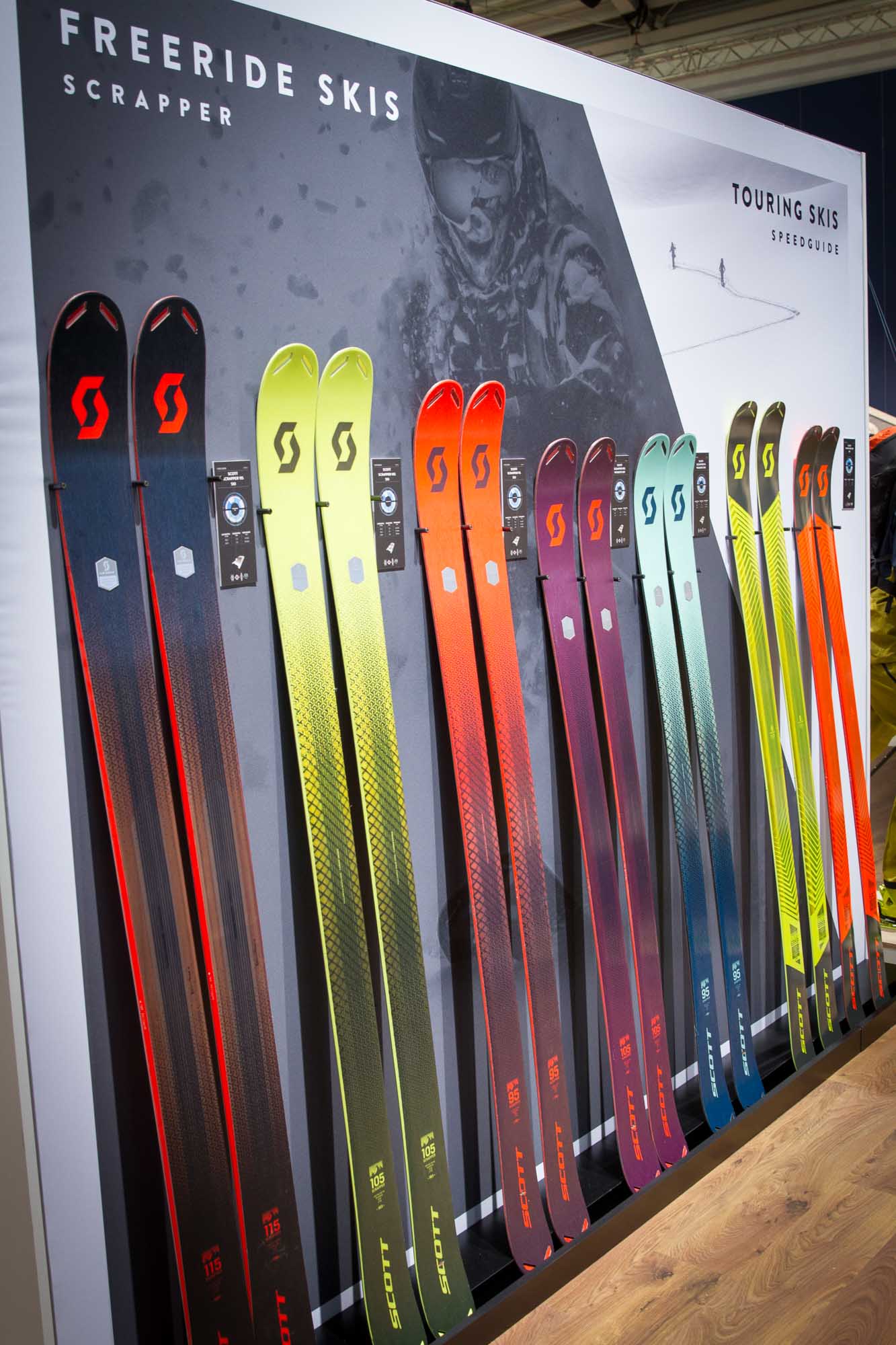 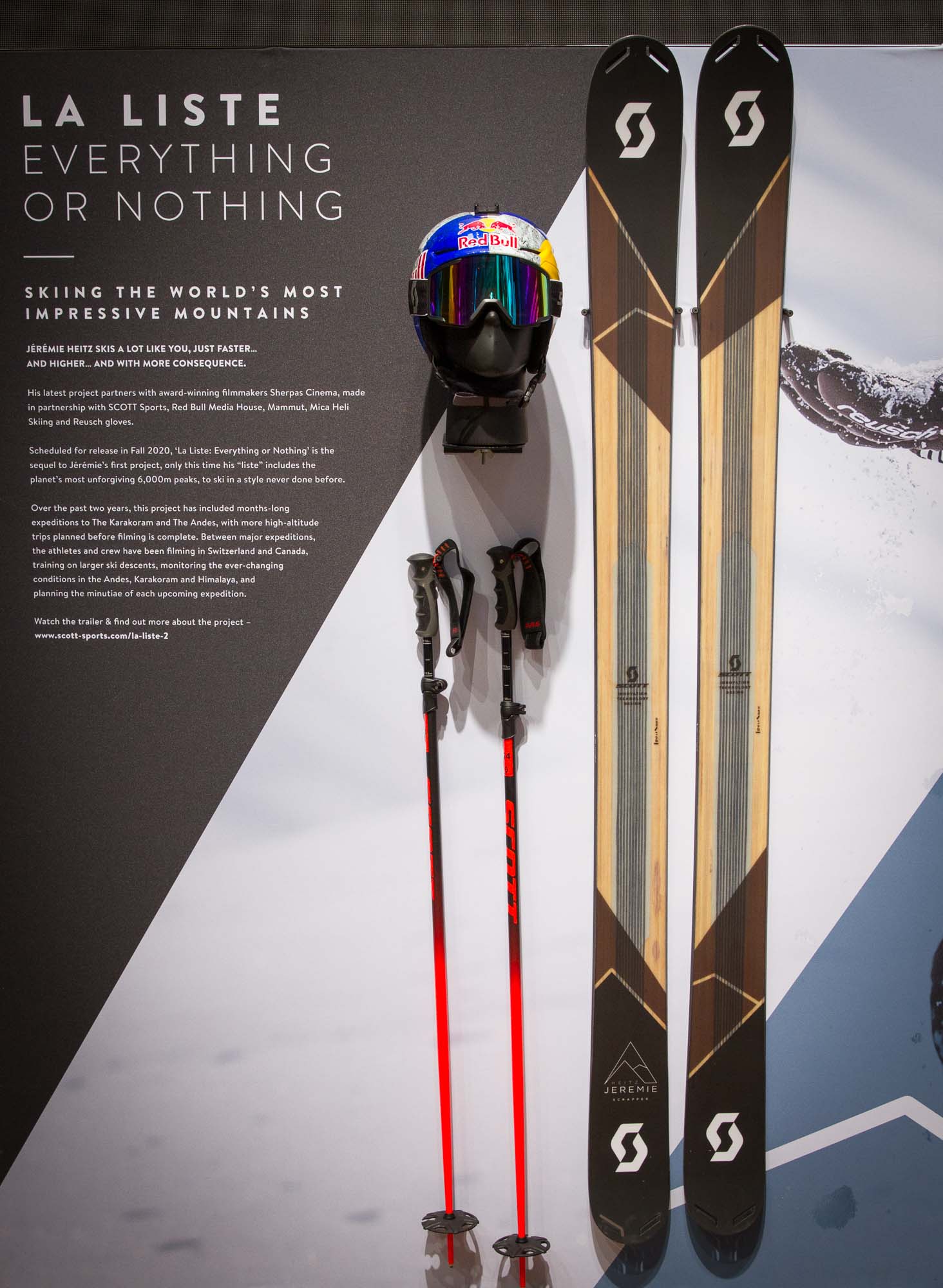 Jérémie Heitz's custom Scrappers, built to tame the mountains of La Liste 2. Only 50 of these bad boys will be made.

Like Line, K2 also have set their sights on on-piste carving with their new Disruption series. Featuring a titanal I-beam and what K2 calls “Dark Matter Damping,” the Disruptions should have you disrupting the normal traffic flow on the piste with gripped, on-edge rails.

In the off-piste department, K2 has launched a new three-ski collection called the Reckoner. Coming in at 122, 112 and 102 sizes, the Reckoner looks to be a platform of choice for the all-mountain freestyle squad with the tried-and-true blend of tip and tail rocker, some camber underfoot, and tapered tips and tails. 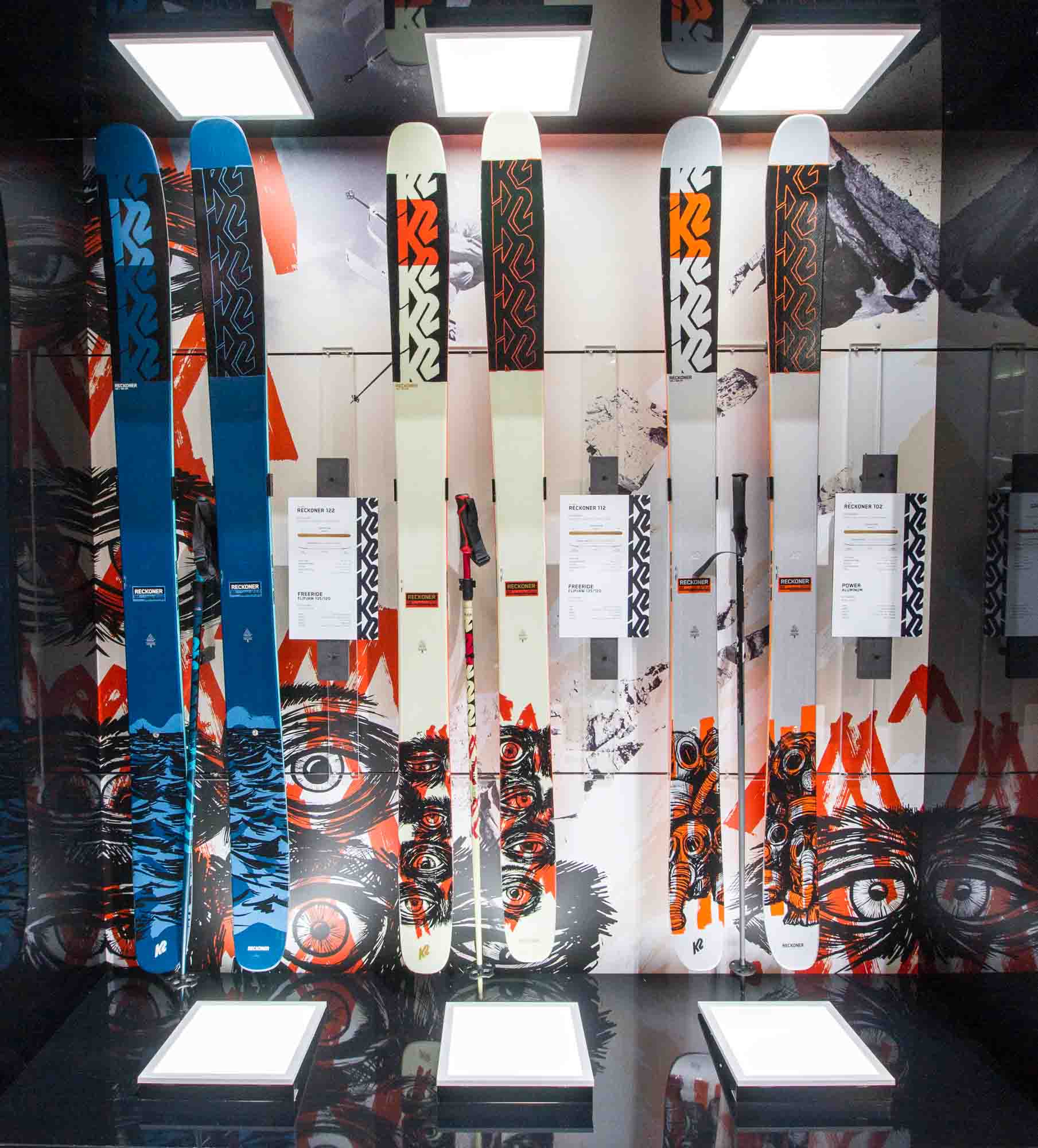 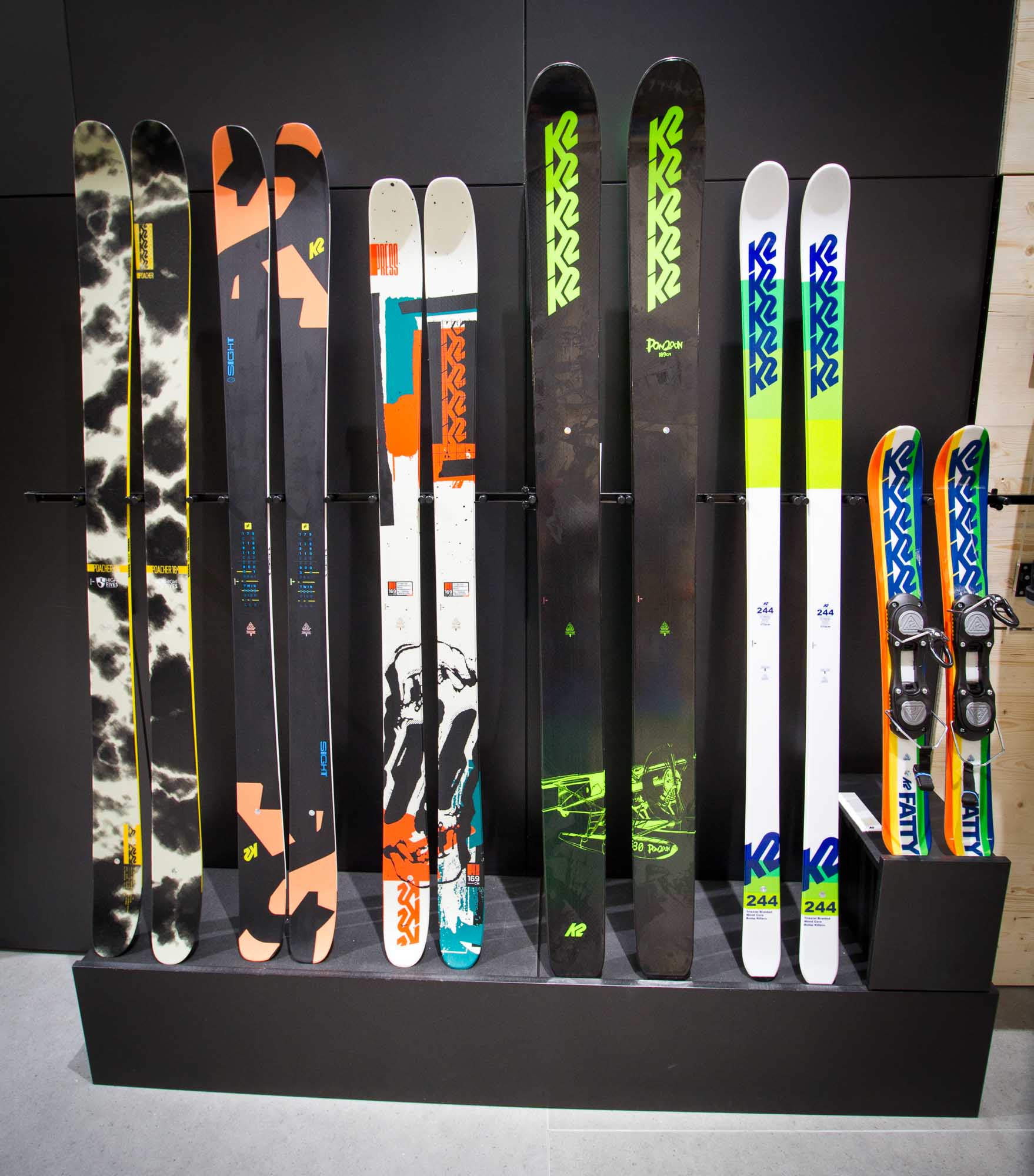 Besides the park-oriented Poacher, Sight and Press, the Factory collection is also keeping alive the Pontoons, mogul skis and yes, those are ski blades. 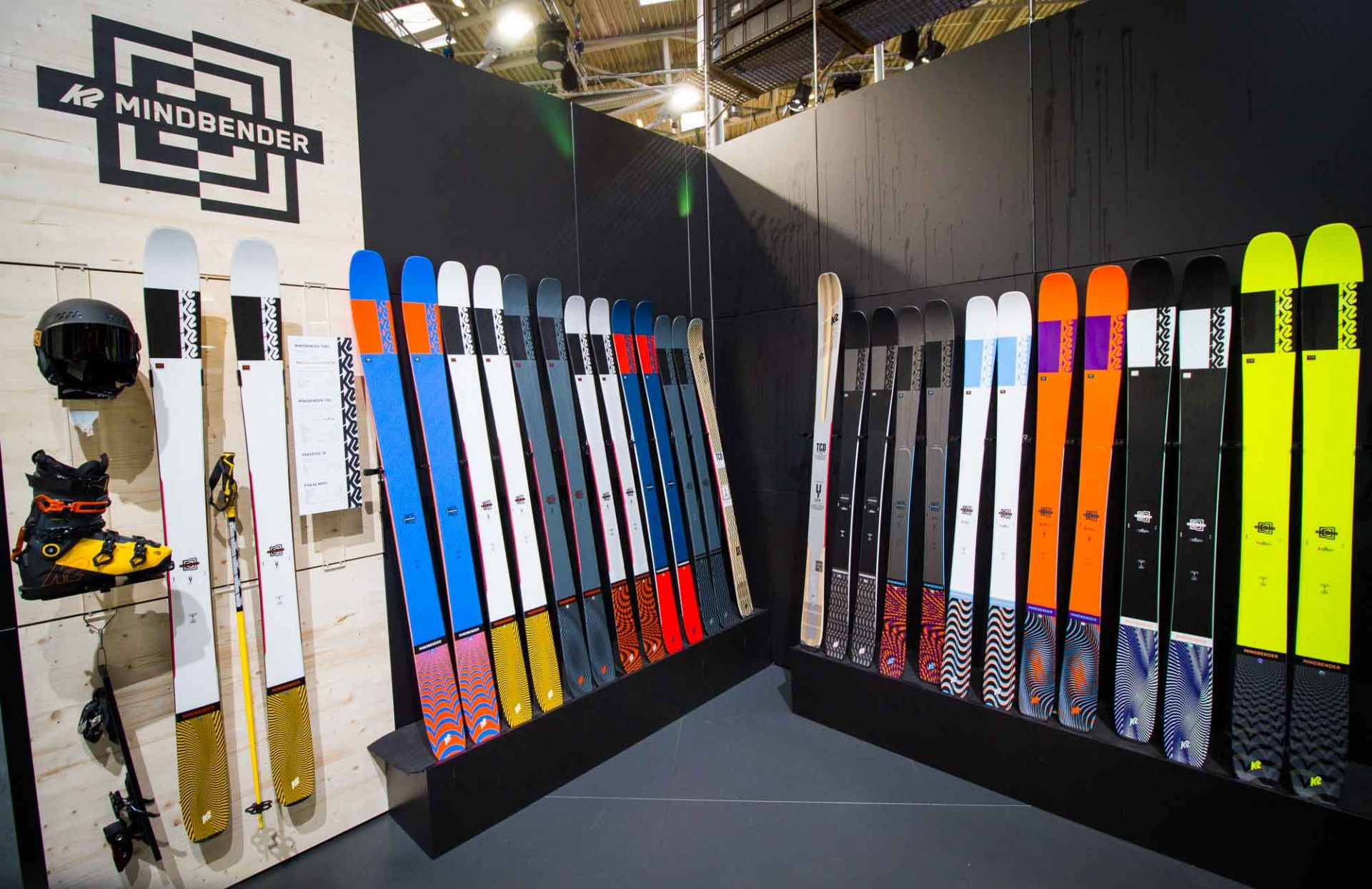 The fan-favorite Mindbender collection in a new look for 2020-2021.

After years of semi-secret development of its Black Ops freestyle powder skis, Rossignol has finally gone all-out, and blown up the Black Ops operation into a full freeride RIDE FREE collection that took center stage at their ISPO booth. 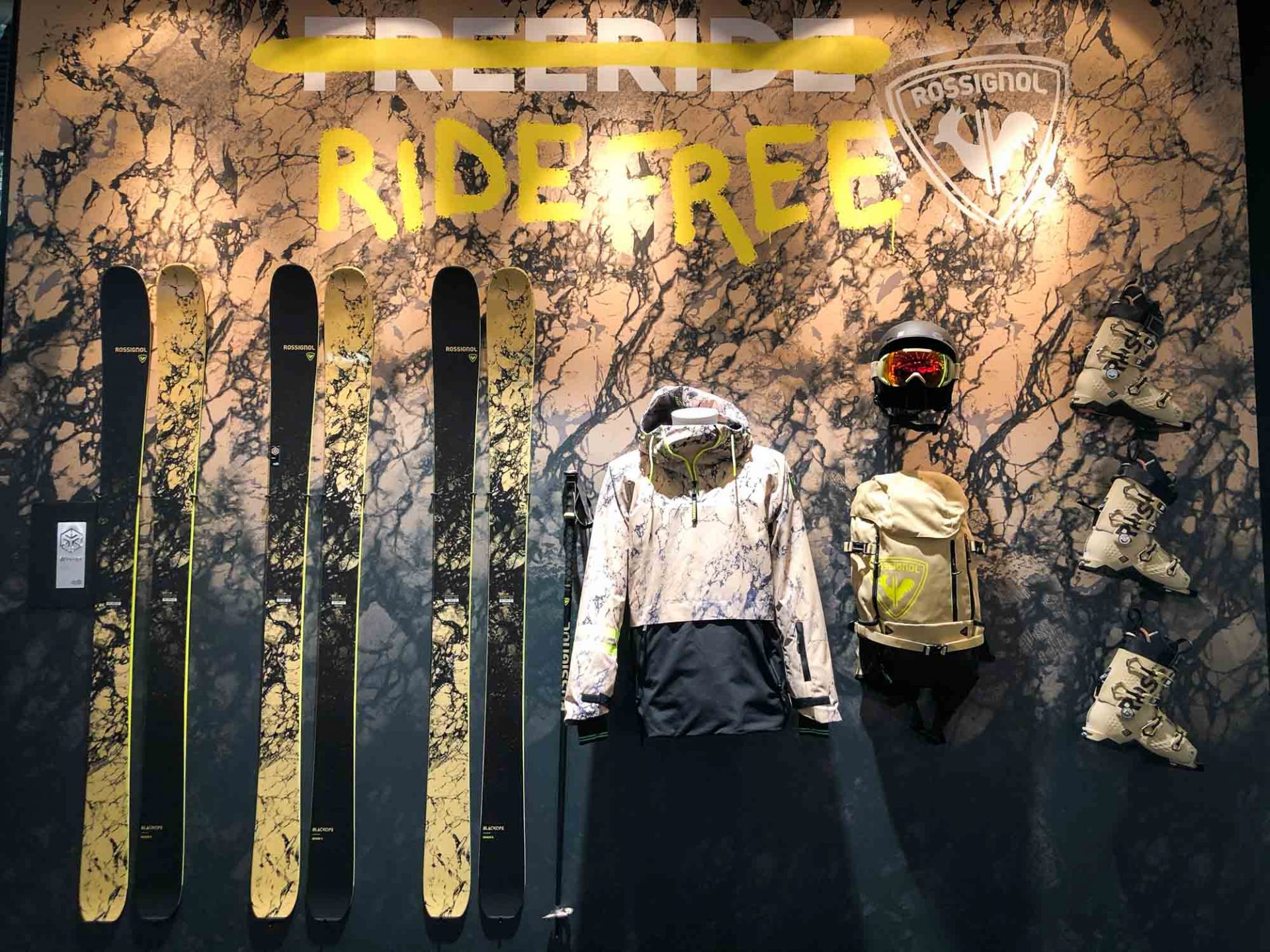 The BlackOps collection range breaks down into the BlackOps Sender Ti (106mm underfoot at 187cm), which is reinforced with a titanal beam, the Sender (without titanal), two touring models the Escaper and Alpineer, the all-terrain Holyshred, and last but not least, the BlackOps Gamer 118mm underfoot freestyle powder beast. 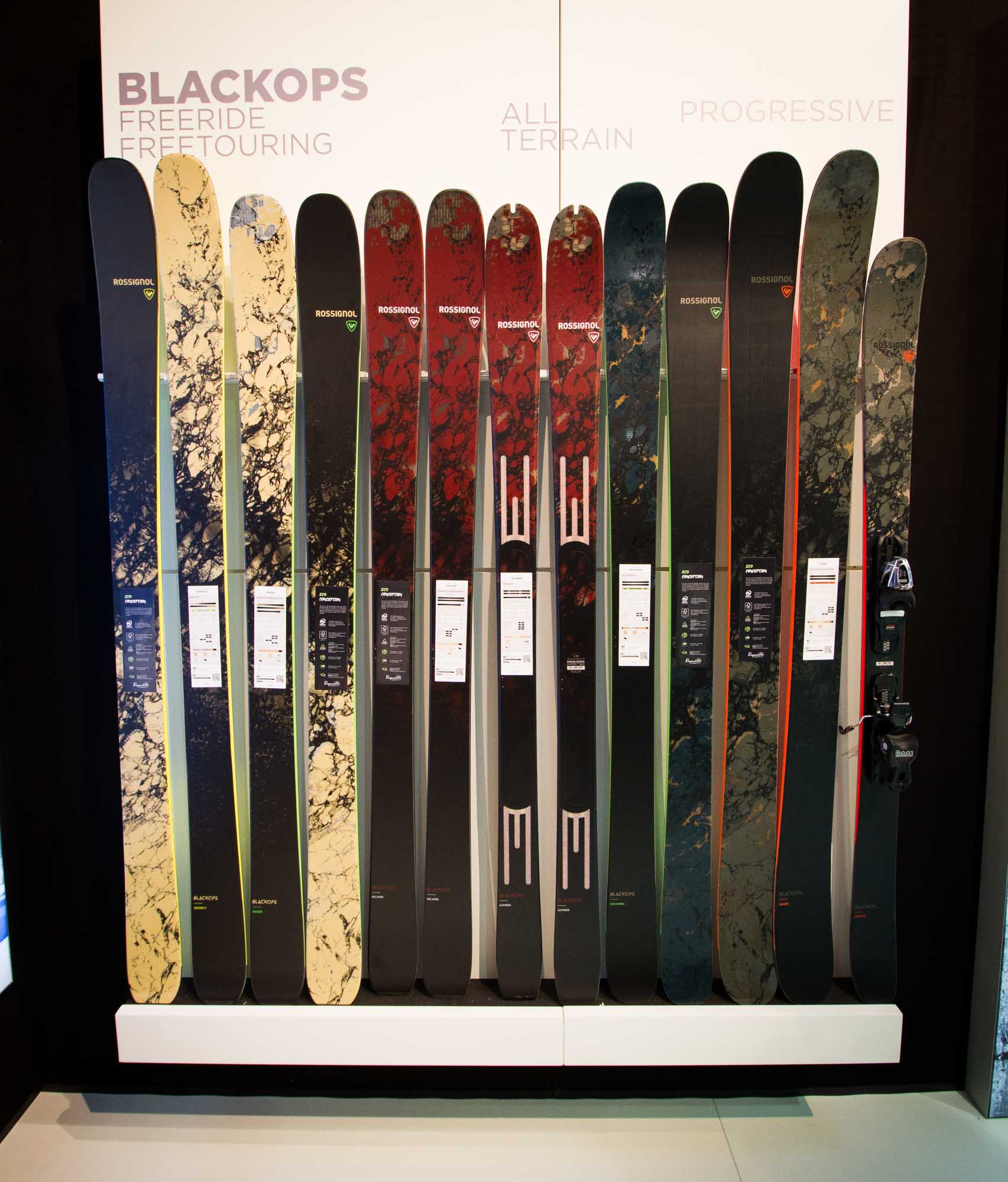 For those with a backcountry bent, Black Diamond has redesigned its Helio Carbon freetour collection with new modes in 115, 104, 95 and 88mm underfoot, filling the space between the more touring-oriented Helio Recon series and the more freeride-oriented Boundary Pro line. 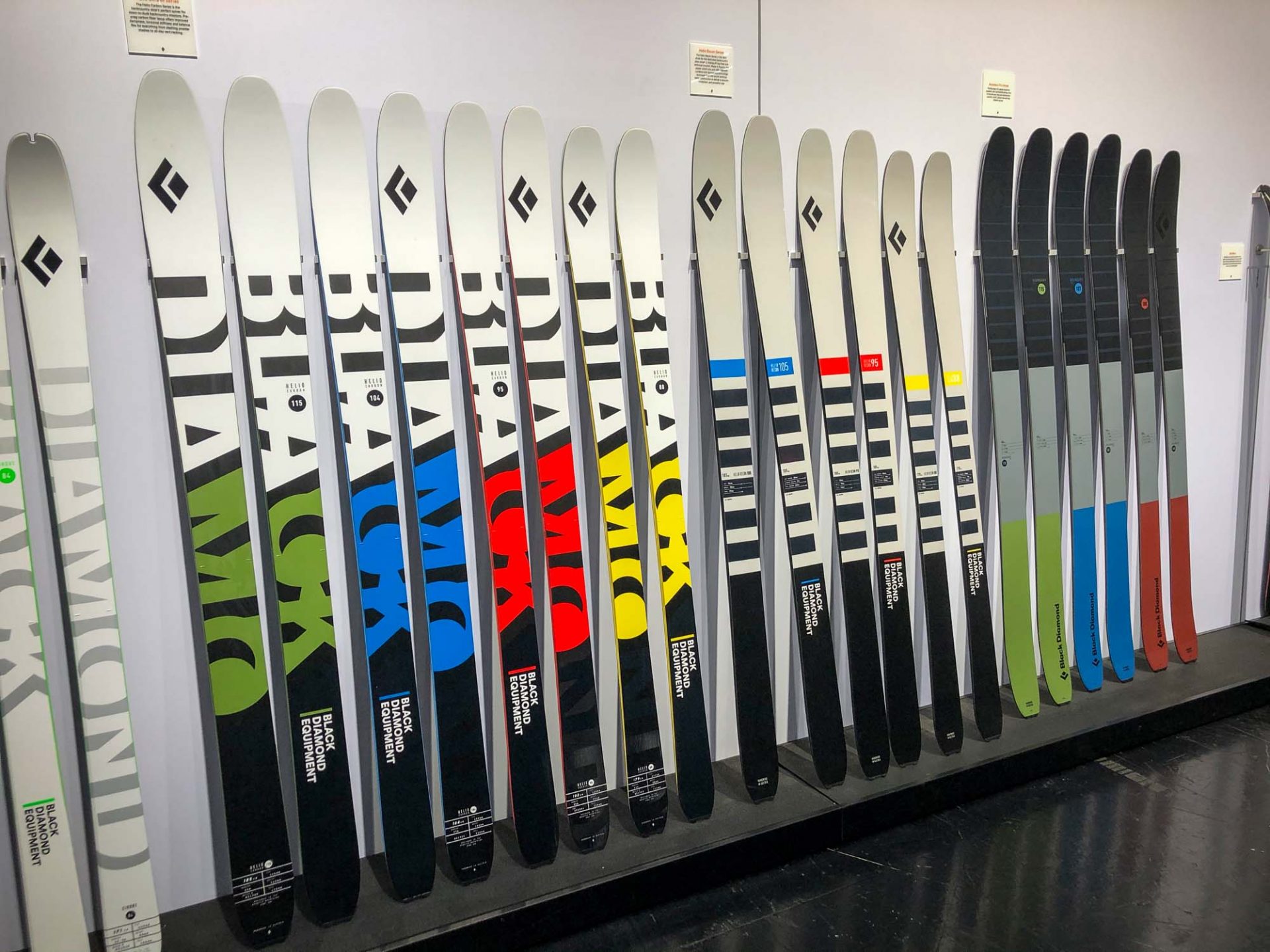 Working together with Richard Permin, Dynastar has debuted a new set of freeride planks called the M-Free line. At 118 and 108mm underfoot, these are built for the powder surfers among us. Meanwhile at Look, the celebrated Pivot binding continues to explore new colorways, with looks for 2020/21 ranging from retro-neon to straight gold bling. 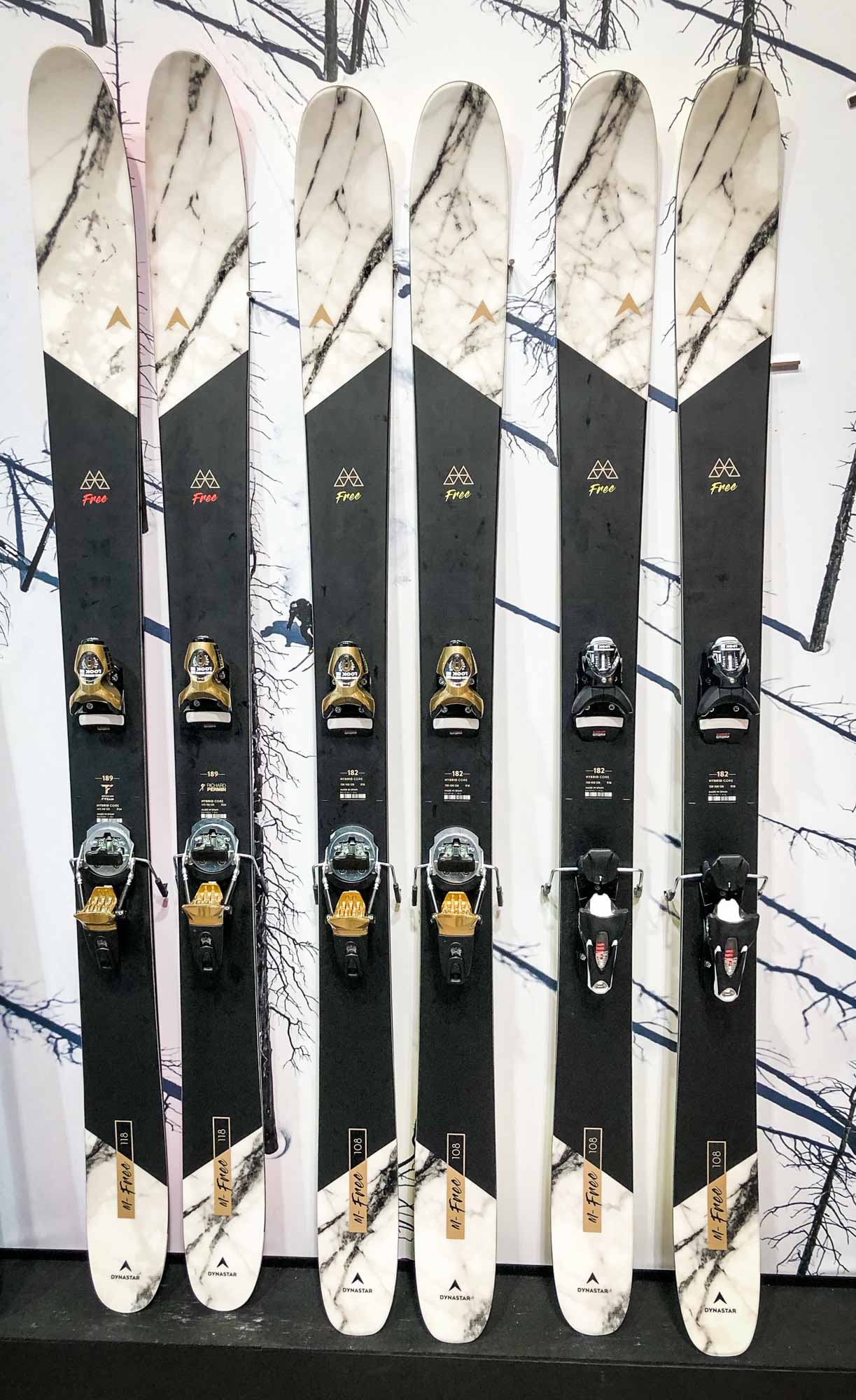 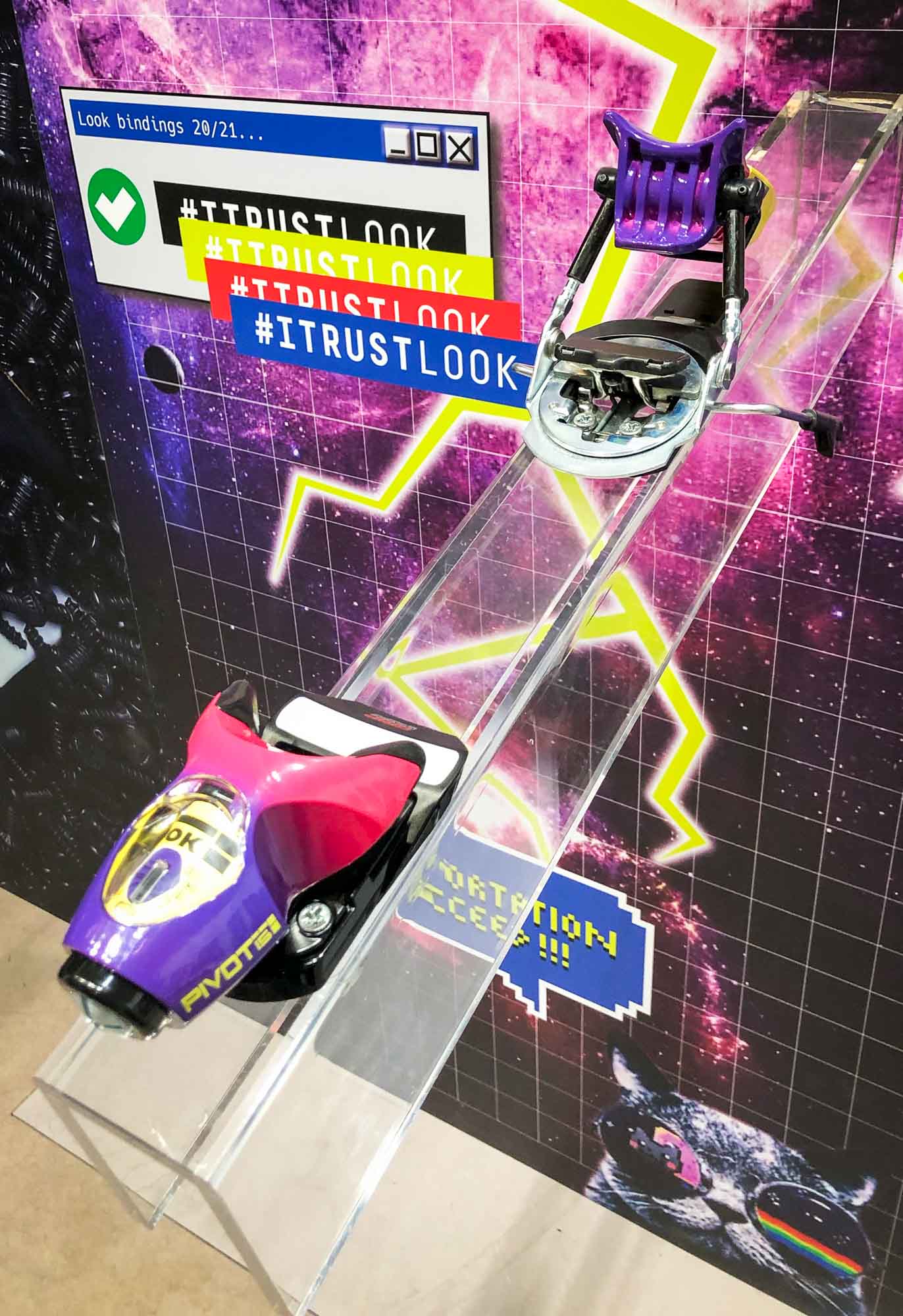 Look is now fully off the chain on color concepts for the Pivot. 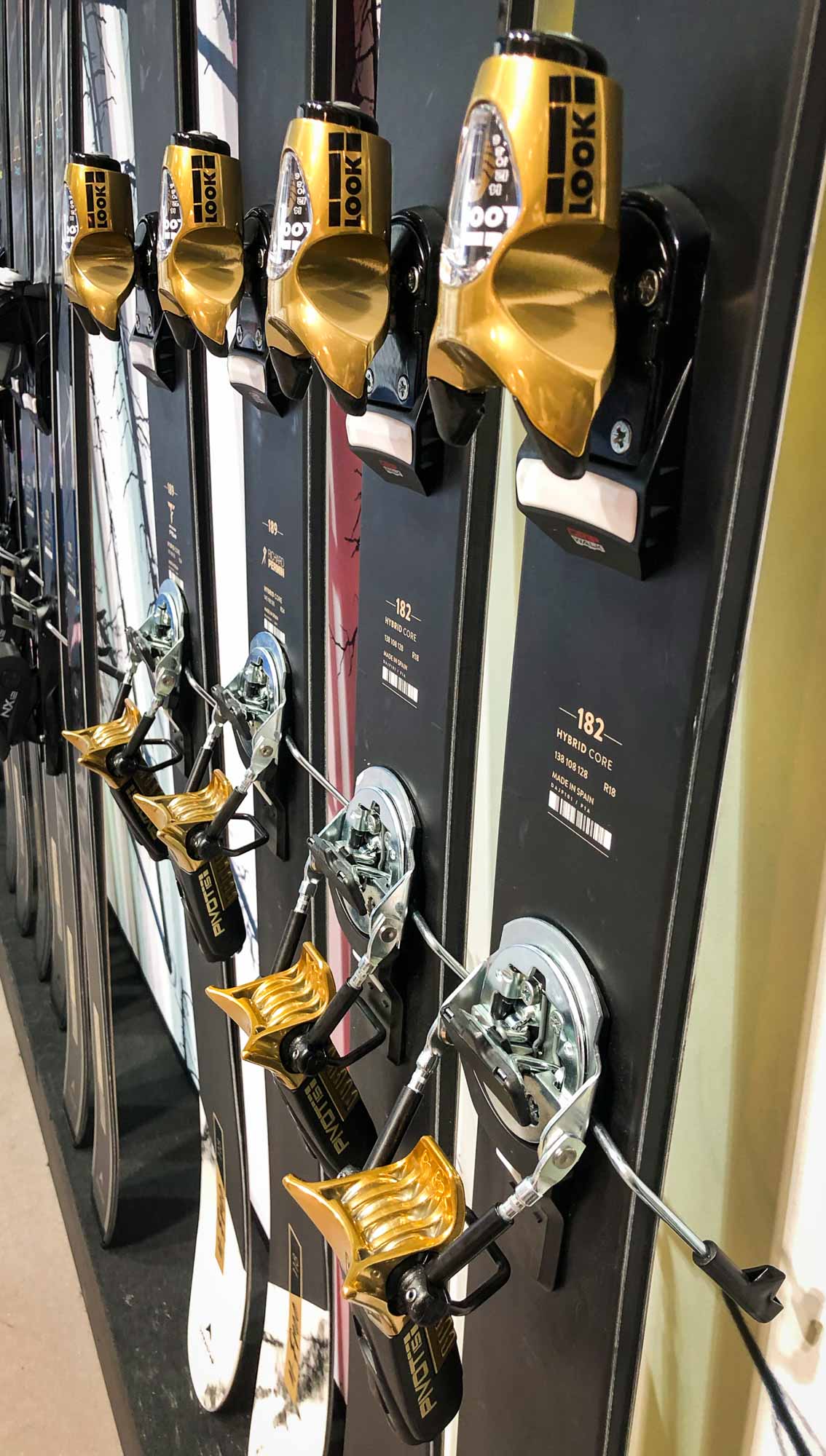 Get ready to see a lot of gold in your local terrain park. 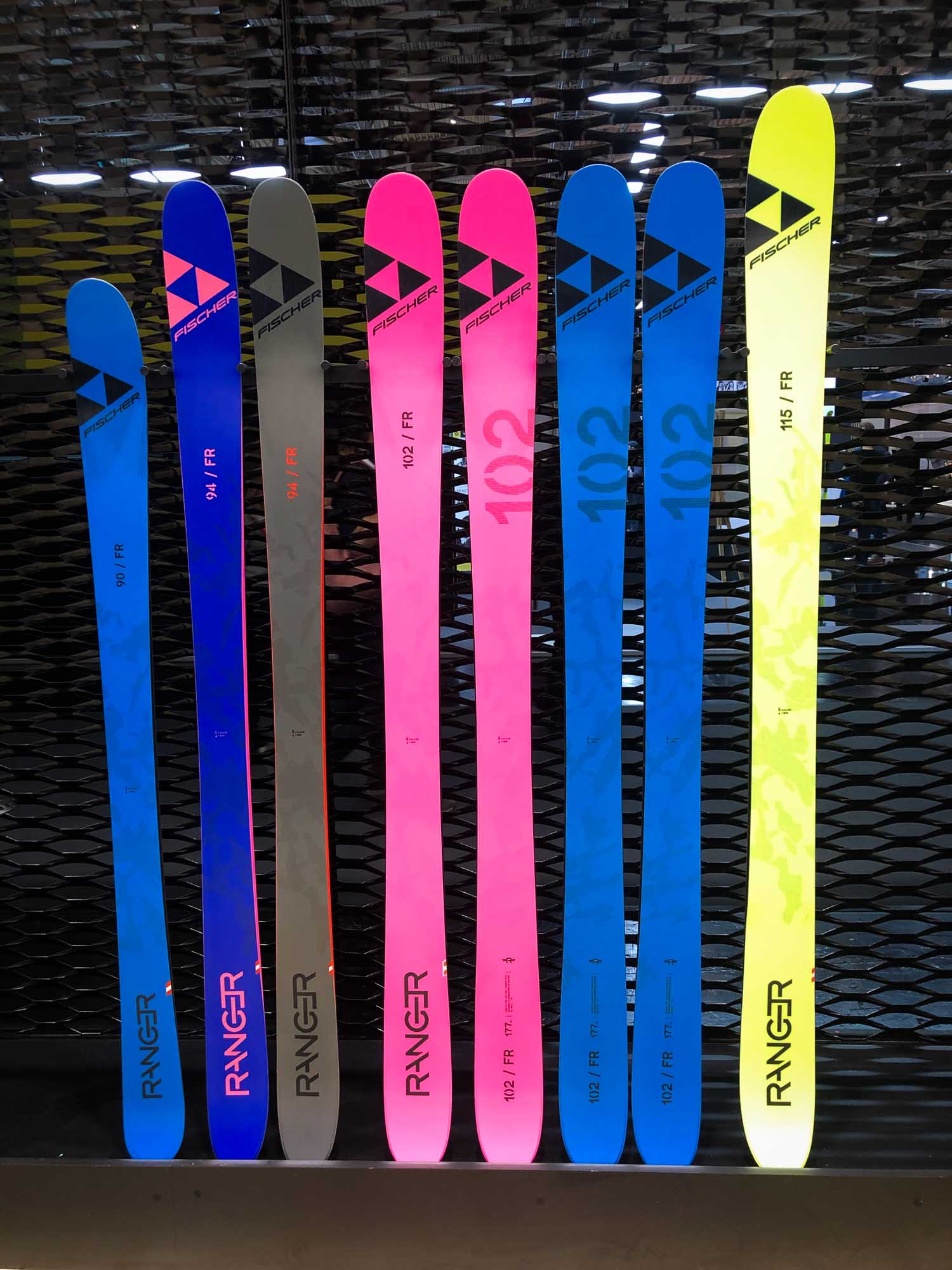 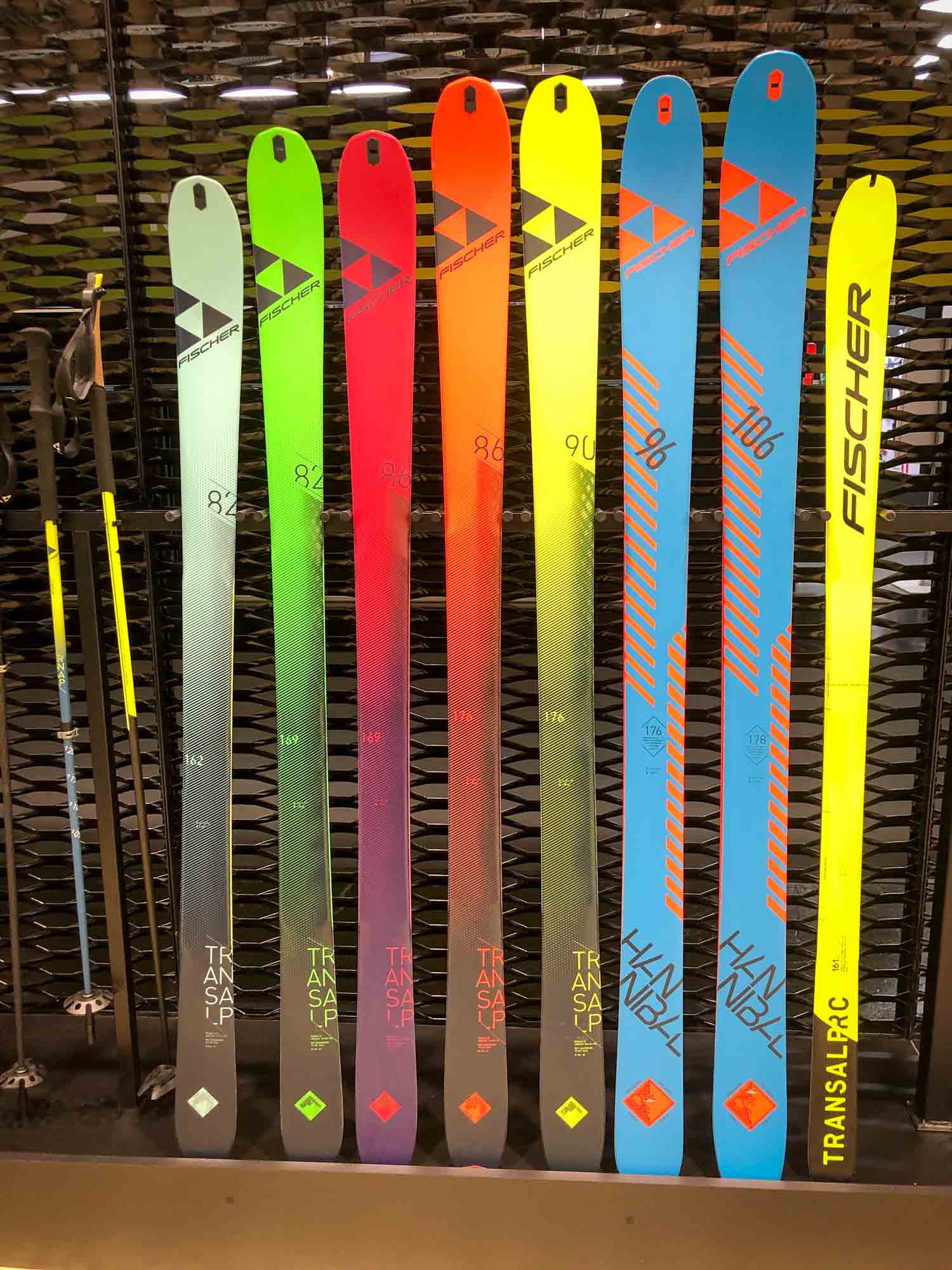 The touring lineup from Fischer. 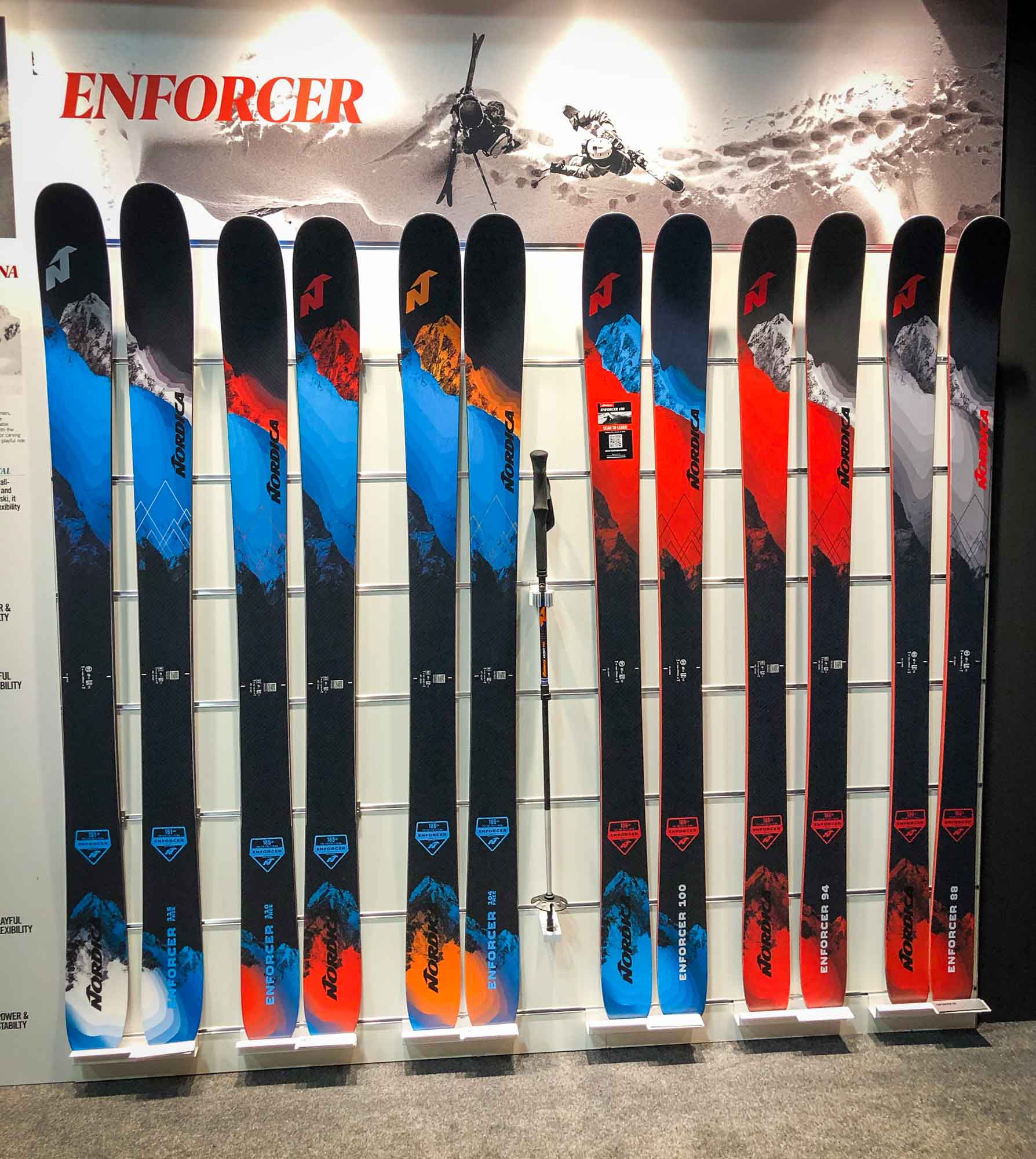