Andri Ragettli throws down for a hometown crowd. Photo: Lämmerhirt

A dominant performance by hometown hero Andri Ragettli in the men’s final, and a women’s final cancelled due to bad weather, concluded the freeski slopestyle contest at the 2023 Laax Open.

Besides the winning performances from Ragettli and Johanne Killi, the main storyline from the Laax Open remains this: Freeskiing is back in Laax! After a seven-year break in top-level freeski contests at Europe’s most celebrated freestyle resort, the return of freeski slopestyle to Laax is a moment to be celebrated. We can only hope that ski halfpipe will join the party as well in 2024. This time around, the pipe riders were busy with a World Cup contest of their own in Calgary. 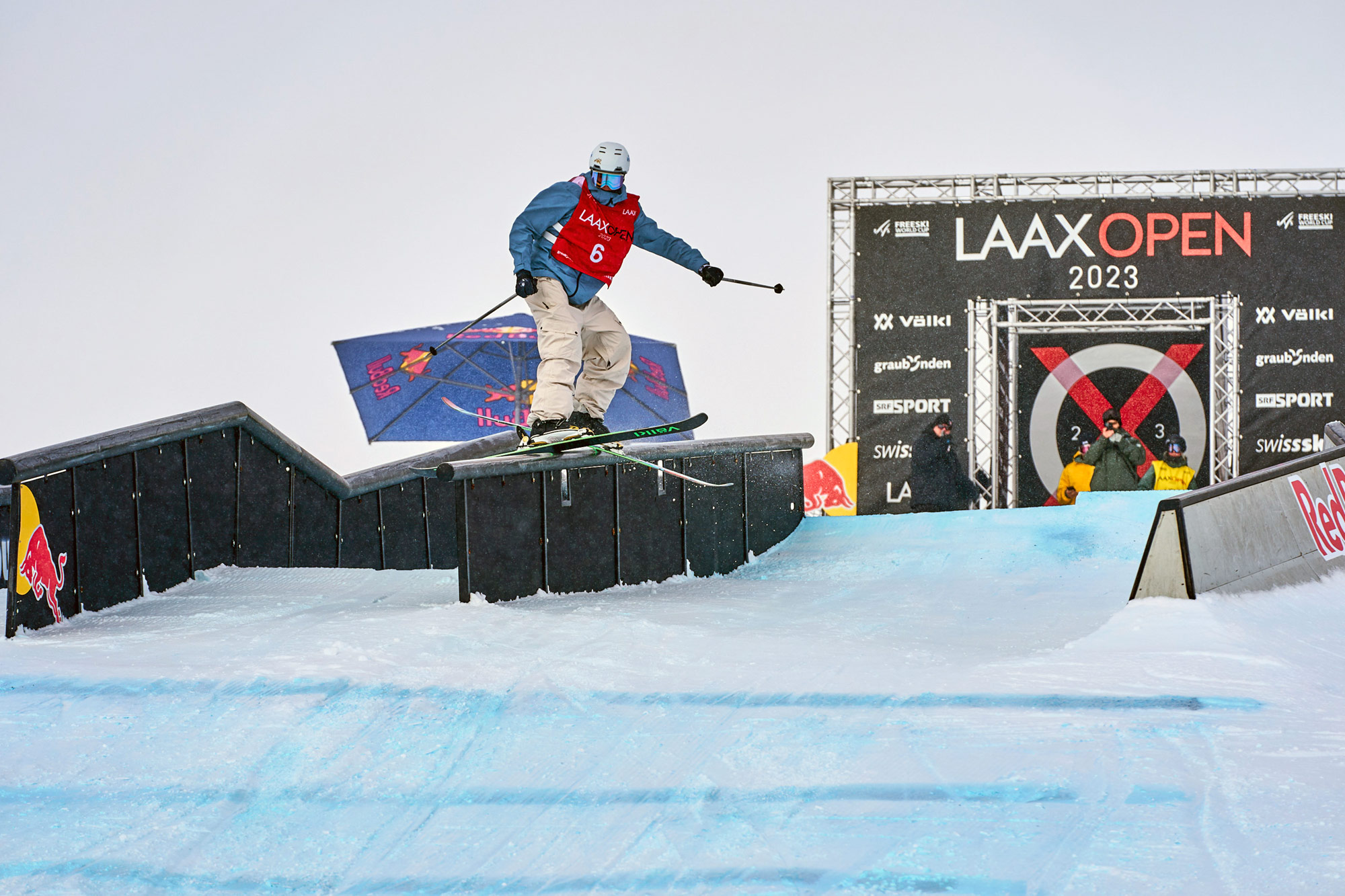 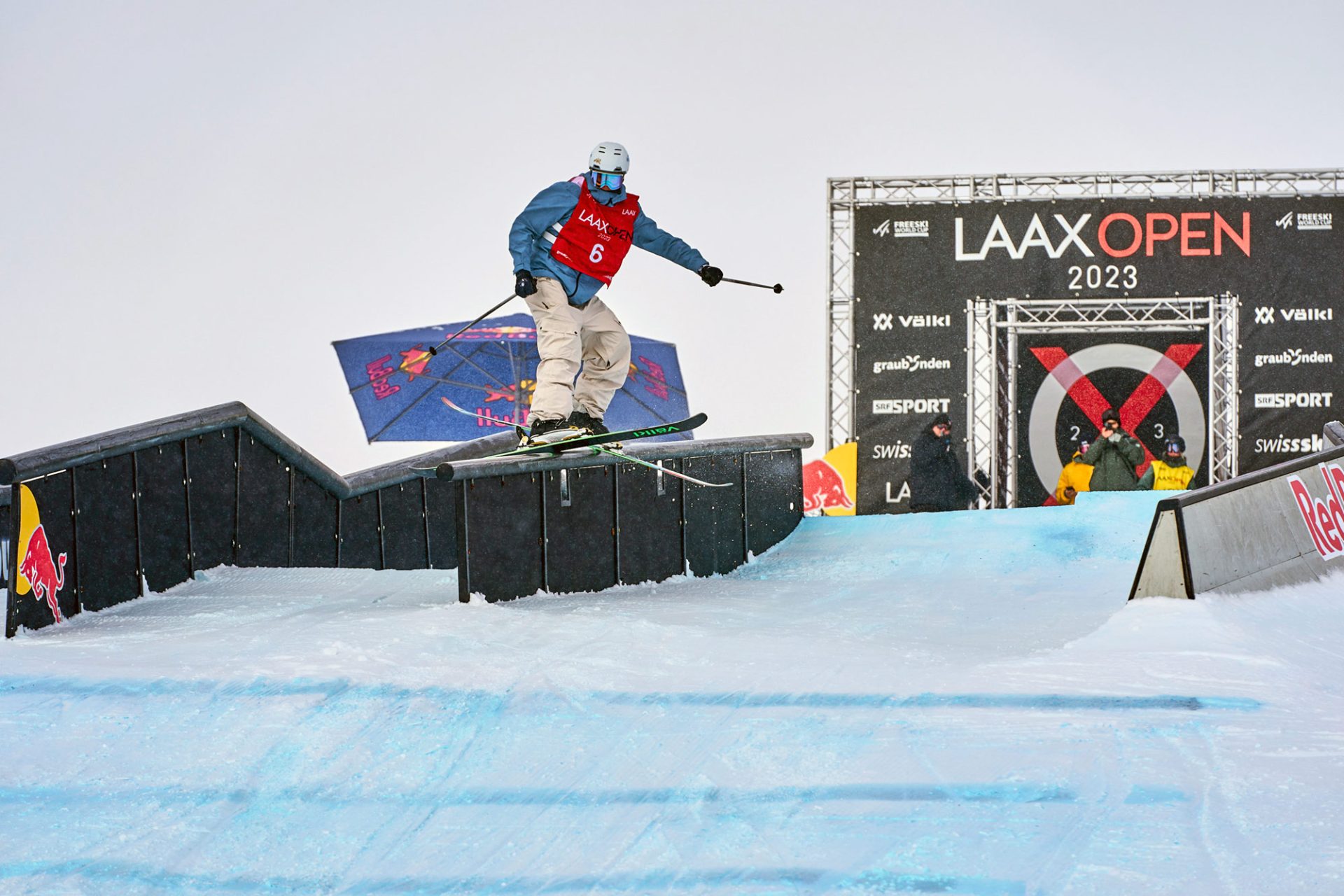 A man with a plan on his home turf, Andri Ragettli was the man to beat this weekend. Photo: Ruggli

Given the weather, we’re lucky that these men’s finals took place at all. Over the week, Mother Nature threw everything she had at Laax: subzero temperatures, fresh snow, wind, clouds and fog turning the pristine slopestyle course into less of a playground and more of an obstacle course. On Sunday, the weather let off just enough for the men’s finals to go down, although it was a close call.

Given the slow conditions due to new snow, wax jobs and weight proved crucial, with many unable to find the speed necessary to clear the jumps. 1620s were dialed back to 1260s and 1440s to 1080s as the finalists did whatever was necessary to land a clean run, or crash in the attempt.

In the end, it was the precision and consistency of Andri Ragettli, who grew up riding this snowpark, that carried the day. Andri’s run included a risky lip-on front swap transfer to back 270 out in the top rail section, followed by a more standard 270 on to continuing 450 out of the second rail. In the jumps, he found speed for a right double 1260 mute, a switch left double misty 1260 double mute, and a left double 1620 tail, before finishing with a switch on, front 270 out into a switch right 720 japan on the final butter pad feature.

Although it might not have been as creative as some other runs we saw today, it was certainly the most flawless, and that’s what locked down the win for Andri on his home turf.

“Its crazy, fifteen years ago I was a little kid here, cheering Shaun White and those guys,” Andri told us after the contest. “I did my first 360s and backflips in this park. It’s amazing to have a World Cup here, and to end up in first place is crazy.”

“The whole week I was a bit nervous and tense, because I knew a lot of people were going to be here here, a lot of fans and family,” he added. “Since it’s a home World Cup I do want to perform well, and so I’m really happy that it all worked out and that I was able to land my first run in finals under very challenging conditions.” 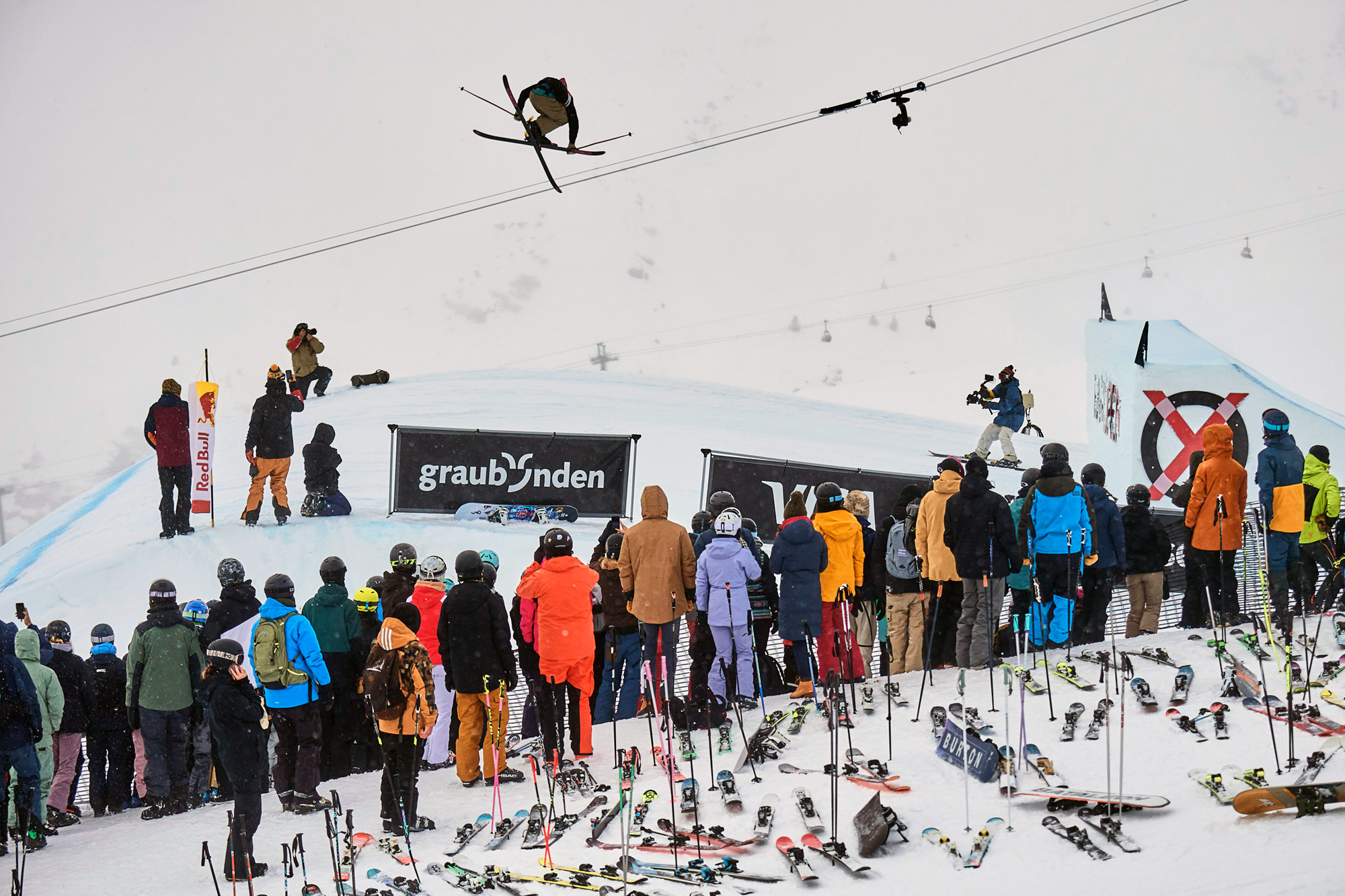 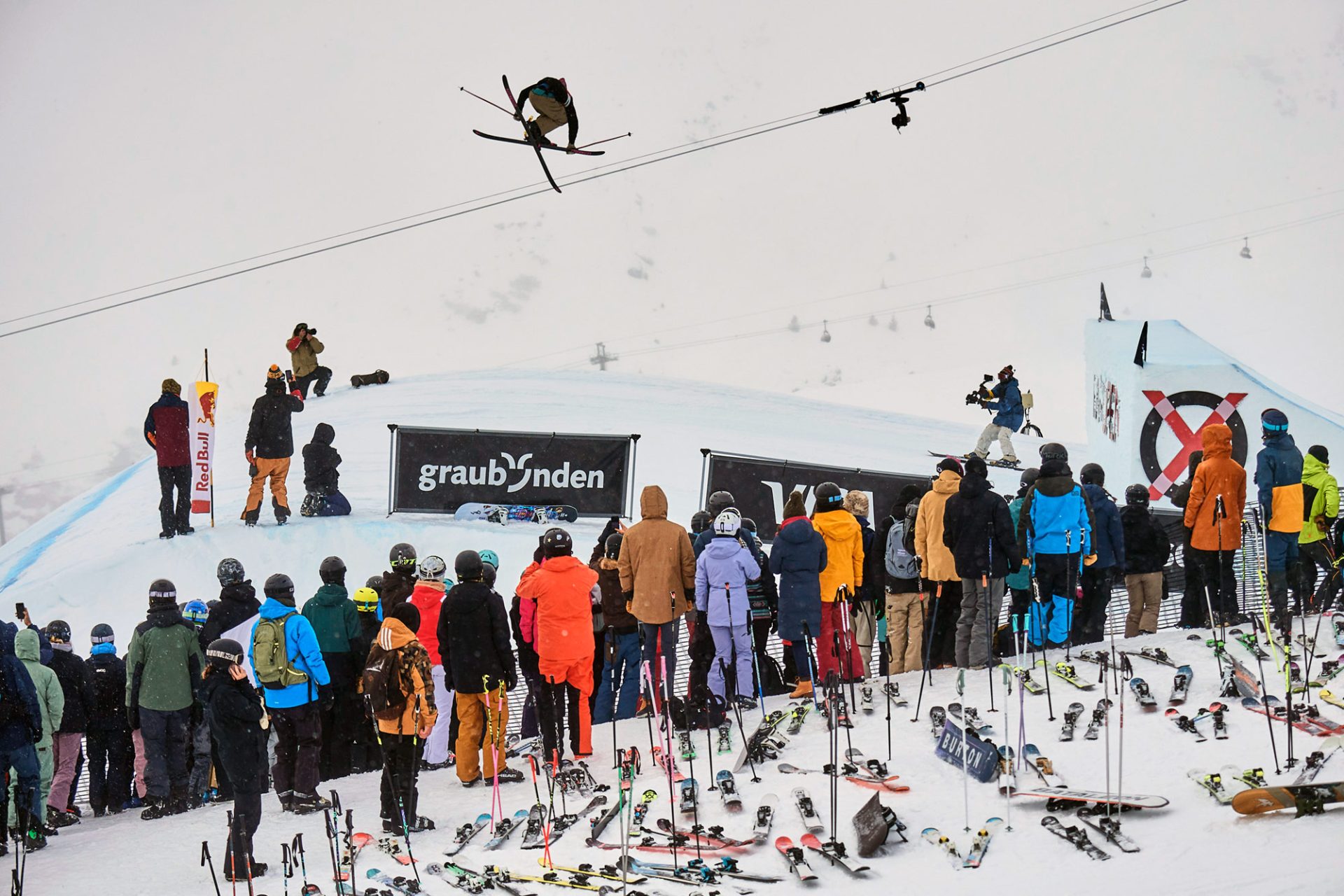 Alex Hall brought creativity and consistency to the table, but at the end of the day, his spin count wasn't as high as Andri's. Photo: Lämmerhirt

Alex Hall skied to second place with a run that featured a healthy dose of creativity. A-Hall served up the same swap transfer as Andri, then mixed things up with a switch right 270 on, front 450 out, buttering the knuckle smoothly on his exit. In the jumps, he linked a left double 1260 mute into a huge switch right double 1080 safety, finishing with a switch left double 1440 lead japan. He then brought the butter to the butter pad, switch 270ing up and tokyo drifting across the whole pad before exiting with a clean 450 safety poke.

It was a gorgeous run that lacked the same amount of rotations that Andri delivered, a crucial detail that tipped the scales towards the Swiss rider.

“It was tough—the morning was pretty good, and it just slowly got worse and worse, and now it’s really coming down, Alex said. “We got the comp done. it was a little bit of a bummer. I’m sure that all of the boys wanted to throw down, myself included, and try our best runs. It’s always a bit of a bummer when you can’t ski to your highest potential. but I’m stoked to land a clean run on my first one and walk away with second place.”

“It feels good to go out there in challenging conditions and know you can put down a run, even though the visibility or the speed is bad,” he added. “That’s reassuring. But you always want conditions to be as good as possible so that everyone can throw down.” 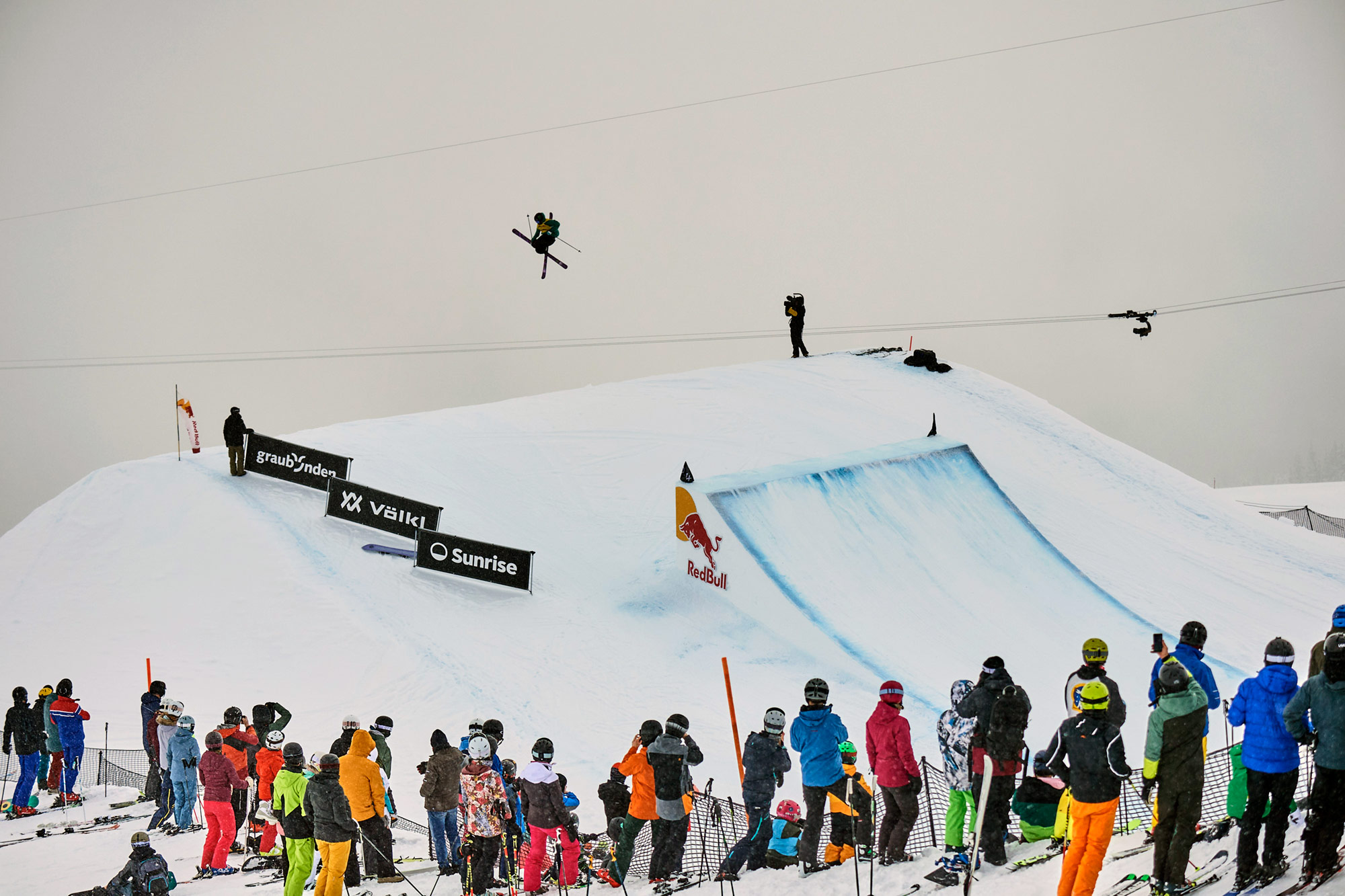 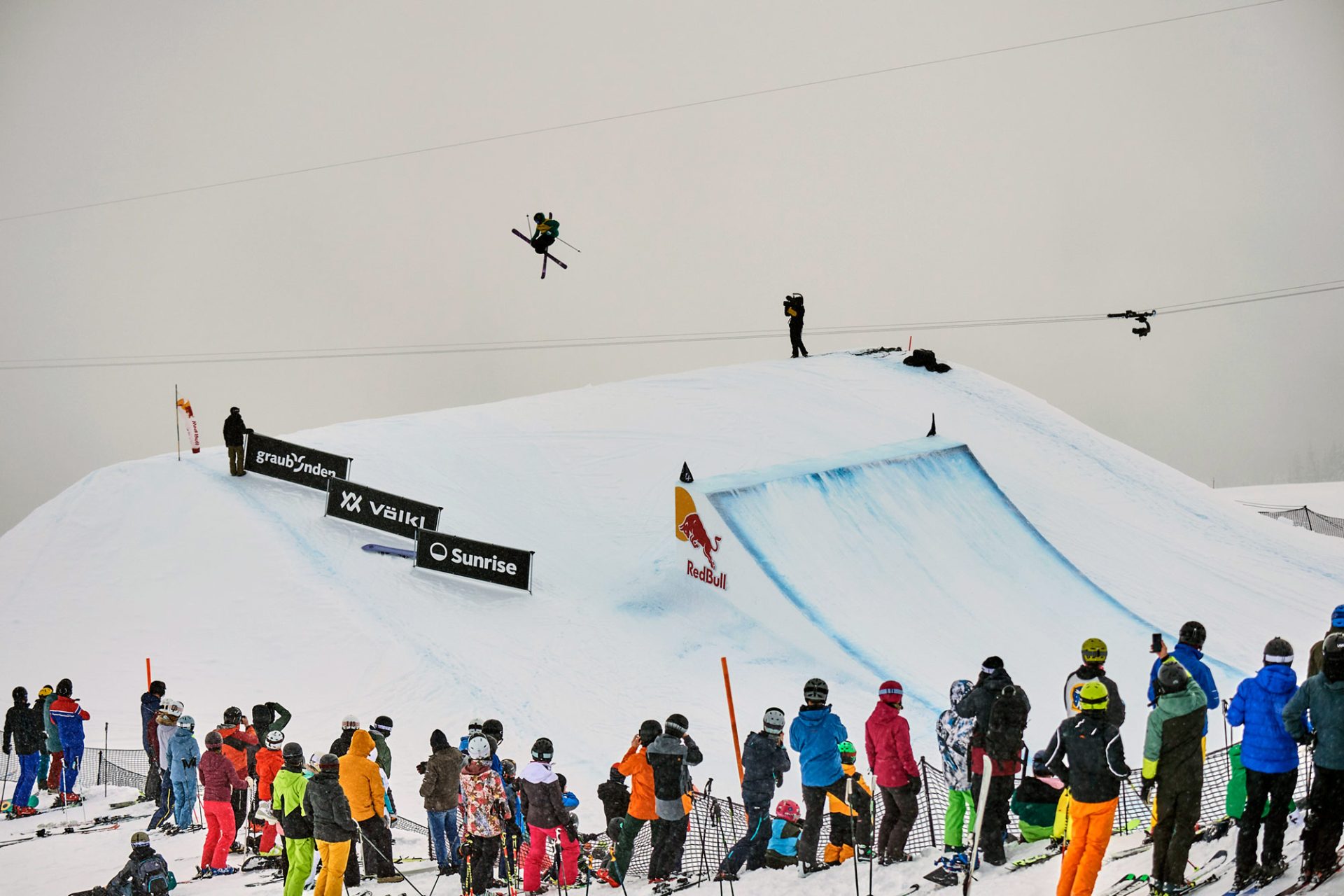 Third place went to Birk Ruud, who with a stunning nose butter 630 on in the rails, a right double 1440 and two different 1620s in the jumps, could easily have snatched the gold. Birk bobbled the landing of the nose butter 620 just a touch too much in his first run, however, and had to dial back his run during worsening weather on his second attempt.

A notable podium miss came from Matej Svancer. Matej’s run was creative and technical on every hit, but he struggled to deliver with the same consistency as his more experienced competitors. Still, he left us with some beautiful memories, including a 180 on, switch 50-50, pretzel 180 out that he even sauced up with a lookback on his second run.

“I felt so locked in, and when I was a child, I thought it was super sick when people are making a fun thing on the TV,” Matej said. “Right now I’m on the TV, so I’m trying to make it as fun as possible for everyone. And I’m down with the show because so many people see it. So it was a lookback on purpose.”

Colby Stevenson also came packing with a podium-ready run that included a monster K-fed gap on the top rail and a nosebutter 1620. But he wasn’t able to link it all together, and might have been better off following the lead of the rest of the field and dialing back on his jump tricks. 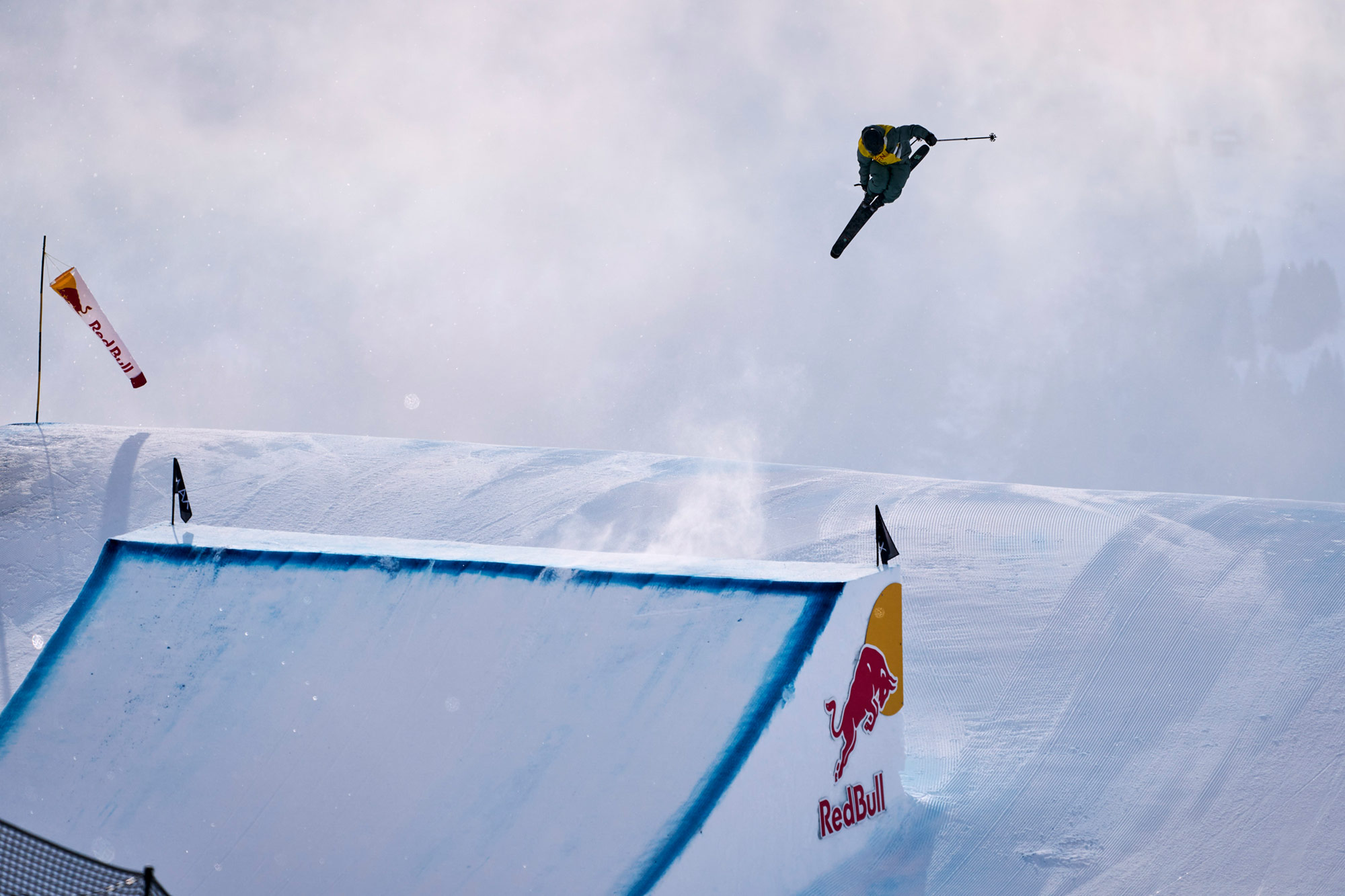 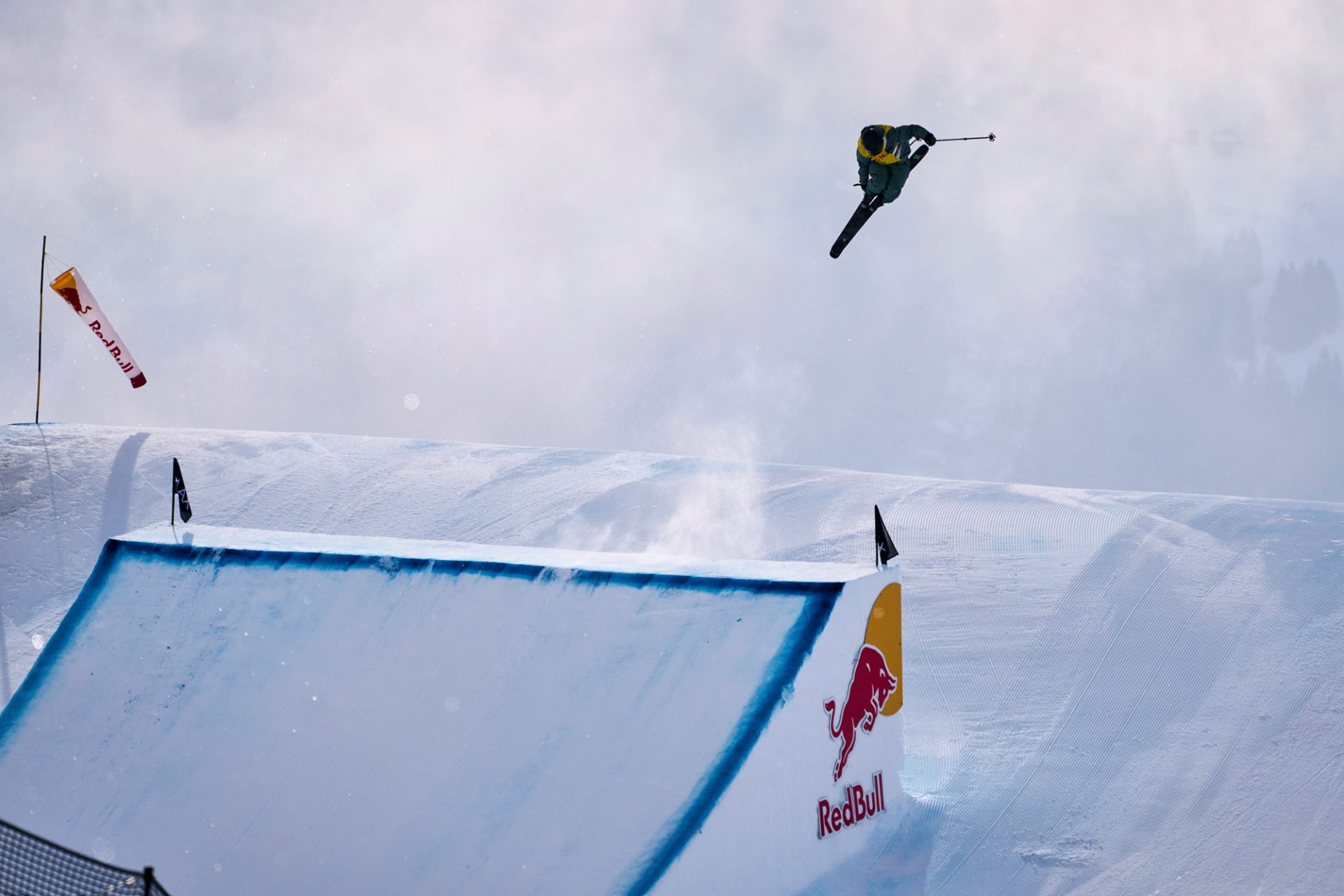 Johanne Killi kept it clean and stylish during the qualifications. It ended up netting her the win when finals got cancelled. Photo: Ruggli

The women’s finals were scheduled to run immediately after the men’s. However, with weather conditions only getting worse, the big show for the women was ultimately scrapped, and the scores from qualification pulled up to award winners.

That meant a first-place finish for Johanne Killi, whose qualifying run on Friday was the smoothest of the bunch. Johanne served up a left 270 on to switch into a switch on, front 450 out in the top rails, followed by a left cork 900 tail and back-to-back switch 720s in the jumps.

“It’s a weird feeling. I’m happy with winning, but I always want to win in a final, because then we can really show our best skiing,” Johanne said. “I cant complain about winning, but I wished we could have had finals today. I wanted to step it up in the jumps, I was planning to do bigger tricks.” 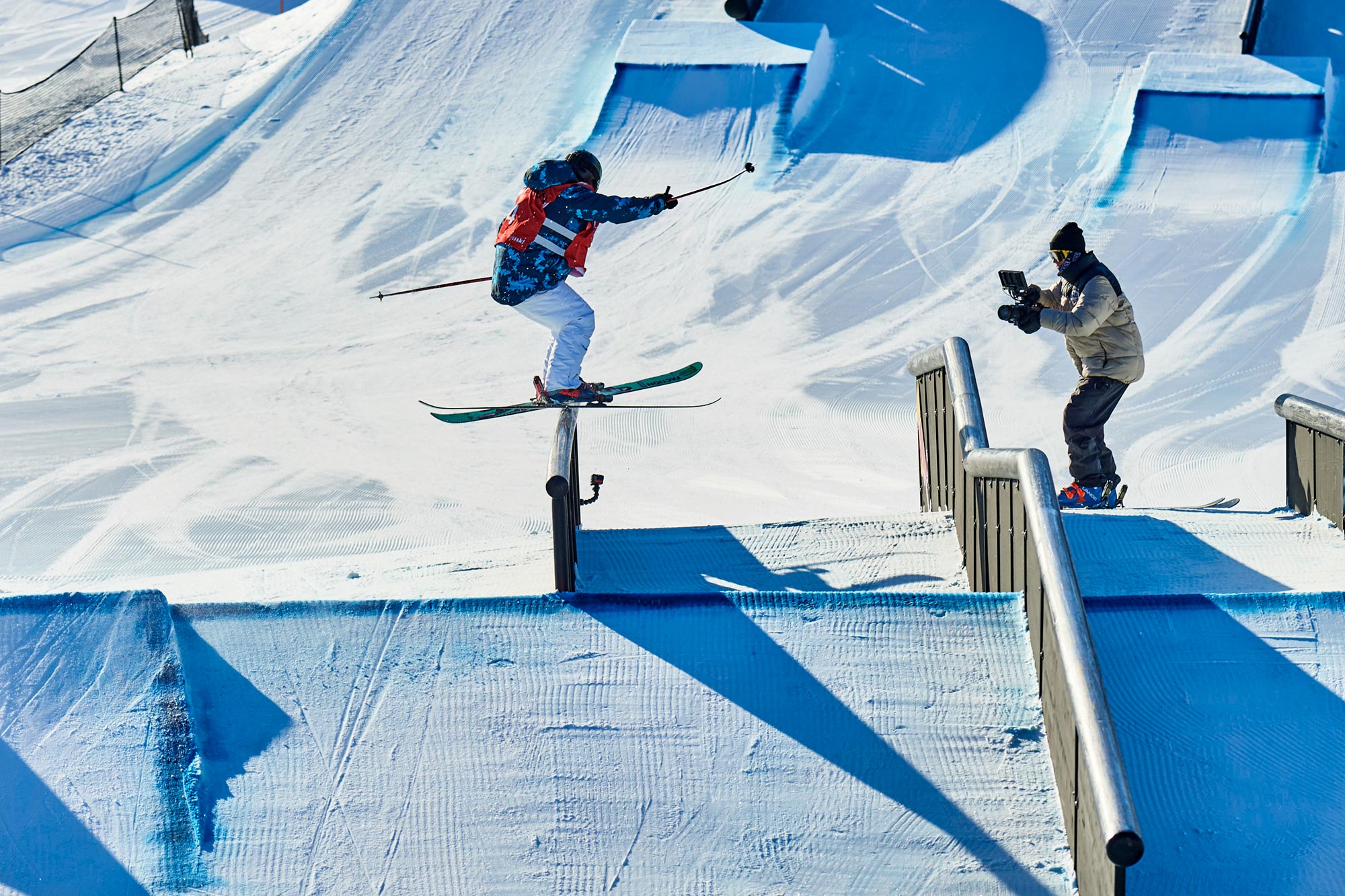 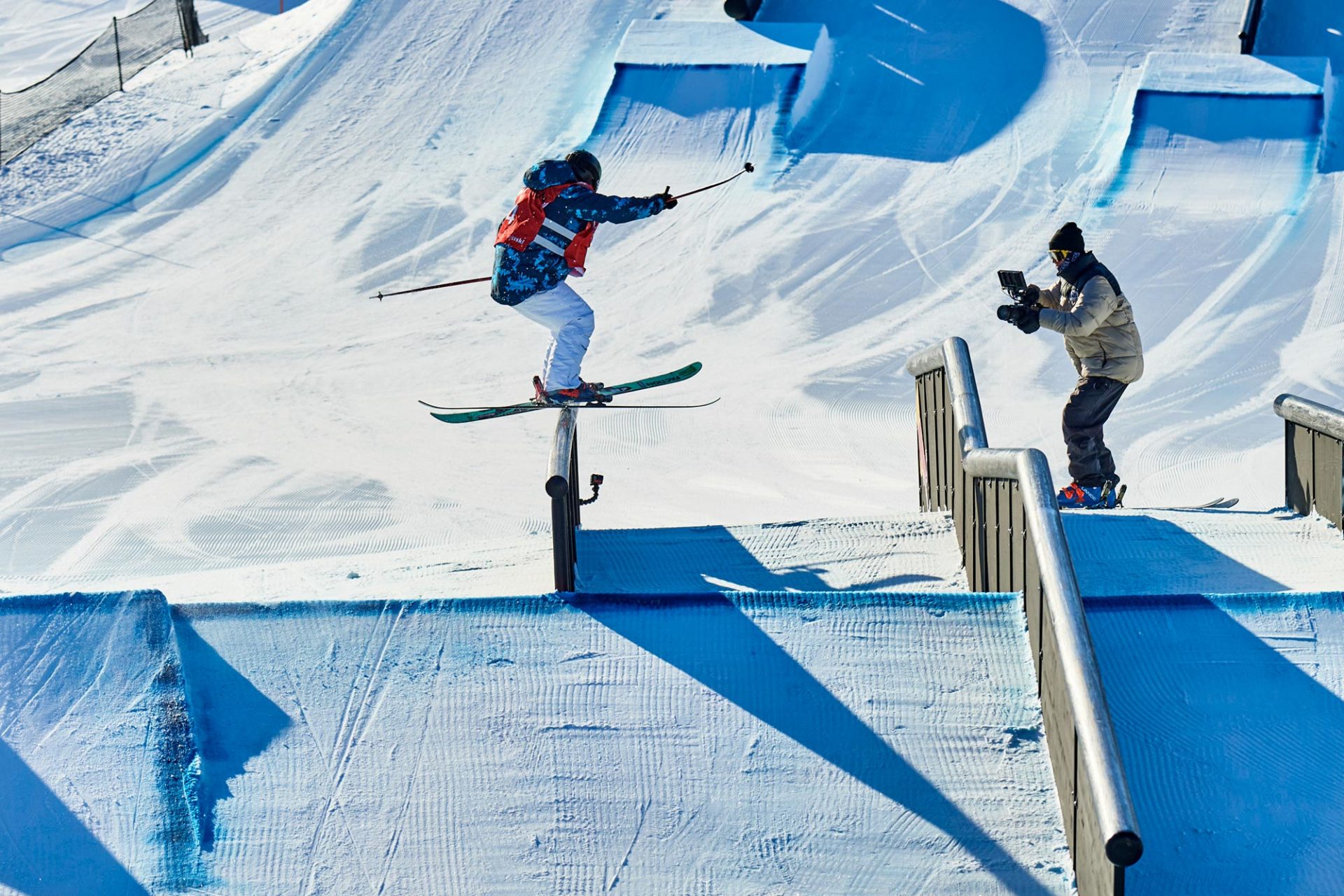 Sarah Hoefflin's got a switch lip 270 on that she still wants to show us. Next time, Sarah! Photo: Lämmerhirt

Second place went to Sarah Hoefflin, who was one of only two women to double-cork during the qualifications. Already aware that the finals might be cancelled, Sarah went for broke on her second qualifying run, tossing a monster switch right double 1080 mute that helped her clinch her podium spot.

“I’m super happy to be on the podium, but it’s a shame that we couldn’t do finals,” Sarah said. “We did have an inkling that this could happen. We looked at the weather forecast and it wasn’t good. To be honest I did have that in mind when I was doing my qualis run, which is why I stepped it up. I think think I could have had a chance for better than second, but I’m happy with second.”

“I had more in store,” she lamented. “I had a better rail run today and I’m really gutted I didn’t get to show the switch lip 2 to forwards, which I think is by far the hardest trick on the first rail from the girls.” 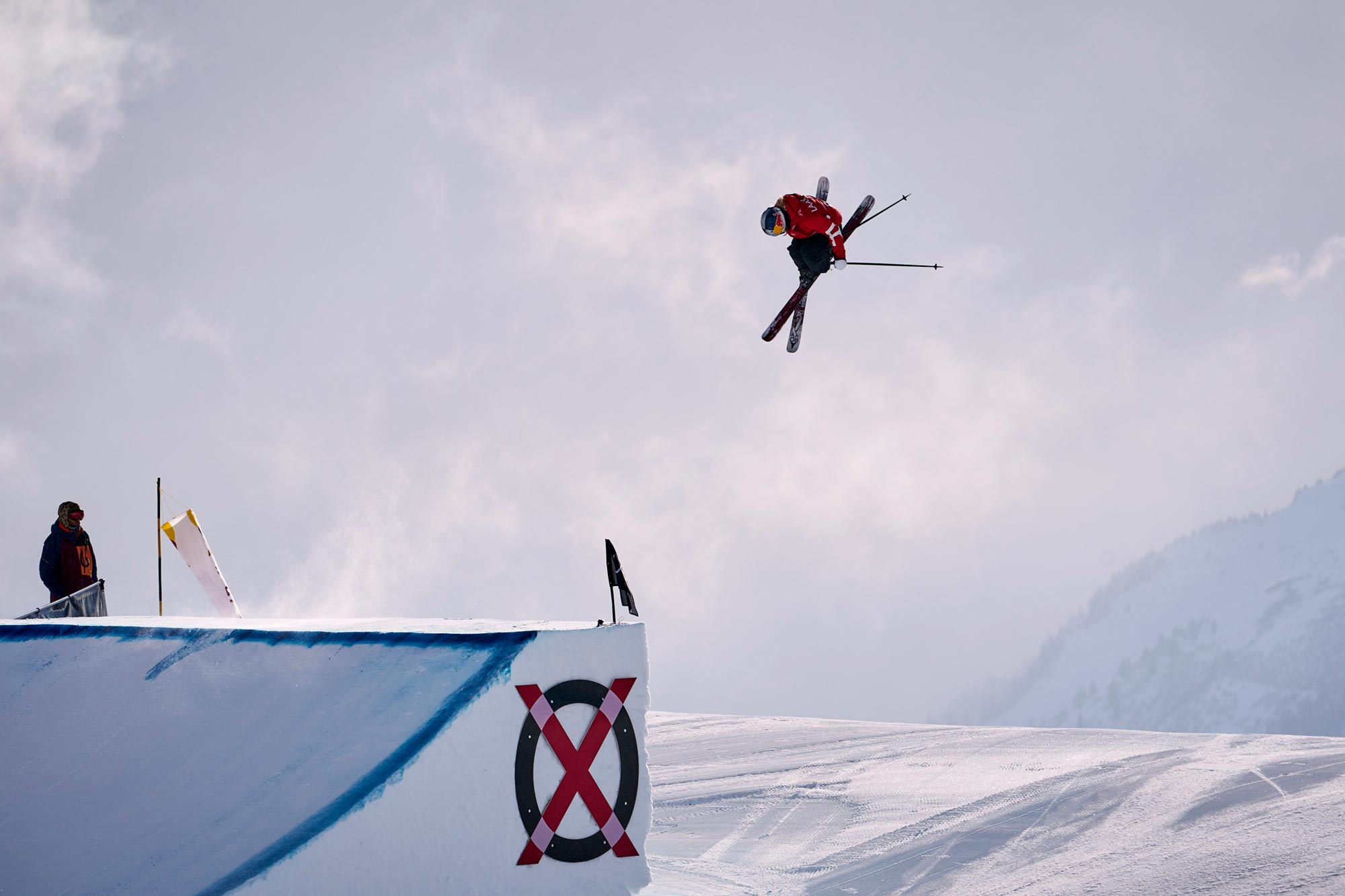 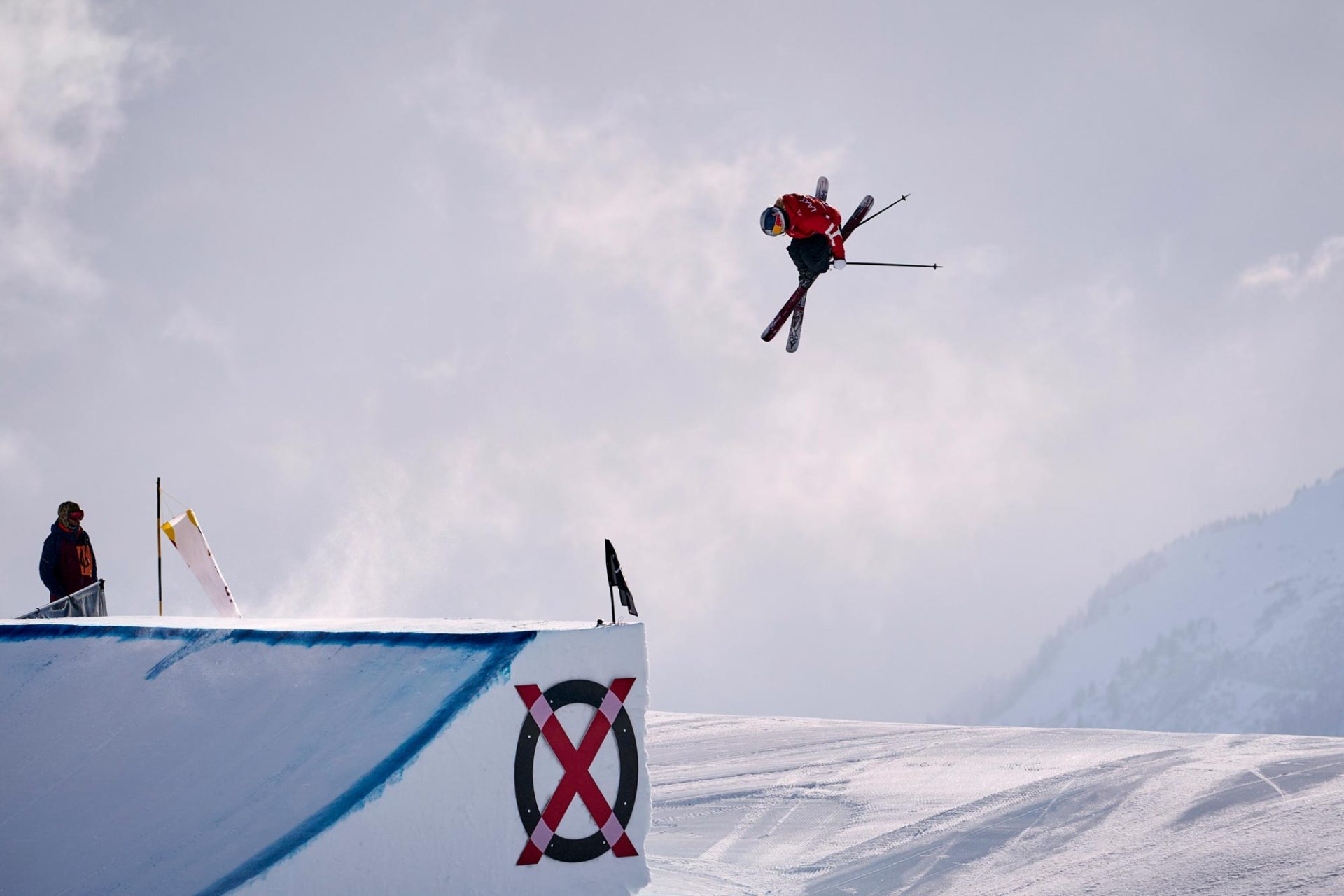 Third place went to the ever-consistent Tess Ledeux, whose first run of the contest back on Friday ended up being her podium run. Tess stuck to a safety run, which for her meant a k-fed, a back 450 out, a switch left 720 japan, a switch right 900 safety and a left 900 tail.

The lack of a women’s final meant we didn’t get to see fourth-place qualifier Mathilde Gremaud fight for a podium spot, nor a performance by up-and-comers like Grace Henderson and Kirsty Muir, who qualified in fifth and sixth respectively.

So concludes the first Laax Open to feature freeskiers. It was a bit of a rough start, but a start nonetheless to what we hope will become a long and honored tradition, just as the European Freeski Open used to be back in the day.