Alex Hall slid, tapped and air-pretzeled his way to a gold medal on Wednesday, February 16 as the 2022 Beijing Olympic men’s ski slopestyle finals rocked the slopes of the Zhangjiakou Genting Snow Park.

It was a day of bright sun, bitter cold, hard-fought triumph and bitter defeat on the immaculately sculpted Beijing slopestyle course—with a sprinkling of controversy, as always, added for extra flavor.

The ambitious Swiss duo, Andri Ragettli and Fabian Bösch, were among the day’s most disappointed competitors. Bösch landed his first run as perfectly as a slopestyle run has ever been landed with a front swap transfer to back 270 out, backflip on to switch, switch 270 on to misty 630 off the cannon rail, and a left double cork 16 tail, switch right double misty 12 mute and a rightside triple 1620 safety in the jumps. Despite perfect execution and the difficulty of his final unnatural triple, the judges weren’t impressed with the “stock” quality of the rest of Bösch’s run, and packed him into 6th place.

Ragettli, a motivated competitor if ever there was one, laced one of the day’s biggest rail transfers with a front swap, front 270 out, following with a switch left 450 on, continuing 270 and a switch right 270, pretzel 630 on the cannon rain. In the jumps, he linked a switch right double misty 12 mute, left double cork 16 (just missing the tail grab) and a switch left double misty 16 safety. His score of 83.5 on his second run landed him in fourth place, and he wasn’t able to deliver on a crucial third run to break onto the podium.

Another notable podium miss came from Colby Stevenson. The silver medalist in Big Air was widely regarded as the favorite entering this contest, but his usually catlike prowess was lacking on the slopestyle course today. Stevenson completed his first run with a switch 270 on, back 630 out of the roof rail and a powerhouse jump combo of an alley-oop left double flatspin 12 japan to reverse japan, switch left double 14 stale and switch right double 14 mute. But he bobbled the second jump landing a bit, scored in the mid 70s, and then made run-ending mistakes in his next two attempts.

Now to our medalists. For years now, Swedish freeski legend Jesper Tjäder has stood out for two reasons on contest courses: winning the hearts of the crowd with his unpredictable yet flawless antics, and being underscored by judges who are unimpressed with his “stuntsmanship.” But after years of criminally low scores, Tjäder received sweet, sweet redemption today at the Olympics. His first run did the trick: switch right tails 270 to switch, switch left 270 to pretzel 450, right 450 to backside 810, and a switch right double 14 mute, monster switch left triple 1260 japan and rightside double 1620 japan for a score of 85.35 and a bronze medal finish.

Already packing a bronze medal from Sochi 2014 and a silver medal from Pyeongchang 2018, Nick Goepper added yet another silver to his trophy case from Beijing 2022. The most tenacious competitor on the slopestyle course today, Goepper linked a switch left tails 270 to continuing 450, a big switch right 270 to back 630 off the roof rail, and a right 270 on to front 630 safety in the rails. In the jump line, he unleashed a switch right double misty 1260 mute, then carved into the side quarterpipe-style hit of the second jump—the only competitor to do so—with a rightside double cork 1440 tail, before finishing with a tweaked left double cork 1440 tail.

The gold medal, however, was reserved for Alex Hall, who only needed one run to win today’s contest. A-Hall chose the risky option of sliding the course’s longest, thinnest rails, lacing up a switch left 270 on, back swap, continuing 2 out and a switch right tails 270 to continuing 270 before nailing a double-tap cork 720 over the cannon rail—nose tap on the beginning of the rail, tail tap at the end. In the jumps, he served up a left double cork 16 japan, a playful switch left 720 to switch 540 japan on the roller option of the second jump, and added the cherry on top: the rightside double cork 1080, pretzeled back to a switch landing that only he can do. This extremely difficult trick hasn’t always been rewarded by judges as much as massive spin-to-wins (see: X Games Big Air), but for today at least, the judges were open to uniqueness and creativity—in other words, a setting ripe for a man of Alex Hall’s talents. 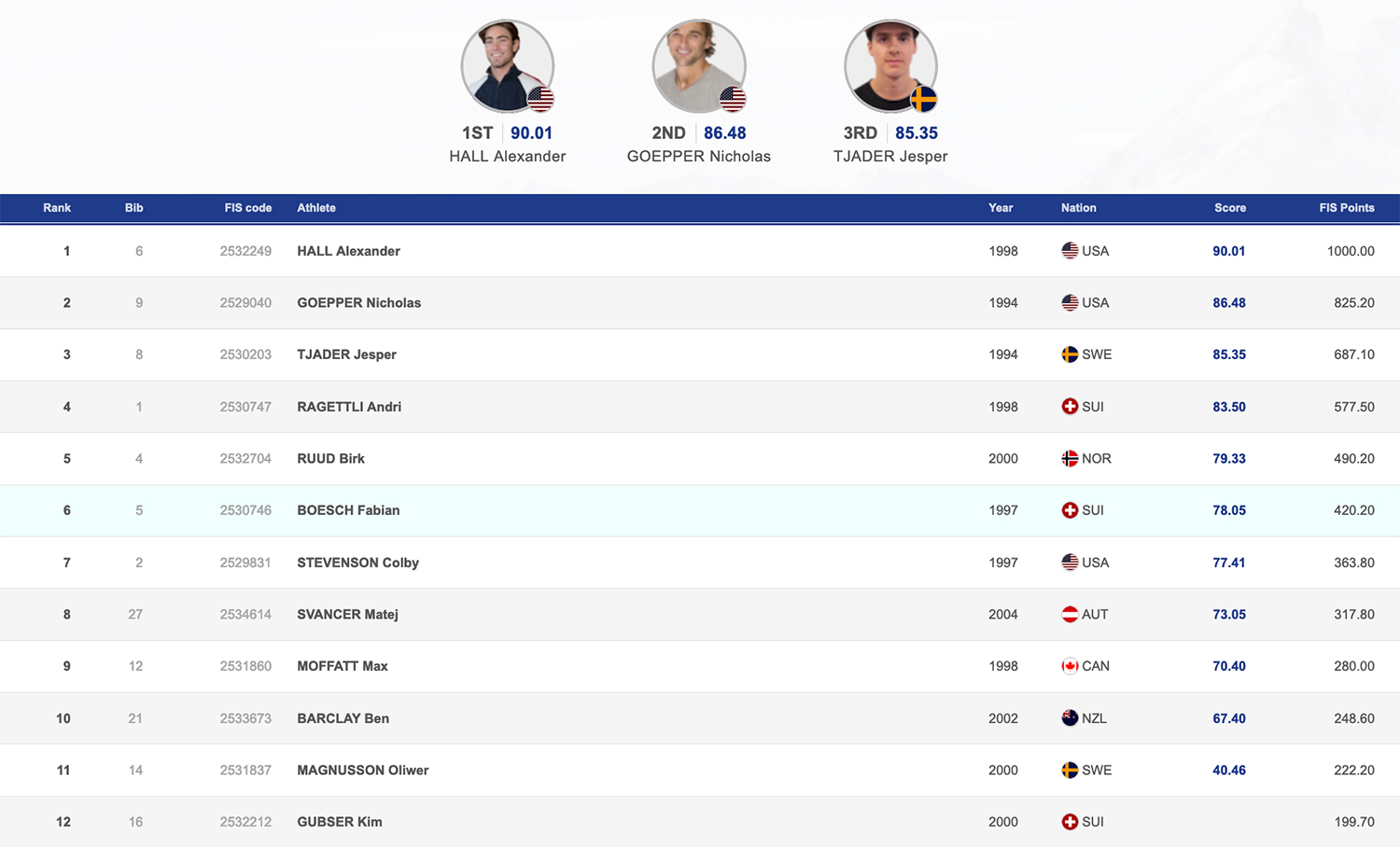 The sun may have been shining, but the thermometer read a brisk -24 degrees Celsius, making this one of the coldest competitions on record.

Oliwer Magnusson had one of the day’s more promising runs with a big backside 360 swap on the first rail transfer, but couldn’t put down a clean run, going 0/3.

Max Moffatt also struggled to put down a full pull, with a few crucial bobbles on his first rail transfer hampering his efforts. Still, his last-hit switch right double 1800 stale was one of the day’s biggest spins, and his cork 450 safety onto the second rail was a beautiful thing.

If anyone has a bone to pick with the judges, it’s Fabian Bösch. There was literally not a single mistake or hair out of place on Fabi’s first run. But his scores came in critically low on his first two rails, with the judges apparently deeming his front-swap transfer to back 270 as too stock, and his backflip on as too gimmicky.

Big Air phenomenon Matej Svancer showed he’s got slopestyle game as well by making these finals, and showed some of the more playful and enjoyable riding of the day. But he couldn’t convert for a serious challenge to the podium, despite smoothness in excess.

Kim Gubser landed one of the more jaw-dropping runs of the qualification round with a huge rail transfer and a switch triple to the bottom of the last jump. But he reportedly tore a muscle doing so, and missed out on the finals as a result.

New Zealand’s Ben Barclay crashed twice before completing a face-saving third run, although he still came up a bit short on his second jump. In his first Olympic appearance, he can be proud just to have made these finals and be counted among the world’s best slopestylers.

This contest was Colby Stevenson’s to lose, and lose it he did. After lacing a flawless switch 360 on to the second rail during qualis, Colby tried to step things up in finals by opting for the roof rail instead. He landed a mostly clean first run, but a bobble on the landing of his switch double 1800 stale and a low-scoring right 270 to switch on the first rail kept his score in the 70s, and he couldn’t deliver on the next two runs.

Alex Hall’s first run might not have won this contest on a different day with different judges. But today, the stars aligned and his creative approach was rewarded. In the end, it was probably his flawless execution on perilously long railslides and his cannon rail double-tap, as well as the much-deserving recognition of his rightside double 9 bringback, that sealed the deal.

Usually known for choosing more creative lines, Jesper Tjäder kept things remarkably “normal,” and the strategy paid off with a bronze medal. Although one can’t help but wonder, seeing how Alex Hall’s creativity paid off: Would Jesper have scored even better with a more Jesper-like run? Be that as it may, the Swedish star finally has a very big podium result to show for his many years on the contest grind.

No one in this contest is as driven or tenacious as Nick Goepper, as the American showed by racking up his third straight Oympic podium finish. He laced the daunting rooftop rail like no one else could, and made a risky choice of a side takeoff on the second jump that paid off in the end.

Big Air gold medalist Birk Ruud was in the running to double down on medals at this Olympics. But he crashed and bobbled his first two runs, and his completed third run was a bit too loose for the podium.

After recovering from a knee injury in record time and returning to win the X Games, Andri Ragettli was clearly shooting not just for the podium, but for Olympic gold. Alas, it was not to be. The top qualifier made small mistakes in his first two runs, and in a rare break of form, couldn’t deliver on a crucial third run.

What do pro skiers do during the summertime? Part 3

What do pro skiers do during the summertime? Part 3