Transparent in production, high quality in performance: the Lyngen Touring Shell Pro Jacket from MGG impresses from both ends of the spectrum. Photo: Klaus Polzer

Founded in 2019 in Verbier, MGG is one of the newest outerwear manufacturers on the market. While they haven’t been around so long, MGG have already distinguished their brand with a focus on superior quality and what they call “radical transparency” with regards to their social and ecological footprint. It helps, too, that they’ve enlisted current Freeride World Tour champion Maxime Chabloz and Ski Boss himself Tanner Hall to help market their wares to the masses.

I’ve been wearing the Lyngen Touring Shell Pro Jacket (€649 on mgg.ski) from MGG since last February. Let’s take a closer look at this new player, and what their gear can do. 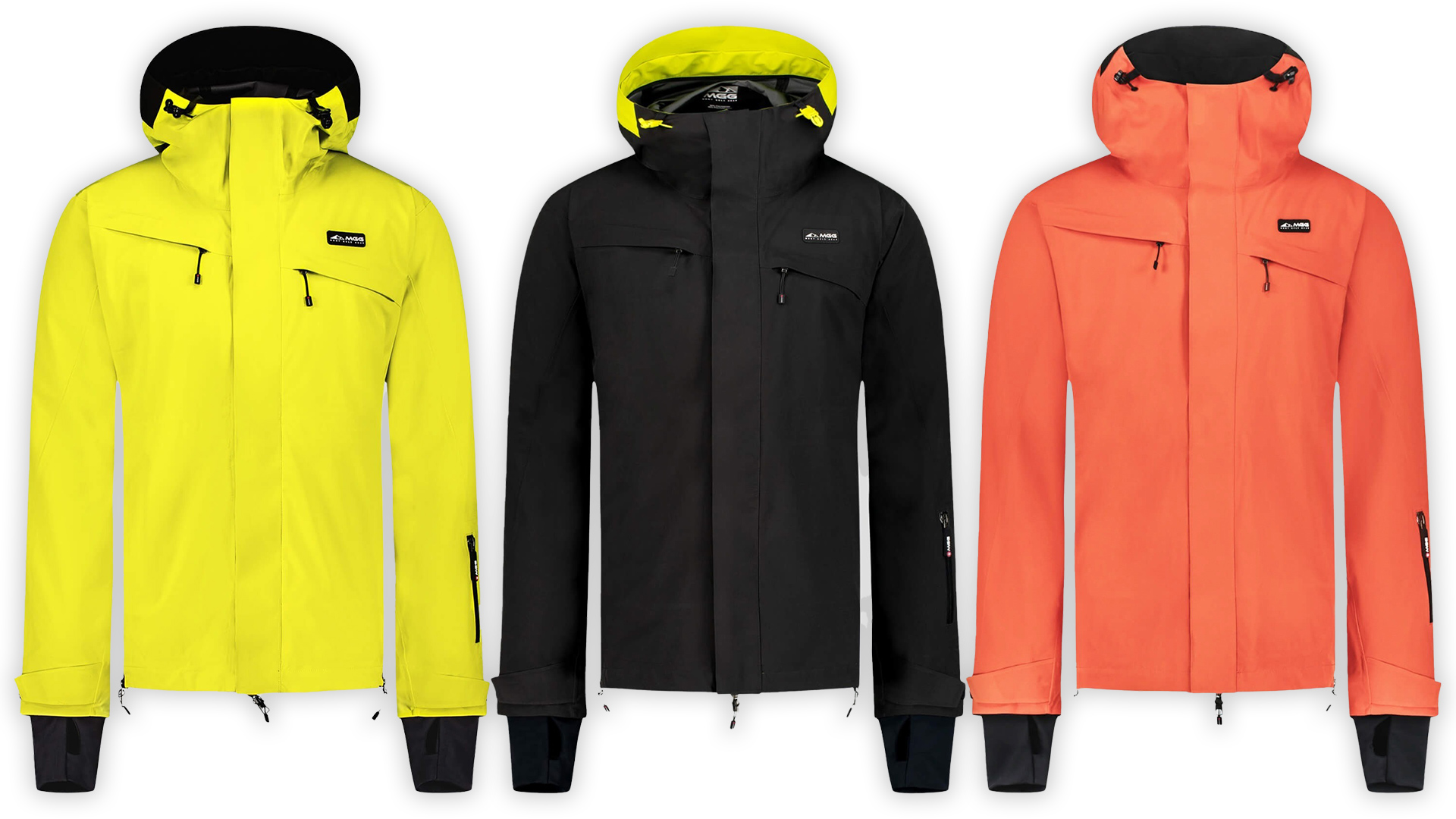 Let’s start with appearances. While some of the other jackets in MGG’s line-up might trend towards “Verbier chic,” the Lyngen is, visually, clearly a freeride kit. We are, after all, taking about a jacket that Tanner Hall is happy to wear on a daily basis. Although some of the colorways are a bit attention-grabbing (I’m looking at you, Lemon Yellow and Fire Orange), on the whole the Lyngen has an understated, no-nonsense look. The slanting chest pockets give the jacket a distinct look, while the lack of other external pockets (besides a ski-pass pocket on the sleeve) helps to keep things looking slick and unassuming. 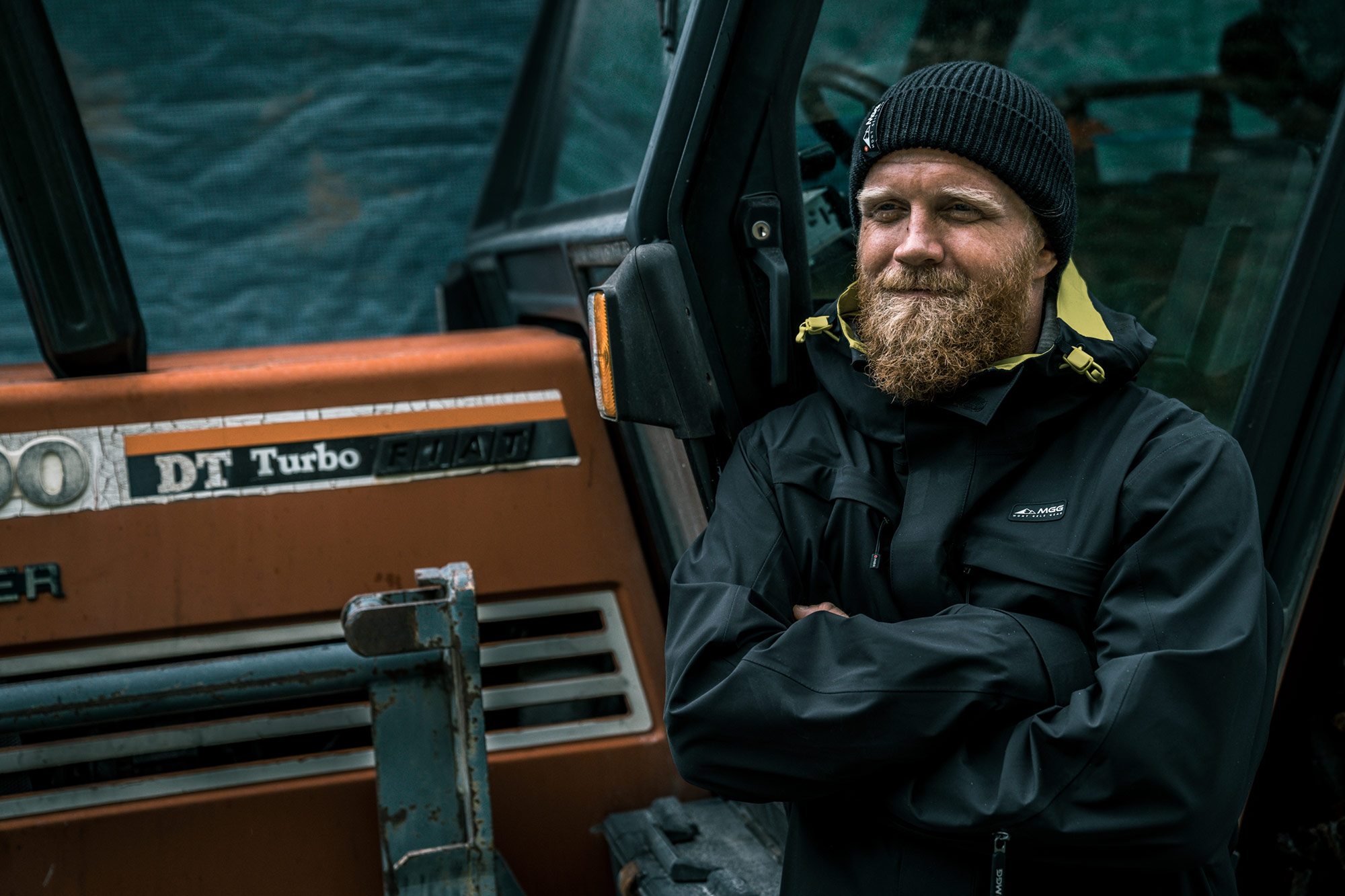 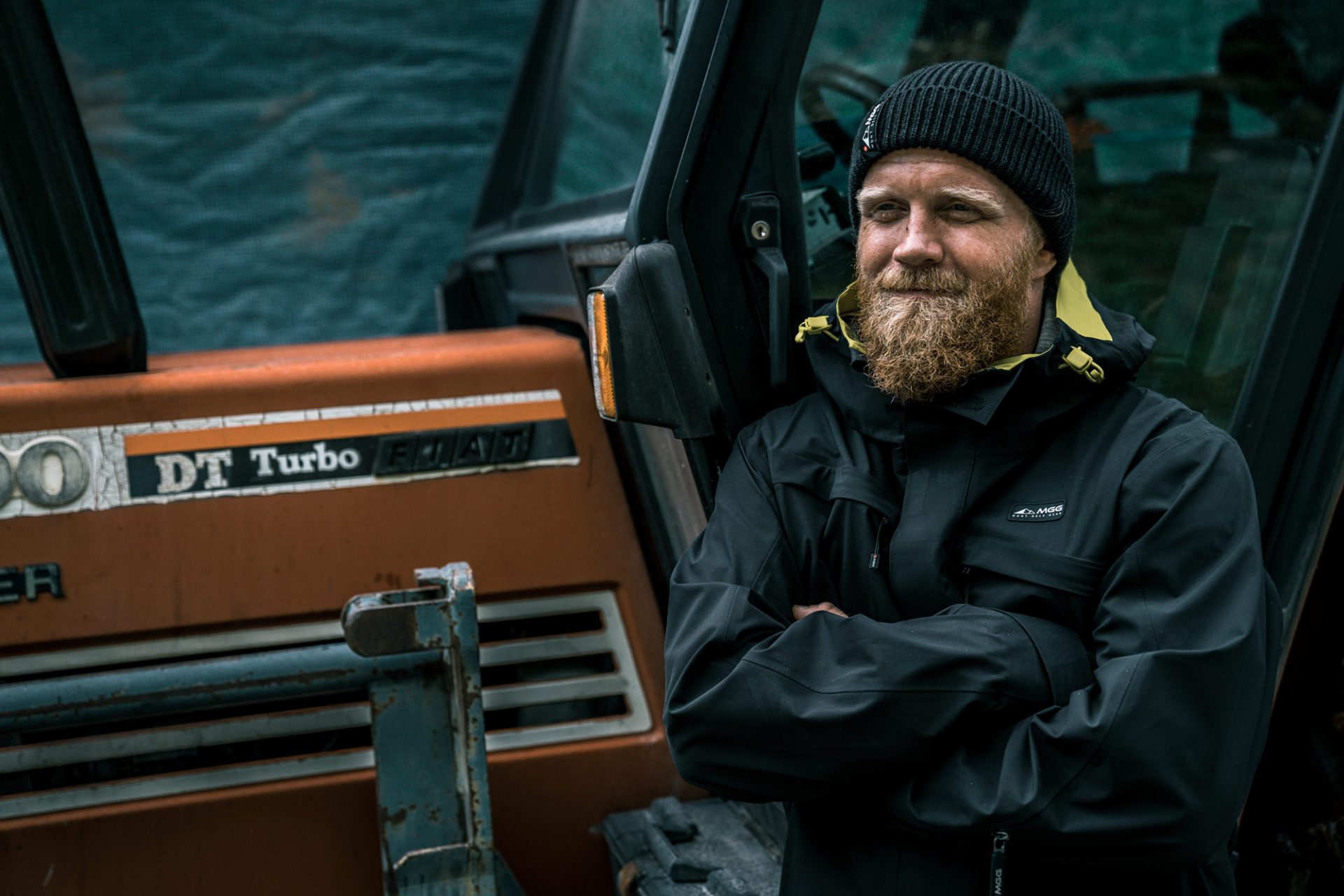 By now, we’ve all heard about the myriad advances in fabric technology over the past few years: new materials, new membranes, new waterproofing treatments. Thanks to these advancements, ski outerwear these days is lighter and more pliable, while providing the same or even better protection against the elements.

Even knowing that, it’s quite frankly a fairly mind-boggling experience to slip into the Lyngen jacket and know that it’s got a 20K waterproofing and 20K breathability rating. Back in the day, you’d need to wear a fabric that felt stiff to the touch—that literally crinkled whenever you moved—to get this kind of performance.

In comparison, the Pertex® Shield fabric that MGG uses in the Lyngen feels like wearing almost nothing. It’s incredibly light, weighing in at 740g, and even more than that, it is the very definition of supple: soft to the touch, wonderfully flexible and extremely comfortable. The fabric even has a bit of stretch to it, improving your freedom of movement—not that it’s necessary with a jacket this light and comfortable. After many years spent wearing the aforementioned crinkly jackets, donning the Lyngen feels like a breath of fresh air.

At 20K/20K and with a DWR (Durable Waterproof Repellent) treatment, the Lyngen will keep you dry in most weather conditions throughout the winter. Of course, it is still a lightweight touring jacket. So if you’re heading out into the gnarliest conditions, you’ll want something a bit more robust. And it’s a shell jacket, so insulation is your own business. Paired with a nice down mid-layer, you’ll be set to handle all but the most extreme cold. 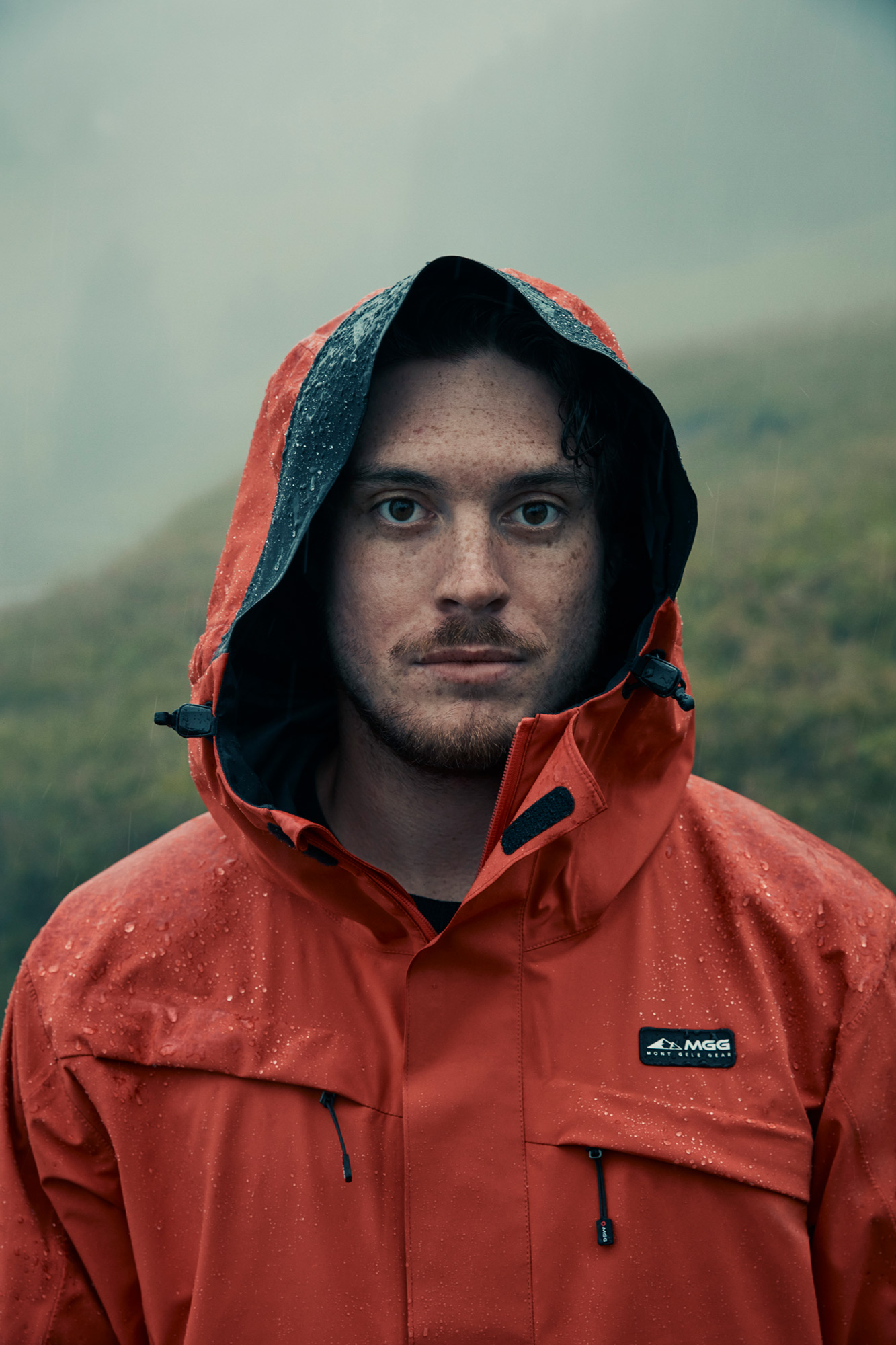 Despite its lightweight construction, the Lyngen can still be trusted to keep out the elements. Photo: Matt Holyoak

The Lyngen sports all of the features that a functional freeride/touring jacket should: helmet-compatible hood with drawcord adjustment system, wrist gaiters with thumb holes, velcro-adjustable wrist cuffs, fully taped seals, drawcord on the bottom hem. No big surprises here.

Instead of pit zips, the Lyngen features full-on flank venting: The jacket zips open from the armpit to the bottom hem on both sides. With zippers at top, bottom and middle, this allows for huge flexibility in venting. You can leave the zips a little bit open under the arms like a normal pit zip, open them all the way up, or anything in between. 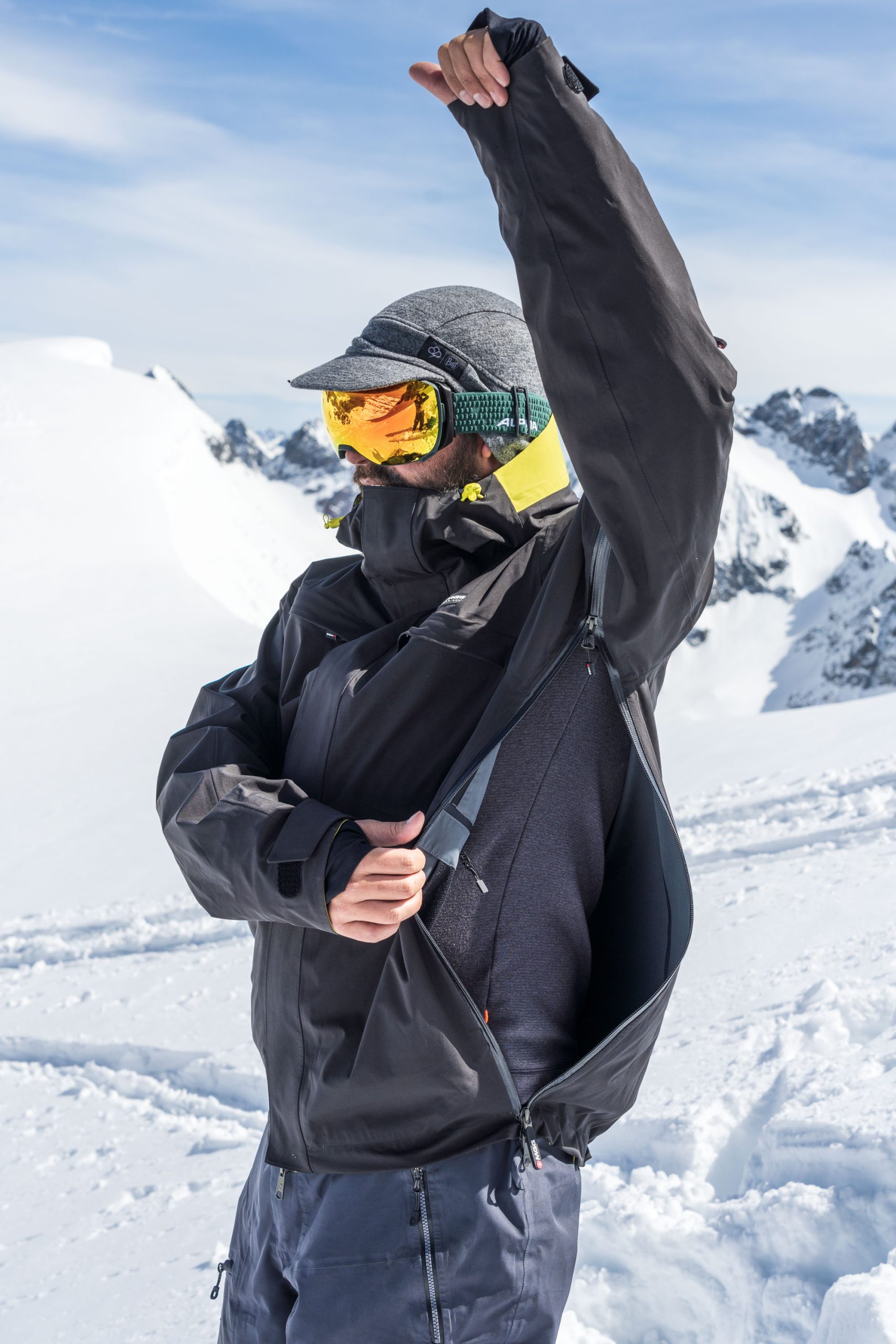 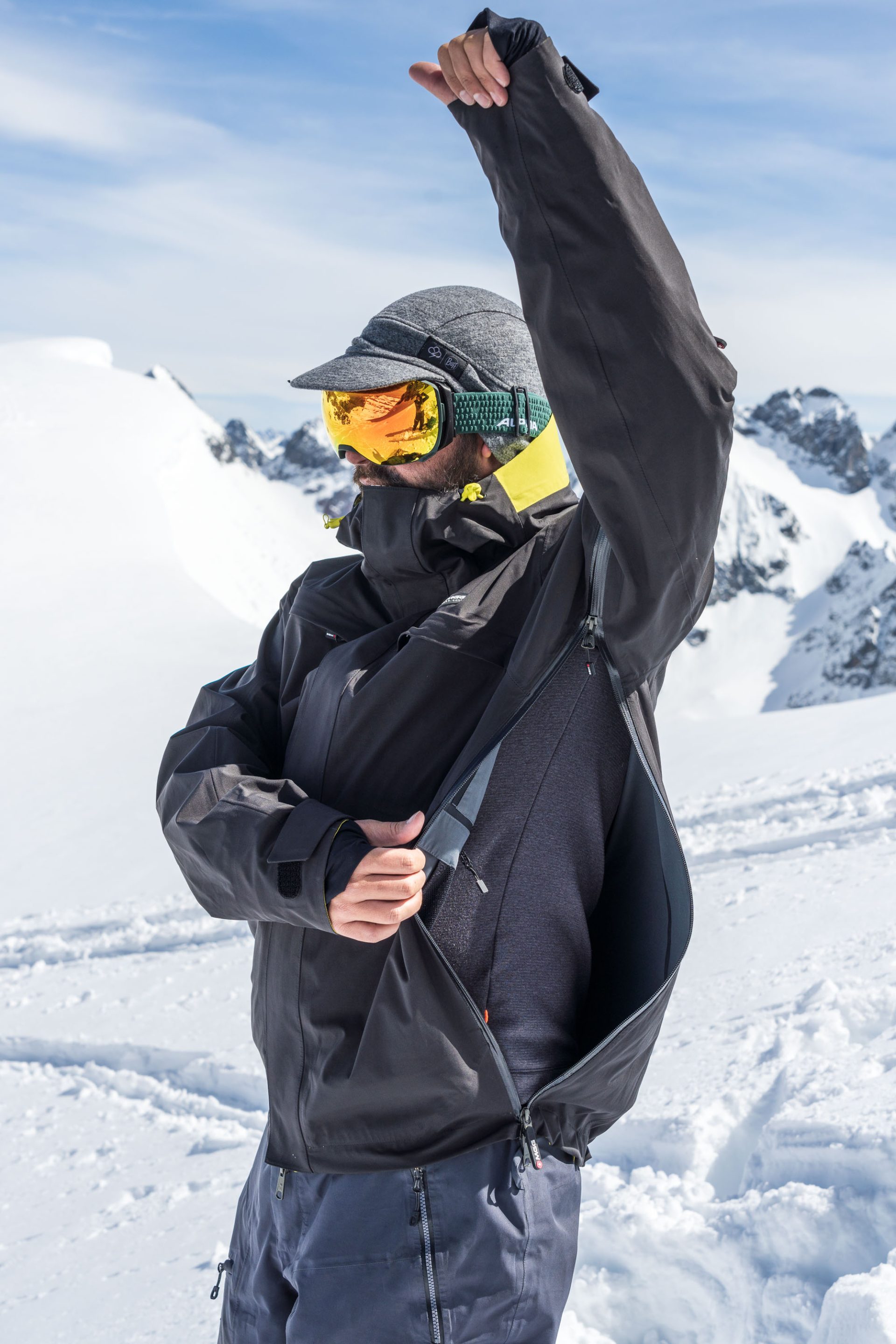 Need to vent? The Lyngen goes all the way. Photo: Polzer

This is where the Lyngen’s most unique design detail comes into play. Instead of two external pockets placed near the waist like most jackets, MGG has hidden these hand pockets inside of the side vents, on the inside of the jacket. In other words, you access the hand pockets via the flank zips.

This is a very cool concept. The zips on the flanks are doing double duty as both ventilation and as access points for the internal pockets. However, it’s also a flawed concept. If you’re opening the flank zips solely in order to get to the pockets, you’re venting air unnecessarily. If it’s freezing outside and you want to put your hands in your pockets to help stay warm, this is a self-defeating exercise. 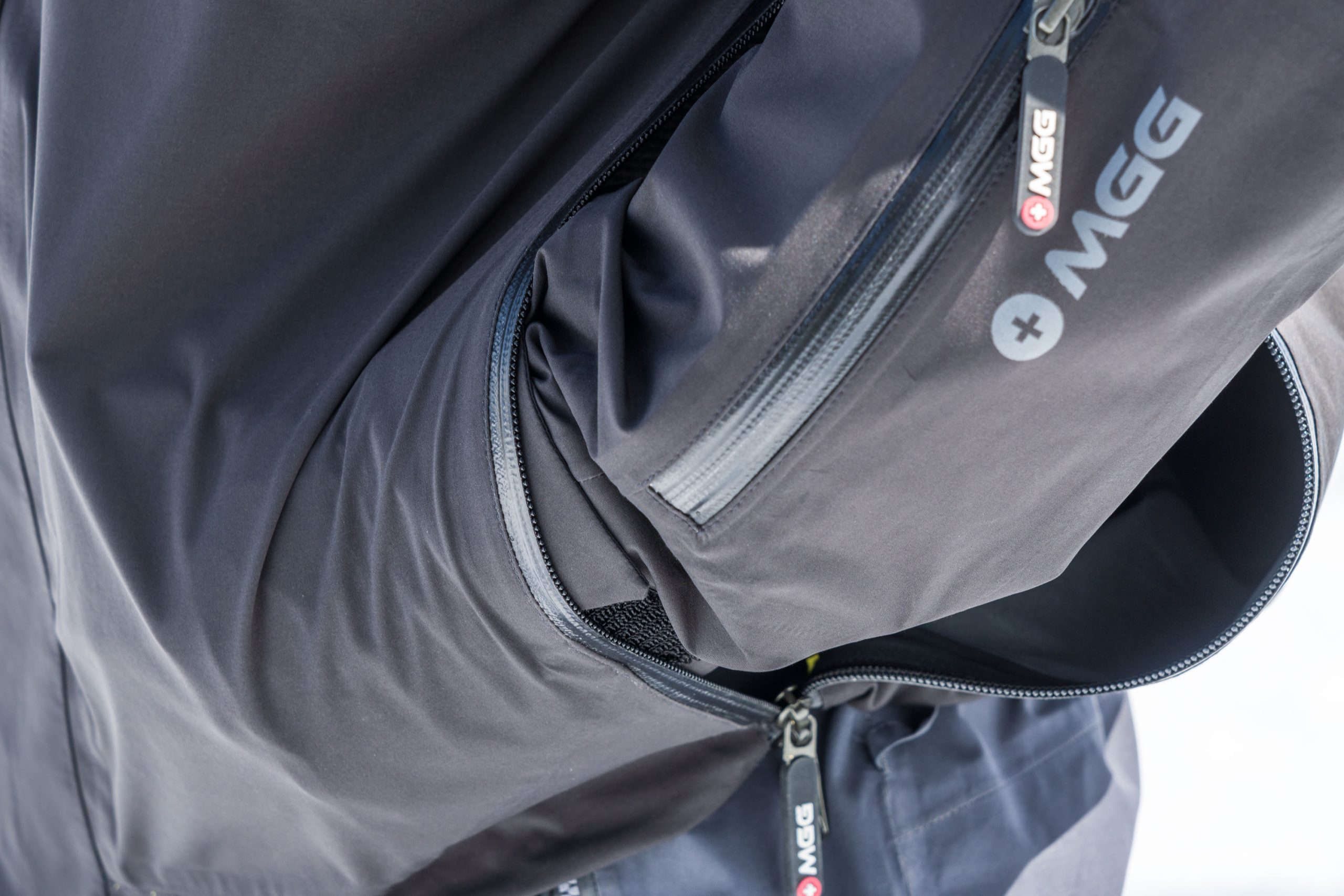 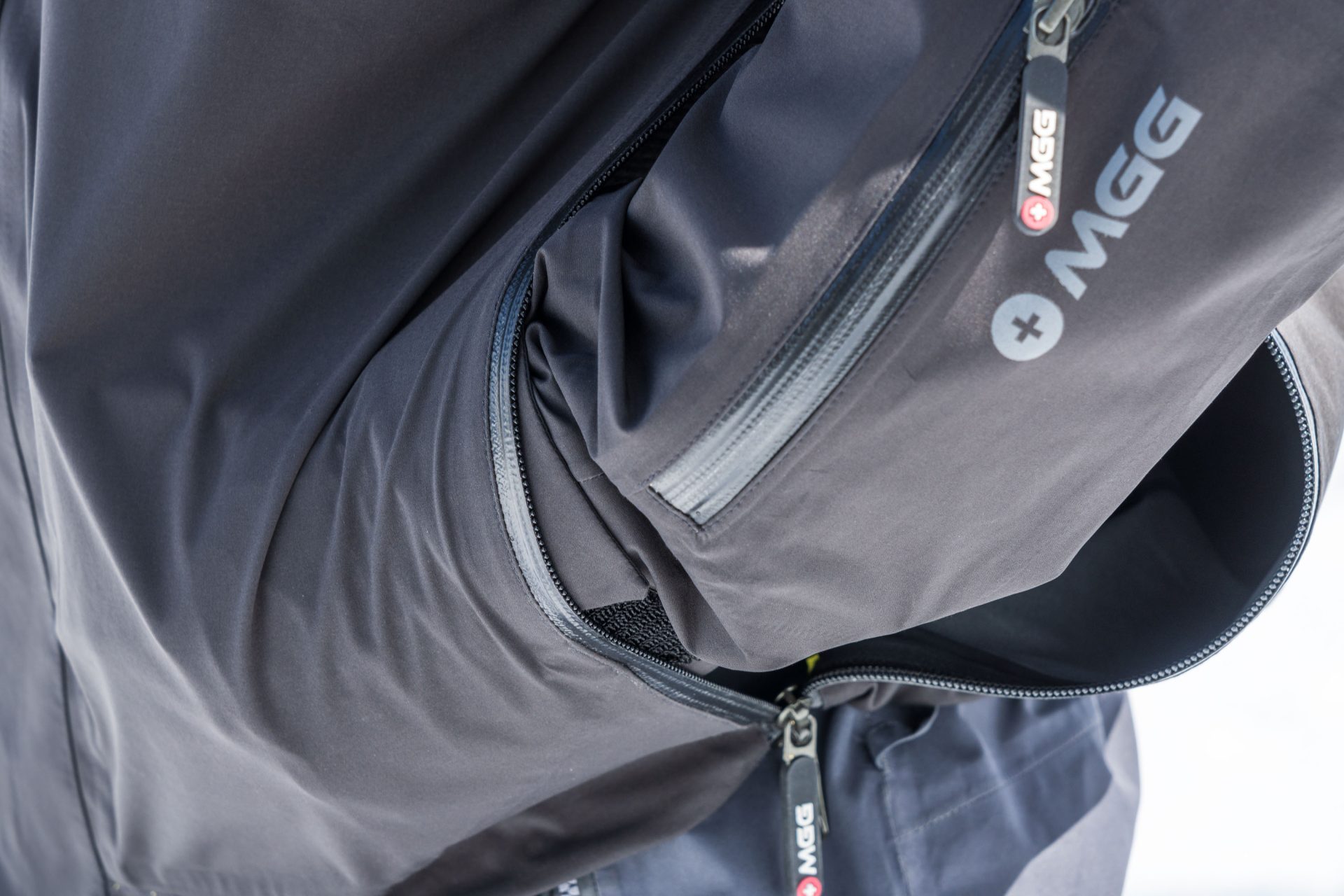 The Lyngen's waist pockets are only accessible via the flank zippers. It's a cool idea, but a flawed one. Photo: Polzer

My biggest gripe with the vent-accessible pockets, however, is that they don’t have their own zippers or even velcro to close the pockets themselves. You don’t want to put anything of importance in these pockets while actually skiing, because there is a very good chance that it will get jostled out. One day last spring I made the mistake of putting my car keys in one of these pockets, then spent half of an afternoon looking for them on the slope after they fell out during a run. (Luckily, they turned up at the lost and found.)

Don’t get me wrong: I really like the innovative approach with this style of pocket, and I think with some tweaks, it can be a very cool feature. But with two mostly impractical internal pockets, two chest pockets that are more fashionable than they are functional, and only one additional interior zippered pocket for valuables, the Lyngen leaves something to be desired in terms of pockets. 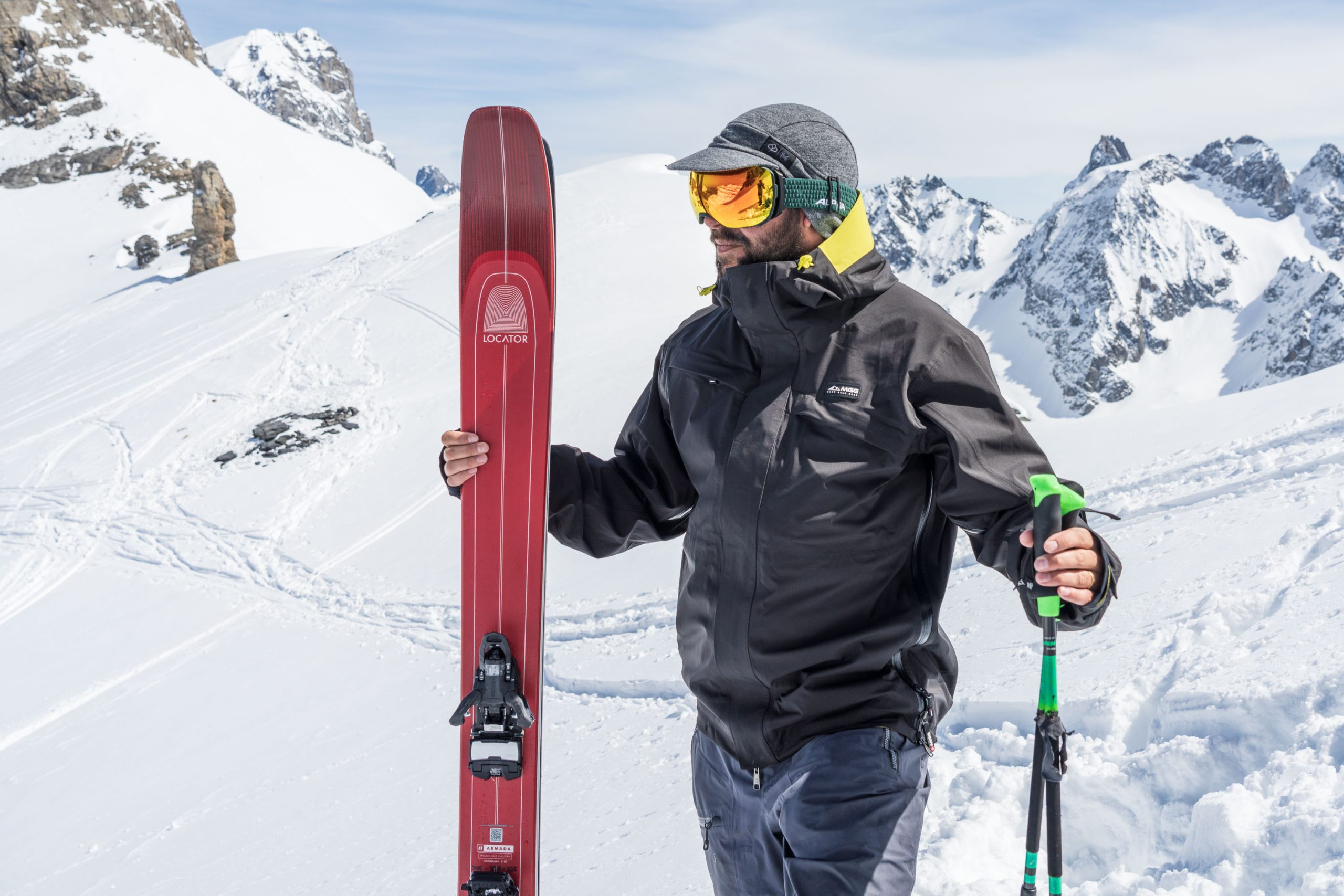 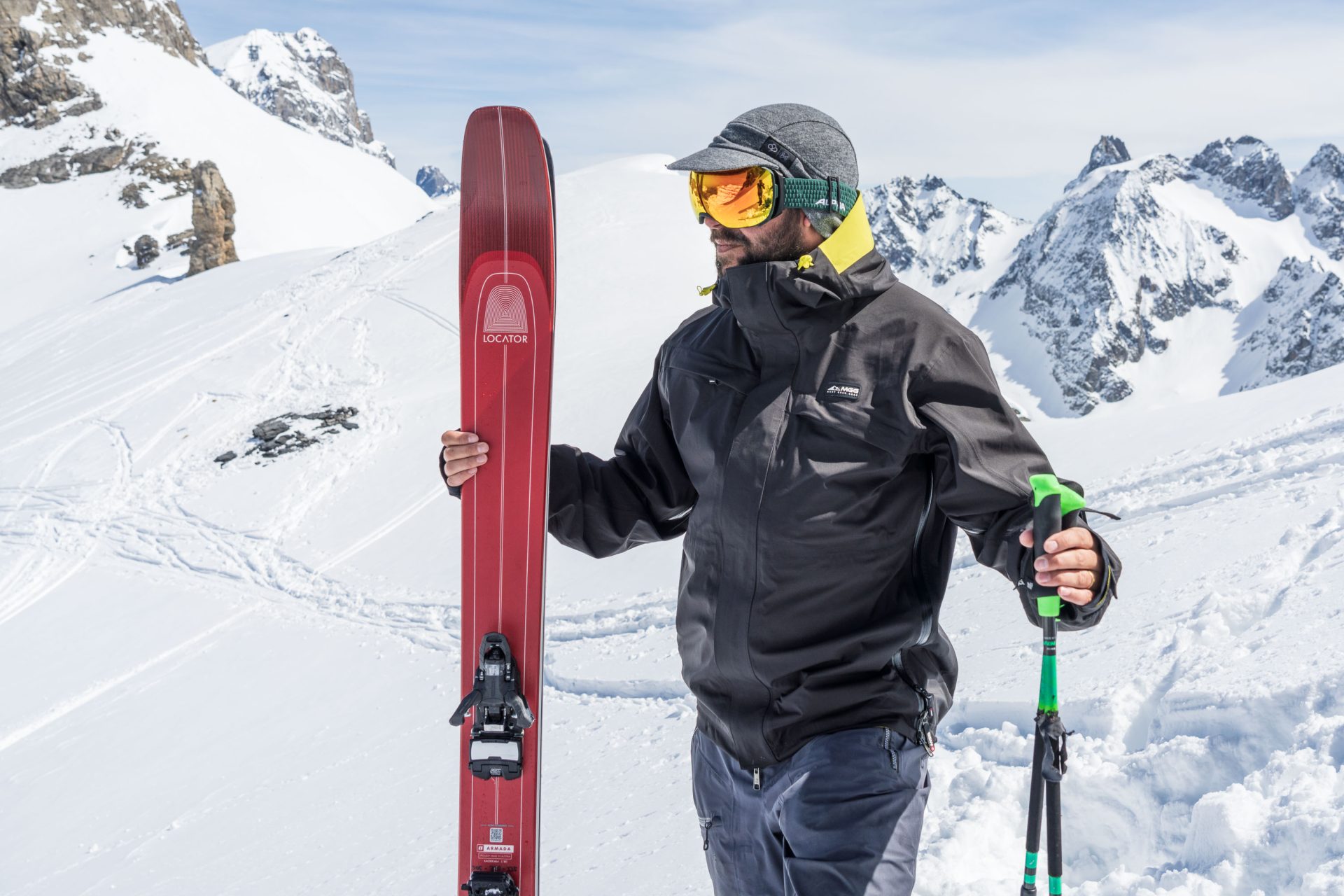 At its core, the Lyngen is exactly what it promises to be: an extremely lightweight and functional shell jacket that’ll keep you dry, from the outside and the inside, on your next freeride day or touring mission. After around 30 days on the mountain, my jacket has yet to show a single sign of wear, leading me to think it will be good to go for years to come. And in the Lyngen, MGG have also shown that they’ve got some interesting new ideas to bring to the table—even if, in my opinion, those ideas could still use a bit more development.

Last but not least, let’s talk sustainability. The Lyngen is manufactured in Europe (in Slovakia), and thanks to their “radical transparency” promise, MGG even declare the origin of all their materials. (The shell fabric comes from China, but almost everything else is sourced in Europe.) MGG even go so far as to publish their percentage price breakdown—how much money goes where in the company for each jacket sold— and calculates the carbon footprint of the jacket’s production (36.08kg CO2).

MGG’s Snow Report goes into even more extensive detail about the company’s operations, from the sourcing of their materials to the working conditions in their factories. If knowing where your gear comes from and how it’s made is a top priority for you, look no further. Radical transparency is one place where MGG is clearly holding to its promise.

KROM WARS is back for its 2019 Edition

KROM WARS is back for its 2019 Edition