Eileen Gu's back to back 900s helped her secure her second major halfpipe victory this season. All photos courtesy of the U.S. Freeski Team.

On Friday, March 12, eight women and ten men vied for the title of Halfpipe World Champion at the 2021 FIS Freestyle World Championships finals in Aspen, Colorado.

The World Champs are a FIS contest that takes place every two years; the last one was held in Park City, Utah in 2019. This year’s Big Air, Halfpipe and Slopestyle events were originally planned in China as test events for the upcoming 2022 Beijing Olympics. After their cancellation due the pandemic, the contests were briefly slotted for relocation to Calgary, Canada, before finally ending up in Aspen, Colorado—making this the first time that the World Champs have been held back-to-back in the same country.

Women: Gu has the goods

In the women’s contest, favorite Ailing a.k.a. Eileen Gu (depending if you want to use her English name, or her more recent Chinese appellation after she became a naturalized Chinese citizen in 2019) jumped to an early lead in the first run. With back-to-back cork 900 japans in both directions and proper amplitude and grabs on all of her hits, the 17-year-old star quickly established herself as the girl to beat in this contest. It didn’t hurt that her main competition—Canada’s Cassie Sharpe and Estonia’s Kelly Sildaru—were both absent due to injury. 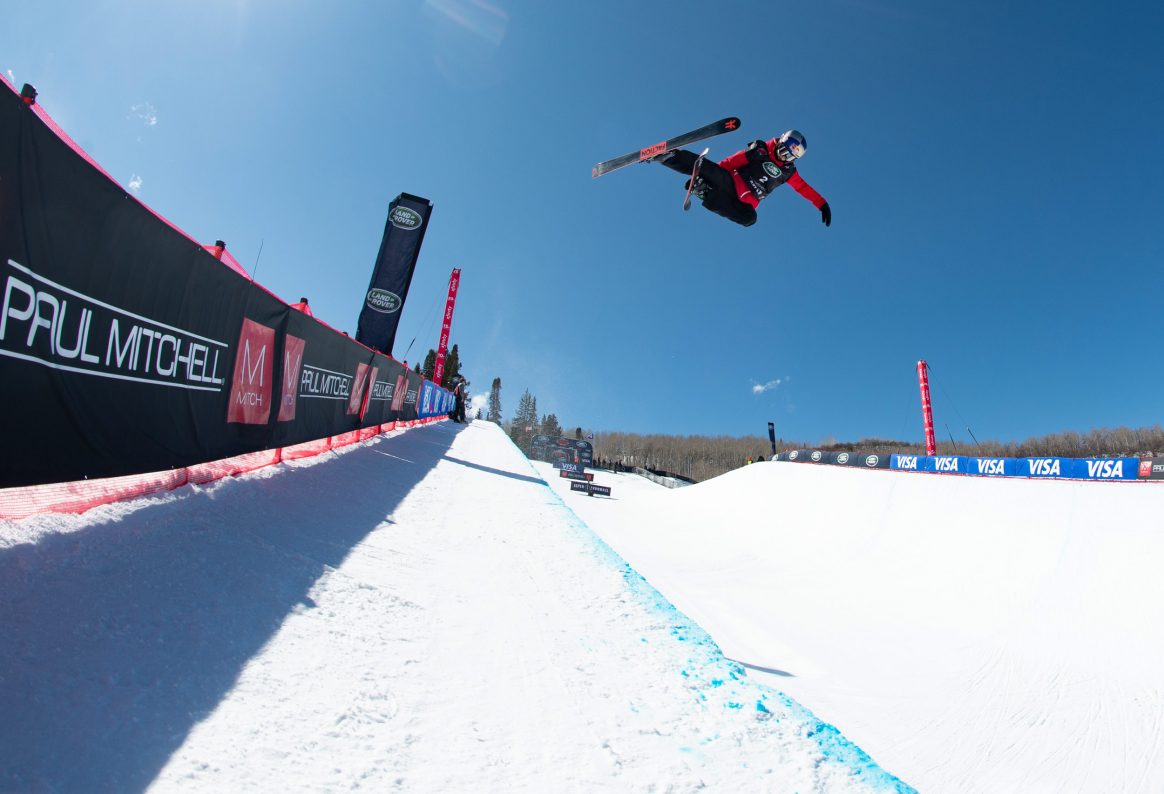 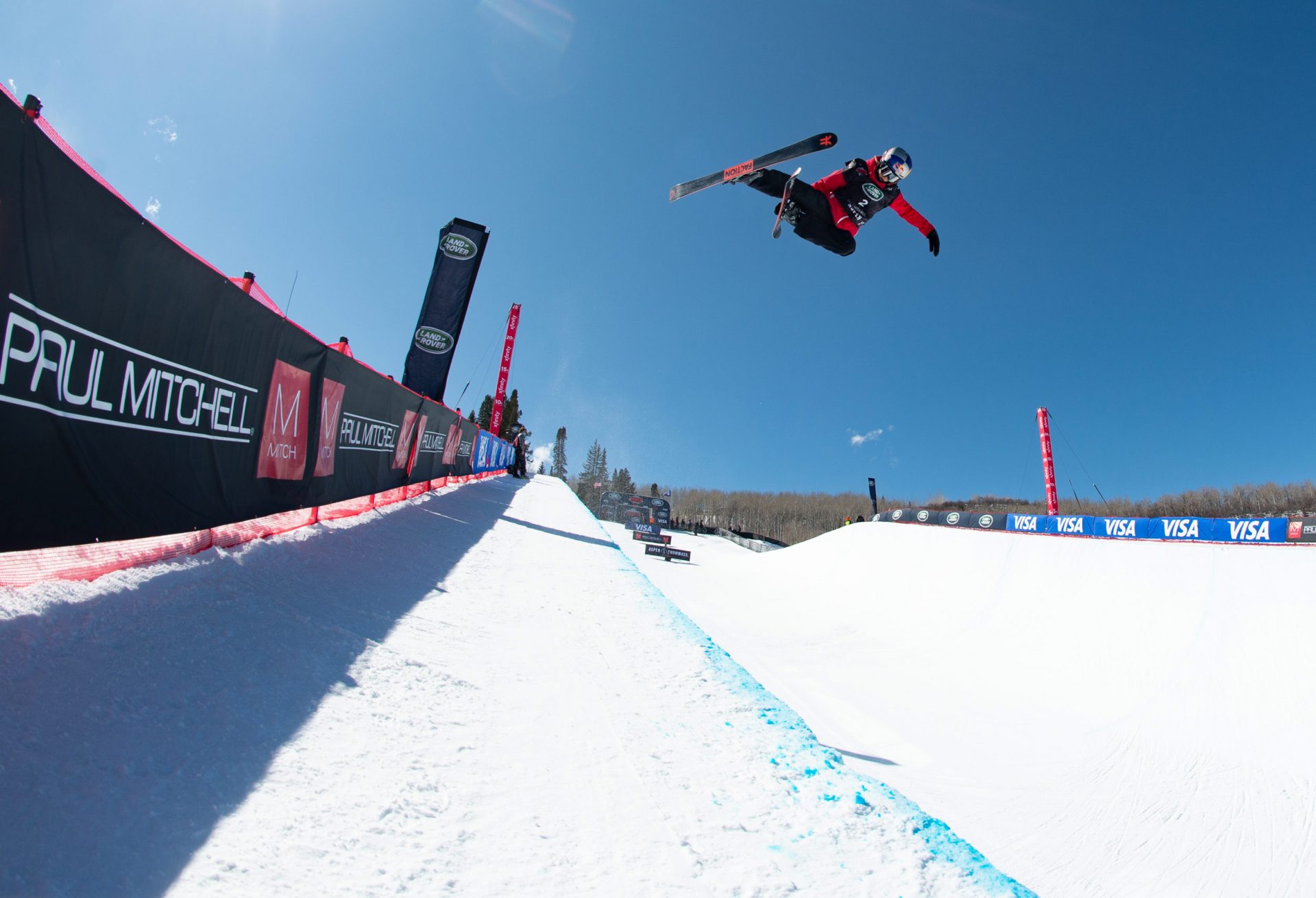 Skiing without poles due to a hand injury, Eileen Gu had no problem rising to the top of the pack.

Despite Gu’s clear dominance, American rookie Hanna Faulhaber made a solid impression with huge amplitude and clean style on her first hit, a straight air tail grab, following it up with a big leftside 720 and flairs in both directions. With some more polish and a few more tricks in her bag, like 900s and improved switch skiing, the 16-year-old should be a clear podium threat in the future.

American veteran Brita Sigourney’s amplitude was also on point, while top qualifier Rachael Karker crashed on a rightside 900 attempt, opening up the possibility of an upset. After the first run, Gu led the field, followed by Sigourney in second and Faulhaber in third. 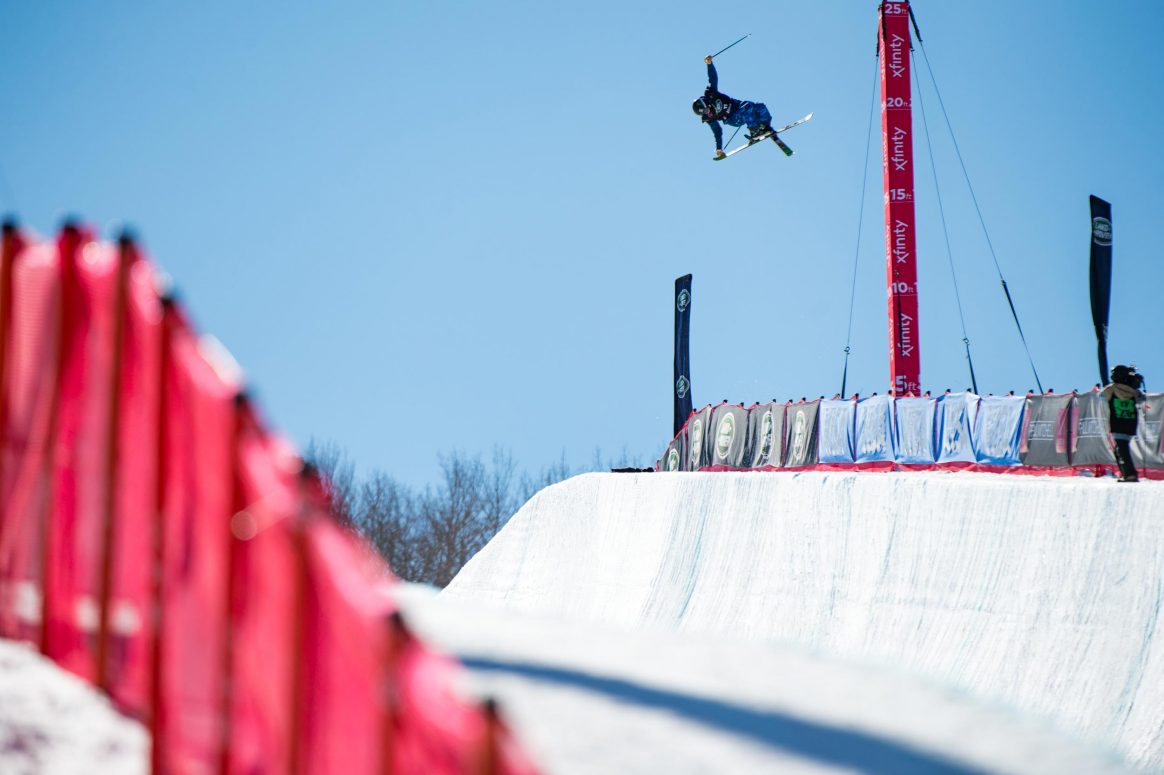 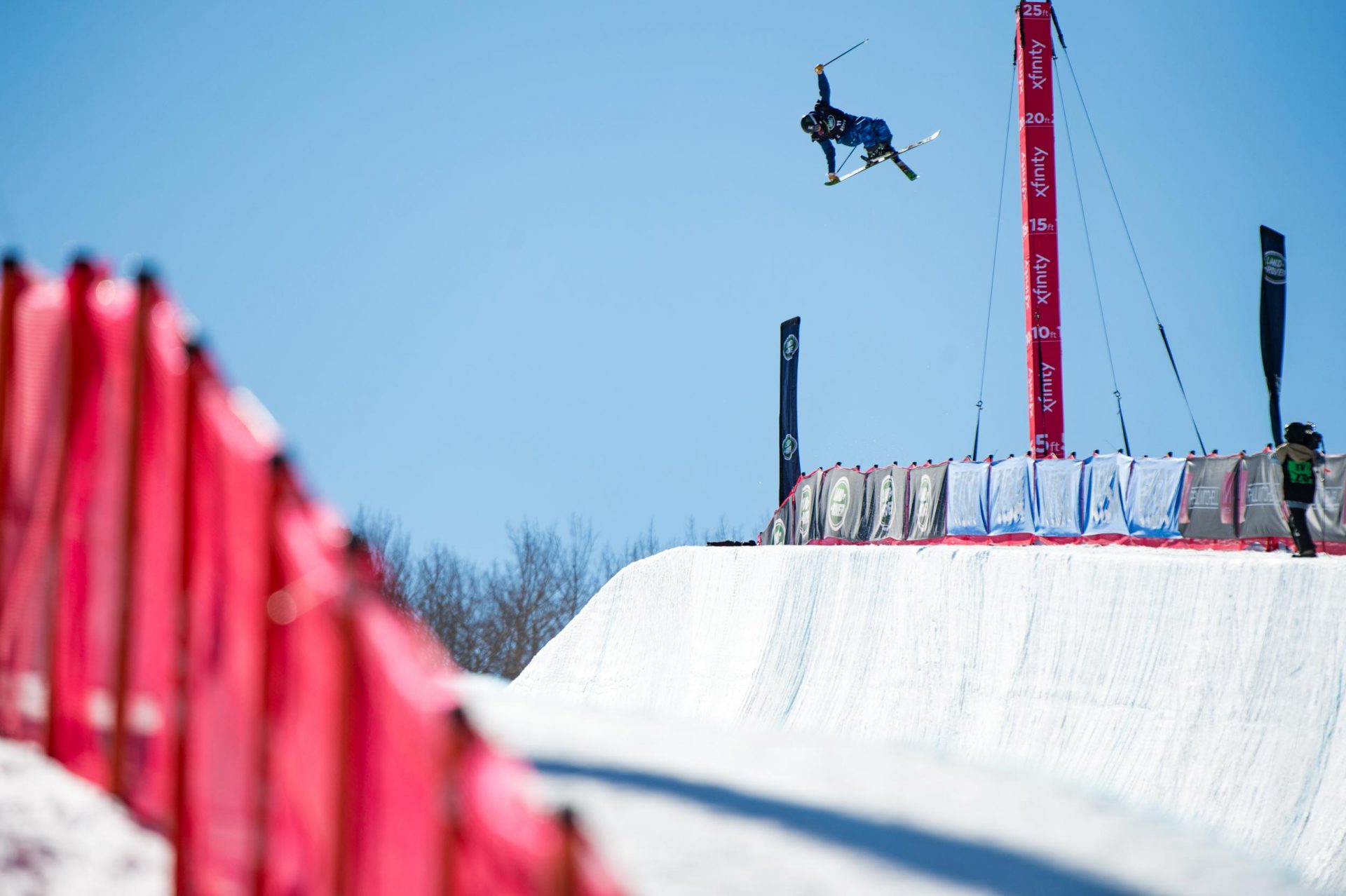 Hanna Faulhaber turned heads with her massive amplitude. Keep an eye out for this hungry rookie.

In the second run, 18-year-old Zoe Atkin of Great Britain shook up the standings, stomping her run full of cleanly-grabbed spins to move into second place. Karker, meanwhile, was able to put down her run with back-to-back 900s, albeit a bit loose, to slip into third place.

With Gu comfortably ensconced in the lead—and landing three clean runs to prove she deserved it—the third run turned into a battle between Zoe Atkin and Rachael Karker for second and third place. Atkin landed her run again, grabbing every trick with style, to improve her score slightly. But on her last run of the day, Karker was able to deliver with 900s and flairs in both directions, and a 720 into a switch 540 for good measure, to edge past Atkin for the silver medal. 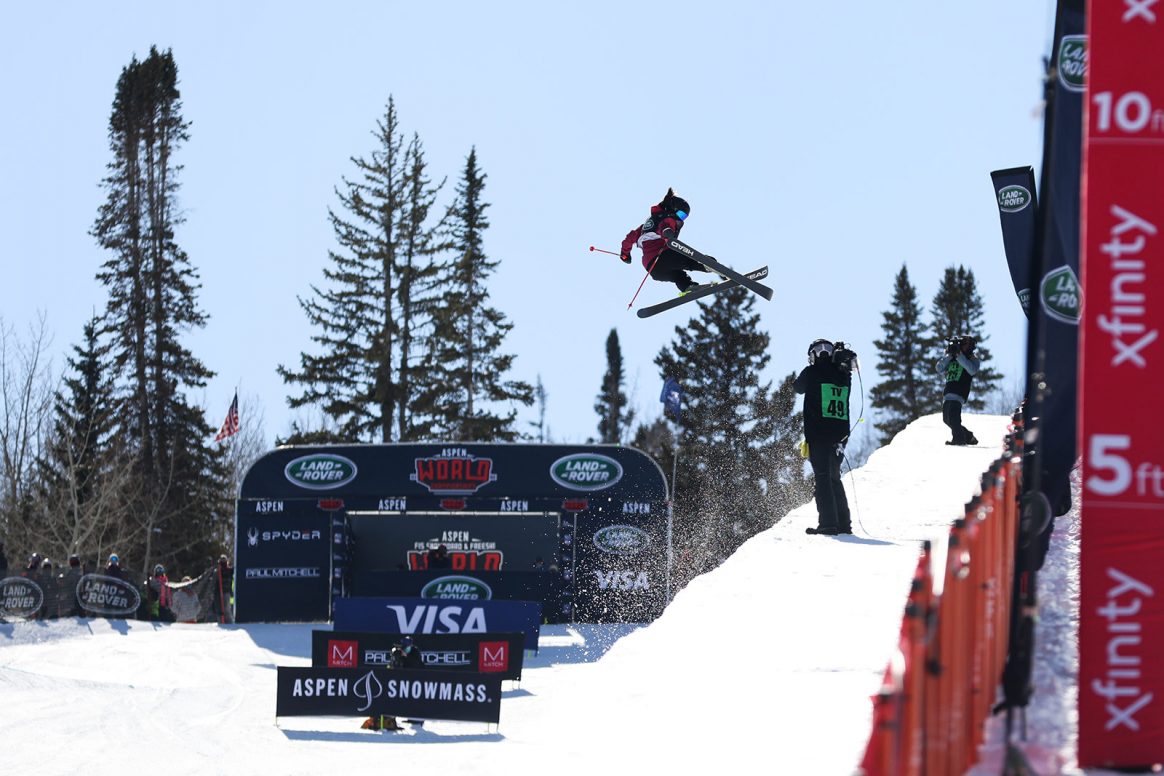 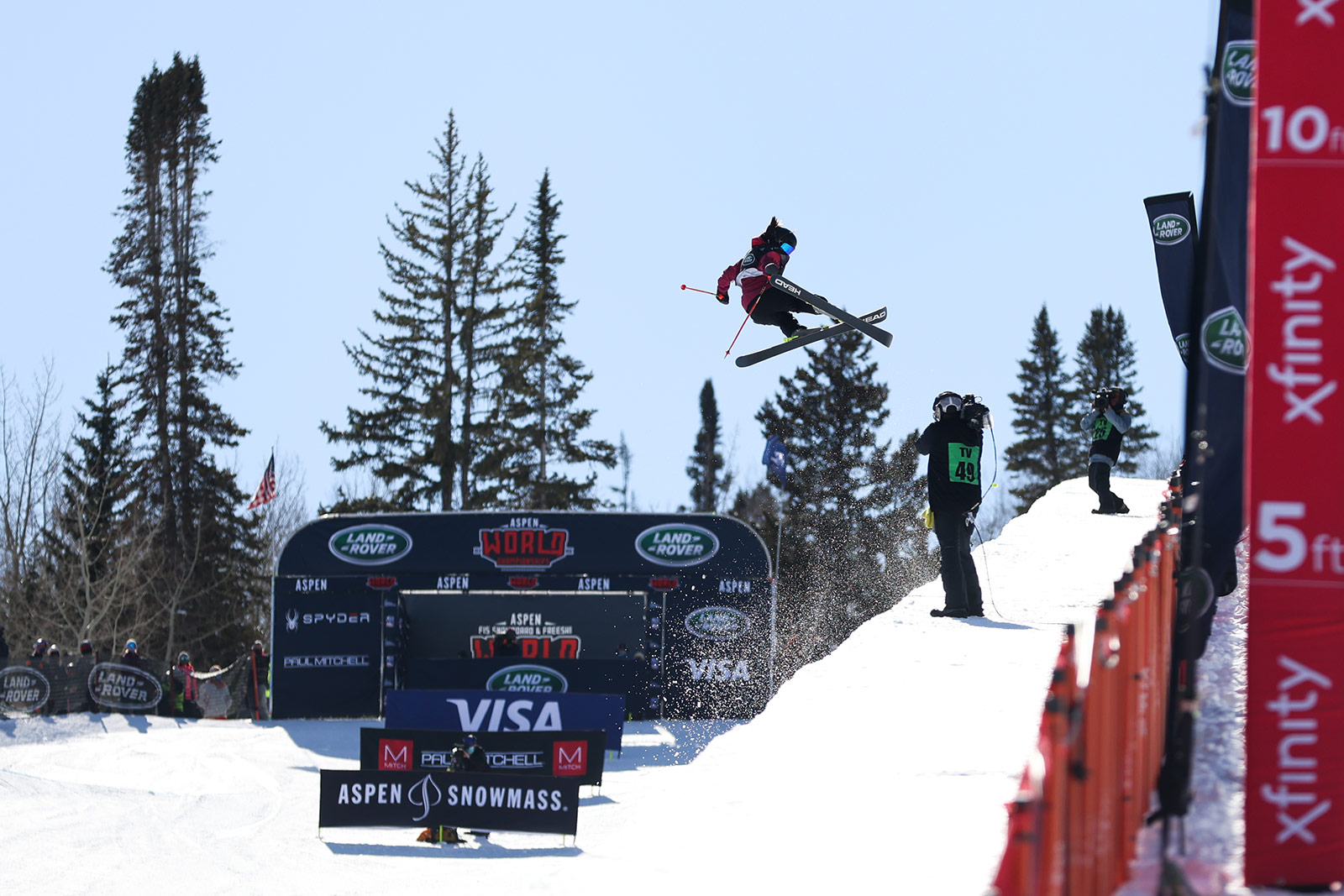 GB's Zoe Atkin was the most consistent and creative grabber in the field.

The final result: Gu in first, Karker in second and Atkin rounding out the podium in third. Faulhaber, Sigourney and their American colleague Devin Logan followed, with Russia’s Valeriya Demidova and Japan’s Saori Suzuki trailing the pack. (Click here for the official results from FIS.) 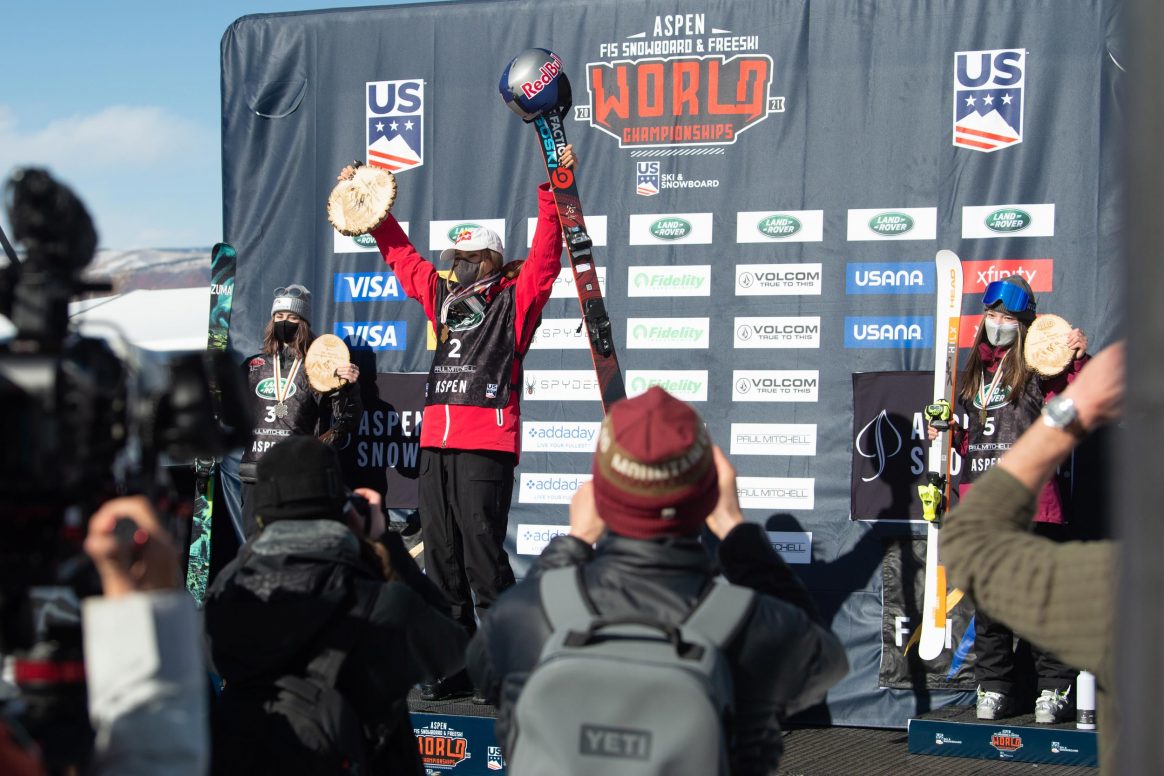 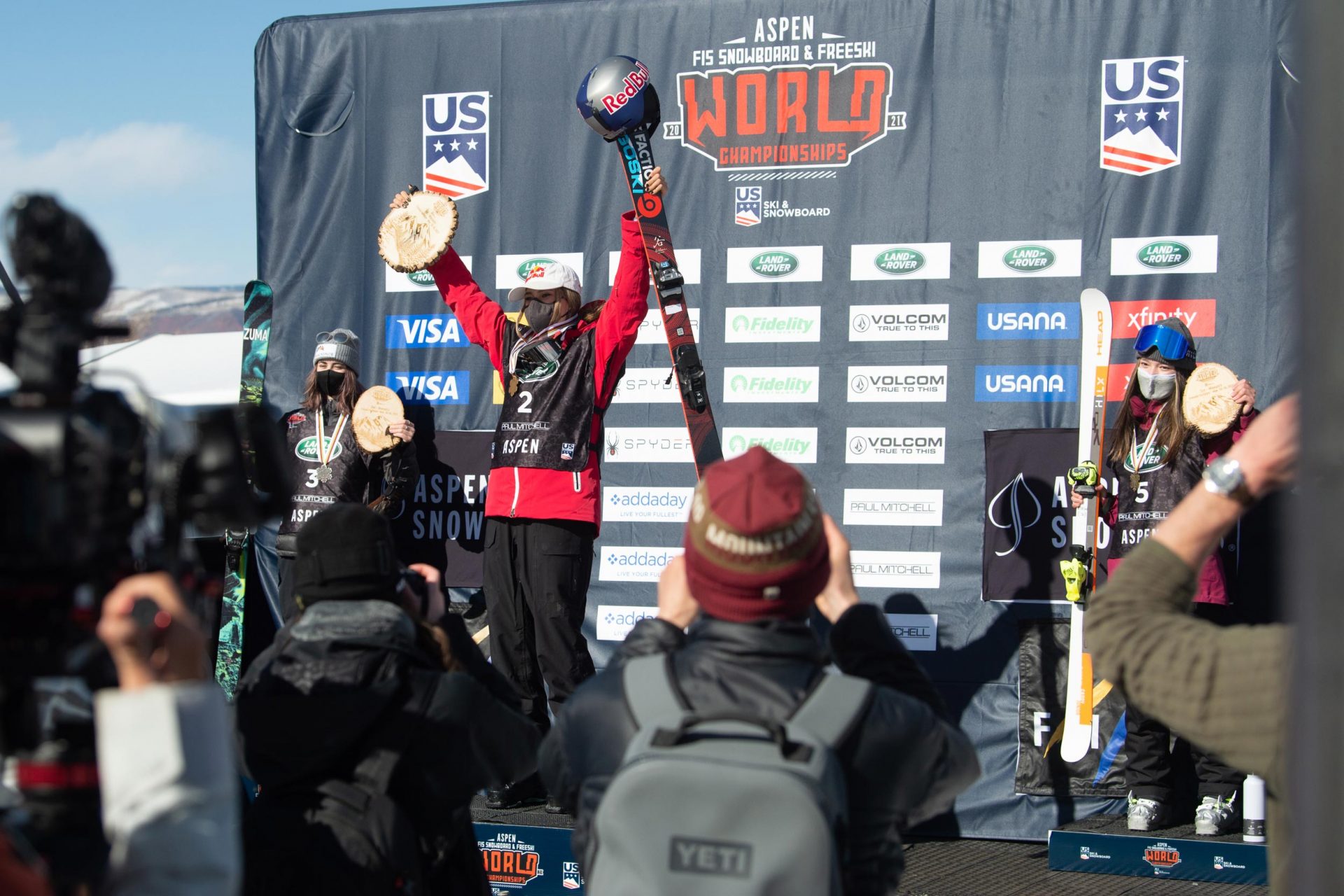 Men: Porteous Spins for the win

Unlike the women, the men’s contest got off to a rocky start, with four of the first five competitors falling on their runs. Alex Ferreira, Kevin Rolland, David Wise and Simon D’Artois all went down in quick succession; the highlight crash went to halfpipe legend Rolland, who lost control during a massive rightside double cork 12, body-slammed the coping and tumbled ass over teakettle into the bottom of the pipe. Somehow, this beast of a man was able to stand up and ski away from what was definitely the day’s gnarliest crash.

After the bumpy start, it fell to reigning world champ Aaron Blunck to put down a run. Blunck stomped his standard routine with doubles in all four directions, including his signature switch left double cork 900 japan, to clinch an early lead. It was a lead he held for all of about two minutes, because the next rider up, New Zealand’s Nico Porteous—fresh off an X Games win six weeks ago—stomped his own monster run. Porteous’ run may have lacked a switch right double, but he more than made up for it with back-to-back double cork 1620s—a trick no other competitor in the field is doing in one direction, much less in both. Even though he checked the coping a bit on his final hit, Porteous vaulted into first with a massive score of 94.5.

The smoothest pipe operator in the game, Canada’s Noah Bowman was looking sharp on a safety run until he hip-checked the wall on his last hit, a rightside cork 12—he was one of many competitors who seemed to struggle with the left wall of the pipe, which looked to be undervert. Closing out the first run, 21-year-old American Birk Irving put down a big run highlighted by a right double 12 into a left double 14 to slide into second place behind Porteous. 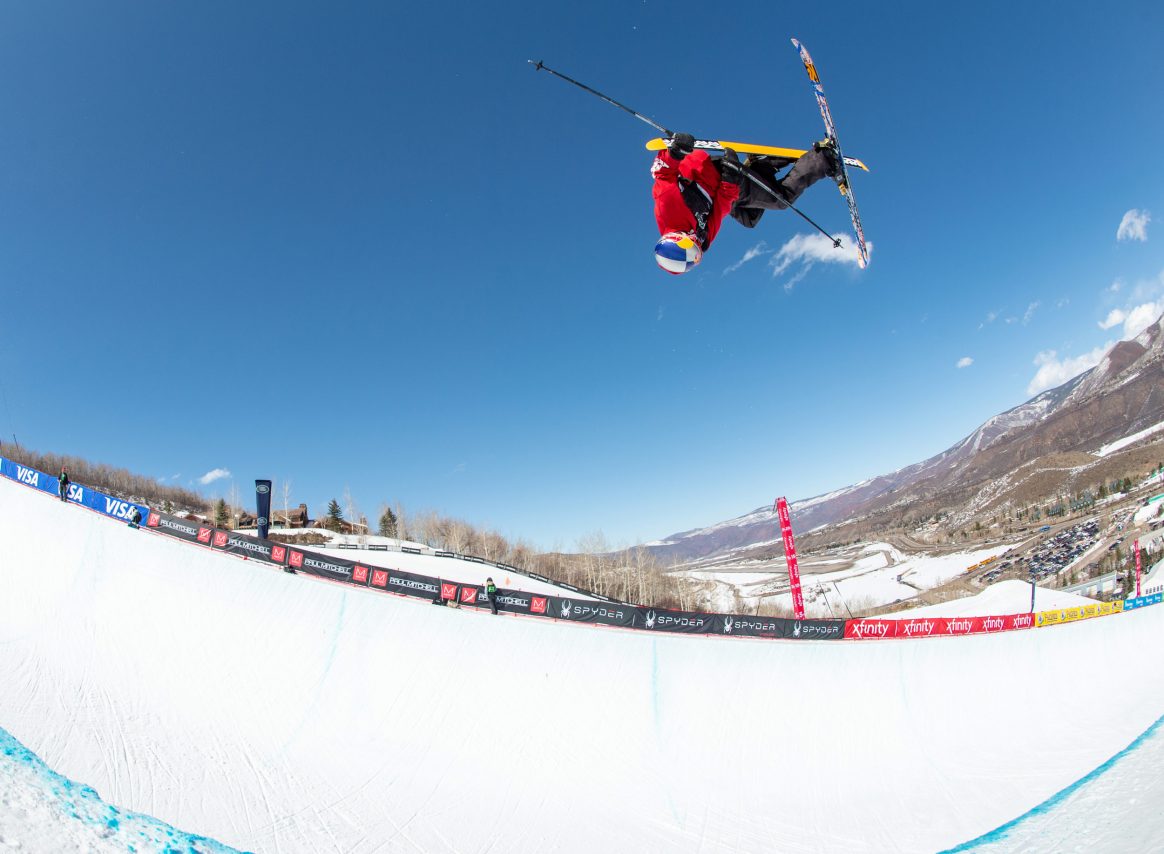 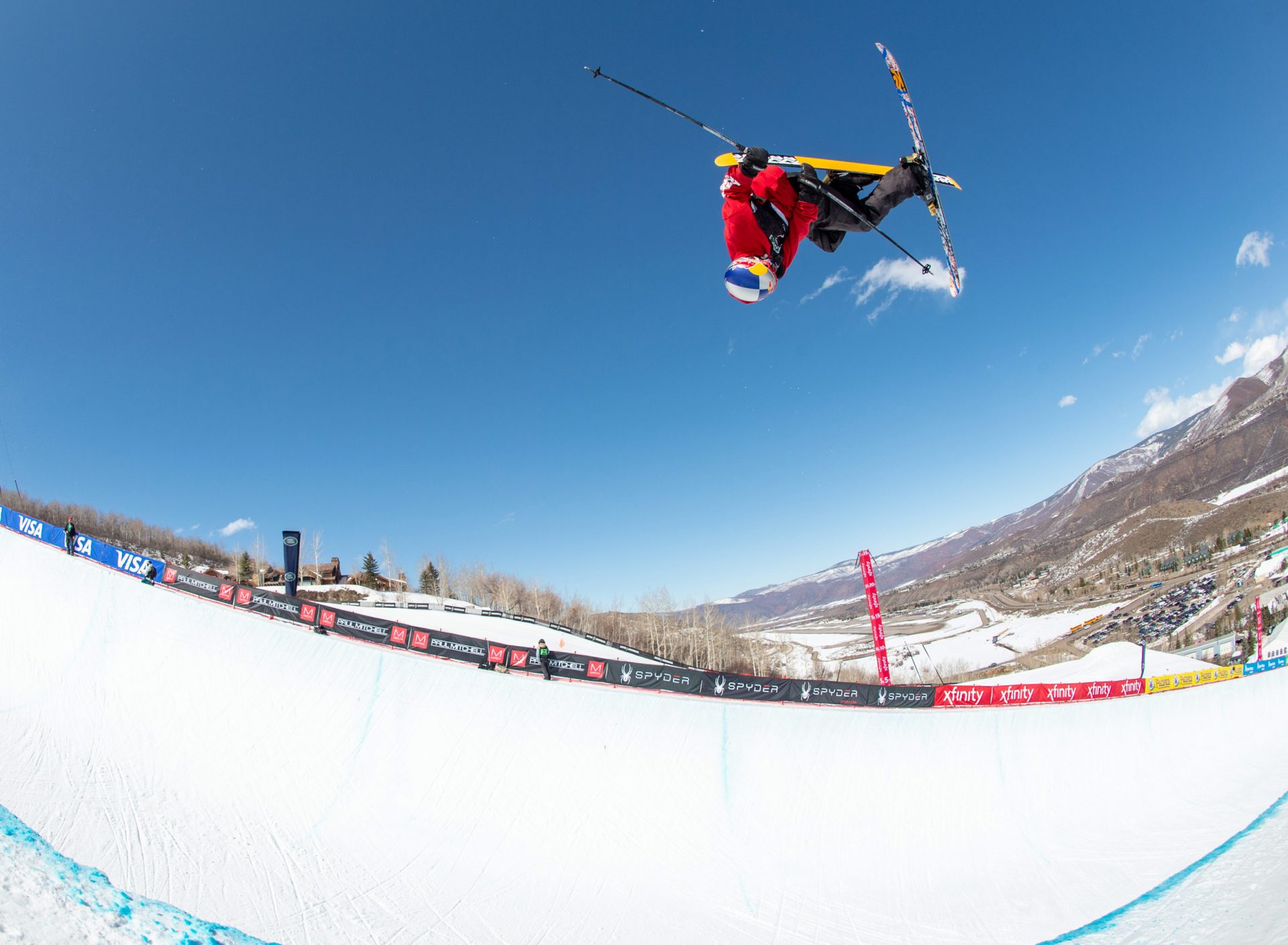 Birk Irving has one of the more unique grab games in the halfpipe today.

In the second run, both Ferreira and Simon D’Artois managed to put down runs to move into podium position, while Rolland—obviously hurting from his huge crash—somehow returned to complete a mellow second run. His days of winning pipe contests may be over, but there’s no denying that this man is a force of nature. Noah Bowman again struggled to land his final-hit rightside double cork after a beautiful run featuring the switch double cork 12 that only he can do. 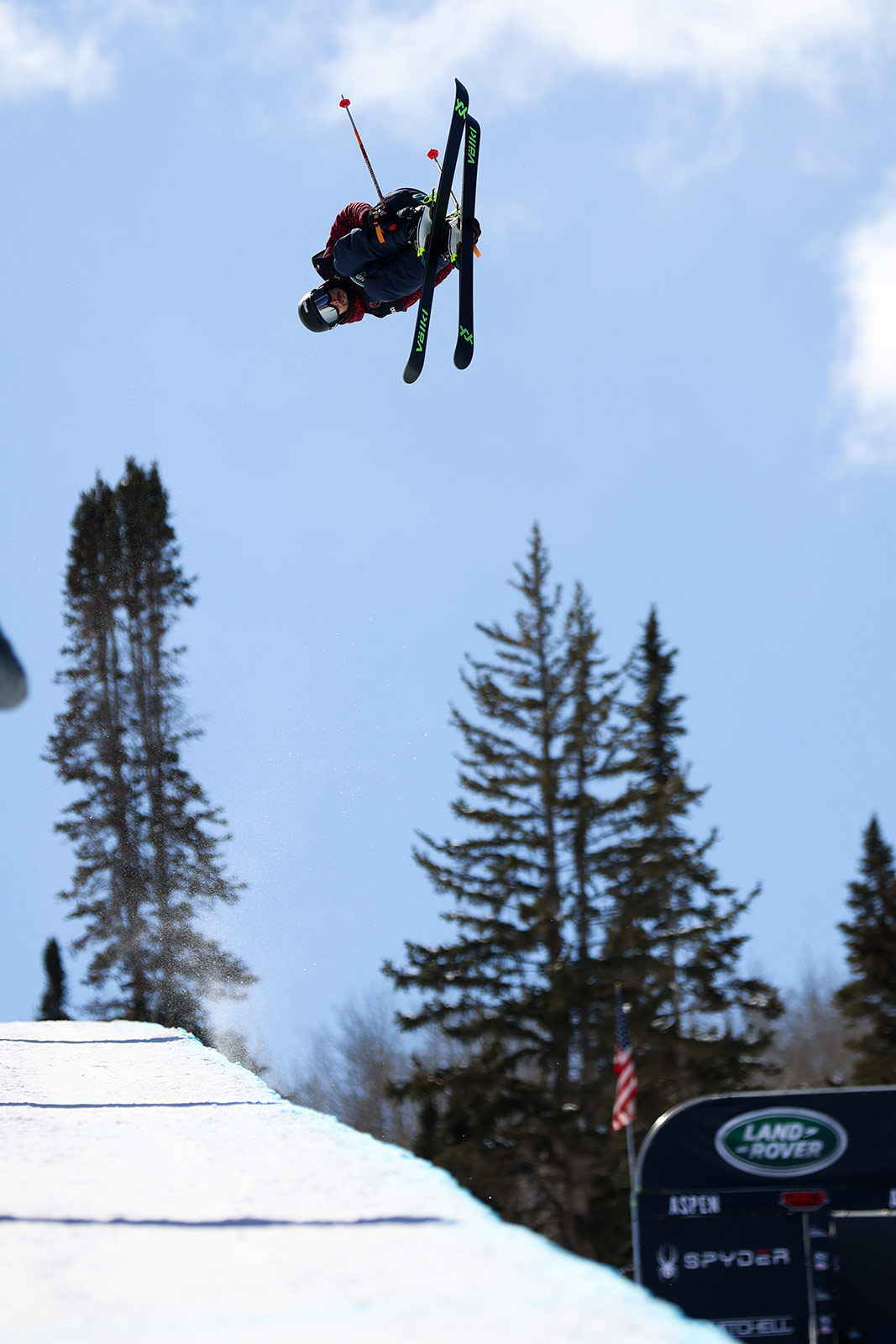 After a terrifying crash, Kevin Rolland somehow managed to ski his way through a second run. That's determination.

On Run 3, Swiss surprise finalist Rafael Kreienbühl couldn’t improve his score, crashing on a double 14 attempt. Ferreira squirreled out of the landing of his unique left double cork 10, ending his podium dreams, while David Wise crashed for a third time—a disappointing result for the halfpipe legend. Making moves for the gold, Simon D’Artois swapped out his switch right 720 for a switch right double 1080 but missed the grab, and with it, his chance to unseat Porteous. 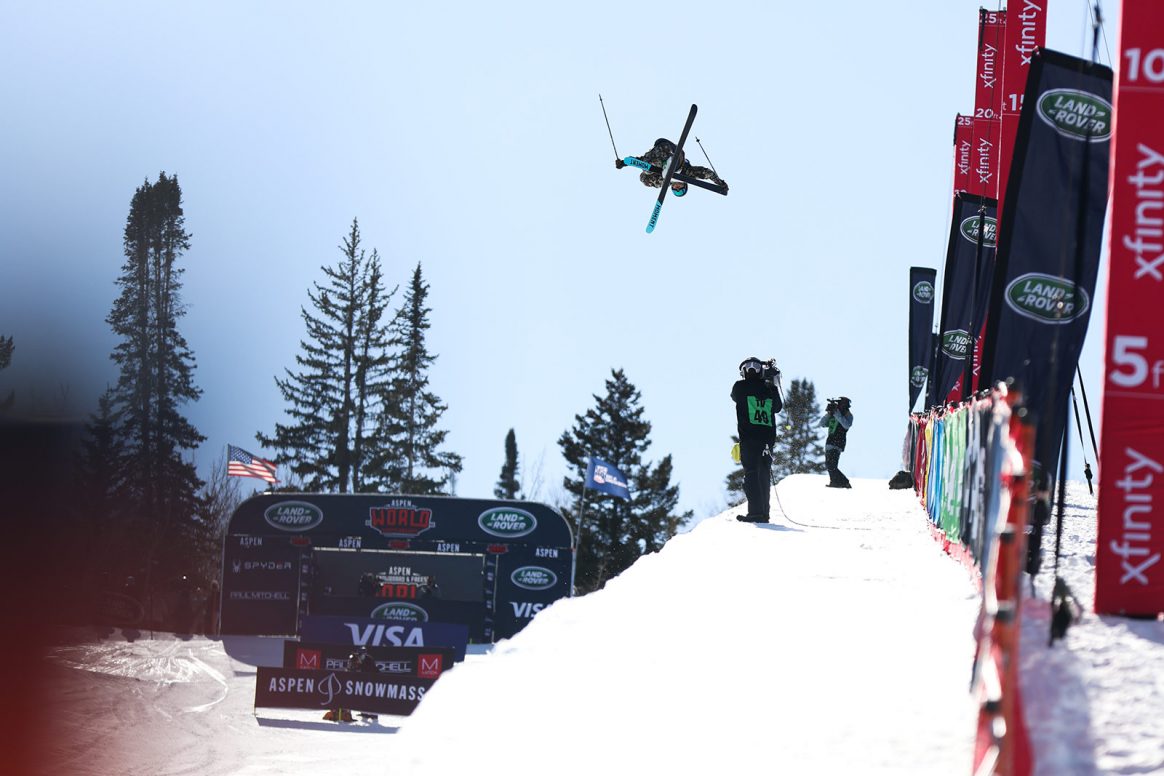 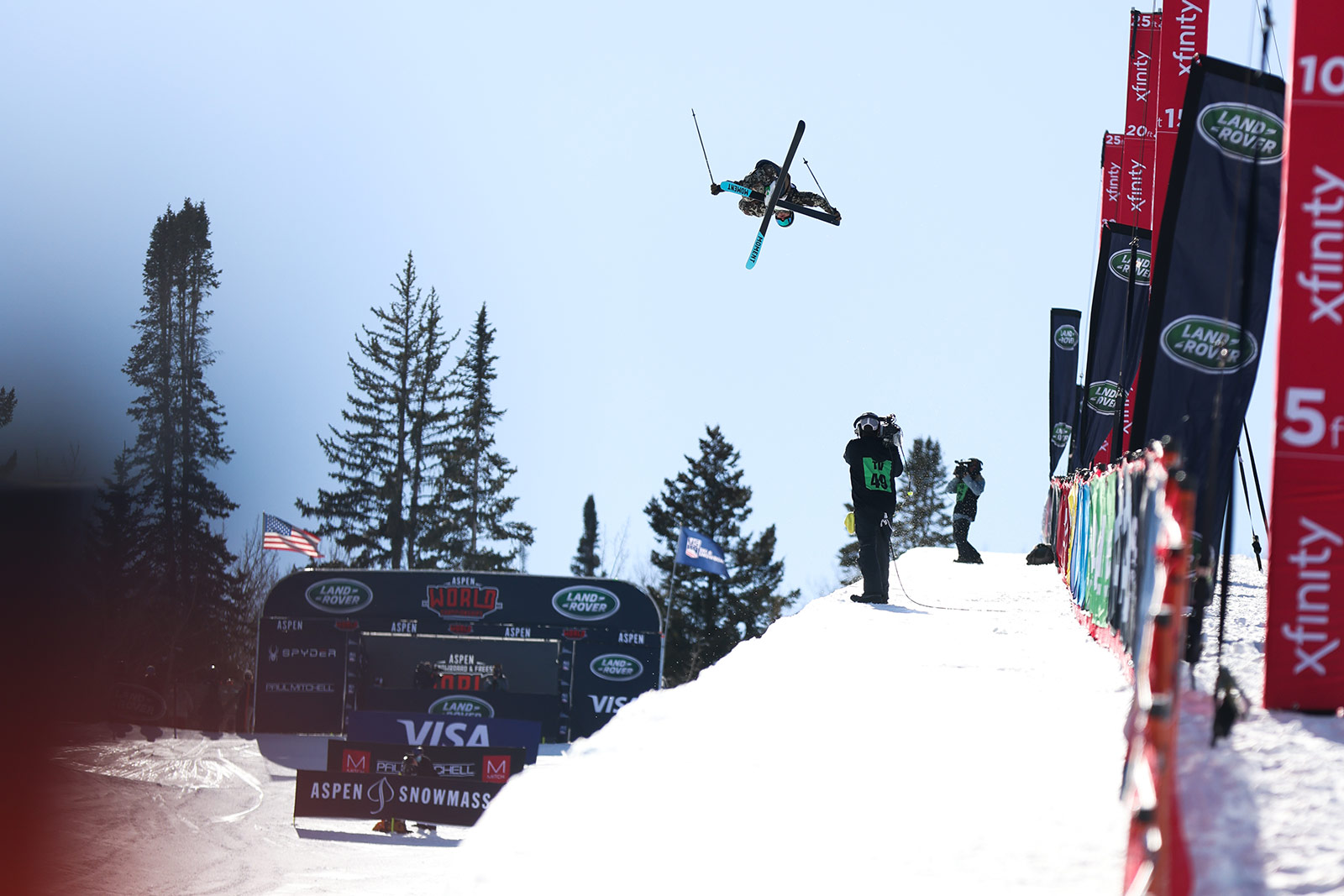 David Wise might not be the podium threat he once was. But he's still one the cleanest operators in the pipe.

Meanwhile, Blunck lost his edge on the landing of his massive first-hit rightside double 14 tail, ending his run prematurely. Porteous—who could have taken a victory lap at this point—stomped his run even bigger and better than before, adding an extra 180 to his last-hit alley-oop double for good measure, but putting a hand down. In a last ditch-attempt podium attempt, Noah Bowman hip-checked for the third time straight on his final-hit rightside double, a result that will surely rob him of some sleep. And top qualifier Brendan Mackay, after two throwaways, finally put a run down, but not cleanly enough to vie for the podium.

The final result: Porteous on top, joined on the podium by Simon D’Artois and Birk Irving. Alex Ferreira and Aaron Blunck trailed several points behind, while the Swiss Rafael Kreienbühl locked down a respectable sixth place. Unable to land clean runs (or any run at all), Brendan Mackay, Kevin Rolland, Noah Bowman and David Wise filled out the bottom of the bracket. (Click here for the official results from FIS.) 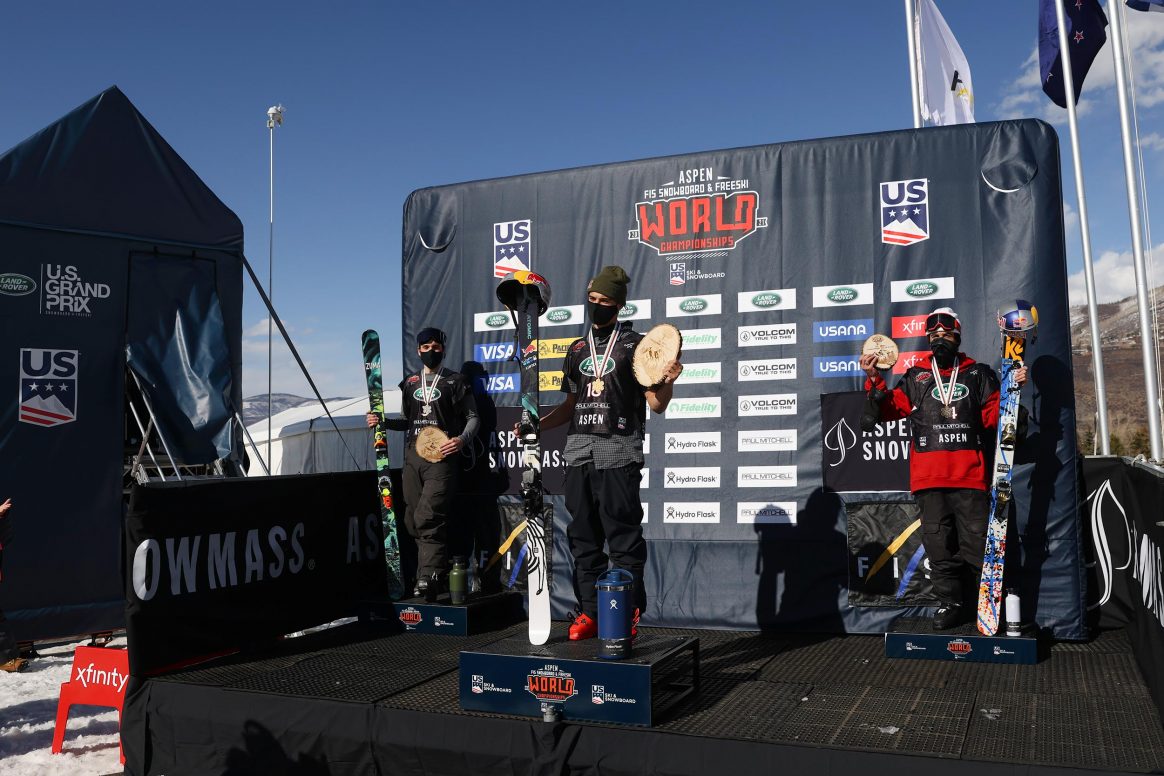 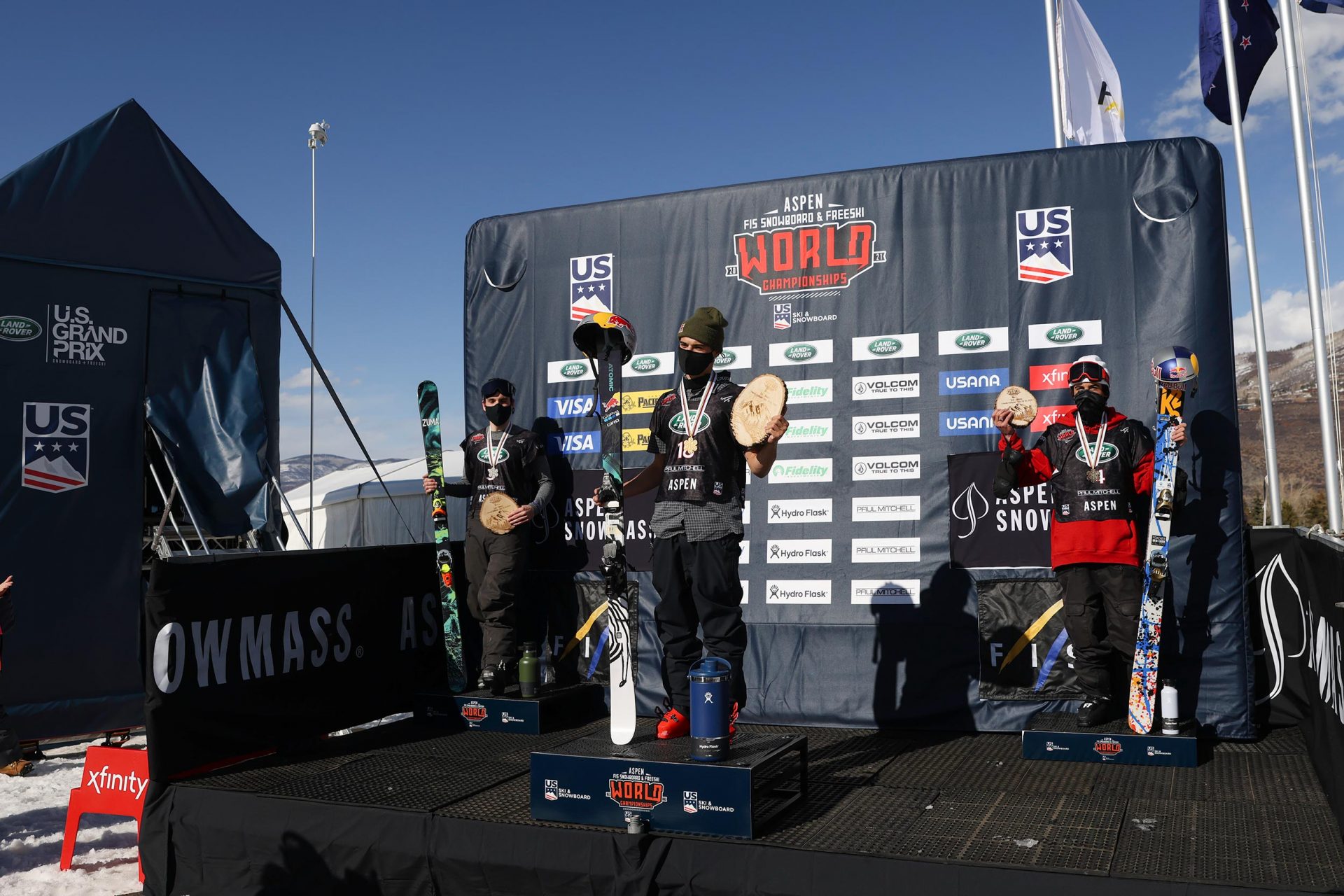 In a mirror result of the X Games Men’s and Women’s halfpipe contests back in January, Nico Porteous and Eileen Gu claimed the gold medals, and get to call themselves World Champions for the next two years. Porteous’ unmatchable back-to-back 1620s will certainly make him a top halfpipe threat for the foreseeable future, while showing us the inevitably spin-to-win future of halfpipe skiing. Gu, meanwhile, can enjoy her newly secured dominance in the pipe; but she’ll have to be on the lookout for up-and-coming talent like Hanna Faulhaber, as well as the timely return of major challengers like Cassie Sharpe and Kelly Sildaru.

2021 FIS Freestyle Championships Ski Halfpipe - Full Replay. (Note: You may need to use a VPN client in order to watch.)

Enjoy the B&E Invitational for only €69 euros per day

Steep, scary lines and hairy backcountry in "Conquering The Useless"

Enjoy the B&E Invitational for only €69 euros per day

Steep, scary lines and hairy backcountry in "Conquering The Useless"