A beginner’s guide to the Freeride World Tour

A beginner’s guide to the Freeride World Tour

Over fifteen years as a ski journalist I’ve covered all kinds of events, from small-town rail jams to the Winter Olympics. But I have to admit one glaring flaw in my ski-event resume: I’ve never been to a freeride event, until now.

It is two in the morning when the bus from Barcelona finally arrives in Ordino, a small, posh mountain village in the small, posh mountain country of Andorra, a comfortable tax haven sandwiched between Spain and France in the heights of the Pyrenees where the first tour stop of the 2016 Freeride World Tour (FWT) is being hosted by the ski resort Vallnord Arcalís.

This is unfamiliar terrain for me—a new country to ski in, and a new kind of skiing event to experience. And as the sun peeks over the mountains to illuminate the Bassera Negra contest face at Arcalís, a brief six hours after my arrival in Andorra, it’s clear that today I’m going to see something quite unlike the slopestyle, halfpipe and big air contests that I’ve attended before.

Plunging into the world of the Freeride World Tour requires a thorough re-calibration of my skiing knowledge. Here there are new names and faces to remember, and an extensive canon of past events, achievements, victories and defeats to be recalled and compared with at each new stop of the tour. There are new contest and qualification formats to understand, new athletes’ and judges’ considerations to be taken into account.

So my head is swimming with questions as the first riders begin dropping into their lines, but now isn’t the time to go seeking answers, because it’s time now to witness a FWT stop go down before my very eyes.

The first thing I learn is this: bring binoculars if you want to see anything! As the snowboard men begin their runs, seemingly everybody in the viewing area below is packing a pair of binocs to scope the action. I’m able to manage via squinting and using my telephoto lens, but the advantages of watching the livestream feed from that Cineflex-equipped helicopter buzzing over the venue are rapidly becoming apparent.

Watching the snowboard runs and chatting with skiers in the viewing area, I’m picking up new facts at every turn. Occasionally the riders disappear from view, and I learn that their runs are only evaluated on what the judges can see directly from their viewing perch on the ridge above us. This is an important aspect for competitors to keep in mind—don’t plan a big air, a technical line or a risky trick in a zone where the judges won’t see you! In fact, many of the most experienced riders seem to pick lines that cater to the viewing perspective from the judges’ booth.

As the snowboarders wrap up their runs, another detail emerges: to paraphrase the livestream announcer, experience often pays off over youthful exuberance. Competitors only get one run, and they don’t even get to ride through the venue before the competition; so the ability to properly analyze the face from afar, using experience and intuition to divine how a given line will ride and what the snow will be like, is absolutely crucial. Any previous experience riding the venue is, of course, a huge advantage. With snow levels at a bare minimum out here, the competitors who know where it’s okay to send it, and where it’s wise to play it safe, are going to be best off. 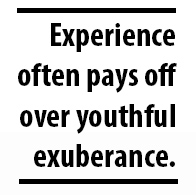 By 10am the contest face is now fully illuminated, with clear conditions holding as the women skiers prepare to drop in. Warm weather is expected over the weekend, and the contest was bumped forward to today to take advantage of the existing snow cover before it gets fried by the sun. It looks like things are working out well—though the snow in the top section is firm and crusty, the turns are creamy in the lower half, though the sharks lurk in wait.

Jackie Paaso, a six-year American FWT veteran, is the first skier to drop in, promptly setting the standard for the women with a sizable cliff drop in the top section, stomping the landing clean and skiing calm and in control through the rest of her line. Two-time tour champion Nadine Wallner is next, picking her way through a technical section to closeout air in her first FWT appearance since a bad crash last year while filming in Alaska. Tour rookie Evelina Nilsson drops in third, skiing strong and clean in her first-ever FWT run.

Another detail to learn: each year a select group of men and women qualify their way onto the tour via an extensive international system of Freeride World Qualifier (FWQ) events. Unless you pick up one of the coveted wildcard allotments, this is the only way to battle your way onto the tour. The rookies add an exciting new element to the competition—will they come out of the start gate charging, ready to prove themselves, or will they play it safe, watch and learn from the veterans, and gradually improve their game?

Today in the women’s field, the veterans retain almost full control of the podium—Jackie Paaso’s opening run remains unchallenged in the top spot, while reigning tour champion Eva Walkner of Austria slides into second with clean airs up top and a smooth, technical line choice through a central chute at the bottom of the venue. Rookie Evelina Nilsson from Sweden picks up the third podium spot.

“I skied solid, and just tried to keep moving,” says Paaso. “I wanted to have a good start to the season. I had a really rough year with an injury at the end of last season, so it feels good to come back and gain some confidence, and stay on my skis the whole way down.”

Then it’s time for the men to take to the field—and my oh my, what a show it is. Over the next hour and a half I get to witness the incredible skiing strength of this varied group of competitors, while continuing to learn the tour lingo from the announcers. There’s all the nicknames to keep track of: Fast and Furious (Jérémie Heitz). The Mayor of Stomptown (Reine Barkered). The Flyin’ Hawaiian (Drew Tabke).

And then there’s the skiing slang. Here, a “double” doesn’t mean a double flip, but rather a double drop. The snow is at “low tide”, and if you don’t already know what a “shark” is, this photo should make it obvious:

There are too many highlights to keep track of: Spanish rider Aymar Navarro kicks things off with a highly creative line choice up top, but backslaps on a big drop exiting his line. “Fast and Furious” Jérémie Heitz lives up to his nickname, flashing the venue in about half the time it takes any other competitor to reach the bottom, lacing a drop into a tight chute up top, and turning a hairy steep closeout section at the bottom into a balls-to-the-wall straightline triple drop.

The hits keep coming: last year’s champion George Rodney goes absolutely massive off a central cliff, somehow managing to avoid exploding on the landing, but losing a pole, which affects his flow through the rest of the run. Wildcard recipient Bene Mayr of Germany gets robbed on his first-ever FWT run, as his ski gets ripped off by a rock on one of his first turns. Sam Smoothy also has trouble, misjudging an air and bouncing off the rocks on his way to a hard tumble.

“I stick up hill rock landings!” Smoothy reports later on Facebook. “Not quite actually. Got my takeoff angle wrong today and landed square on jagged rock, pretty stoked to walk away with just a bruised knee, time for some chilling!”

Meanwhile the rookies are out in force: Canada’s Logan Pehota puts up an excellent performance in his first FWT appearance, and Swedish newcomer Kristoffer Turdell, the winner of last year’s European Freeride World Qualifier circuit, knocks Heitz off the top spot by perfectly stomping the biggest air of the day on a cliff in the middle section. On the final run of the day, Russian Ivan “Mad” Malakhov narrowly squeaks by Pehota to take third place behind Turdell and Heitz.

“I didn’t really choose my line until the last minute,” says Turdell. “When they asked me at the top where I’m going, I thought, ‘Shit, I’m going to go for the hardest line that I looked at—straight down.’ I wanted to do some technical skiing in that steep triangle at the start, and then end up at the huge cliff band in the middle section. I found the entry and what I thought was a good landing, and I thought, ‘This may be possible.’ And then landing it and skiing out felt unbelievable.”

I ask both Turdell and Paaso about the challenges of riding a line without getting to set foot on the face beforehand for a closer look.

“People are really shocked that you’re not allowed to go onto the face and check it,” says Turdell. “You’re standing on the other side, looking at the mountain with binoculars. I would say that’s the hard part. You need to be really focused and plan where you’re going. Technical planning, looking at things from different angles—it’s a lot of work before your run.”

“It’s definitely something that i’ve worked on over the years, and it’s not always perfect, that’s for sure,” says Paaso. “Sometimes you end up on a feature and it’s a lot bigger than you thought, or it’s not the right entrance. It definitely makes it a lot more difficult than if you get to practice your line and check it out beforehand.”

At the bottom of the venue, as the riders relax after the high-energy happenings of the day, eating grilled sausages and swilling beers, I learn another thing about the FWT—this is really just a big family. The vibe is exactly the same as I’ve felt at other events in the skiing world: these guys are mostly all friends, and though a certain competitive element is unavoidable, the FWT riders celebrate the best runs of their peers as if they were their own. This once-strange world of international freeride competition turns out to be not so different from the freeskiing realm that I hail from after all. At the end of the day, it’s just another gang of guys and gals who love to ski—they just happen to ski better than most people on the planet. And now that my cherry’s been popped, I can’t wait to see more action from the tour.

(Did you miss the livestream? You can watch a full replay here). 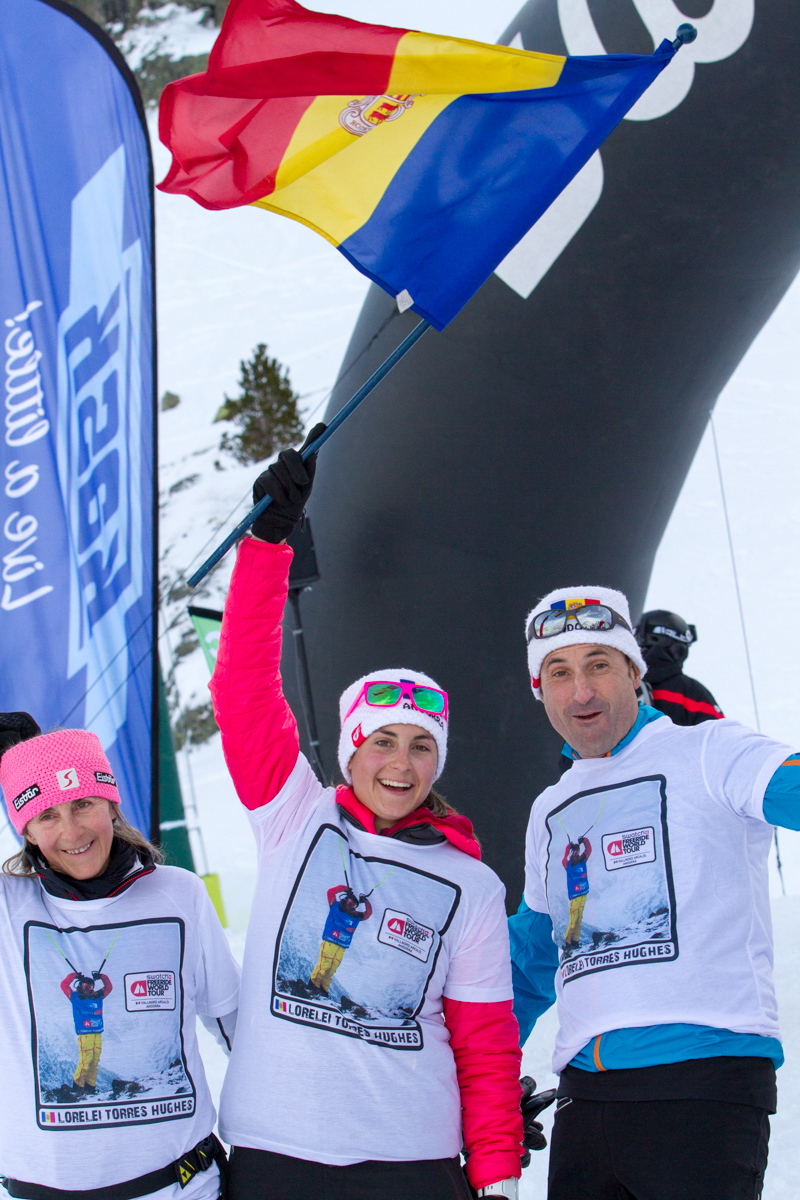 The Andorrans are out to support their hometown rider, Lorelei Torres Hughes. 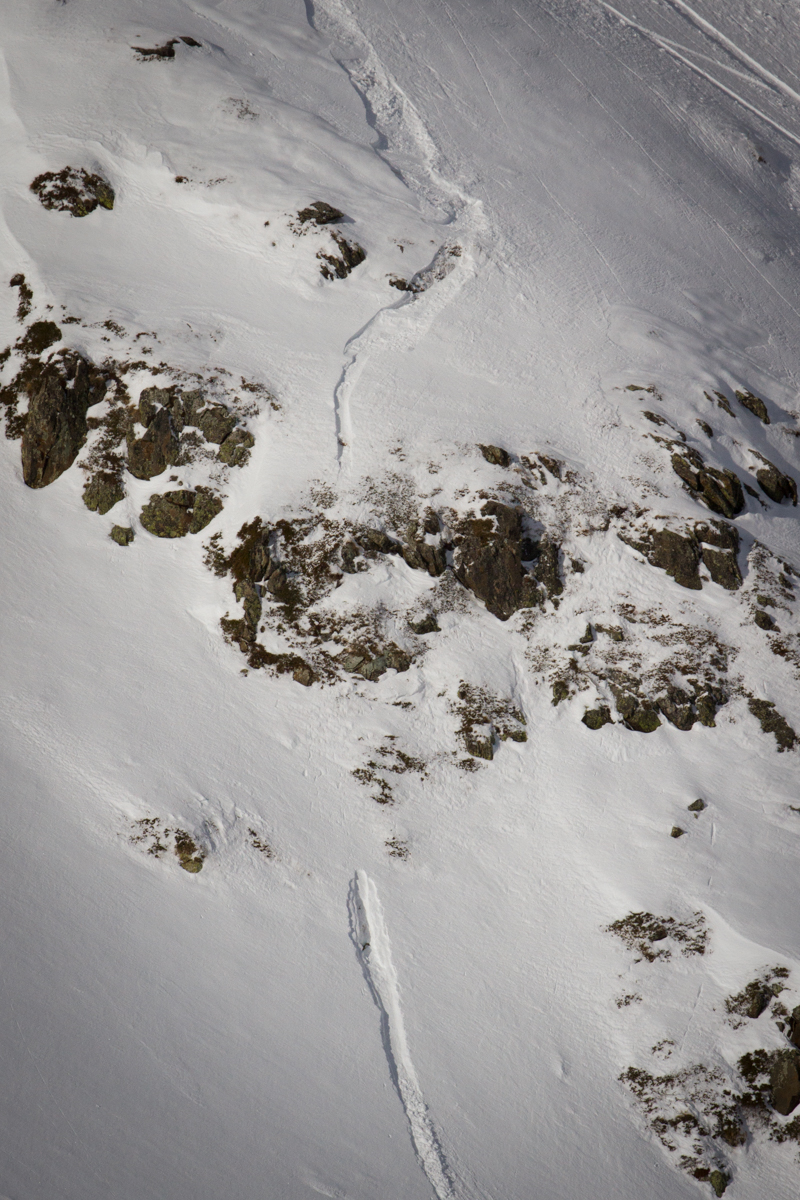 Rock on the inrun, and in the landing — low tide in Andorra. 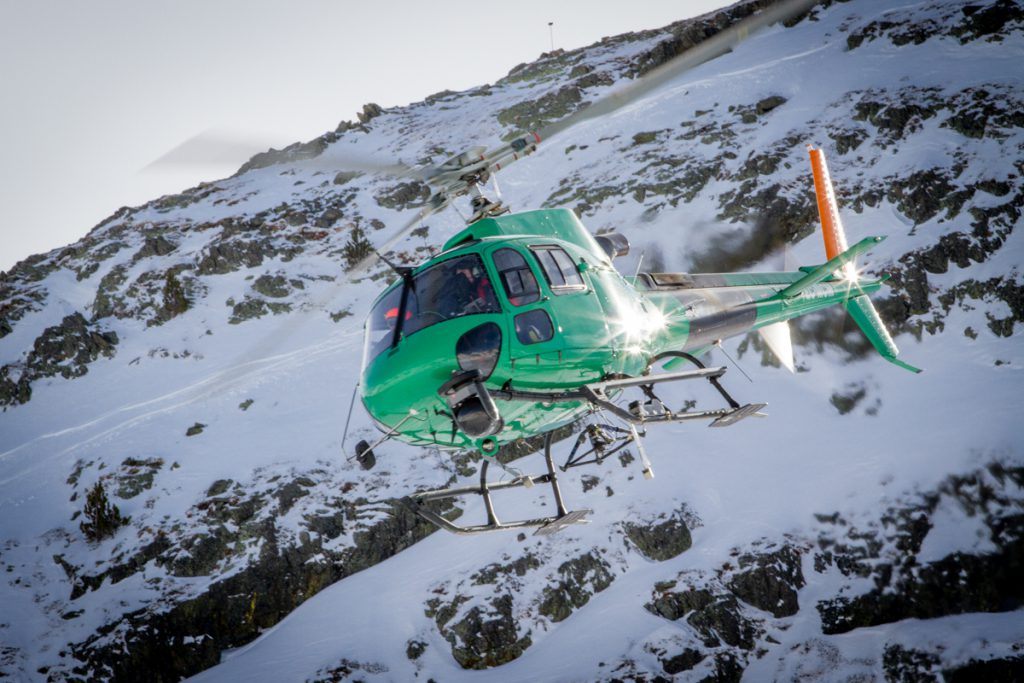 iF3 Celebrates the Life of JP Auclair

iF3 Celebrates the Life of JP Auclair