Welcome back to our recurring spotlight on Europe’s freeski crews! This time we fly from the Pyrenees to the Swiss Alps to meet an original group of guys called Buldozlife. If you’ve never heard of them, don’t sweat—we’re here to get you back on track.

I met Buldozlife at the High Five Festival for the rainy outdoor premiere of their new movie Brainmassage, which just dropped online. Click play below to enjoy the fruits of their labors in the Swiss streets, then read on to learn more about the squad. 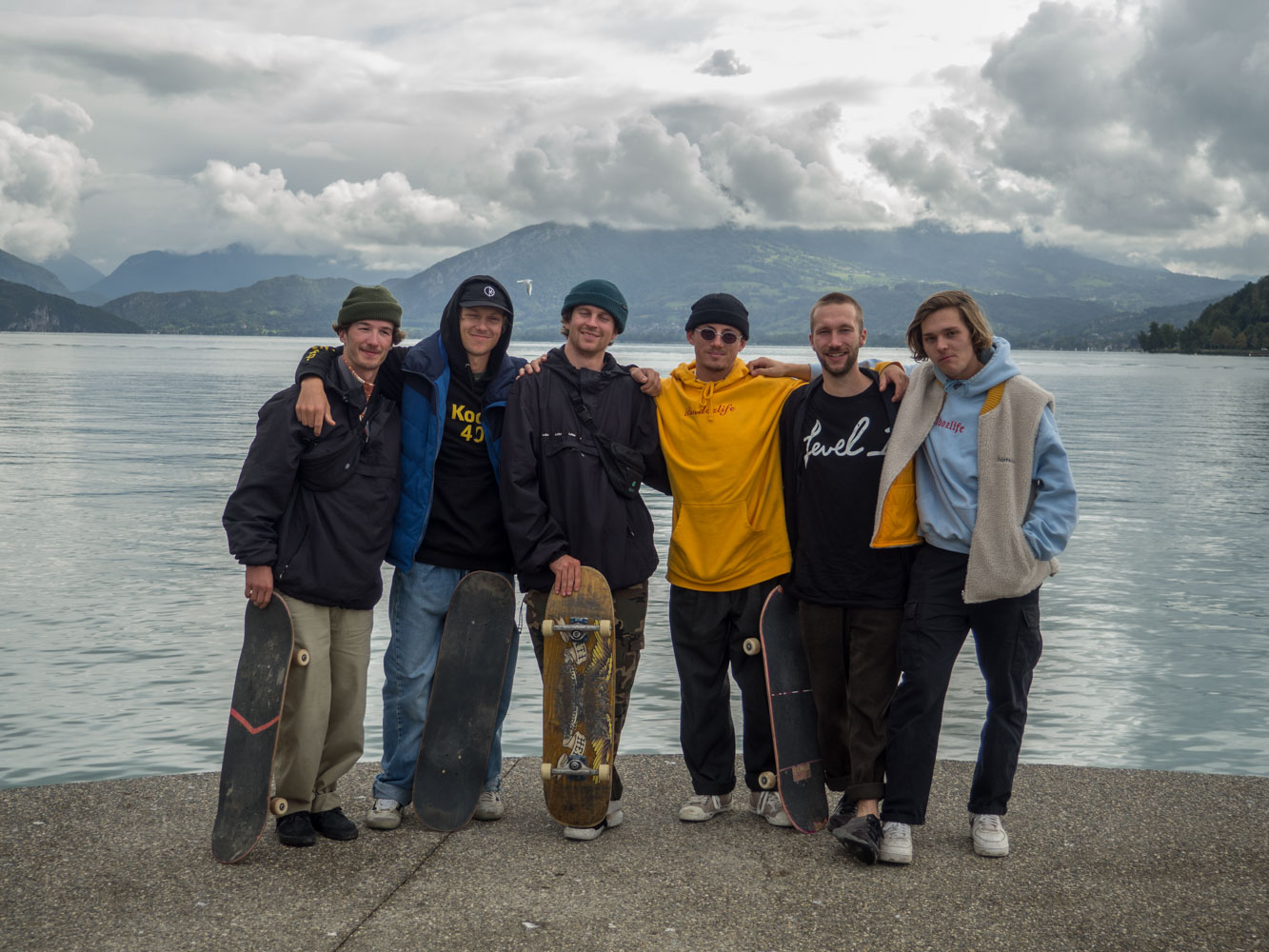 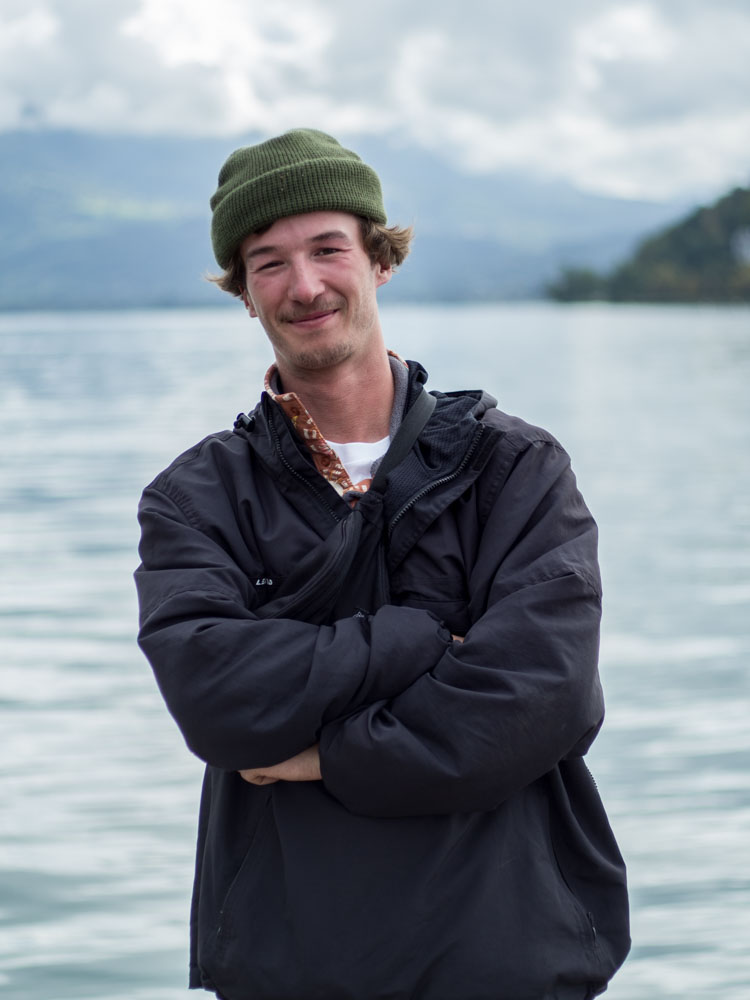 AGE: 23
LIKES: Gassing myself, cutting trees and my homies
HATES: Nothing really, I love more or less everything
HOBBIES: Ski, music, videos and art
ANECDOTE BY THE CREW: “He is the most artistic lumberjack of the world”

AGE: 25
LIKES: Reading, politics and everything that is artistic
HATES: A lot of things—the CIO, macho people and not a big fan of the UDC (political party in Switzerland)
HOBBIES: Skiing and filming with the homies because we always laugh, going to school and everything that is party party boum boum tss tss really really fast.
ANECDOTE BY THE CREW: “If his parents had pushed him to do field hockey, today he would be pro” 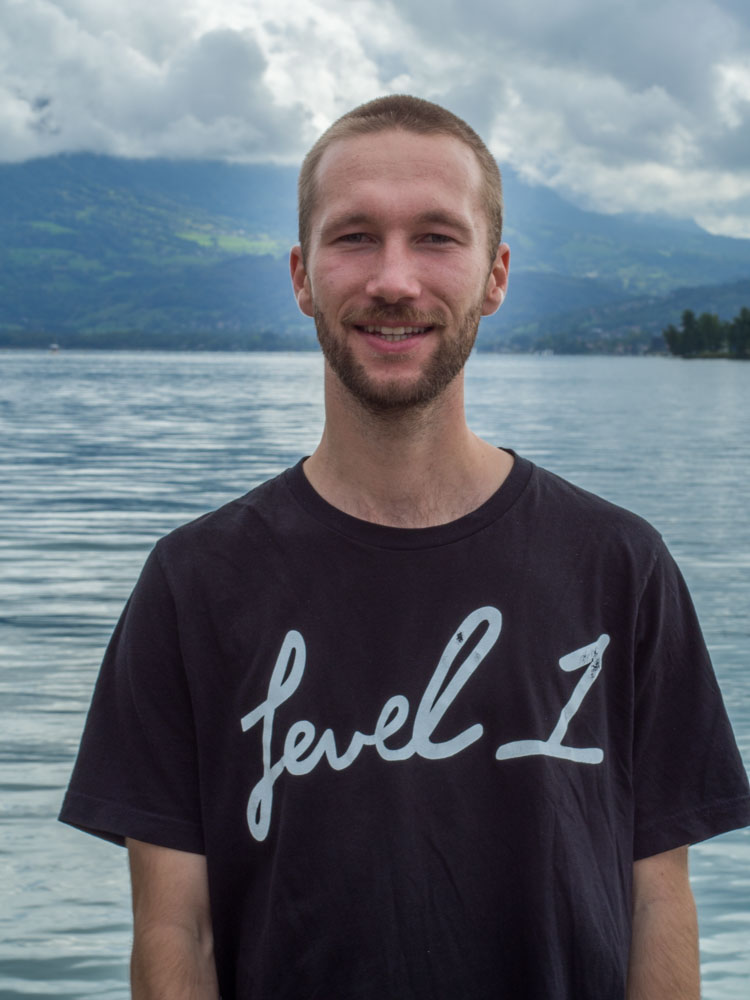 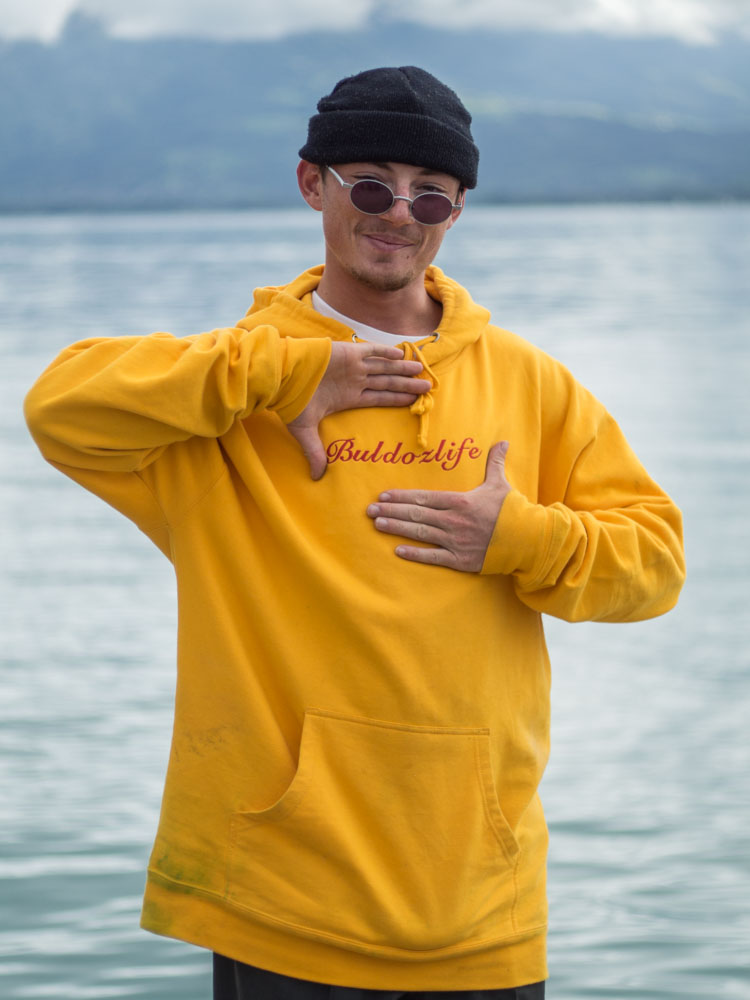 AGE: 21
LIKES: Music, sushi and hanging out with my friends
HATES: Competition and the army
HOBBIES: Skiing, being a cabinetmaker and the army
ANECDOTE BY THE CREW: “It’s been like a year since he’s seen his folks because when he was off on weekends, rest of the time he is at the army, he was always coming with us to ski and film”

AGE: 23
LIKES: Editing, flying drones, and the “Classico,” which is a special meal made by me: pasta, cordon bleu escalope, and spinach with cream
HATES: When there is too much noise and too much people around
HOBBIES: Skiing, skating, and making videos with my drone
ANECDOTE BY THE CREW: “If you are curious, you can go on Youtube and look for a video called something like “video crash freeski 2011″ with 60k views… it’s Sampo falling for 5 minutes” 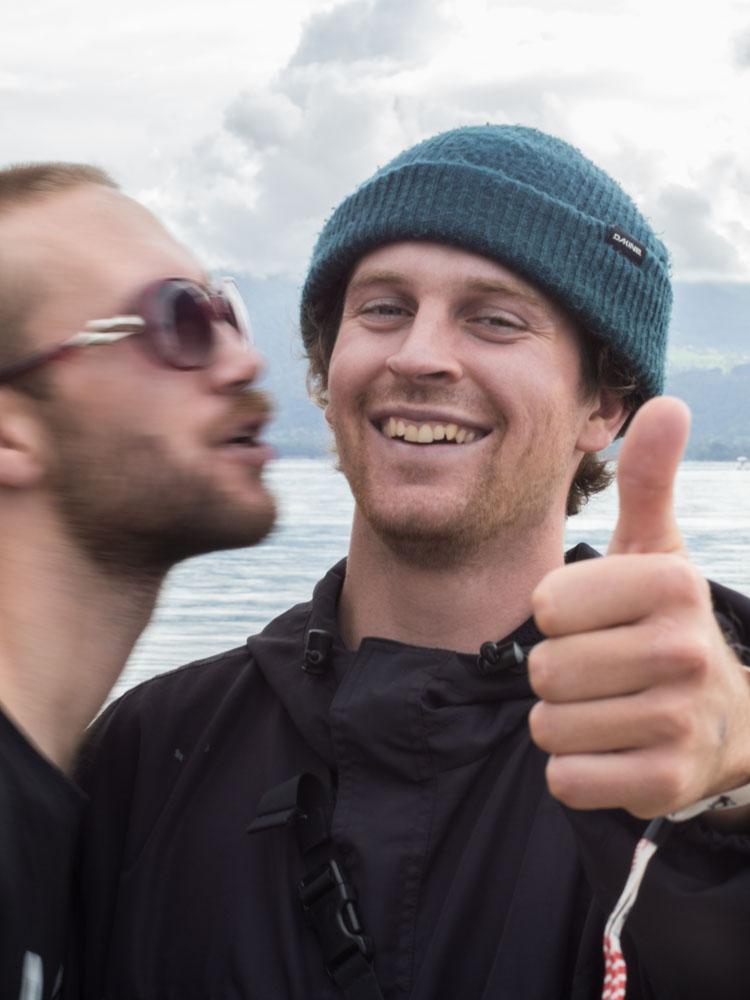 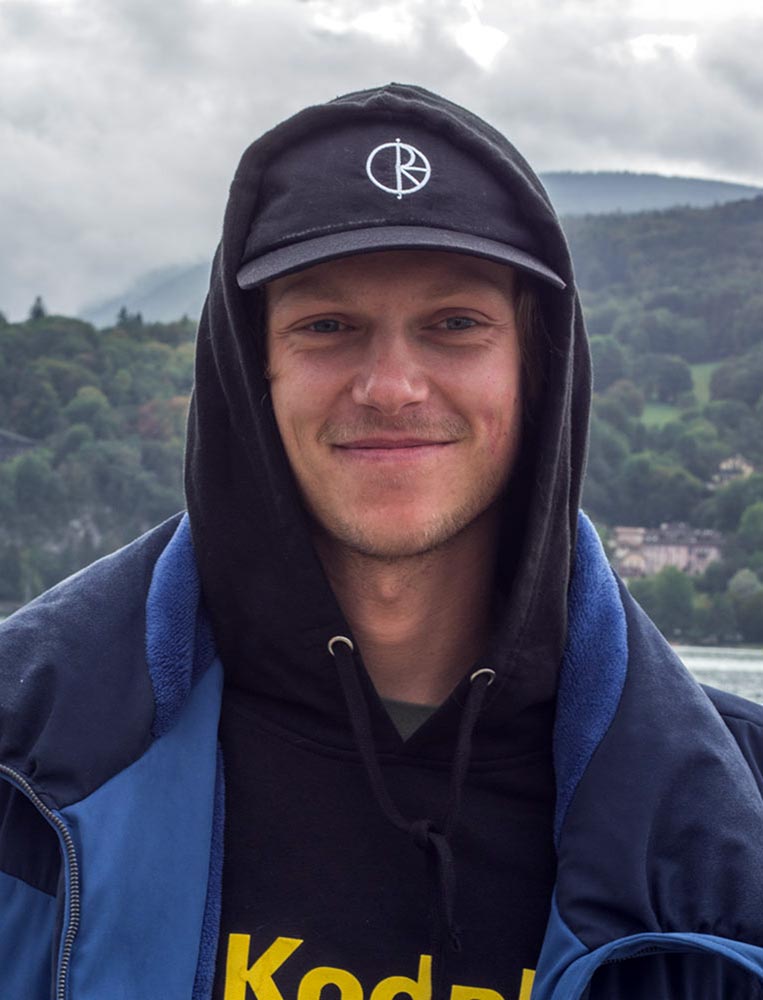 AGE: 24
LIKES: My wife, eating lasagna and surfing
HATES: I hate lazy people… but I am a bit lazy too… so I hate myself when I am lazy
HOBBIES: Skiing, surfing, skating, being with my homies and do little « durum » parties
ANECDOTE BY THE CREW: “A few years ago during a party, we found Benji sitting on the stairs totally high… so we took a picture and did a photo montage with Gollum next to him. For the next four years, everybody called him Gollum”

AGE: 20
LIKES: Filming, watching videos, concerts, music, trap being on my computer, and the fashion week
HATES: Backflips and doing them. It’s impossible!
HOBBIES: Ski and music
ANECDOTE BY THE CREW: “Even if he’s the crew’s brain… you should go follow artyboy420 on Instagram. You’ll see” 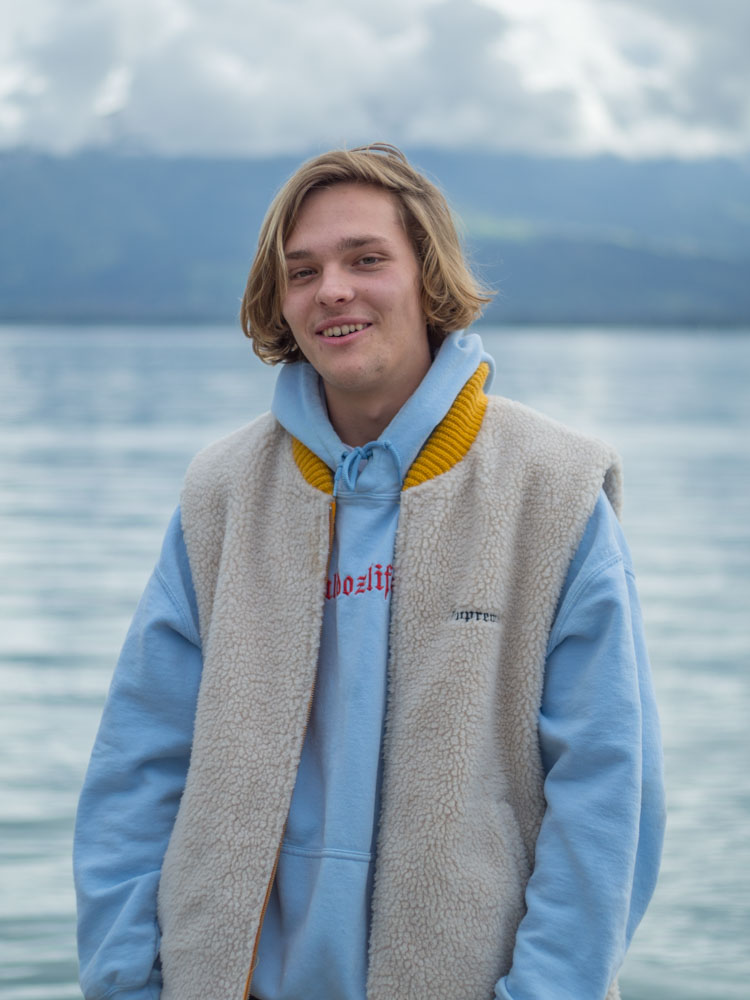 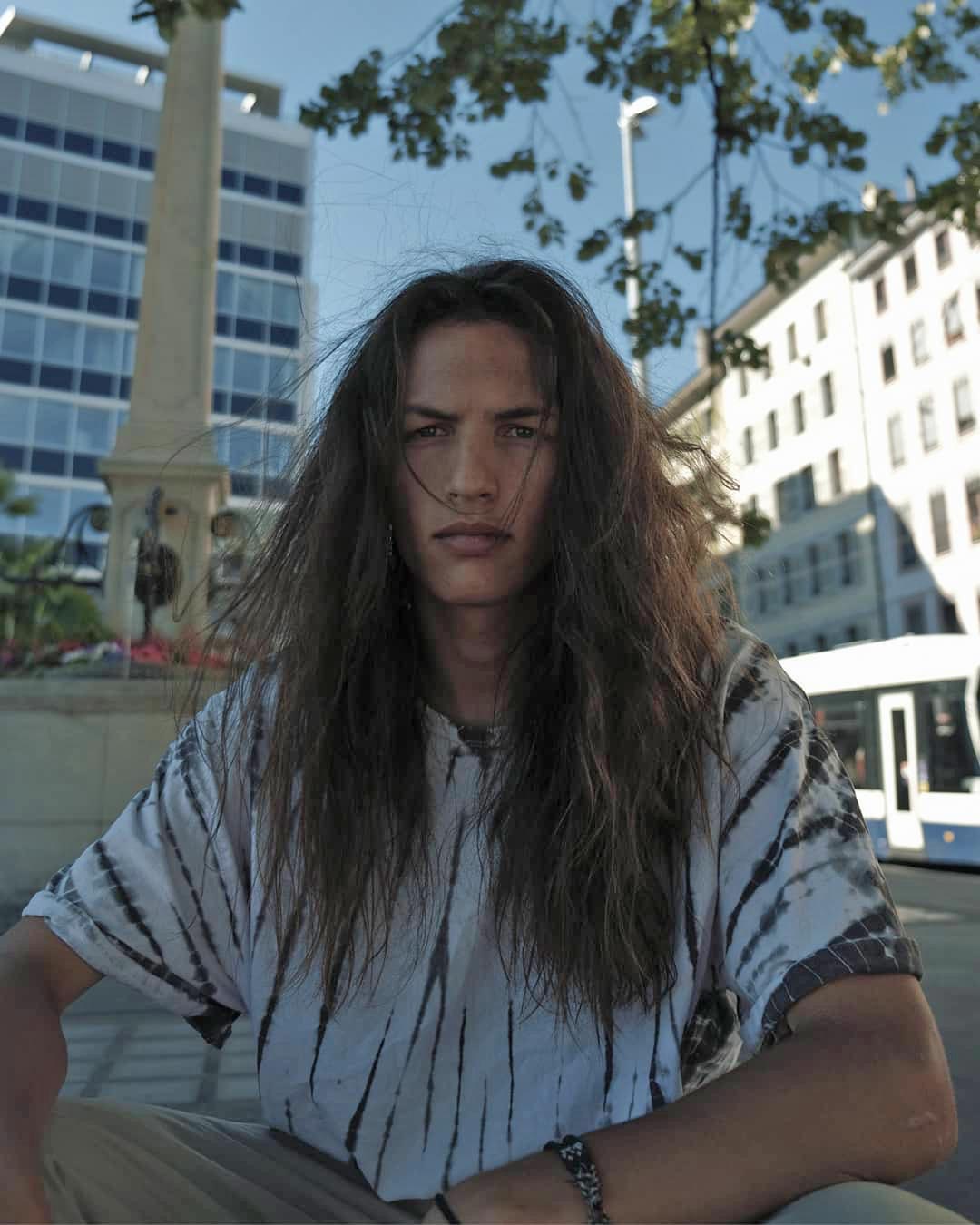 AGE: 19
LIKES: Good vibes, connection and energy. I am also in love with skiing.
HATES: Racism, poverty, war and the fact that we are not equal to each other
HOBBIES: Skate
ANECDOTE BY THE CREW: “Isaac is the guy that receives more nudes than messages”

AGE: 24
LIKES: My dog Constance
HATES: Jerks
HOBBIES: Golf, golf, golf and hockey
ANECDOTE BY THE CREW: “Paul goes freeskiing maybe five times a year and still destroys everyone. Otherwise he does snowboarding or alpine ski. He also has the biggest banger in the movie” 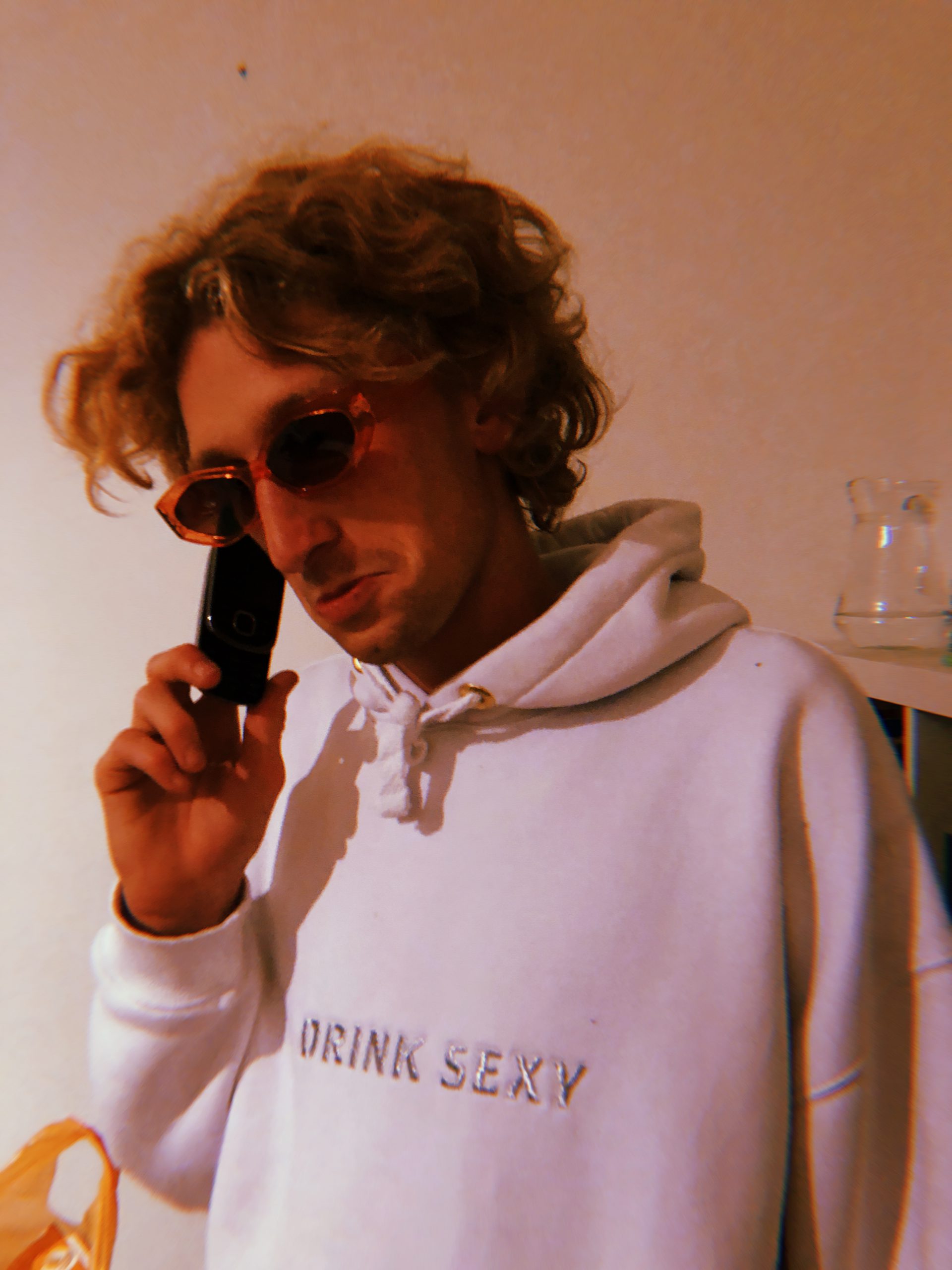 Buldozlife is formed by a bunch of skiers from different backgrounds in Switzerland who spend their spare time having fun, filming and playing in the snow, then sharing it and inspiring the kids to do the same. When you meet the guys from the crew, you enter into their world: a place where everything is cooler and mellower, where skiing is no longer a sport, but pure fun and entertainment; where competition is nonexistent and being unhappy is not an option. Welcome to the world of Buldozlife.

Charlotte: When did it all begin?
Buldozlife: Maybe in 2013. We were already friends and we skied together. But one night we rented a place for a party. The next day when we woke up, everything was broken, and we received an email saying that we had to pay for the repairs. So we made a WhatsApp group named “Buldoz,” because what does a bulldozer do? Well, it breaks everything. The WhatsApp group stayed around, because this was where we invited each other to go skiing. This is why we are called Buldozlife today. So in a way, we can say that the crew is the result of an alcoholic party, a WhatsApp group and a few thousand Swiss francs we had to pay. 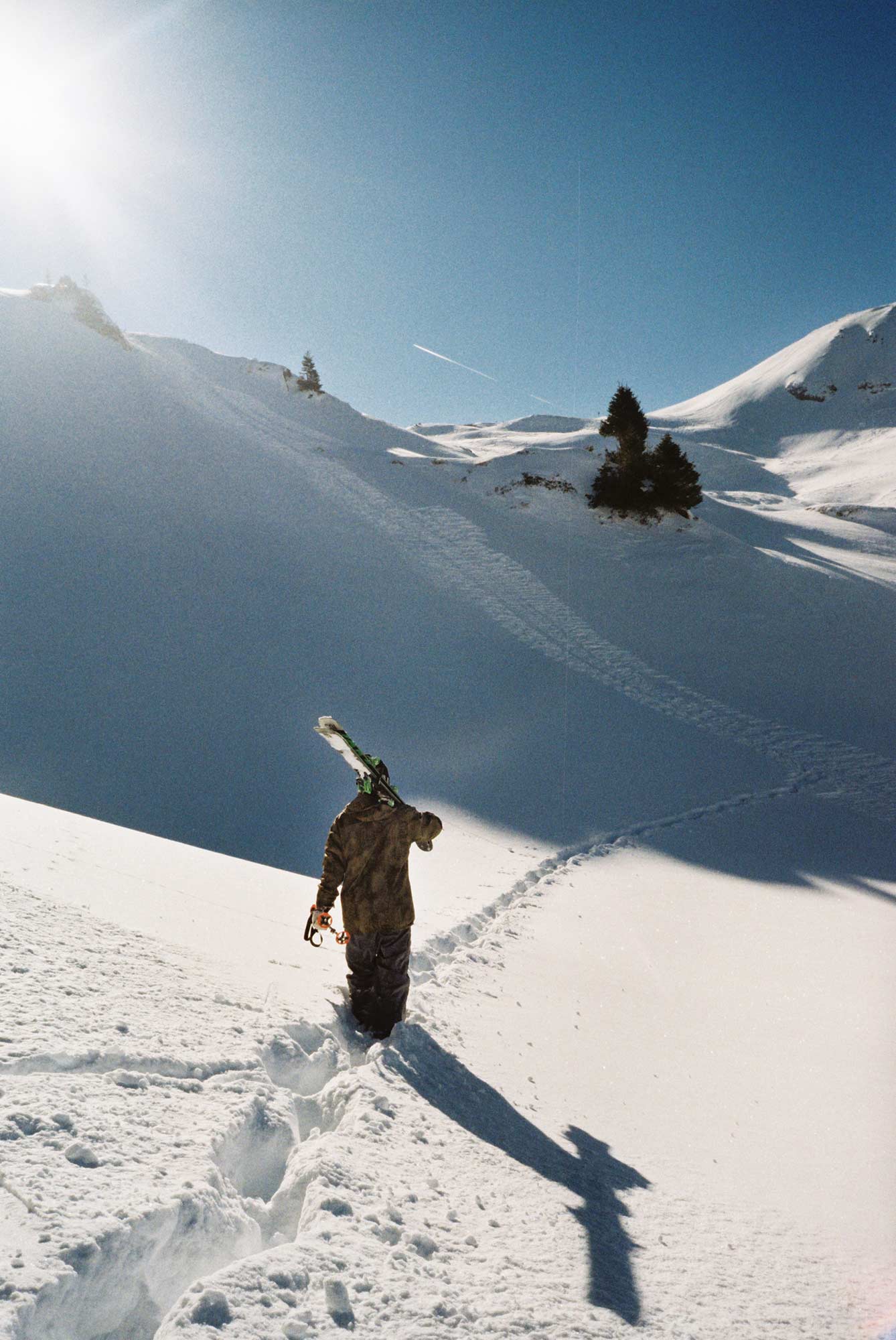 What defines you?
We are just a group of homies with no budget who film themselves with cheap cameras (some of them cost 50 bucks, and others 300). We haven’t been perverted by commercialization to do a movie with a certain budget for a brand. Everything we’ve done, we’d have done it anyway, with money or without. Even if we don’t have any, we always find a way to see each other and do what we love. This authenticity is what defines us. What we try to bring out is that it’s still cool to ride even if we don’t do big tricks. We try to show that it’s all about having fun. We don’t need triples.

Why use cheap cameras?
As we were saying, it’s above all a budget question, we’re all students or whatever. Then there is this aesthetic thing in 2019 where it’s trendy to have grain in your pictures like in the 2000s. We are in tune with the times—we are in fashion! But we also want to give the impression that this was filmed by a dad making his holiday video. It’s our “dad camera.” 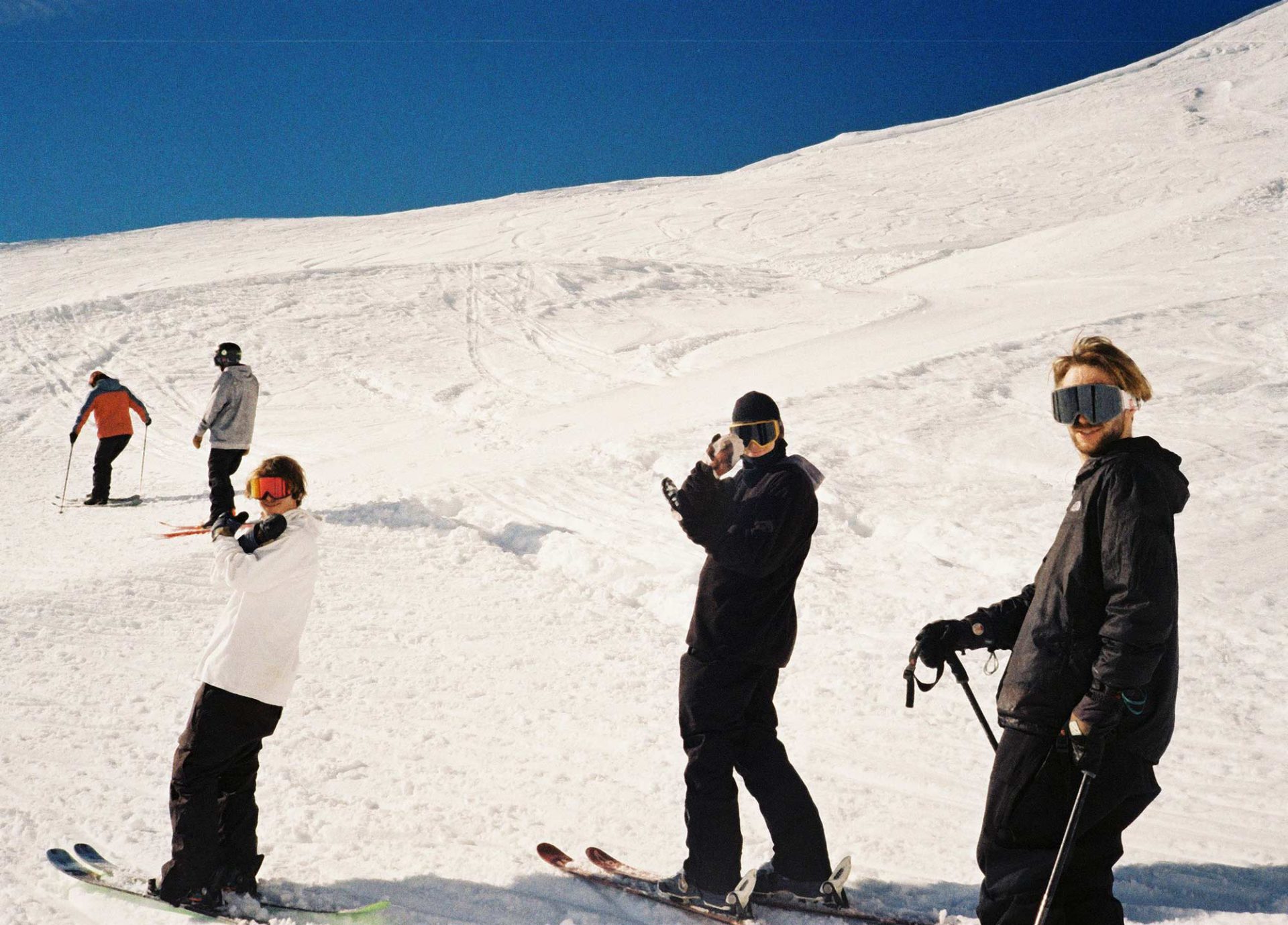 And what’s this thing with your tricks? They all are so groovy and creative!

We are trying to do different things besides just big tricks. Some of us bought the most flexible skis that they could find. It offers possibilities to lean and press in different ways. The creativity, the vibe… all for the love of skiing. We put a good mood before performance.

What’s your favorite place?
To make a movie, we prefer the street. But at the end we all are park rats, especially at the end of the season when everything turns soft. We can cruise around in t-shirts and with our “kits.” The “kit” is one of the words that defines Buldoz. Like in Mario Kart, you have to choose your starter pack: that’s the kit. So every weekend, we come out with a new kit to impress each other. That’s the Fashion Week! 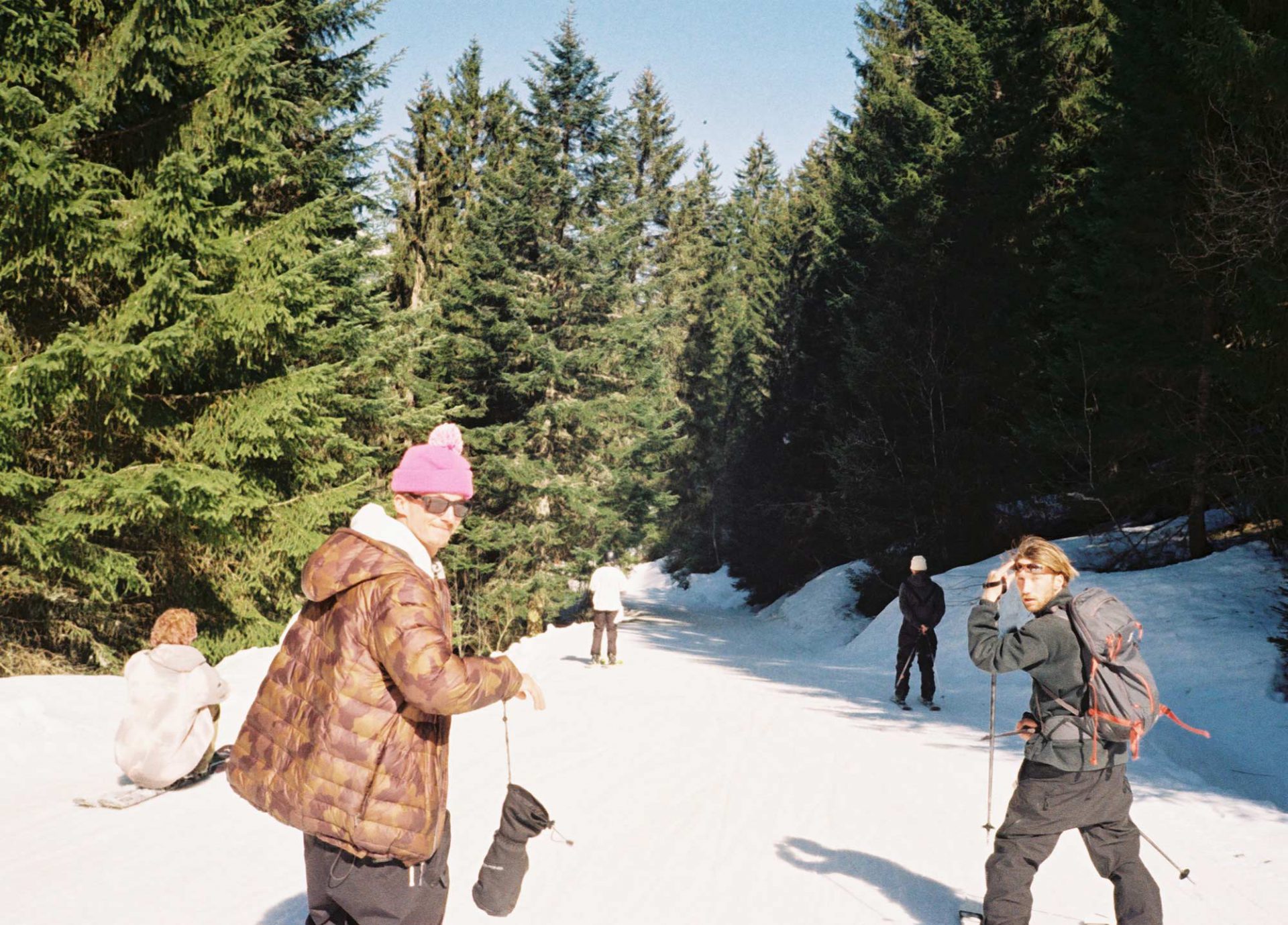 What do you have going on this winter?
Nothing is really planned because it’s not written down, but we are trying to do a trip to some abandoned places to do some street skiing. We want a dark atmosphere, like there is in places in eastern Europe. Then we’ll catch up with our friends in Sweden. We also want to go to Mammoth to film a little part there.

How do you find your spots?
We cruise around town to get some ideas, which is always easier when there’s snow. Maybe we’ll see videos from snowboarders who have already visited some spots, and we get inspired from them. Sometimes we try on Google Maps with Street View. But we have to be realistic: in Switzerland it’s really complicated to find spots. In the summertime when we’re all doing stuff on our own, whenever we see something, we send it to the others. And this ends in a list of stuff to do in the winter. To be honest, we are completely crazy to be looking for what we’re gonna do in winter, even during the summertime. Every rail is potentially a spot for us. Sometimes I really feel like we we’re 12 years old doing this kind of stuff. But we do it with a smile. 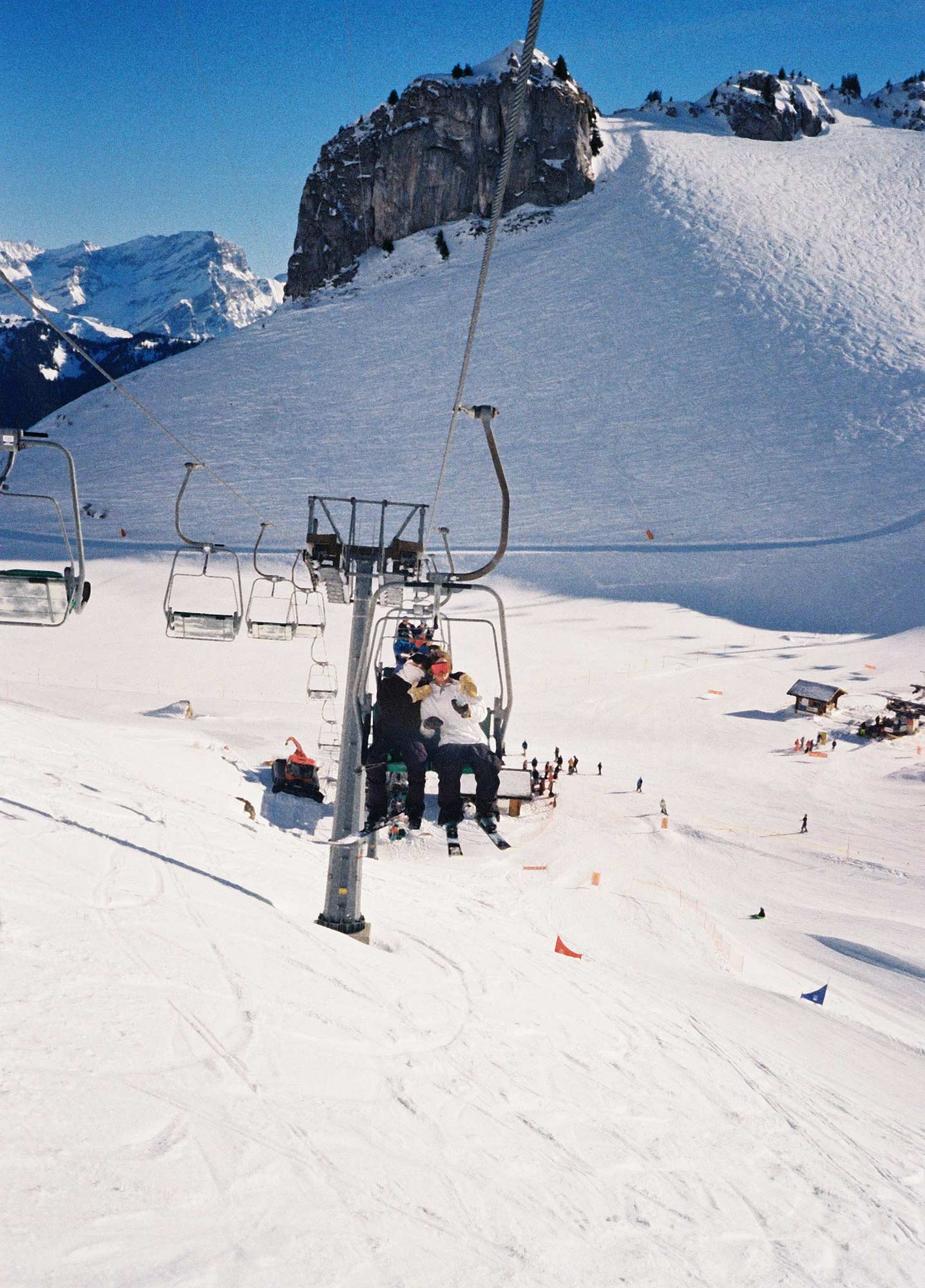 Do you have any dreams?
Going to Kimbo Sessions! I think that every skier from Buldoz wants to do it. We just saw the movie and it was super inspiring. I really think that it will be a movie etched in the history, because it’s completely fucked up. They all are so good. Every year, they turn the level up. Also, we would really love to do this trip to the eastern countries and the Balkan states. That’s kind of a dream for this year. But I think that our communal dream is to continue to ski and make a movie every year. We will see how long this is gonna last. And maybe at the end, we’ll all do guide freeride stuff, and we will continue to study Gasology in mountain cabins at age 40.

Do you have a life outside of skiing?
That’s what we were saying about the background of Buldoz, we all come from different universes. Some of us don’t have enough time, other have more, but still we manage to go skiing every weekend. Some of us are students, others are working, there is even one in the army! But as hobbies, we can say that we all like a bunch of other stuff. Some of us skate on their free time, bicycling… Giles did a lot of alpinism and climbing before going to the army and becoming a lieutenant (military service is obligatory in Switzerland). Yohan loves hanging out in nature when he’s not working as a lumberjack, and some of us are studying politics or informatics. 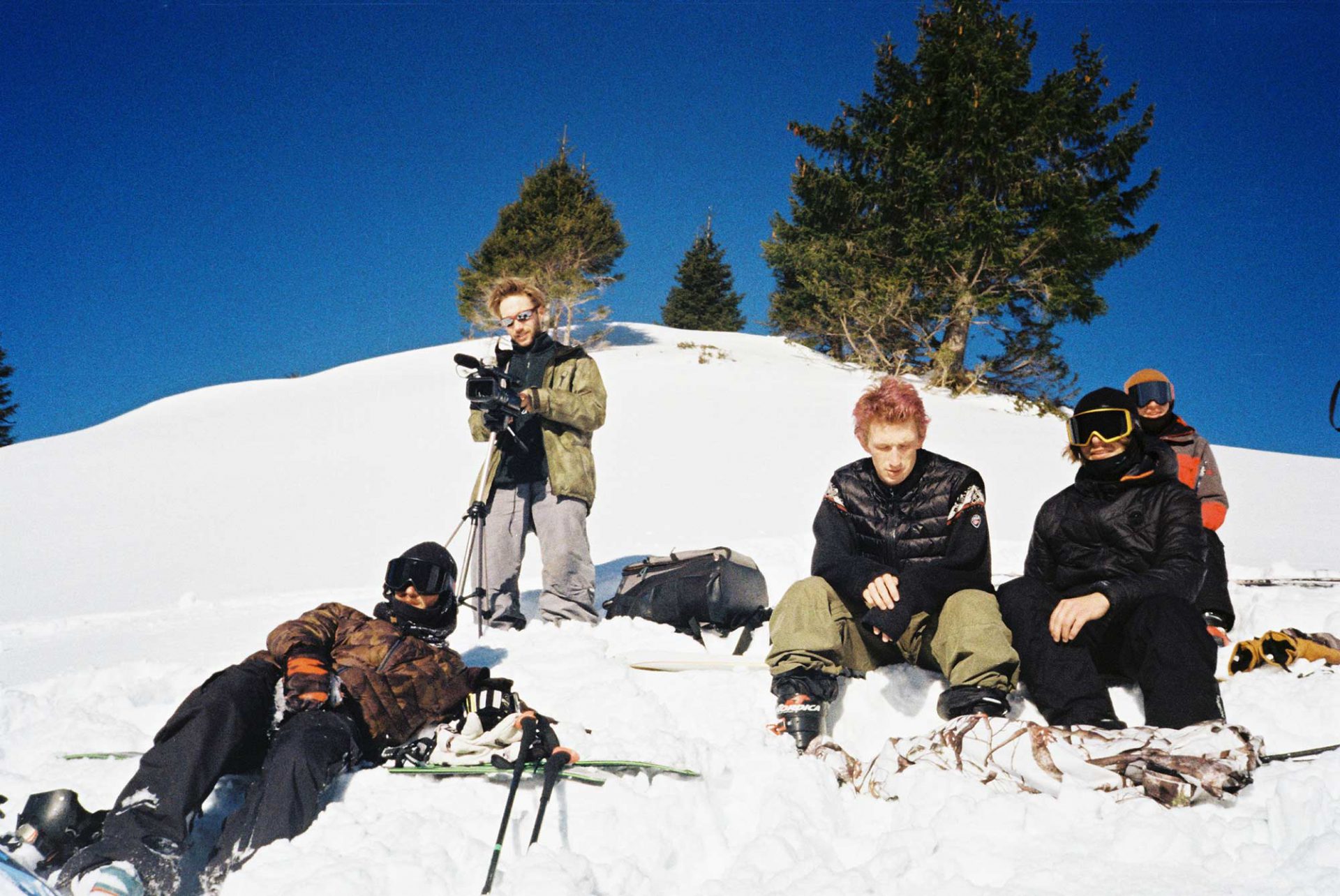 What gets you motivated?
To get the shot! When we’re hanging or chilling anywhere, the essential part is to get the shot. And the concept too. We love everything that’s “conceptual visual art.” We can record anything and try to get something from it. Mini-golf, for instance. The point is to bring out something visually interesting. Like shooting flowing water is awesome, or even birds or buildings… what’s crucial is when a friend gets the trick, to zoom in on his face, ’cause he’ll probably have a big smile. And this will be the best shot of all times. It really matters. 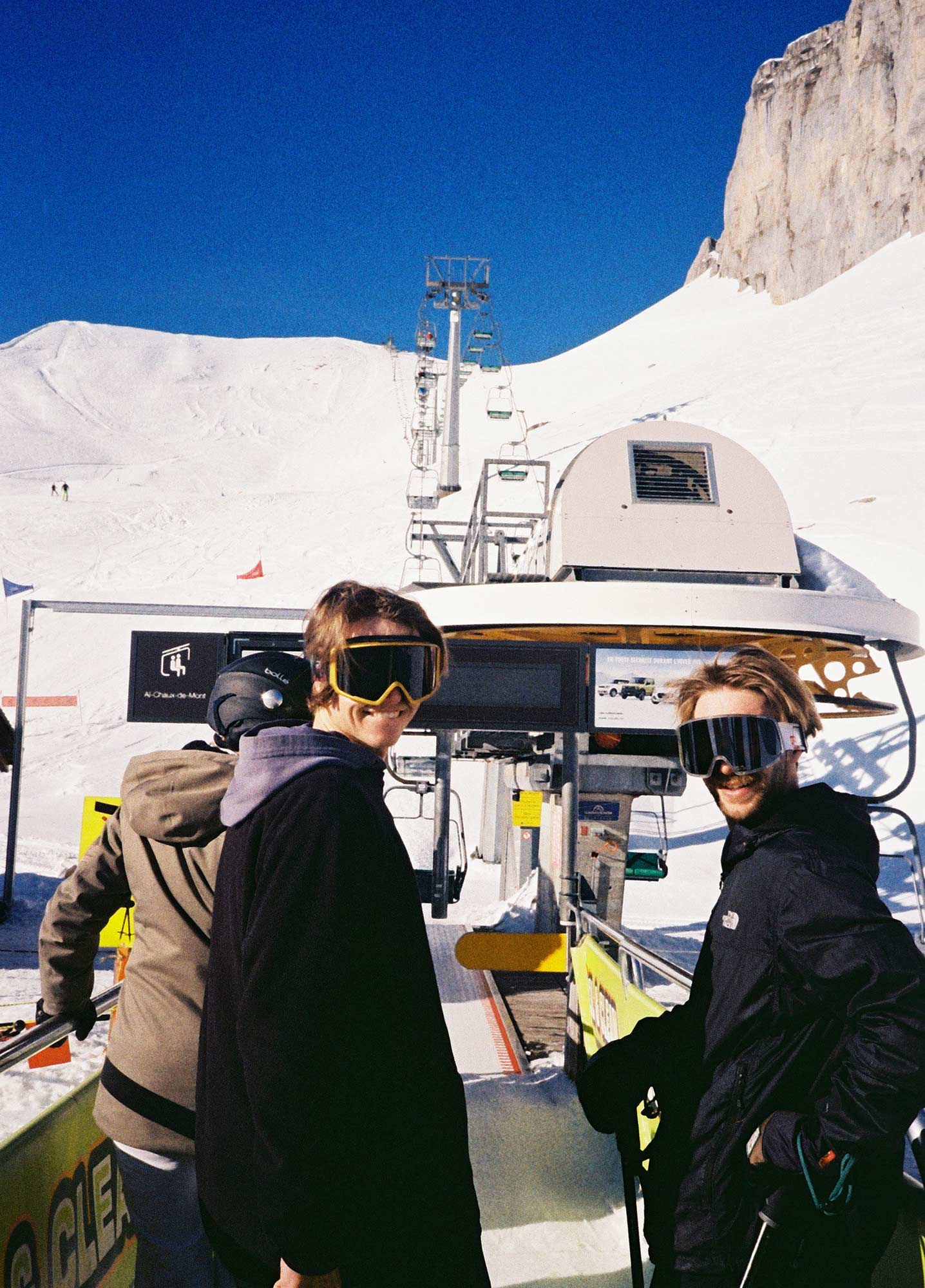 What inspires you?
The emotions. Otherwise, a bunch of riders who rip. All the skiers who are better than us and do more or less the same thing: Kimbo’s guys, the Bunch… earlier there was “Trash Party.” All this guys and crews inspired us a lot in our way of looking at skiing.

Is this your first time at High Five?
No, and we have an funny story to share about last year’s premiere… last year we showed our first real production. The film started, and for a third of the movie there was a huge red cross on the screen. It was a technical problem and so cringey… but this year, it all unfolded great and the audience really liked it, and reacted so well. Then we popped some champagne to celebrate!