Krister Kopala on the approach to the Mallroy, the narrow ramp in the top left of the photo.

This spring saw some of the best ski conditions in recent memory in northern Norway. Local freerider Eivind Aanensen and friends took advantage of the rare conditions to put tracks in places that don’t see them often. Check out the interview and a review of these memorable lines below, then head over to the video section to see Eivind in action. 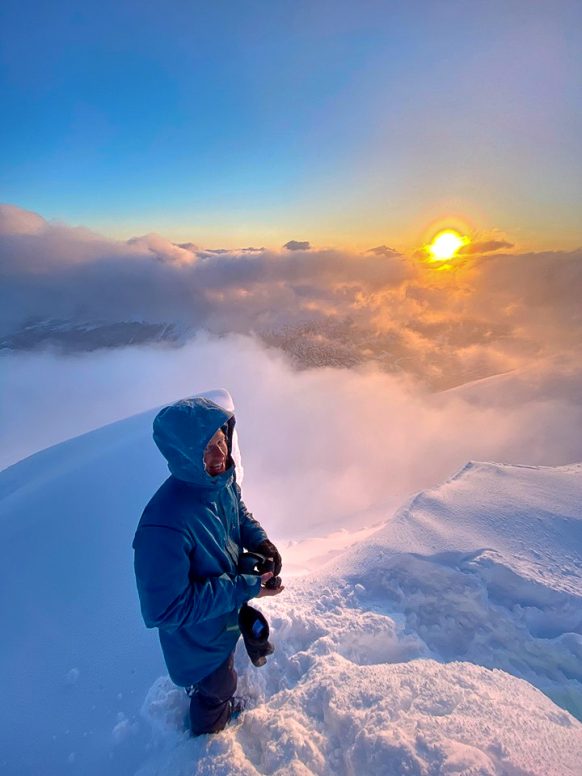 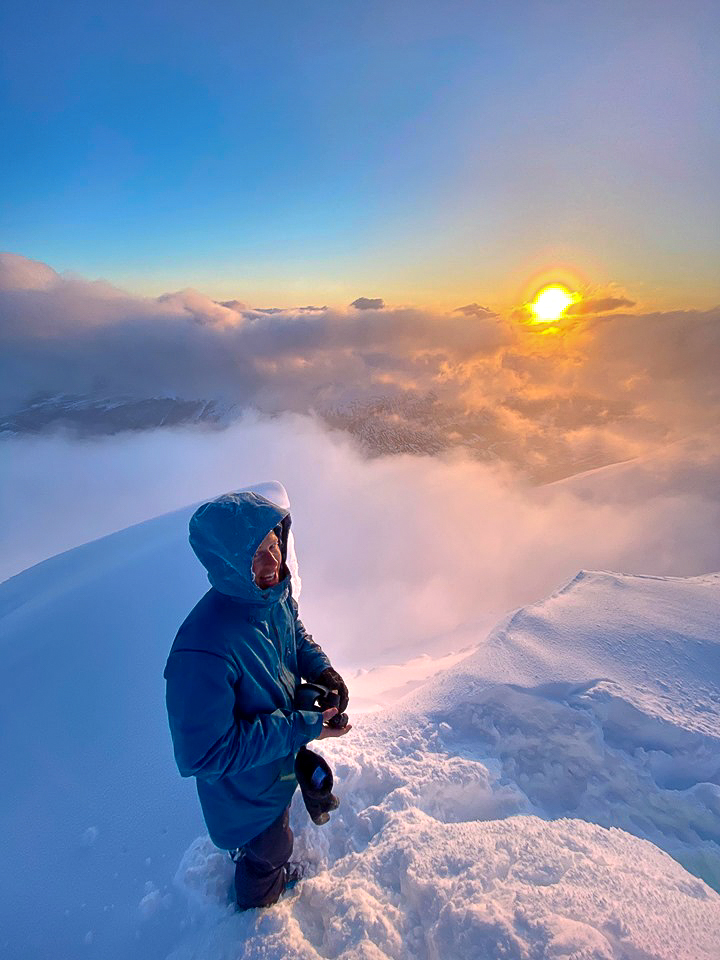 Downdays: We heard about the incredible conditions you had this year. What was the season like?
Eivind Aanensen: With an incredible snow season in northern Norway came the opportunity to ski some of the biggest lines that the Lyngen Alps have to offer. We were lucky to have pretty stable conditions most of the time, because of an almost constant refill of snow and stable temperatures. Unlike many other years, there wasn’t a weak layer in the snow.

Weak layers play a role as the “joker” in the snowpack and it’s hard to know when they might release, meaning it’s hard to know when and where there will be avalanches. Since we didn’t face this problem most of the time during the season, we felt like we could almost pick the lines we wanted to ski. I mean, we still watched the snowpack carefully. But being out almost every day, you get to know the snowpack well. During the spring, wind-transported snow and sun were the main problems. 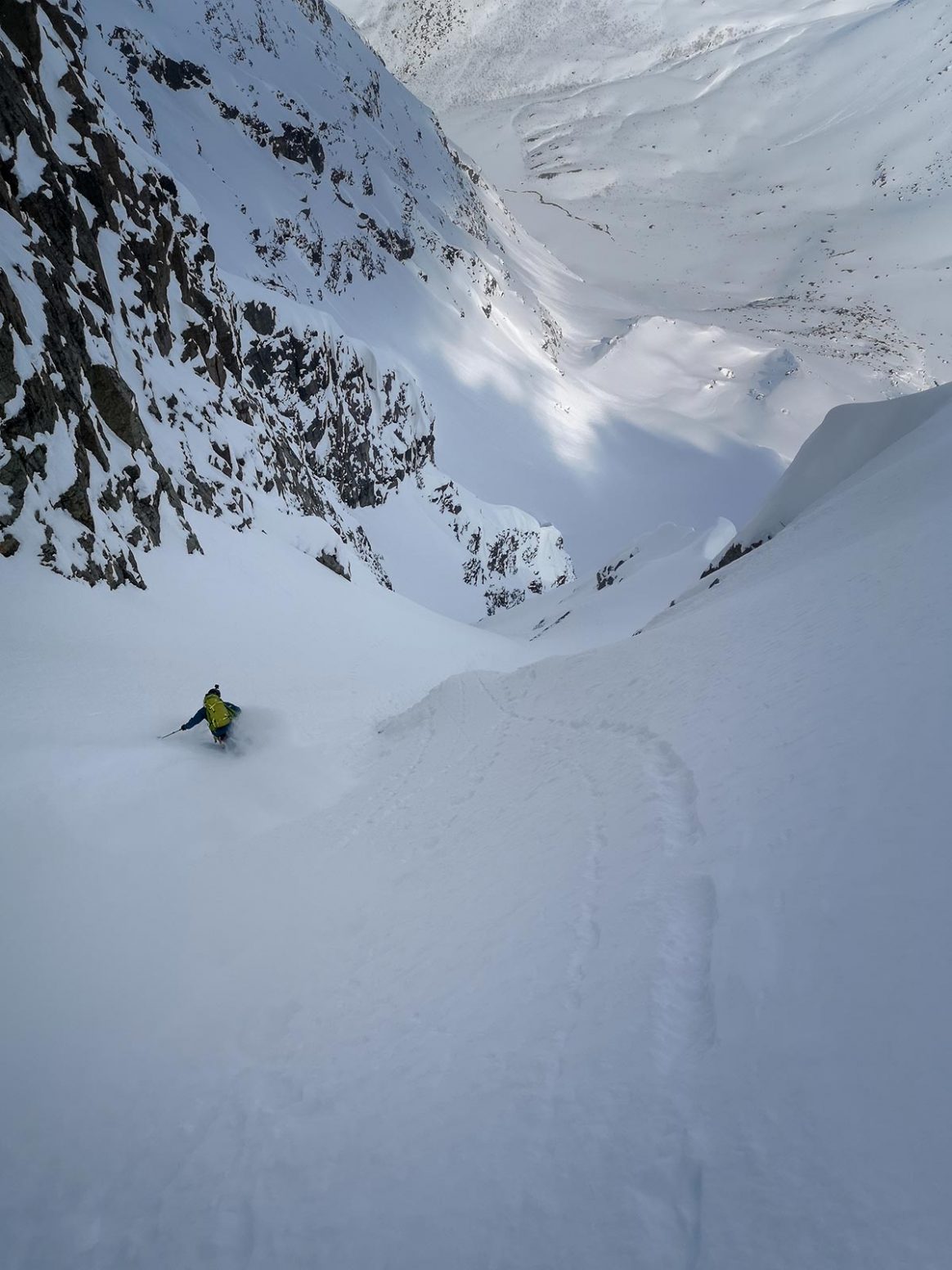 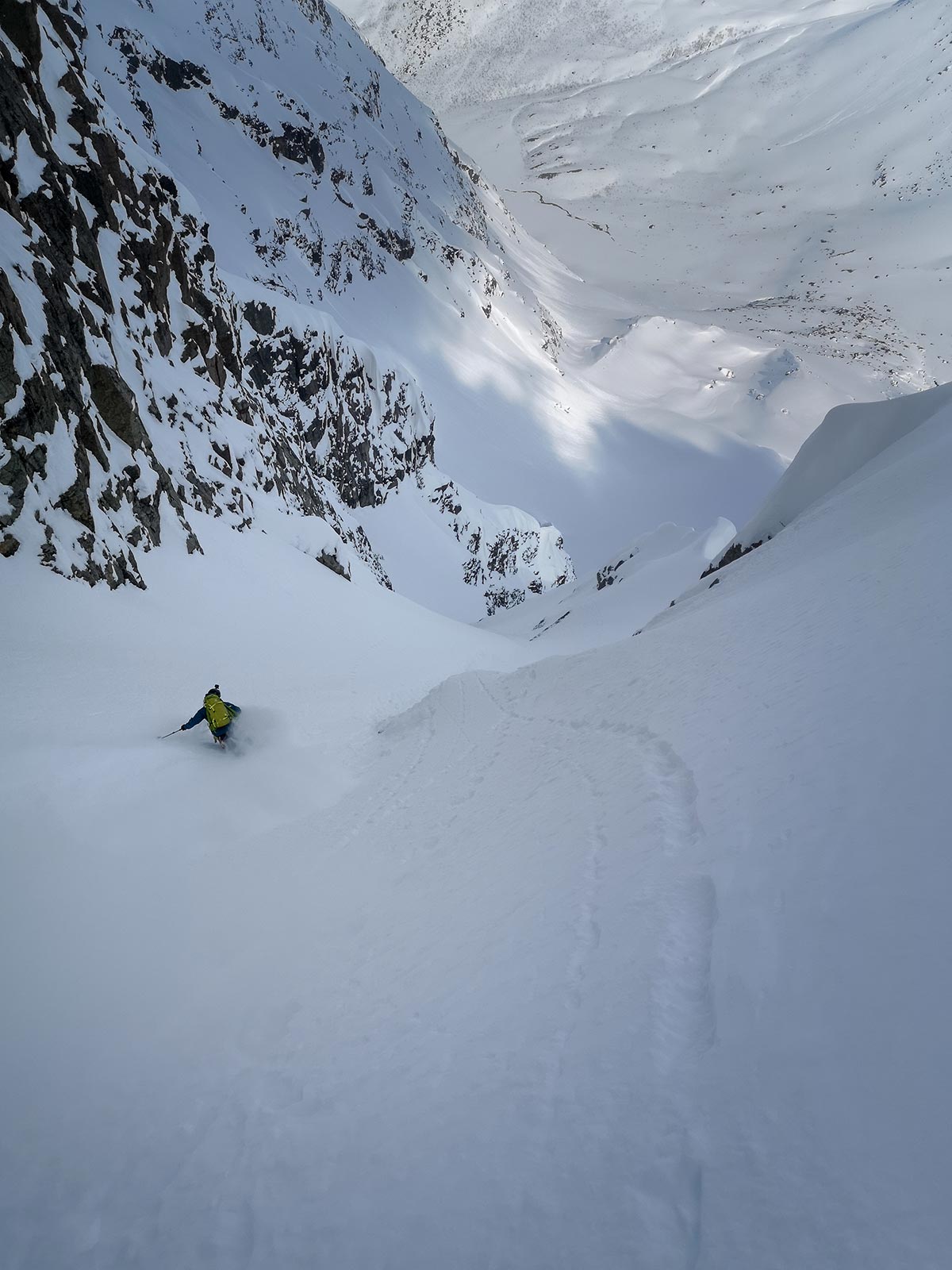 Snow looks good to go in the top section of Ukkonen.

How did you make use of the good conditions?
We skied. A lot. The most memorable days were during the spring with Krister Kopala, Emma Sunnefeldt Nyberg and Eivind Jacobsen. Together we skied some amazing, rarely skied lines. In my opinion, the Lyngen Alps is the best place to be in such conditions. Everywhere you go, you start hiking at sea level and you can reach mountaintops up to 1834masl. Not only do you start at sea level, you have the ocean as your backdrop the whole time. You have every kind of mountain in the area, but the average Lyngen mountain is steep and tall. What makes it even more special is that during the late season, you can ski every minute of the day because of the midnight sun. Actually, most of my time on skis the last spring was during the night.

Let’s talk more about your four big lines. Can you tell us more about each one?

Even though the summit Tomastind itself has “many” visitors every year, the northwest face of the summit doesn’t see tracks every year. The line is about 650 vertical meters, and it’s complex since the first half of the run is a typical bowl shape, and all the snow of a potential avalanche would be transported through the exit couloir. The line isn’t the steepest, but it is definitely one of the more memorable lines that I’ve skied. It’s such a cruisy, long run. 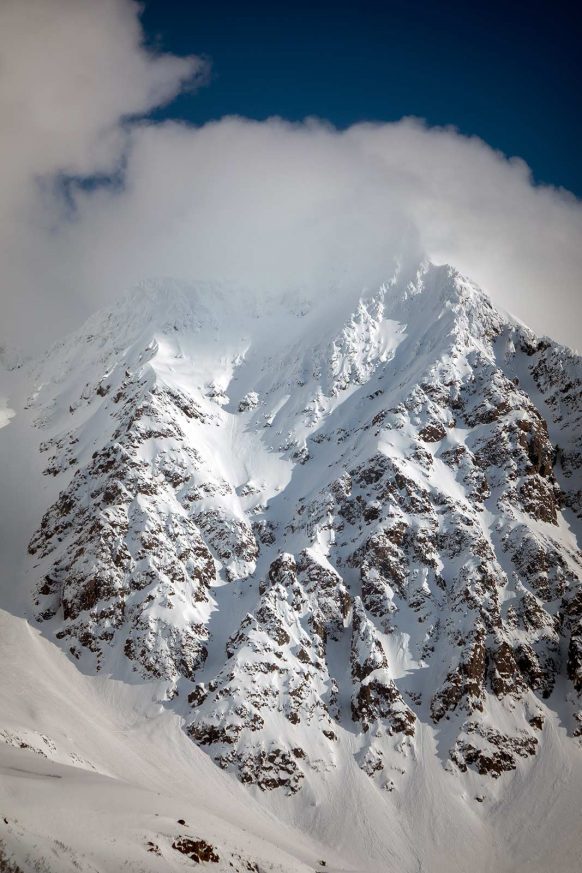 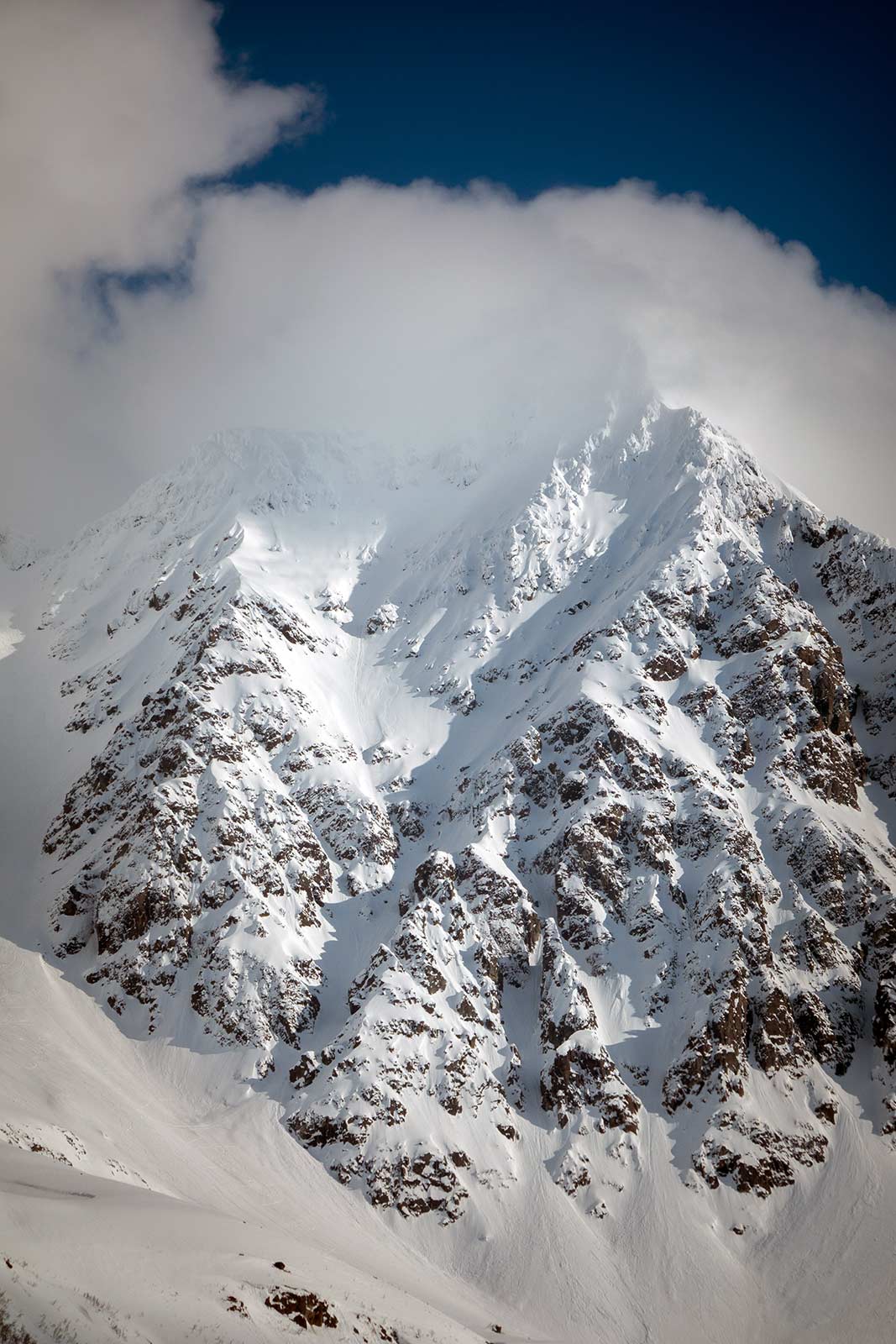 The northwest face of Tomastind. 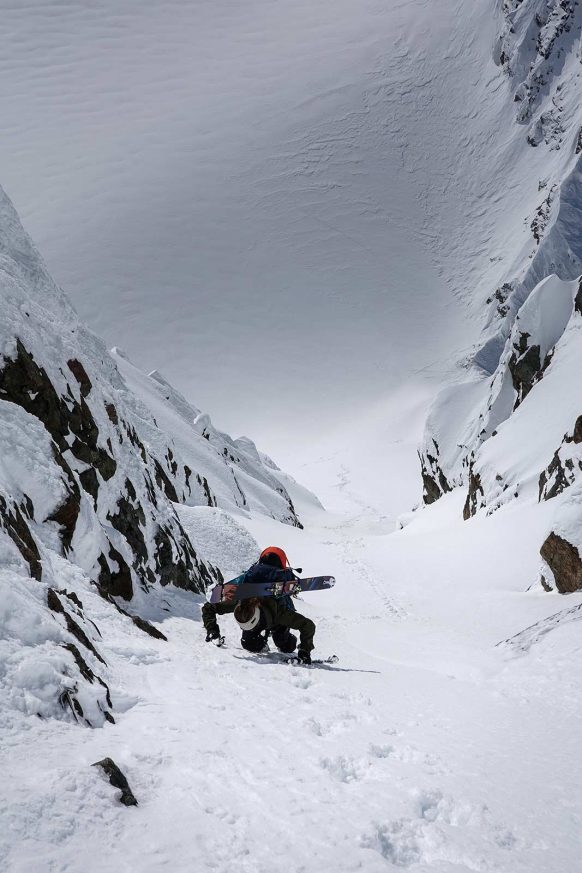 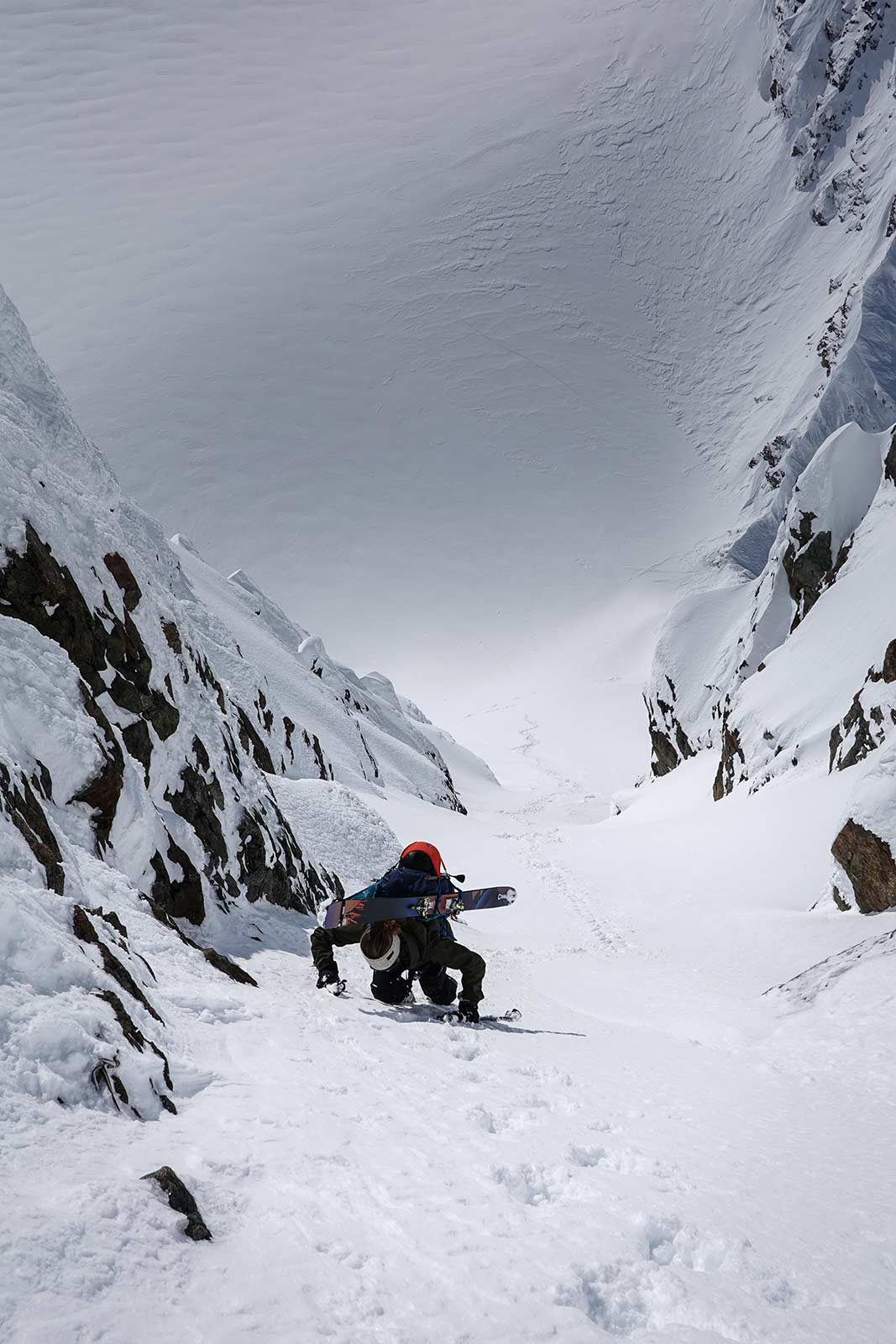 The day Emma and I skied it was our first real date. I took Emma out to ski the south couloir on the summit of Store Lakselvtind (1616masl). I knew that Emma is a really good climber, but what I didn’t know was that she was this good at skiing. After coming down from our first couloir, I quickly decided that we should give the NW face a shot, as she is totally capable of skiing it. We skied from the top, and carefully descended the first 50 meters as we picked a line that was 45-50 degrees. After jump-turning and sidestepping in every kind of snow type that I know, we were ready to ski the fun part of the line. It was an amazing run, and for the record, she said it was the best date she’s been on. 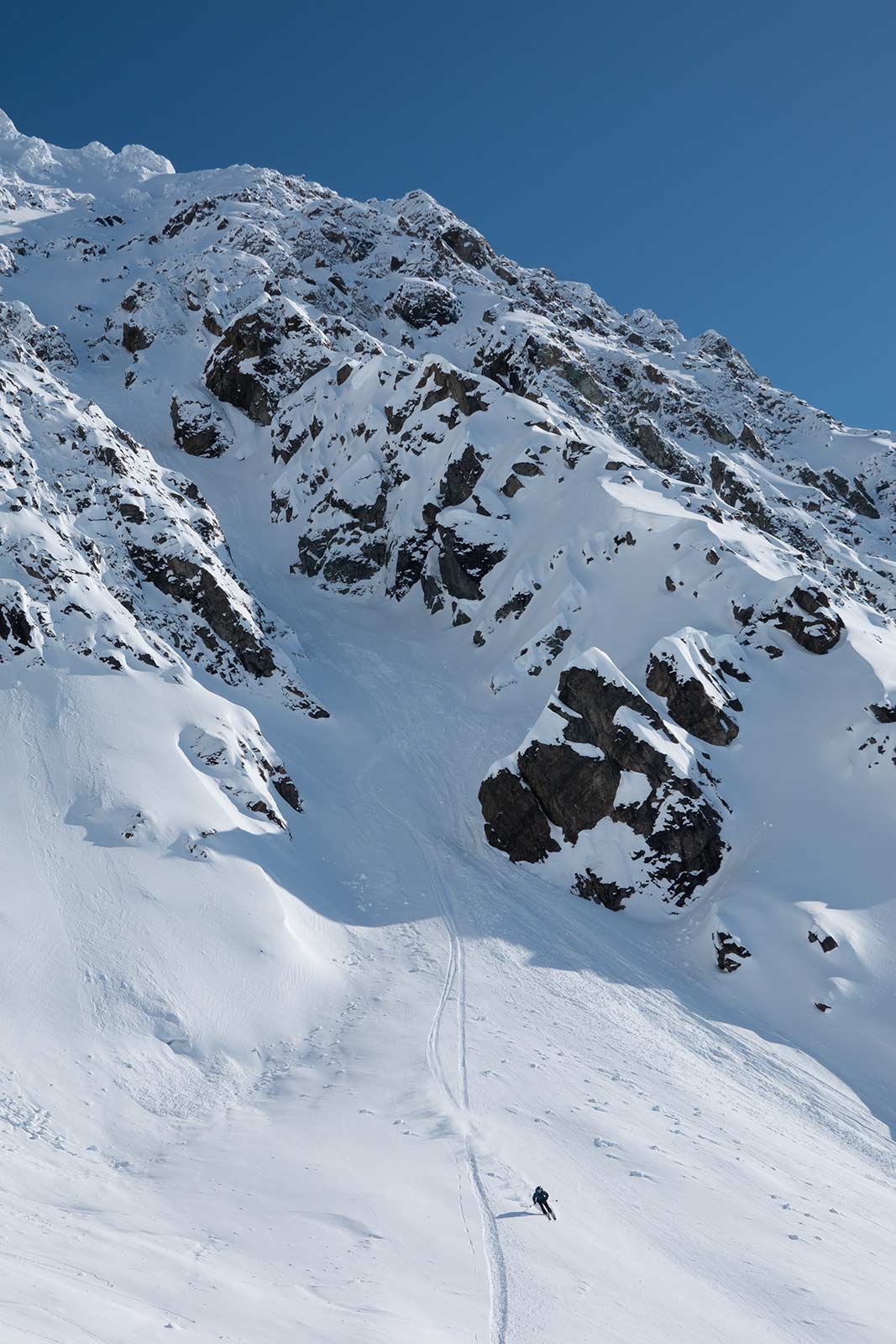 Emma out the exit couloir of Tomastind. How's that for a first date?

Ukkonen is a line located near Lakselvbukt in the Lyngen Alps. The line is around 45 degrees on average, and the steepest section is around 50 degrees. There is one entry rappel and one mid-line rappel. I’ve looked at Ukkonen for several years. The last three years I’ve been in the area a lot, and every time I walked past the line I wondered if it was skiable. It wasn’t until April that Krister and I gave it the first attempt. Sadly we were too late, as the sun started to heat the snowpack way earlier than we expected. 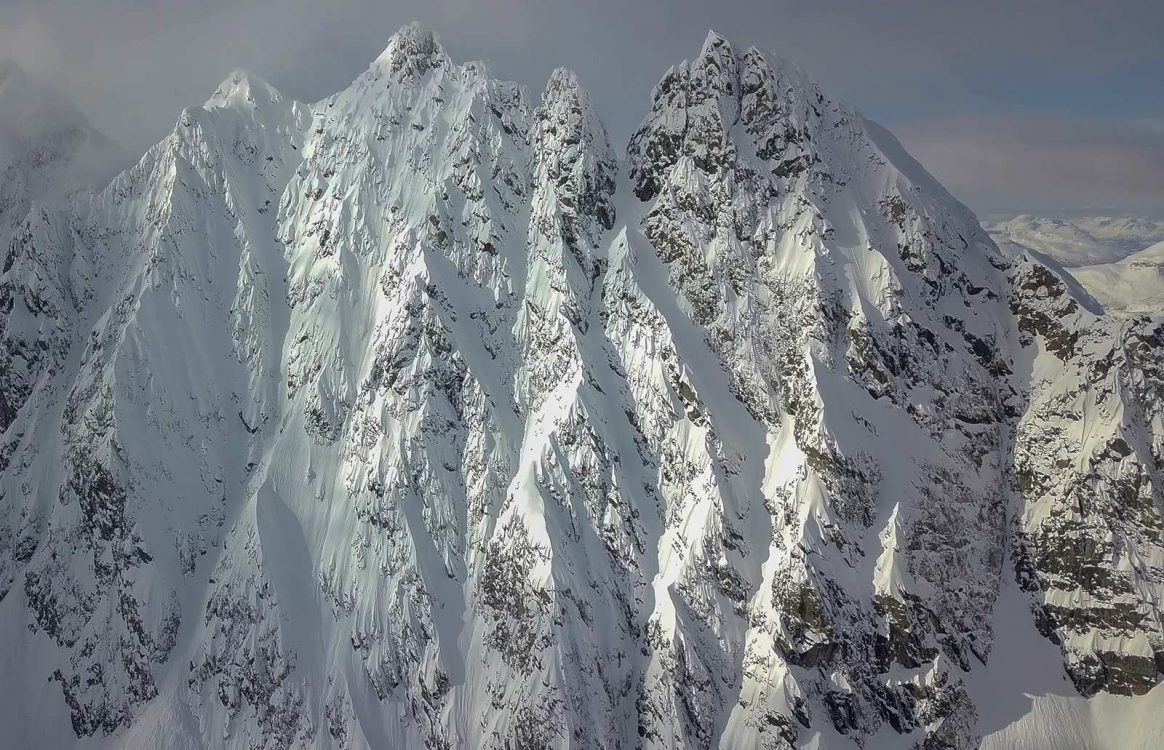 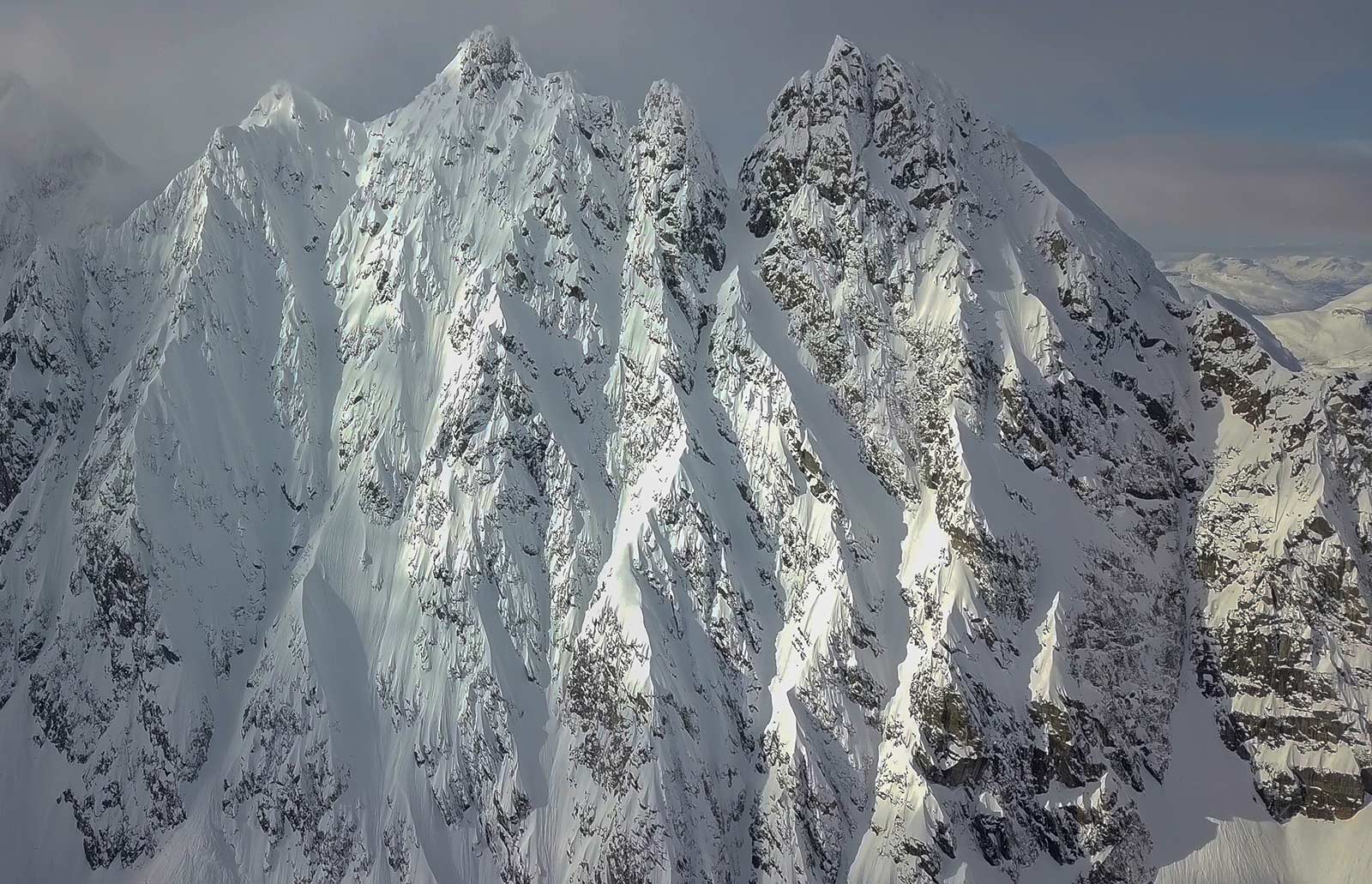 A week or so later we gave it a second go. We started the hike from Lakselvbukt at midnight to be able to ski it at first light. A couple of hours into the hike, Krister didn’t have the right feeling about going up. We stopped a few times and discussed the potential hazard we were facing, both on the way up and down. Even though we couldn’t find any specific reason to not continue hiking, we decided to turn around. If you’re not feeling it, you’re not feeling it. Your head needs to be clear before heading into the unknown. 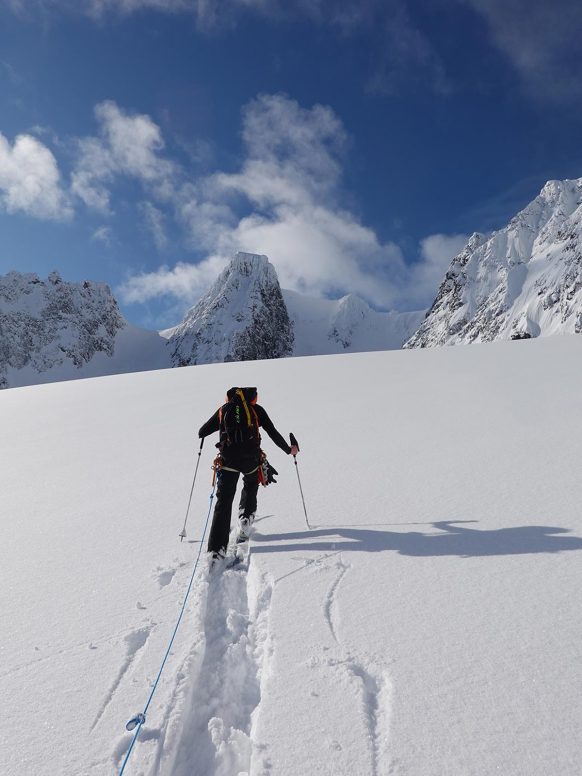 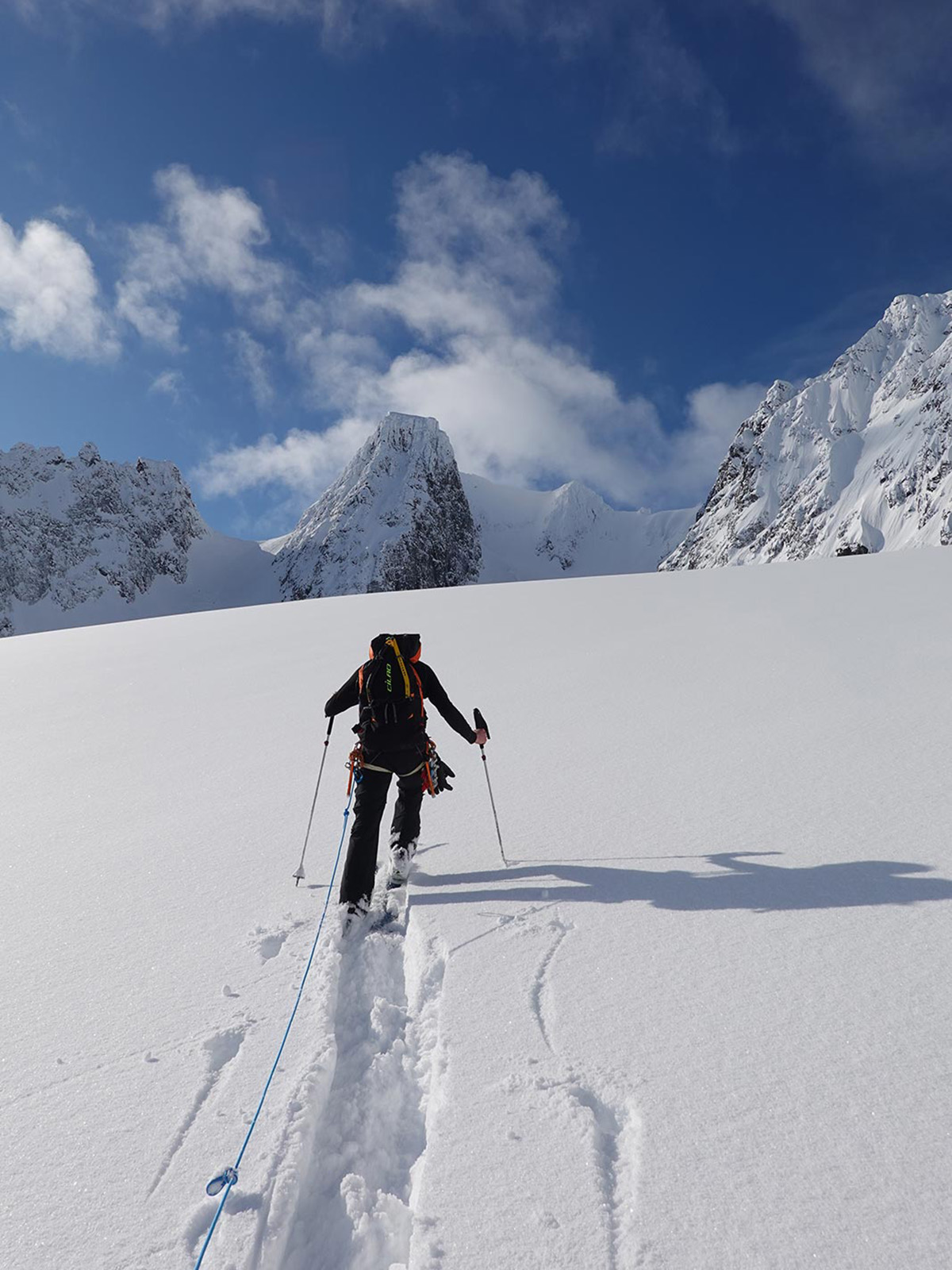 Checking the glacier with Krister on the first attempt at Ukkonen. 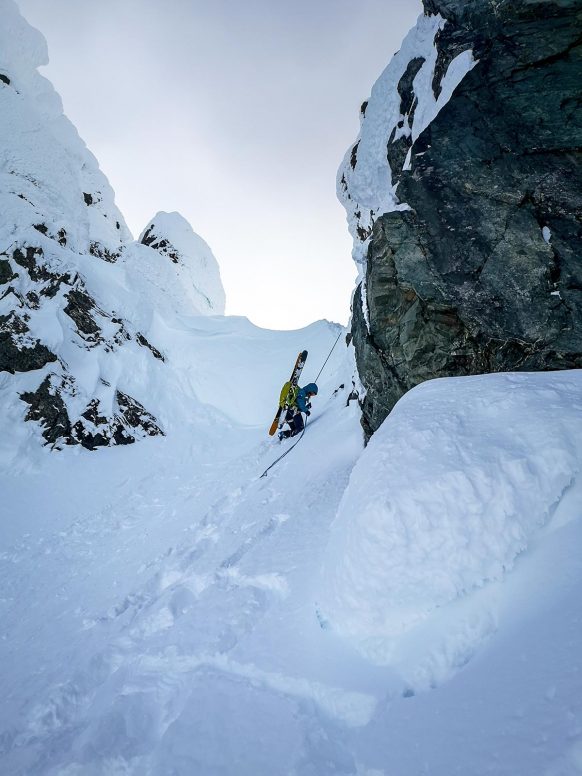 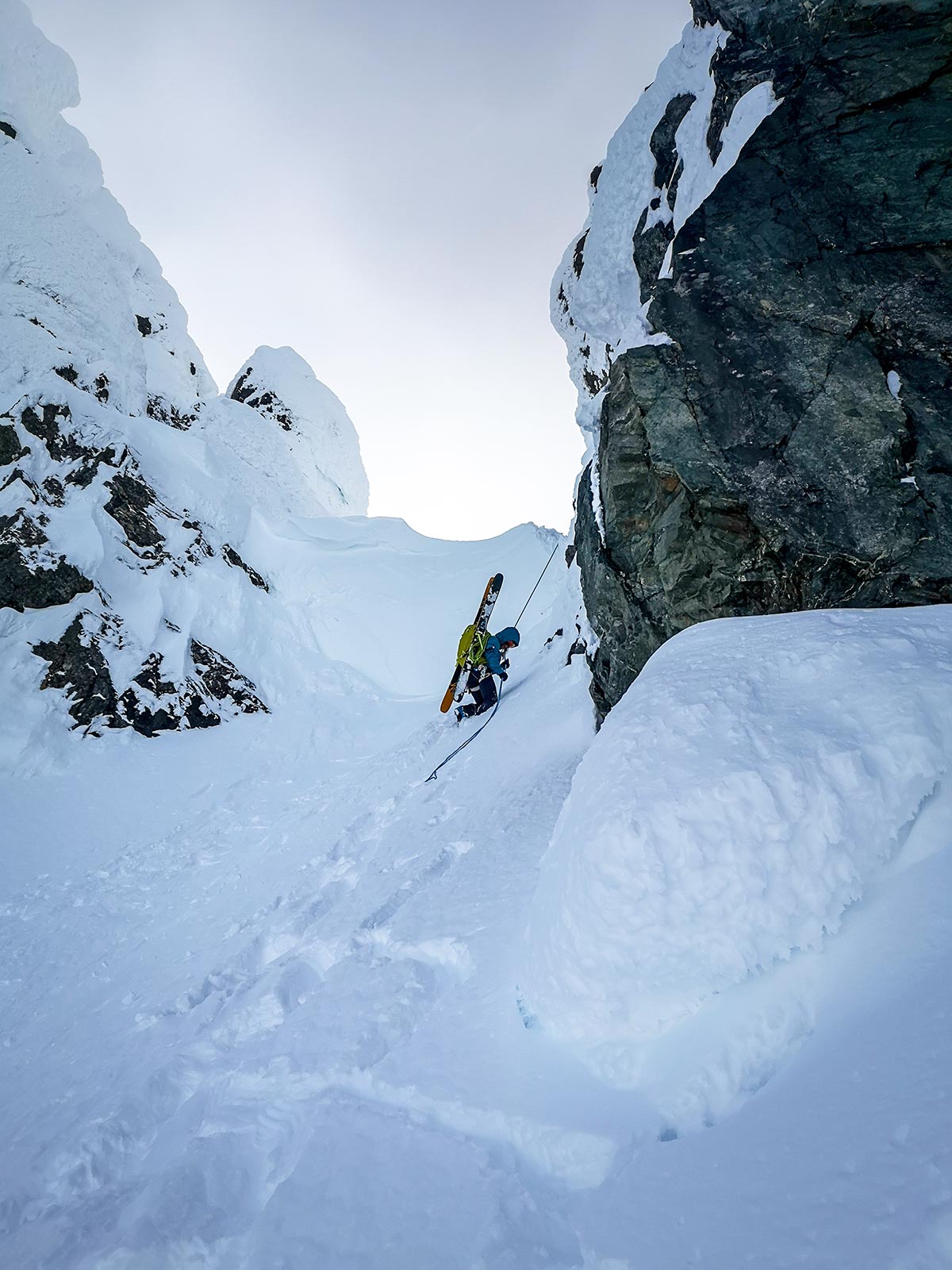 Eivind on the entry rappel of Ukkonen. 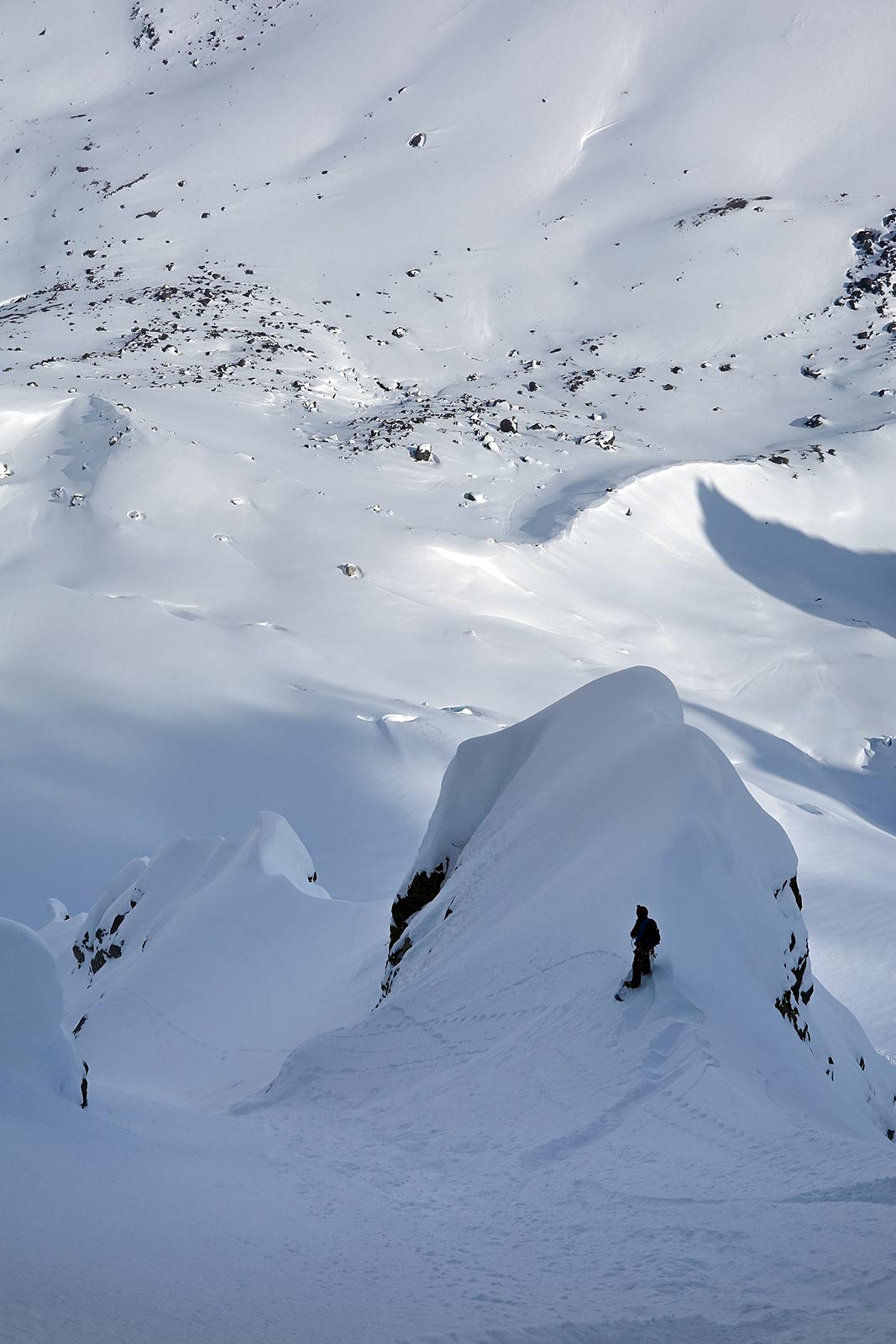 The third attempt, maybe three weeks after the first one, we finally managed to get on top of the line. It was a quite scary feeling, since we knew the first obstacle we would meet was a huge refrigerator of a cornice. There was no easy way to put in any gear to make the rappel, so we spent some minutes discussing how we were going to be able to get into the line. We decided to rope up, and I belayed Krister carefully out on the cornice. He found a spot to put up a good anchor, and we were both stoked on the first glimpse of the line. Since I’d looked at quite a few photos, we knew what we were about to face further down. From here it was pretty much just time to “execute.” 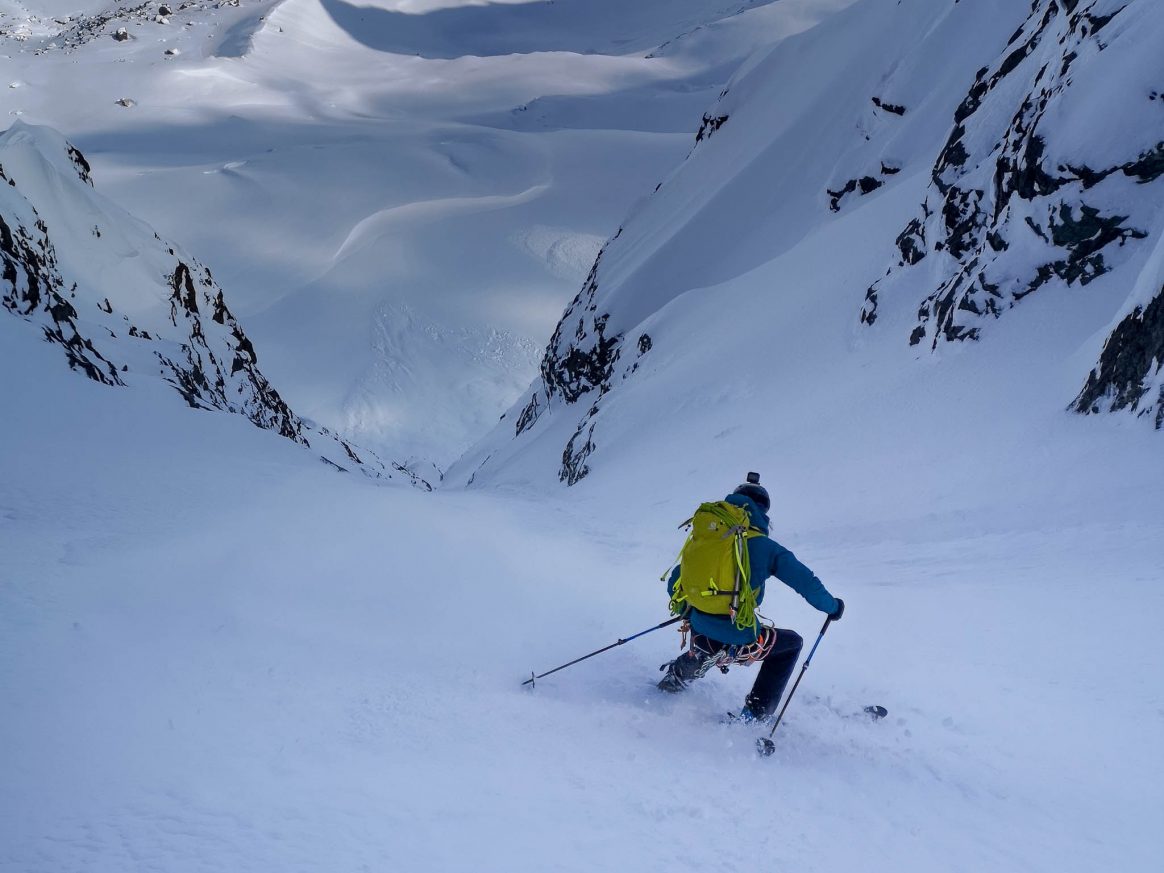 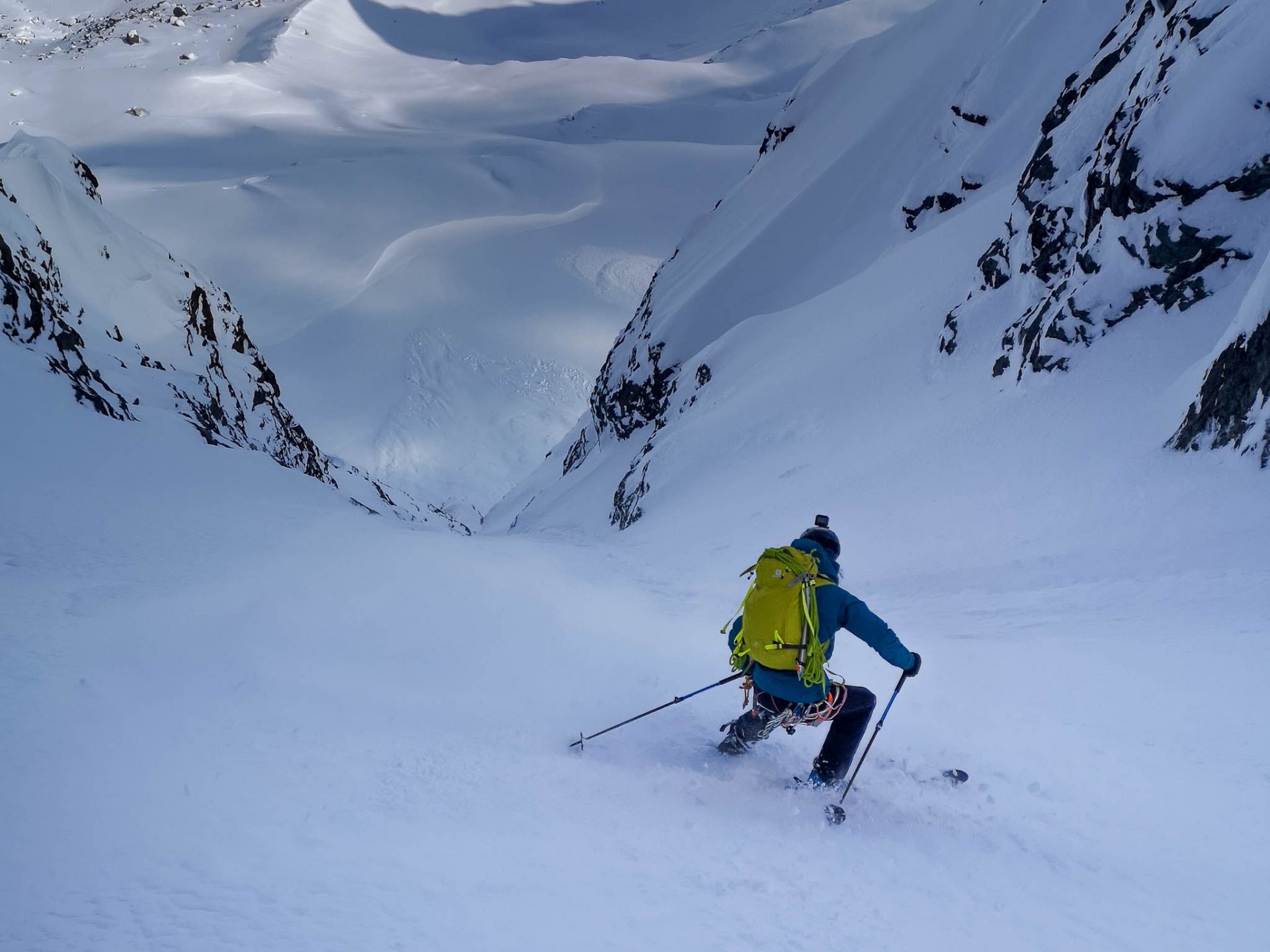 Eivind above the mid rappel.

The east face of Store Russetind is impossible to not recognize when you drive your car through Nordkjosbotn. From the road the line looks really steep, scary and exposed. The east face has a 1200-meter vertical drop and is a no-fall zone almost the whole way down. Since it’s such a long line, it’s hard to get it in good conditions. 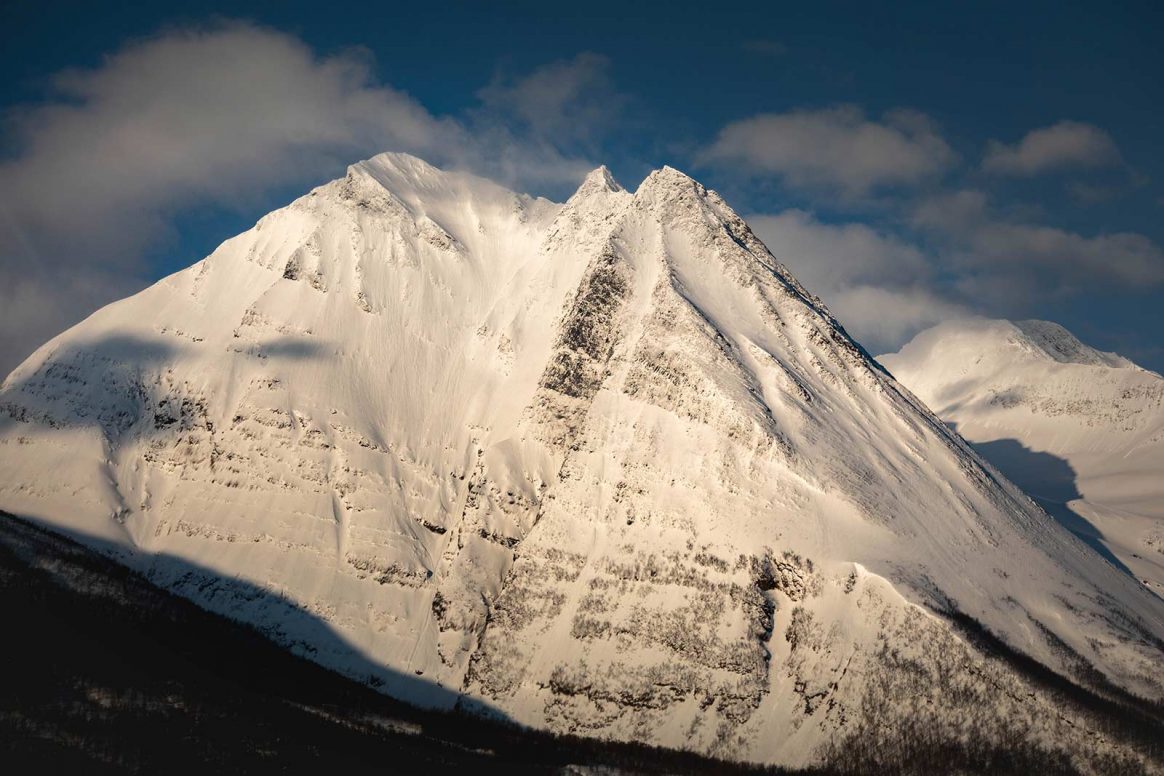 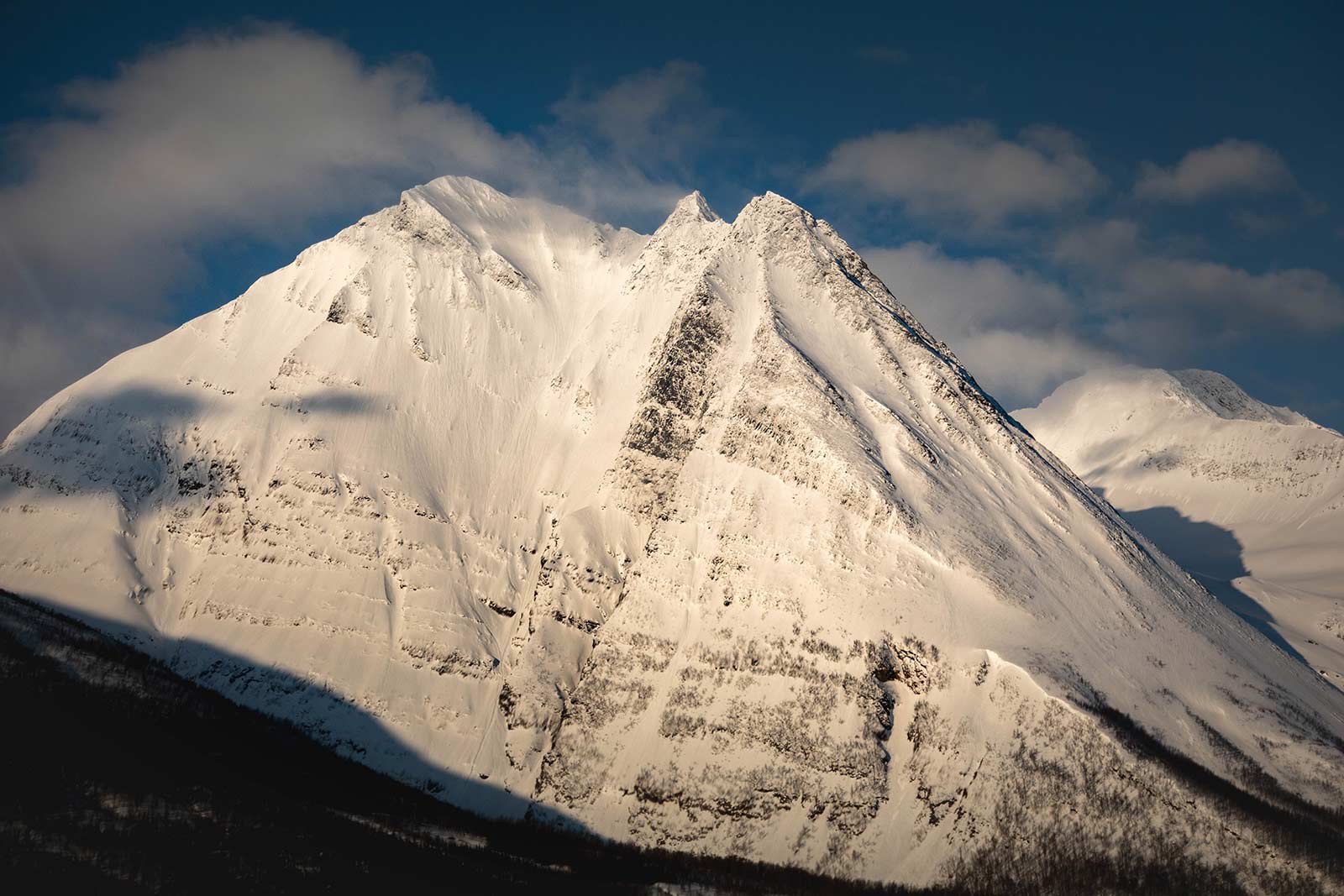 Eivind Jacobsen and I started the hike at 1:30am. The skies were clear, and once we were above the treeline we could turn off our headlamps. An hour or so into the hike, it suddenly got foggy and freezing cold. Luckily Jacobsen had been there before and logged the GPS route on his sport watch. We carefully ascended, walking only on the watch as we could not see more than 1 meter ahead of us. At 03.45 we got to the top, but it was still quite foggy. We realized we would have to wait for a while, so we dug ourself a snowpit to keep warm. In the next hour or an hour and a half we put on our skis many times. It looked like the fog was disappearing, but in fact they were only disappearing for ten seconds. It went like that for quite a while. Suddenly it looked like we would get a weather window that may last for a couple of minutes. We grabbed the chance and the feeling was like we would have to rush down the face in case of whiteout mid-face. 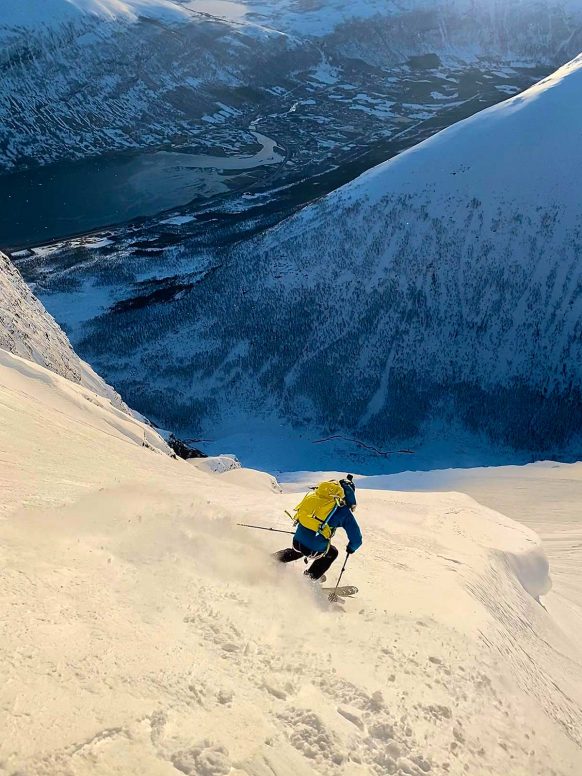 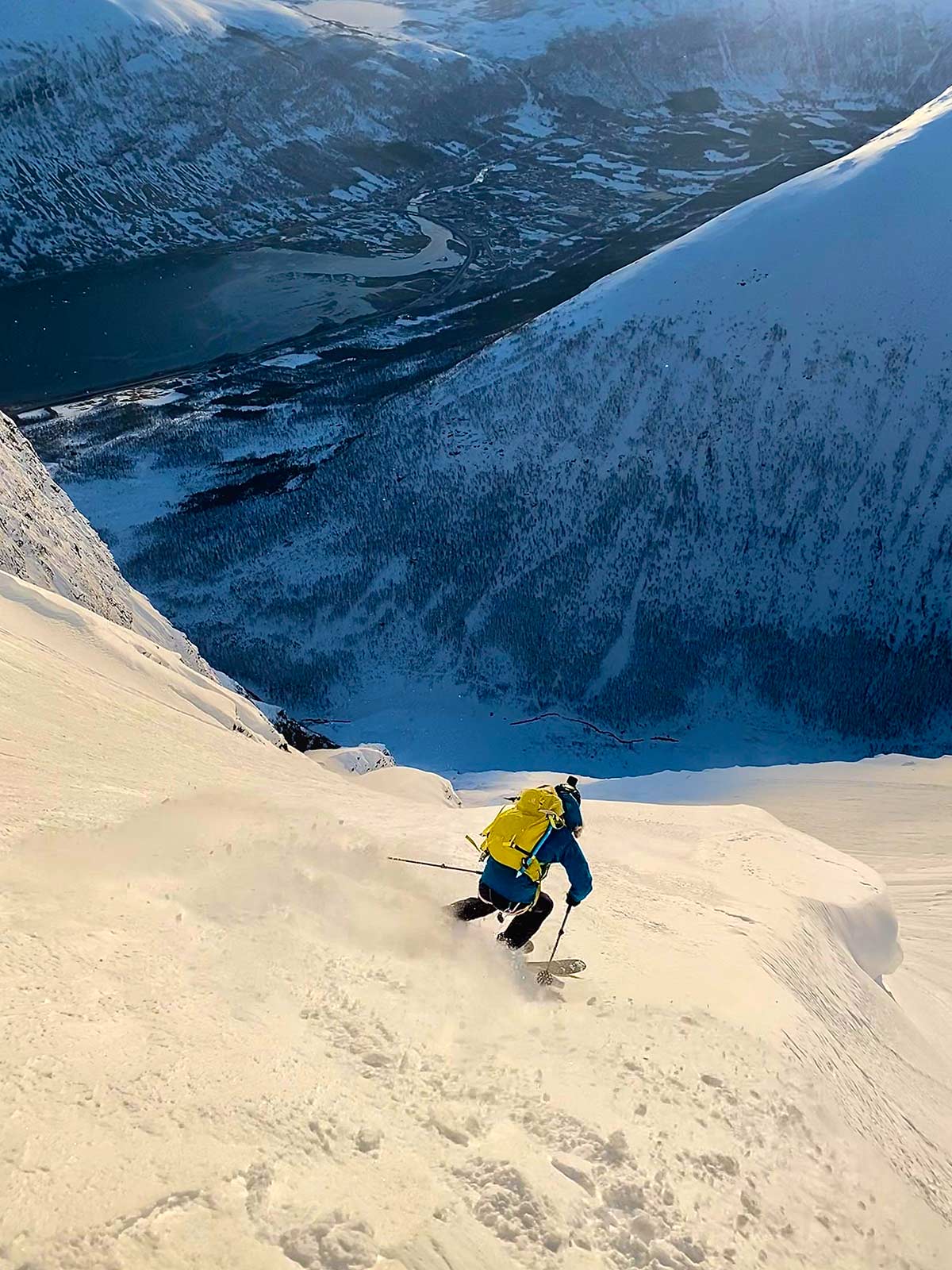 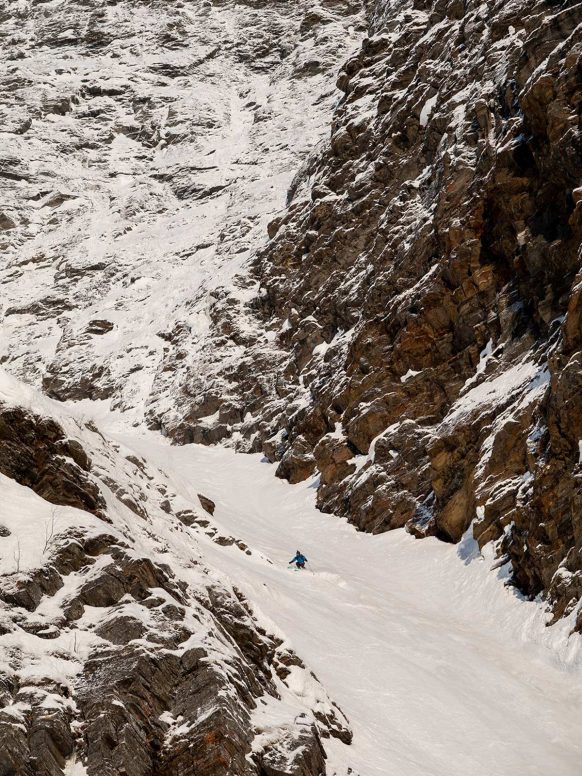 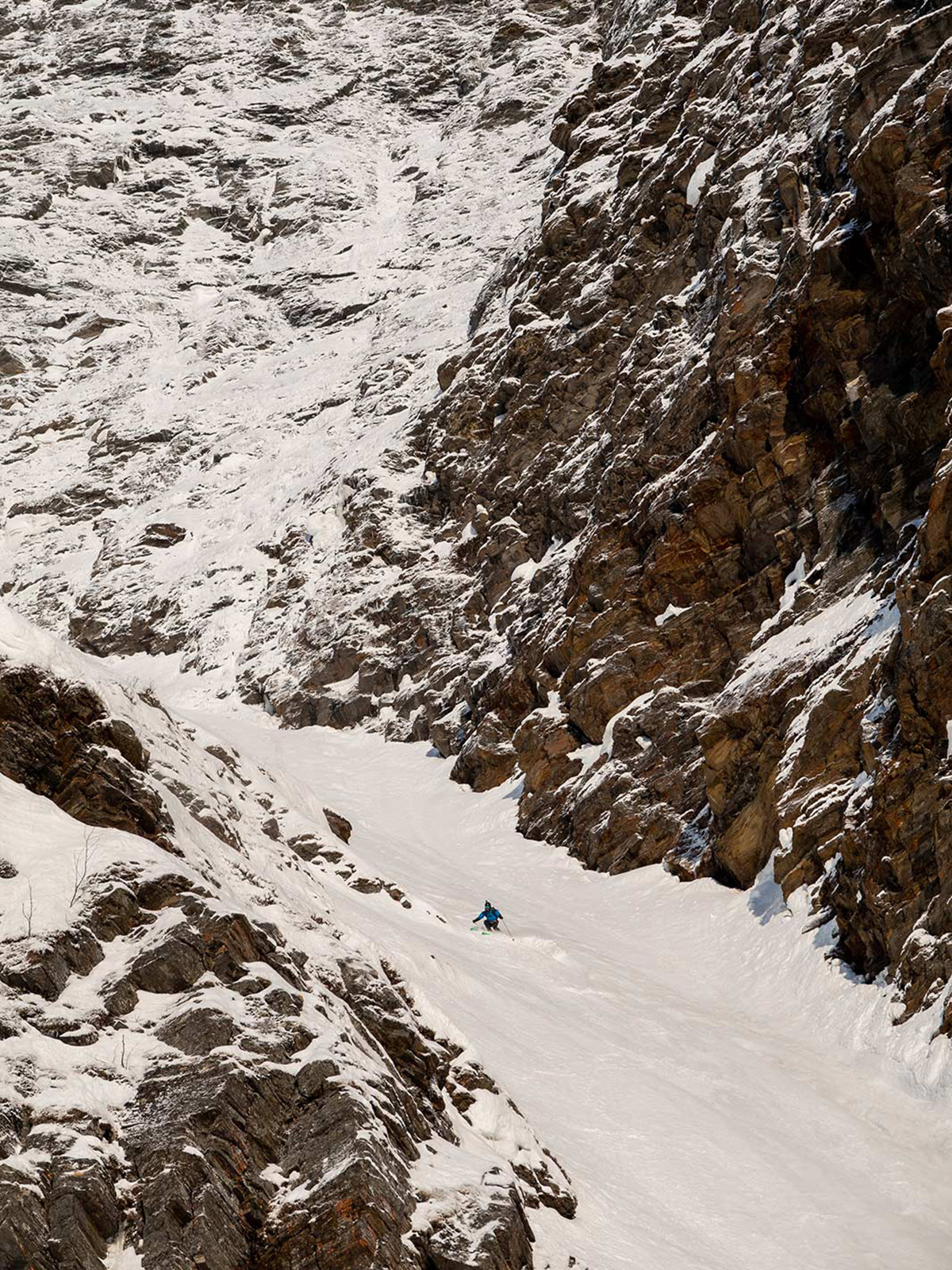 Jacobsen in the exit couloir.

Fransson and Salén skied this line back in 2012. Mallroy, named after its brother Mallory in Chamonix, is an exposed ramp in the middle of Lyngen. If you ever take the ferry between Breivikeidet and Svensby, look south and you will see a thin, steep ramp down from the mountain Stortind. The line hadn’t been repeated since the first descent. 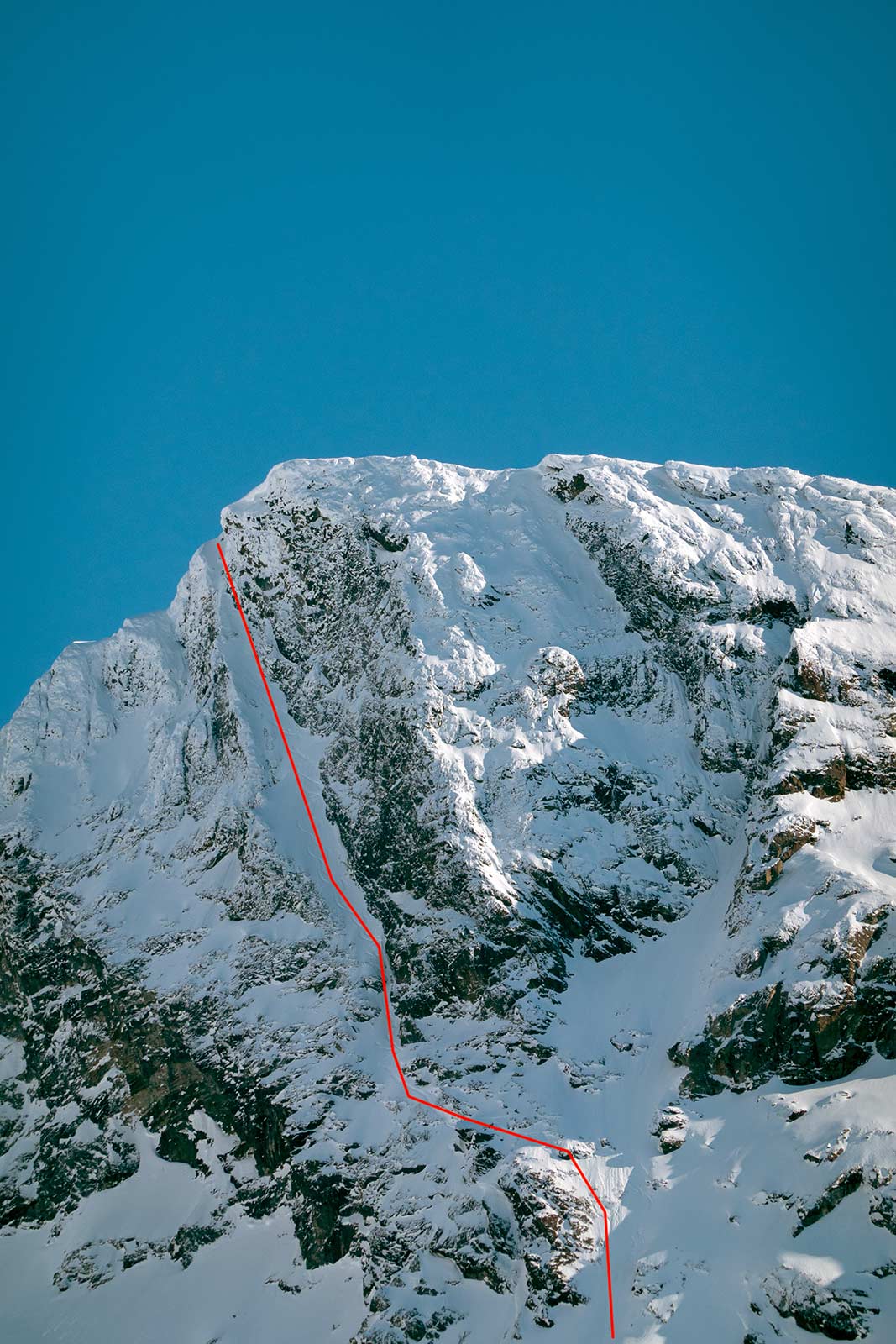 Krister Kopala and I got to the top of Stortind about noon. After watching a video from the first descent the previous day, we were looking for a huge rock so we could build an anchor and navigate to the ramp. The problem was that this year we had an incredible snow season, and there was no rock to belay from. I grabbed my camera to look at the picture we took from below, and it looked like there were cornices everywhere hanging from the top. Kopala and I discussed what to do, and we figured that the only way we were going to get into the line was by cutting out the cornice. We now had to figure out exactly where the entry would be. Since the summit is quite flat, it’s not easy. We couldn’t get a GPS signal from the top, so we would have to navigate using the maps in our heads. We shared the same idea of where the entry would be, which made the approach feel a bit safer. I belayed Krister as he carefully walked out on the cornice. He told me he could see the entry, and we both felt quite relieved. He cut out the cornice, and downclimbed the first ten meters before coming back to the summit to pick up the rest of his gear. It was go time. 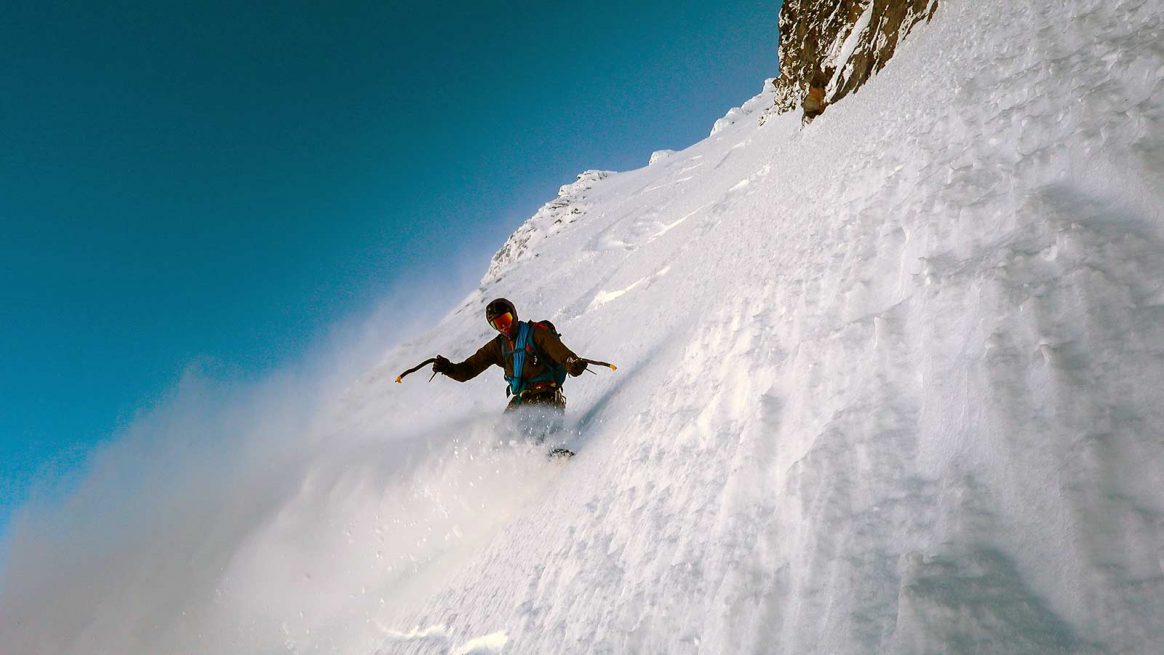 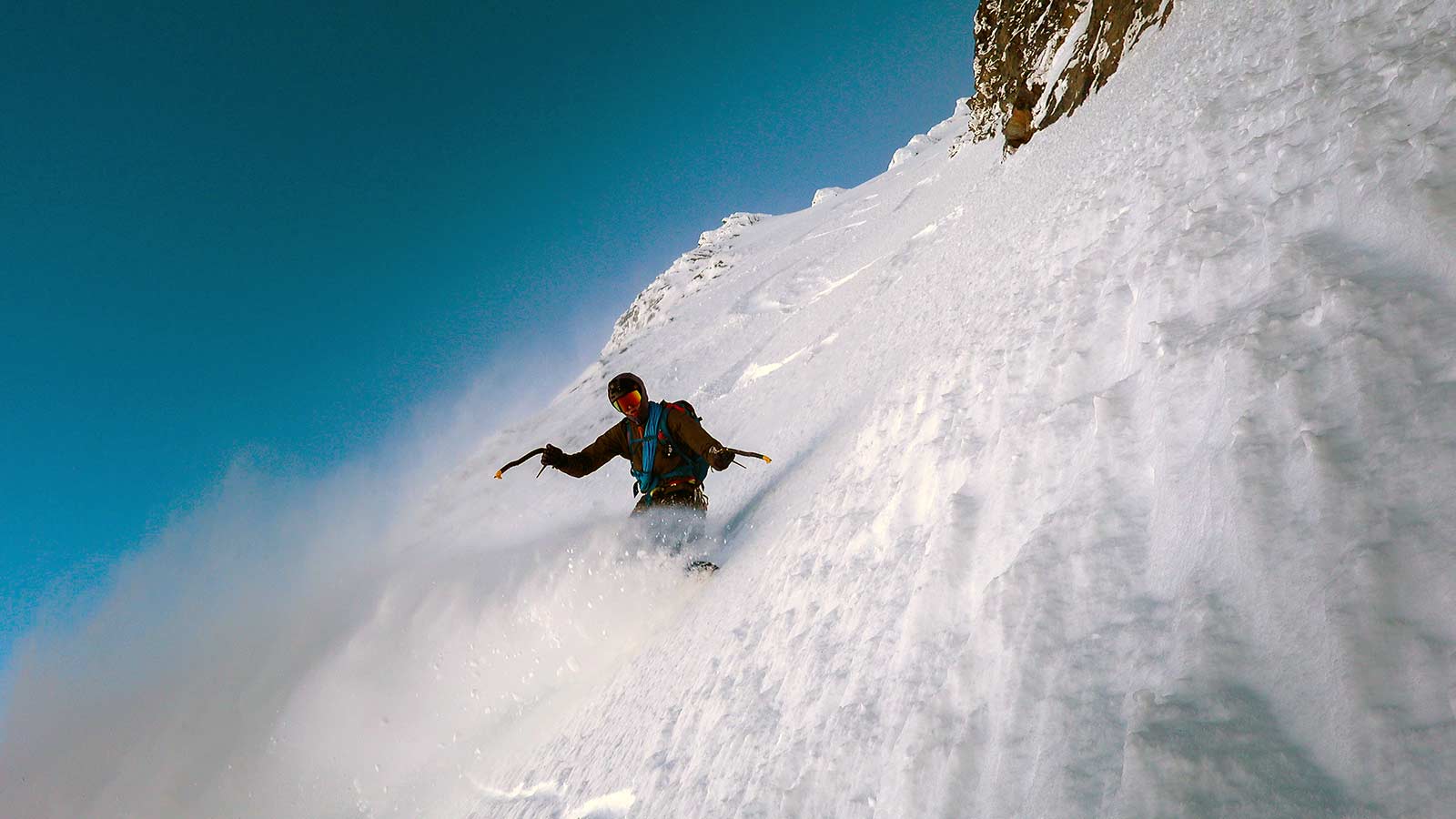 Krister on the main ramp.

We were uncertain whether the steepest and most exposed part of the entry was ice or good snow, so we decided to traverse it using crampons and ice axes. I gotta say, it felt.. airy. Now we were standing at the beginning of the main ramp, and the conditions looked really good. We were just cruising down, sending the sluff over the huge exposure.

When the main ramp starts to narrow, there is a crux where you either have to point the skis, or take them off and downclimb. We knew that there may be thin snow coverage or ice underneath the snow after the choke, but with the high amount of snow we got this season, this was the year to point the skis and descend the rest of the line. You also don’t really want to be in such an exposed area, with overhanging cornices on a sunny day for too long. We decided to go for it, and we were right about that. We descended the rest of the routes with skis on, and as always, it’s kind of a relief to make it down safely.