Hedwig Wessel on her way to her best FWT finish yet. Photo: Jeremy Bernard/FWT

Conditions weren’t looking the best coming into the third stop of the 2019 Tour. The Austrian Alps have seen no shortage of snowfall this winter, but a recent dry, sunny spell resulted in firm, sun-affected snow  on all but the most sheltered slopes. The overnight dusting before the contest could have gone either way, transforming the Wildseeloder face into a powder-filled playground or a variable, wind-loaded minefield. The end result was a happy medium — an even dusting of soft new snow over firmer stuff underneath, what the FWT crowd likes to call “race pow.” 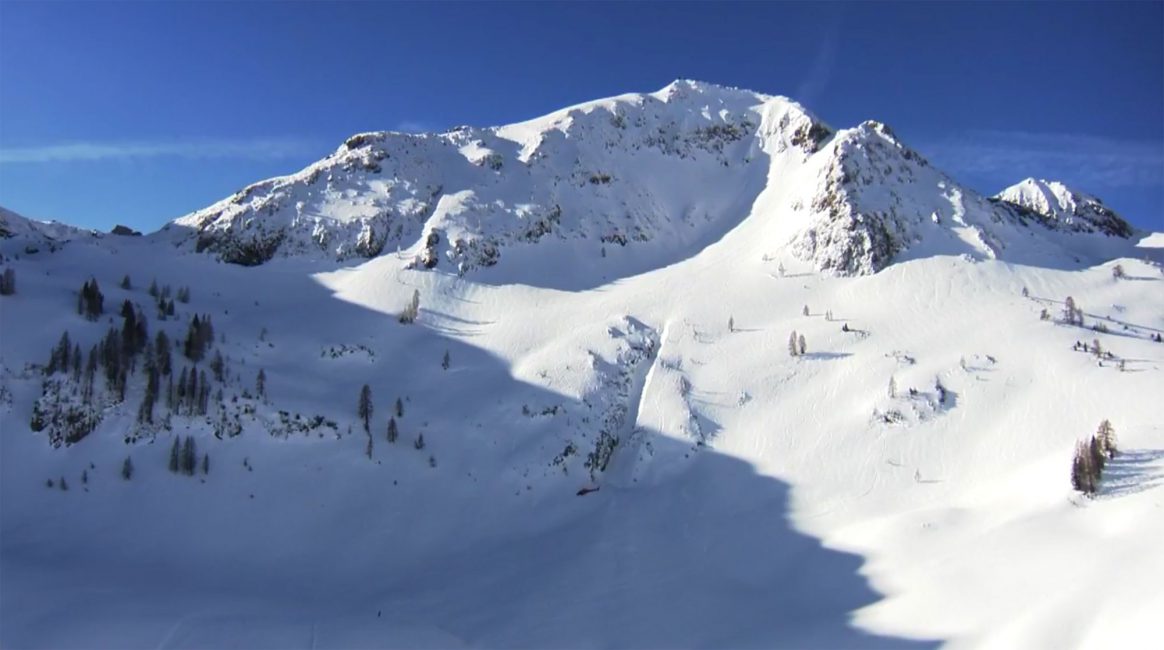 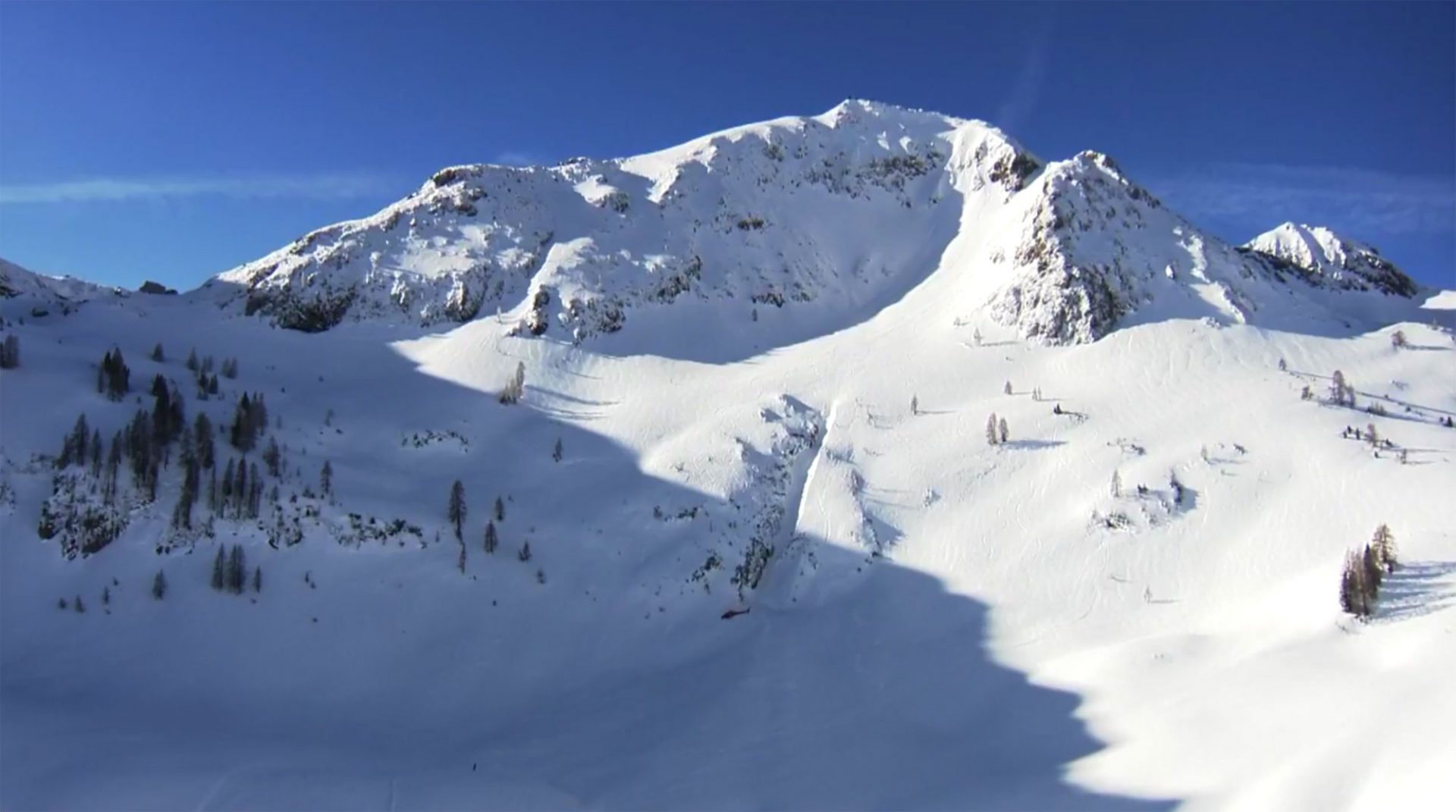 The snowboard men’s contest kicked things off in style with riders bagging fresh, film-worthy lines through the sun-lit, untracked snow to the looker’s right of the venue. French artisan Xavier de le Rue picked up the win with three 360s throughout a masterfully executed line.

Next up, ski men, kicked off with a fast and furious run from Carl Regner, who lined up a huge double drop through the steep central “eagle” portion of the face, and capped off his run with a stomped backflip to set a benchmark score of 78.

Overall leader Markus Eder was up next in his golden leader’s bib, and quickly showed why he was the guys wearing it with a creative run that started looker’s right in the sun, dropping a clean 360 on the same hit as Xavier de la Rue before cutting hard cross-slope for two creative, unhit airs to looker’s left. A massive, stomped backflip in the bottom “trick section” meant Markus had pulled it off yet again, with a score of 92.33 putting him in a solid podium position. 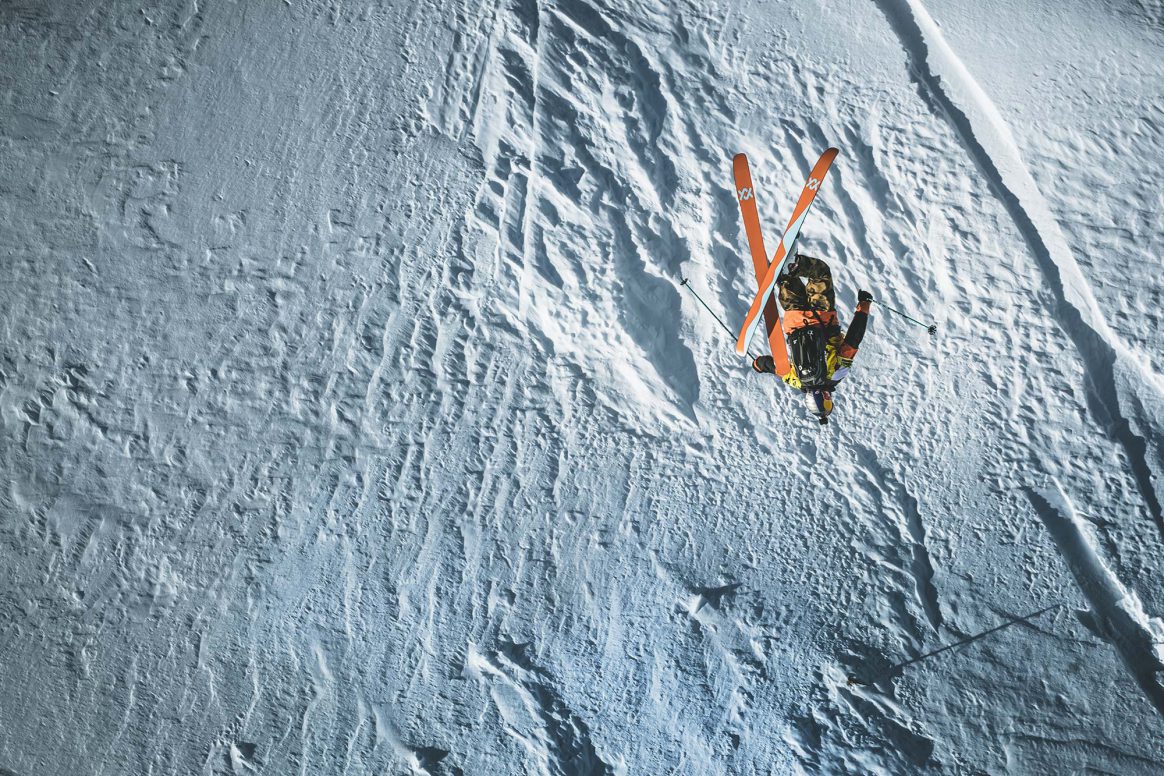 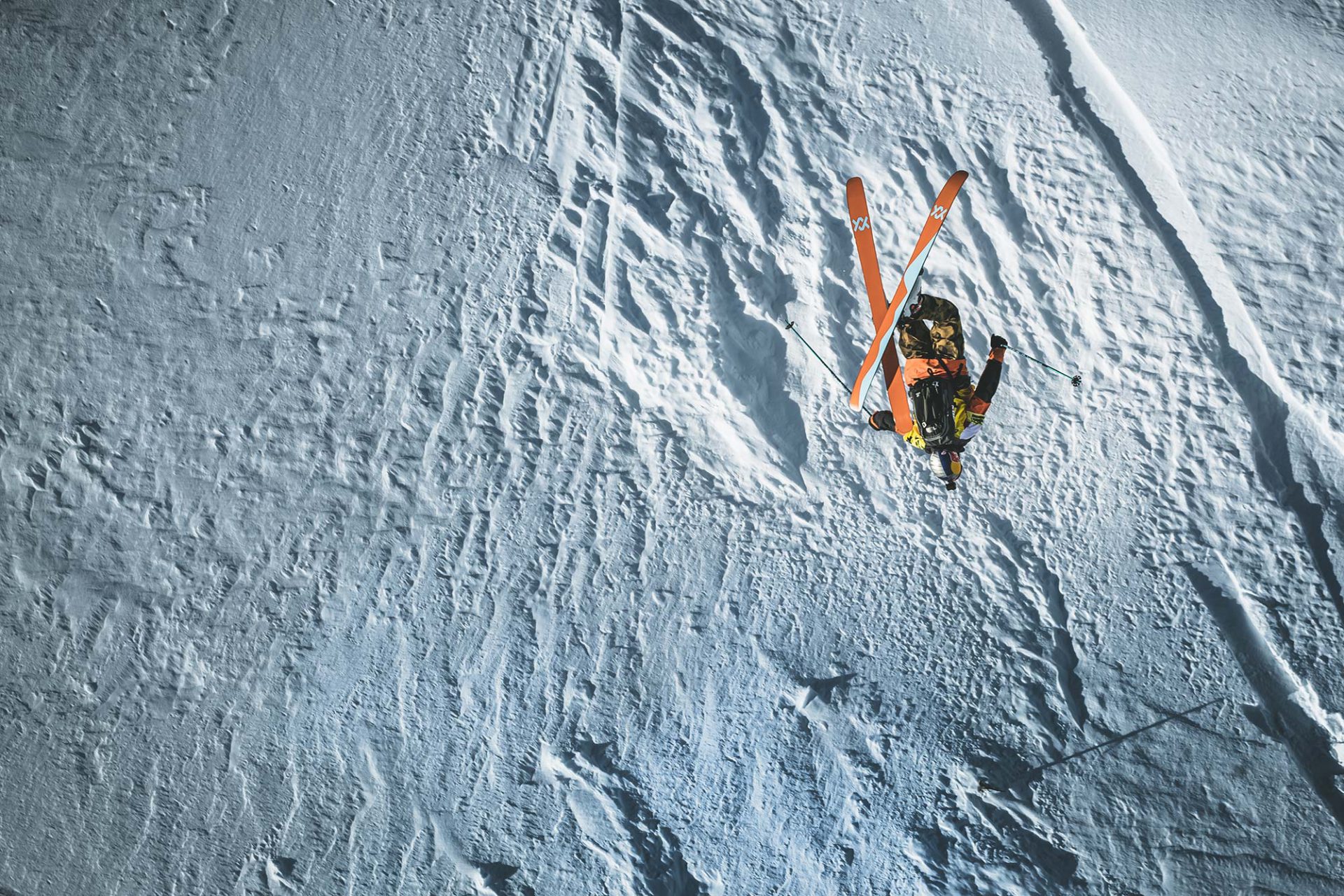 Markus’ riding partner Fabio Studer was in the start gate next, and had a good-looking run going until he lost control after landing a flatspin 360 and tumbled over the final drop on the venue, putting a scary-looking dent in his helmet in the process. Canadian Liam Peiffer followed, snaking his way through the central steeps of the eagle, following Eder’s tracks for a side-slope hit and stomping a clean backflip of his own at the bottom.

Alta, Utah’s Andrew Pollard treated viewers to one of the most fluid runs of the day, flashing the top viewer’s right section with incredible speed and control before bagging two big 360s. Score: 85.33, into second place behind Eder. The next American to drop, Berkeley Patterson came charging out of the state gate looking for a win, stomping one of the biggest drops of the day but lacking the freestyle element and a bit of control. Swedish ace Kristofer Turdell lined up a big double drop through “The Eagle,” fluid to the max, and added a big backflip at the bottom to move into third place. 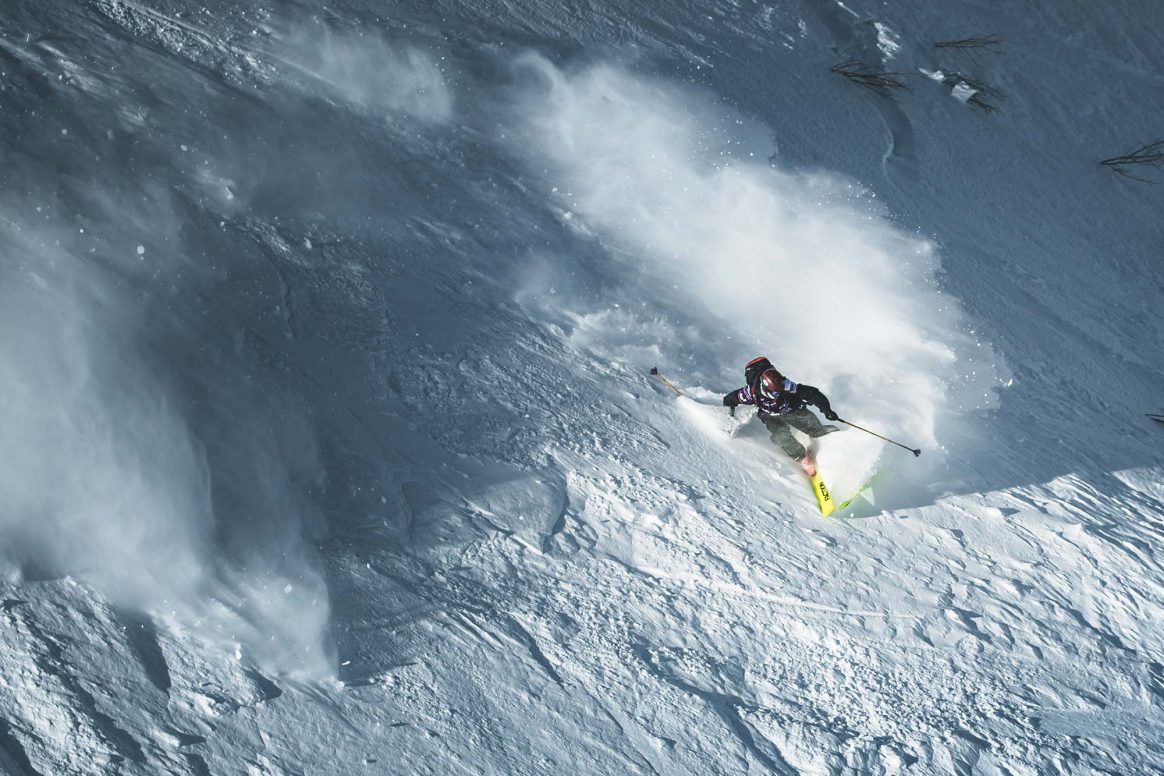 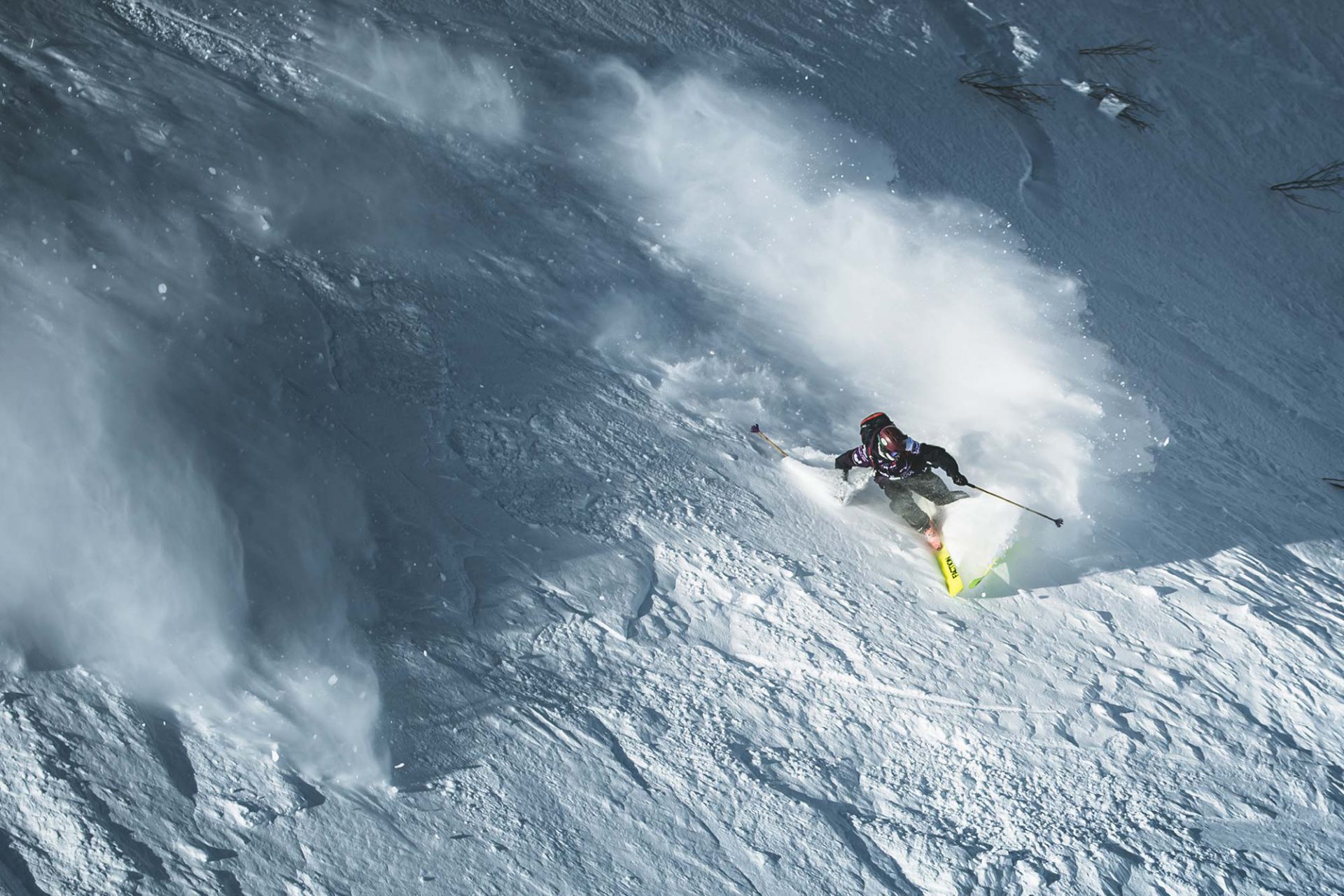 Andrew Pollard put on a show on his way to a second-place finish. Photo: M. Knoll/FWT

After Grifen Moller’s ski got snatched out from underneath him, the next to drop was Drew Tabke, who took the high line to viewer’s right for a memorable, fluid run with big airs — “painting with a different brush” as commentator Neil Williman noted. Next up was the second half of the Peiffer twins, Tom, who ripped an insane double drop through the steeps for one of the balliest moves of the day, but slightly side-checked a big 360 at the bottom to finish just outside the podium with a 79.67.

Craig Murray was up next with the big scare of the day. Gunning hard for a podium, Murray laced a flawless 360 at the start of his run, then charged into a second, massive 360 but misjudged his line, clipped a rock on the landing and tomahawked viciously down the slope. Fortunately, he seemed to escape unscathed, aside from some bangs, bruises and a broken ski. The next two competitors also went down, with Frenchman Yann Dumax-Baudron crashing on one of Eder’s side hits, and Tanner Hall, not looking quite in form today, taking a tumble on a flat 360 at the bottom of the venue.

Wadeck Gorack headed looker’s right into the sun, stomped a clean backflip, skipped some features at the bottom and tossed in a cossack for good measure. Mickael Bimboes flashed the entire venue in the fastest run of the day, straightlining the same chute as Tom Peiffer and adding the same gully gap at the bottom that helped win him last year’s event. This time around, he landed just outside the podium in fourth.

With four riders left in the field, Reine Barkered looked to lay down a classic hard-charging freeride run, but got tangled up on a traverse and took an uncharacteristic fall. Japan’s Yu Sasake picked his way through the steeps, landed a backflip, and was rewarded with a birthday cake at the finish. Spain’s Aymar Navarro dedicated his run to his fallen friend Jeli Bossman, who died in an avalanche in their home resort of Baqueria in January, muscled his way through the same high-speed double drop as Barkered and Peiffer and skied out the lower chute to bag a top-ten run. The last rider in the men’s ski field, Leo Slemett opened up a creative, sketchy and high-consequence double drop in the Eagle, then cut hard looker’s left for a highly creative run and a backflip at the bottom to seal the deal. With a line score through the roof, Slemett slid into third place, bumping Turdell off the podium. 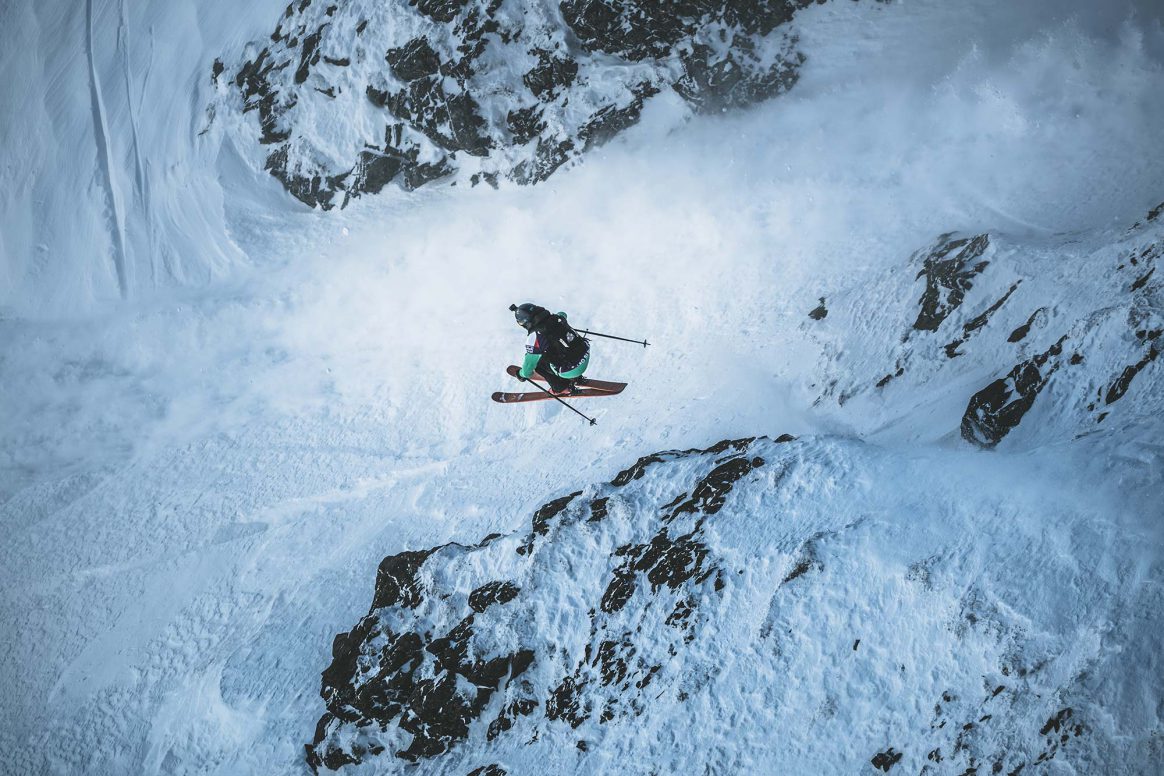 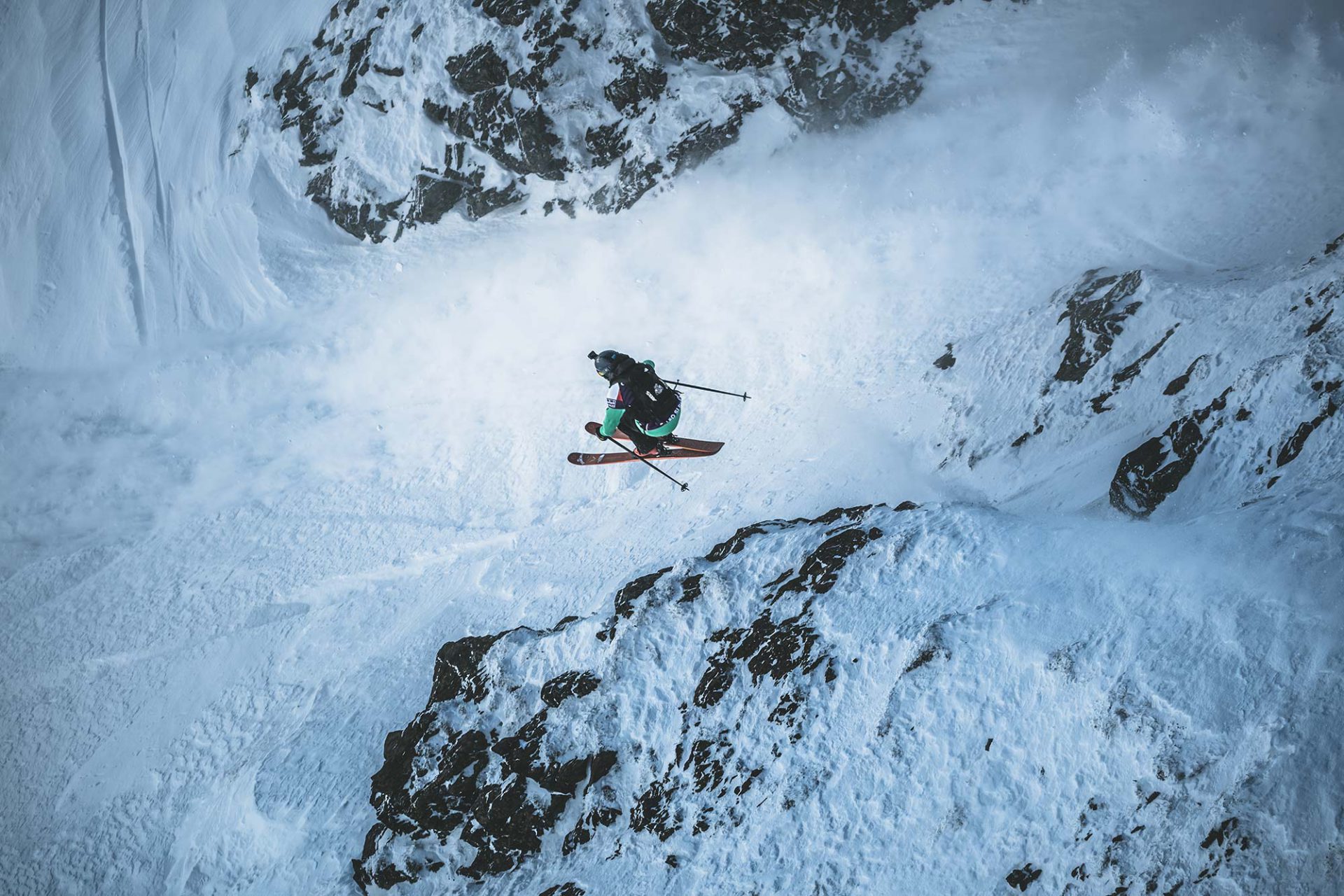 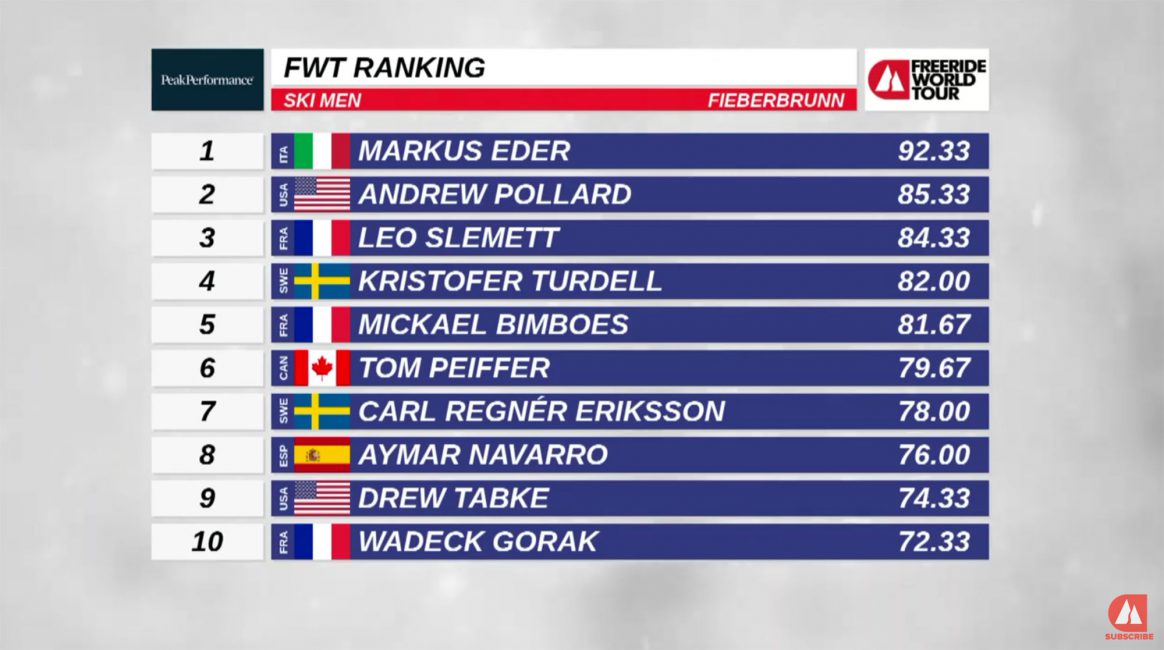 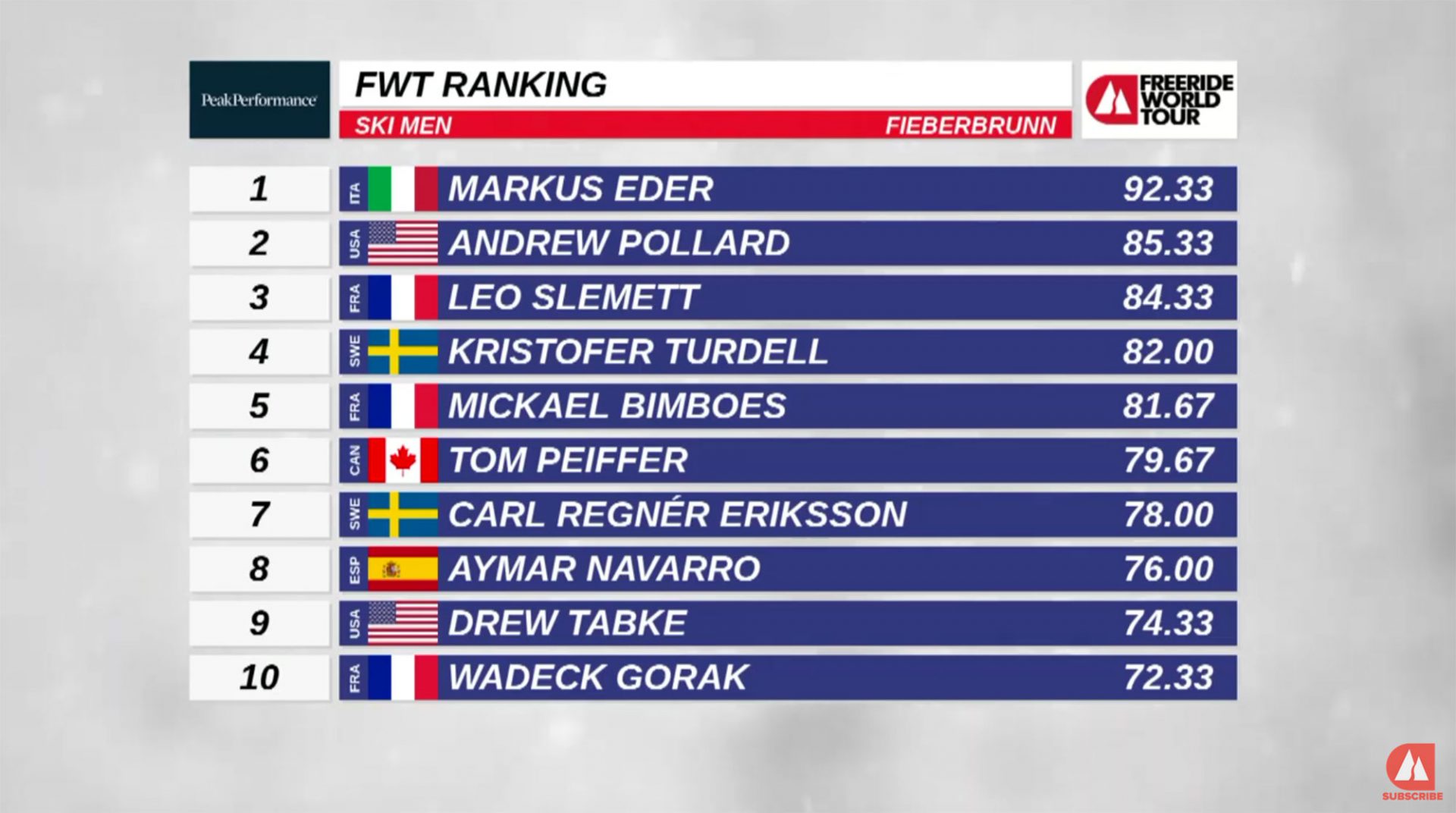 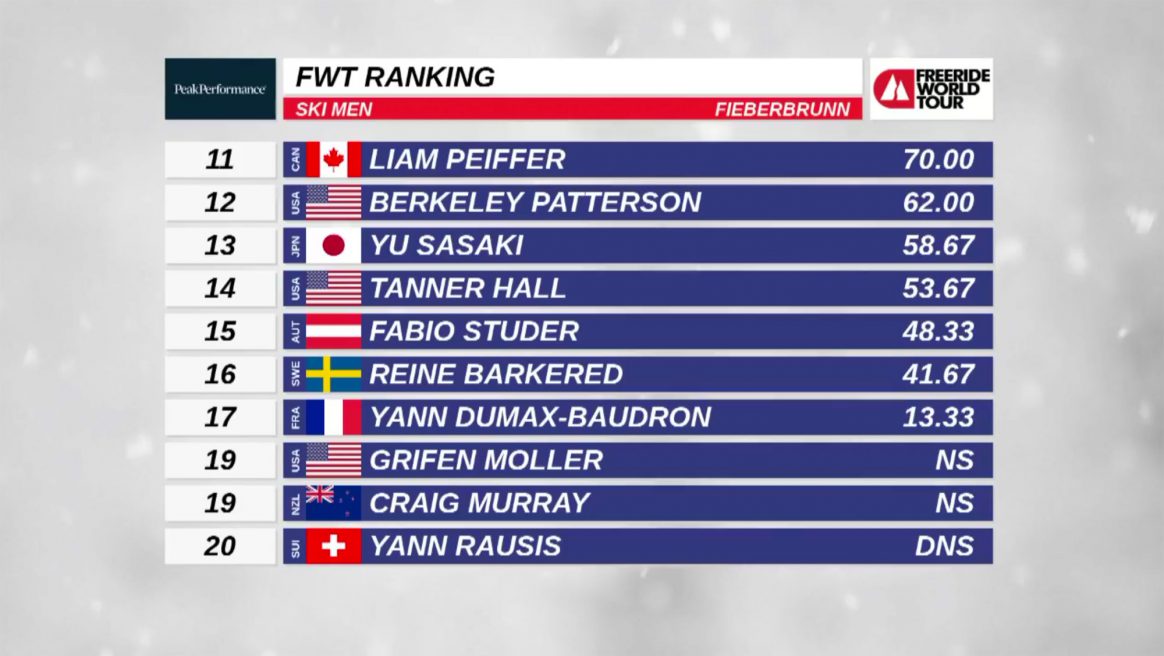 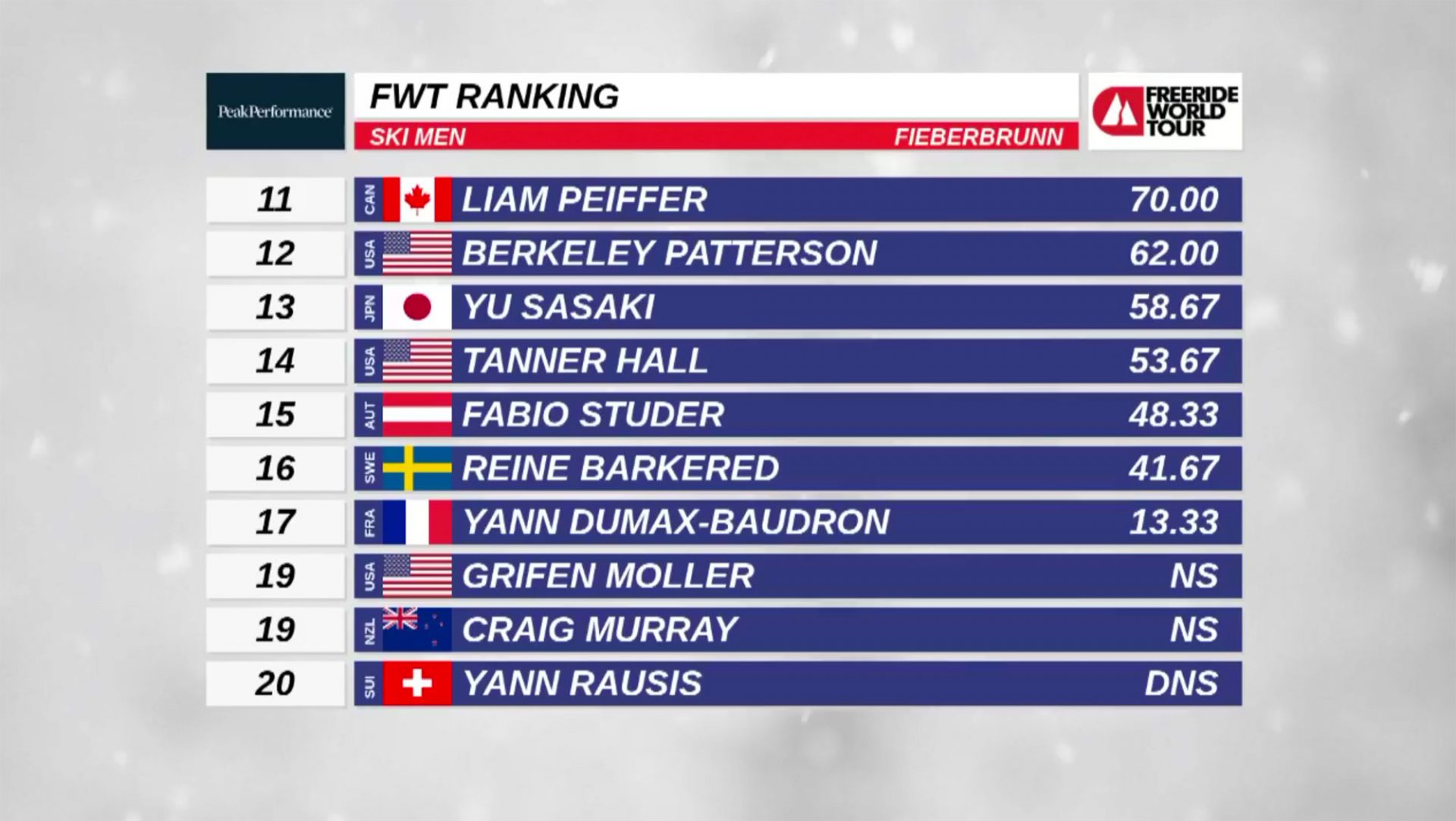 The ski women were next in the start gate, and Jacqueline Pollard kicked things off in fine fashion, heading far looker’s left and lining up a closeout chute and several drops lower down, skiing hard and fast throughout for a score of 82. “Holy balls!” was her comment at the finish, which sums her run up nicely!

Following her was overall leader Arianna Tricomi in the gold big, who picked a picturesque chute to looker’s right in the sun, but opted for straight airs in the lower “trick section” for a safety, rather than winning run—loosening her iron grip on the top of the leaderboard. FWT veteran Eva Walkner followed Tricomi to looker’s right, stomping the Hausl cliff clean before heading even farther out to the right for more untracked drops. 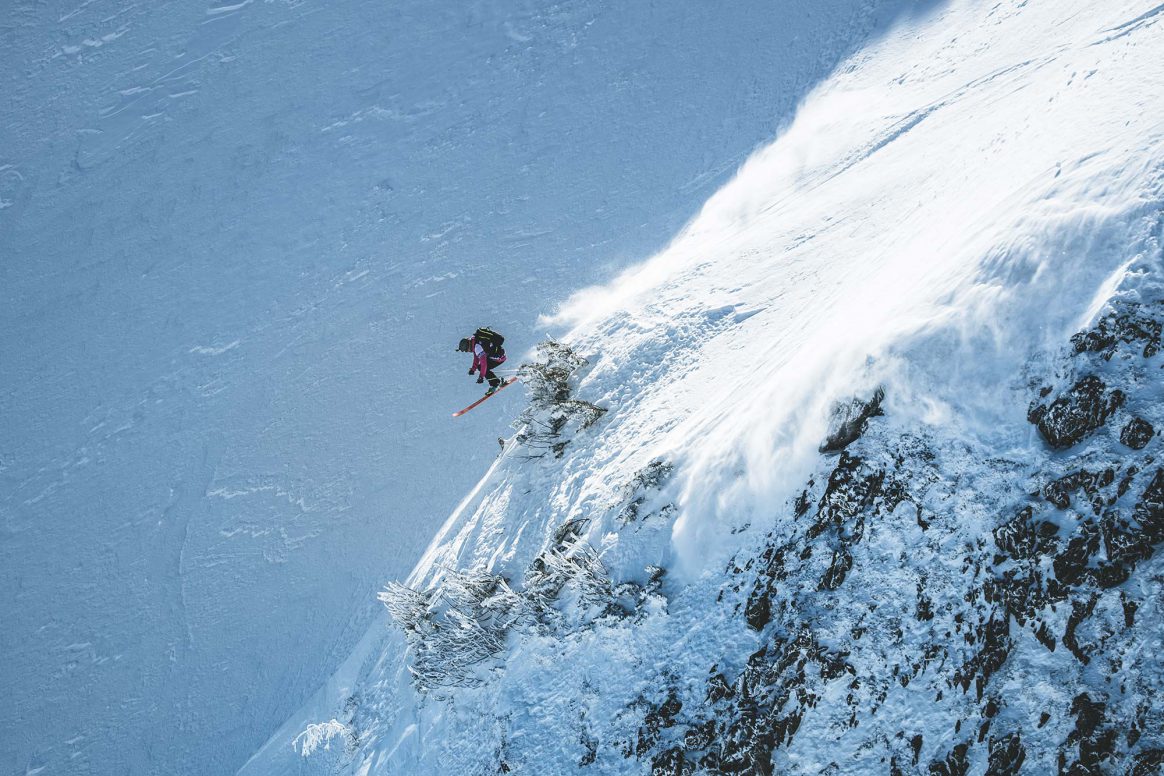 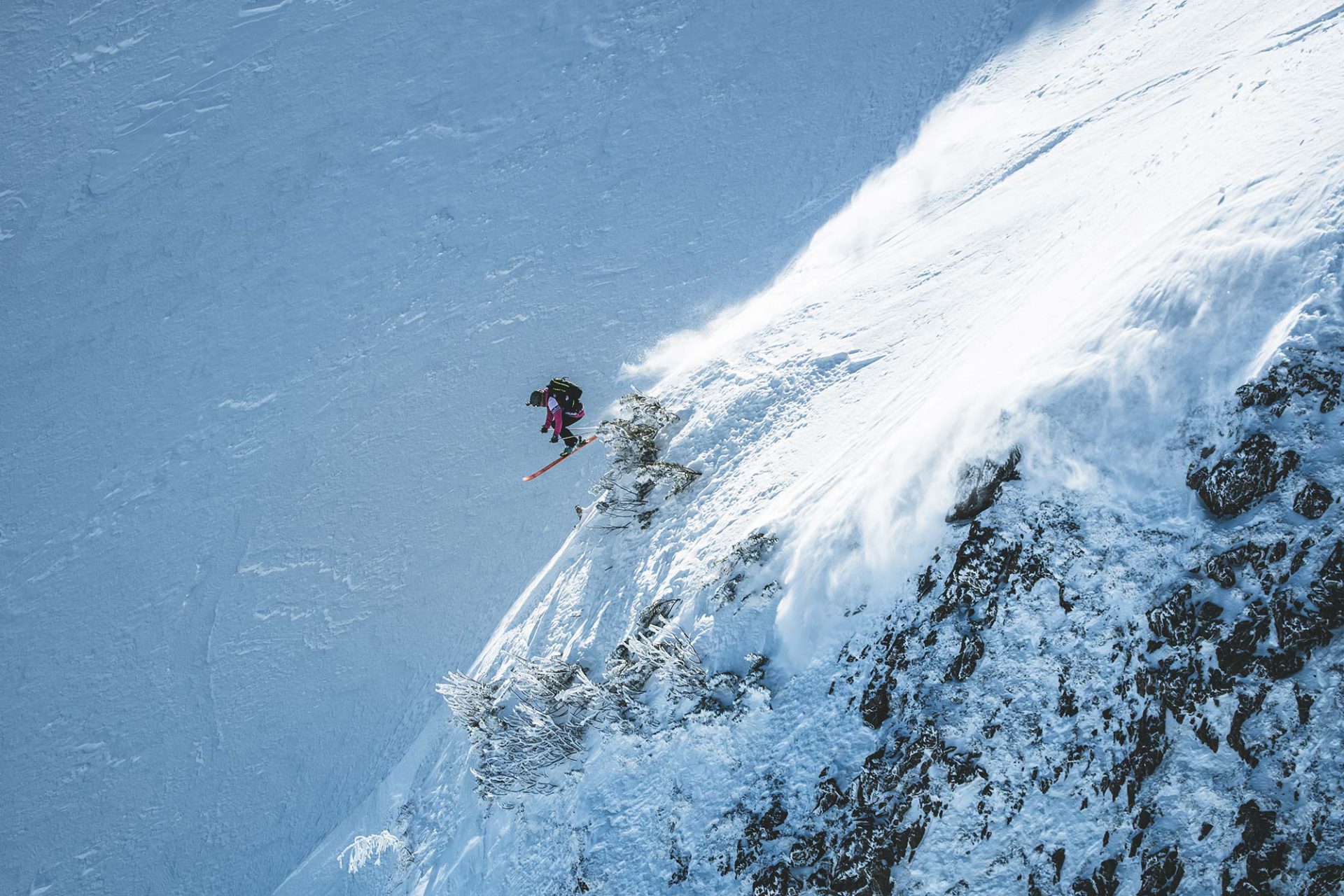 Juliette Willman picked a technical line right down the middle of the steeps, earning praise from the commentators for her “displacement,” and Japan’s Ayana Onozuka — still looking a bit hesitant from the big transition from halfpipe to freeride contests — skied out a clean run to looker’s left, bagging a chute with some small drops.

With Maude Besse out with a knee injury and Hazel Birnbaum not able to compete, three standout women were left in the start gate. Former bump skier Hedwig Wessel put her technical ability on display once again, ripping a line to looker’s right clean and stomping a backflip clean in the trick zone to bag the only air trick of the day in the women’s contest. The judges rewarded her in turn with an 86, the high score so far. 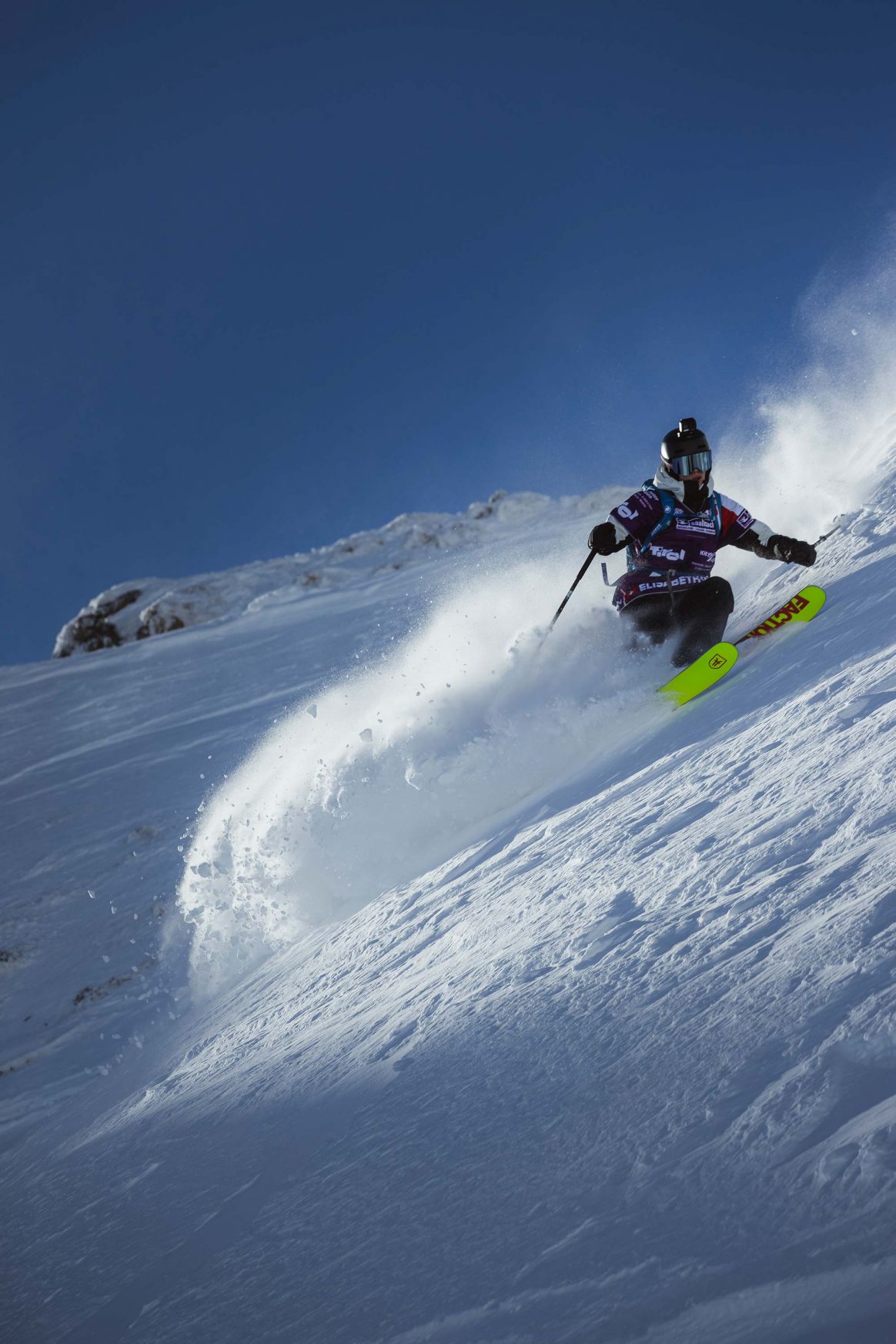 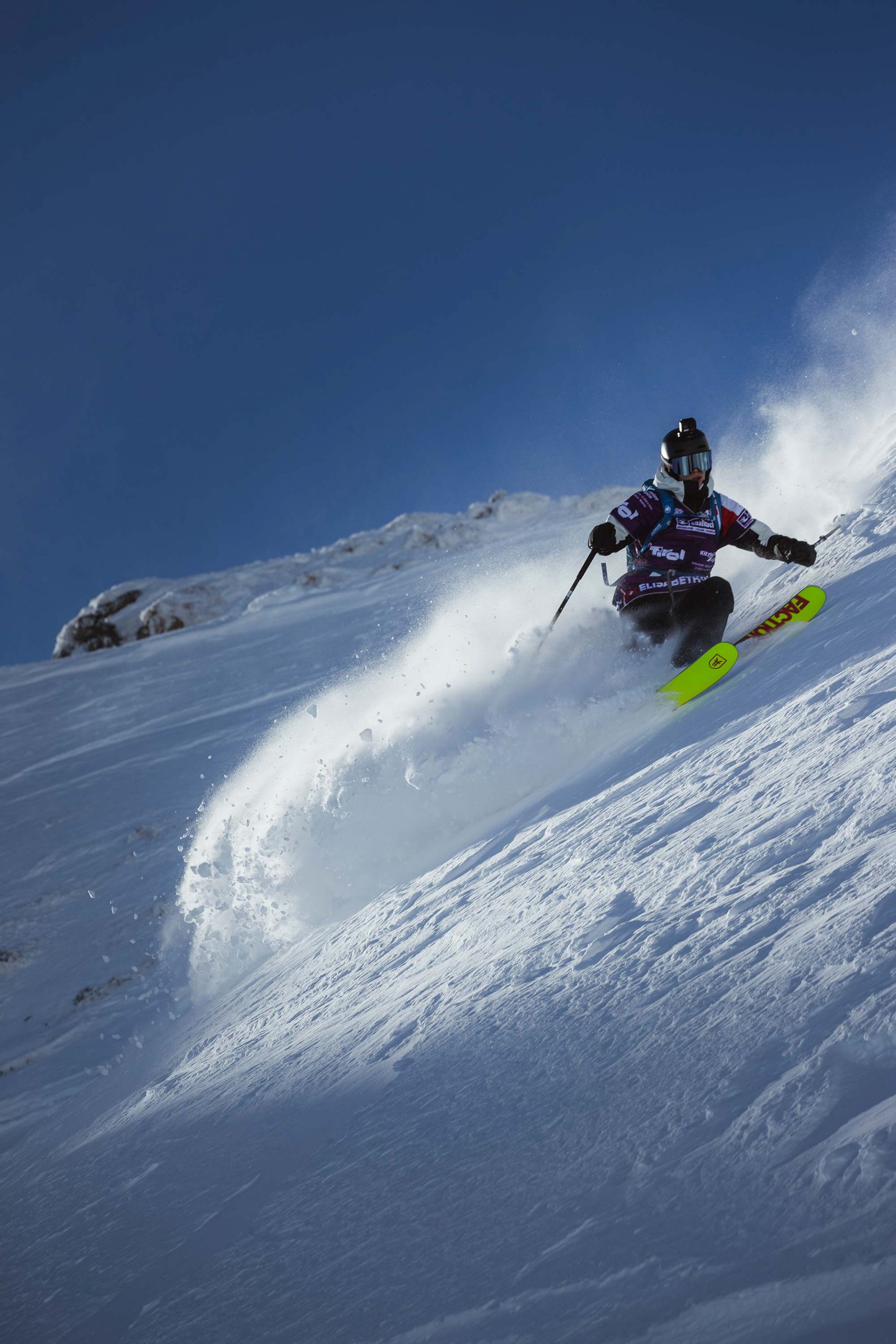 Veteran competitor Jaclyn Paaso dove right into one of the steepest sections of the venue—sideslipping her way in, which dinged her fluidity score, but then she lined up a big, bold drop and skied it out clean, maxing out her line score and skidding into fourth place. The last skier to hit the face, Switzerland’s Elisabeth Gerritzen followed the beaten path to the sunny slopes to lookers right, stomping the now tracked-out Hausl cliff and missing an air on the traverse, but sending the second cliff large and in charge. With two more airs in the lower zone, the judged deemed her run good enough for the podium, sliding her into third behind Wessel and Pollard. 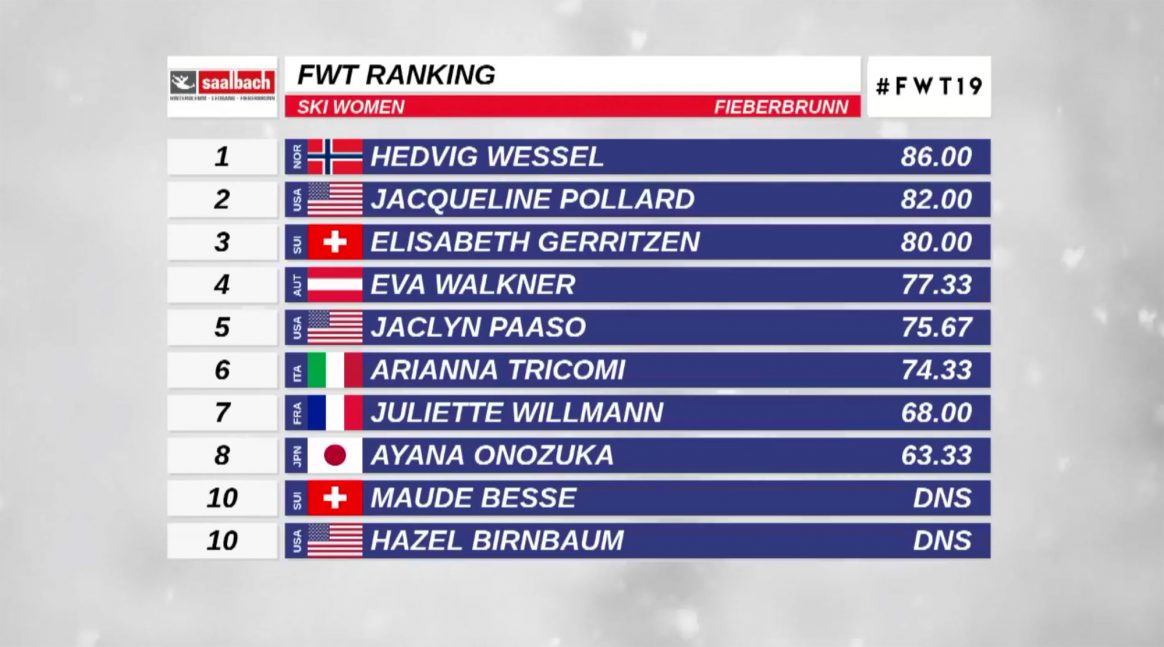 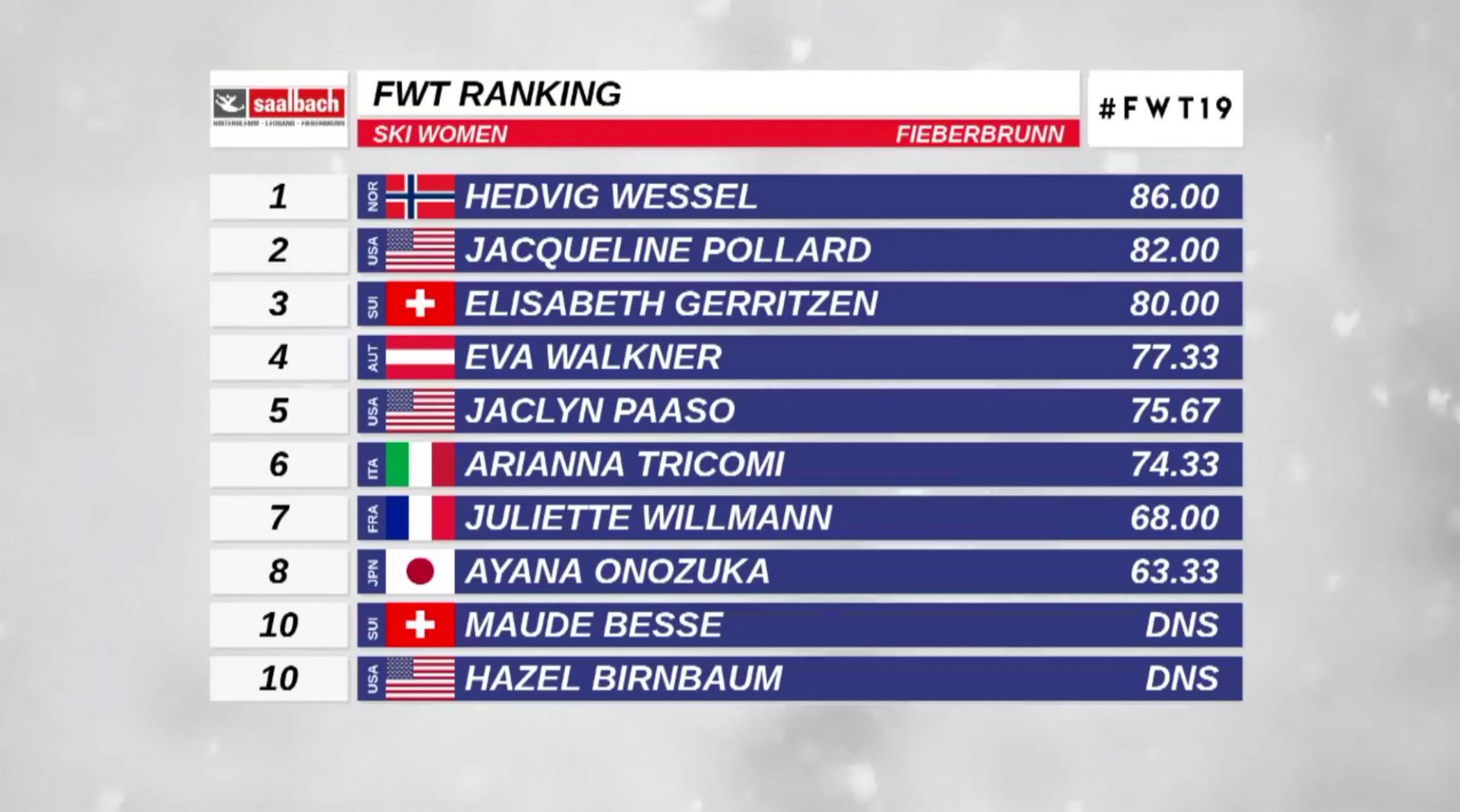 That’s a wrap on the Freeride World Tour in Fieberbrunn for 2019. Markus Eder has further extended his dominant lead in the overall standings with two wins and a silver, trailed considerably by Kristofer Turdell and Craig Murray. There’s been more of a shake-up on the women’s side, where Tricomi remains in the lead, but with Jacqueline Pollard and Elisabeth Gerritzen hot on her heels.

The next stop of the 2019 Freeride World Tour is coming right up in Ordino Arcalis, Andorra on March 2-8. Stay up on tour happenings at freerideworldtour.com. 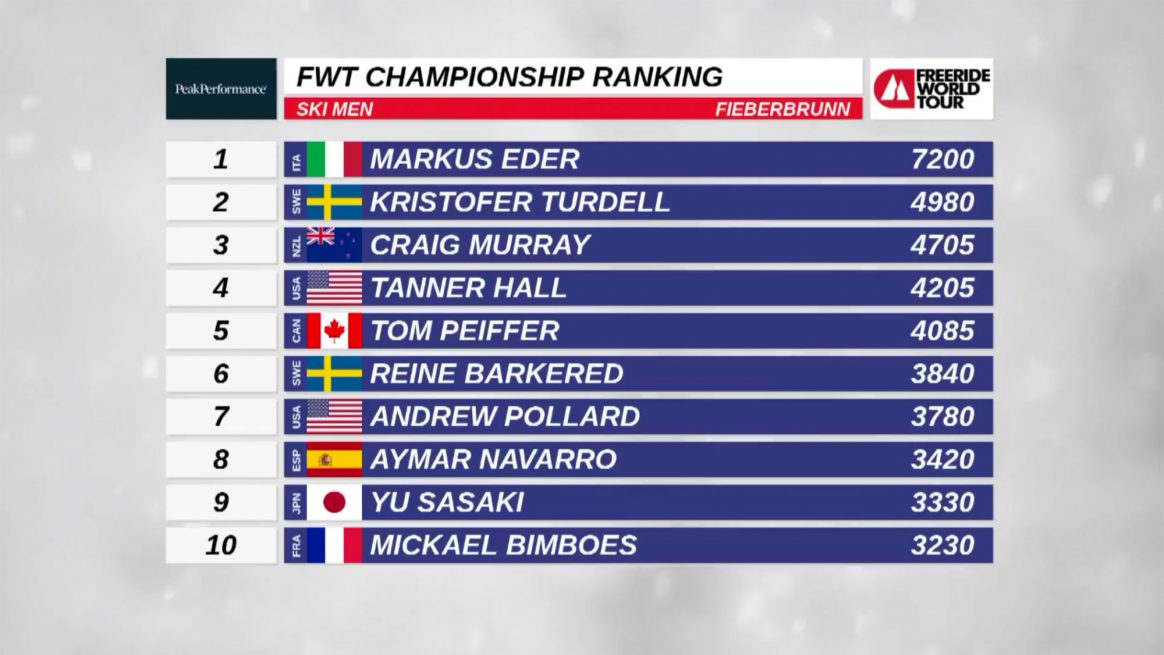 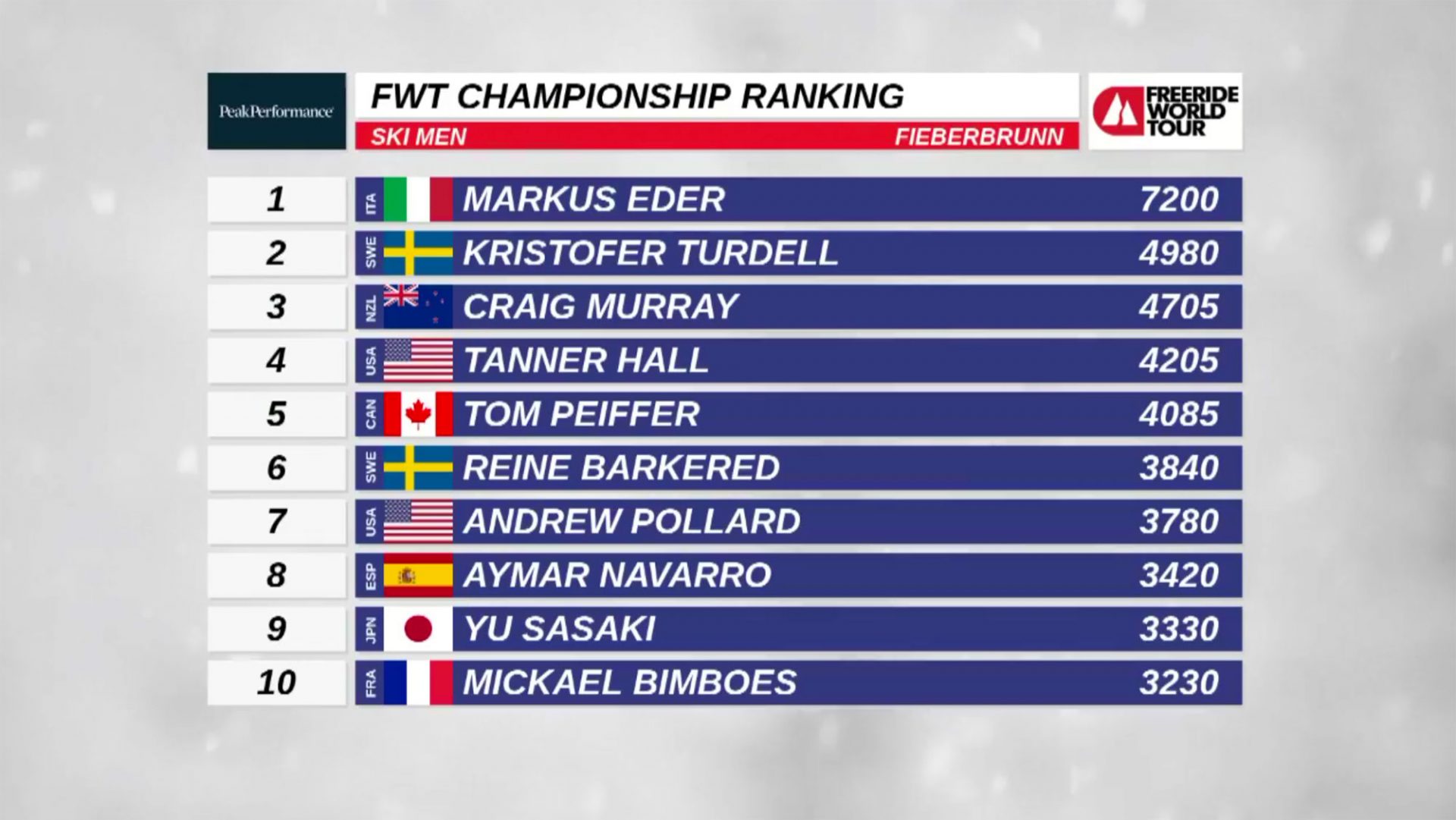 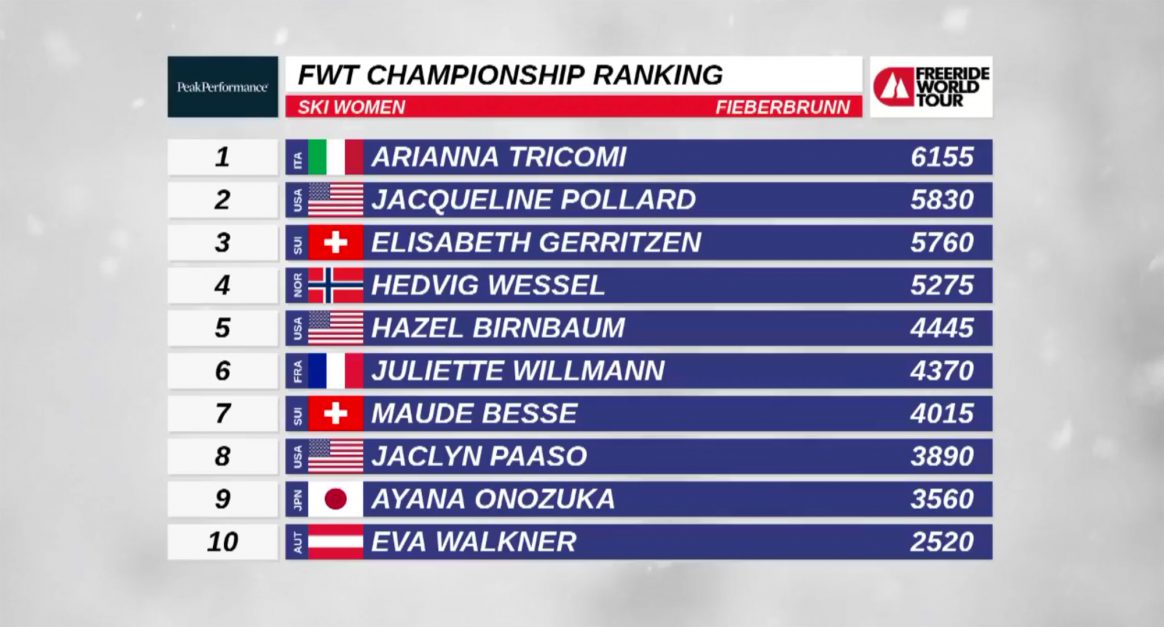 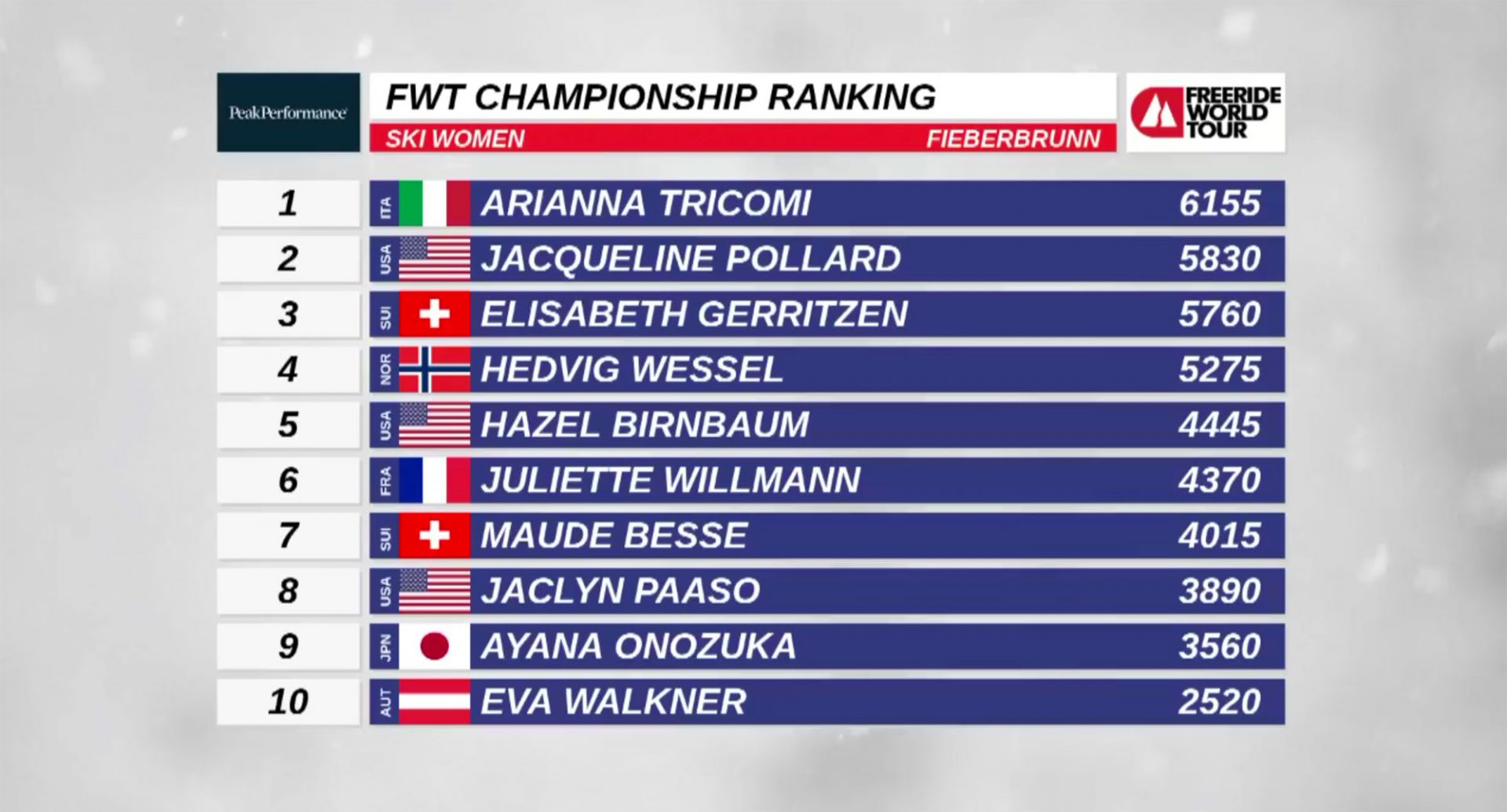