E-Dollo topped the men's podium at the first major slopestyle event of the season.

Henrik Harlaut and Kelly Sildaru took the win at yesterday’s World Cup Slopestyle on the Stubai Glacier in Tyrol, Austria to kick off the 2018/19 World Cup Circuit. 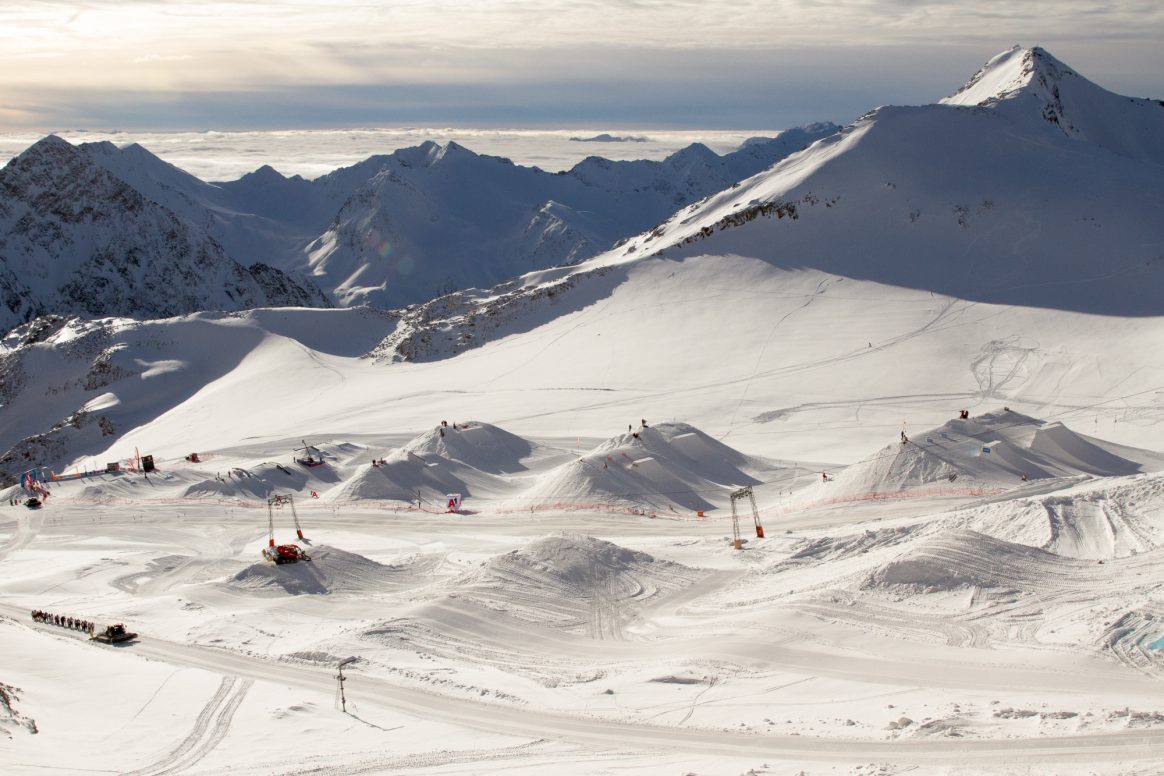 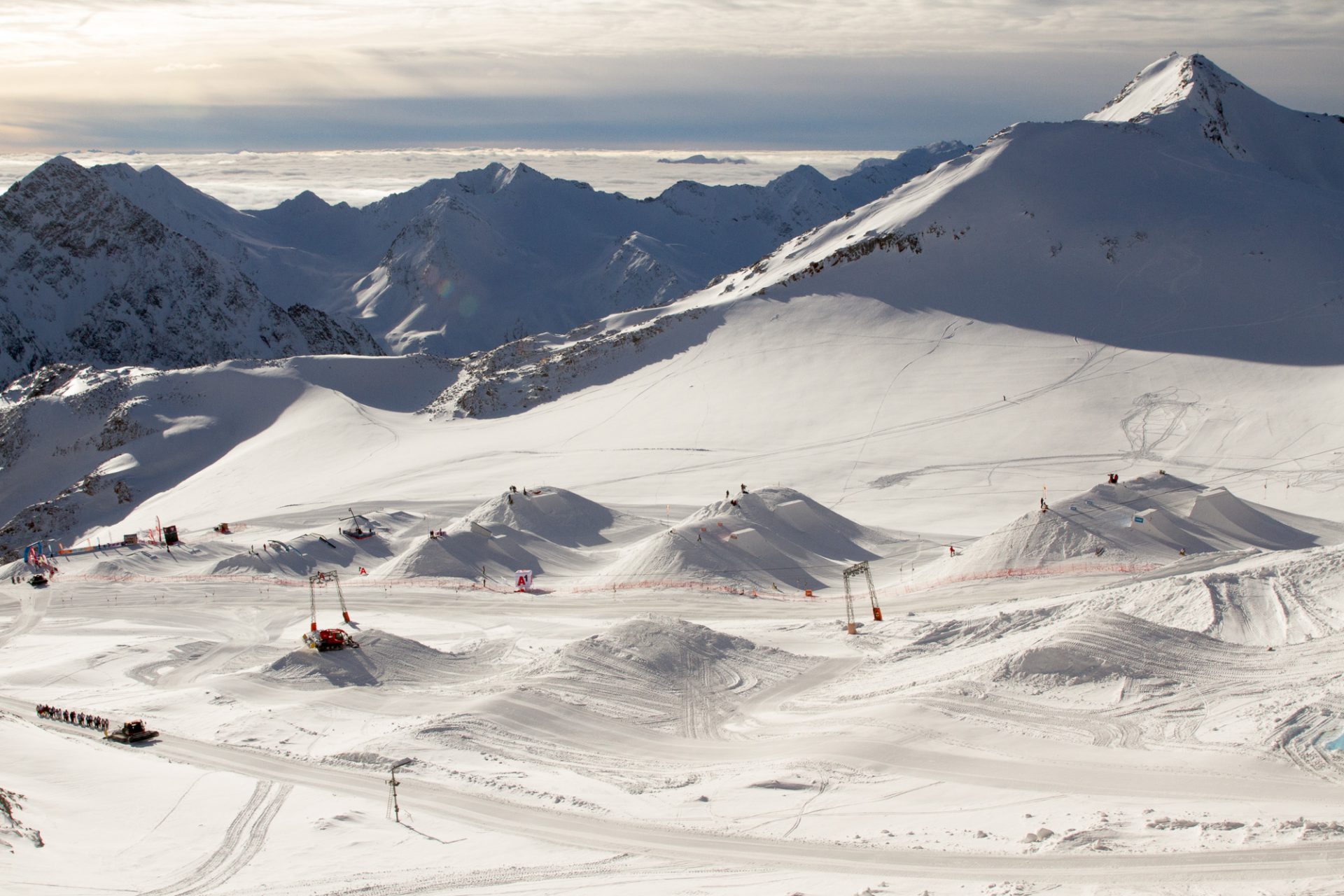 The south-facing slopes of the Stubai Zoo terrain park are a dream come true for the snowpark crowd. 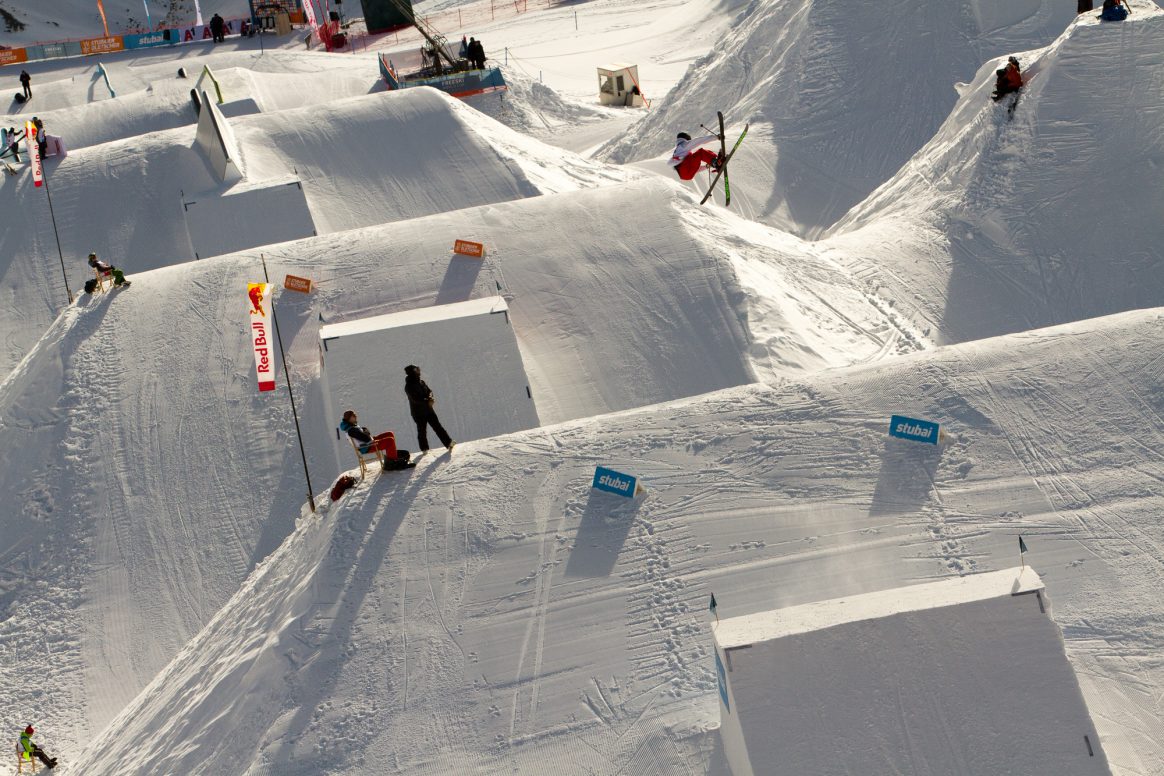 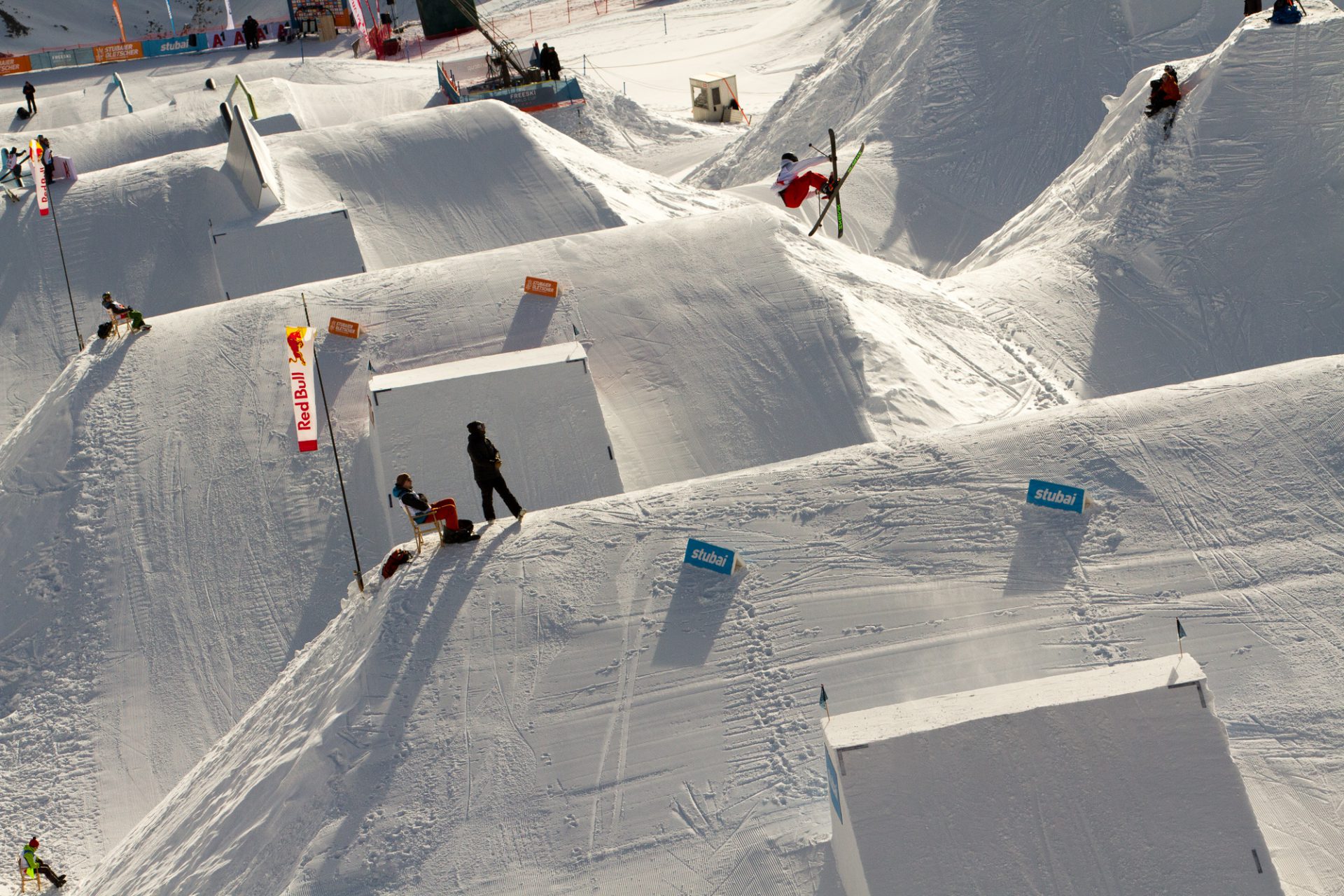 Canada's Patrick Dew was one of the fresh faces in finals this year.

With a storm brewing over the weekend, event organizers sped up the schedule, packing both men’s and women’s qualifiers in on Thursday, followed by finals on Friday. A stacked field of men and women advanced from the qualis, with Kelly Sildaru leading the women’s field with a staggering score of 97.00, and Willie Borm, Jesper Tjäder and Oscar Wester winning their respective men’s qualifying heats. 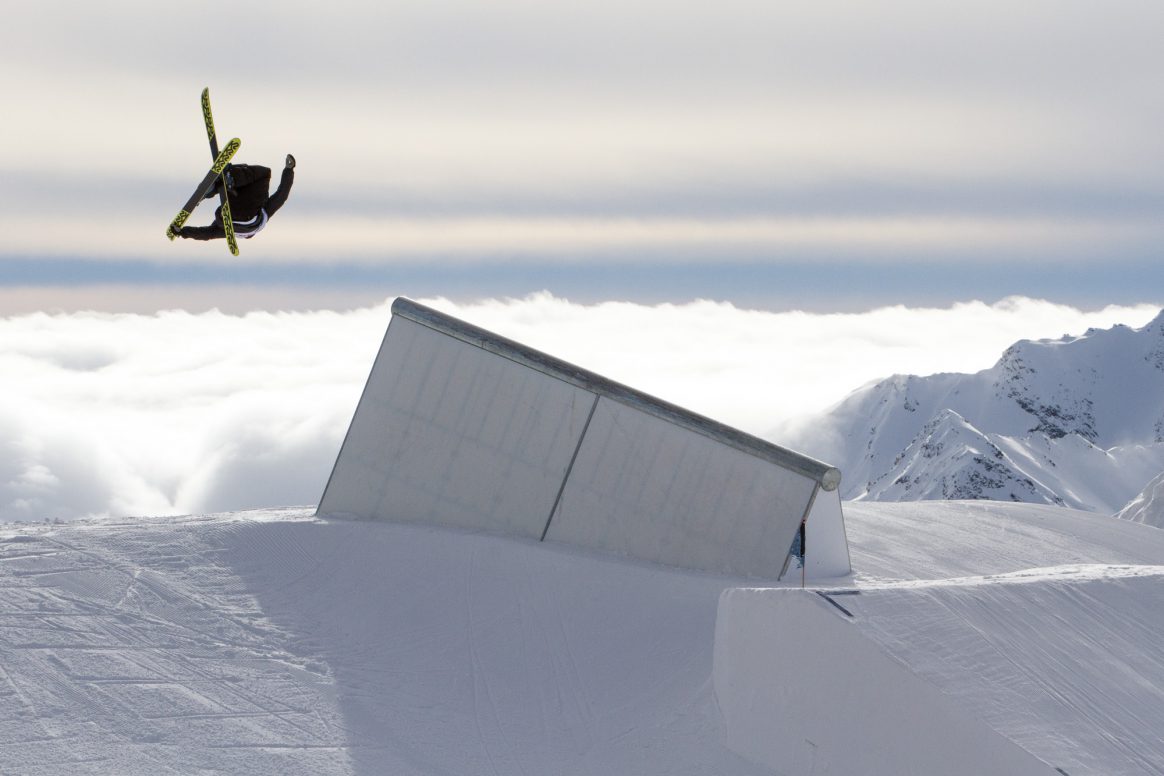 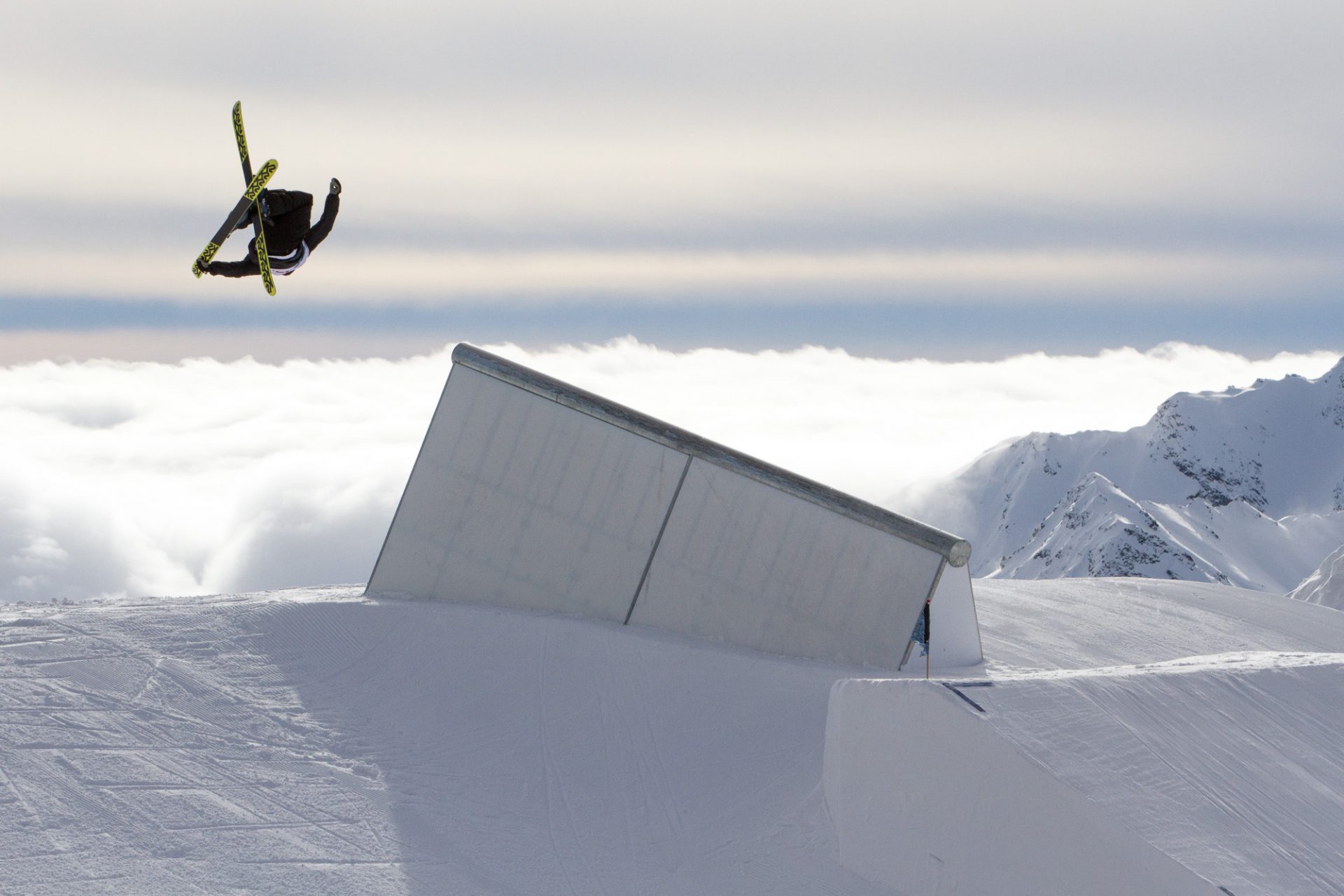 Colin Wili, one of four Swiss riders to make the finals, tees off on the cannon wallride feature.

On Friday, an oversized finals heat of 18 men and 8 women took to the slopestyle course for two more runs under fine conditions, with a blanket of clouds coating the vista to the south and the peaks of the Italian Dolomites lining the horizon. In the women’s field, Americans Maggie Voisin and Julia Krass both came out swinging with double corks (Voisin with a double 10 and 12, and Krass with a double 7), but both were unable to land clean runs. The heavy-hitting Swiss trio of Giulia Tanno, Mathilde Gremaud and Sarah Hoefflin held back on their doubles in this early-season contest, clearing the way for young Estonian phenom Kelly Sildaru to once again claim the top spot with back-to-back left and right switch 1080s, and a rail game (switch 2 on, pretzel 6 out on the cannon wall, front swap 270 out on a down rail, and a 270 pretzel 270 on the last rail) light-years ahead of her competition.

“I’m super happy,” Sildaru told FIS Freestyle. “My grabs could have been a little better, but still I’m pretty stoked about my run, especially about the rails.” 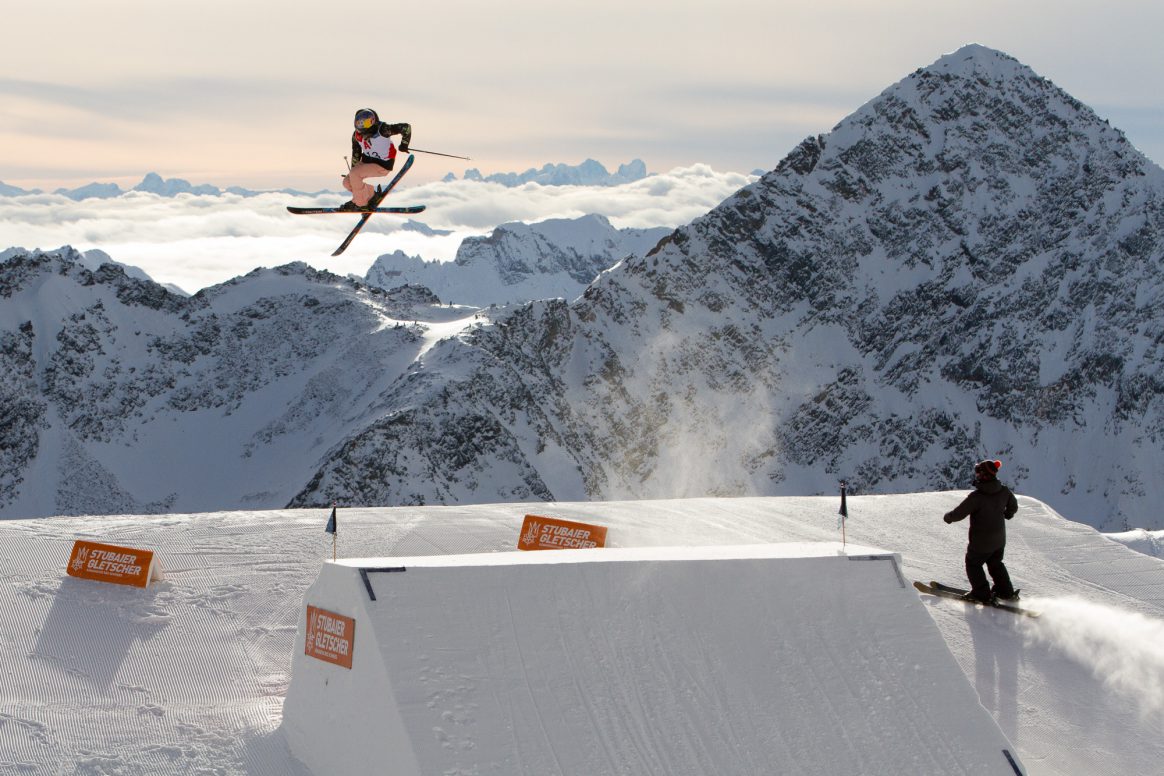 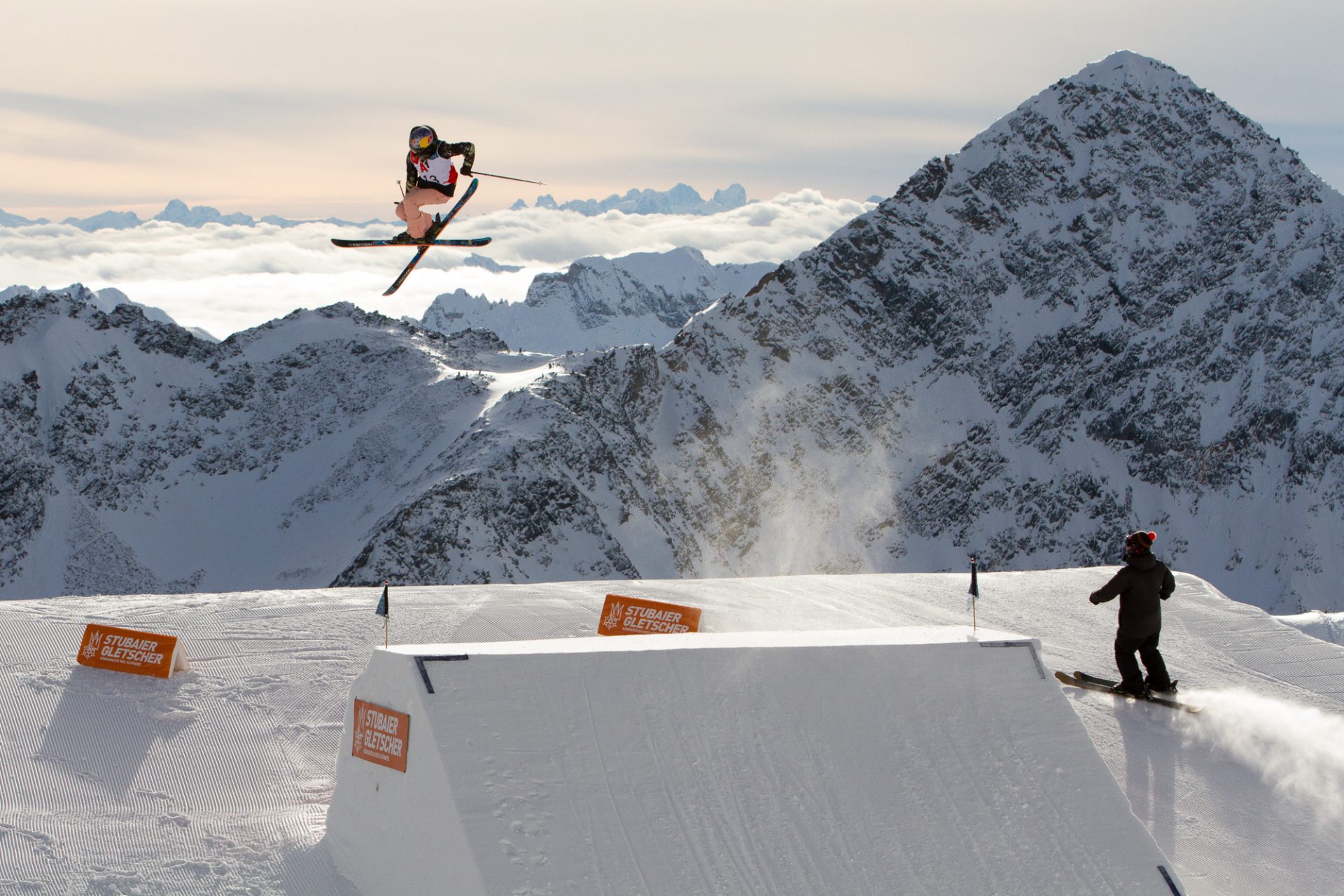 Kelly Sildaru's back-to-back switch 1080s were impressive, but her talent really shone in the rail section, where she was way ahead of the competition.

On the men’s side, a stacked field contended for podium placement, with the Swiss, Canadian and Swedish teams looking favored with four men each in the finals. Canada’s Teal Harle was looking for the podium with a switch triple cork—the only skier besides Harlaut to unpack a triple in finals on the relatively modest jumps of this course—and a huge disaster 630 in the rail section, but couldn’t hold things down to complete a run. 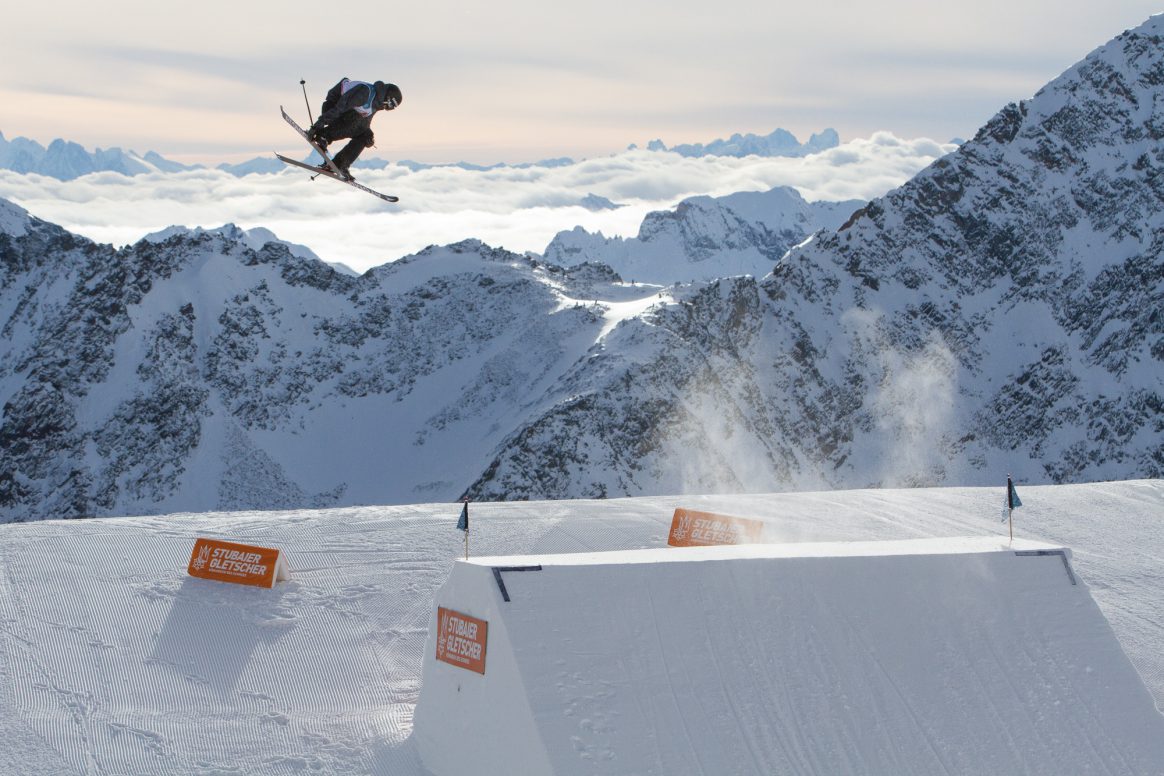 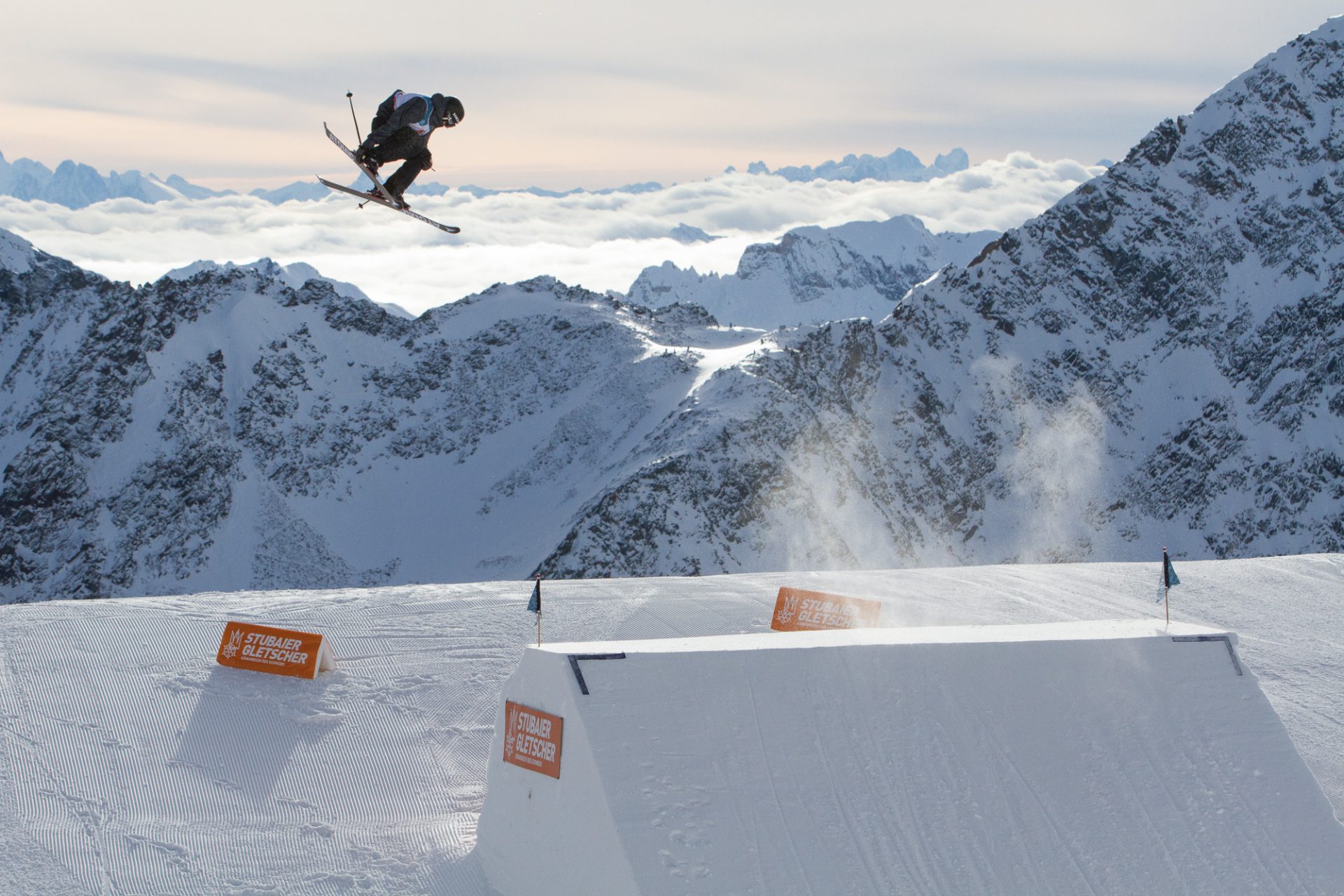 Switzerland's Fabian Bösch was a favorite, but took a tumble on the cannon rail feature on his first finals run and ended up with a concussion instead of a podium place.

In the end, Harlaut’s score of 88.88 was good enough for the win: his signature switch “orbital” triple 12 mute on the first jump, followed by a rightside double 12 safety and a classic E-Dollo performance in the rail section. He was trailed by American up-and-comer Mac Forehand, all of 17 years young, who impressed the judges with clean switch and forward 12s in the jumps and a big backside 360 swap, pretzel 2 in the rails, while Norway’s Ferdinand Dahl rolled into third place with flawless execution and a healthy dose of his much-hyped style.

“I’m a little speechless, but also I’m so so happy,” said Harlaut, “I had this run in my mind the whole week and to put it down in my first run it was amazing. I struggled during the practice, but it worked out when it counted. That’s probably one of my best slopestyle runs that I’ve ever done and also my first slopestyle World Cup victory so I’m stoked.” 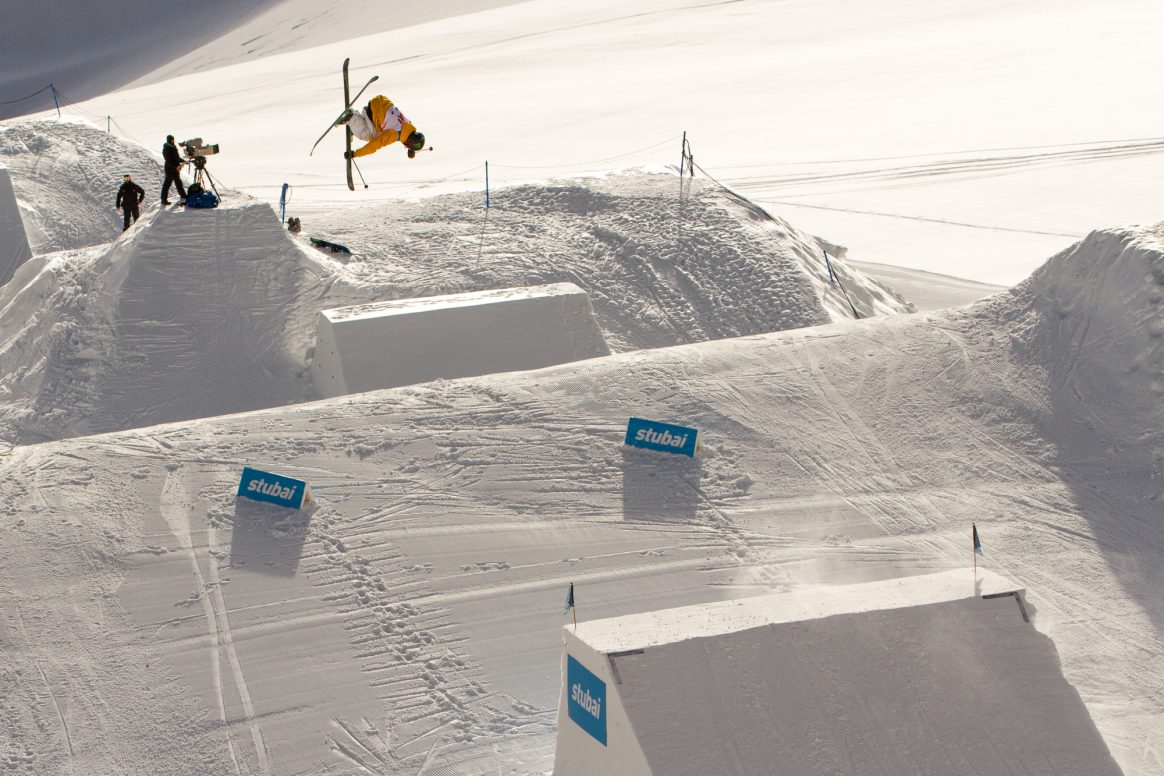 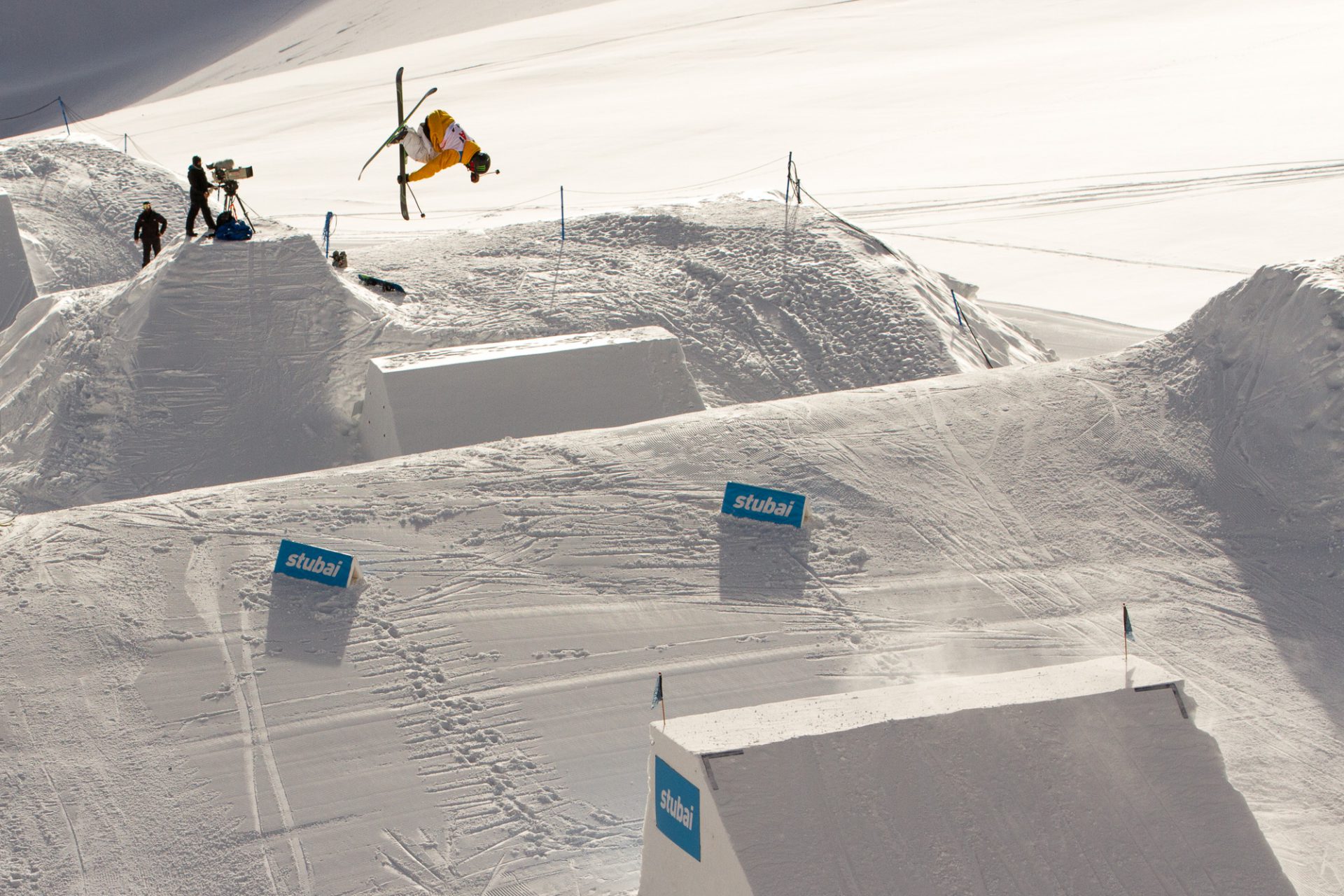 Some notables who missed the podium included out-of-the-box thinker Jesper Tjäder, who impressed with antics like a front flip japan off the cannon rail and a crazy 540 swap over the rail transfer; Swiss heavyweight Andri Ragettli, whose new switch double misty 16 wasn’t enough to carry the judges’ favor; and Canada’s Max Moffatt with a switch double 12 true nose grab that has to be seen to be believed. 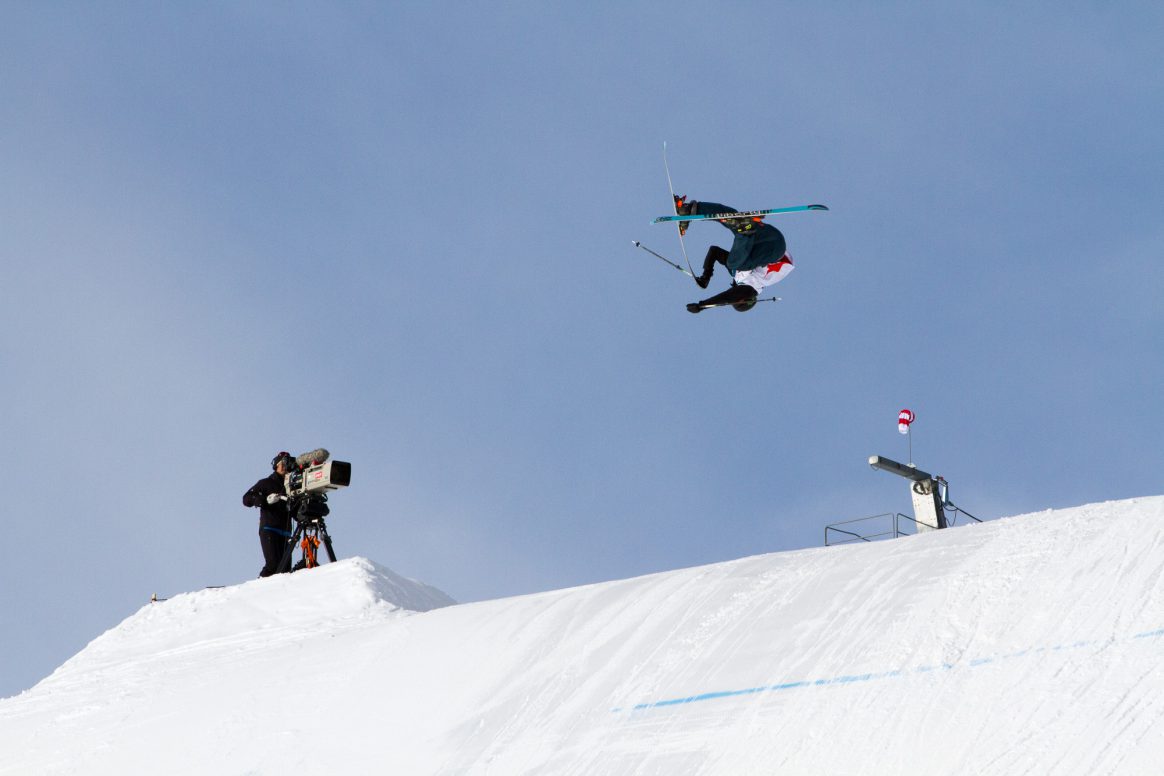 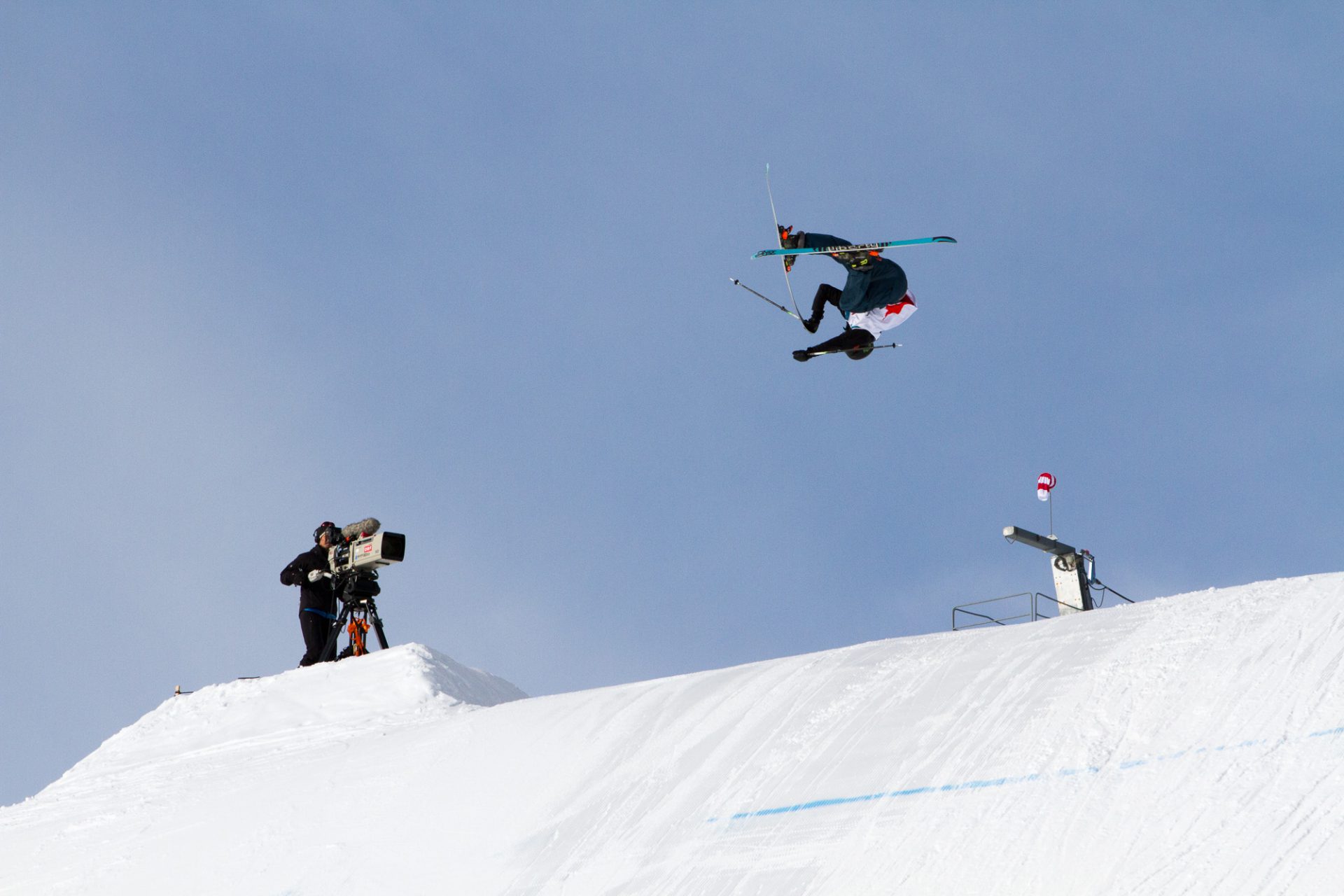 Yes, that's true nose in a switch double 12. Max Moffatt, you're a beast. 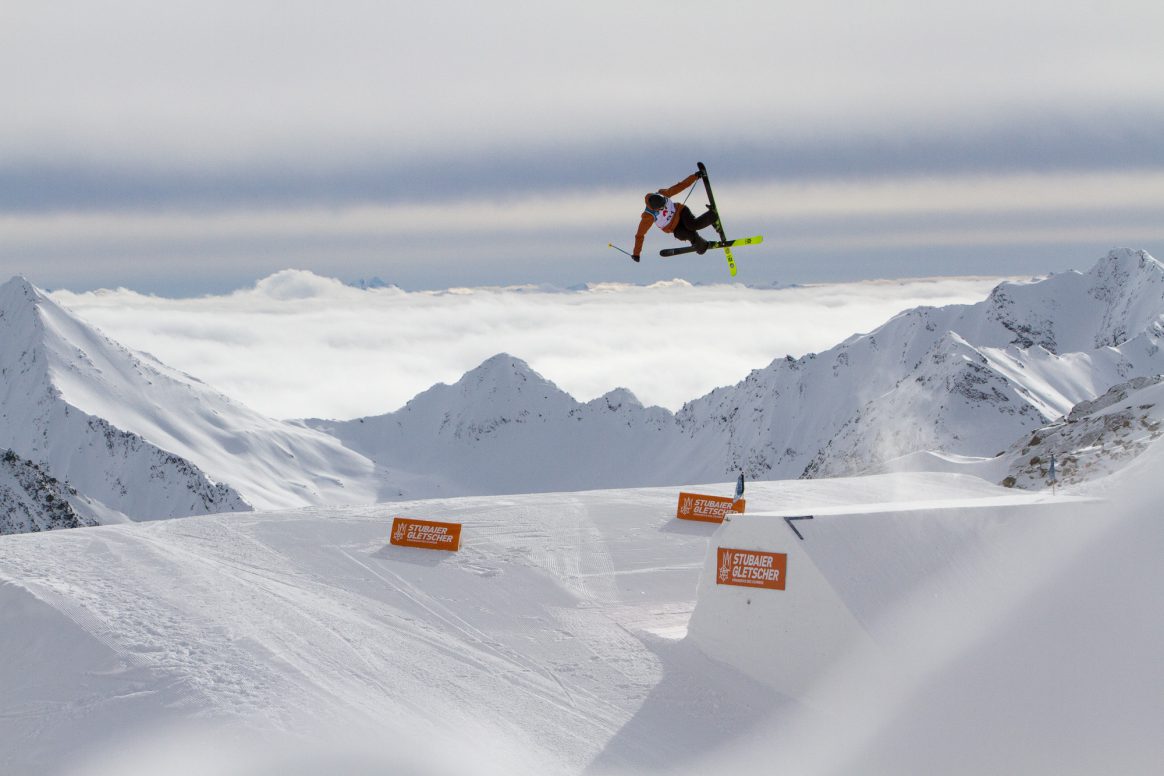 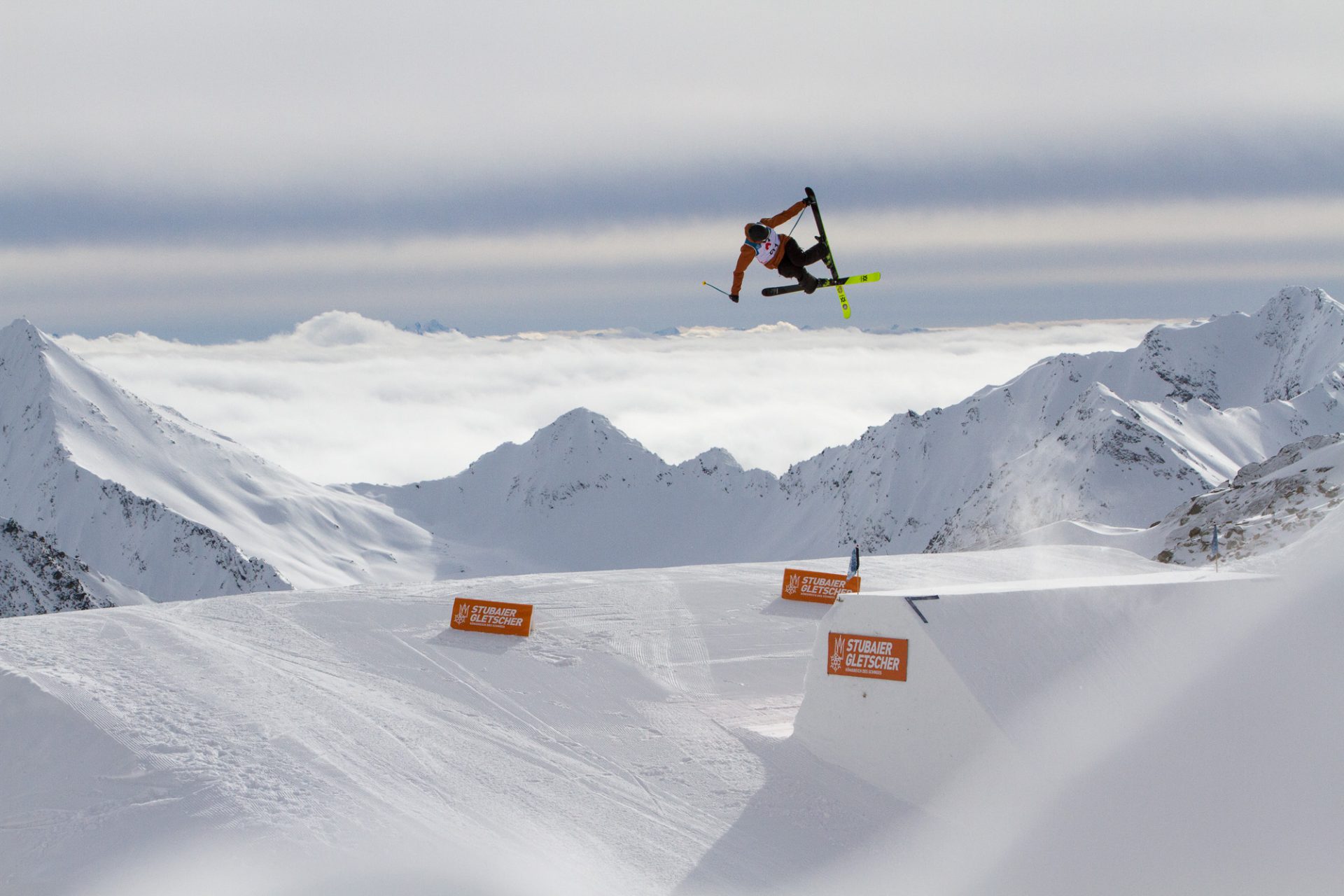 Another highlight was the debut of the new World Cup slopestyle judging format. Taking notes from the snowboarding side, which has been using feature-based judging for years already, the new format for freeskiing breaks down the judging on individual features, with a maximum of 60 points awardable for tricks, and an additional 40 points awarded for overall flow and variety. In general, athletes seemed pleased with the new format, which rewards riders for specific huge tricks landed, while still maintaining an eye on the variety of the overall run.

“It’s the first time we do it, and I think it worked out great,” said Jesper Tjäder. “You got really rewarded if you did something really crazy, and if you kept it really basic, the trick score isn’t as high. So I kind of like it.”

“I think it makes the rails more important,” he added. “Before, it didn’t really matter what you did in the rails—if you landed, you were good. Now, you really have to do some good stuff, otherwise your score is going to be low. I think that’s good.” 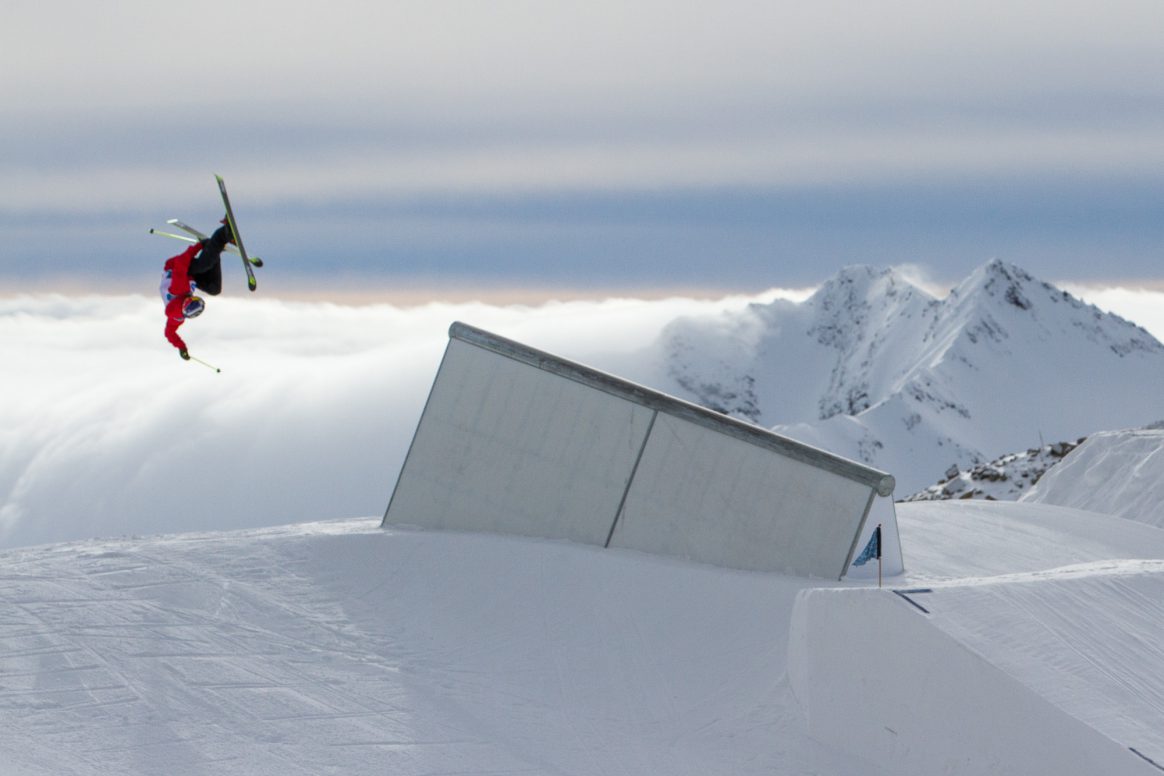 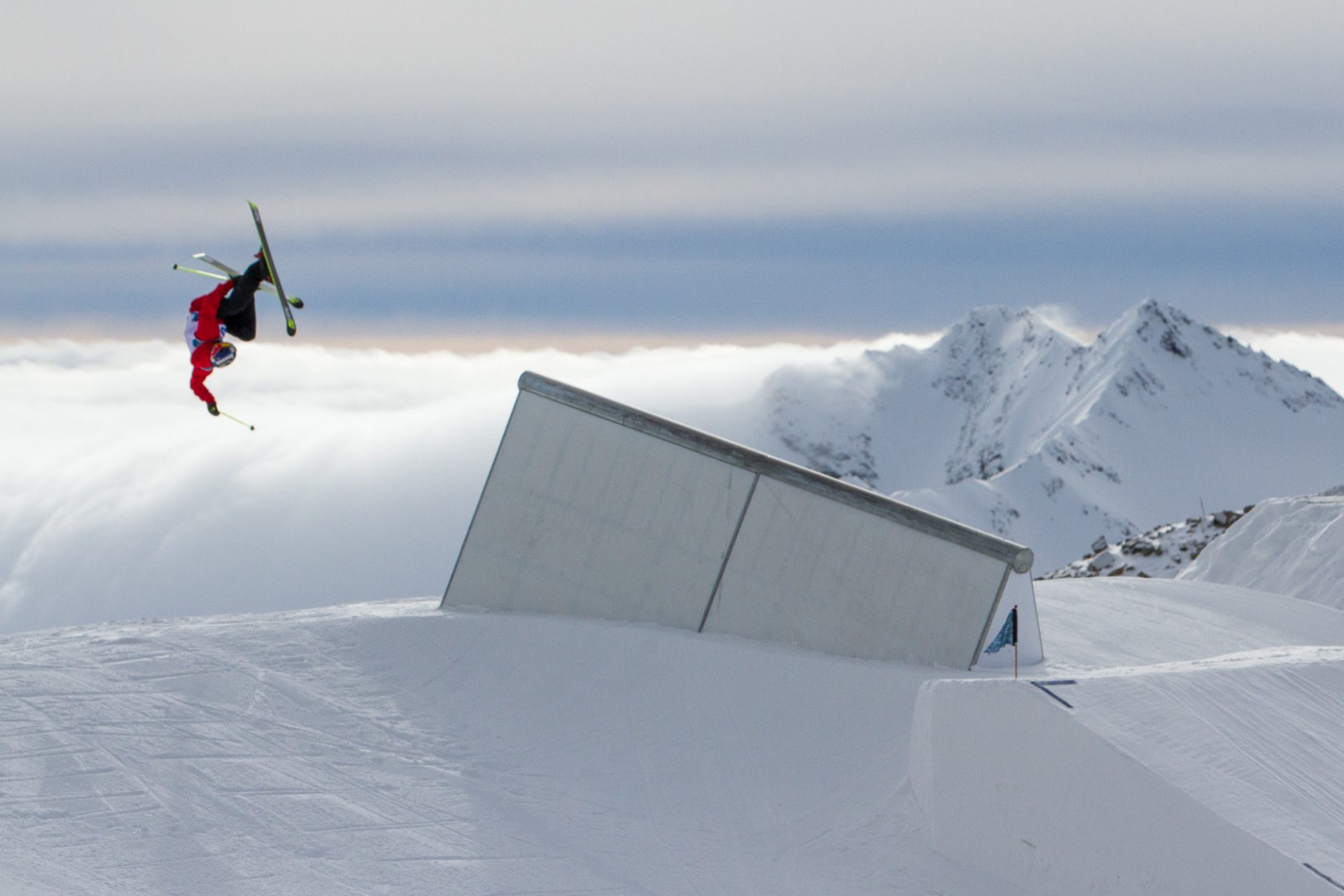 The new judging format means individual highlight tricks, like Jesper's front flip off the cannon rail, can be rewarded.

Another notable takeaway from the Stubai slopestyle was the remarkably young field. At age 27, Henrik Harlaut was the oldest competitor on course, with a pack of young guns hot on his heels: 12 of the other 17 finals contestants were 21 years old or younger. The amount of fresh young talent competing at a high level—like Forehand, Sweden’s Oliwer Magnusson or Canada’s Philippe Langevin—indicates that a new generation of freestylers is currently on the come-up. 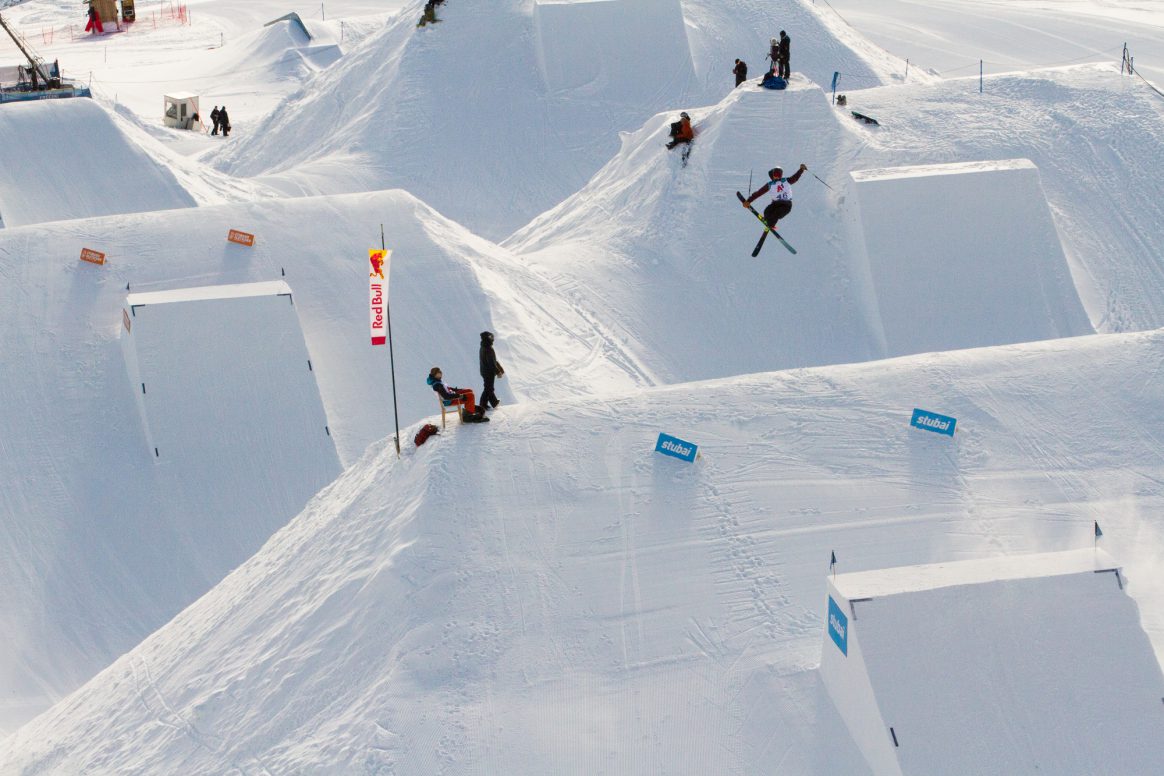 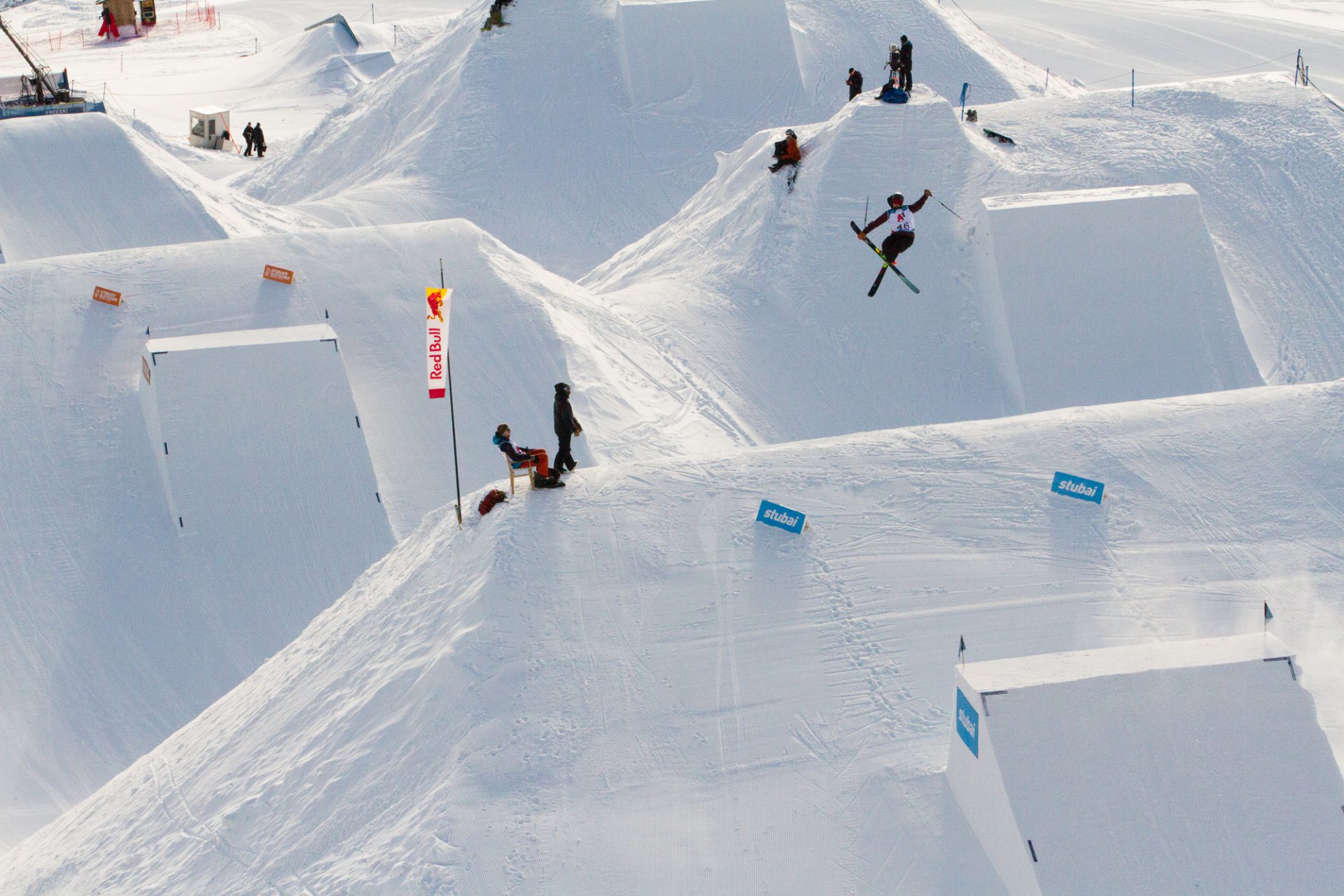 Younger riders like Mac Forehand are poised to make a splash on the contest circuit this season.

Attending a FIS World Cup as a freeski journalist is a bit of a trip. After all, our sport is practically founded on the motto “Fuck FIS”—and now, a few short decades since the start of the “freeskiing revolution,” here we are, back comfortably in the fold again. So it’s a little weird to see freeski legends like Skogen Sprang and TJ Schiller now coaching their officially mandated national teams, or to watch FIS anti-doping officials pull athletes aside at the bottom of the course for random drug testing. (Hopefully they aren’t so strict on the Freeride World Tour, T-Hall). But if anyone’s getting too uptight about the current state of freeskiing, it’s worth noting that while the slopestyle finals were going down on Stubai’s south-side Gaiskarrferner slope, on the other side of the mountain the Health Gang crew was busy throwing down wacky new-wave maneuvers in the park, while Peyben Hägglund was swerving around the mountain like a bat out of hell. And so, the balance is maintained.

The World Cup slopestyle circuit will continue in 2019 at the next stop in Font Romeu, France on January 10-12. 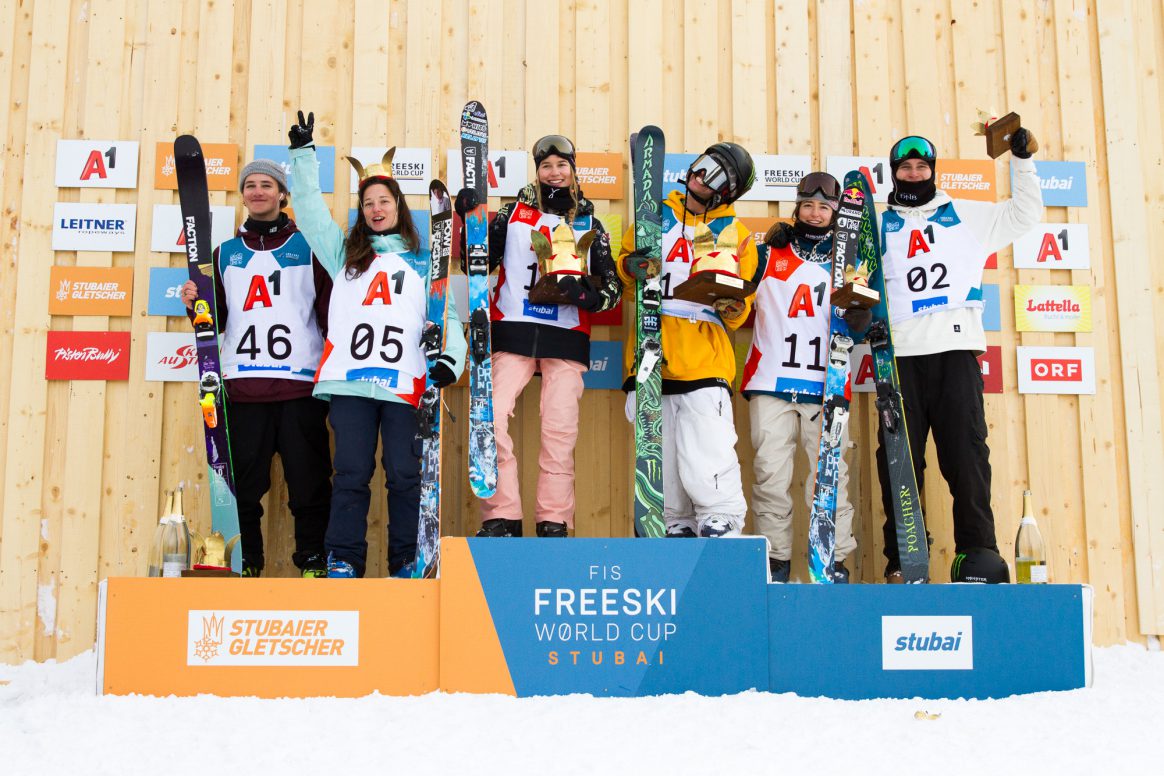 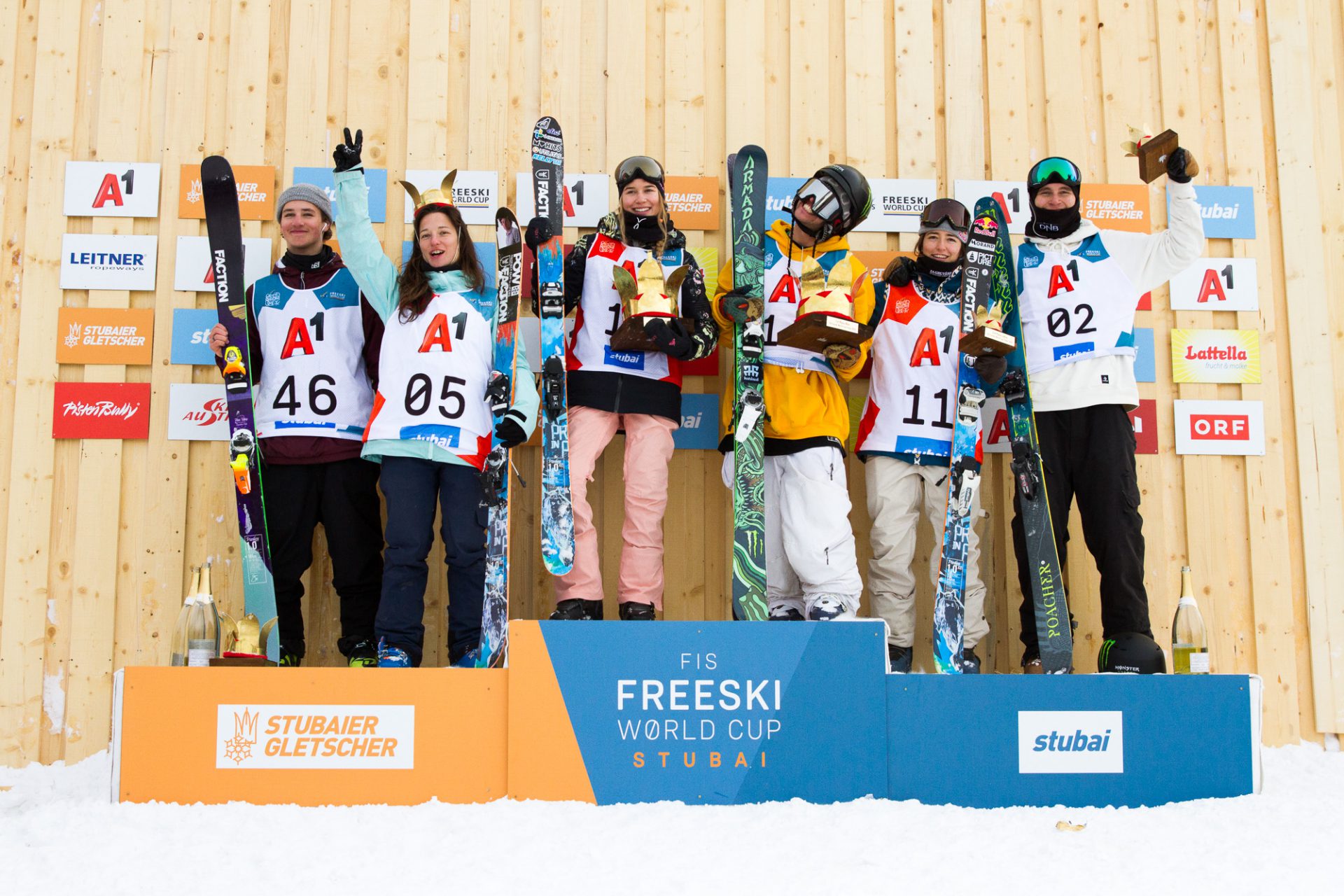 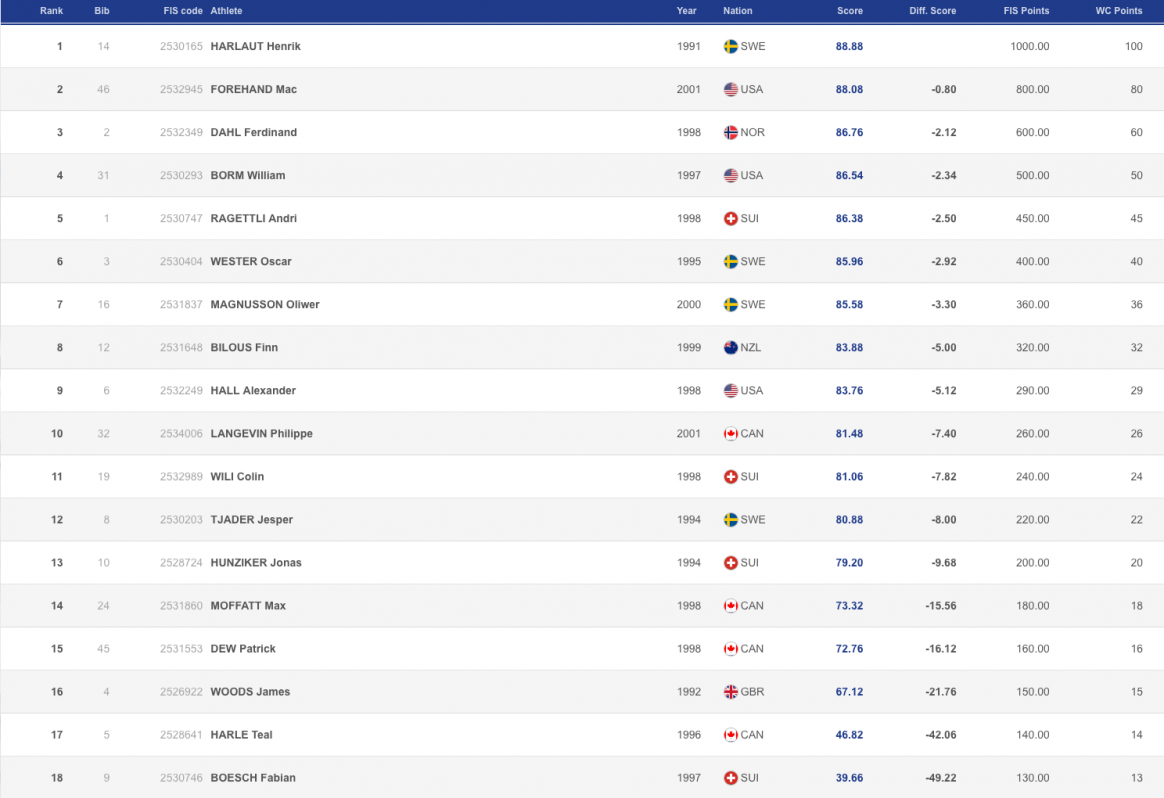 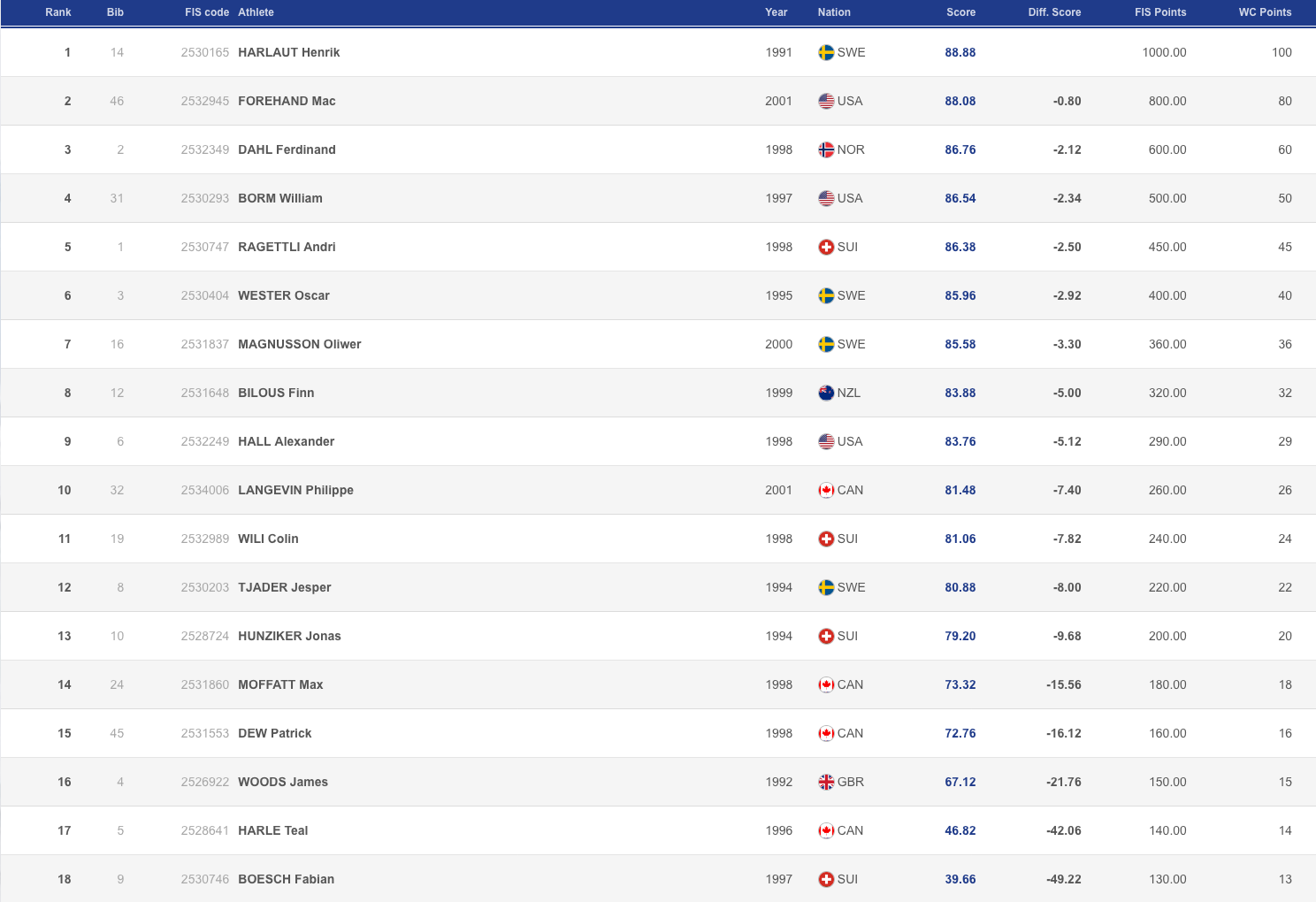 Olympic Ski Halfpipe: Who to Watch

Olympic Ski Halfpipe: Who to Watch