Tom Ritsch and Lukas Müllauer give us the down-low on their favorite snowpark. Photo: ©Kitzsteinhorn

Good News for all shredders: Snowpark Kitzsteinhorn in Zell am See-Kaprun, Austria, is in full effect! While Central Park and South Central Park opened a few days ago, Easy Park and Superpipe have been in operation since December. Kitzsteinhorn team riders Lukas Müllauer (AUT) and Tom Ritsch (AUT) introduce the snow park and its benefits.

Here's a little preview of the new Central and South Central Parks at Kitzsteinhorn, courtesy of the hard-working snowpark crew.

One of Austria’s top freeskiers, Lukas Müllauer is sponsored by Kitzsteinhorn as of this season. The 22-year-old is a multiple Austrian champion in halfpipe, slopestyle and big air, and finished 16th in the halfpipe competition at the 2018 Olympic Games. In March 2019, the young gun from Saalfeld became the first Austrian freeskier ever to win a Big Air World Cup. This season he took a convincing 8th place at the FIS Big Air World Cup in Modena (ITA), and is on the hunt for more big results.

Tom Ritsch from Niedernsill has been supported by Gletscherbahnen Kaprun AG for several years. The 26-year-old is a good-humored freethinker who has made a name for himself in the scene as part of the “Legs of Steel” crew and with his creative film segments, including a standout role in last season’s “121” movie from LoS and Völkl. Ritsch has also scored several successes in the SLVSH Cup and at the prestigious Audi Nines.

No wonder Tom's park game is so on point. Photo: ©Kitzsteinhorn

“It is quite difficult in our sport to find a snow park with obstacles at World Cup level,” Lukas Müllauer explains. “Kitzsteinhorn offers these obstacles for slopestyle, big air and halfpipe, which makes Snowpark Kitzsteinhorn unique in all of Austria.” Central Park is definitely his favorite on the Kitzsteinhorn, he clarifies: “It offers something for everyone. And its biggest advantage is its location in relation to the solar radiation. In many snow parks, the sun first reaches the take-offs and only later the landings, which is especially difficult in springtime. At Central Park it is exactly the opposite, which makes the take-offs perfect all day long, and the landings stay nice and soft.”

Tom Ritsch adds: “For me, the biggest advantage of Kitzsteinhorn is that you can ride so many different obstacles in one run. Pipe, rails, kickers – there is something for everyone. Another advantage is that the season starts early with the Glacier Park in autumn and only ends late in spring.” His favorite obstacles at Central Park are the Hip and the Pro Jump. “They are perfectly built and invite you to learn new tricks,” he says.

The set-up of the Central Park currently comprises 14 obstacles, including a medium kicker line with four kickers between five and twelve metres. Plus, there is the favourite obstacle of Tom Ritsch and Lukas Müllauer: the 18-metre Pro Jump, which is the biggest kicker not only in the Snowpark Kitzsteinhorn, but far and wide. Next to and below it there is a jib line, which has been completely redesigned this season and which reminds of a skate park with its pool section in the starting area. A wallride and a rainbow rail follow at the end. The snow-park team around head shaper Martin Liebmann is currently working on expanding the park with more tubes and the new Double-S-Rail.

“Before you enter Central Park, you can already start the run with South Central Park, which is situated at the exit of the Sonnenkarbahn,” explains Ritsch. South Central Park has been extended this season and therefore has a new entrance a little bit further upwards. The set-up consists of nine obstacles and will be still extended. Besides an easy down rail, you will find long tubes and a smooth down flat down rail. 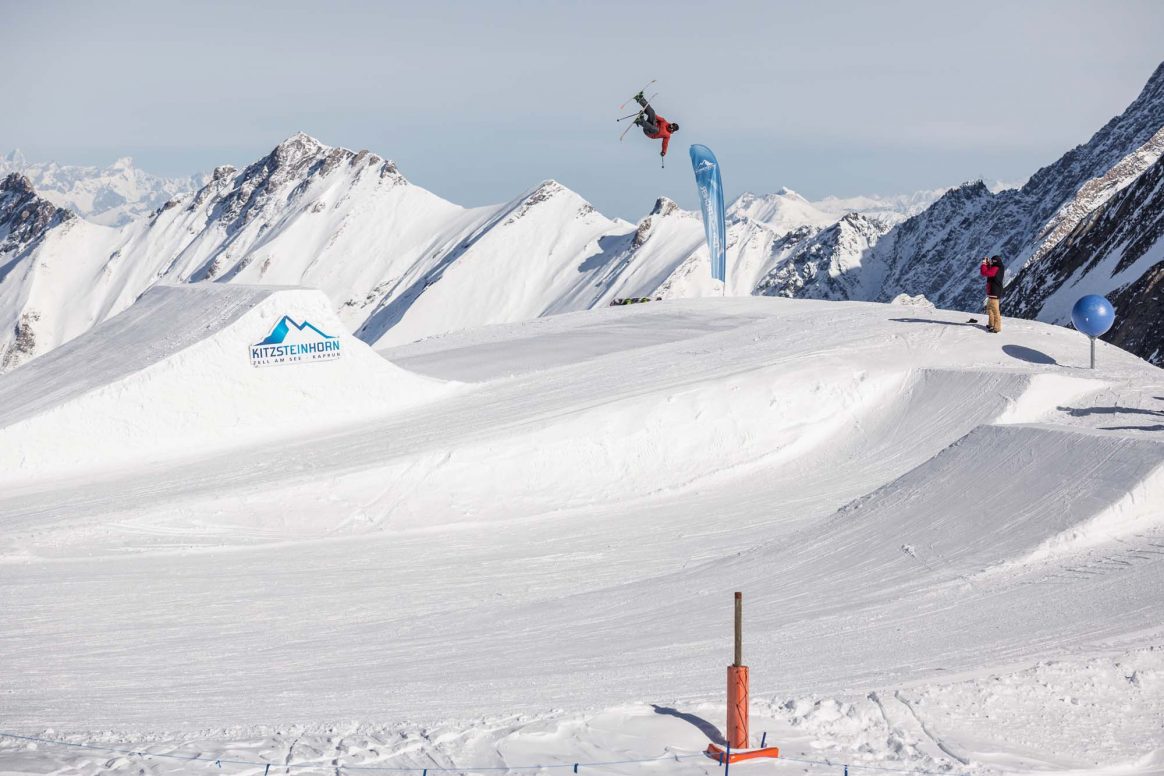 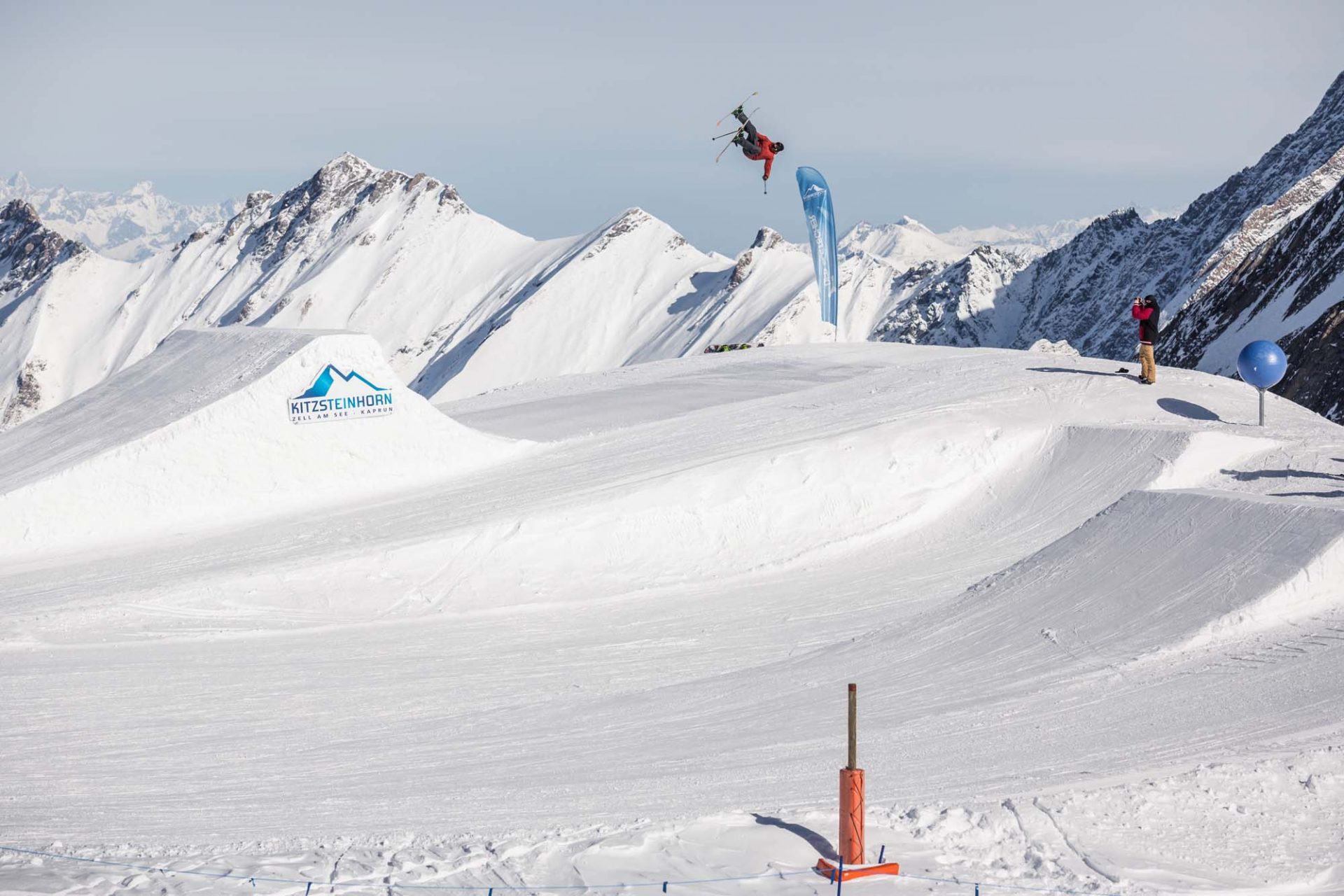 How's the air up there, Tom? Photo: ©Kitzsteinhorn

South Central Park is directly connected to the following Easy Park. It offers boxes, tubes and rails as well as an Easy Kicker Line. The perfect place for beginners and advanced riders to learn new tricks or improve their kicker skills! At the end of the Easy Park, the Hip, so appreciated by Tom Ritsch, leads into the Central Park. With this line you can do loads of obstacles in a single run! “It is our goal to create a setup in which riders of all levels can have fun and let their creativity run free,” says Martin Liebmann.

In addition to these three parks, Kitzsteinhorn also offers the Eagle Line as well as the 150-meter long and 6.5-meter high Superpipe, where you can meet the absolute top stars of the international halfpipe scene. A lot of action on the three-thousander in Zell am See-Kaprun, Austria!