You heard right, touring aficionados: Armada is moving full speed ahead into the human-powered side of the sport. Yes, they’ve already been making moves in that direction for a while, with tour-ready offerings like the Tracer Series and the ARV 116 JJ UL already in the line-up. However, the new Locator Series promises to be Armada’s most tour-specific range to date.

Now, before you park rats throw a hissy fit about Armada serving a different side of the sport than what you might be used to, calm your tits and open your mind. Believe it or not, touring is a big part of skiing these days—yes, even for freeskiers. If you haven’t spent time on the skin track yet or even given pin bindings a try, what are you even doing? And yes, the Locator Series still features twin tips, so you can still stomp a 180 and prove how core you are. 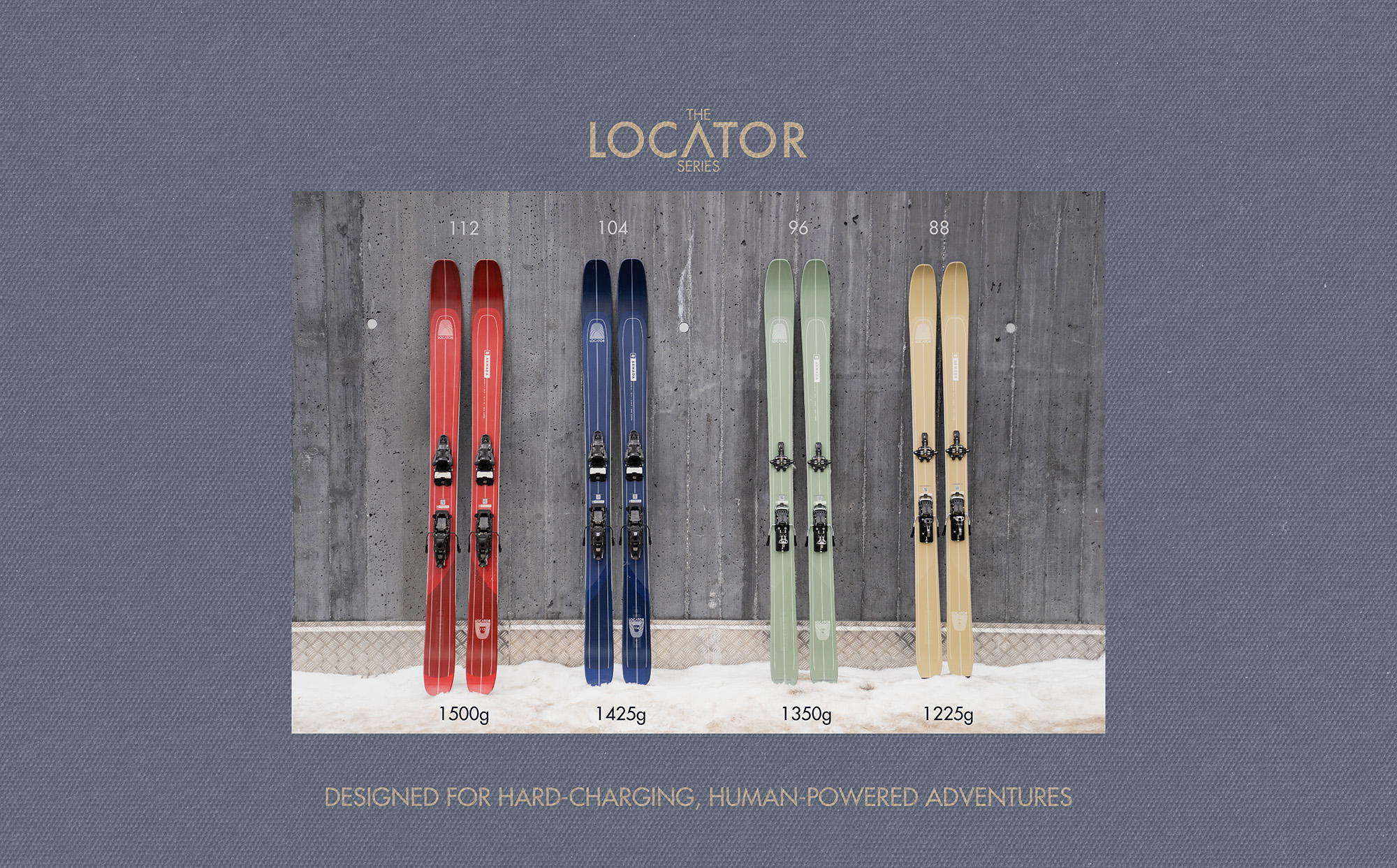 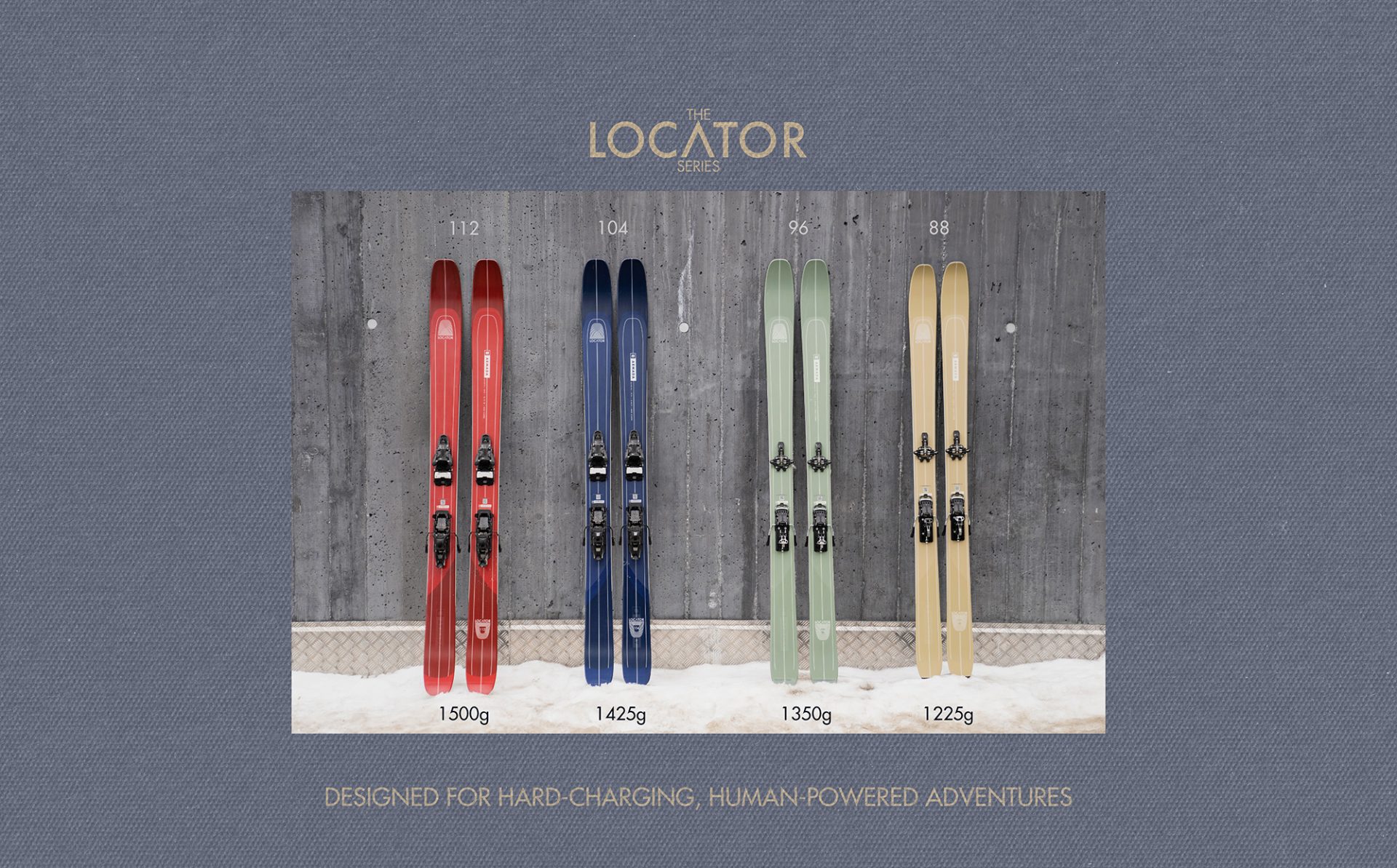 Four skis comprise the new line: The Locator 112, 104, 96 and 88  (you’re probably smart enough to figure out on your own that the names correspond to the waist width). In other words, a complete range from 88mm underfoot all the way up to 112mm, each ski fine-tuned to the needs of both uphill travel and downhill enjoyment.

Speaking of uphill, the most significant element of the Locator Series is no doubt the weight, or rather lack of it. Almost every ski in the line-up weighs in at under 1500 grams per ski, putting this series in direct competition with the lightweight touring options from other brands. This is due to the skis’ Coruba wood cores, as well as reduced-size 1.7mm edges and tapered AR75 sidewalls that reduce weight in the tips and tails while maintaining stability underfoot. Wherever there was weight to be cut on the Locator, Armada trimmed it off.

Of course, this is still Armada we’re talking about, so the Locator Series is still also built for the ride down, even after all the skimping on weight. The skis feature a longer, progressive sidecut of 20-24m that is paired with a “low and slow” rocker/camber profile. Armada says that these subtle design cues lend the Locator a perfect balance between grip & stability vs. “a loose feeling” and easy pivoting. There’s also a full carbon fiber overlay for increased strength, as well as titanium reinforcement underfoot.

Scroll on for a brief overview of the new Locator Series, or head straight on over to the Armada site for the full rundown.

The Locator 112 is the big dog of the family, built for deep snow and big terrain. Despite its girth, the 112 still weighs in at only 1630 grams per ski on the 187cm model. It’s not every day that you see a touring platform that’s this wide and still this light.

With a waist width in that Goldilocks zone between 100 and 110mm, the Locator 104 is bound to be a go-to touring platform for many of us: wide enough to hang on the the deep days, slim enough to tangle with whatever else Mother Nature’s got in store.

Moving into the sub-100 side of the range, the Locator 96 might appeal to those skiers who are more focused on maneuverability and performance when things get tricky, icy, steep or all of the above.

On the slim end of the scale, the Locator 88 is the lightest ski in the entire Armada range; just spitballing here, but it’s probably the lightest ski they’ve ever made. If “expedition,” “grueling” and “long-distance” are mainstays of your ski-touring vocabulary, this ski might speak to your needs.

Inbounds shredding to get you stoked for the season

Inbounds shredding to get you stoked for the season