big surprises on the men’s podium, A clinch win for France and a bitter defeat for Henrik Harlaut and Andri Ragettli… Here’s the recap of the finals!

After a touch of bad weather during the women’s qualifications on Friday, we were treated to magnificent sunshine for the end of the 2020 FIS Freeski World Cup slopestyle in Font-Romeu, France. Though firm conditions for much of the morning threw a wrench into the plans of some competitors, they didn’t stop others from putting on a magnificent show for the crowd of thousands of stoked French freeski fans that turned out to watch them.

On the men’s side, the final standings were a real shocker, with even the guy on top of the podium surprised at the result. Among all the big names in slopestyle on hand, it was a dark-horse competitor, Canada’s Mark Hendrikson, who bagged first place with a score of 86.3 points, securing the first podium finish of his World Cup career.

“I didn’t get the front 2 out on the last rail, but that didn’t matter,” said Henrickson. “I was happy with everything I did, I just put a clean run down, and it was enough I guess!”

In second place we find Jesper Tjäder, who put down a good first run with solid tricks in the rails including a disaster 450, continuing 270 on the down-flat-down that helped him post a score of 85.70. He wasn’t able to improve his score on his second run, but his first go remained good enough for the podium.

“I landed that run and didn’t think that it would be on the podium,” said Tjäder. “But everyone started crashing I guess… I don’t know, I’m really happy with it. It’s a good start.”

The young American Cody Laplante competed the podium, achieving the best result of his career on his sixth start at a World Cup with a run that scored 83.45 points. “I feel great!” said Laplante. “I wanted to show what I was capable of by sending the best possible run. It wasn’t the hardest, but I got it as clean as possible. So yeah, I’m glad to be here!”

Just as surprising as some of the names on the podium, were some of the big names that didn’t make it. The day was a minor disappointment for Swiss favorite Andri Ragettli, who finished just outside the podium in fourth. Henrik Harlaut, who made a great showing during Thursday’s qualifications, also had no luck in the finals. He made mistakes in both his runs, but that didn’t discourage him from showing what he was capable of in the rail section, with a crazy gap 630 out of the flat-down rail.

“I felt horrible on the first run, and I’m not really happy with my second one,” said Harlaut. “I crashed and I messed up the second rail, but it’s okay. I hope next time it won’t be so icy!”

Swiss rider Kim Gubser tossed the only triple of the event in his second run, but ended up in 10th place with a score of only 75.20. “For me it was a perfect run, but the rail features didn’t work as expected,” said Gubser.

It was a sick final on the women’s side, with a good level and lots of stylish tricks in the jump section. And finally, some good news for the French team as Tess Ledeux brought home the gold.

Since the start of this competition and disappointing results in the qualifiers, a shadow had fallen over the French team. During Tess’ first run, it seemed this curse was still in play when she made a mistake in the rail section. But the Savoyard rider delivered with a heavy second run where she showed the full extent of her talent. Switch 900 mute grab, 900 true tail, switch bio 900, 450 out on the bonk, switch-up on the flat down and 270 out on the down-flat-down, Tess’s run was near-perfectly executed, earning her the score of 81.25. This is the third time in four editions that the young Frenchwoman has won at Font-Romeu.

“I’m super happy!” reported Ledeux. “I was super stressed after my first run, so I’m super happy to have made it to the bottom on the second one!” 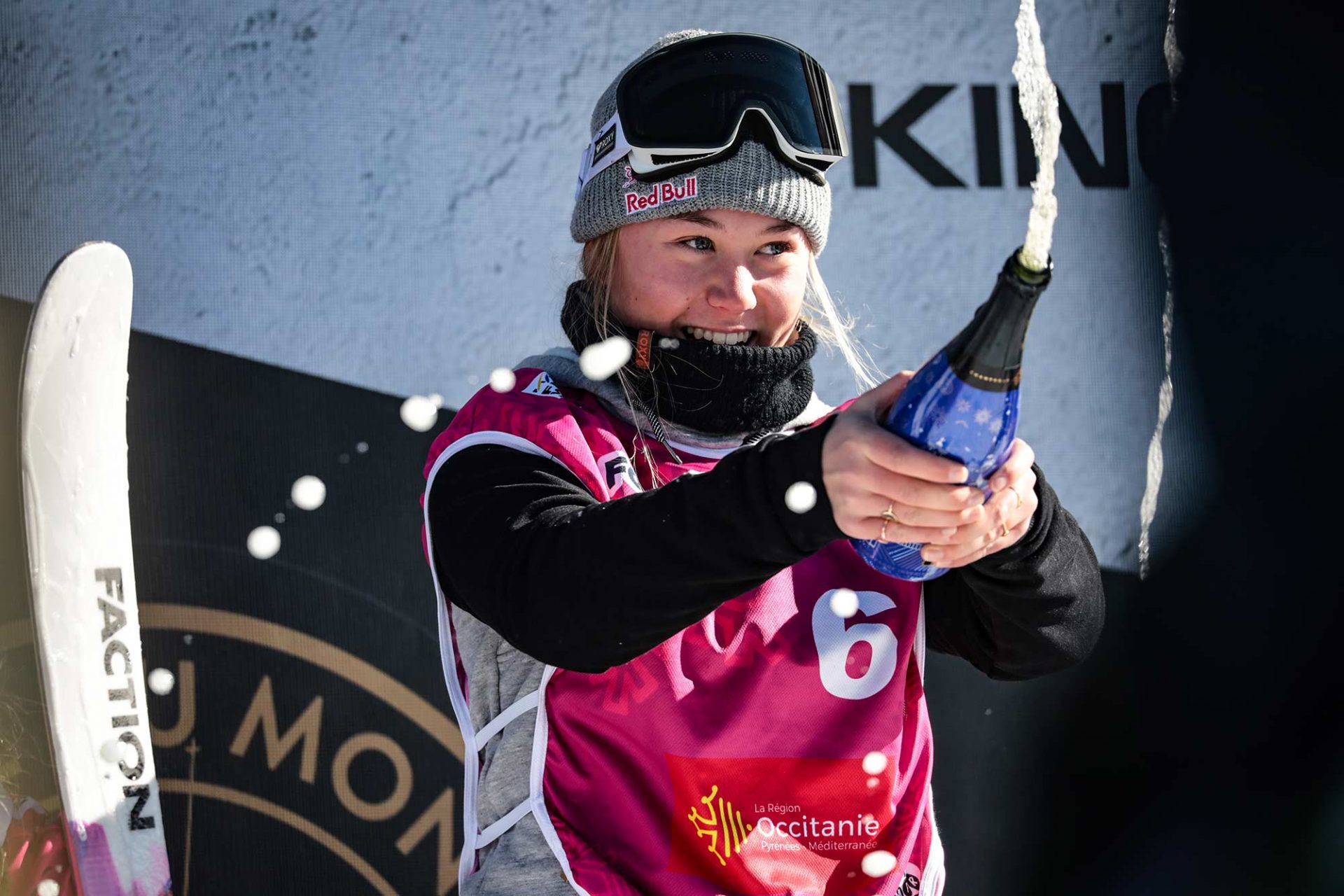 The two Swiss women who completed the women’s podium aren’t just anyone… Giulia Tanno, long at the top of the scoreboard after an impressive first run, ended in second place after Tess unseated her. “It’s pretty surreal because I didn’t do the run I wanted the way I visualized it,” said Tanno. “So I’m really happy with the result!”

She was followed on the podium by Sarah Hoefflin, the winner of Friday’s qualifications. The 29-year-old rider took third place with 74.95 points thanks to a very good first run. “I would have liked to land my switch 1080 on the 2nd run,” said Hoefflin. “It didn’t work, but that doesn’t matter! I’m here to ride, so it’s cool.”

The annual visit by the Freeski World Cup is a major highlight for this small resort in the French Pyrenees. Thousands of onlookers packed the slopes for the show, with many traveling long distances to take in the spectacle of world-class slopestyle skiers.

“We drove for three hours just to see the show,” said Thomas, who came with his friends from Toulouse to watch the contest before heading for a nearby party. However, a solid three quarters of the spectators were locals like Mathis. “I’m here to see my idols,” he said. At the bottom of the slopestyle course, hundreds of kids like Mathis lined up to see their favorite riders, take photos and maybe snag an autograph.

“It’s important for us to have this kind of event in the Yyrenees,” explained Clement, a local freeski fanatic. “It shows that we can make this happen here, too, and that we are capable of doing big things even here in Font-Romeu.”

“And of course, it helps us to have a great park!” added Clement’s friend Aymeric with a laugh. “We will see how it is after the finals!”

Here in Font-Romeu, this kind of event is very important for the ski community. As I witnessed throughout the week, it brings a lot of fun and excitement to this little French family ski area. 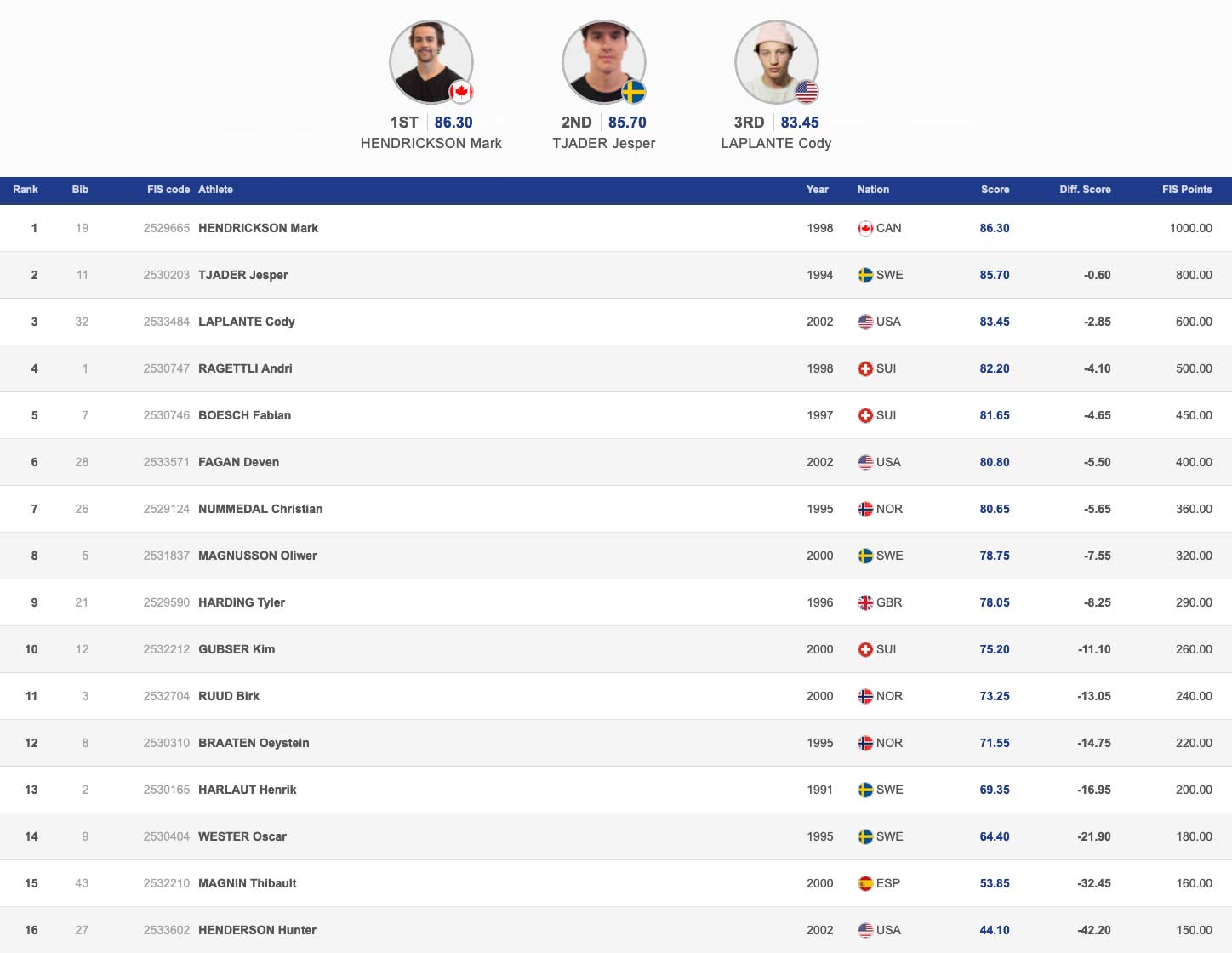