Nock’N’Rock 2017: Gathering of the Rock Stars

Nock’N’Rock 2017: Gathering of the Rock Stars

A snowpark of the highest order, top-notch riders, only the weather didn’t play along too well – still, the participants of this year’s QParks Tour Stop at the Turracher Höhe proved themselves as proper Nock’n’Rockers. Despite the cloudy weather they came up with plenty of gnarly runs.

Currently, the contest season’s in full swing – we’ve just reached the half time of the QParks Tour! Last Saturday the fifth stop took place at the Turracher Höhe, the ski resort located at the border between Styria and Carinthia. Unfortunately, the bluebird day everybody was hoping for was hiding behind a thick wall of clouds. For true shred heads that’s no reason to stay at home and chill, though. Besides, park designer Hilton Scott and his crew did an amazing job on the setup and provided the riders with a perfectly shaped contest line. It kicks off with an 8m down rail, followed by the jump line, which consisted of a total of 6 kickers: 3m and 5m at the first knuckle, 5m and 8m at the second knuckle and 7m and 10m at the third. At the end of the line, the riders had the choice between a challenging 18m Multi Industry Rail and a Lollipop Jib. 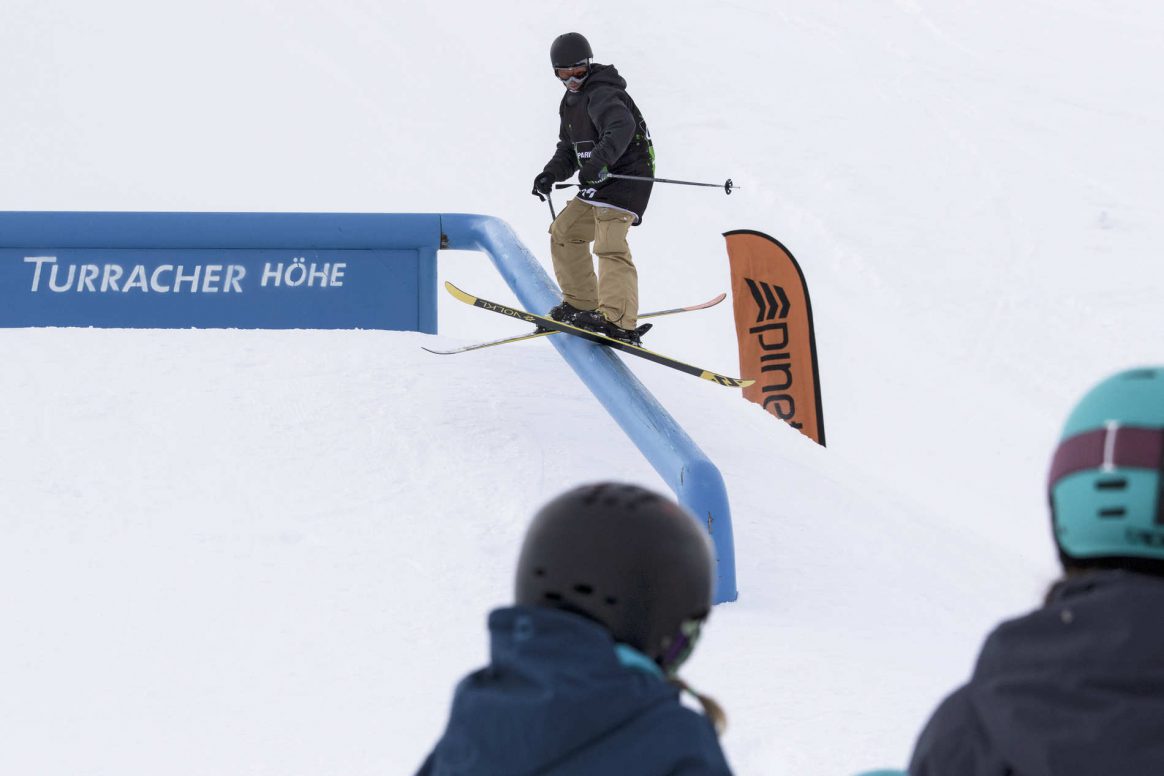 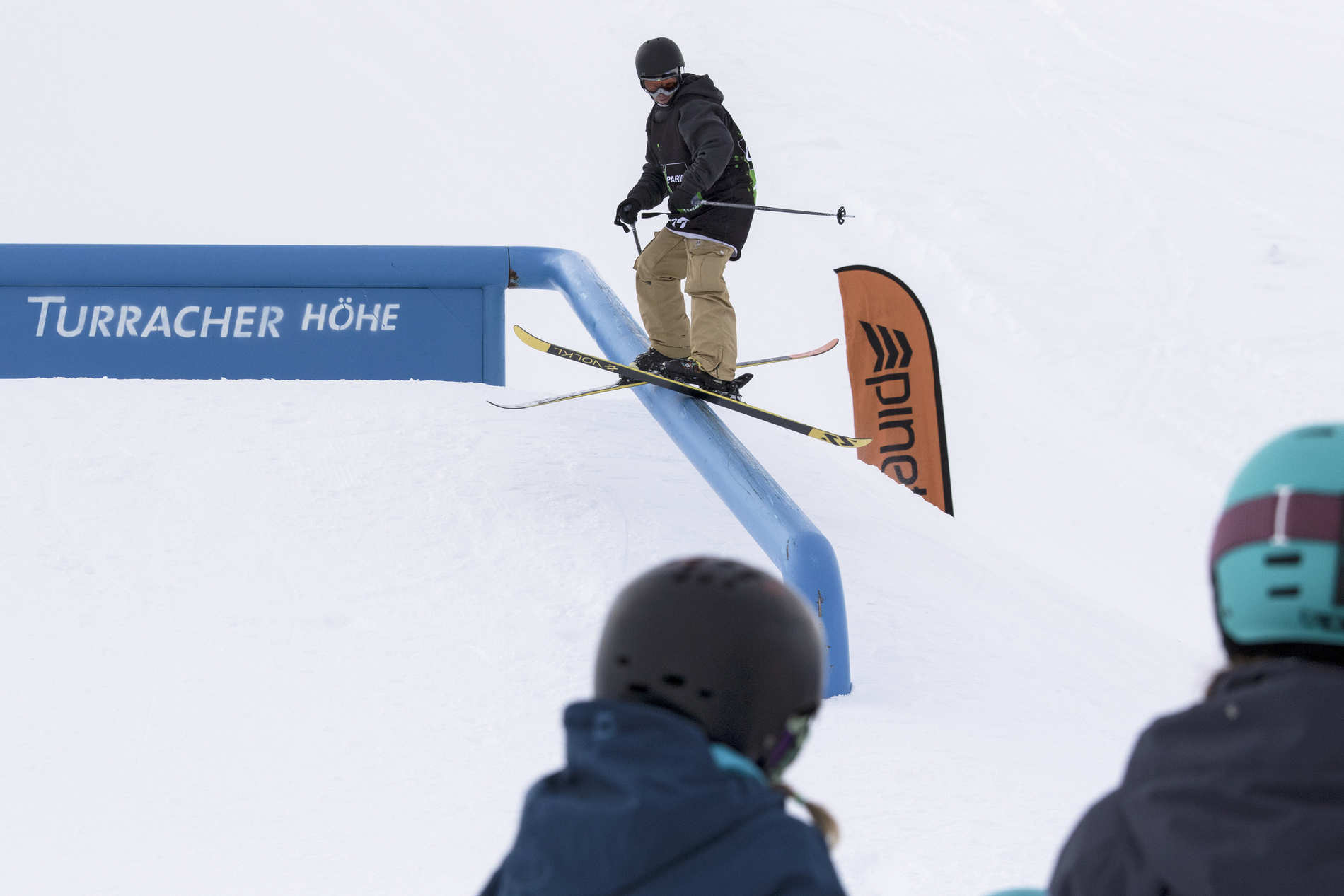 Riders from 4 Nations were pulling off their best moves in order to bag the coveted tour points, the cash prize of a total of 1.200€ and lots of cool goodies by Goodies von AMPLIFI, Downdays, Pinetime Clothing, QParks and WeAre. 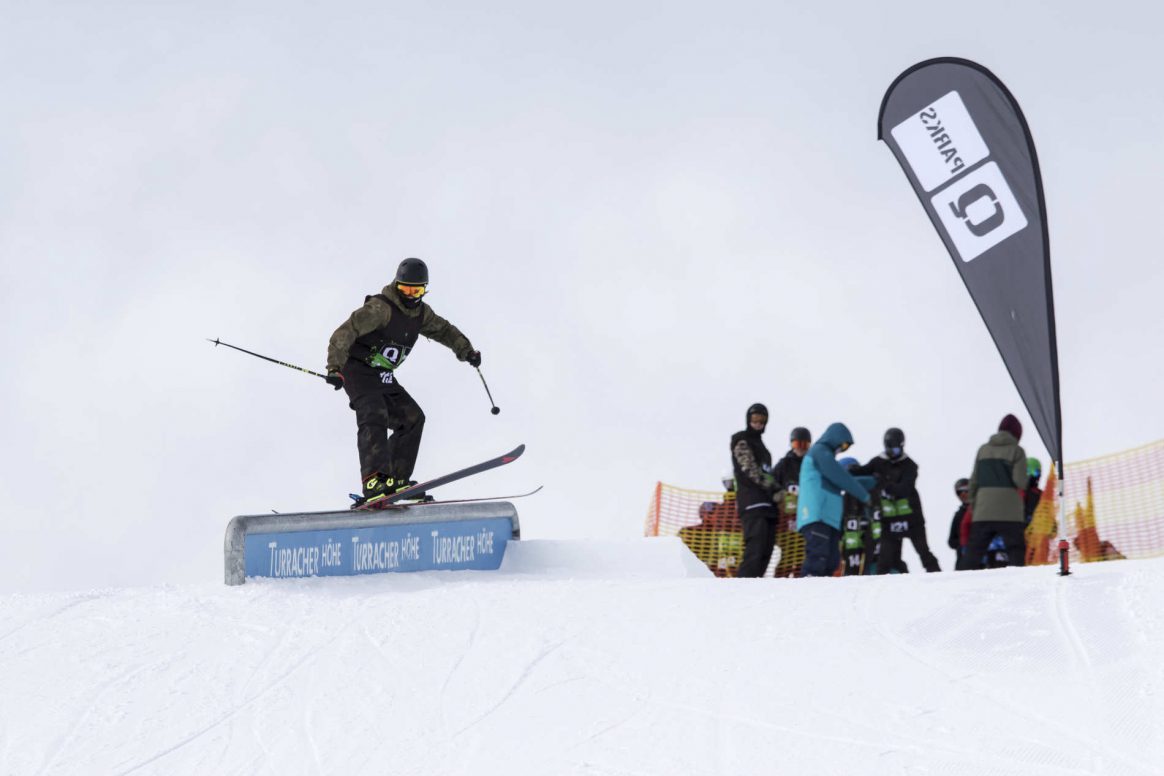 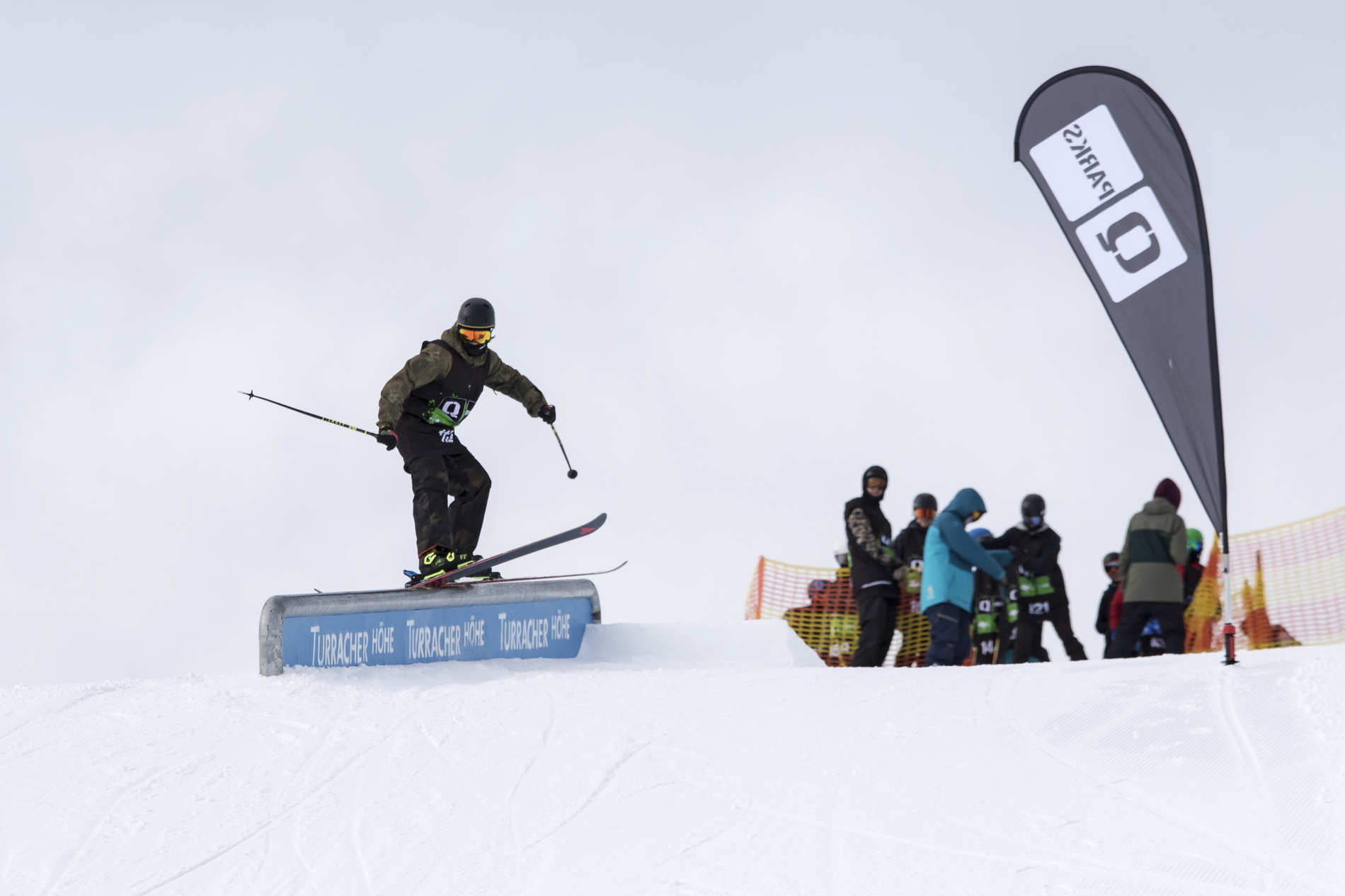 Freeskiers from four nations were battling each other for the cash, the goodies and the desired points for the QParks Freeski Tour and the ÖSV Freeski Cup. In the end, it was only the Austrians who were able to climb the podium, though. Third place went to Hannes Rudigier, Peter Tschallener got second and Sebastian Mall came out as the winner. In his final run, he managed to land a 270 onto the down rail, a Rightside 540 Reverse Tailgrab over the first kicker, a Switch Left Cork 5 safety over the second kicker, a Left Cork 7 Blunt and topped it off with a Frontside Switch up on the Multi Industry Jib. This run didn’t only get him the first place but the Best Trick award as well. The lucky winner went home with the princely sum of 400€ in total.

At the Ladies competition it was also three Austrians who bagged the top 3 spots. Tamara Schmid got first, followed by Selina Jäger and Patrizia Holzmann. First place in the Groms Men category went to Elias Wechner. Nico Huber and Manuel Sailer joined him on the podium. Elias‘ winning run included a Frontside 270 on the Downrail, a Switch Rightside 5, a Rightside 3 safety, a Rightside 7 and a Rightside 5 on the Lollipop Jib. 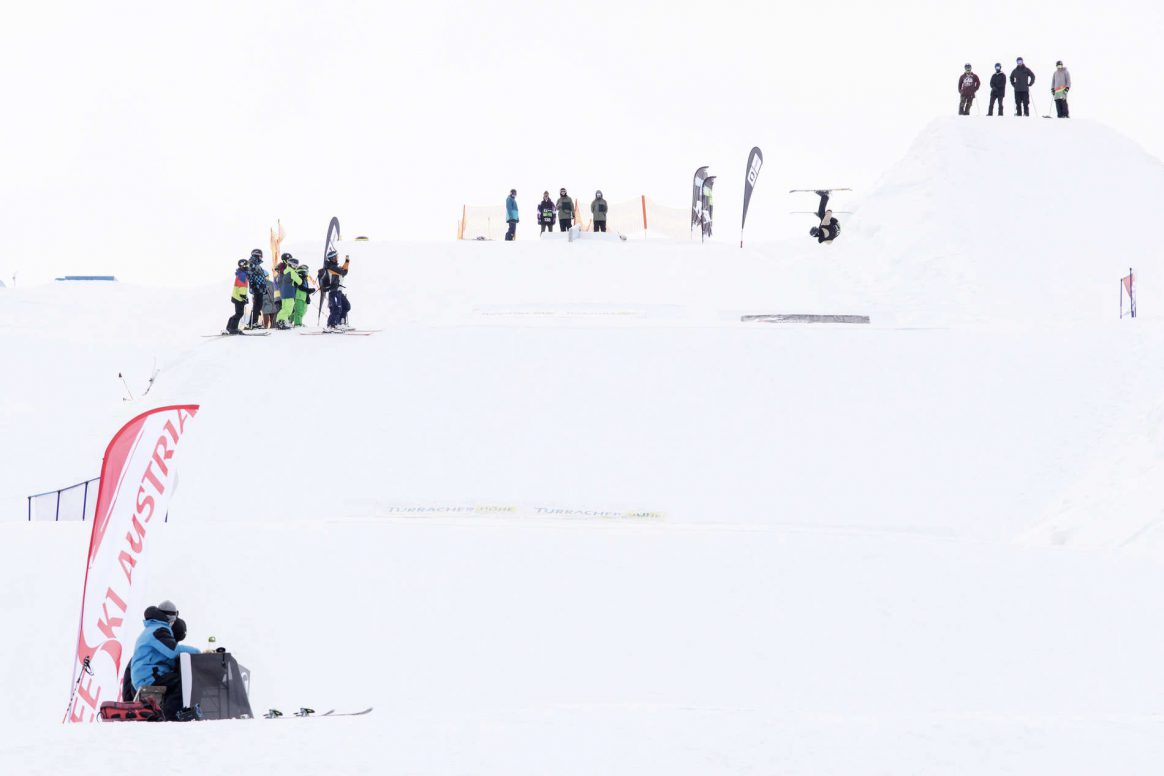 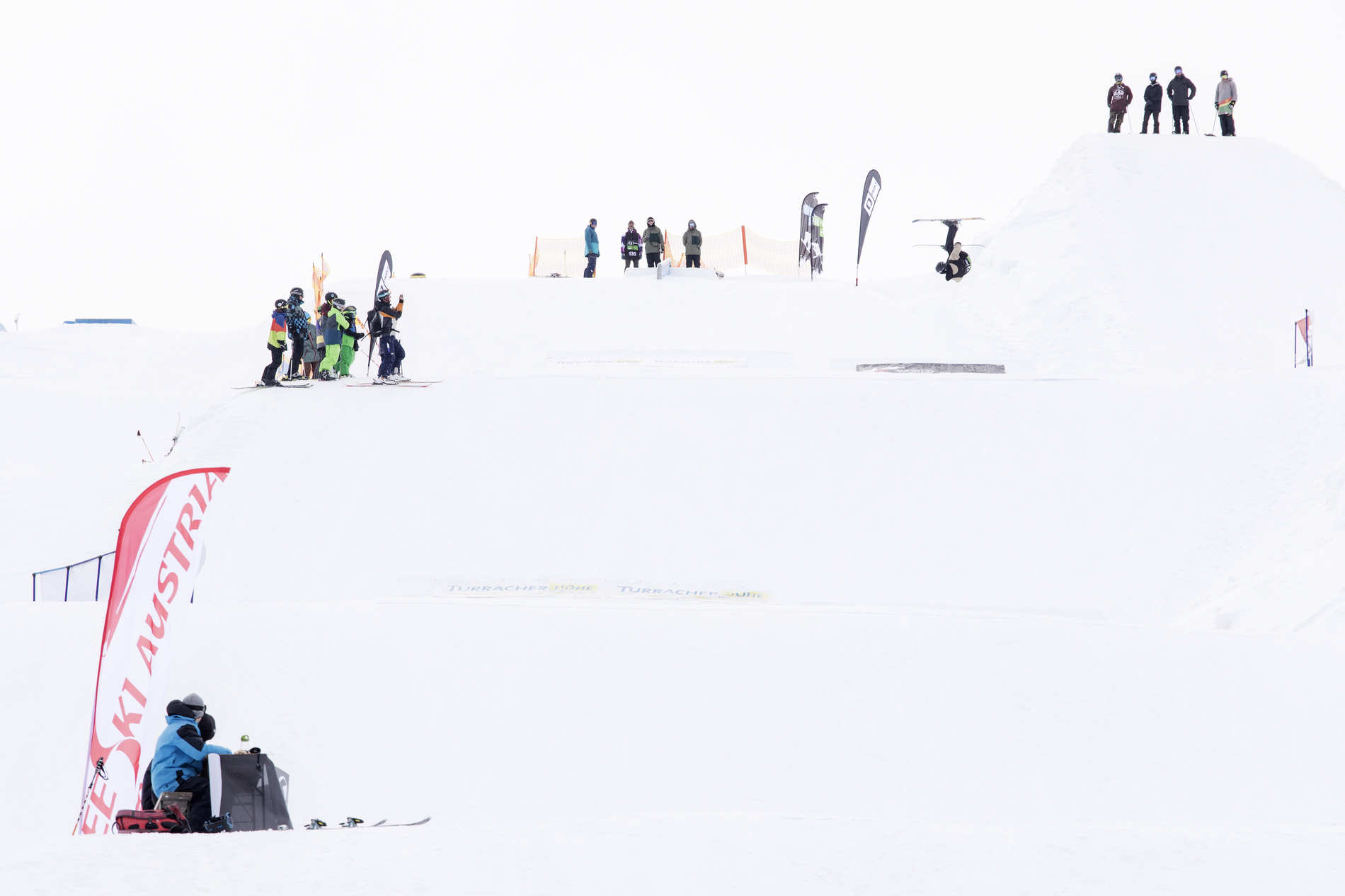 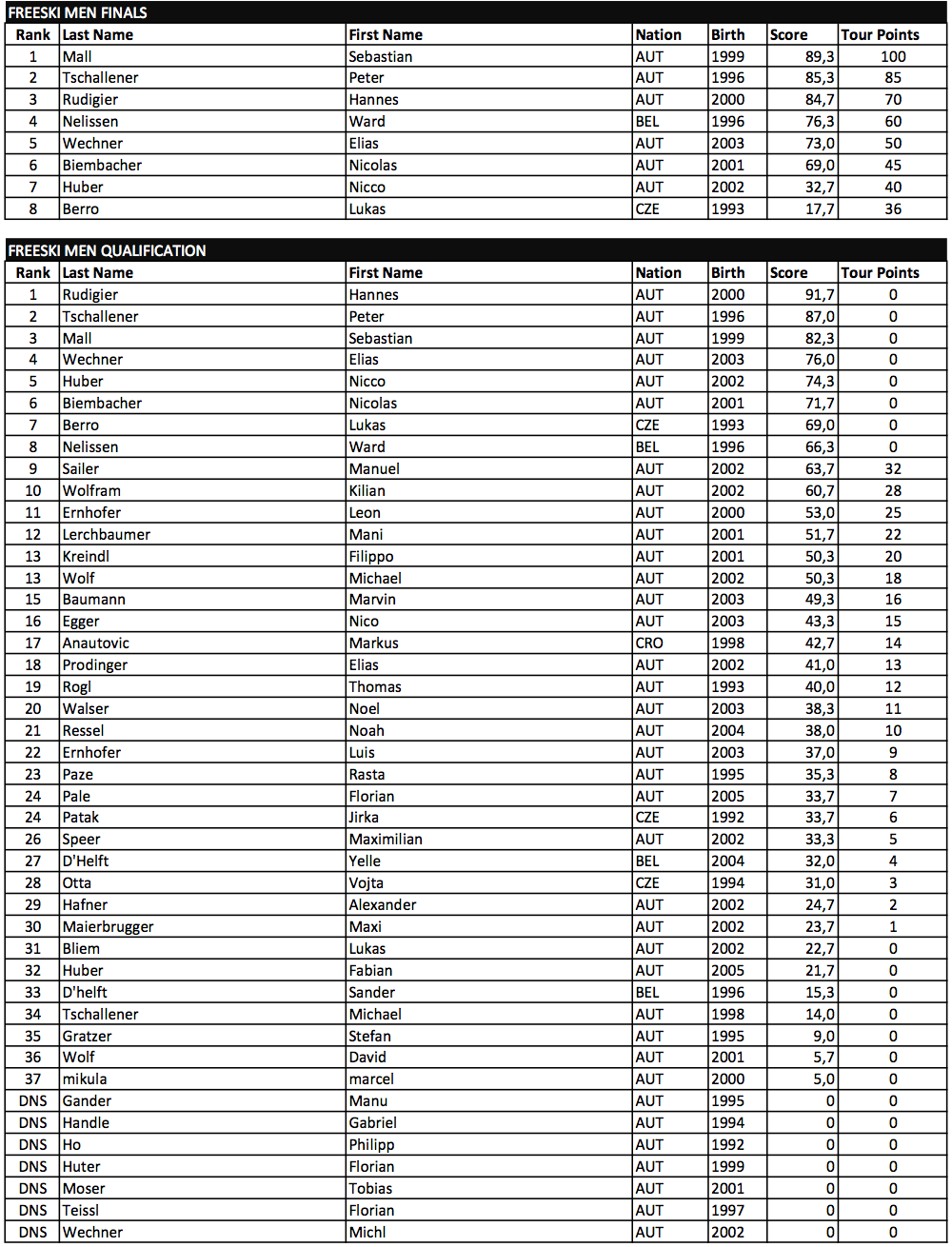 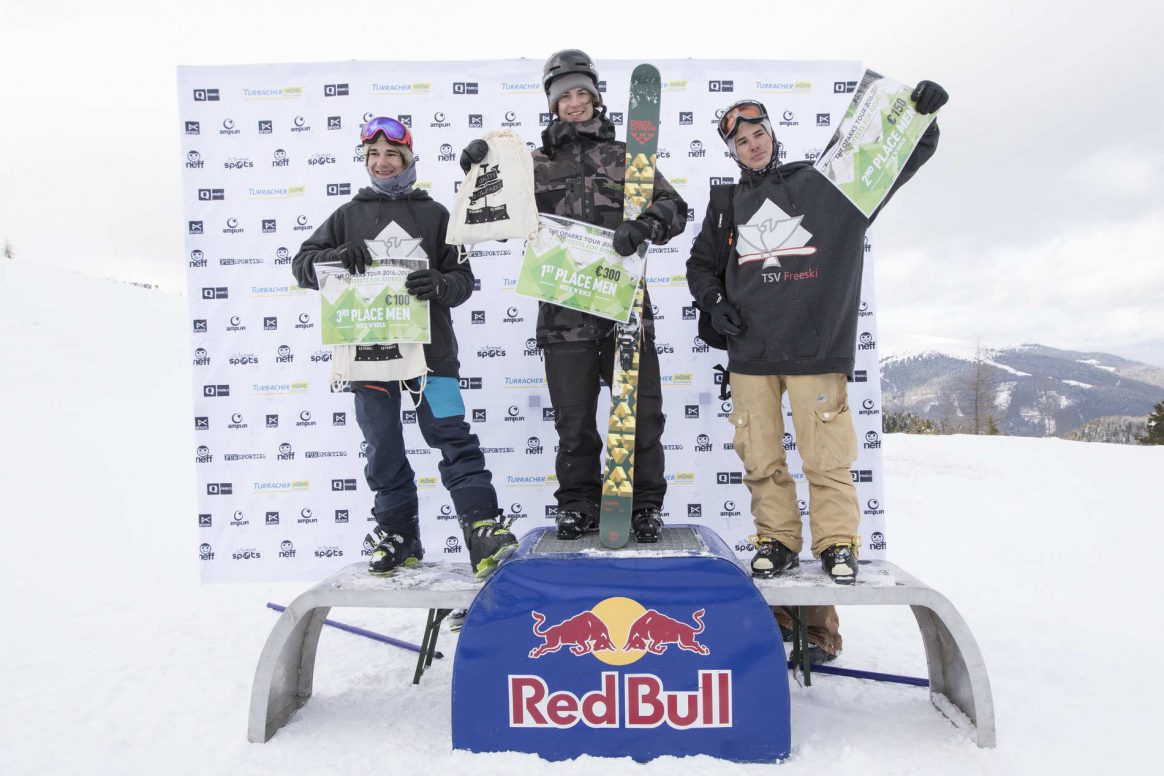 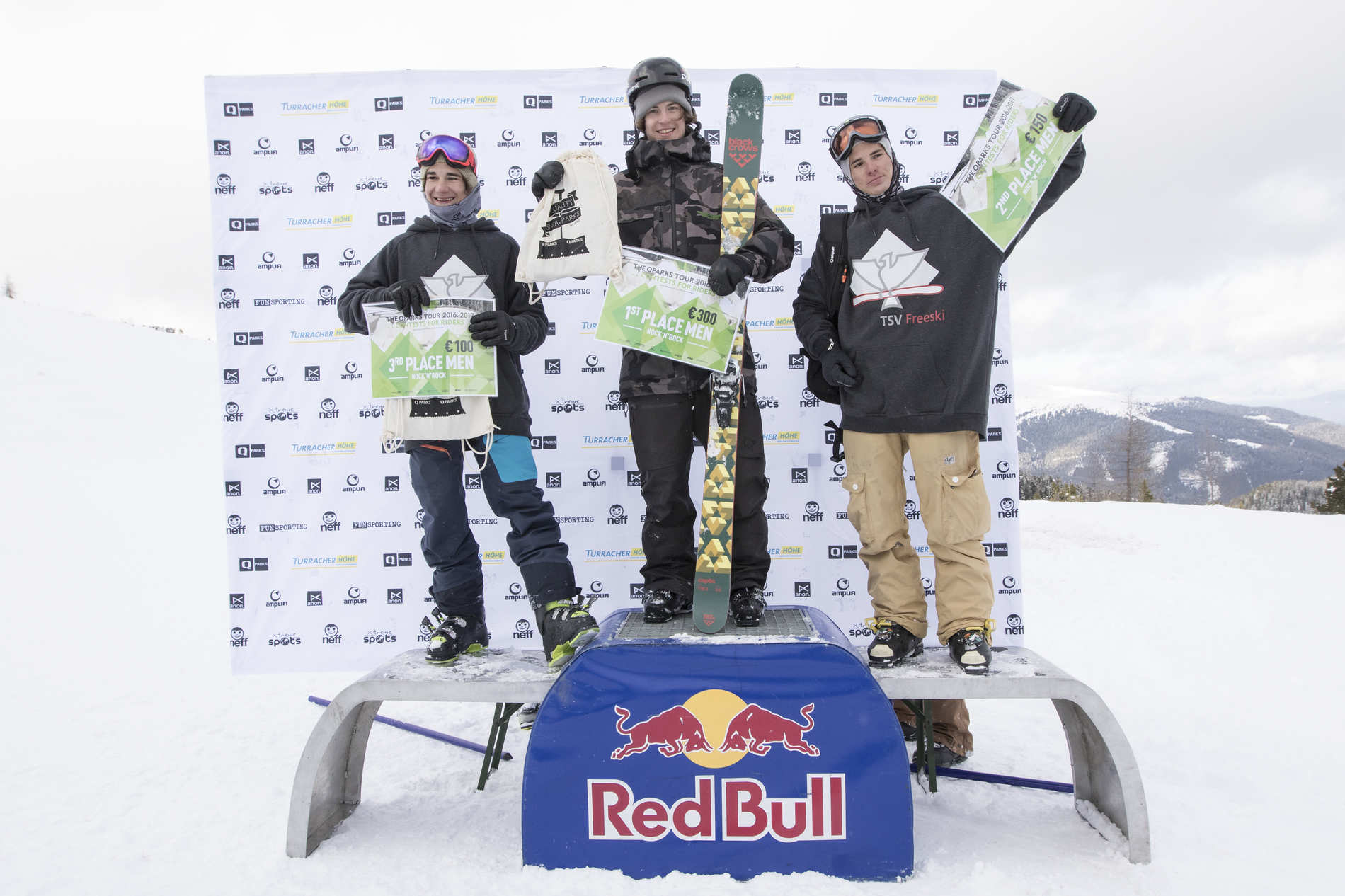 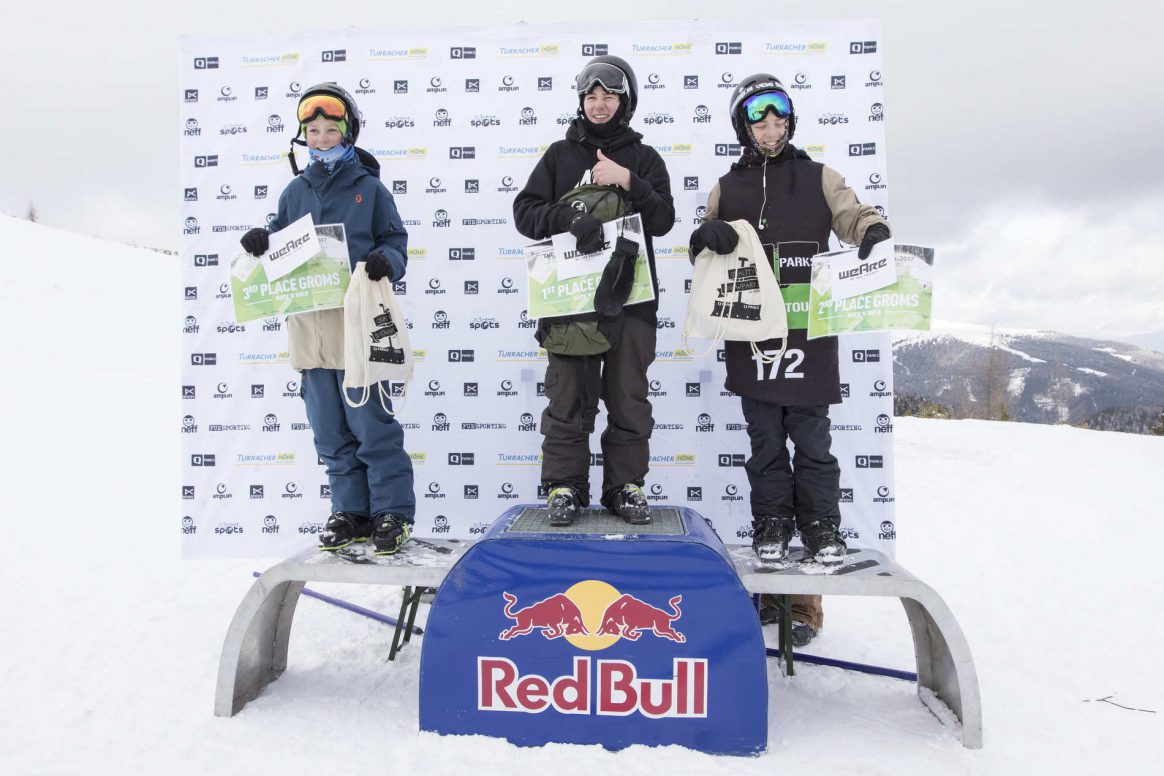 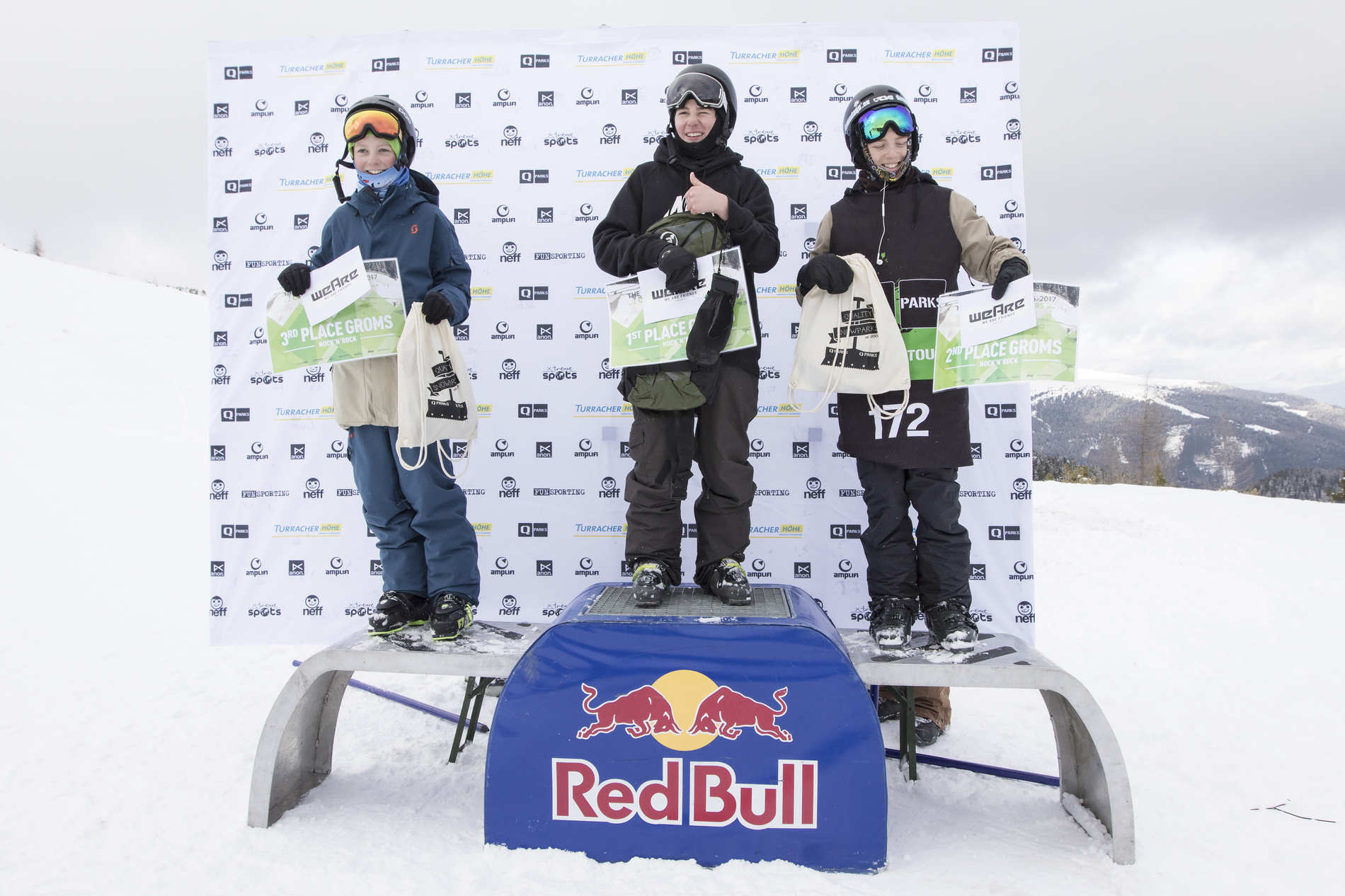 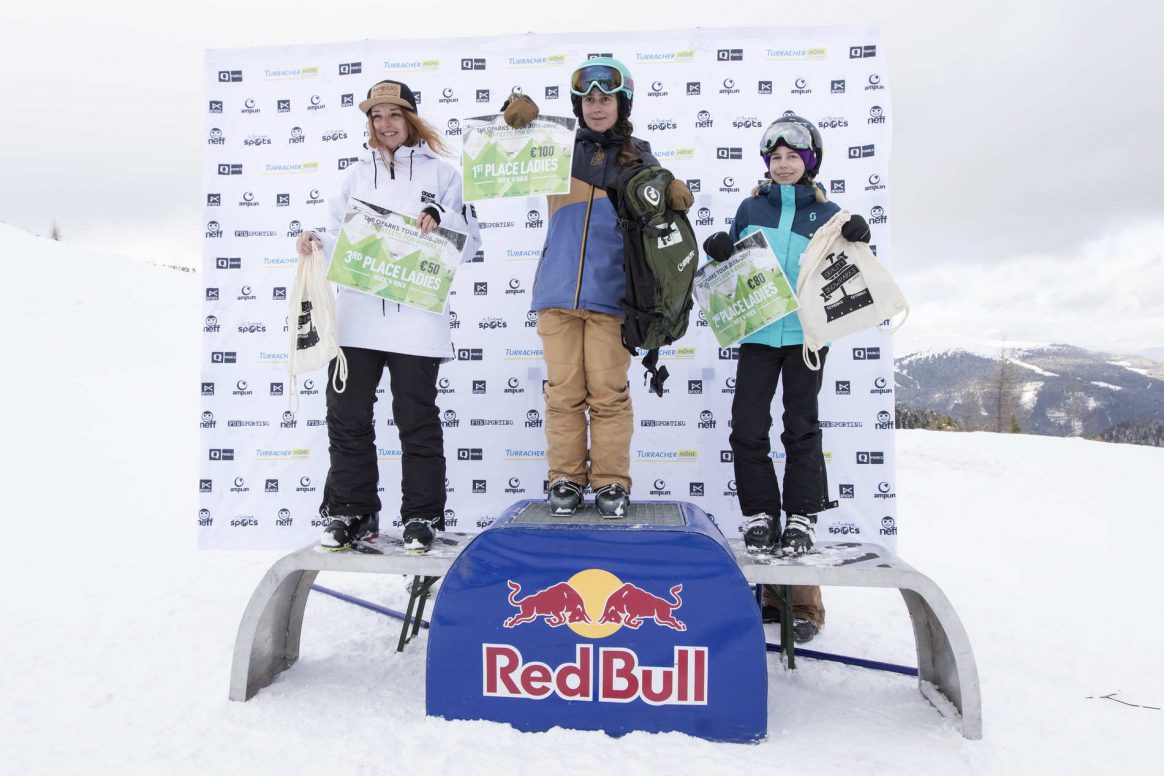 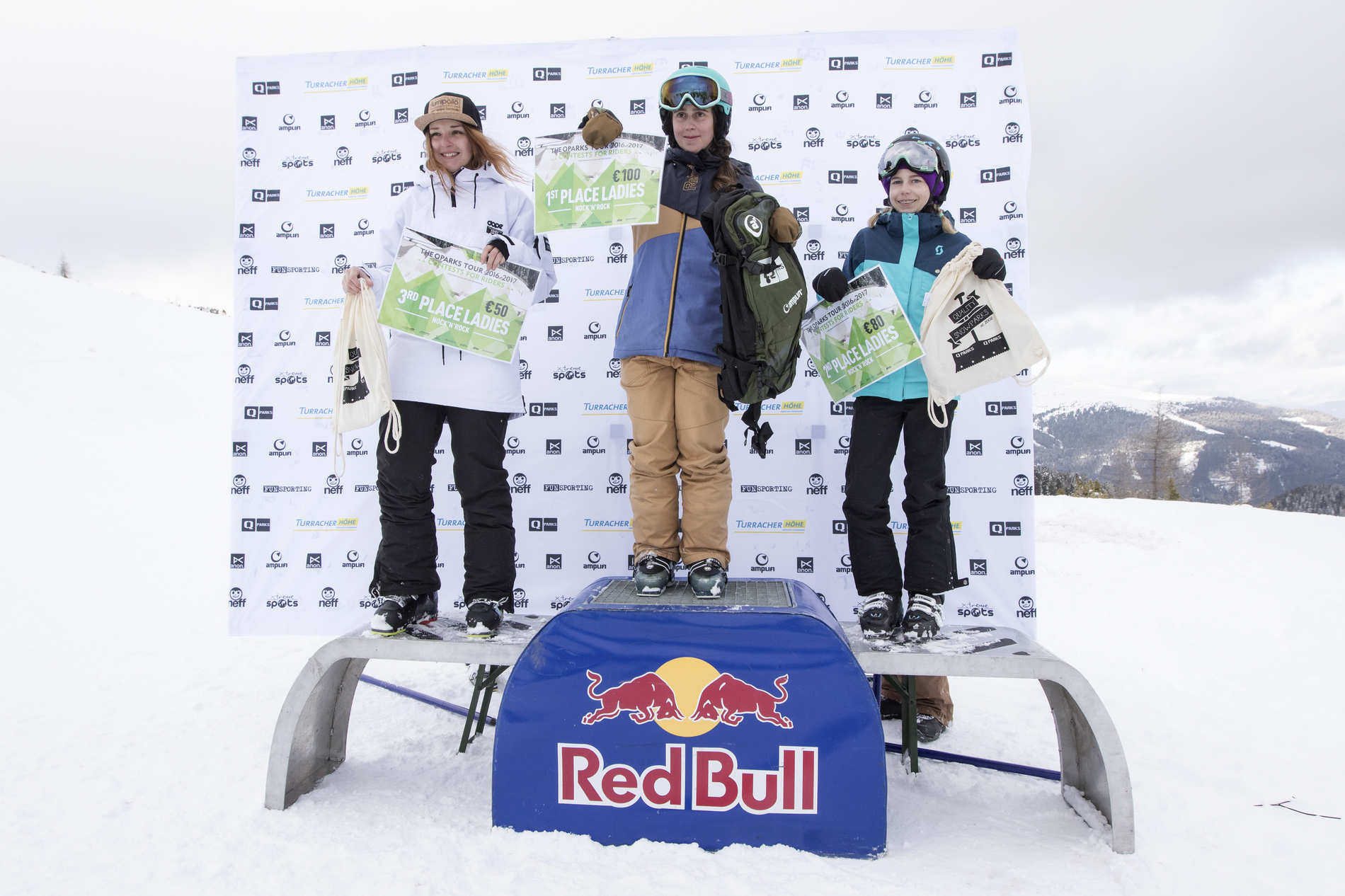 Next weekend the QParks Tour enters its next round, on February 18 2017 in the form of the Sick Trick Tour Open at the Snowpark Kitzbühel.

For further news on the QParks Tour check out