Mathilde Gremaud on her way to a silver medal in the women's finals. All photos: courtesy of U.S. Freeskiing

On the heels of the halfpipe finals, skiing action continued at the 2021 FIS Freestyle World Championships with the highly anticipated Slopestyle Finals on Saturday, March 13.

The World Champs took over the Aspen course where the X Games slopestyle was held six weeks ago, with a few key changes. The rail section was new and the jump line was revised to feature three straight-on jump takeoffs, replacing the two side-hit takeoffs that had challenged riders at X.

The contest schedule featured alternating runs between the men’s and women’s field. The day’s action began with the field of eight women’s finalists under mostly sunny skies, although the weather soon took a turn for the worse.

Sweden’s Sandra Eie crashed in the rails and Germany’s Lara Wolf scored a run in the low 50s before defending world champ Tess Ledeux of France put down the day’s first big run, stomping a switch left 1080 japan and a switch right bio 900 before closing with a massive leftside double cork 1260 mute to score a 74.95.

American rookie Marin Hamill showed off her prowess in the rail section, sliding into second place behind Ledeux, while 16-year-old rookie Kirsty Muir of Great Britain also put down a run. But it was Ailing Eileen Gu who vaulted into the pole position, stomping a flawless rail section filled with 270s on and off, as well as switch and forward 900s in the jumps, to move into first with a score of 84.23. 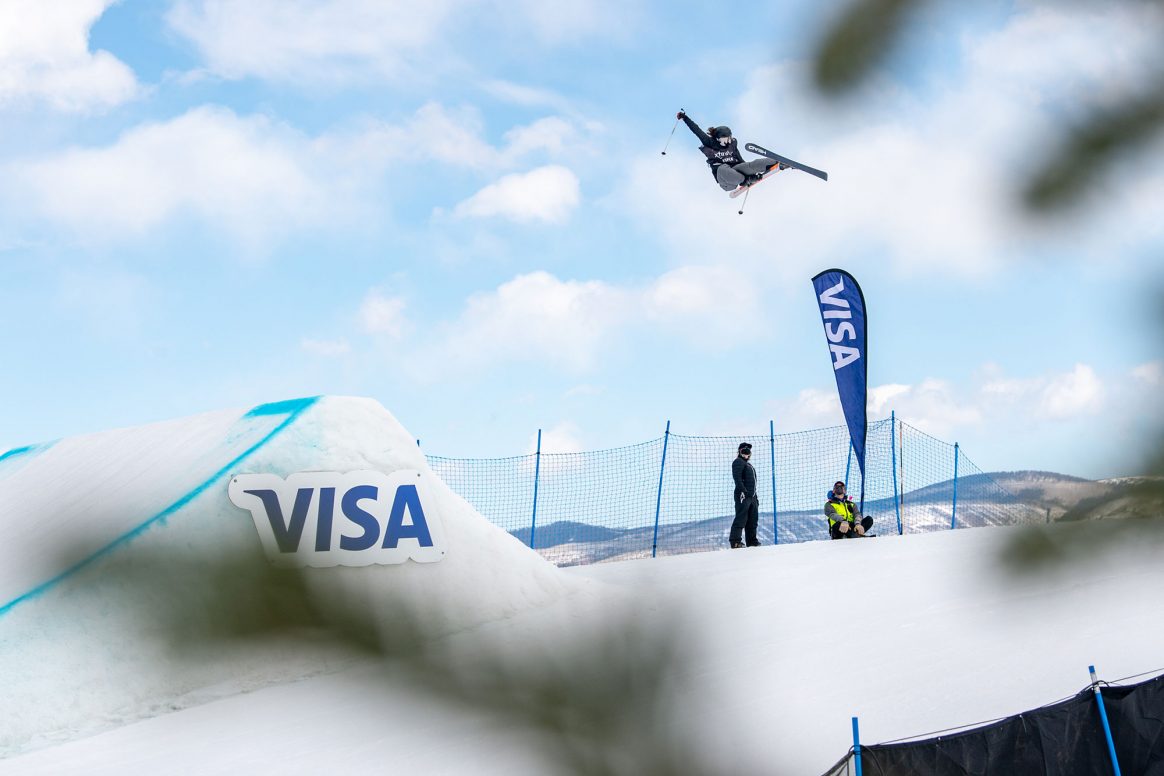 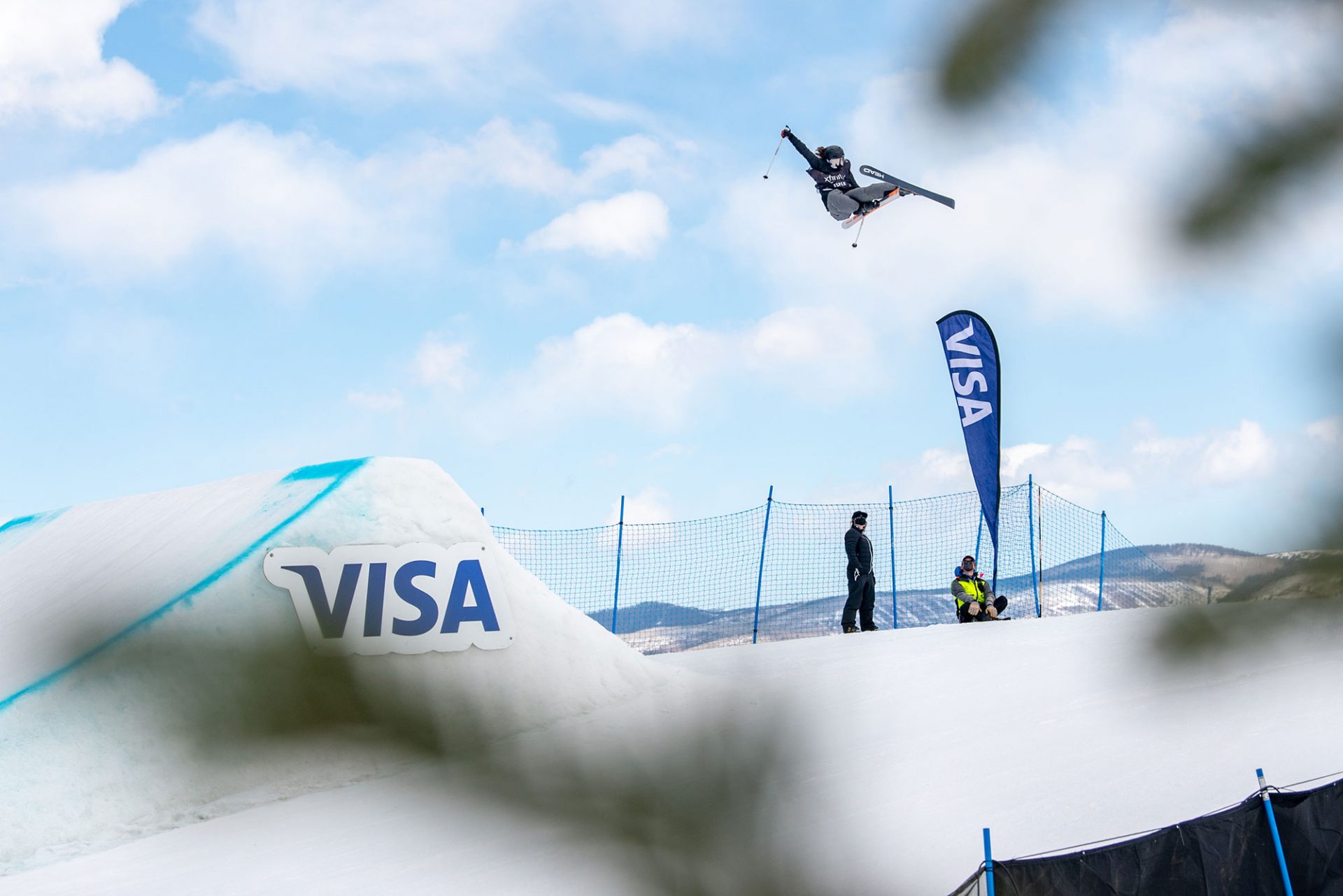 Marin Hamill's switch 540 japan was easy on the eyes. 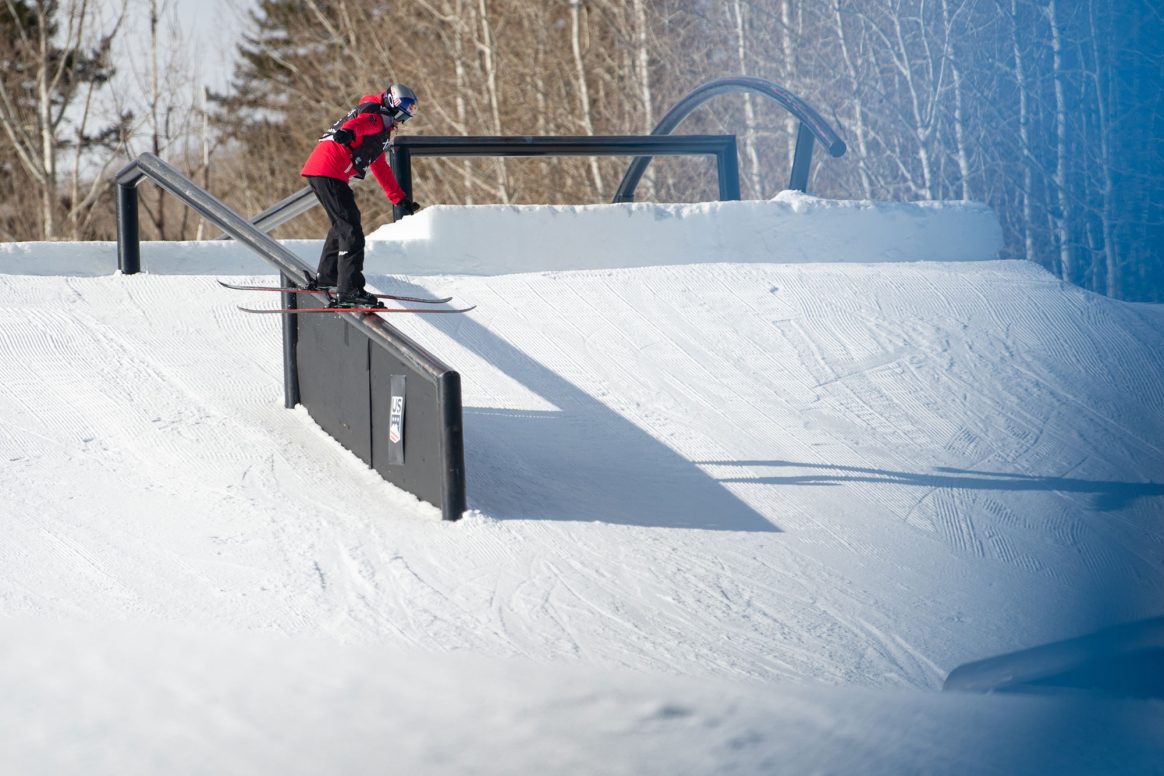 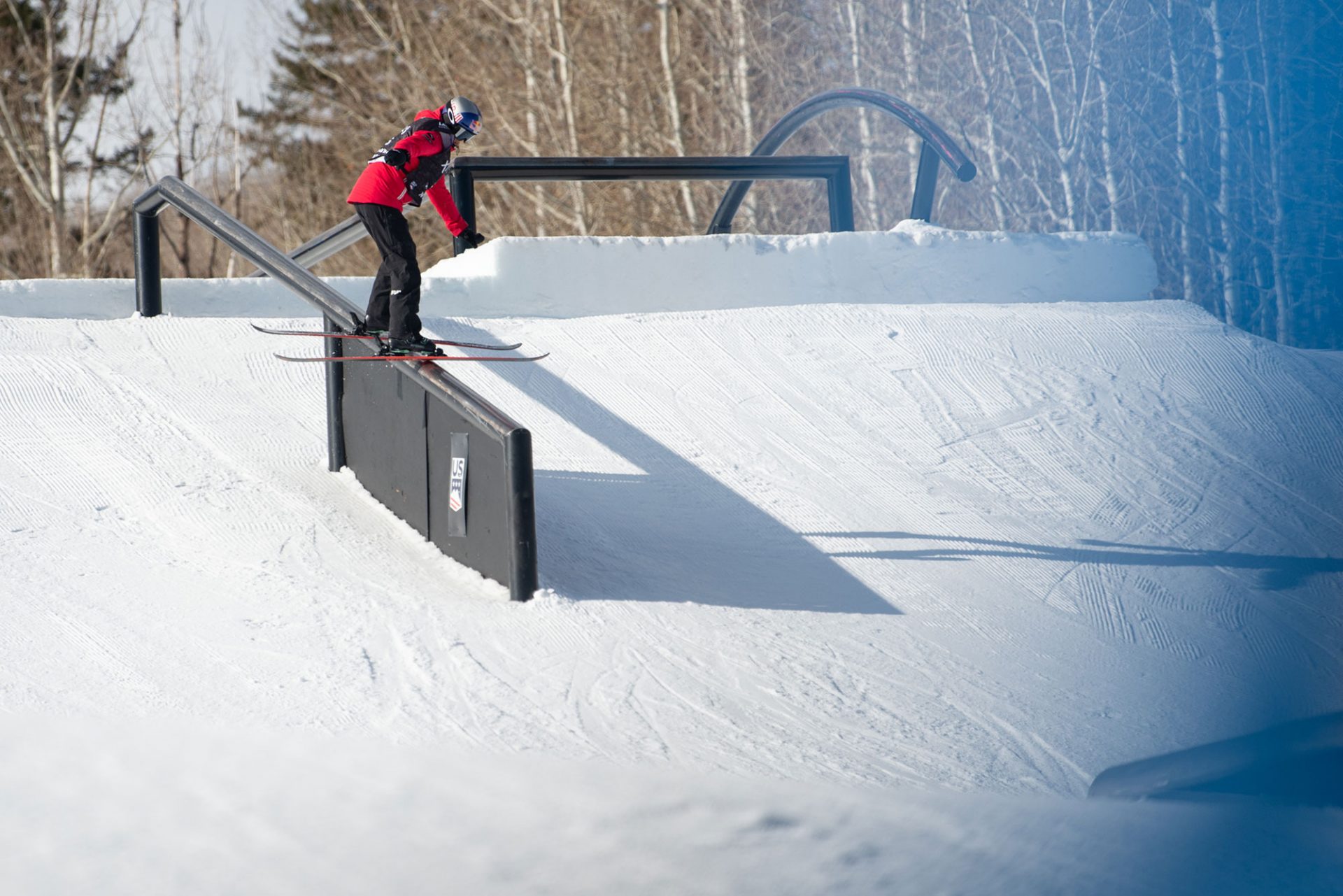 Though her jumps were clean, it was her prowess in the rails that really set Eileen Gu apart from the rest of the pack.

In the second run, Switzerland’s Mathilde Gremaud put down a safety run to advance into second place, opting for a switch 720 on her final hit rather than her switch double. Canada’s Megan Oldham also logged a run to move up the standings. Sandra Eie landed a surprise double cork 10, but didn’t have enough pep elsewhere in her run to impress the judges, and Lara Wolf and Eileen Gu both crashed on their own double cork attempts. 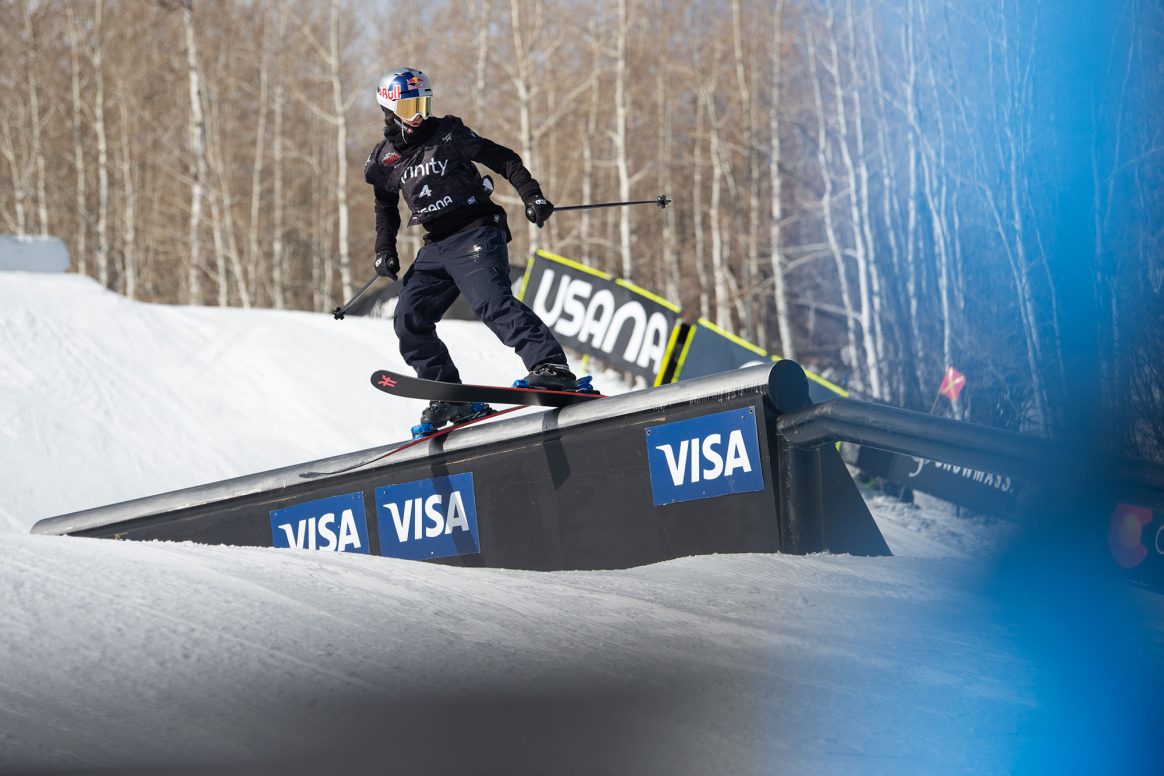 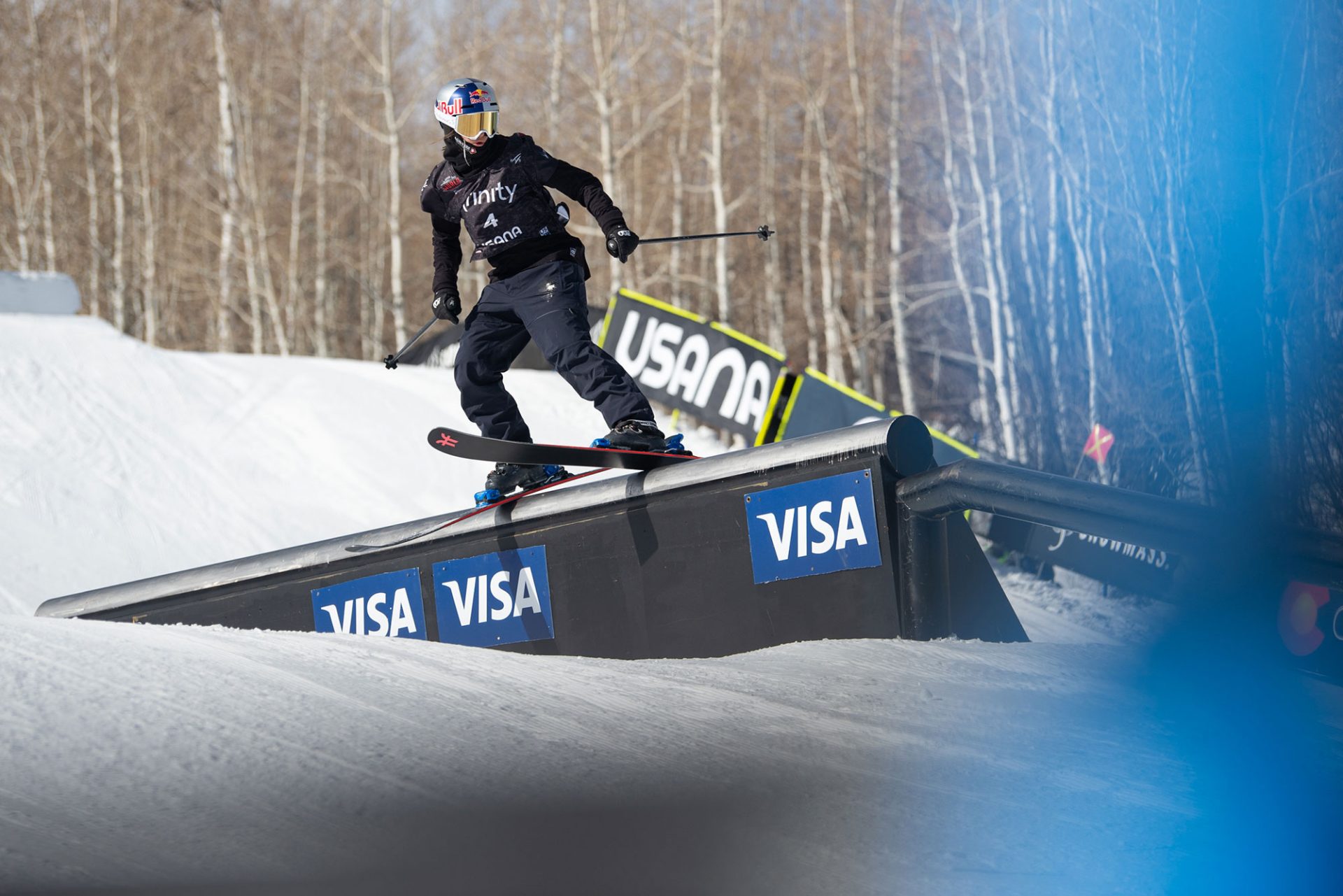 Mathilde Gremaud's front swap transfer on this rail combo was one of the more tech tricks of the women's final.

With one run left to go, Gu led the leaderboard, pursued by Gremaud and Ledeux. Ledeux took a hard crash on her double cork and was unable to advance, while Megan Oldham stomped a massive double cork 1260 mute of her own, bumping Ledeux out of third place. With the wind picking up on course, Mathilde Gremaud’s attempt to knock Gu out of the top spot was stymied by some untimely gusts, leaving Gu to take a victory lap on her final run, as she became the first freeskier to win two gold medals at one World Championships. (Click here for the full results from FIS.) 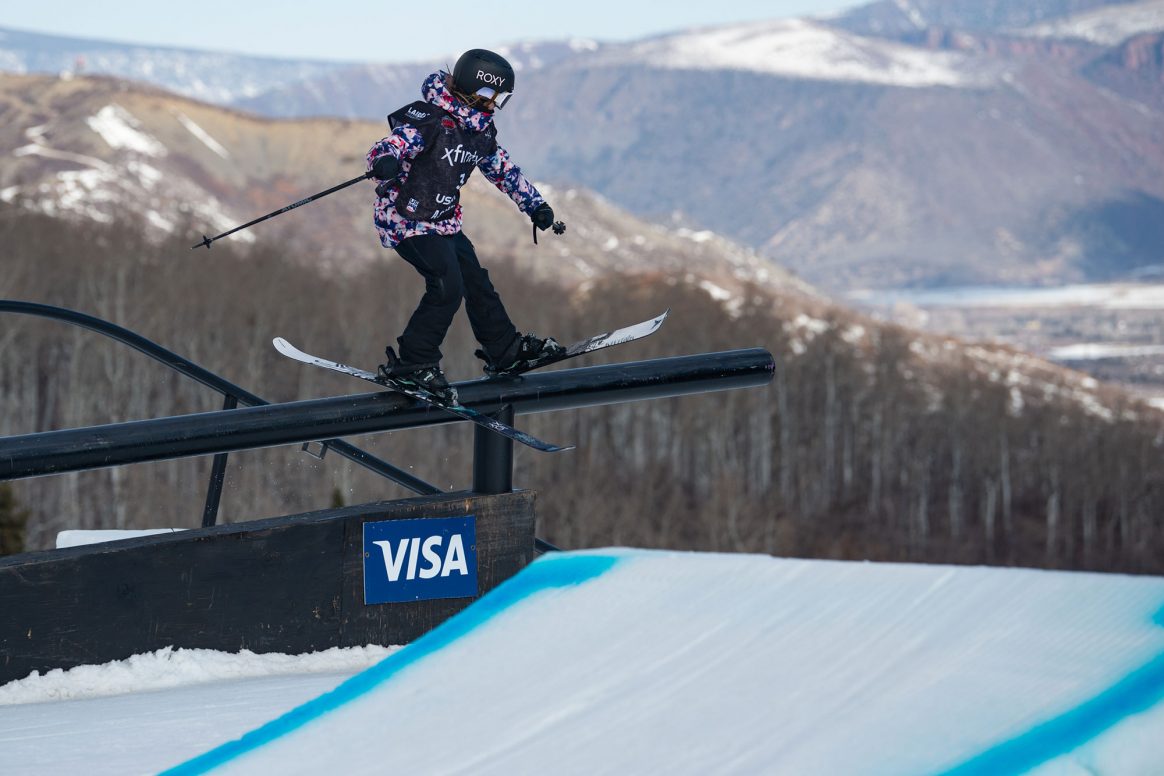 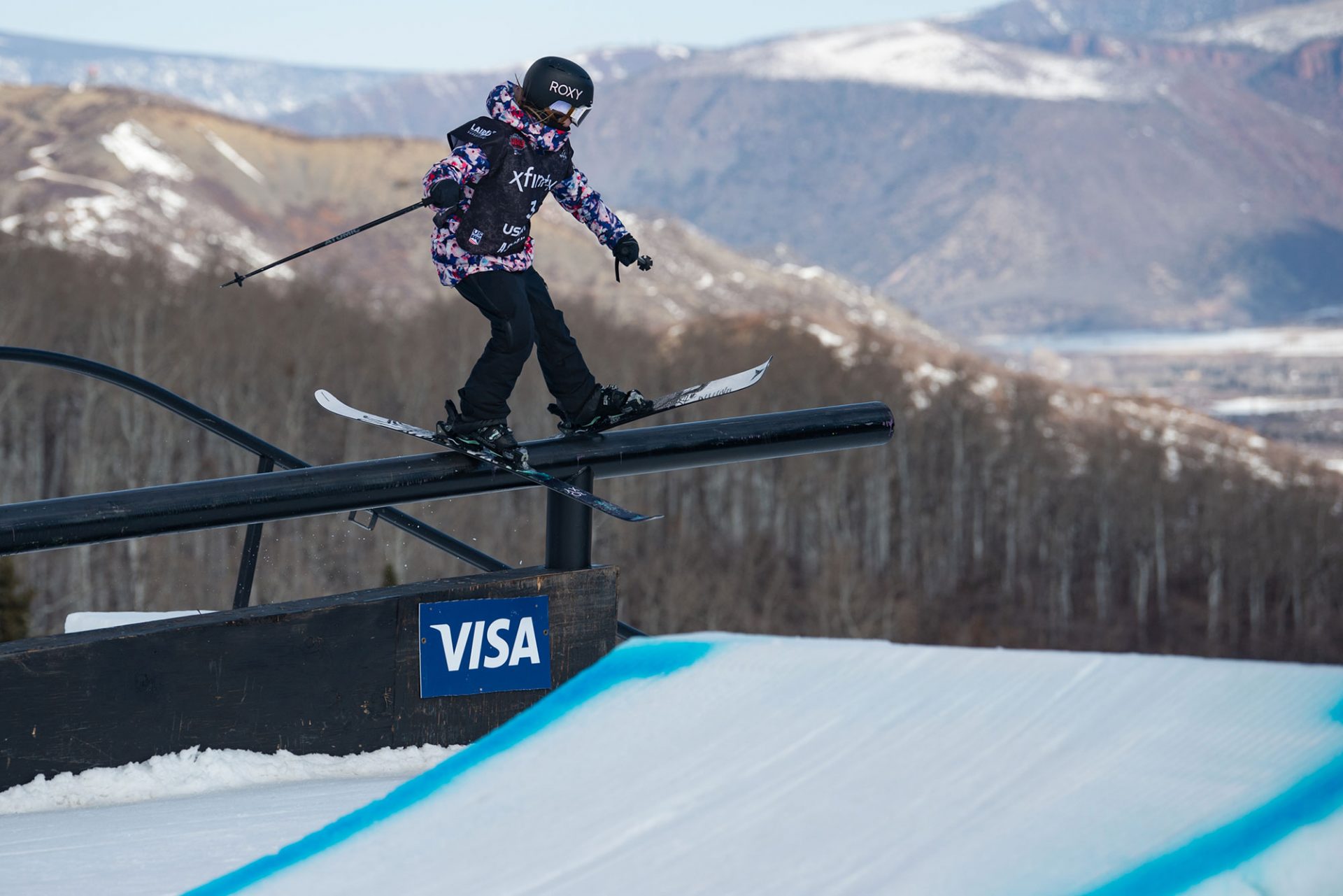 Megan Oldham locks in for a front 450 out on her way to a third-place finish. 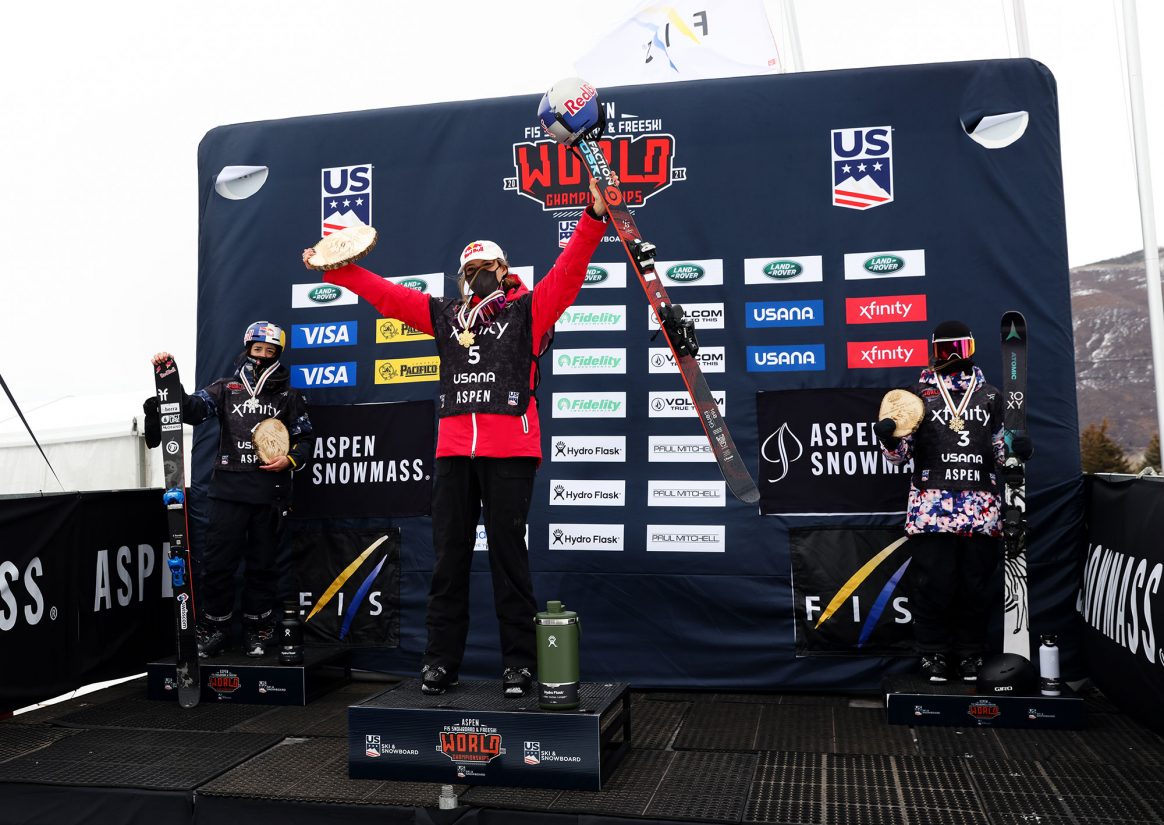 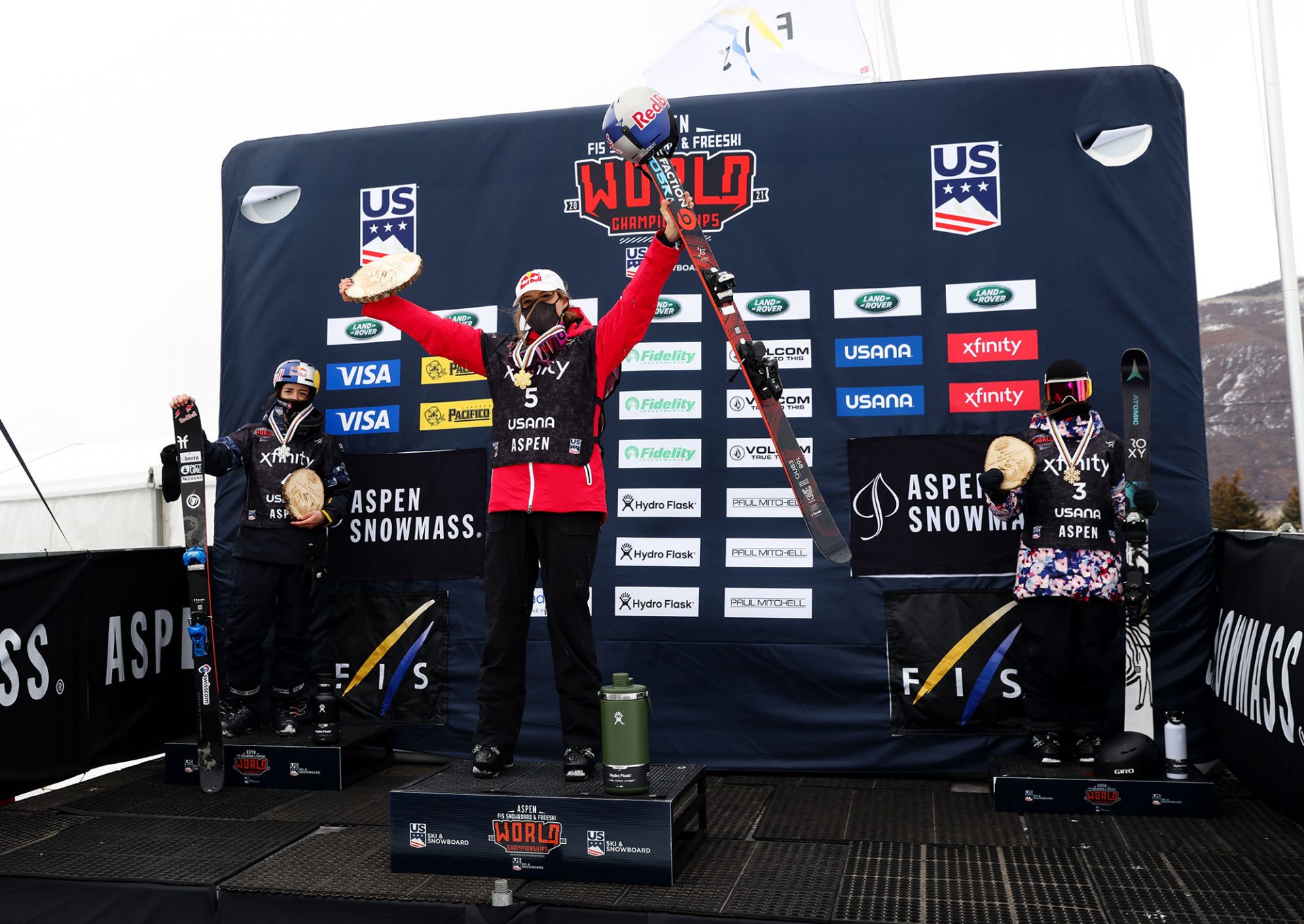 Eileen Gu celebrates her second gold medal of the week, flanked by Mathilde Gremaud in second and Megan Oldham in third.

Hungry Swiss challenger Kim Gubser kicked things off with a bang in the men’s contest, stomping an incredible one-two punch on the last two jumps—a switch triple cork 1260 safety into a massive forward triple cork 16 mute—but botching the landing of the latter. The theme of landed runs with aesthetic flaws was carried on by Jesper Tjäder, Oliwer Magnusson, Finn Bilous, Colby Stevenson and Andri Ragettli, who all made it to the bottom but with mistakes in their runs. 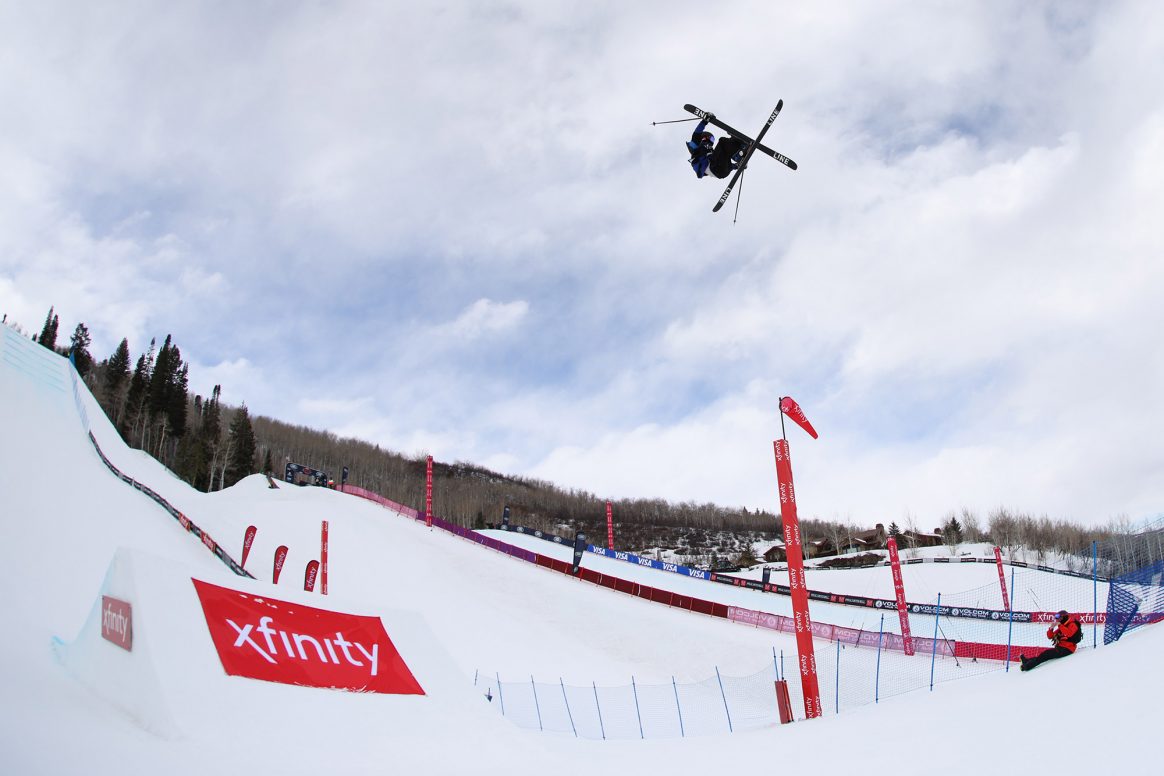 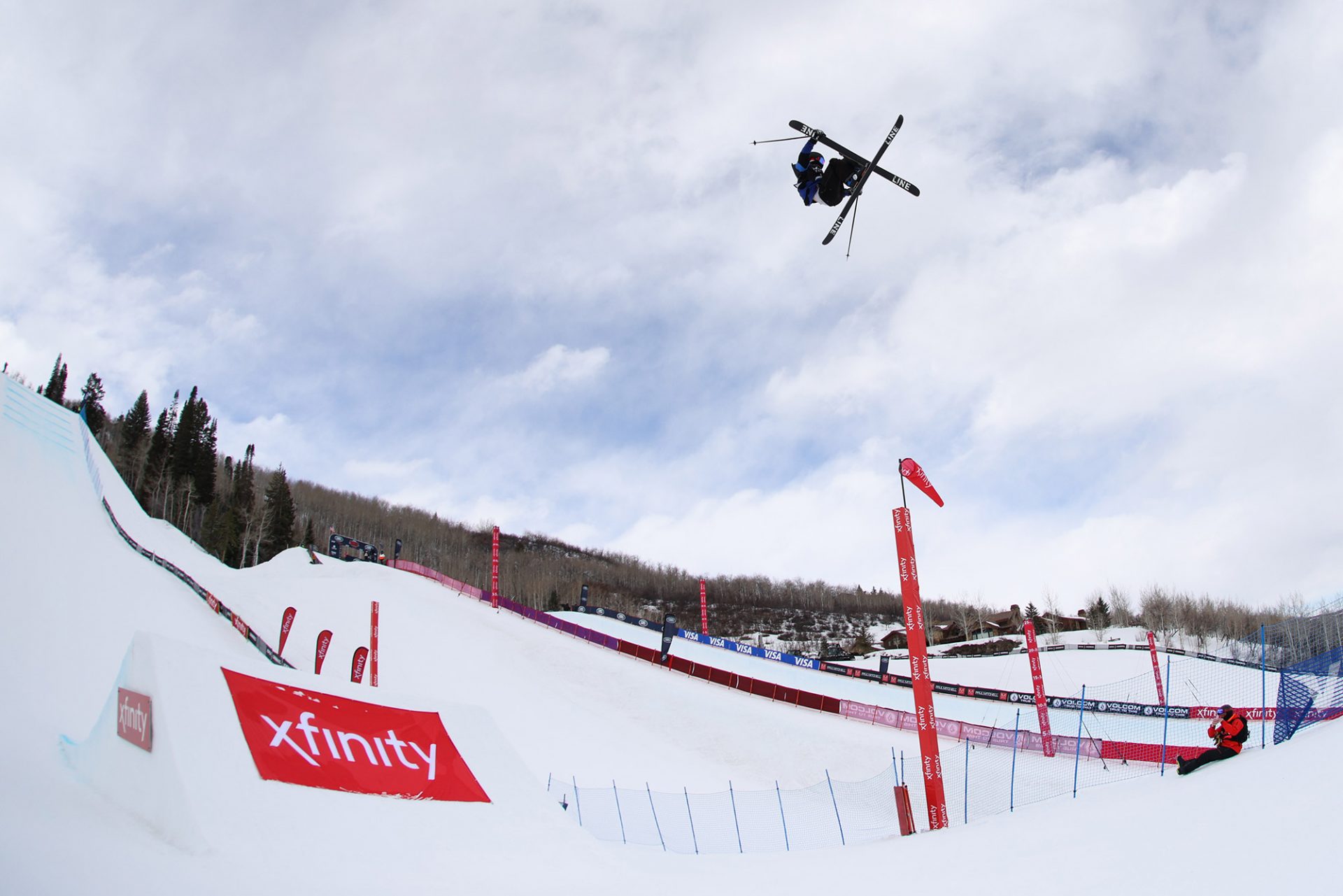 Kim Gubser's massive triple cork 16 to the bottom of the landing of the last jump put everyone on notice: this slopestyle final was going to be heavy. 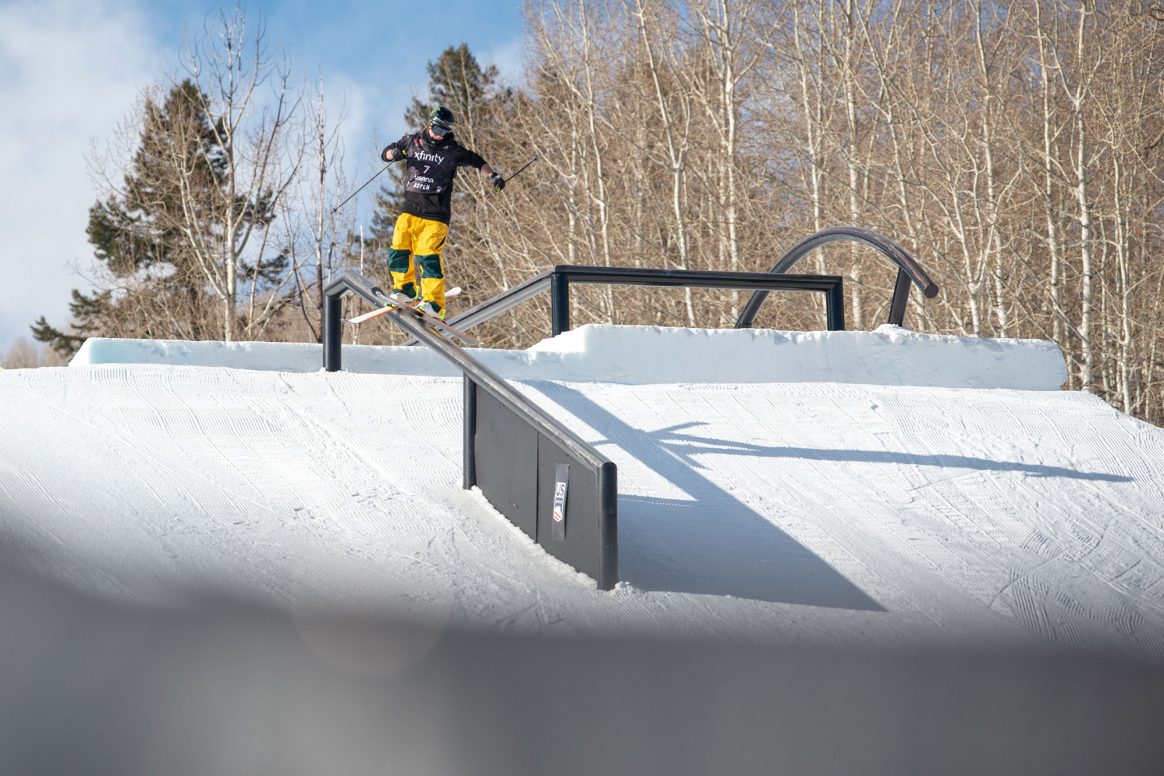 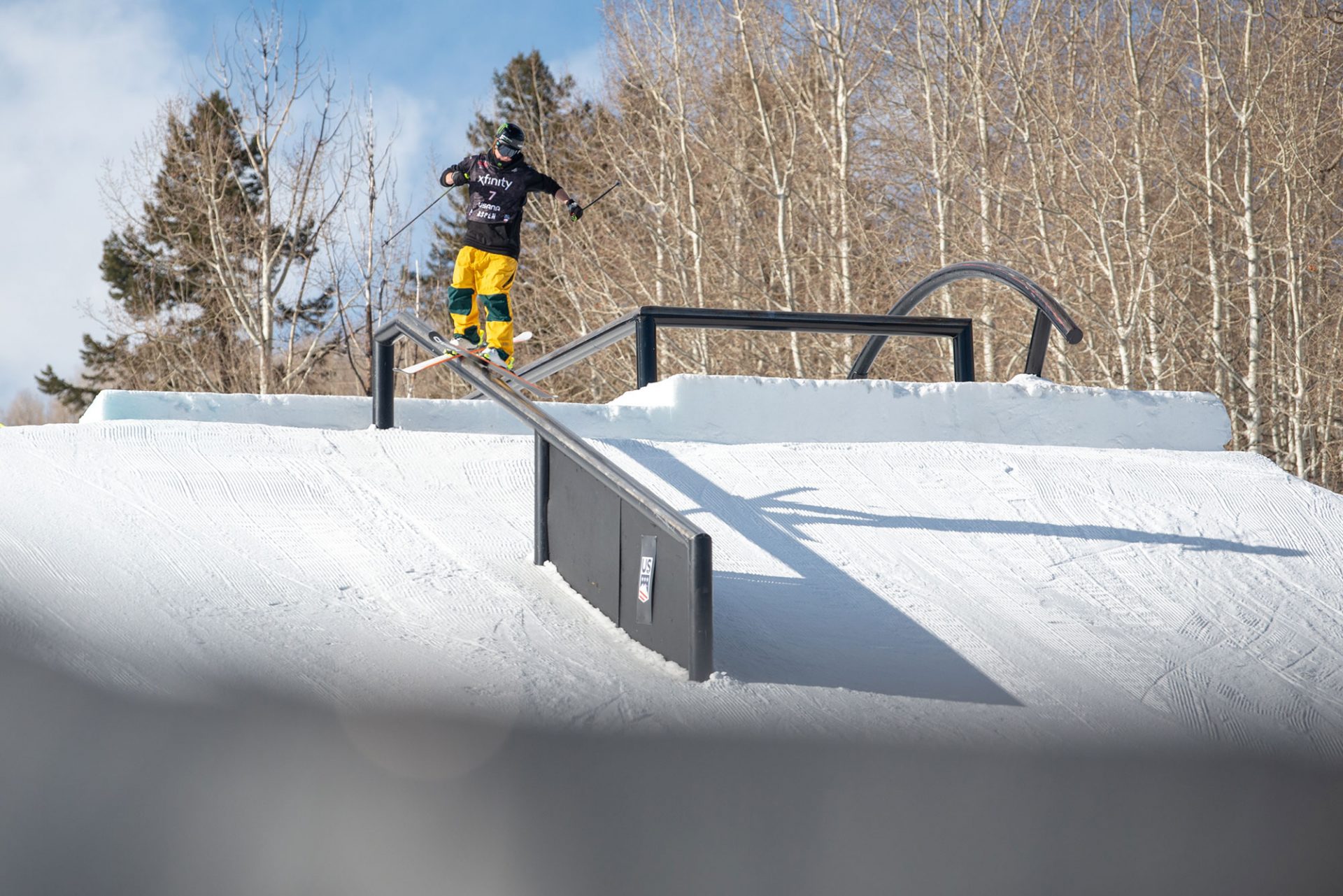 Evan McEachran may not have podiumed, but he won the gold medal for the most swaps in the rail section.

In run two, Gubser stomped his back-to-back triples clean to move into second place. Colby Stevenson unpacked a monster run full of rail wizardry (switch 2 backslide, 2 out) and huge spins (double cork 16 stale) to knock James Woods out of first, while Andri Ragettli landed a solid run of his own, scoring just below Stevenson and bumping Woodsy down into third. Meanwhile, Max Moffatt, Antoine Adelisse and Alex Hall all continued to have trouble getting through the rails cleanly— a frustrated Adelisse giving voice to the day’s loudest “PUTAIN!” 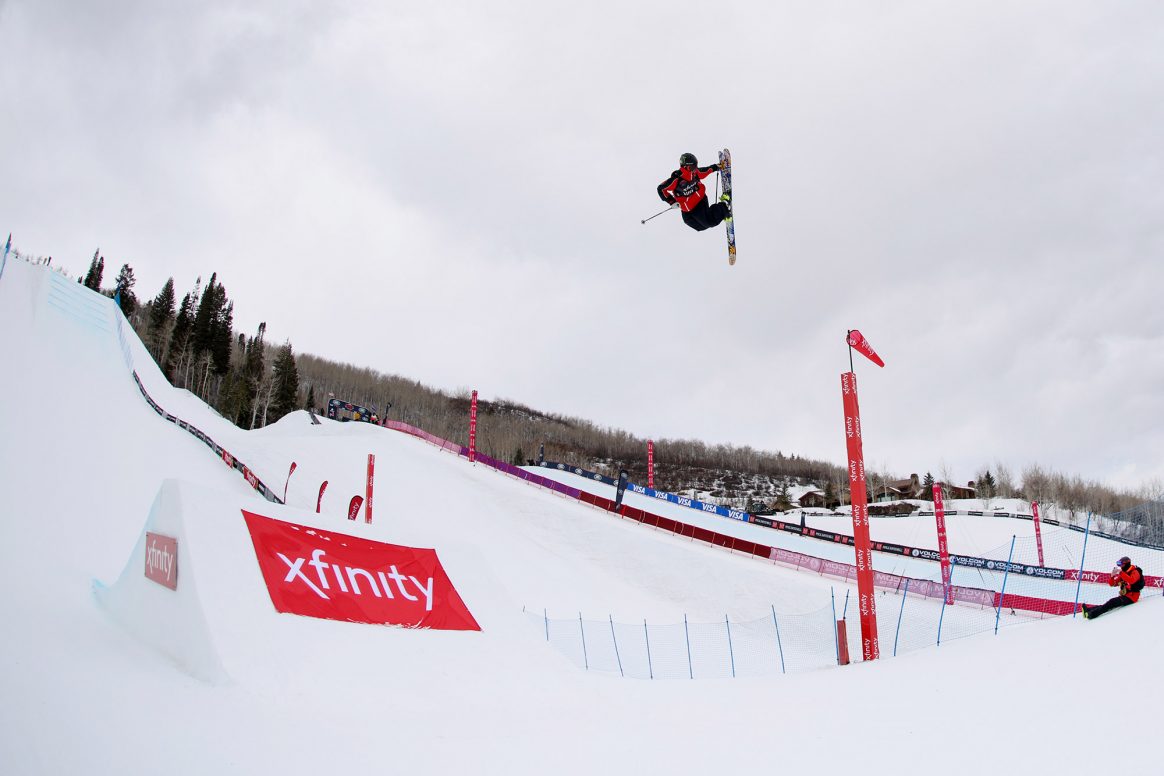 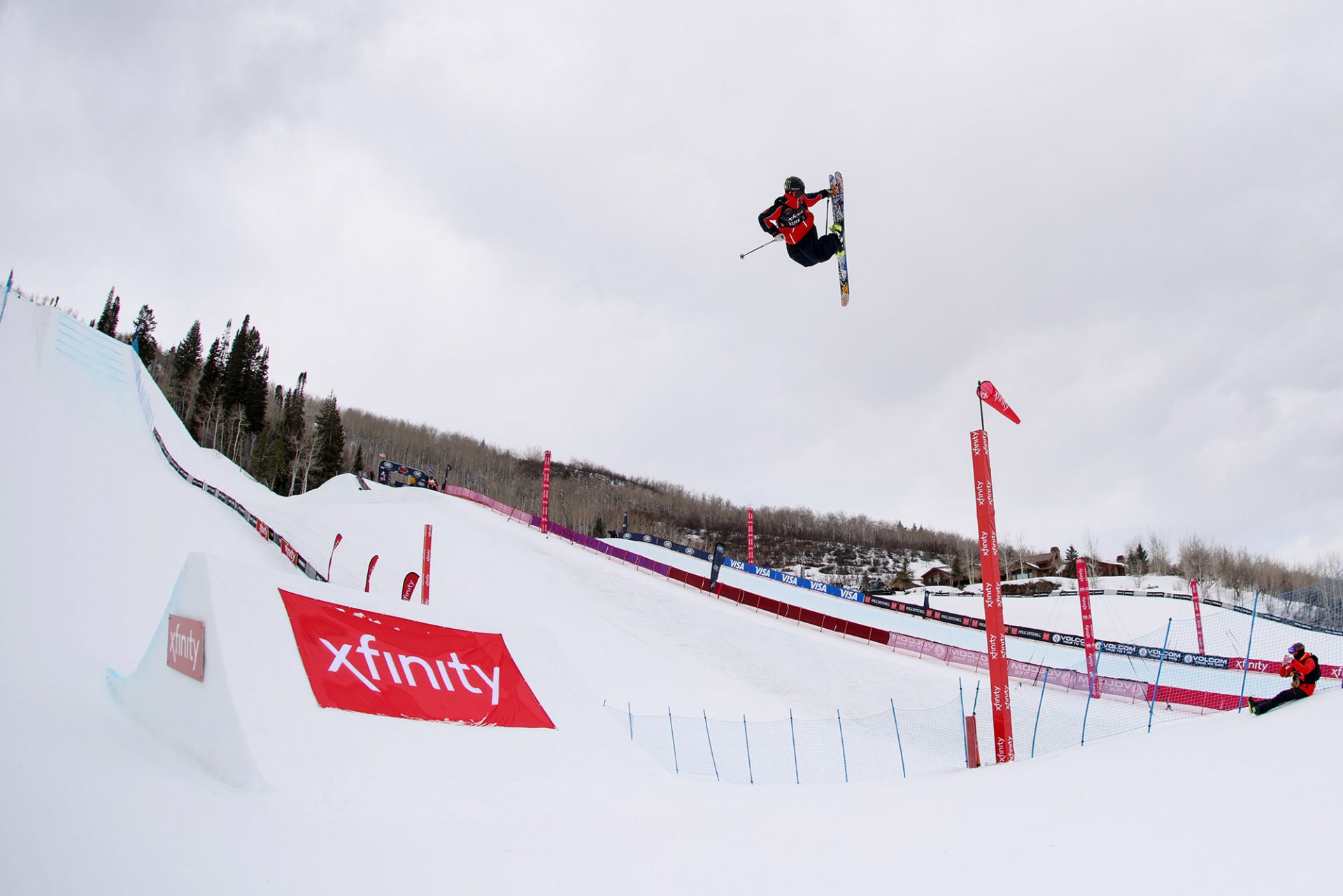 Colby Stevenson's flawless double cork 1620 stale to cap off his second run was one of the most impeccable tricks of the finals.

With one run left to go and the wind now cranking across the course, Stevenson and Ragettli led the standings, followed by McEachran and Gubser. On the second-to-last run of the day, Ragettli managed to put all the pieces together, stomping a right dub 12 reverse mute, switch left double misty 16 safety, and a left dub cork 16 double tail to bump Stevenson from the top spot. The last surprise of the day came from Alex Hall. After crashing on his first two runs, A-Hall his groove on his final attempt, lacing up a switch right double 10, switch left double 12, and a left double 16 Buick after a clean rail section to earn himself a third-place finish on the final run of the day. (Click here for the full results from FIS.) 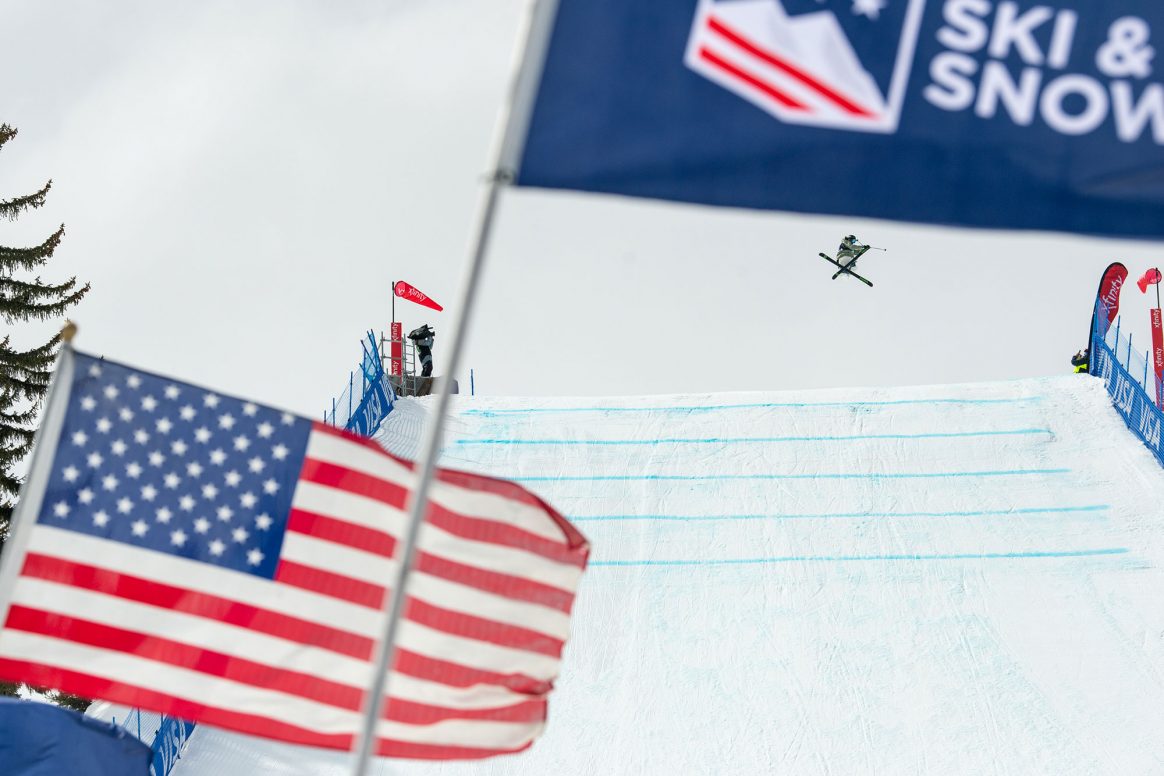 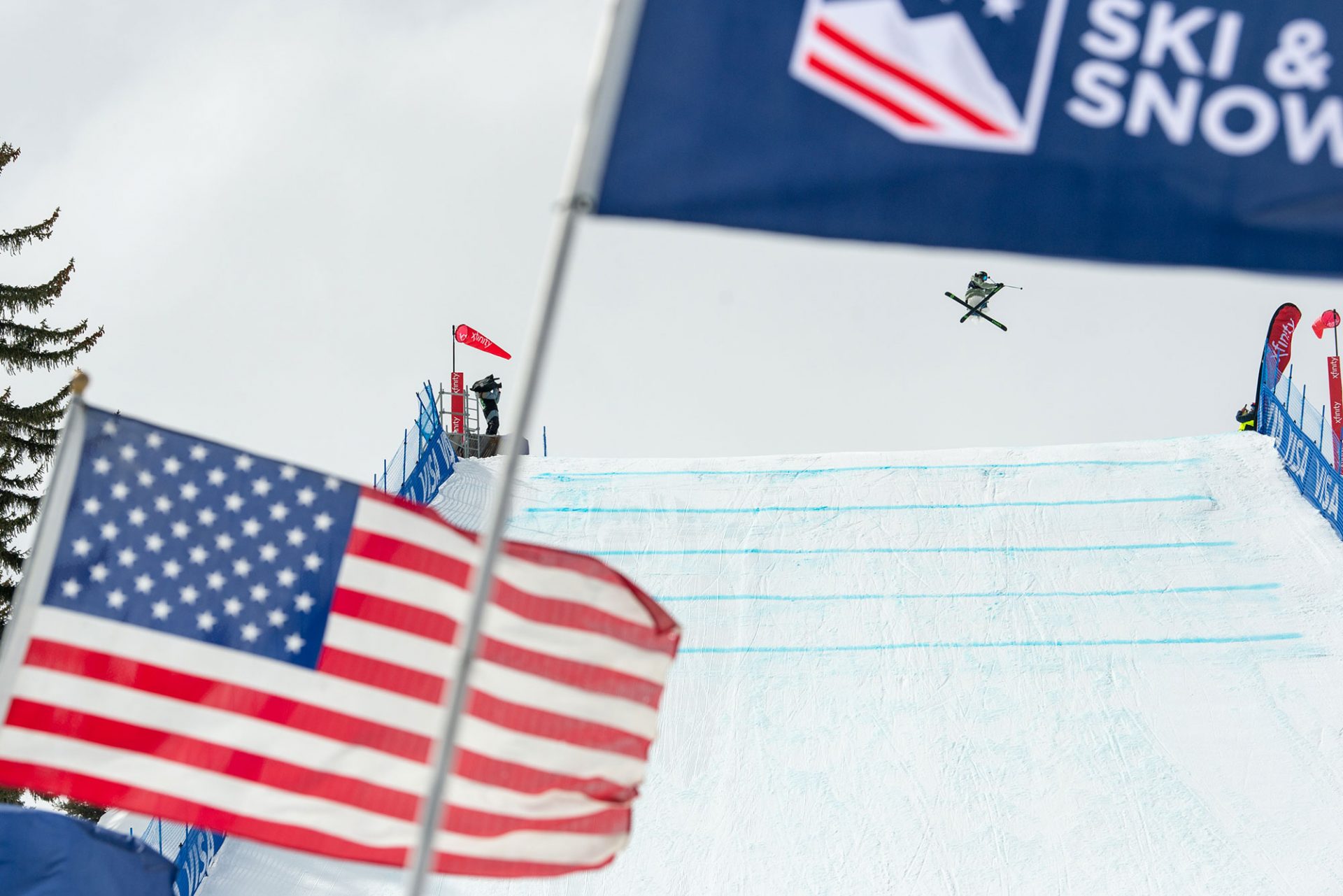 Andri Ragettli delivered with a clutch run when it mattered the most to lock in the gold medal. 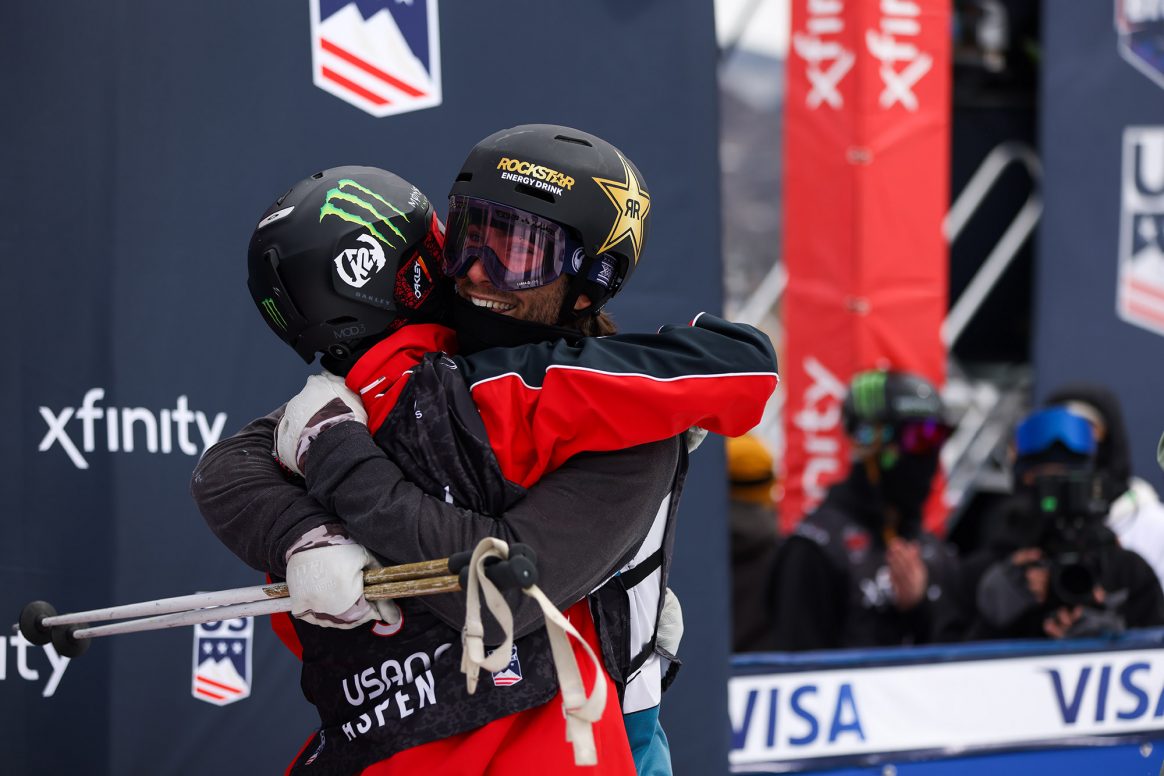 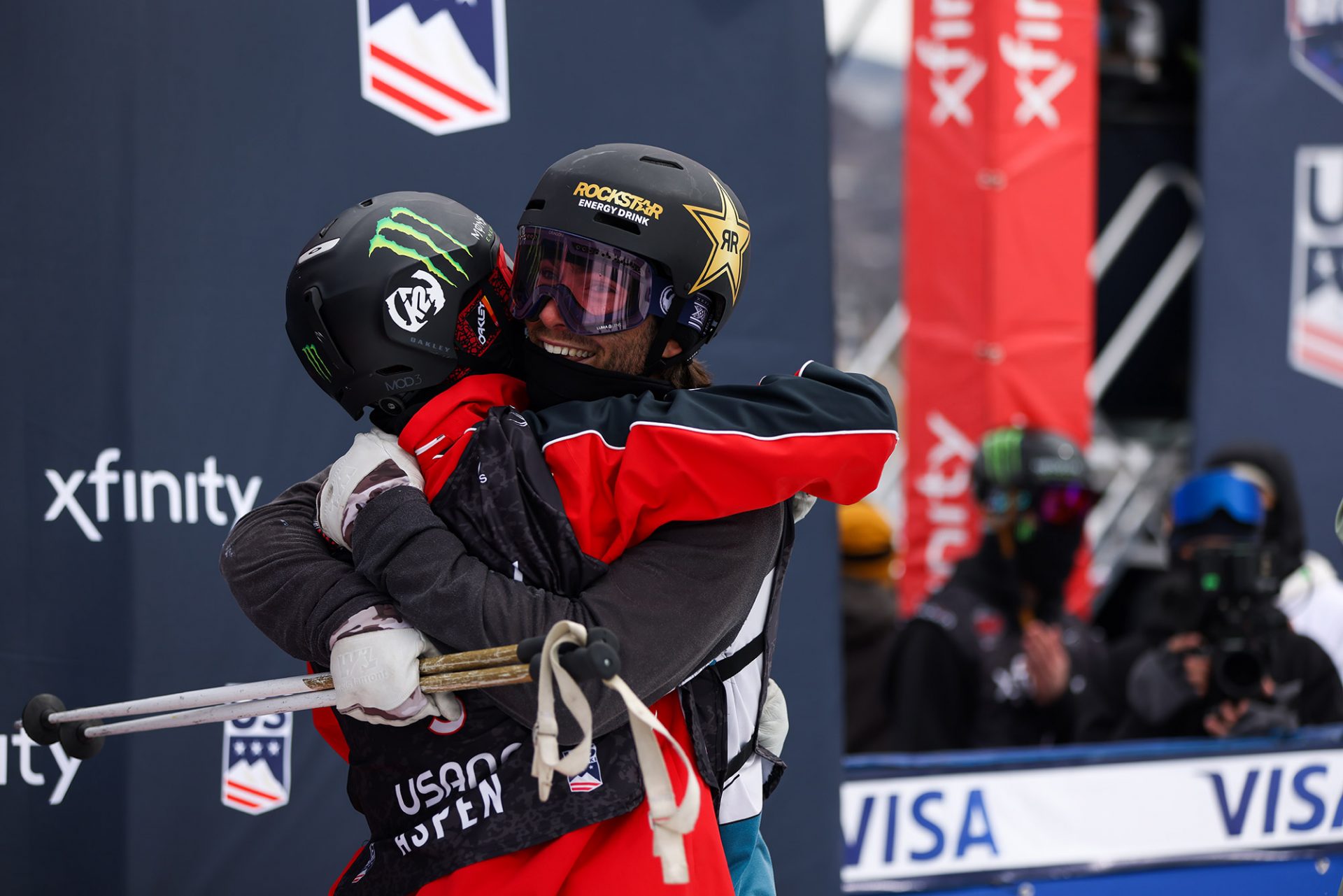 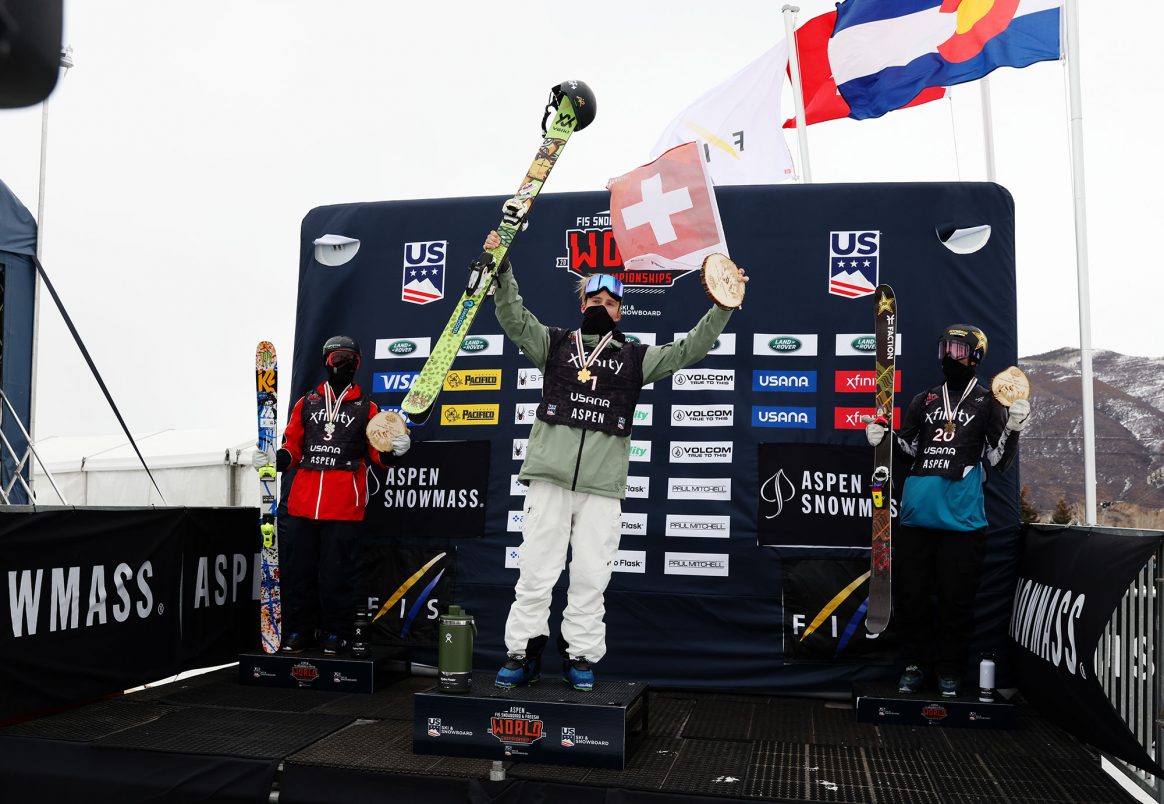 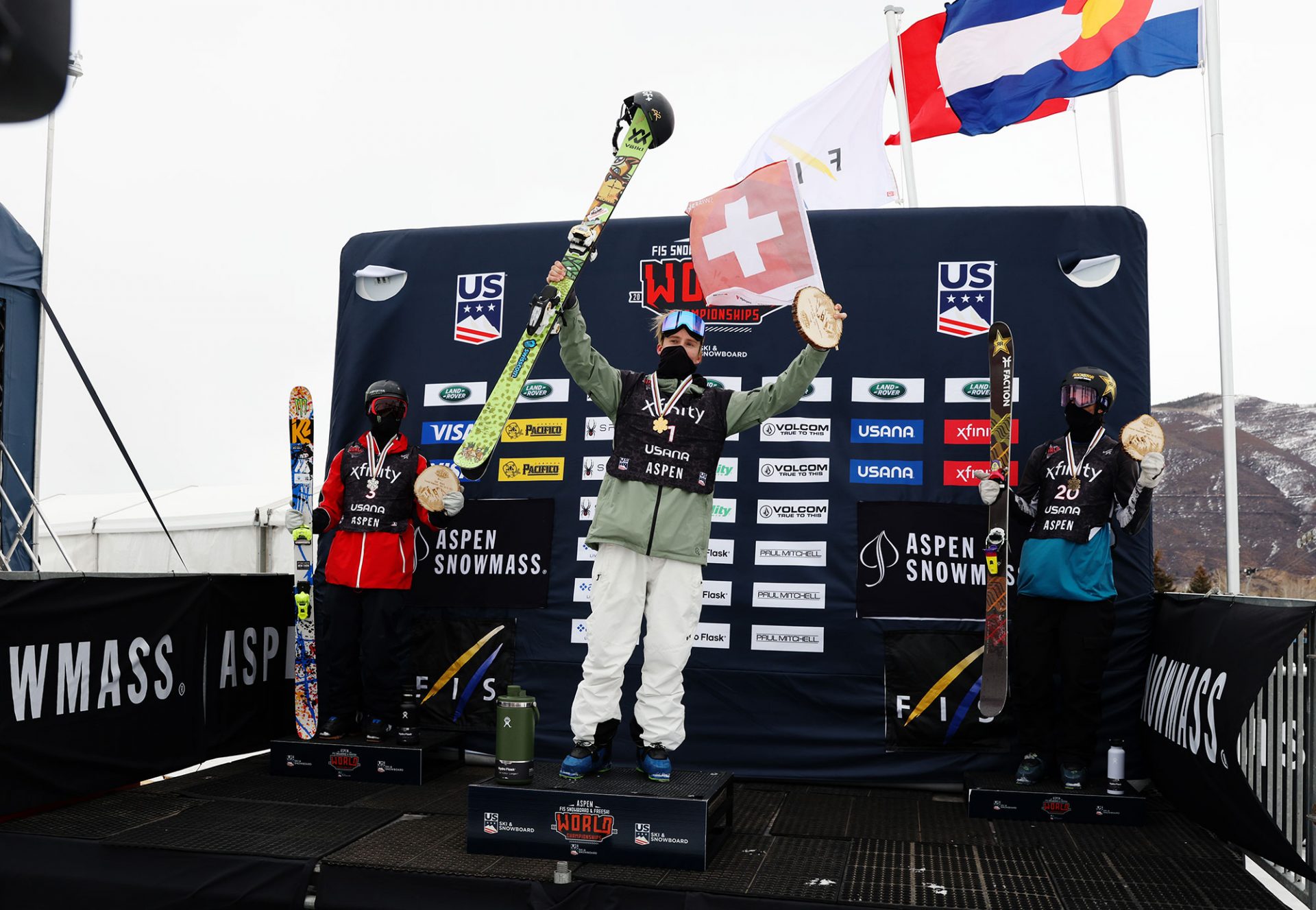 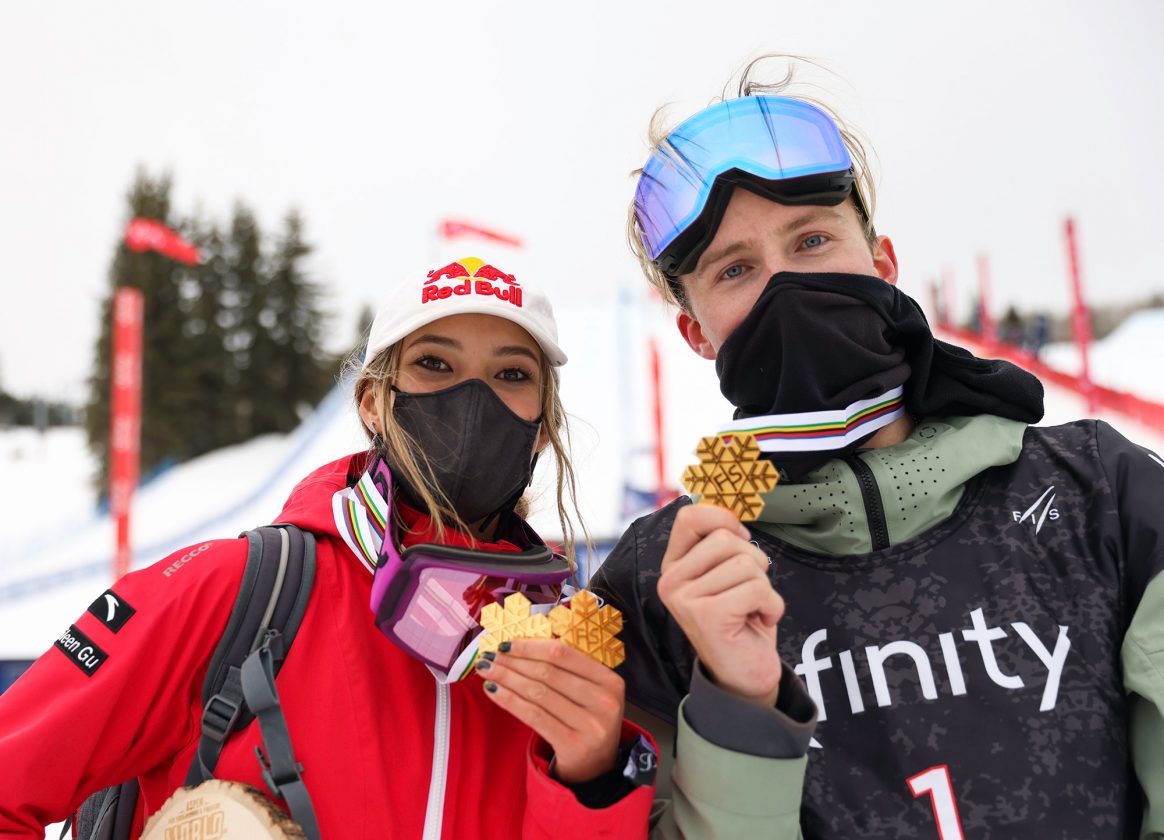 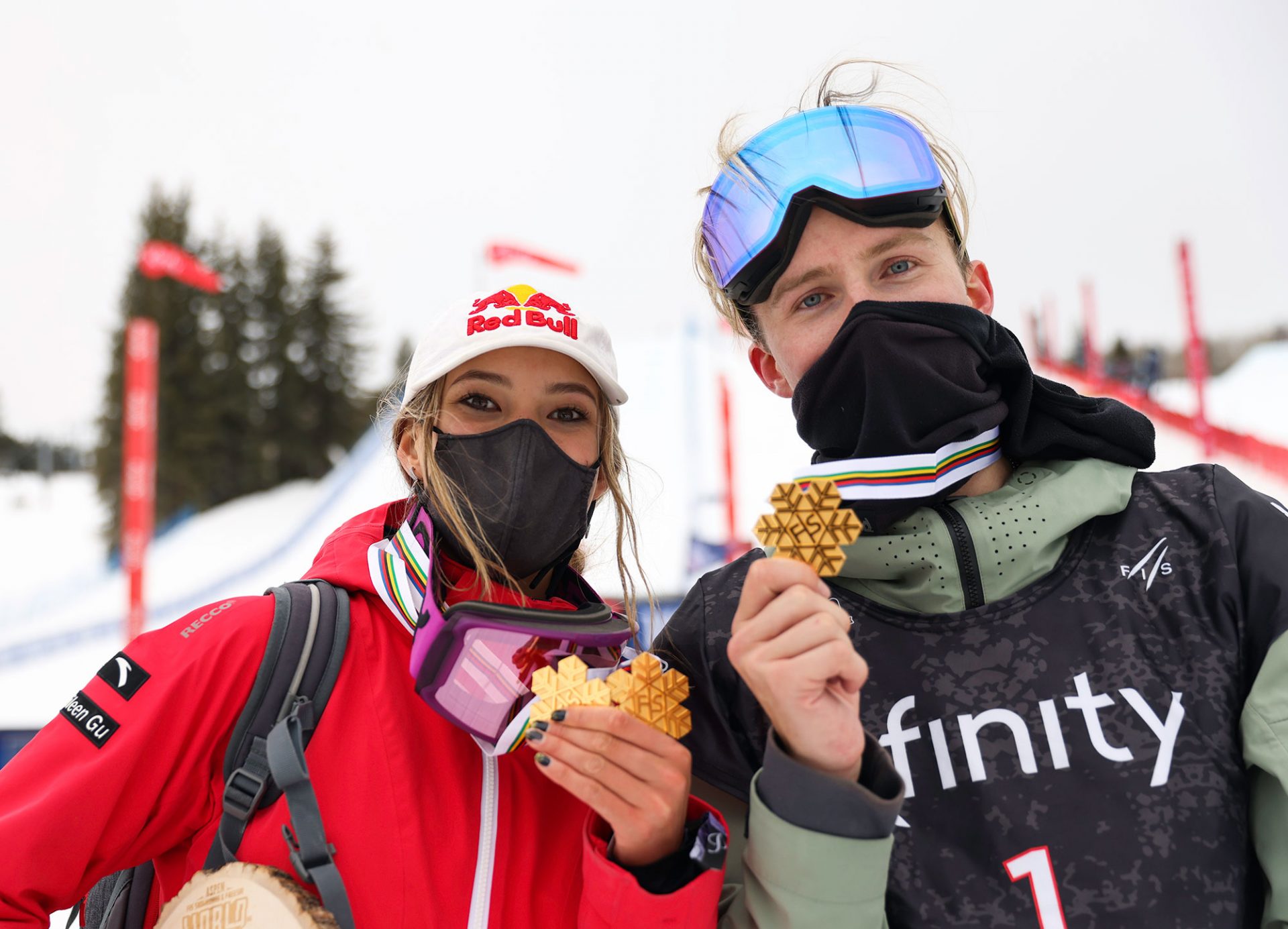 Full replay of the Slopestyle Finals. (Note: You may need to use a VPN client to watch from some locations.)