Women’s freeskiing competition at the 2022 Beijing Olympics wrapped up today with the halfpipe finals at Zhangijakou Genting Snow Park. EILEEN GU skied to a clear victory for her second gold medal, and third medal overall, at this Winter Olympic Games.

In the wind-swept Secret Garden halfpipe, Eileen’s run remained untouchable. Already with a commanding lead after her first run, she improved her score by 2 points, adding back to back alley-oop flatspin 540s to complement her back to back 900s. With her closest competition, the Canadian duo of Cassie Sharpe (the defending gold medalist from 2018) and Rachael Karker trailing well behind her after three runs, Eileen enjoyed a victory lap on her way to claim her second gold medal in the space of two weeks.

Cassie Sharpe took second place with the help of her own back to back 900s and a leftside 1080 at the bottom. The Canadian even unpacked a secret weapon, a mid-run rightside 1080, becoming the first woman to land both-way 1080s in a pipe run. Even so, she stayed well behind Gu, whose execution, amplitude and grabs were head and shoulders—sometimes literally—above the rest.

Cassie’s Team Canada teammate Rachael Karker completed the podium in third place on the strength of her first run, with matching both-way 900 japans and flairs.

With the podium practically locked down after the first run, the more interesting contest was the one for fourth place, where China’s Li Fanghui, American Hanna Faulhaber and Estonian Kelly Sildaru battled for the honor of being the first off the podium. Hanna’s contest-leading amplitude propelled her to an early lead, but she was overtaken on Run 2 by Li’s polished and stylish air to fakie and clean rightside 1080. However, Kelly soon bumped ahead of Li with cleanly grabbed rotations to both sides.

Notably, few of the finalists put down their best possible runs as strong gusts and wind-blown snow in the halfpipe bottom presented challenges. Eileen Gu didn’t need to unpack her switch cork 720 to win, and Kelly Sildaru didn’t perform matching alley-oop 540s as she usually does. 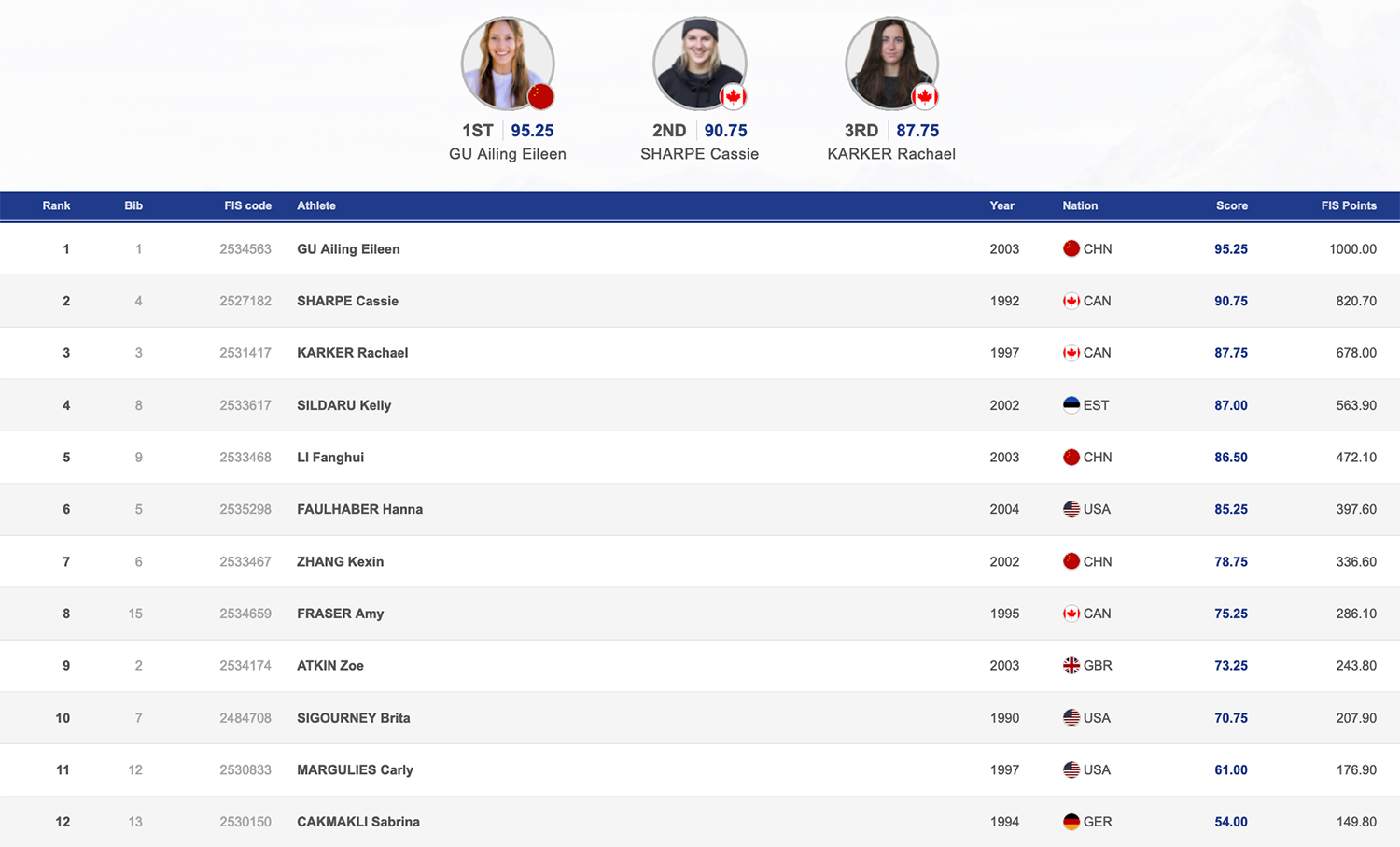 Merino Zipwear out of Norway!

Abruzzo: Off the Beaten Path in Europe’s Undiscovered Powder Stash

Merino Zipwear out of Norway!

Abruzzo: Off the Beaten Path in Europe’s Undiscovered Powder Stash