This year’s Dew Tour slopestyle was truly one to remember. Full report here.

What a day it was at Breckenridge, Colorado to close out the 2015 Winter Dew Tour in style—bluebird skies, a few inches of fresh snow, and a top-notch slopestyle course waiting for women’s and men’s ski finals. 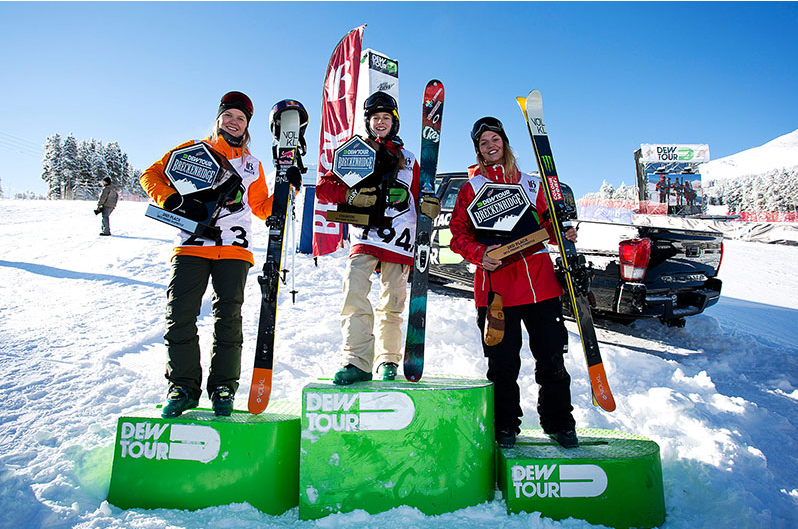 The women took to the course first, their final having been postponed due to yesterday’s snowstorm, and the first big surprise of the day came when 13-year-old Kelly Sildaru—long hailed as “the future of women’s freeskiing”—made good on the hype in her first Dew Tour appearance, promptly winning the slopestyle with a run including 720s and switch 900s in both directions and top-tier rail tricks. Veteran competitors Tiril Sjåstad Christiansen and Emma Dahlström, in second and third respectively, had to give up the top rung to their young colleague today, and are surely wondering (along with the rest of the women’s field) how this young phenom can possibly be beaten in the future.

Then it was time for the men. The level of this competition was very, very high—with perfect conditions, nobody had any excuses today for not putting down their very best run. That was immediately evident when the first two skiers out of the drop-in, last-chance qualifiers Fabian Bösch and Øystein Bråten, both posted scores in the high 80s.

From there on out it was pretty much a slugfest, with few falls and each run looking more stomped than the rest. With the notable exception of Alex Beaulieu-Marchand, whose rightside double cork 12 gave him some trouble today, every skier put down at least one clean run.

Following Gus, McRae Williams, Jossi Wells and James Woods all put down big runs that on any other day might have taken the lead—but after the dust cleared from Run 1, it was apparent that it would take something truly extraordinary to knock Gus off the top spot.

That “something” didn’t come in Run 2 despite other skiers’ best efforts. Antoine Adelisse brought out the triple cork 1080, but couldn’t put it down clean, and the rest of the field looked to clean up their runs even more, opting for the most part to stick with their planned runs and lay on the finishing polish.

Jossi Wells was able to do that best, with a beauty of a run that included impeccable rail composure including probably the best afterbang of the day, and a switch double cork 1440 at the bottom that helped him scoot into second place, bumping Fabian Bösch into third.

But at the end of the day, no one could touch Gus, who’s now won back-to-back Dew Tour slopestyles, and that just nine months after a knee injury.

“Today everybody put down runs. The level of riding was just insane,” said Gus. “I feel really proud to walk out on top.”

All in all it was a fine slopestyle display featuring plenty of highly refined tricks, if somewhat lacking in the creativity department. With ABM unable to back up his highly unique rail line on his jumps and Henrik Harlaut failing to make the finals, there weren’t a whole lot of unexpected, unusual, or unconventional tricks thrown on the slopestyle course today. But the tricks that were thrown, with very few exceptions, were all very polished—and that’s never a bad thing.

The Power of One

The Power of One