The Bunch’s latest project, Many Fantasies Later, is a beautiful piece of cinematography, and of course, you don’t win Best Ski Film at the High Five Festival without some great skiing. However, Many Fantasies Later seems divisive in the ski community: Most people love it, but some people think a ski movie should be more focused on skiing than on art. That’s why I had a long conversation with Alex Hackel and Magnus Granér about their thinking behind the masterpiece.

Matt Masson: Hi guys, Many Fantasies Later is a backcountry movie. that’s quite a departure for The Bunch, but it’s been critically acclaimed. What was the thinking behind making this film?

Alex Hackel: My takeaway is that we created something completely unique, but it was created out of our shortcomings. It was created out of our lack of ability as “mountain people.” We also took Björn Eklund with us, who’s an absolutely amazing filmer and who made the film exactly what it is, but he’s not someone who’s been in the mountains before. We’re jibbers, trying to make our first statement in the backcountry. We basically had limitations at every corner, which forced us to come up with something new. If we’d tried to do what everybody else is doing, we would make a bad movie. That’s also why I highly advise that people switch up their lanes of skiing. If we were dudes that grew up in the Alps or British Columbia and were dedicated to backcountry skiing our entire lives, we would be trained to look at a mountain in a certain way, work with certain people, dress in a certain way and be inspired by certain people. Us taking our non-big mountain backgrounds and then becoming inspired by the mountains, also allowed us to bring a different flavor to it. If a big mountain skier came to the streets or park or whatever, it would be unique. There’s so much to be said for cross-pollination between skiing styles. This movie is a great example of that, and to not be afraid to try and do something different.

We created something completely unique, but it was created out of our shortcomings.

Magnus GranÉr:  A few of us felt like we could have performed better skiing-wise, but one of the reasons why this movie is so good is that we were dedicated to filming these artistic concepts, so we’d just go and film lines. The intro for example. Only a small number of these segments that we filmed as “concepts” actually made the movie. We did actually spend a lot of time not filming our best skiing, but filming these “film concepts.” Some of them turned out phenomenal, some didn’t. This led to the movie that we have. We sacrificed our skiing and put the filming first. That’s also a reason why we don’t feel like we got to show off our skiing in the best way possible. It’s always worth the sacrifice to make the film better.

AH: There’s a reason why the film has won so many awards, and we have not been nominated for a single rider award. It’s very uncommon that the film of the year doesn’t have the part or rider of the year in it. To me, that’s confirmation of our sacrifices paying off. The film is getting credit, not the riders. A lot of people in the comments have highlighted how this opens a new door. This movie valued cinematography and the portrayal of mountains just as much as it valued the skiing.

MG: My favorite comment on YouTube was something like: “This is a whole new genre, where the skiing is blending with the nature.” Coming back to our limitations, Björn had a whole new approach than we did. In one way that limited us, but in another way that’s what also made this film so emotional and created the beauty of it. He was feeling a lot of feelings out there in the mountain. We were all doing that and slightly going insane.

AH: Björn Eklund is a genius and made the film into something extremely beautiful.

MG: He cares about this to the fullest extent, which we all do. That’s what makes it good. You wake up in the morning and you know that everyone else is going to be just as dedicated to getting those clips as you are. It’s all you want to do. 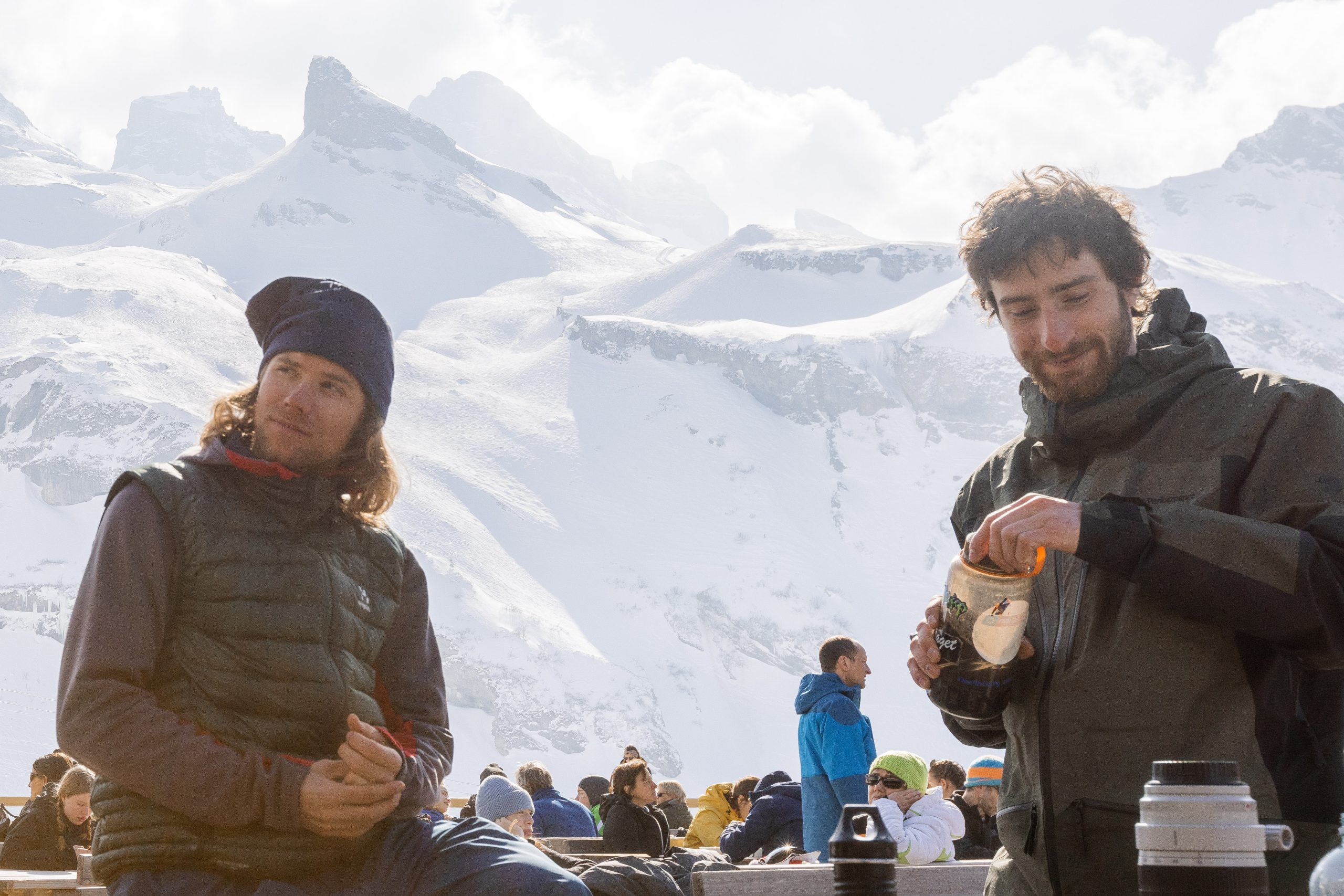 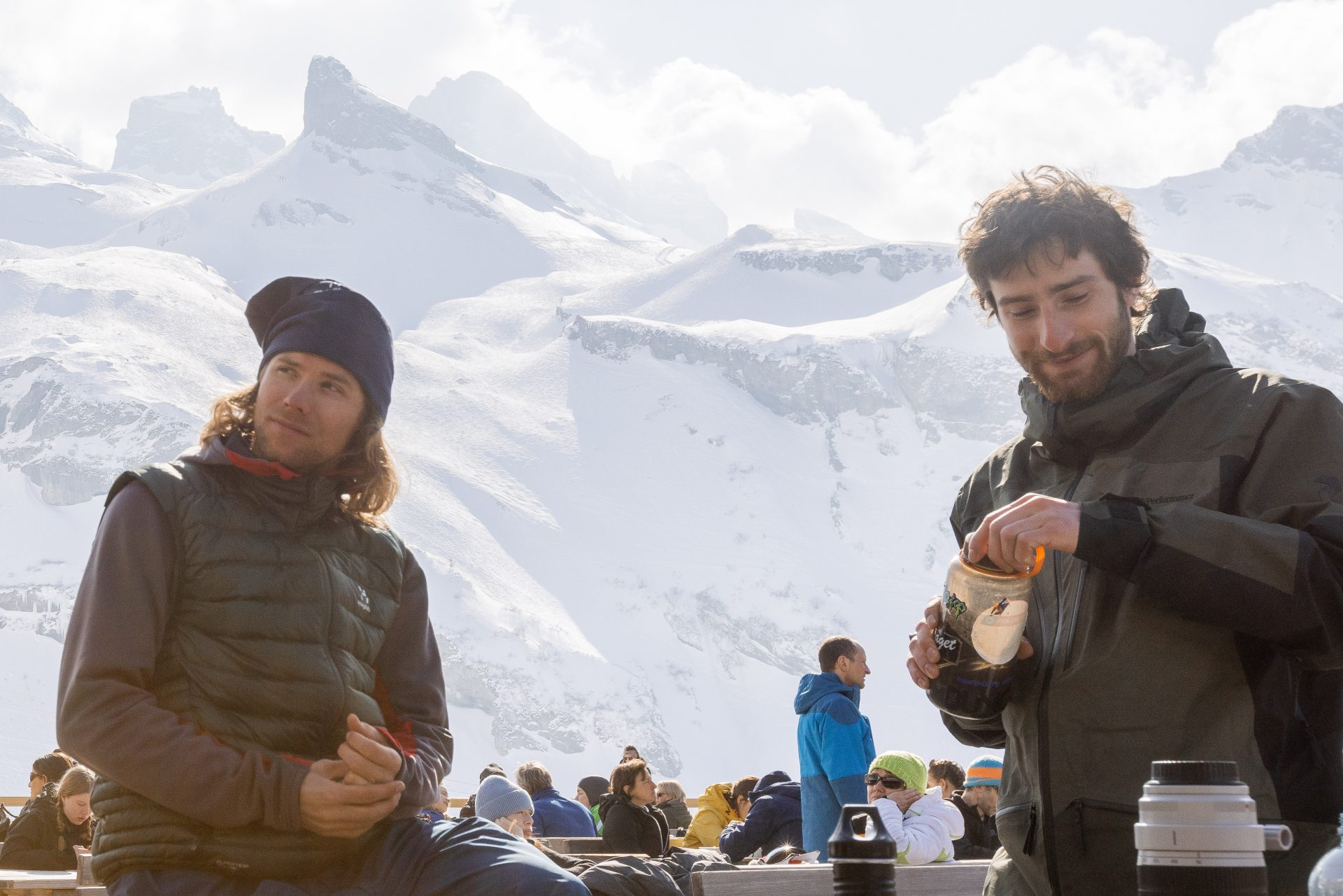 Magnus and Alex taking a breather from filming.

You wake up in the morning and you know that everyone else is going to be just as dedicated to getting those clips as you are. It’s all you want to do.

MM: Is this the future for The Bunch? Both in the style of skiing and of movies?

MG: I think we’re going to continue riding a lot of backcountry, but I definitely want to do everything. It feels cool coming from a jib background into backcountry and all-mountain skiing and having the perspective of being able to do everything. If it’s snowing outside you can go hit a street rail, film the best clips and have the best time ever. You can adapt to any weather; any condition and you can always get shots.

AH: I think that The Bunch films are always the zeitgeist for the temperature of the room of the minds of The Bunch. People are often confused about what we do next. Last year we came out with an extremely core street project, Love You Too, which was a complete ode to street skiing. The next film was our first backcountry one. Many people would think that’s a 180, especially considering the skiers are pretty much the same in them. That’s because we just follow the things that get us stoked. So right now, we’re leaning towards backcountry, but that could change. It’s really hard to say. This time it was me and Magnus who spearheaded the project. In a few years, it could be two different guys heading a project, and their feeling could be different. I think we’d all love The Bunch to take the stature that we’ve built up to support other crews, create opportunities and have The Bunch do more than we’ve been doing and expand. The Bunch is definitely not a backcountry film crew moving forward. We’re going to continue to evolve and hopefully get bigger and give opportunities to more skiers.

MM: So, you might take a backseat and The Bunch will support other ski projects?

AH: The idea is for The Bunch to just keep growing and be fluid, especially in the ski movie department. The Bunch is now a commercial film company as well. That’s one side of it, but in terms of what we do in skiing, for sure the idea is that we are able to support as many skiers as possible and use our platform to help creatives of all types. Within our last four projects, we’ve had four completely different filmmakers and that’s not something that the other ski crews do. They have their formulas, and they have their guys and that’s that. For us, I think it’s important to give opportunities to people that have ideas.

MG: We want to keep building and feeding this hub of super-creatives that we have formed around us. I don’t want to say that The Bunch will be supporting all these young skiers, this year we’re helping Sweat and making that a Bunch project. We’ll just keep breathing on this creative hub wherever that wants to take itself. There’s no real plan, other than we’re now a production company.

MG: After last year we came out of the movie and I was thinking ‘I’m not doing another project’ then a new idea for a new project, with first person view drone project, started building…

MM: So, you will keep making movies?

AH: There are three certainties in life; death, taxes and a Bunch movie! Do not print that! 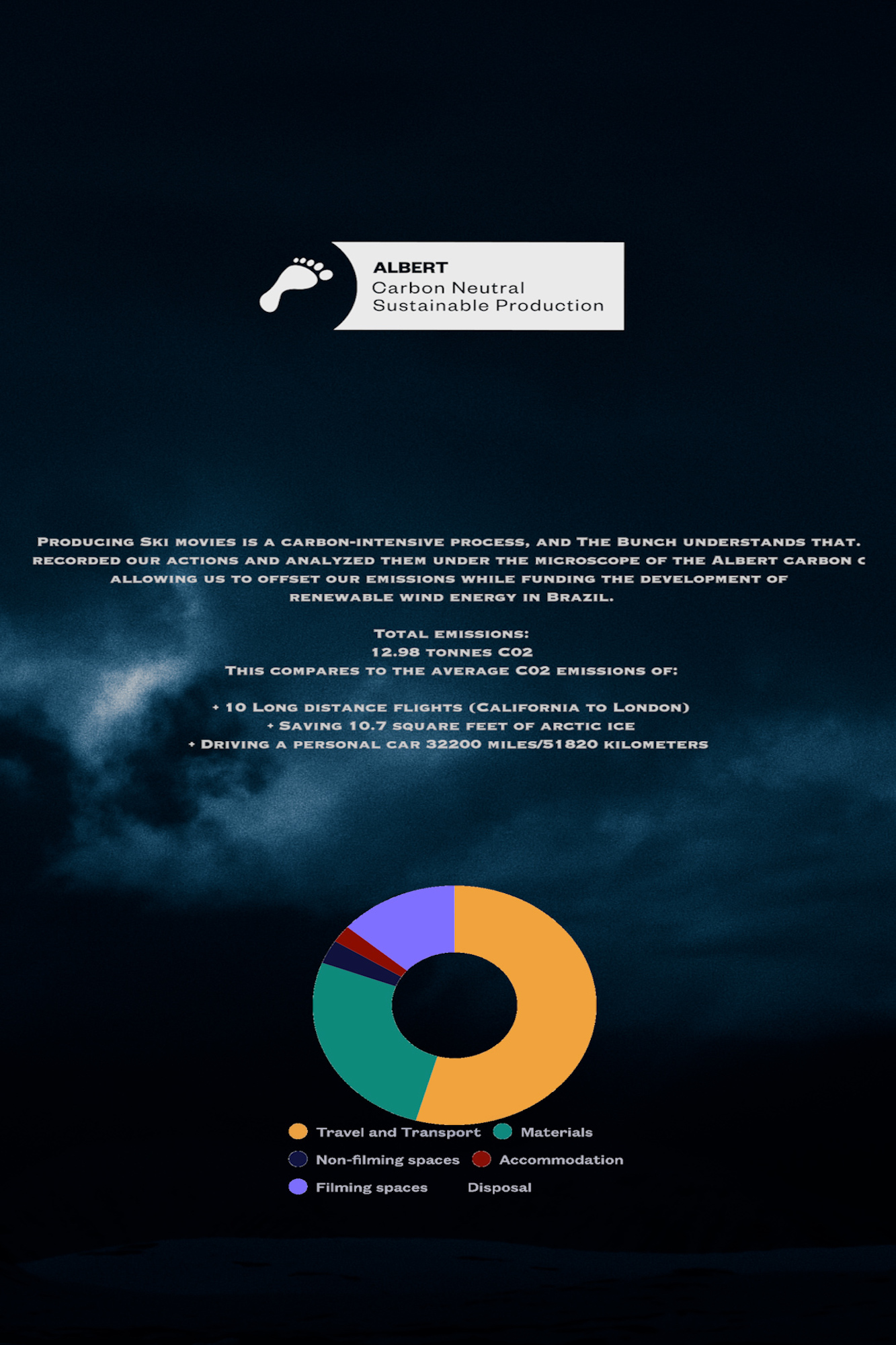 MM: You guys really stepped up your environmental awareness when you compensated your carbon emissions with IS THERE TIME FOR MATCHING SOCKS. There’s a screen at the end of this movie stating your emissions. Is that something that The Bunch will always do?

AH: It’s almost mandatory in all our movies now. All Bunch movies will compensate for our emissions. I think all products should do that now. Especially if you’re claiming sustainability, you need to show the numbers. It’s the equivalent of ten flights from San Francisco to London.

MG: The first time we measured our emissions we had 40+ tons of Co2 emissions and this movie only had 12 tons. We always tried to limit our emissions, but I guess we did a better job this time.

AH: Throughout our projects, we always had sustainability in mind, and we executed it much better this time. ITTFMS we had the same intentions, but we just did a better job with MFL.

All Bunch movies will compensate for our emissions. I think all products should do that now.

MG: We now do our calculations through a platform wearealbert.org. It’s a system where you calculate your emissions. For example we’re spending 15 days wherever, plus however many lift hours, and it knows the area and what source of electricity they use. This system is specially made for movies, TV shows and film production. It makes it much easier. We got the certification and that proves that the whole team has been aware of our sustainability focus throughout. We proved that we’ve been trying to keep the emissions down and promoting sustainability. We’d just like to give them a shoutout. If you’re serious about cutting your emissions, Albert is a fantastic organisation and you can prove your efforts with their certification. Since ITTFMS, I have noticed more productions calculating their emissions. I can’t say Sammy Carlson was directly inspired by us, but this is the third time we’ve done this. I know Sammy’s film compensated for snowmobiles, but we compensated for every single thing; food, energy used in offices, etc.

AH: I’m pretty sure that FACTION also uses Albert, maybe even before us. I may be incorrect, but it seems like before ITTFMS nobody talked about emissions and now it’s starting to pick up. I hope we’ve succeeded in raising awareness, at minimum, and maybe even a new standard. Magnus and Levi make it really easy. If you have people who know what they’re doing, you just tell them what you consumed and what you used. I don’t think it has to be harder. You just have to dedicate time. But I never thought we didn’t do something because we’re limiting emissions. We didn’t have fewer opportunities because we’re trying to limit our carbon. I was only limited by my skiing ability, but no amount of emissions affects that! 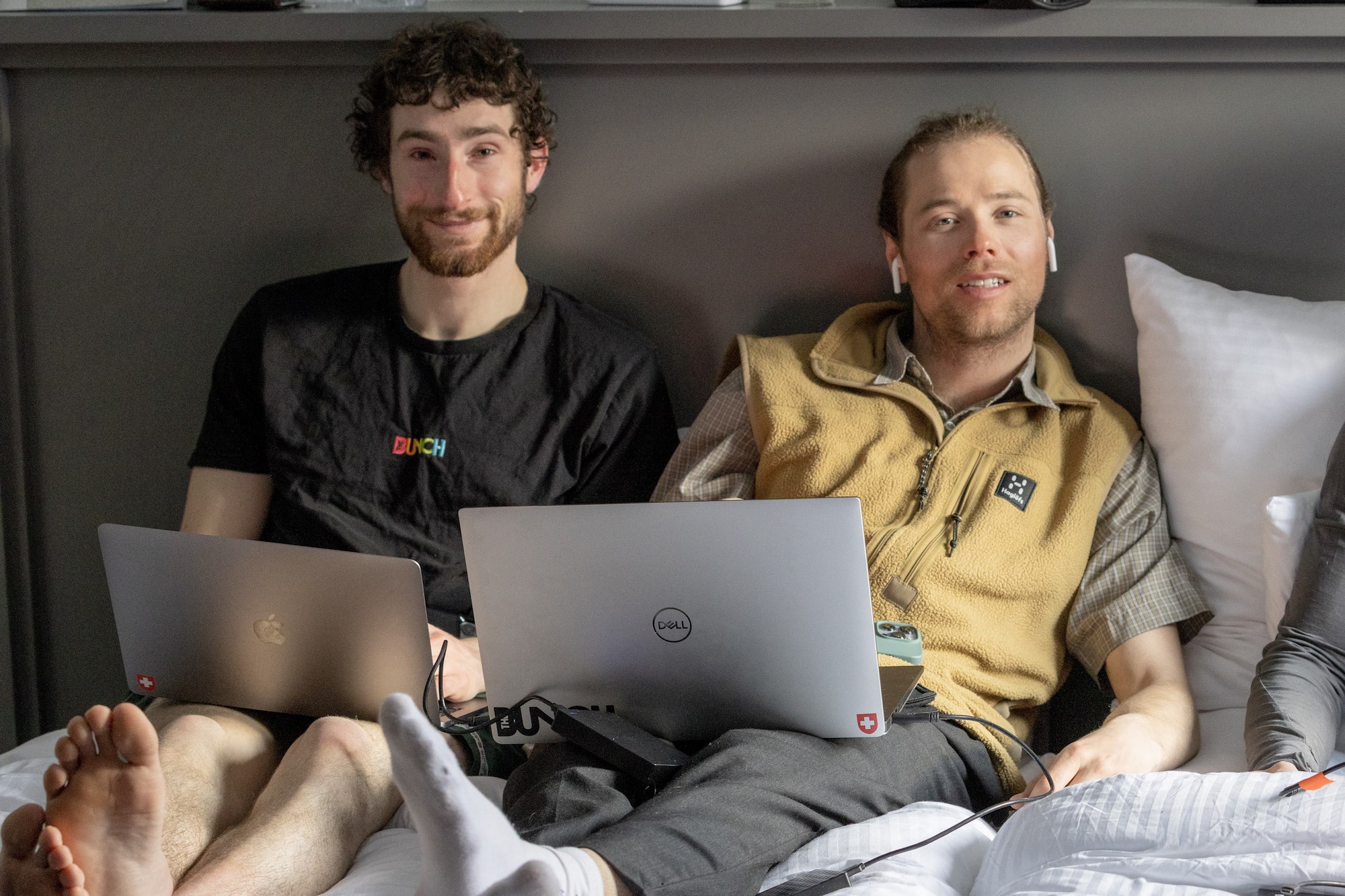 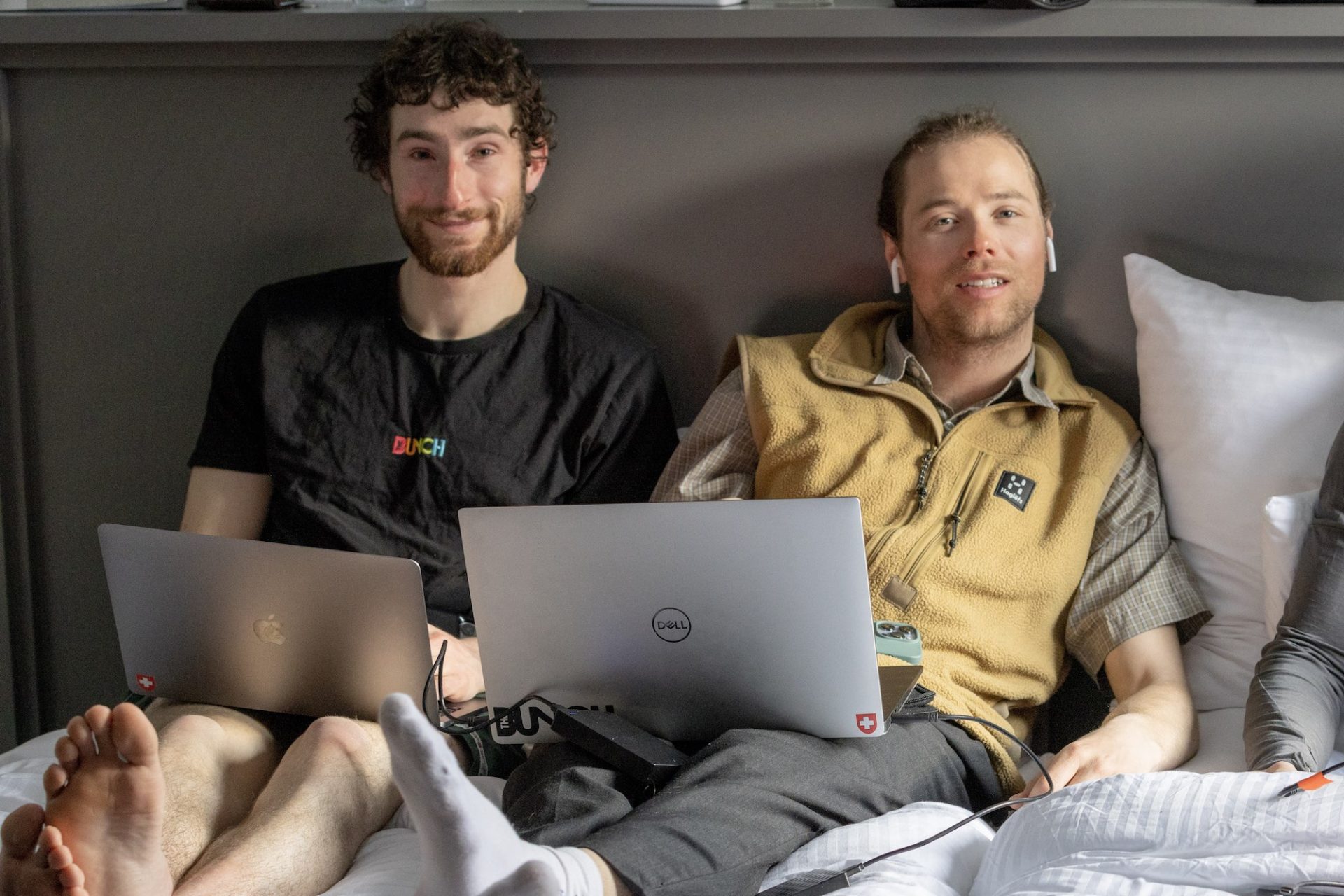 The boys probably won't have too long to put their feet up before the next project!

One minute of Jake Mageau at Kimbo Sessions

One minute of Jake Mageau at Kimbo Sessions