After the performances we saw during the Team Challenge on Thursday, anticipation was high for the Dew Tour Ski Slopestyle on Saturday, December 15. The unorthodox format, with jump and jibs split into two separate sections, gave riders the chance to shine with their best of three runs on both sections, a combined score determining the winner.

The Dew Tour has often had problems with bad conditions—December in Colorado at 3,000 meters of elevation being a fickle time of year weather-wise. This year, Breckenridge delivered brilliant blue skies, with only some unpredictable gusts of winds to slightly hamper the otherwise mile-high mood. 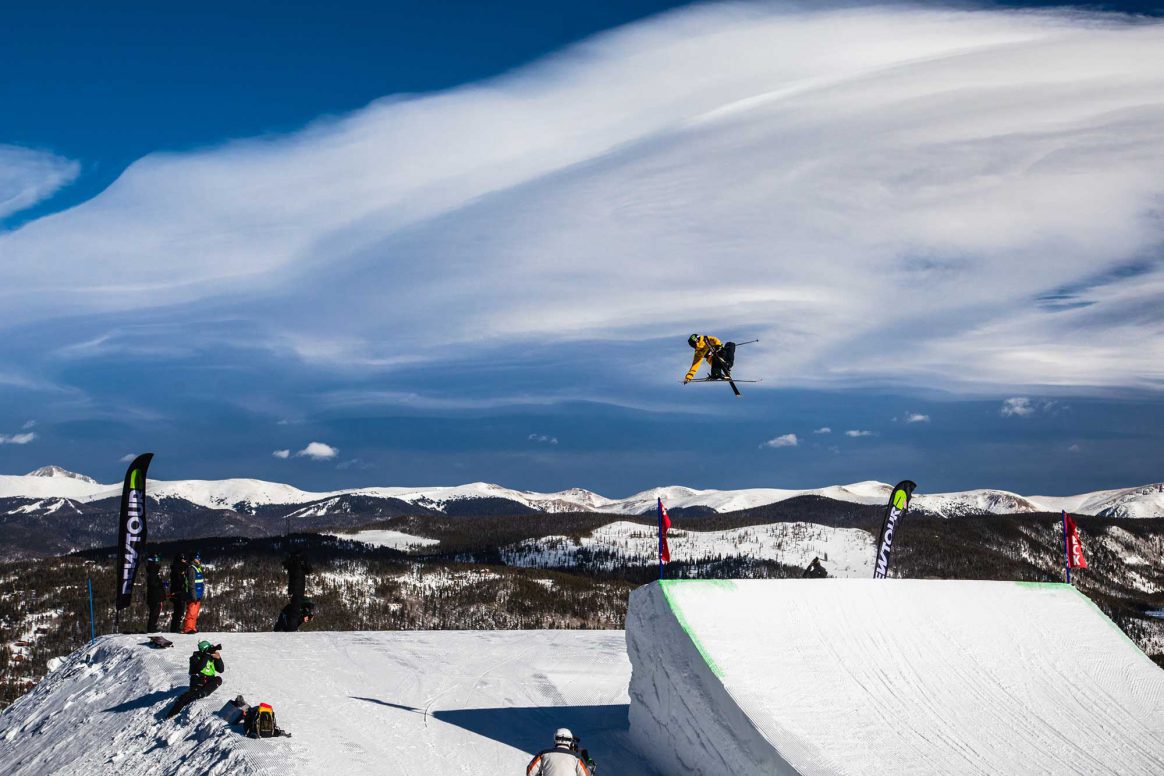 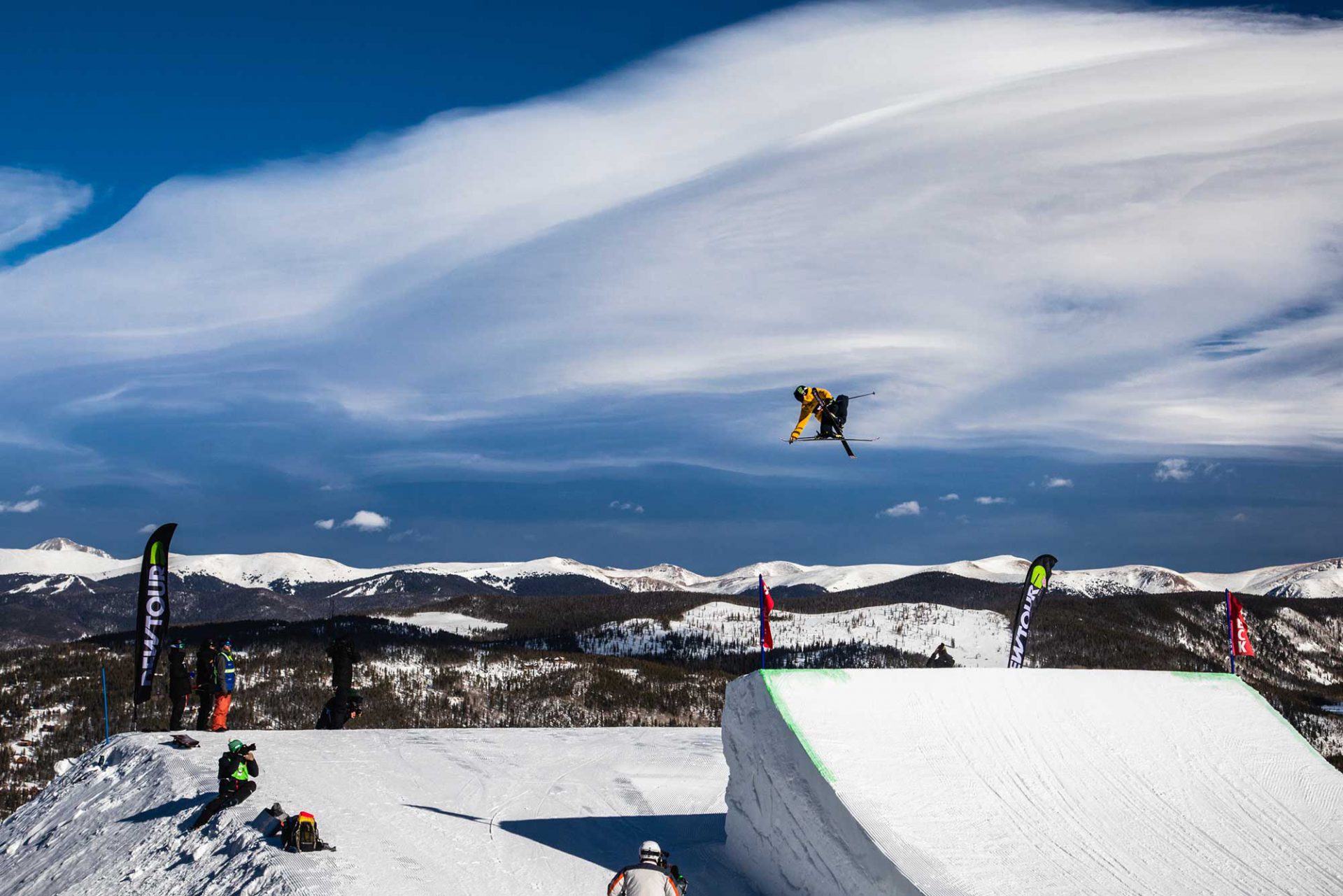 James Woods was one of several competitors to struggle with wind in the jumps. Photo: Jamie Walter

Things kicked off in the jumps section, where as the first rider on-course Fabian Bösch let everyone know how high the level would be, posting an 88.33 with a switch left double cork 1440 double Japan, switch right double misty 1260 safety and a left double cork 1620 blunt.

Bösch’s run screamed “game on,” but the wind quickly proved itself an issue, beginning to send the jump flags whipping wildly and interfering with several following runs, where Oscar Wester, Teal Harle and James Woods all looked to be having trouble. The next to step up big was Bösch’s Swiss teammate Andri Ragettli, who banged out a right dub 1260 tail, his new switch left misty 16 safety, and a left dub 16 tail for the first score in the 90s, a 91.33. 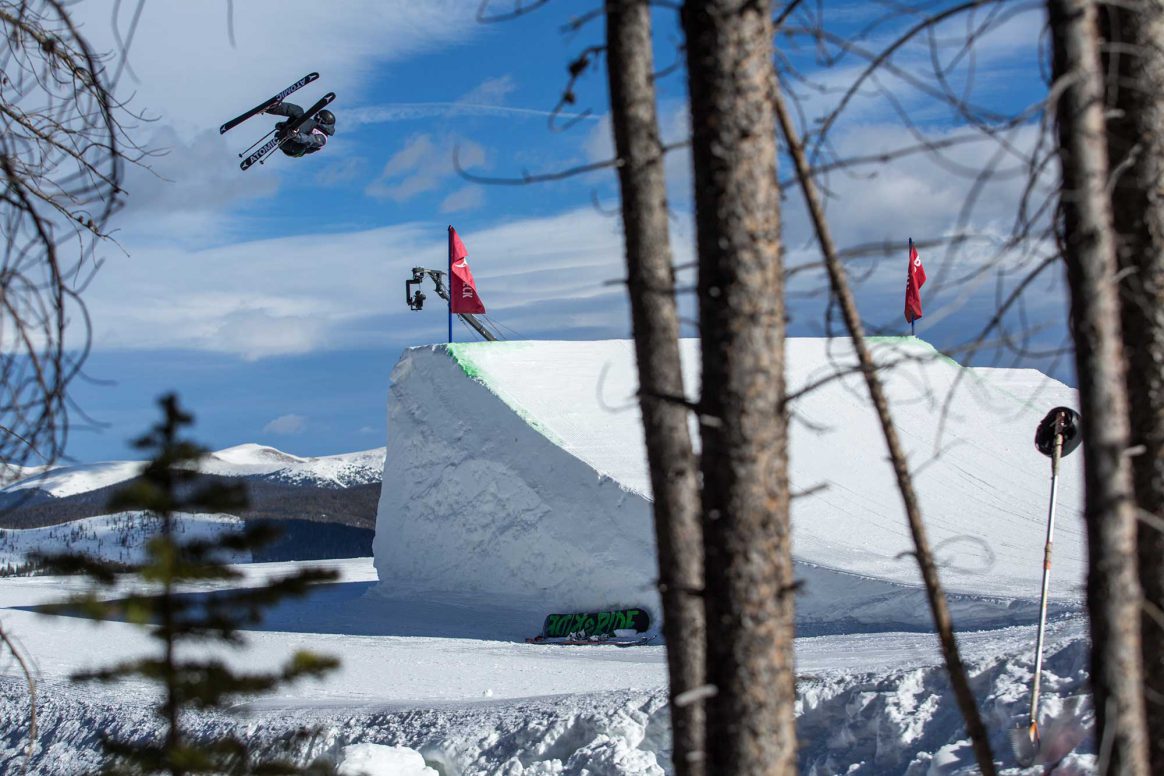 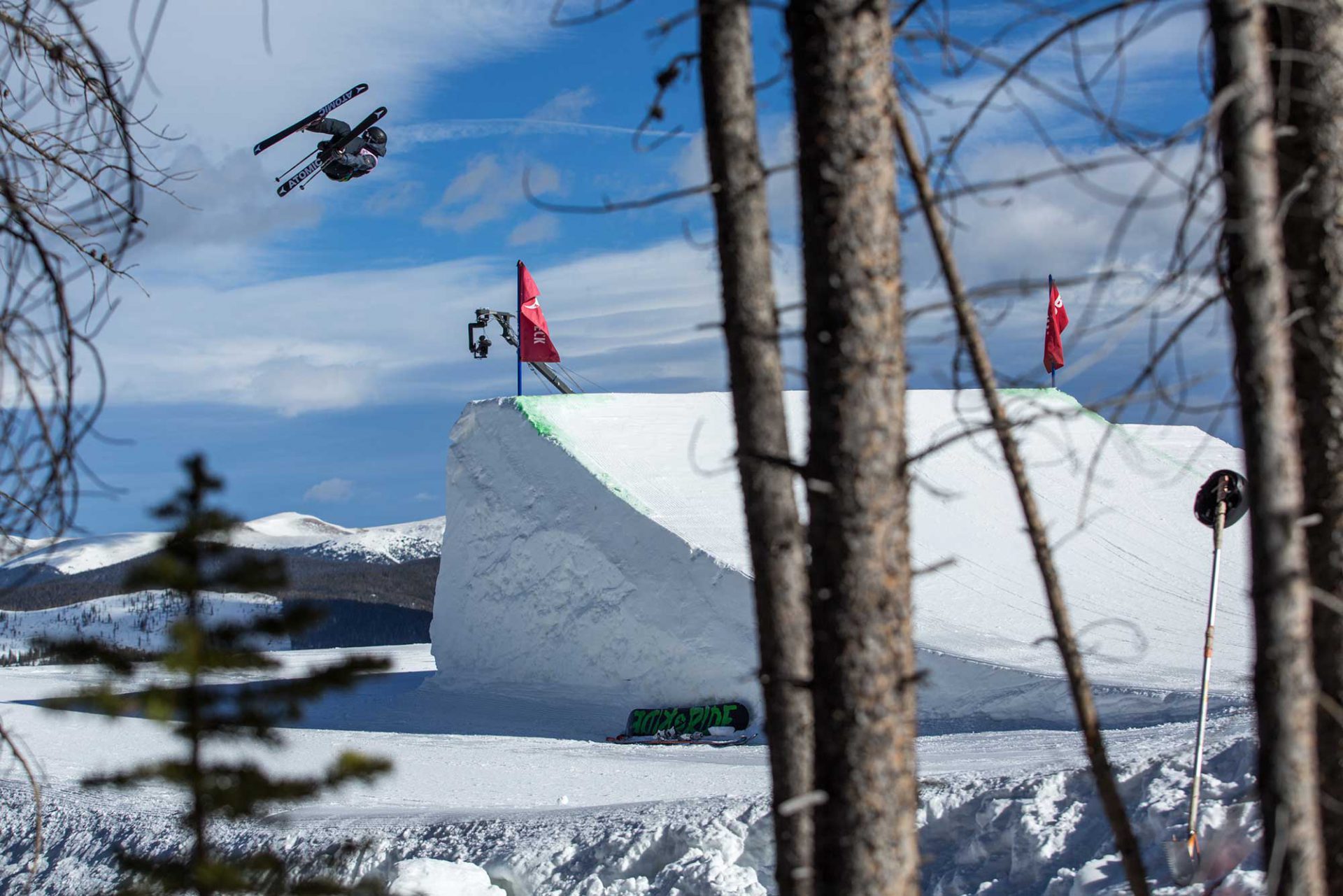 Alex Beaulieau-Marchand and McRae Williams both landed runs, but judging seemed to indicate that having “just” a 1080 in your run would make it hard to break into the top scores. At this level of competition, the 10s have become 14s, and the 12s are now 16s—at least, if you want to win. 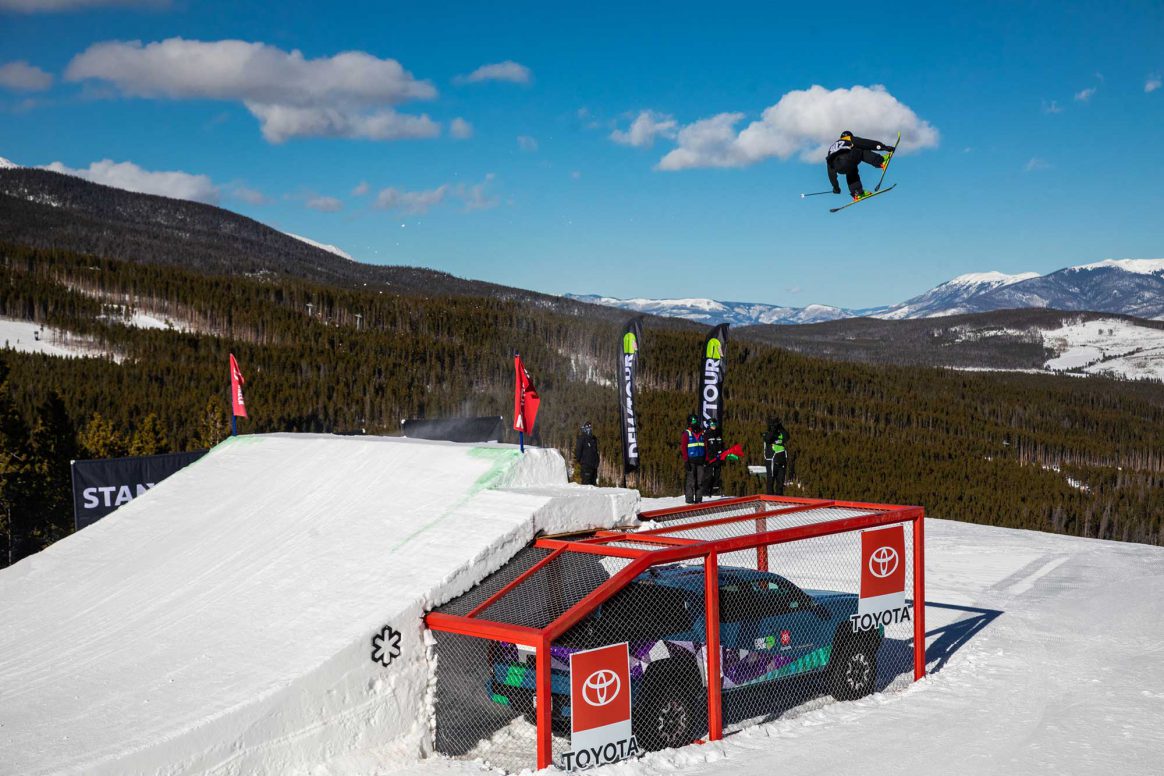 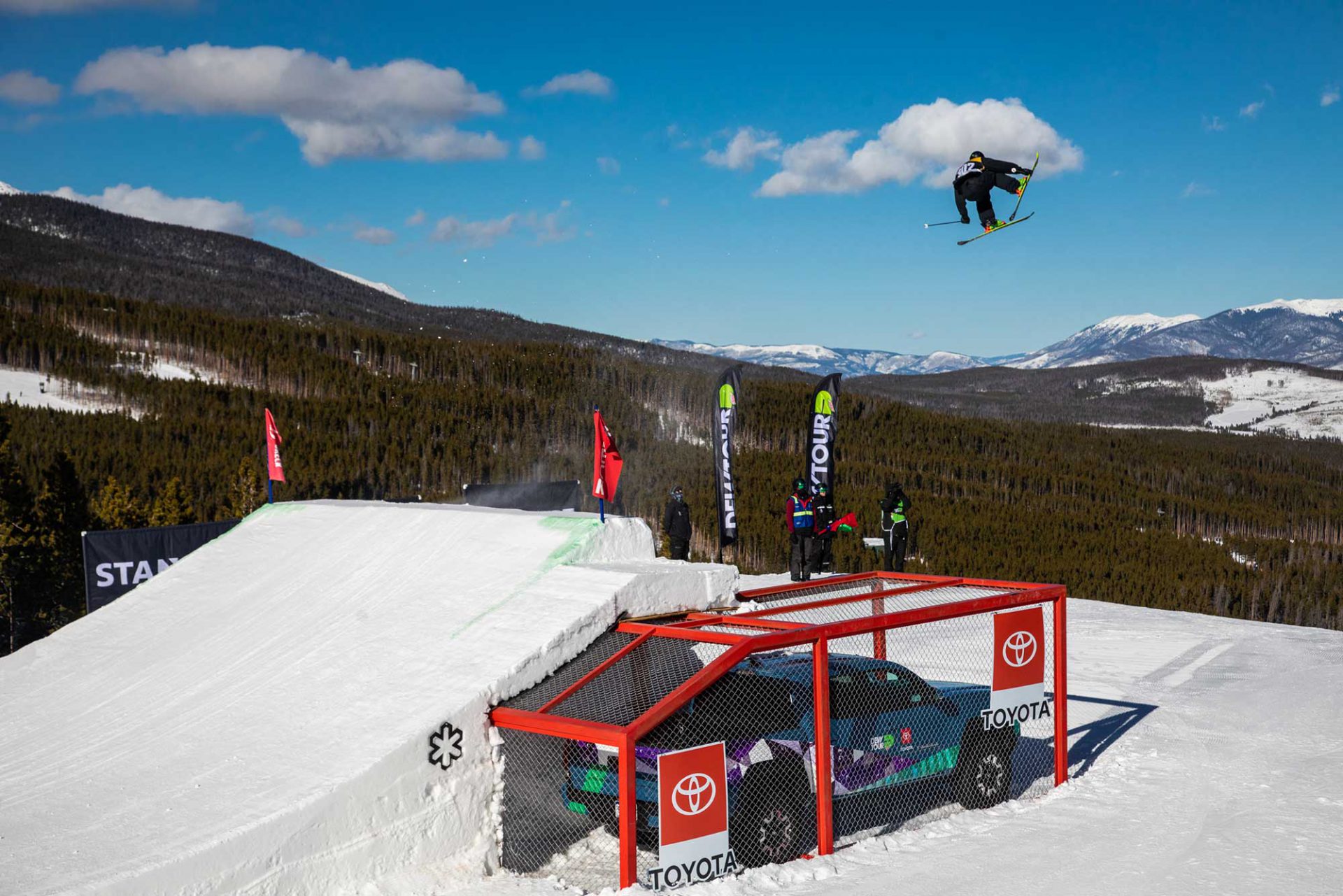 ABM was gunning for the podium and tossed the only triple besides Henrik, but wasn't able to link it in a clean run. Photo: Walter

On Run 2, Bösch stomped his run even more cleanly than before, bumping his score up to 92 and into third place. Ragettli also seemed to improve on his run, but the judges seemed unwilling to dole out any more points for his switch dub 16 to forward dub 16 combo. James Woods came through with a run to keep him in contention, scoring in the high 80s—but it was already clear that the podium would be reserved for scores of 90 and above. On the final drop of Round 2, Henrik Harlaut made it be known that he was also in the running, stomping a left double bio 1260 safety, a switch right 1080 high Phil grab, and his signature switch left triple flatspin 12 mute on the final jump to score an 89.67, just outside the 90s club. 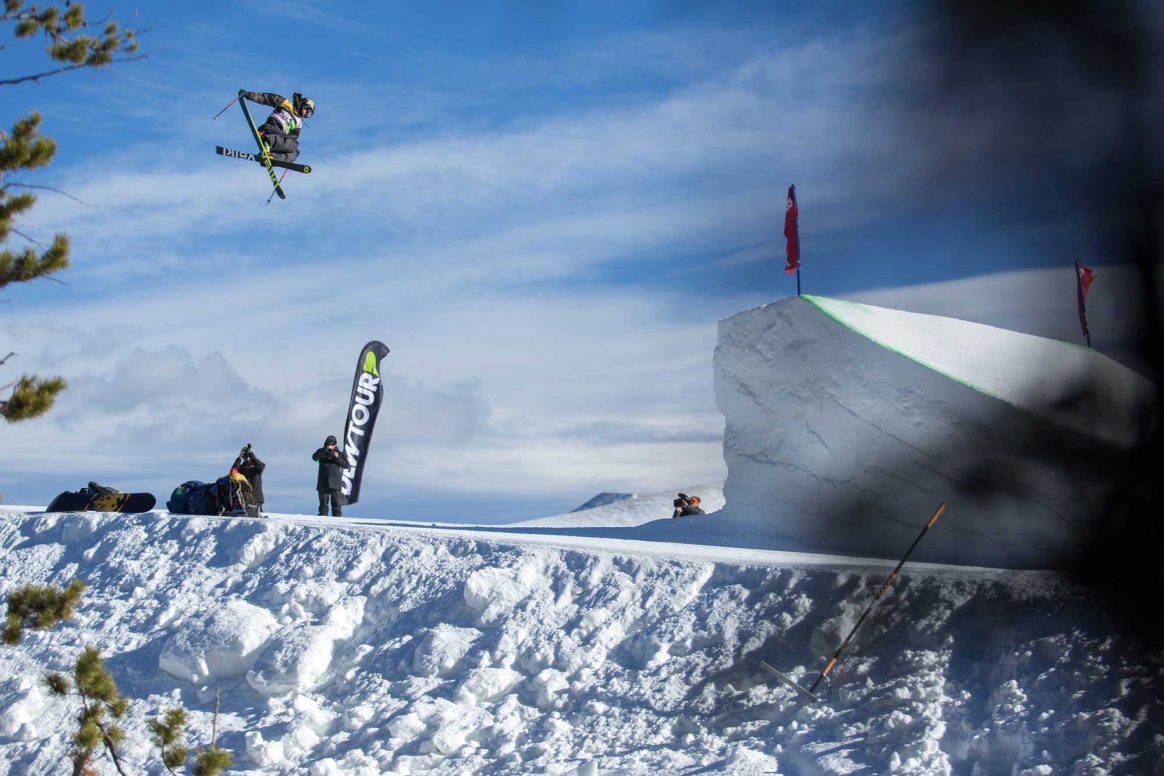 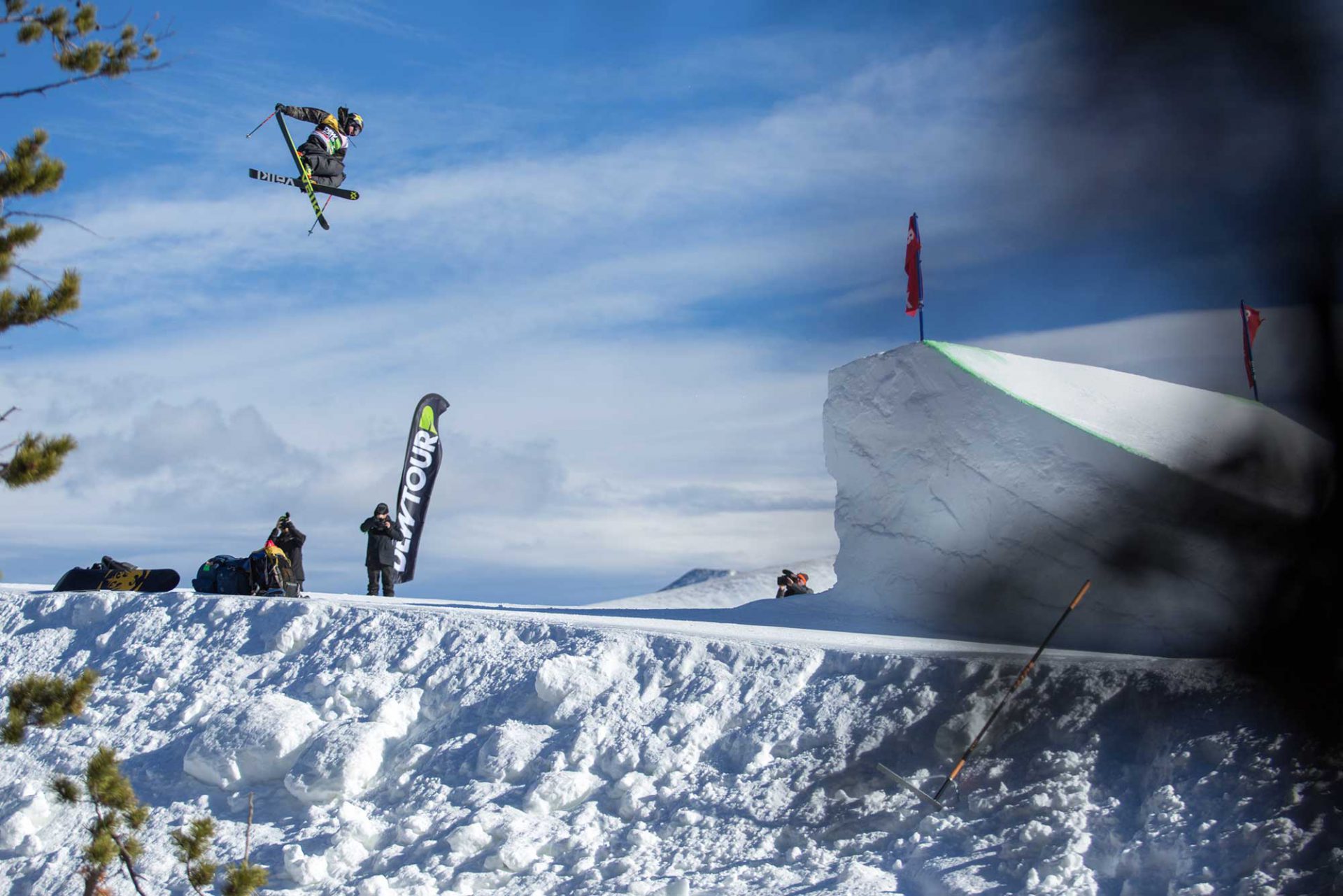 McRae Williams put in some hard work on Saturday, but it just wasn't his day. Photo: Durso

Bösch went three-for-three on his third jump run, even managing to bump his score up to a 93.3, while Oscar Wester, who looked to be a bit off today, landed a clean run for an 87.67 to stay in contention. Ragettli went three-for-three as well, showing off that Swiss consistency. James Woods was able to improve his score slightly, while on the final jump run of the day, Harlaut struggled with a headwind and wasn’t able to improve on his fifth-place jump score. He went on to criticize that score in his post-jumps interview: “I think I got a low score, with the only triple and the only double rodeo,” Harlaut told Dew Tour’s Tina Dixon. “But 89 should be good going into the rails. Hopefully the judges give me a little extra there!” 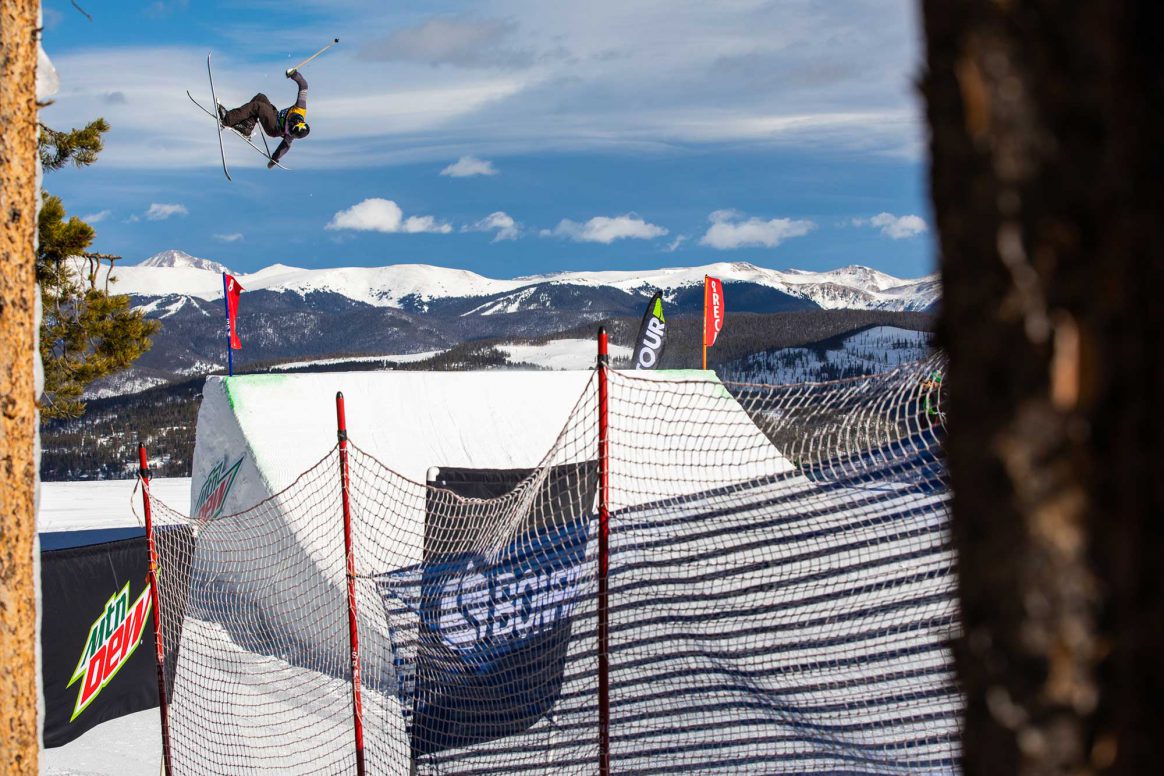 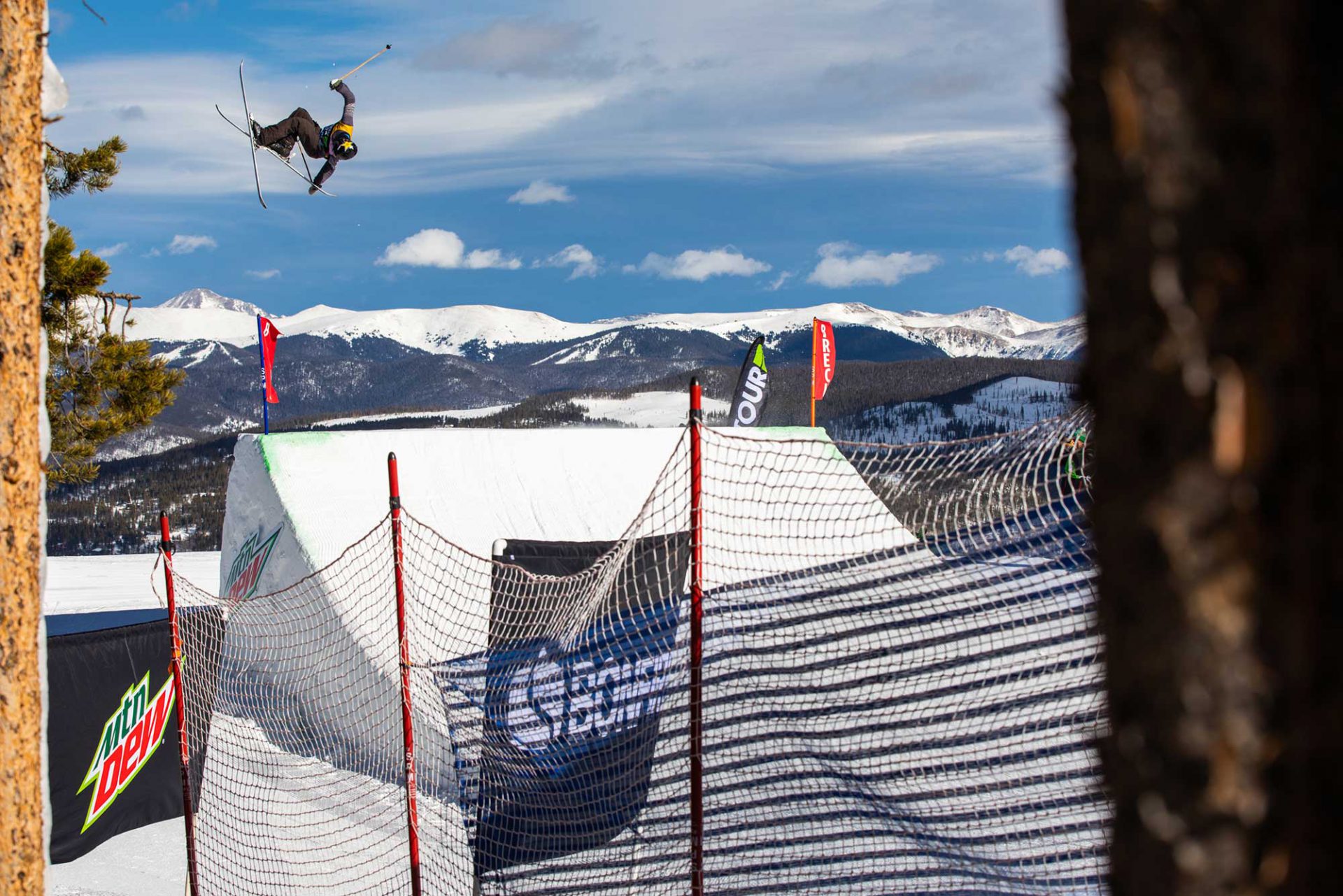 With Hall, McEachran, Bösch and Ragettli sitting comfortably in the 90s and Harlaut outside looking in, the contest turned to the jibs section, where the level quickly proved to be high and the judging unpredictable. Beaulieu-Marchand was the first to deliver with a high-scoring run, linking up a 180 to butter box to switch 270 backslide to switch on the first feature; a switch right tails 2, pretzel 450; a 450 on, 450 out on the donkey; and a switch 2, pretzel 450 out on the final rail for a score of 87. (Somewhere along the line there, the switch 2, 450 out has become a completely standard and un-noteworthy trick.) 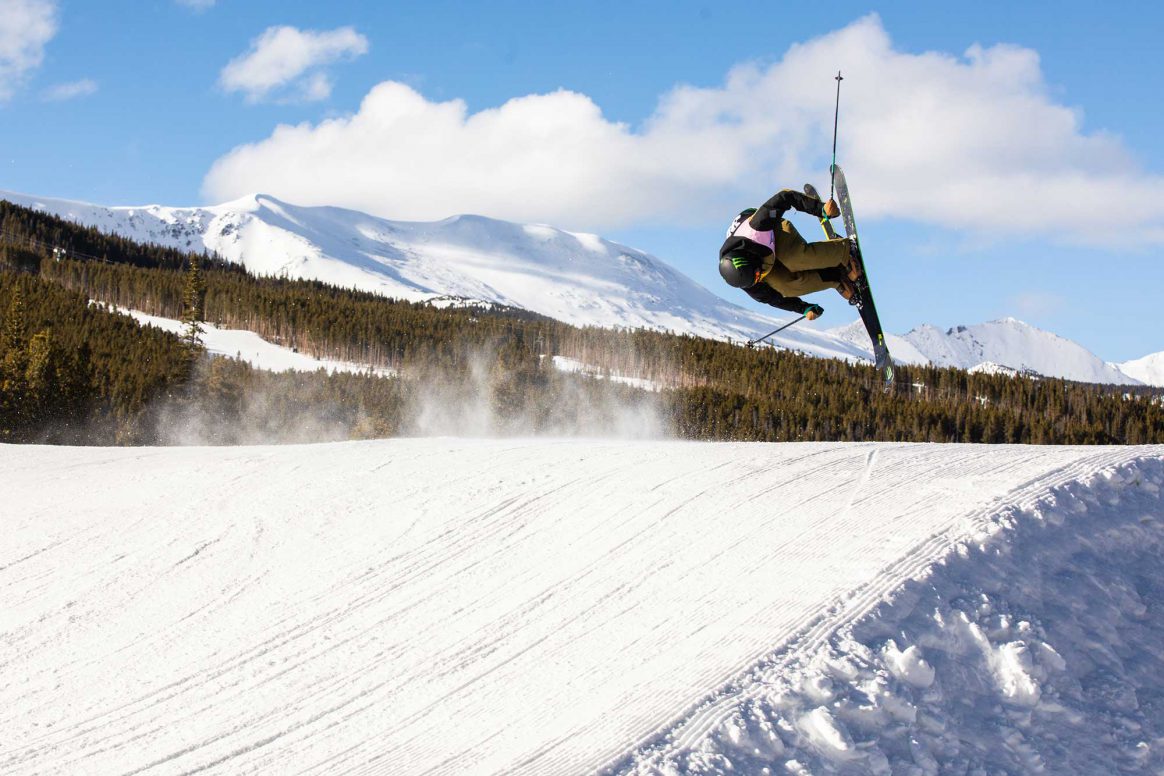 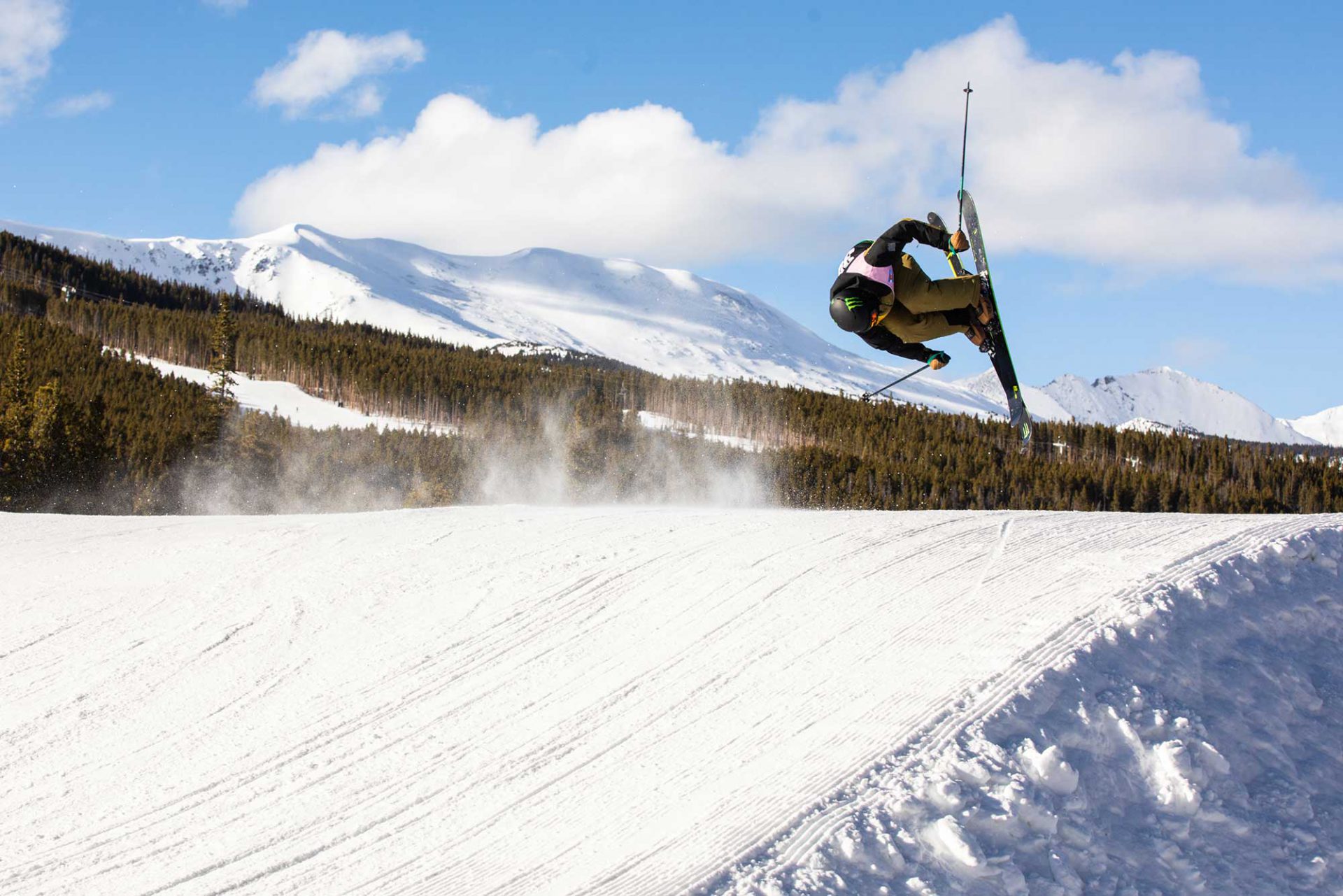 Ferdinand Dahl struggled with wind in the jumps and kept it mellow in the rails, he'll be looking to the next contest. Photo: Walter

Ragettli, meanwhile, stepped up with a huge rail run consisting of a front swap, front 4; 2 on, front swap, 4 out; switch 2, front 6 on the donkey; and a switch 2, back 6 on the last rail, spinning to win but only rewarded with an 84.67. Which, and even taking into consideration that Ragettli often gets scored lower than at least he expects, seemed a bit of a stretch for one of the most technically proficient runs of the day. Rounding out Run 1, McRae Williams laced up one of the biggest transfers of the day, a blind-swap transfer to front 2 out on the third rail tier, for a score in the 80s, while Evan McEachran made strong moves for the overall win, bagging a score of 90 with a run including a big right 270 on, 270 out on the wallride and nailing the only transfer harder than Williams’ on the final rail tier. The last skier to drop was Harlaut, whose cajoling of the judges actually seemed to pay off after he scored a huge 92 with a left 450 on, pretzel 2 out; switch tails on, nollie front 2 out; disaster right 450 to switch; and a switch 2 on, 4 out; moving him into second place behind McEachran. 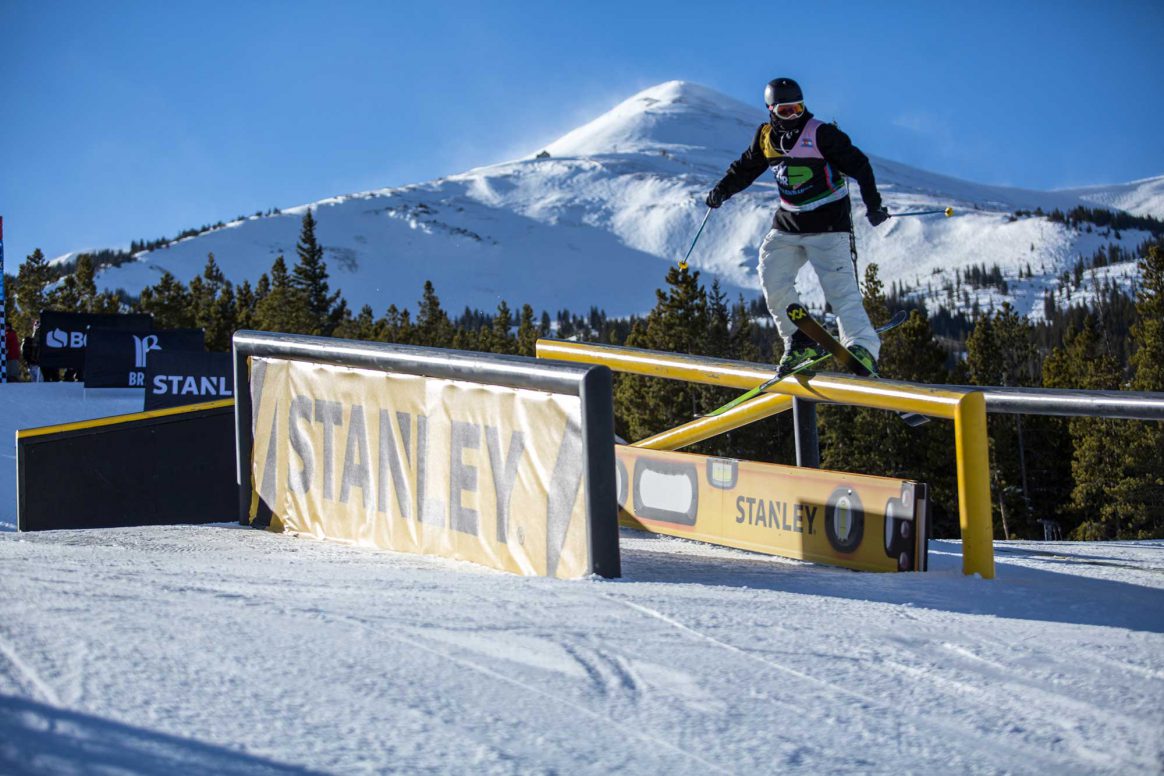 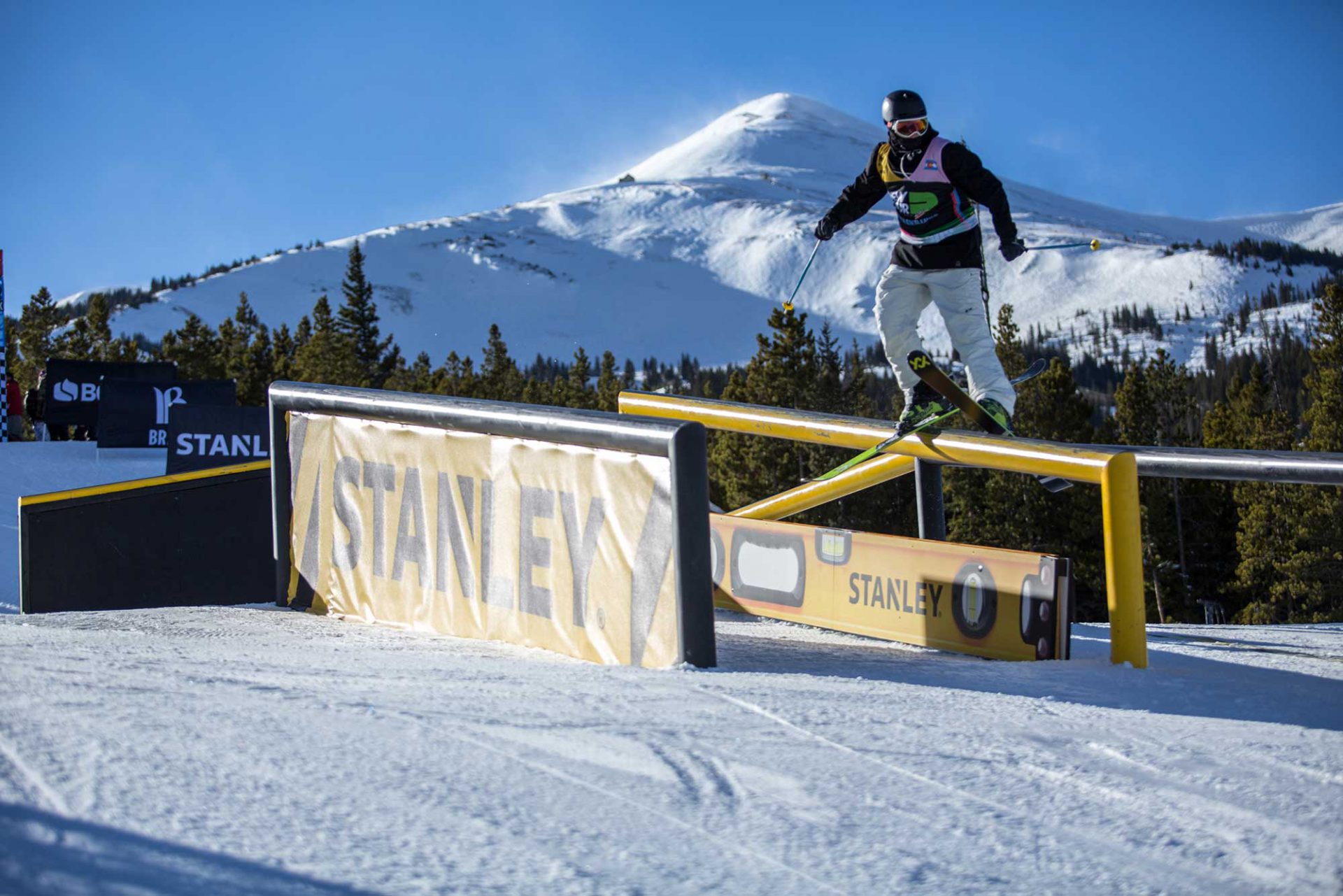 As the light dwindled on the jibs section, Alex Hall stepped up on Run 2, swapping and spinning his way through the crazy technical rail run that saw him post the highest score in Thursday’s Team Challenge, but with a front 270 tail-tap out at the end instead of the 450. Still, his score of 89.33 was still good enough to launch him back into first. But Evan McEachran wasn’t having it, adding an incredible front 450 out of his final switch-on rail transfer for a 94 and a four-point lead. 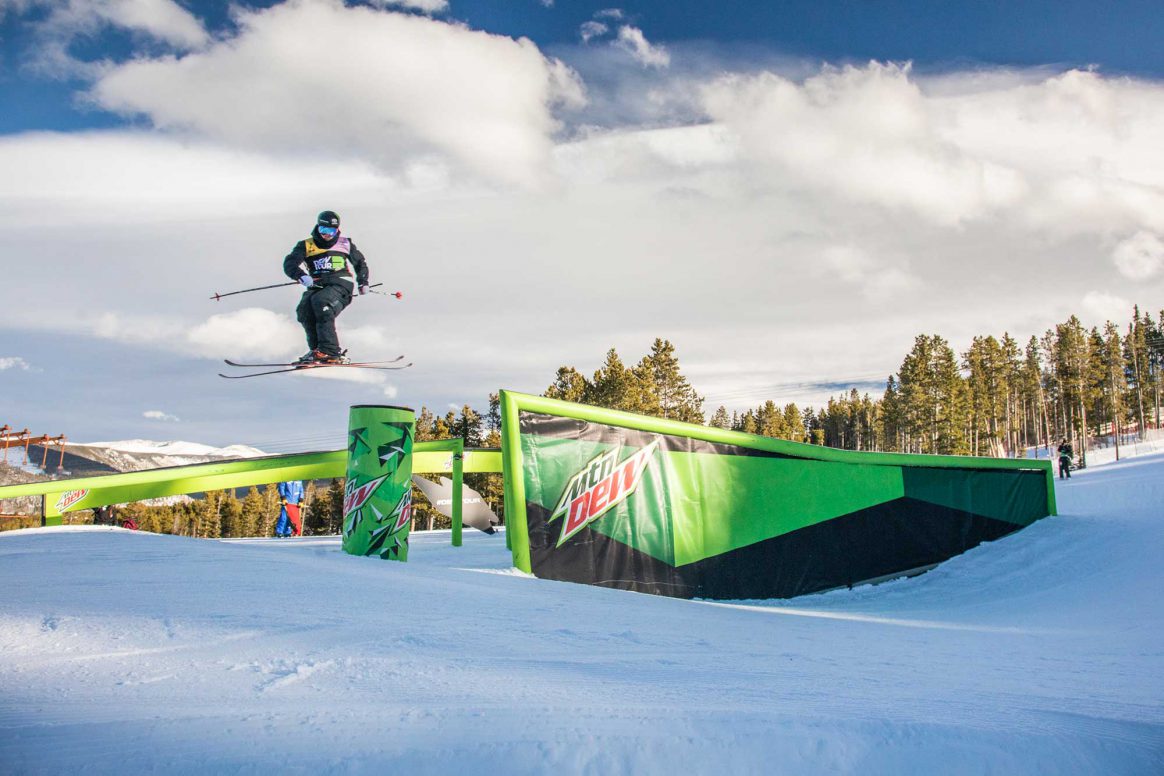 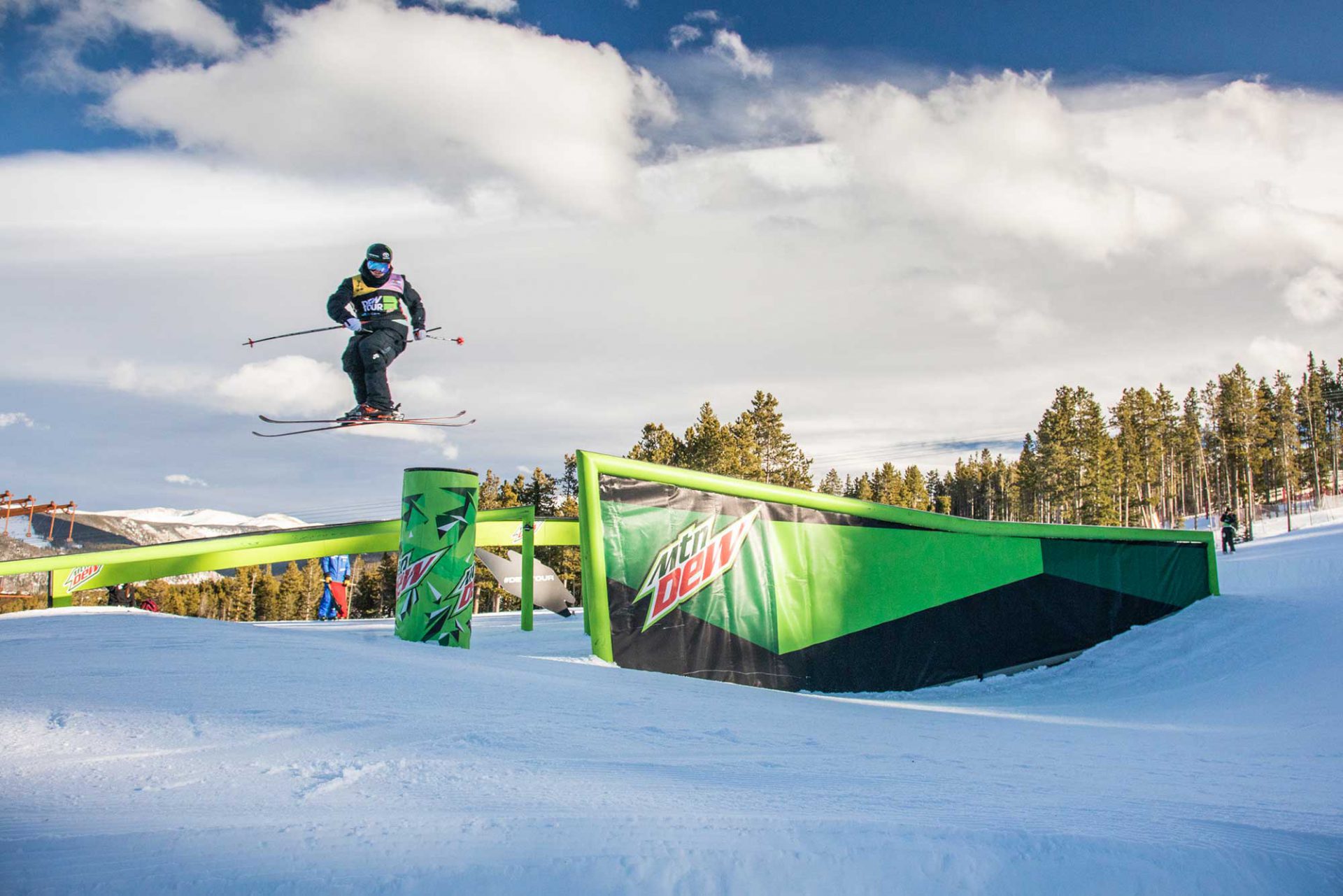 Gus Kenworthy couldn't land the run he wanted in the jibs, but threw down a huge disaster 630 on, 270 out in frustration that ended up being one of the best tricks of the day. Photo: Walter

In Run 3, McEachran and Hall solidified their leads — Hall somehow scoring a point higher, even after missing one of his tricks, while McEachran once again stomped his massive transfer to 450 out, proving himself the most consistent performer of the day and boosting his score to a dominating 94.67. The last rider to drop, Harlaut was unable to improve, and that was a wrap: McEachran on top, A-Hall in second and E-Dollo rounding out the podium on a wild and wacky day of slopestyle in Breckenridge. 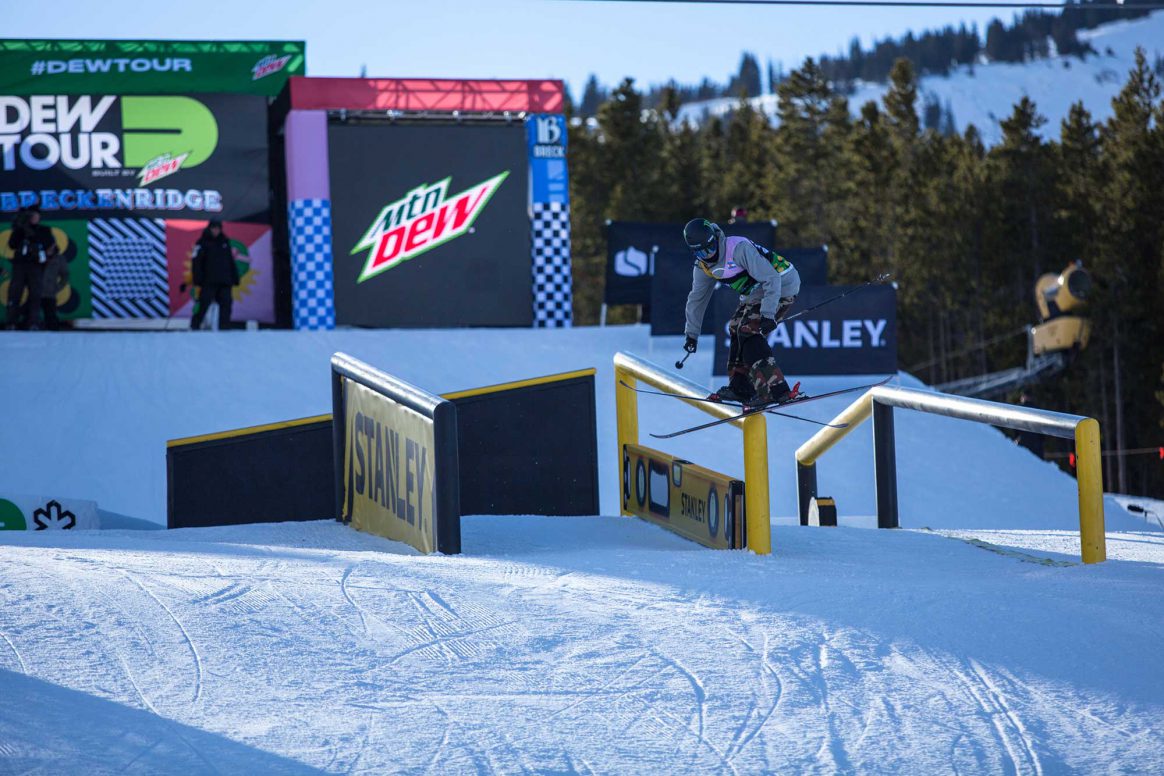 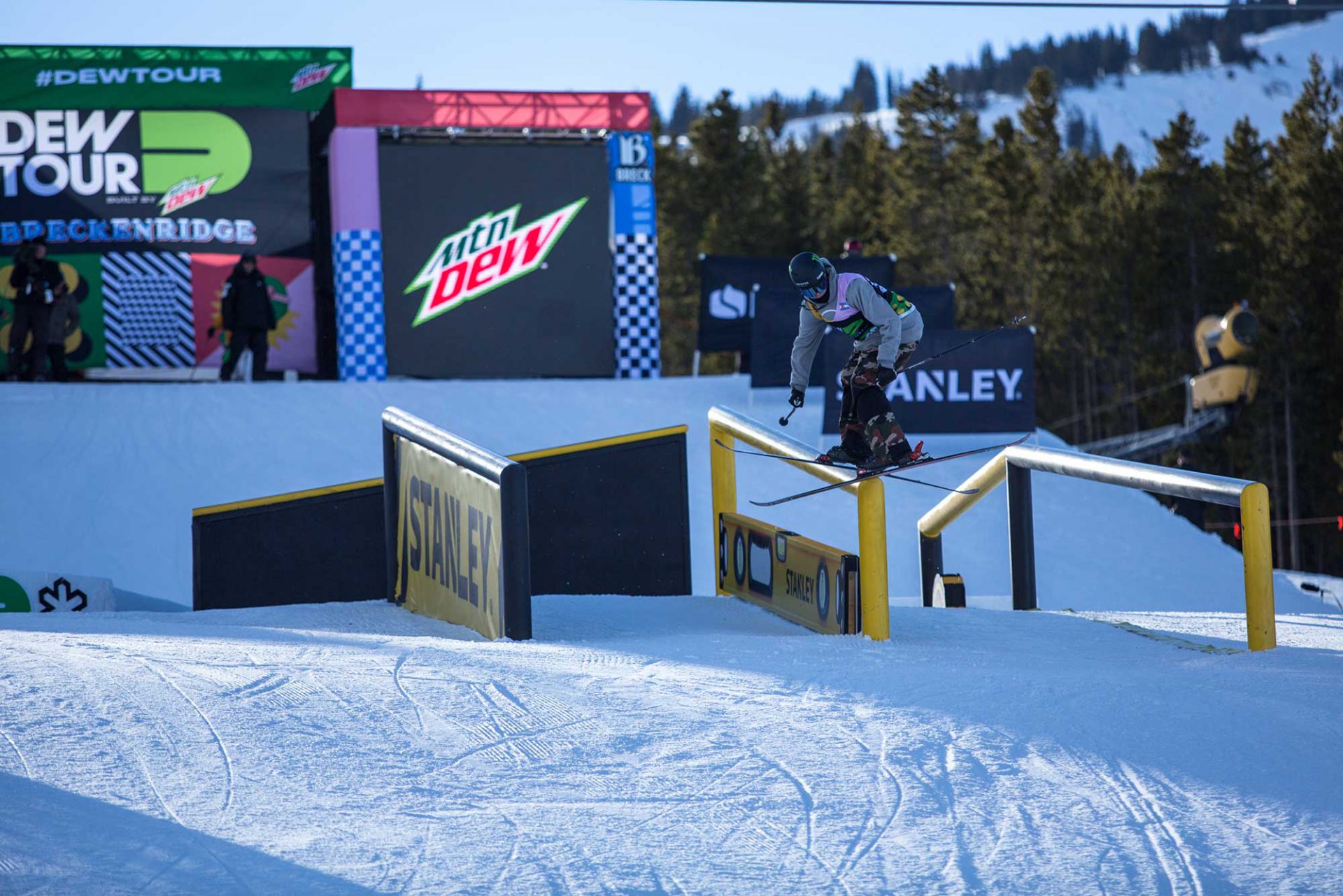 Evan Mceachran proved he was the best rider on the course Saturday. Photo: Durso

“Honestly, I thought i would get a higher score in the jumps section than in the rails, but i guess they liked my line selection,” said McEachran in his post-win interview. “I was having so much fun, the weather was perfect, everyone was having a time, and this is what we do.”

“I’m insanely excited, and I can’t wait to go party tonight,” he added. 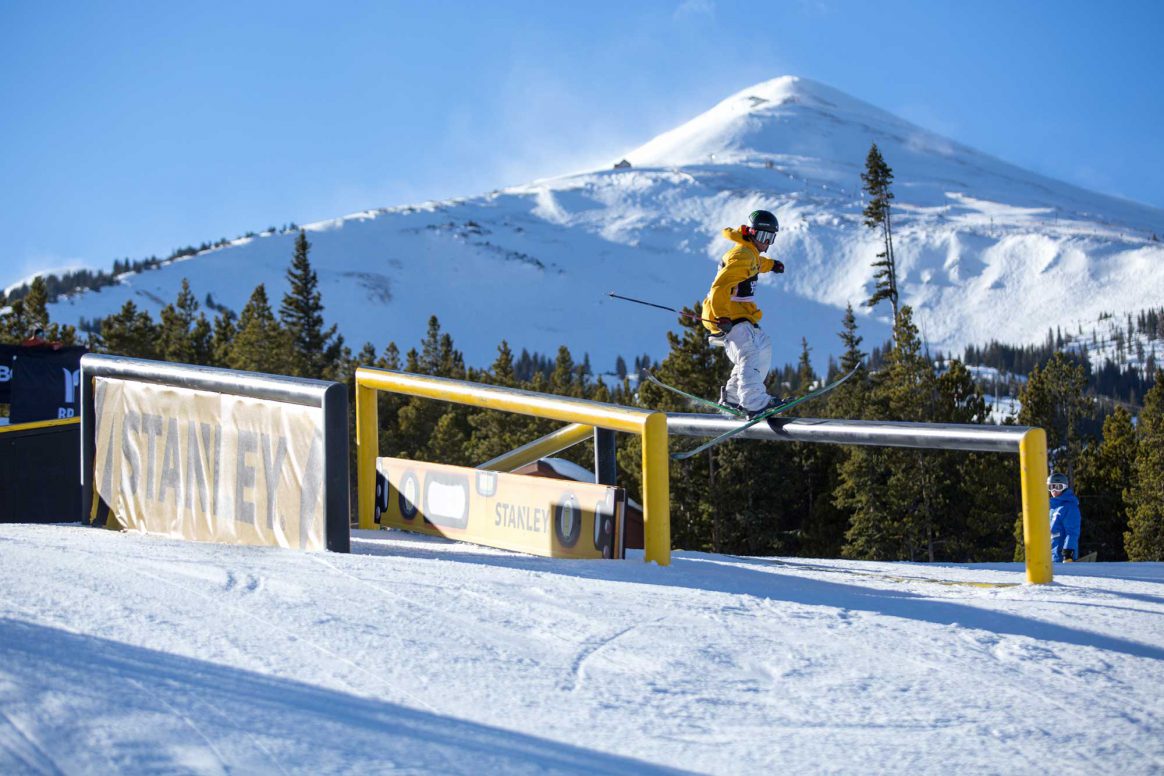 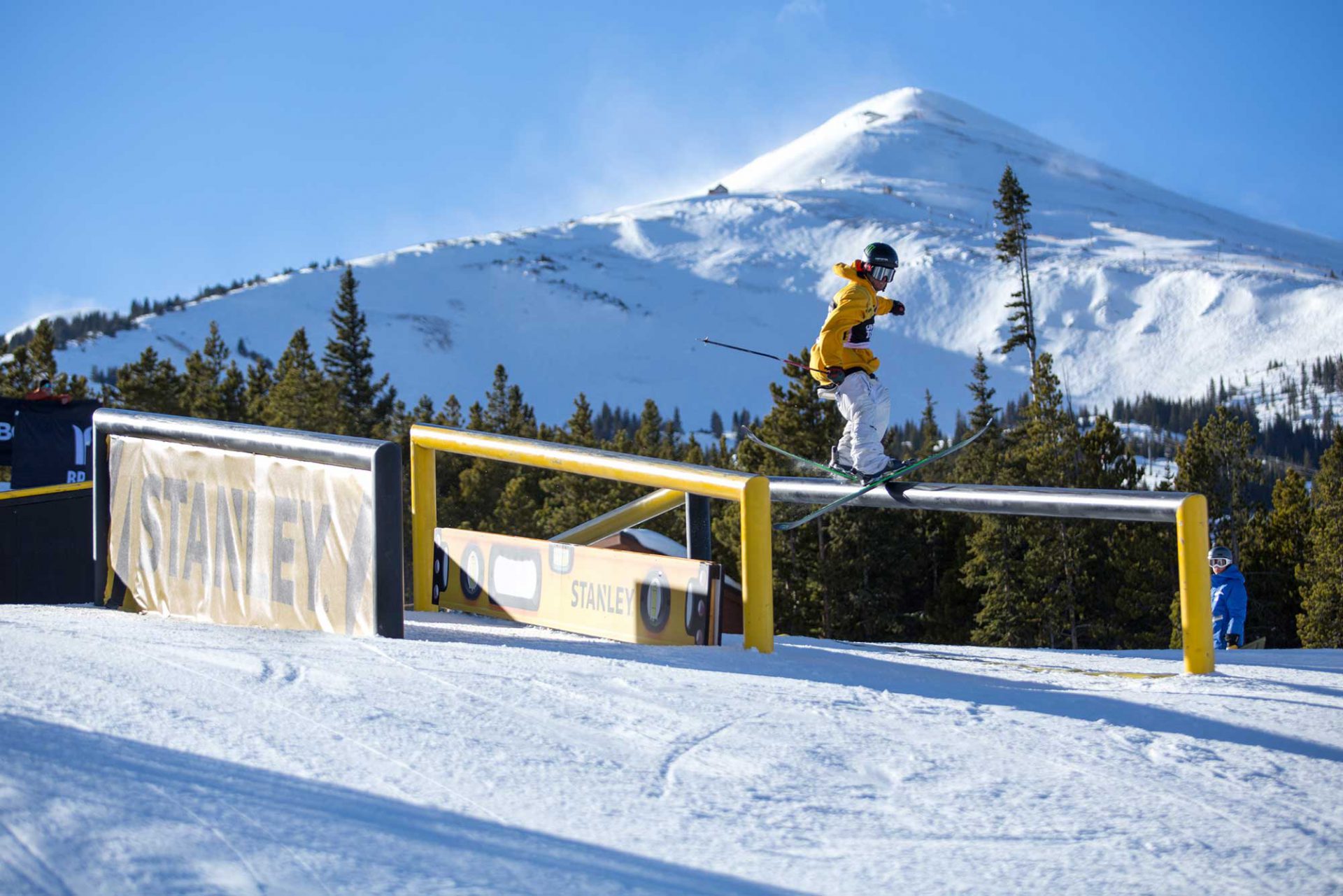 Ski competition at the 2018 Dew Tour wraps up with the men’s contest Today in the Modified Superpipe. 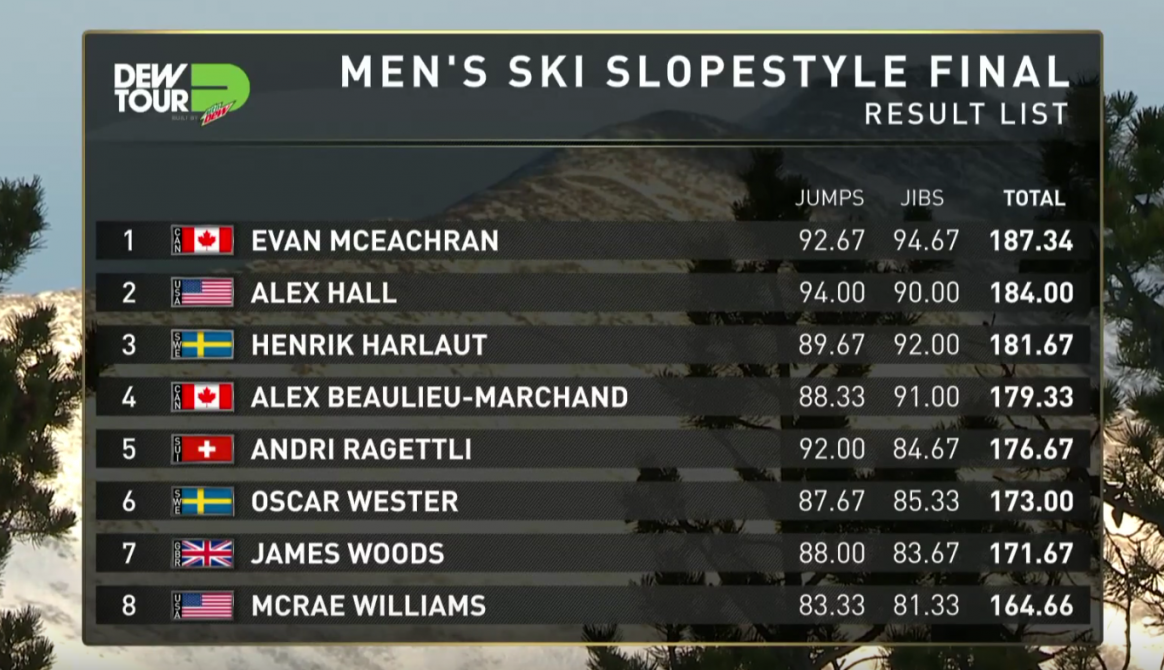 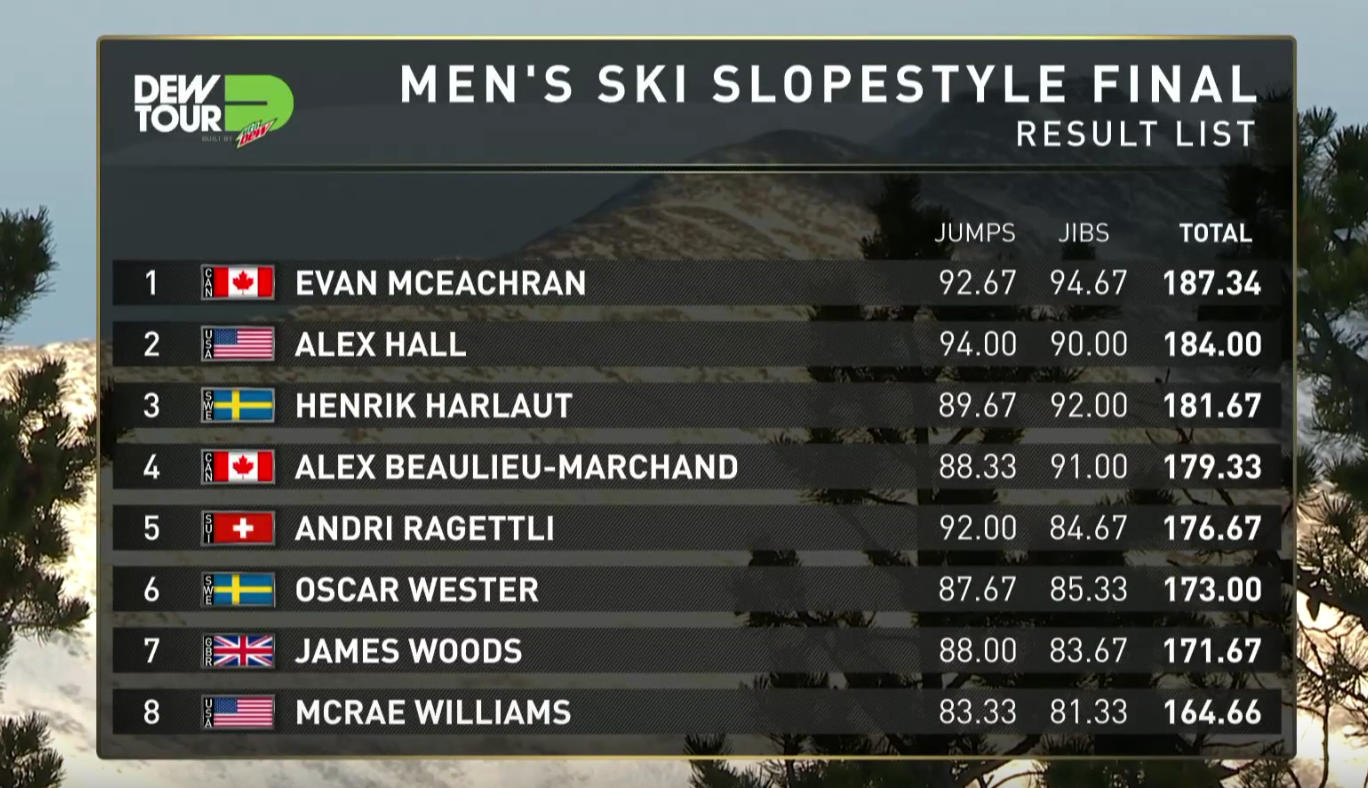 This is Armada: Team Manifesto

This is Armada: Team Manifesto