Another edition of The Nines is upon us, and you all know what that means: It’s time to take a gander at some of the most progressive snowpark design work taking shape on the planet today. The venue: the Plaine Morte Glacier above Crans-Montana, Switzerland. 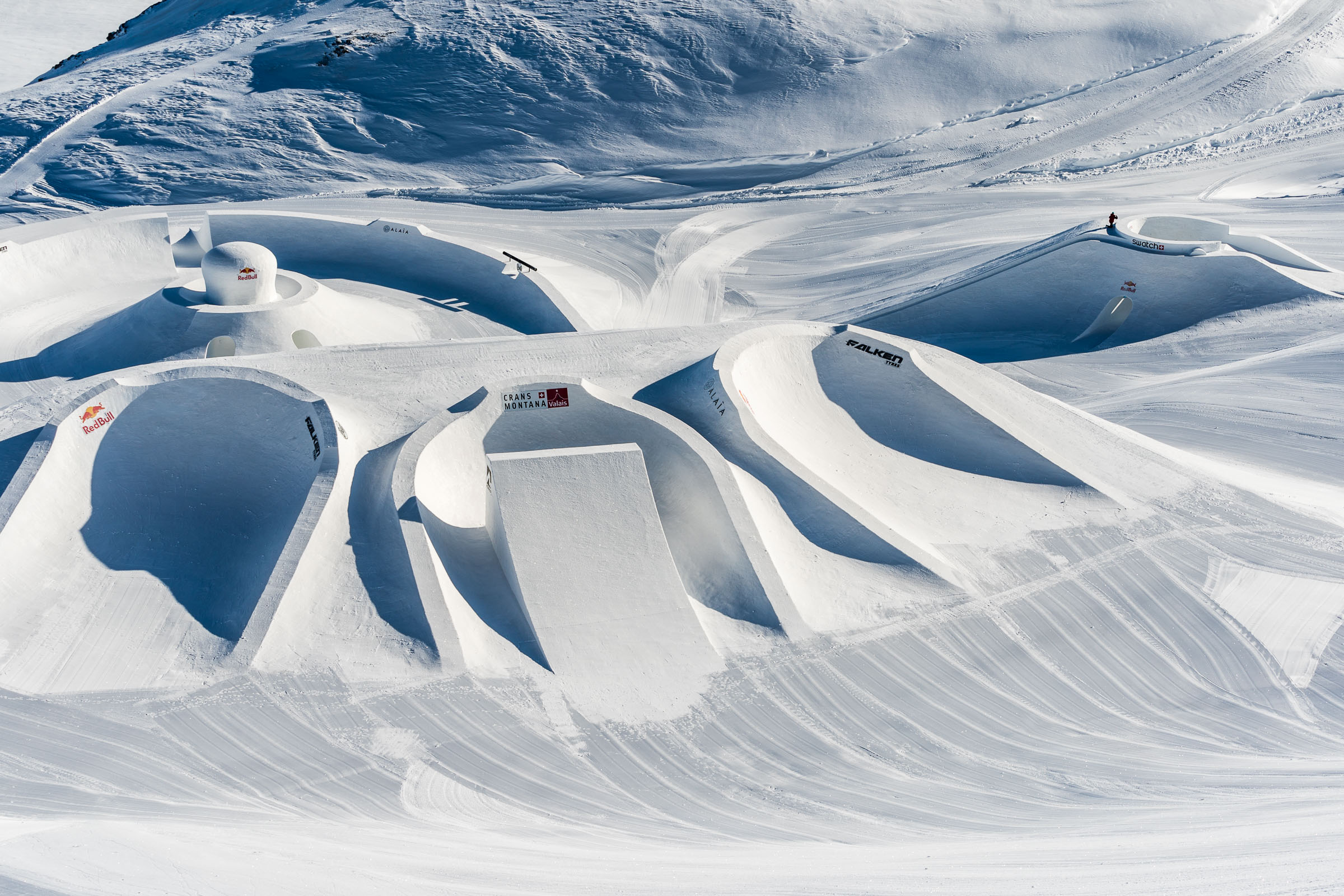 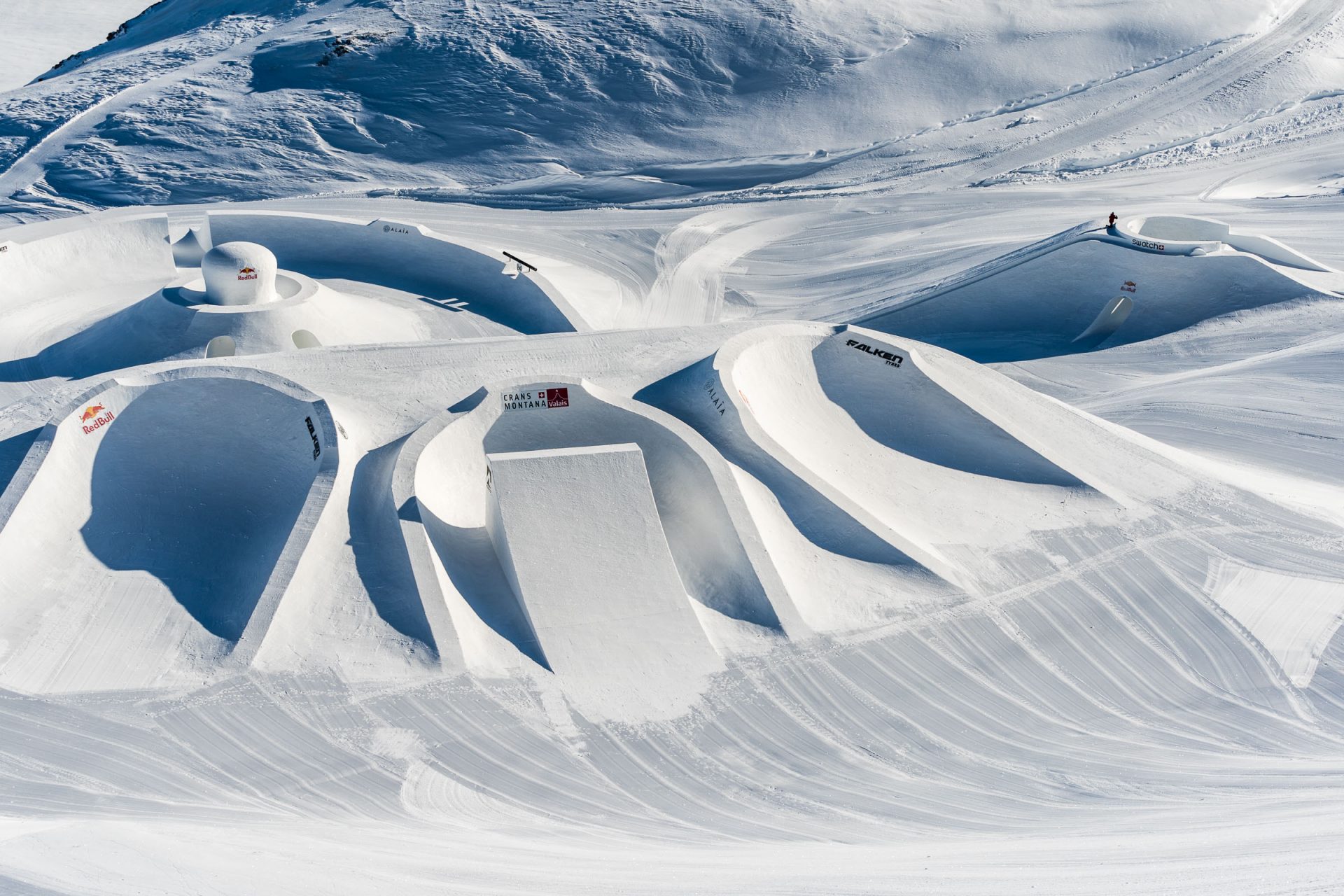 The "Perfect Jump," the Sphere and the Downward Spiral: this year's venue for progression at The Nines.

Say what you will about The Nines: It’s too corporate. It’s too slick. It’s too branded. It’s too mainstream. It’s too focused on “world’s firsts.” After you’ve said all of that, there still remains this to be said: Nobody else in the world is building terrain park setups at this level.

Over the years we’ve seen a lot of crazy setups from The Nines, from snow castles to gap jumps to full-on skiercross courses. In 2022, however, The Nines have turned over a new leaf. The new design cues are rounded, organic, natural, with each feature flowing seamlessly into the next. As snowboarder Hailey Langland put it, “This entire park feels kind of like an orchestra—every single feature plays into one another.” 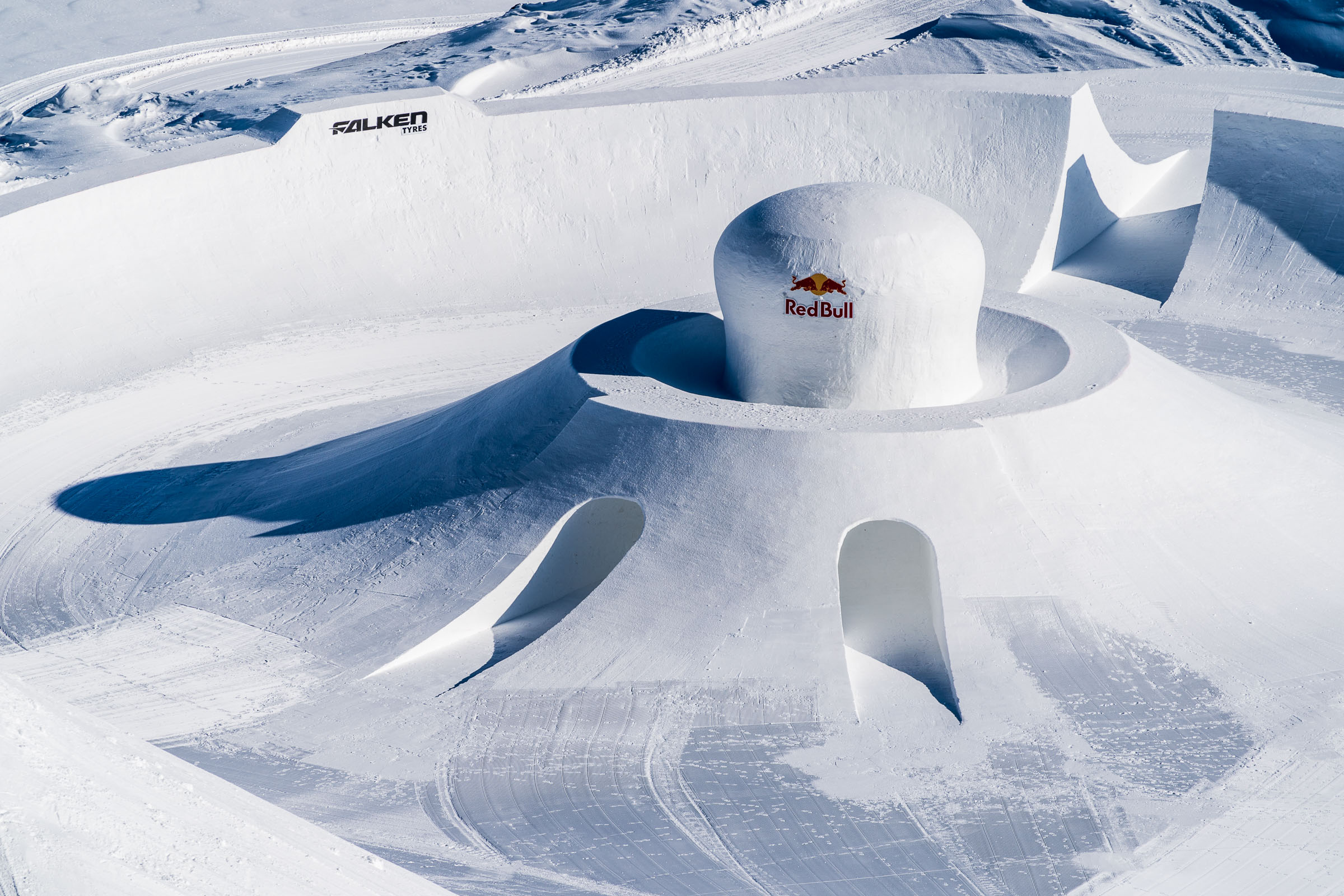 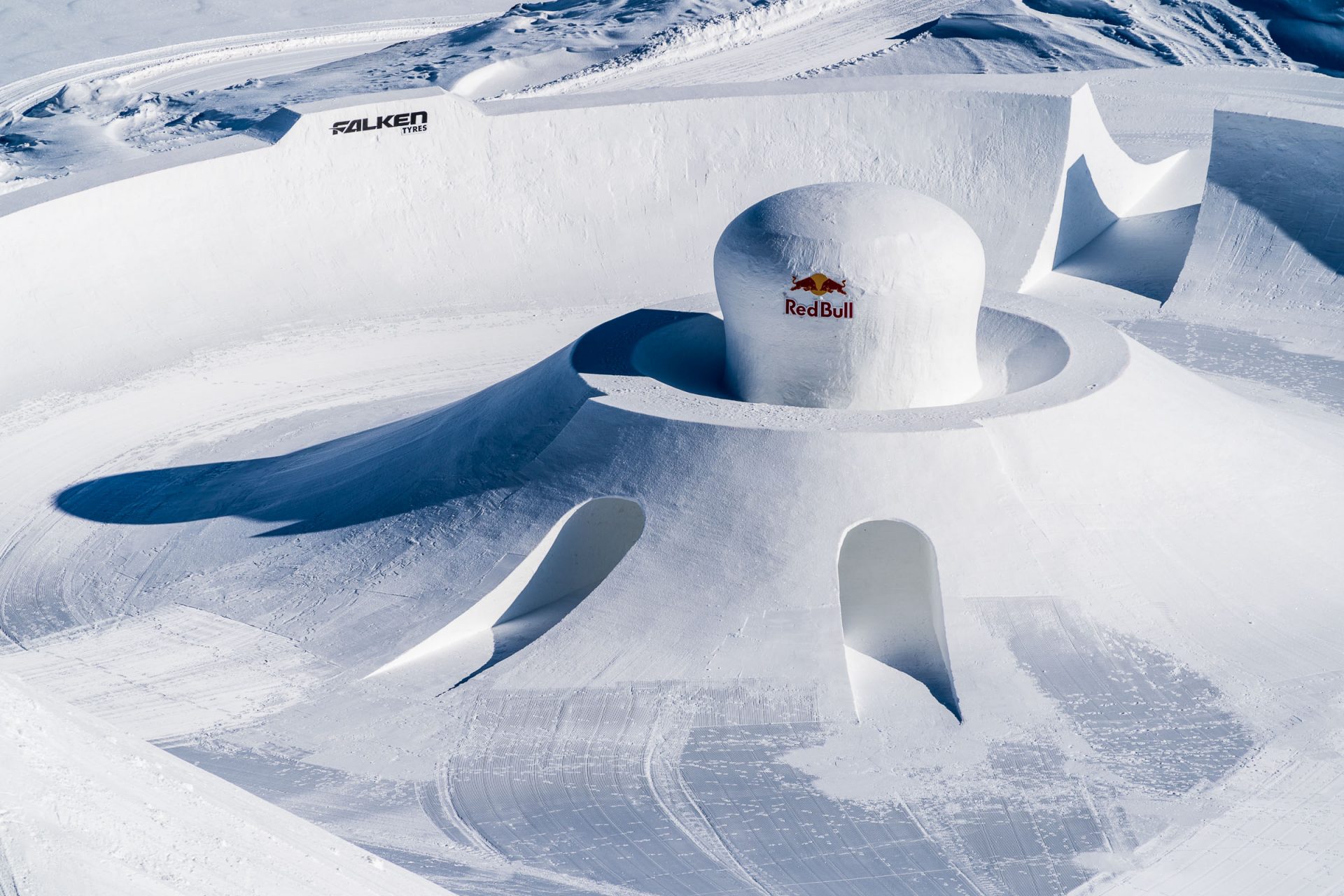 Is it just me, or is it cold in here? Photo: Klaus Polzer

This is The Sphere, aka The Nipple, aka The Mushroom, aka The Protuberance. It’s eight meters high in the middle, with two tunnels that provide access to an over-vert quarterpipe hit that sends you up, upside down, and back on nearly the same trajectory that you came in on. And believe it or not, this is not the most complex transition to be found in this setup.

If you’re not game for the over-vert sender, you can simply jump up, ride the top of the mushroom, and land on the other side. (Emphasis on “simply.”) And all around the central sphere, the secondary ring provides a bevy of other air and jib options. Transition fiends, eat your heart out. 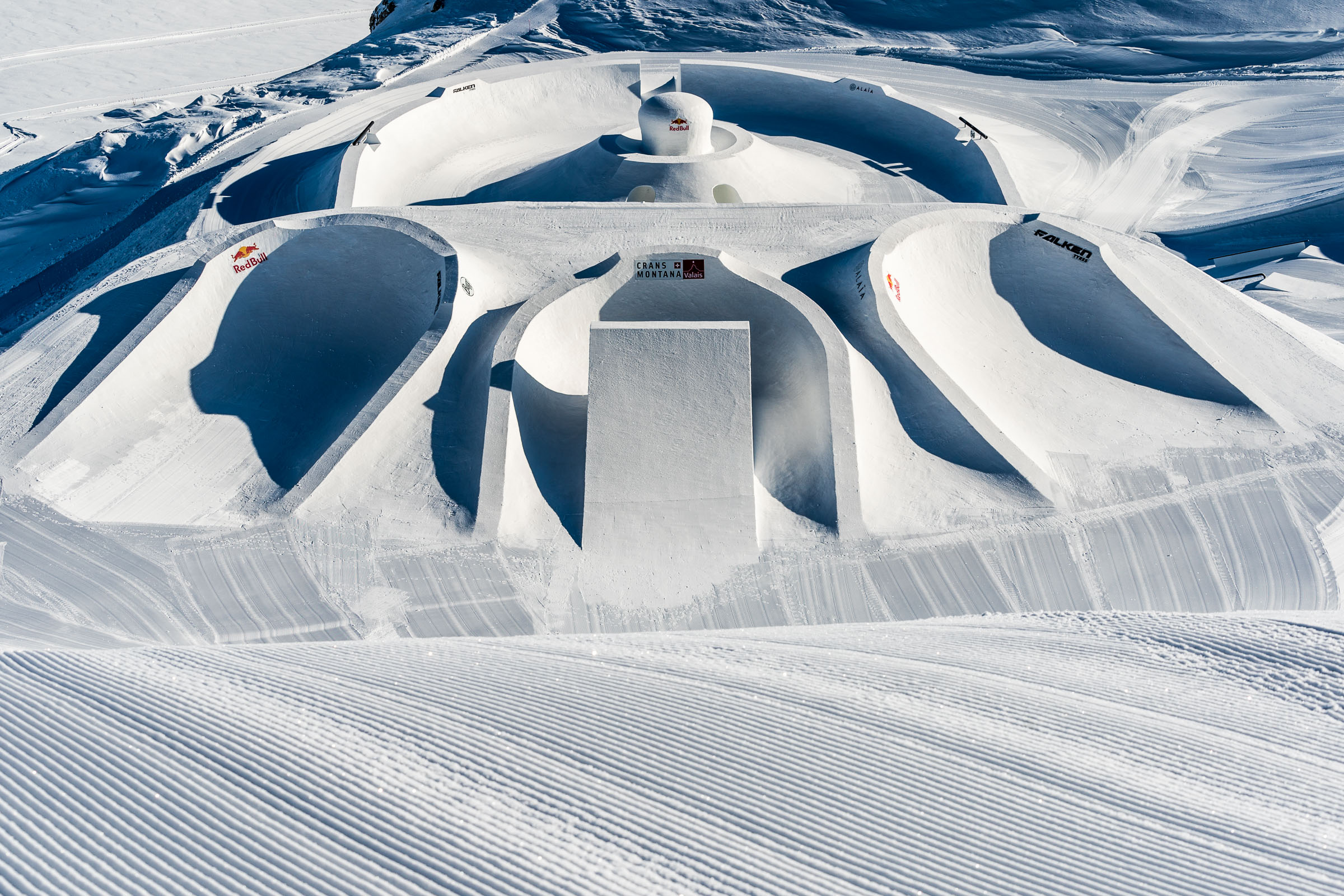 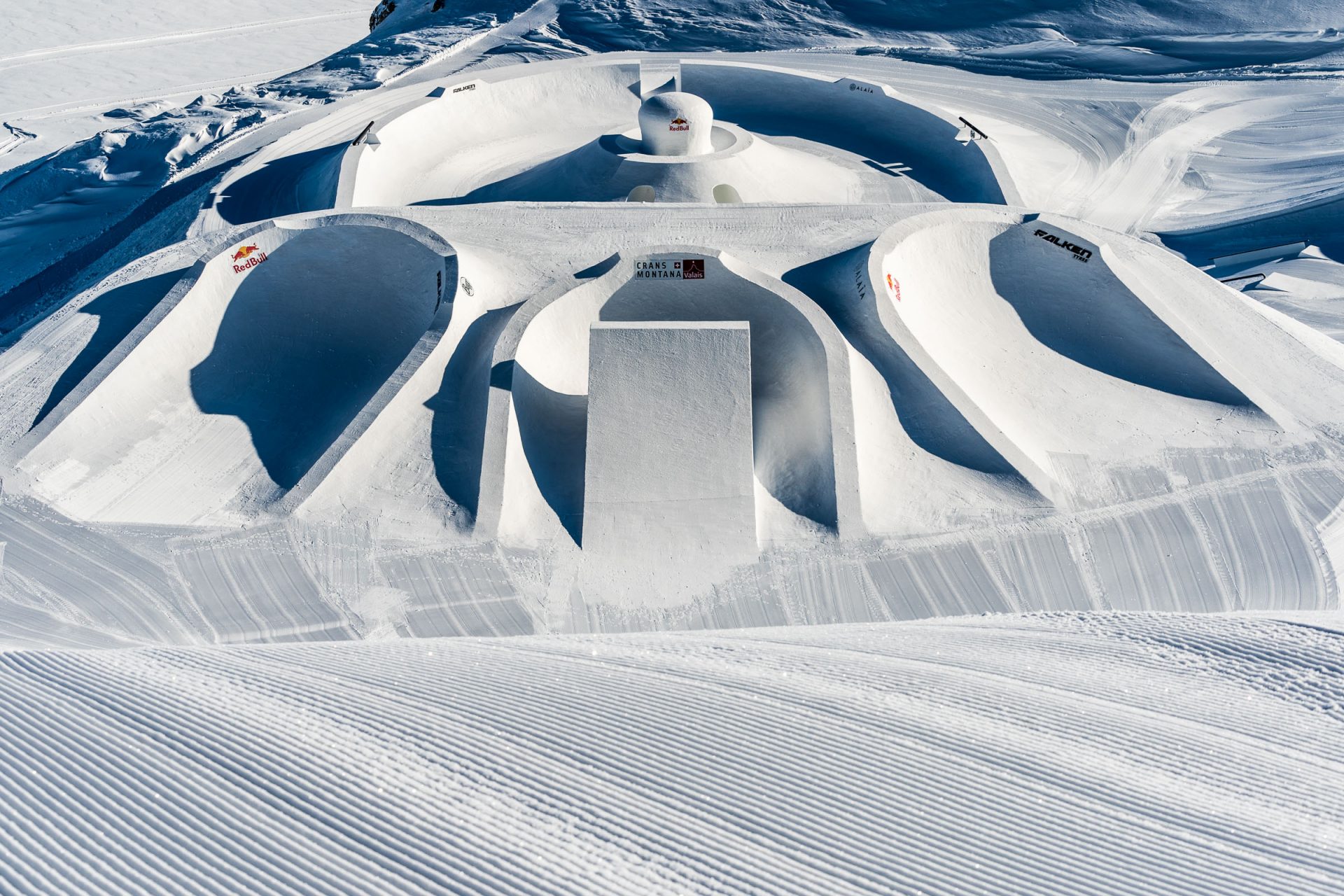 Pass the bowl, yo. Photo: Polzer

Above The Sphere awaits the central feature of the setup—the jump. This booter, 24 meters to the sweet spot, was built with the intention of being “the perfect jump:” lofty, safe and with just the right angles to ensure fun and yes, the P word—progression. After two riding days, the crew has been raving over the dimensions of this kicker. 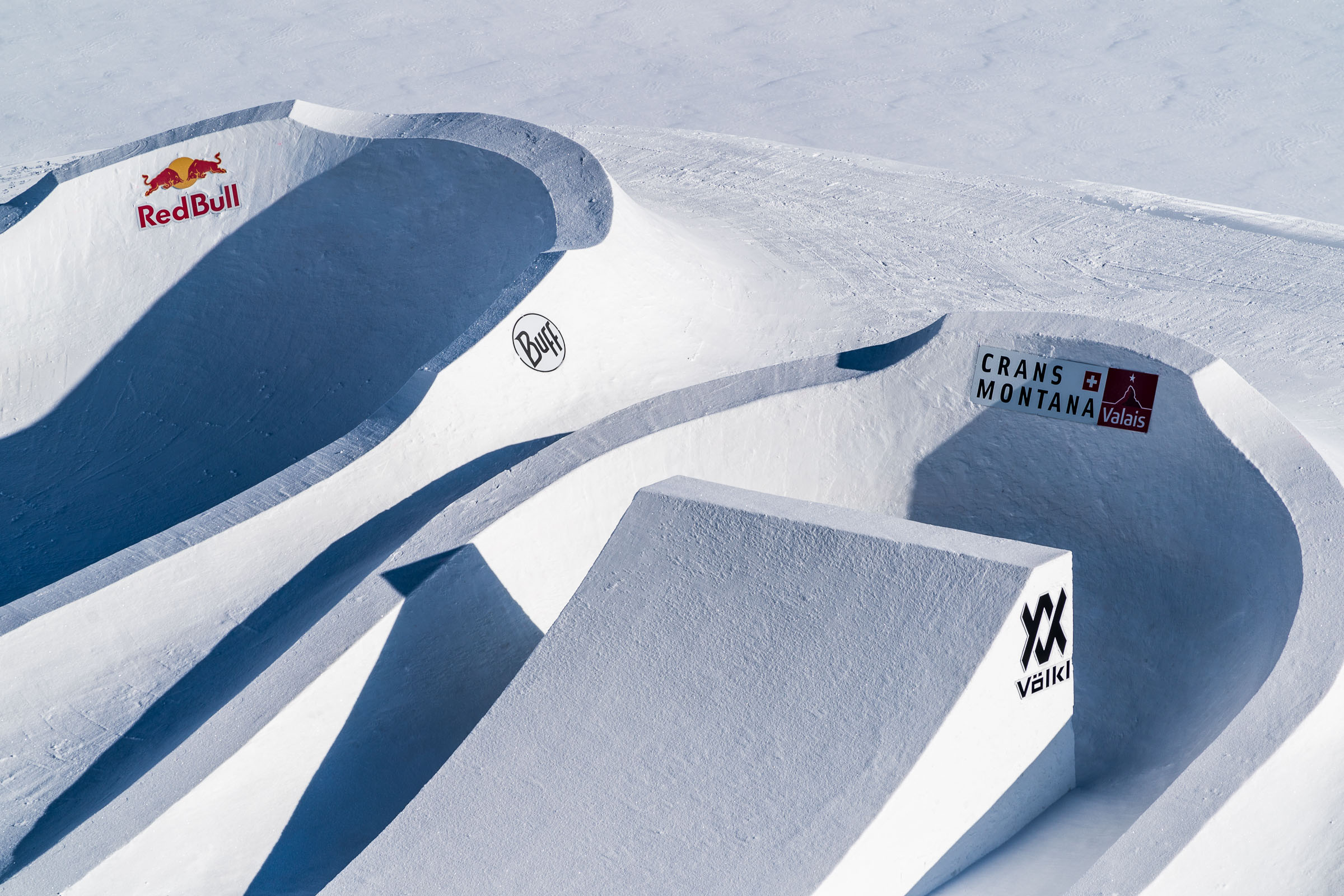 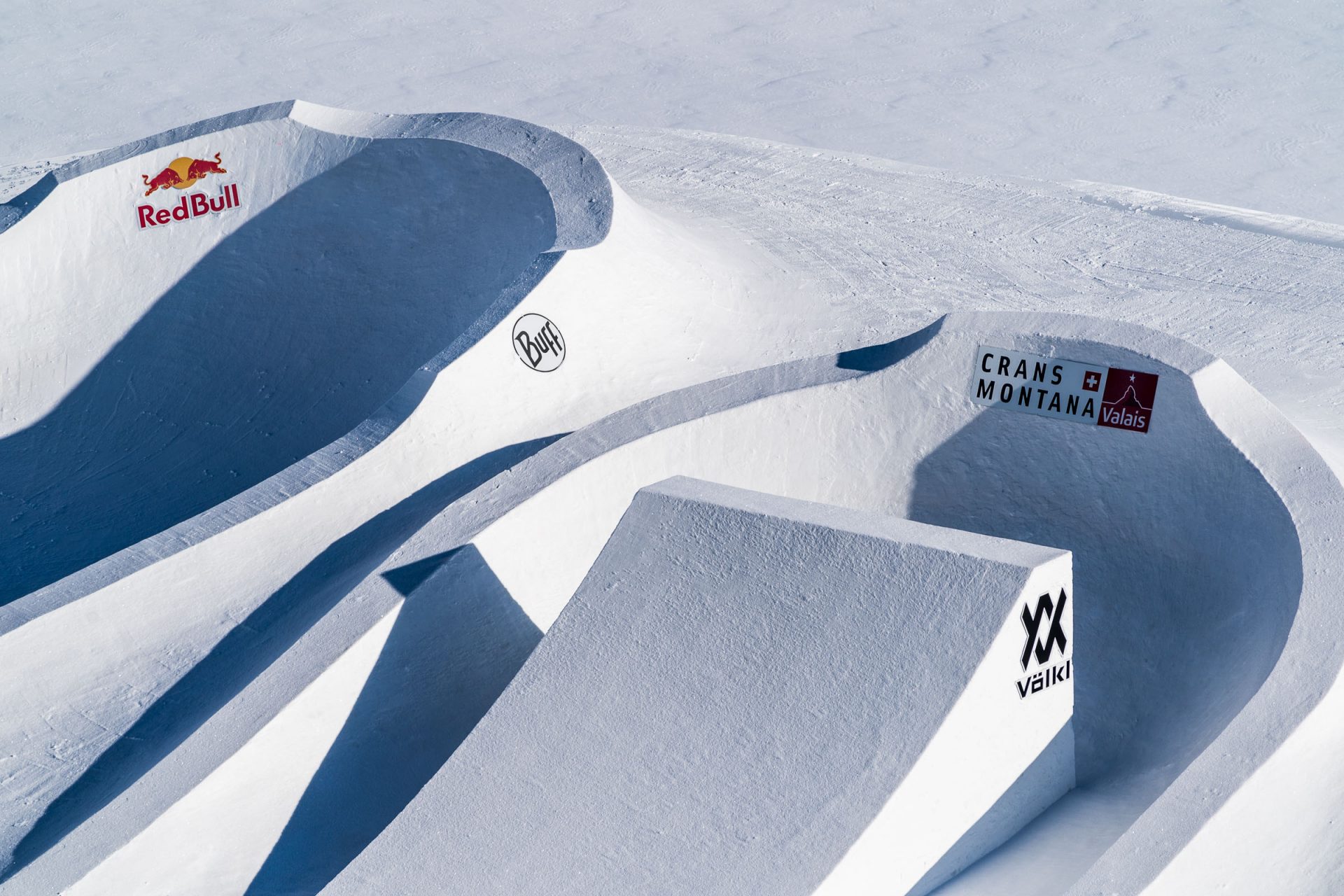 Blurring the line between snowpark design and art. Photo: Polzer

For extra flavor, not to mention plenty of extra riding options, the jump also features three massive bowls. You can come in hot and boost from the bowl into the jump landing. You can carve hard and rip around the bowl like you’re skating a pool. You can jump from bowl to bowl. Every way you look at this thing, there’s a fun transition to be discovered. 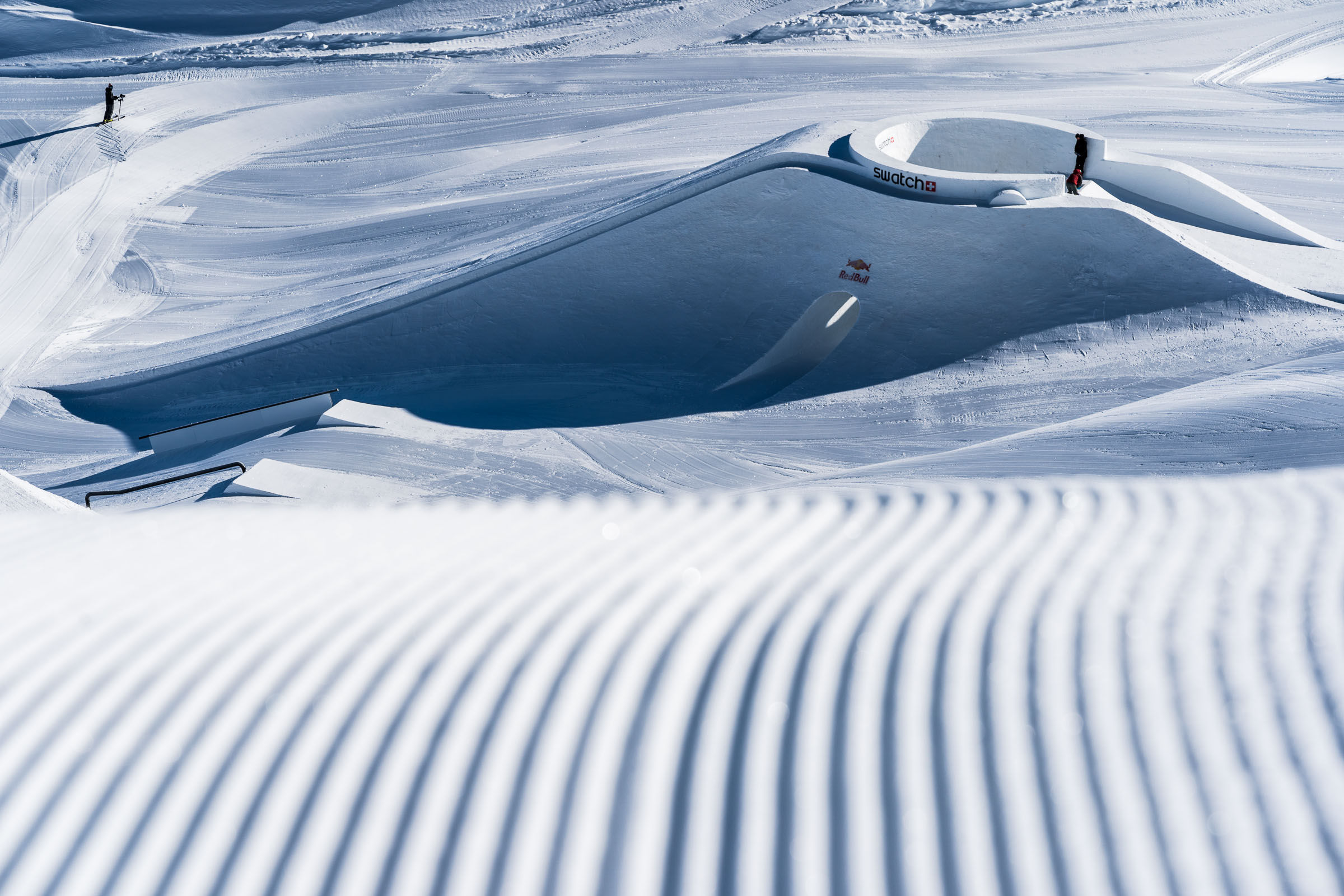 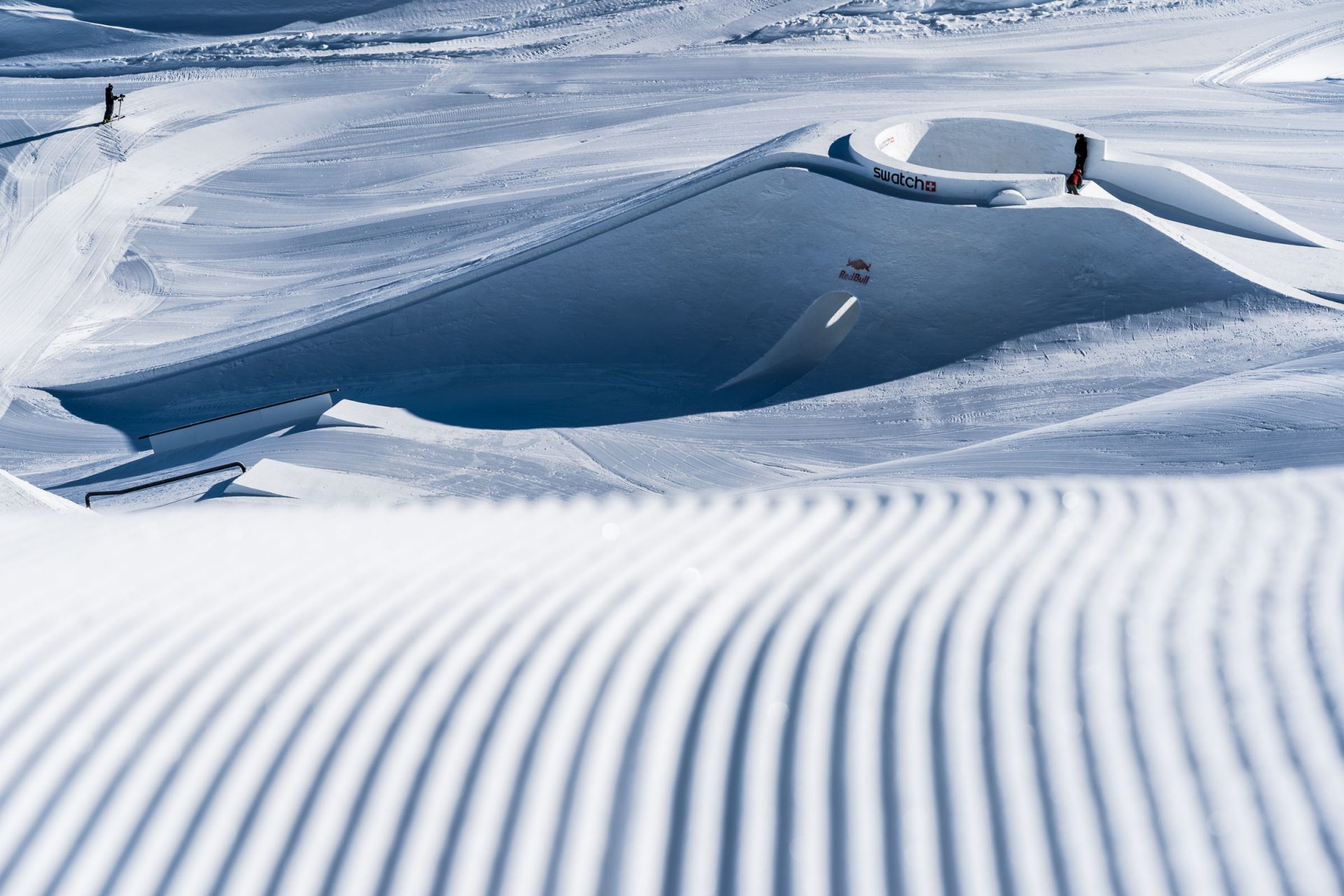 The final feature might not look like much from the outside, but rest assured: this is probably the most innovative and groundbreaking feature to be found in the 2022 Nines setup. Meet the SWATCH Downward Spiral. 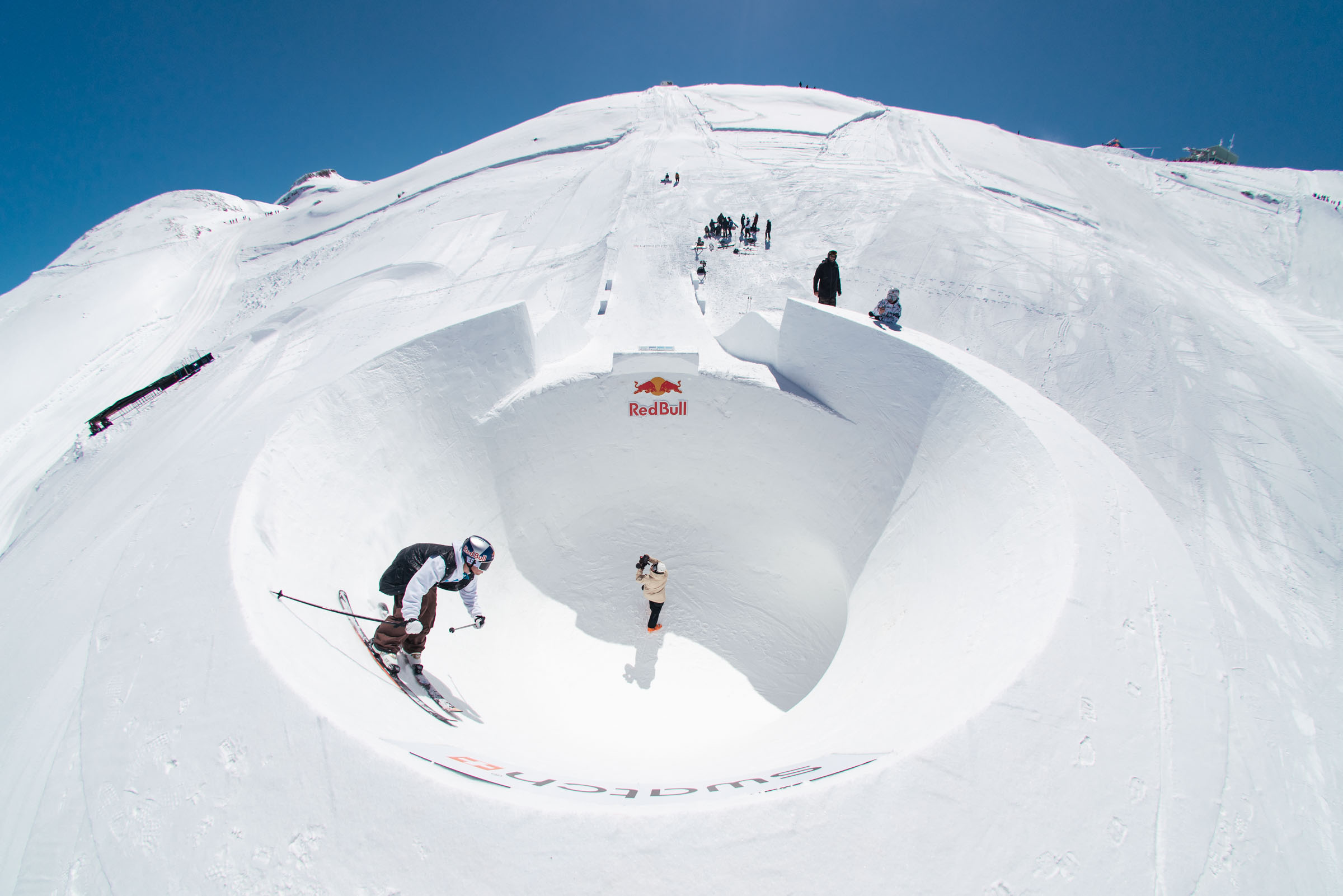 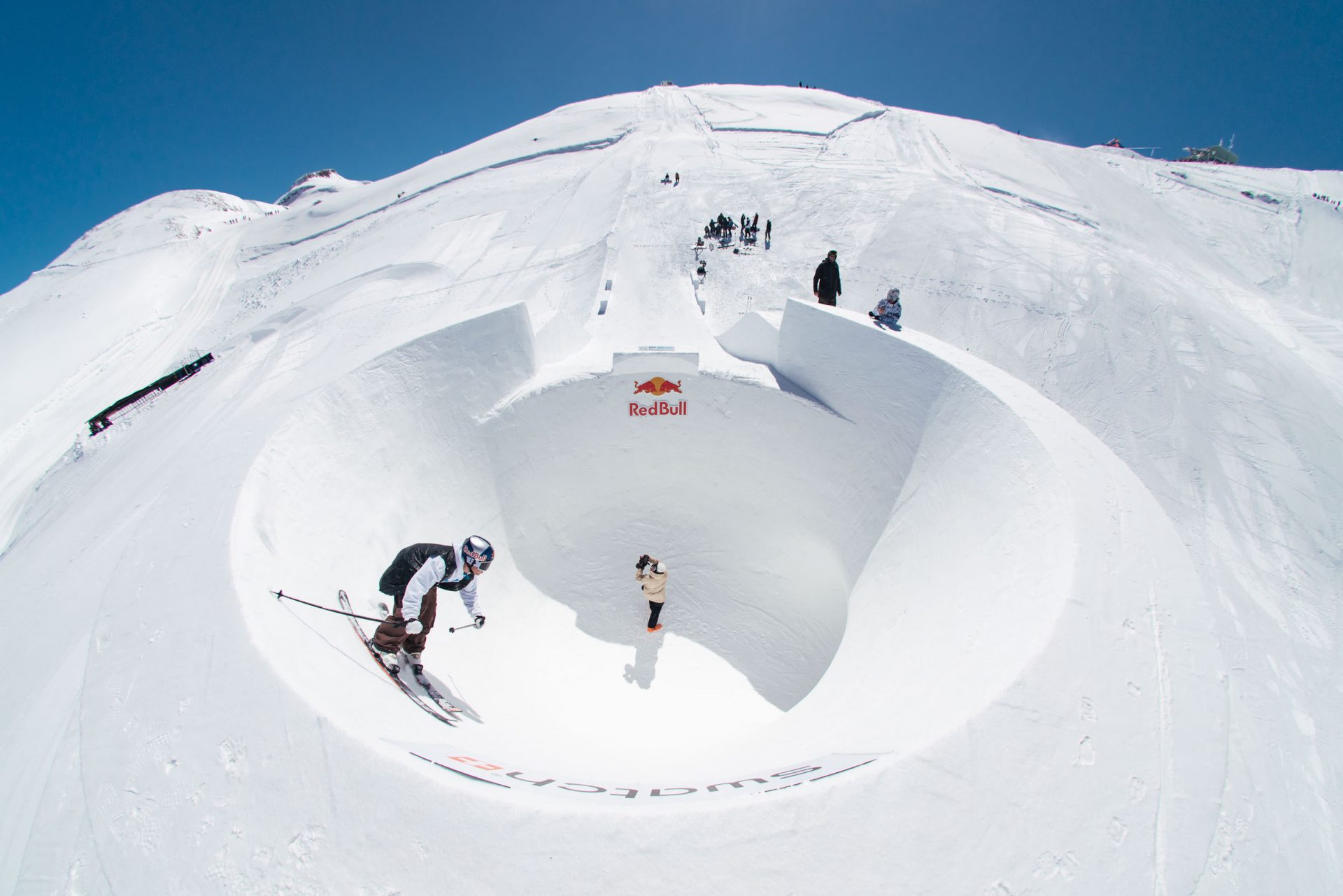 Inspired by a similar feature ridden by Tony Hawk a few years back, the Downward Spiral is a 7-meter-deep circular pit with a tunnel exit at the bottom. The goal: jump inside, ride the wall around a couple of times, and pop out the bottom through the tunnel. For an idea that’s most aptly described as “batshit crazy,” it’s impressive how well this thing actually works. 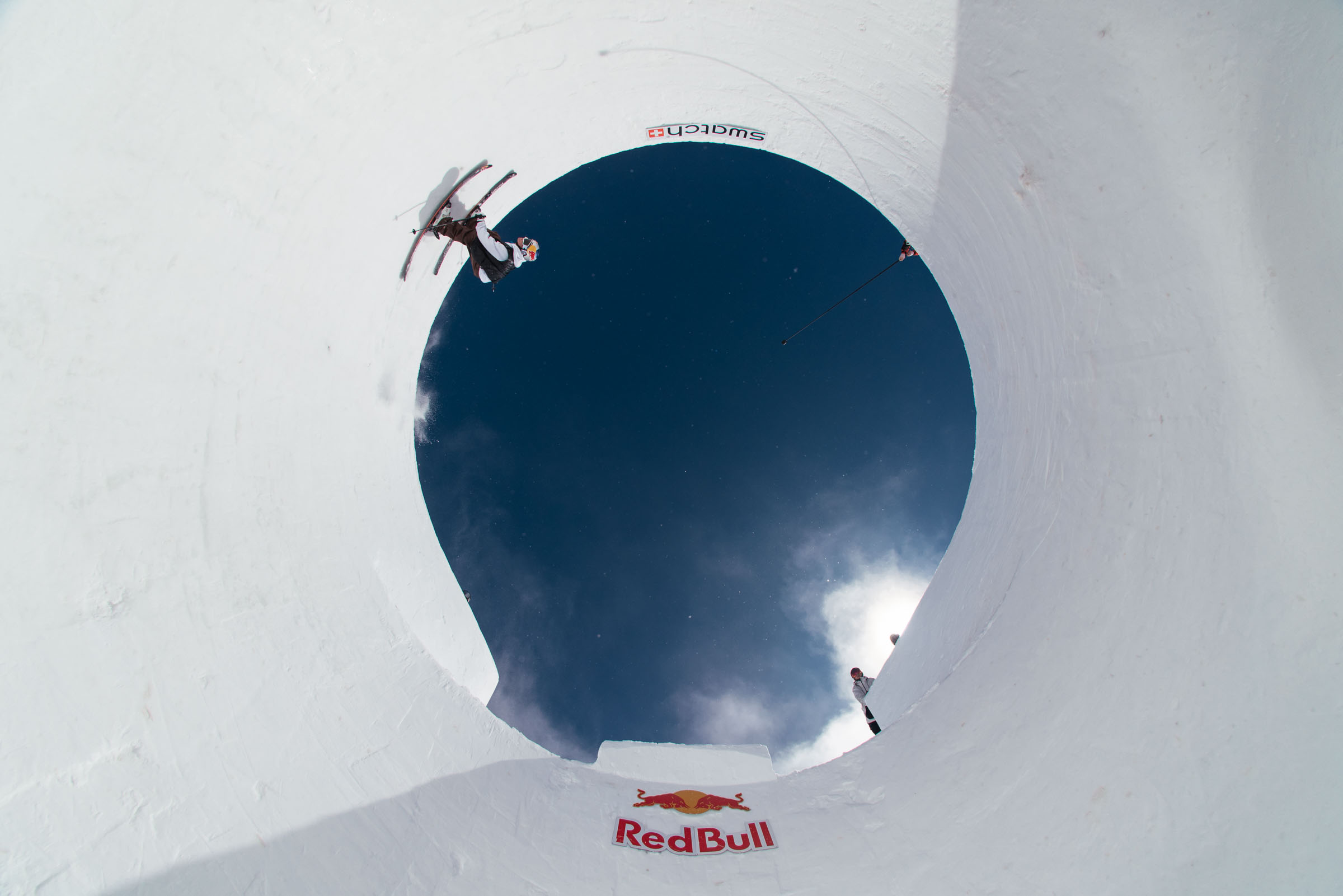 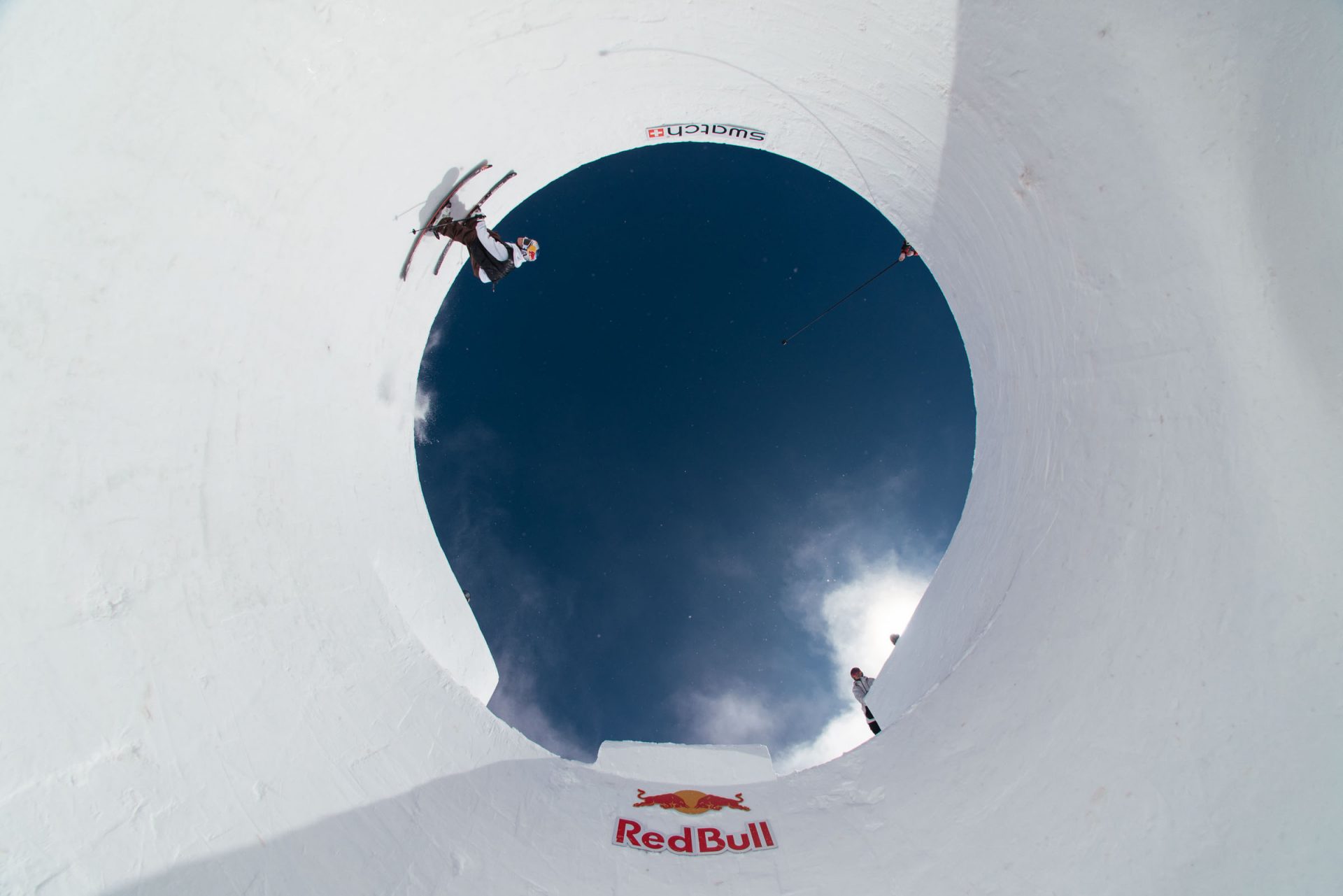 The action’s been pumping on this setup for two straight days now, and there’s still plenty more to come. Keep scrolling for a few highlight photos from the session so far, then take in the GoPro Course Preview for a full run-through of the setup.

We’ll be keeping you updated on the haps at the Nines here at downdays.eu, and on our Instagram and TikTok. And of course, you can always get your info straight from the horse’s mouth at The Nines Instagram and YouTube channel.

Longtime Nines veteran Fabi Bösch has been all over this setup for the past two days. Photo: Theo Acworth 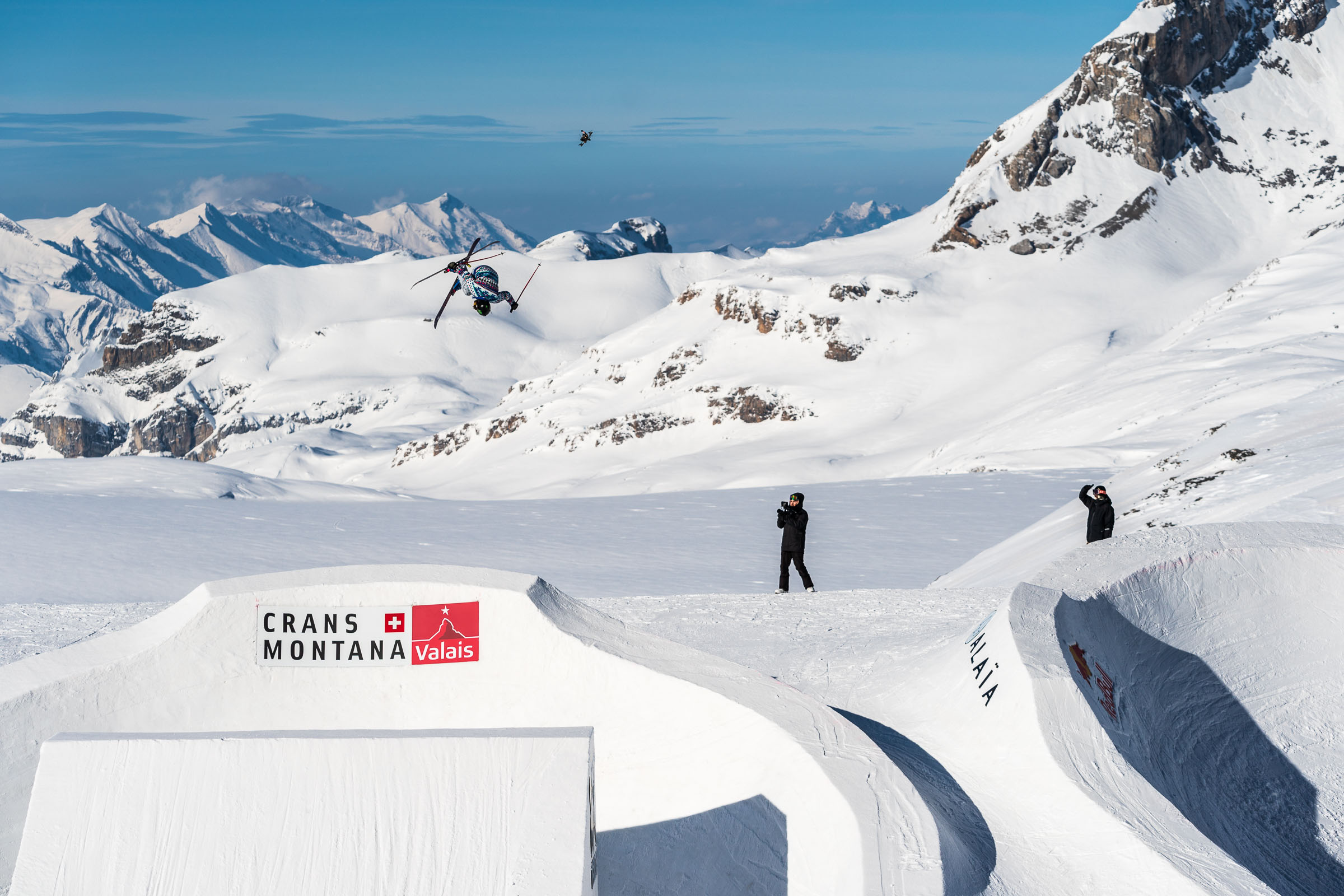 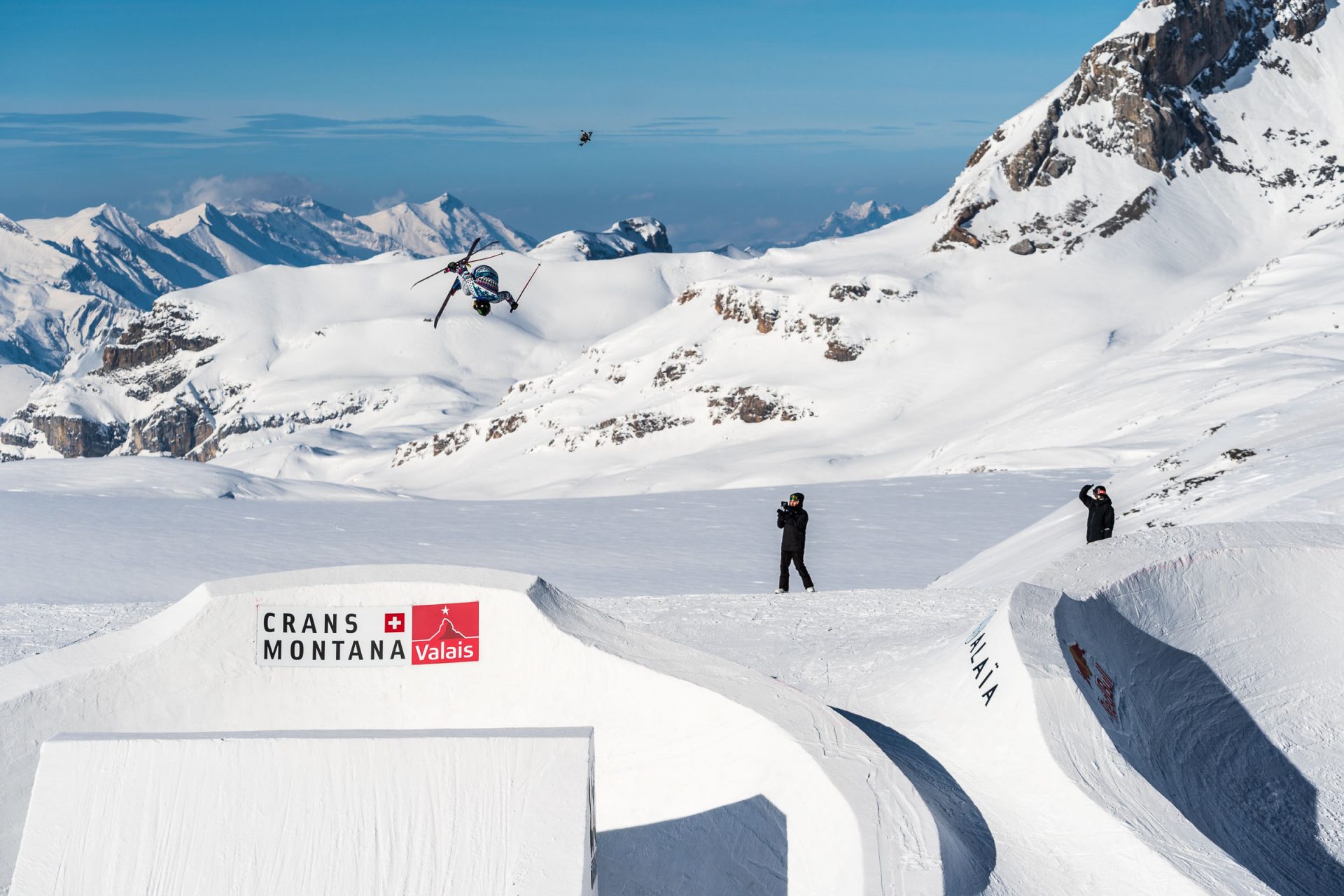 Sarah Hoefflin might have already gotten more laps in than any other rider. Photo: Polzer 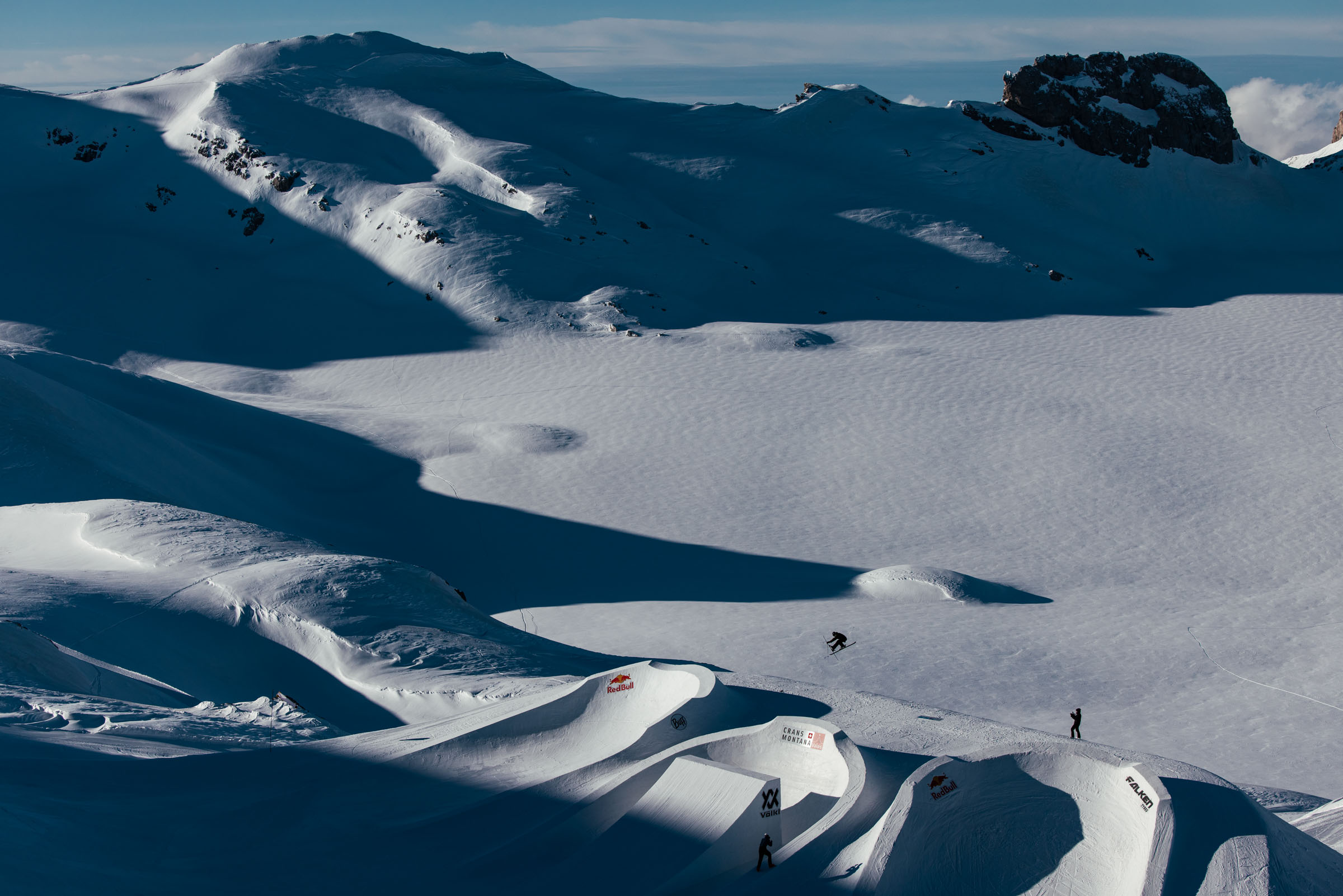 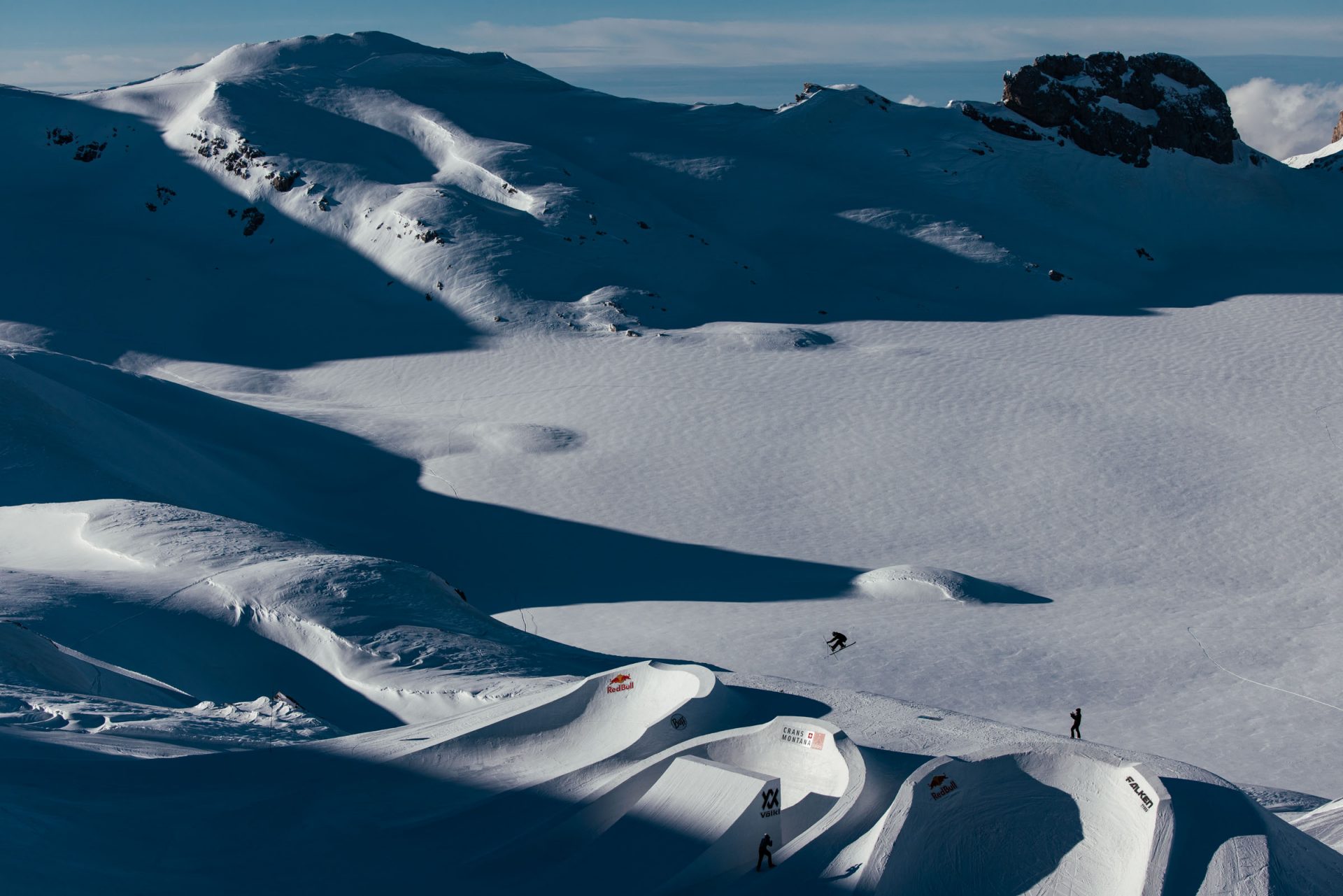 The backdrop of the Plaine Morte glacier above Crans-Montana couldn't be any more scenic. Finn Bilous enjoys the view during yesterday's afternoon session. Photo: Acworth 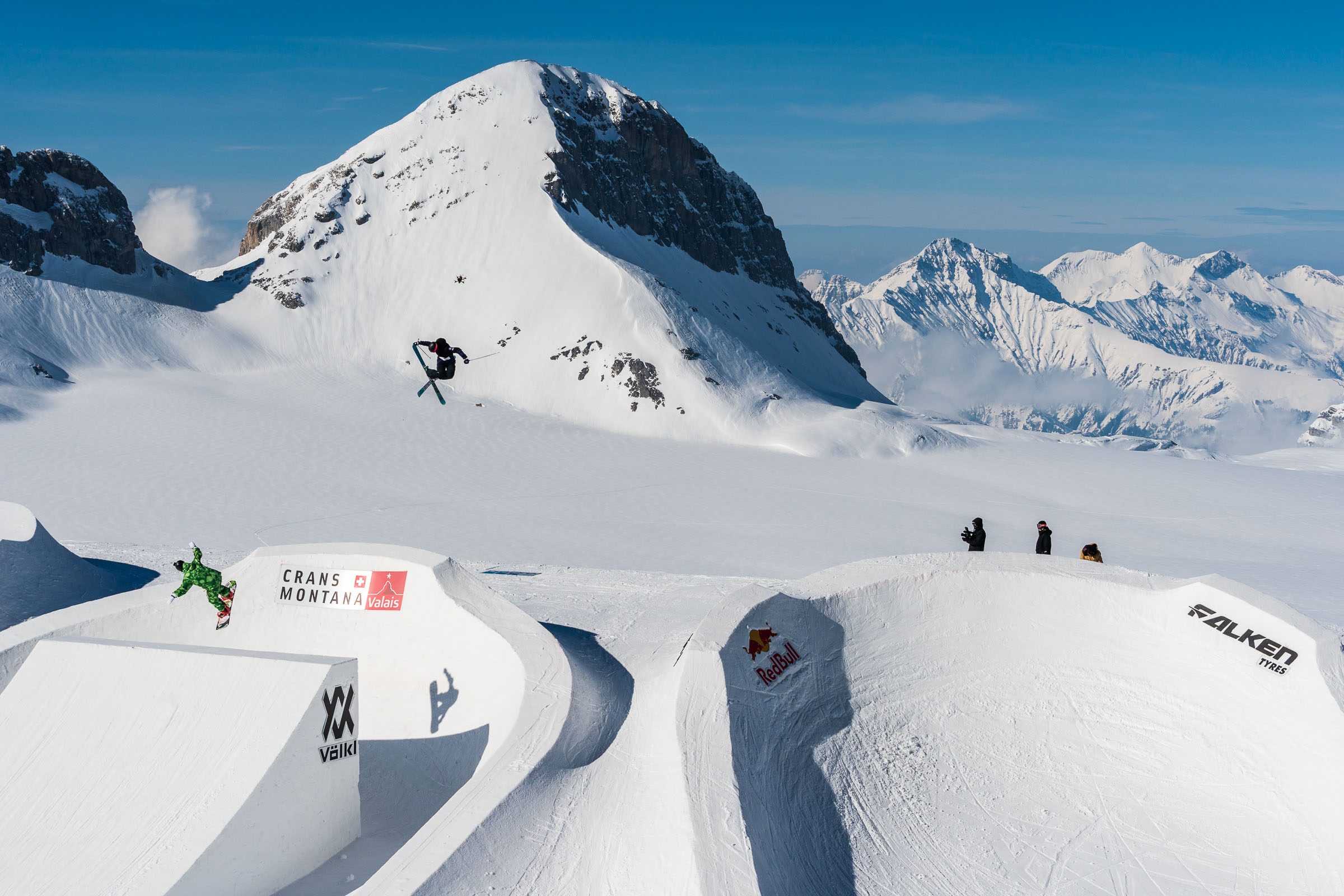 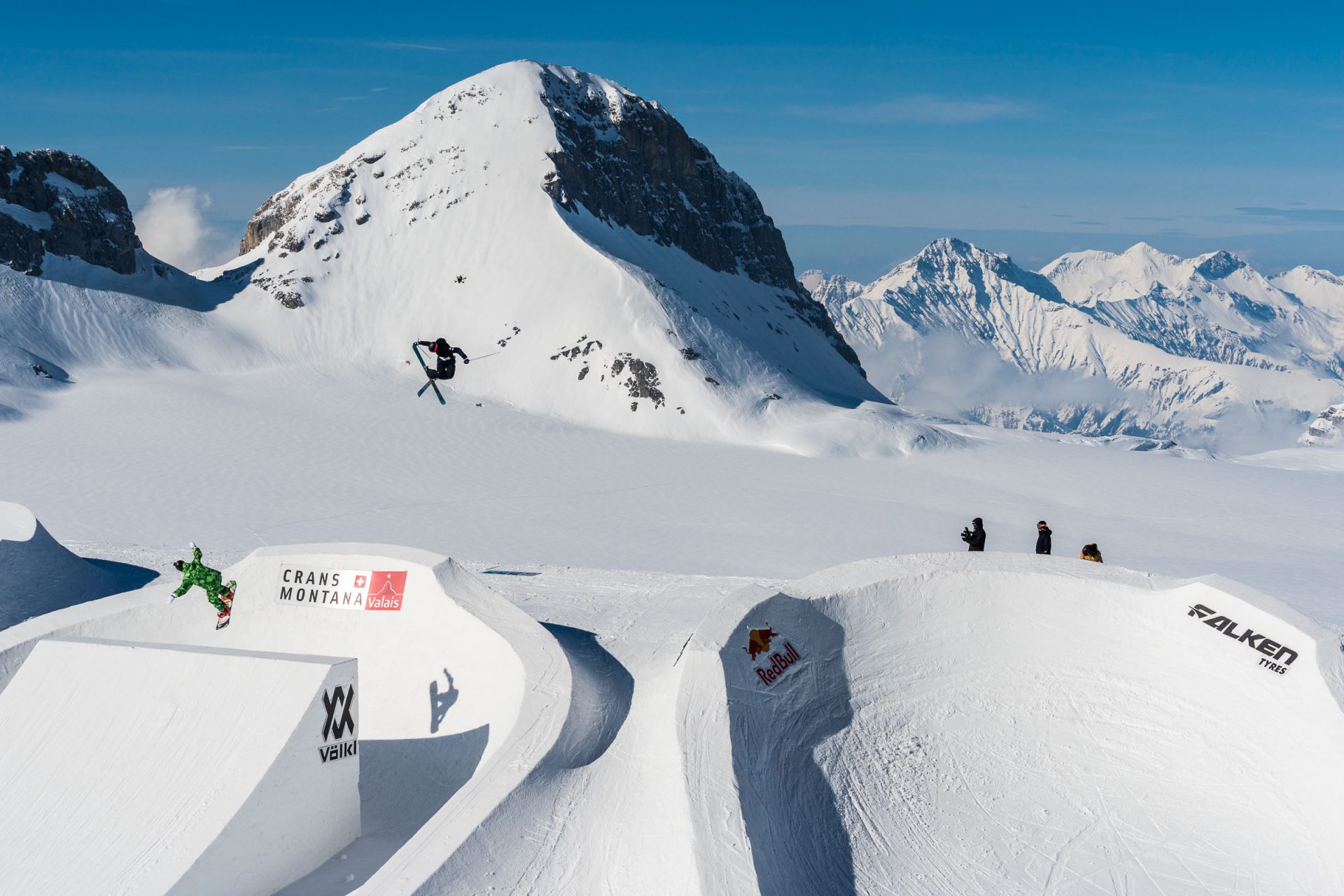 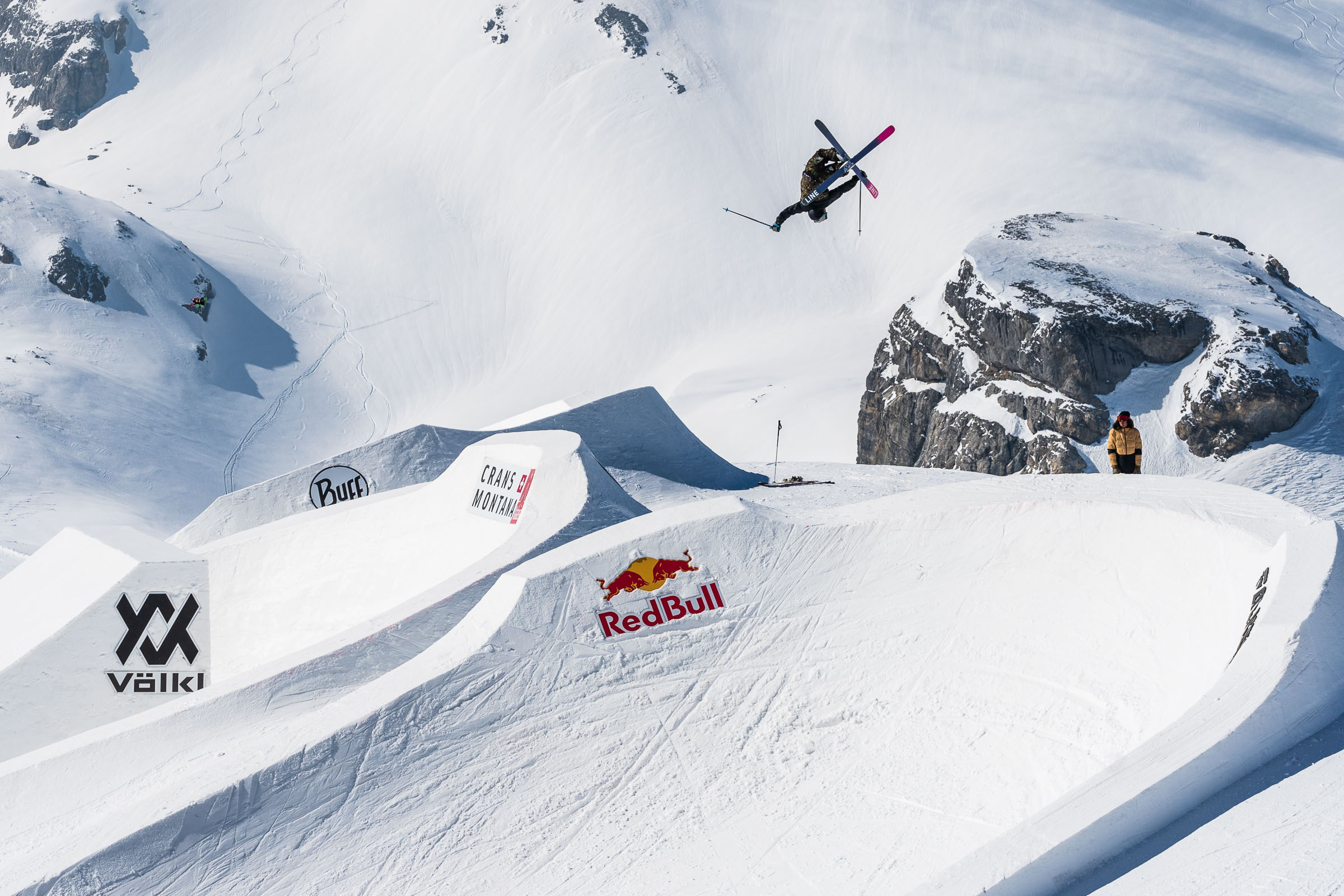 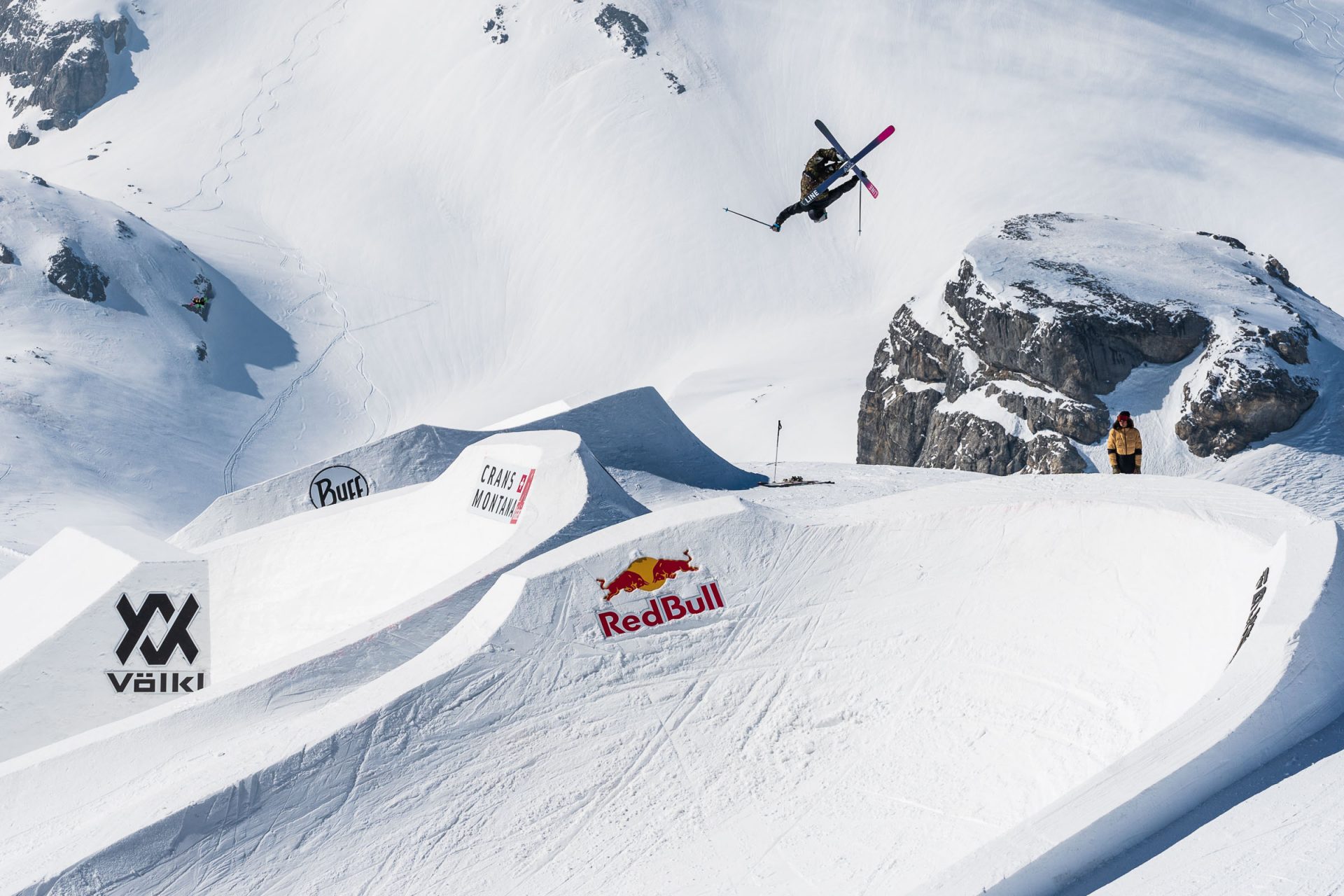 The Nines is just the right venue for a young, hungry sender like Kim Gubser to make his mark. Photo: Polzer 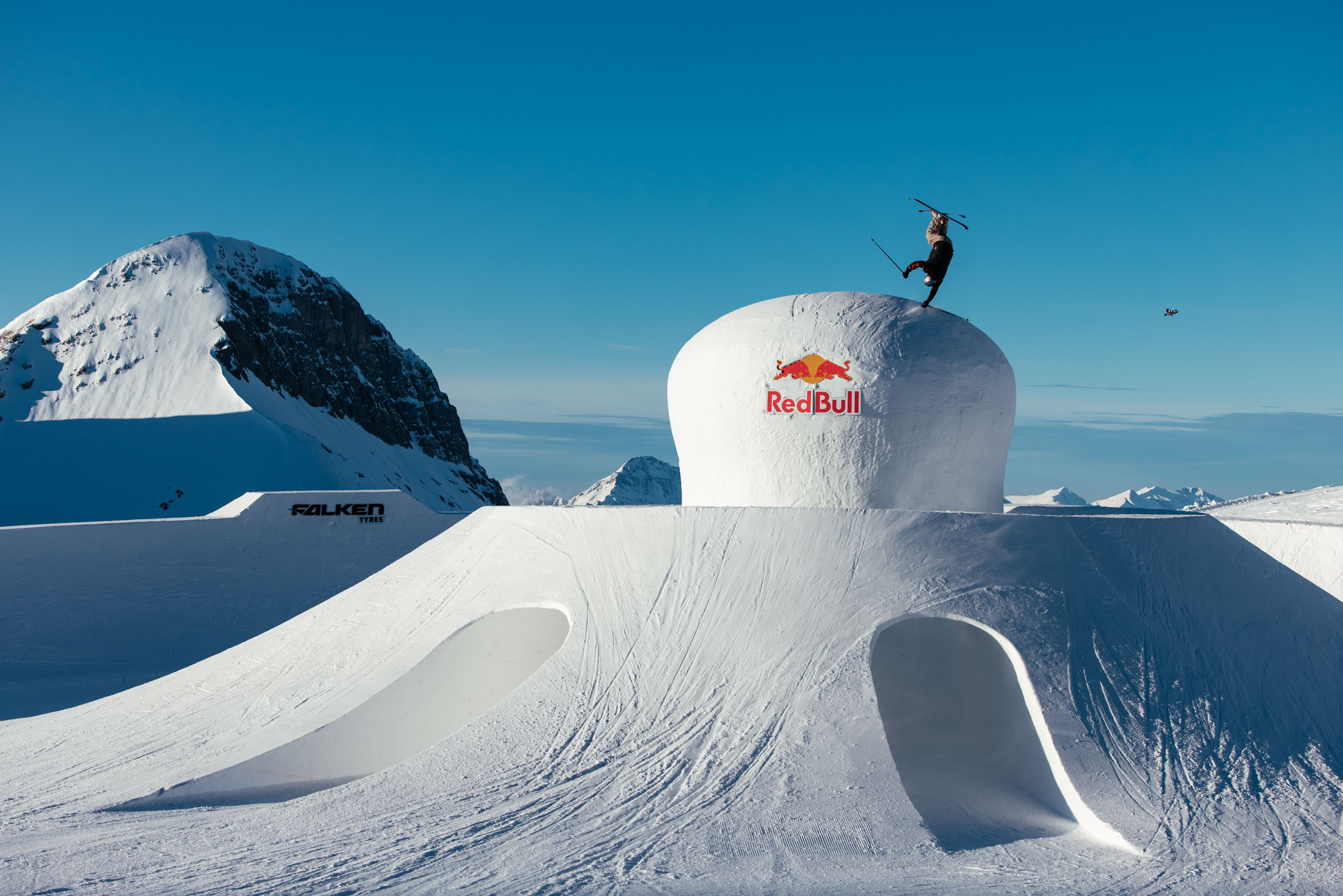 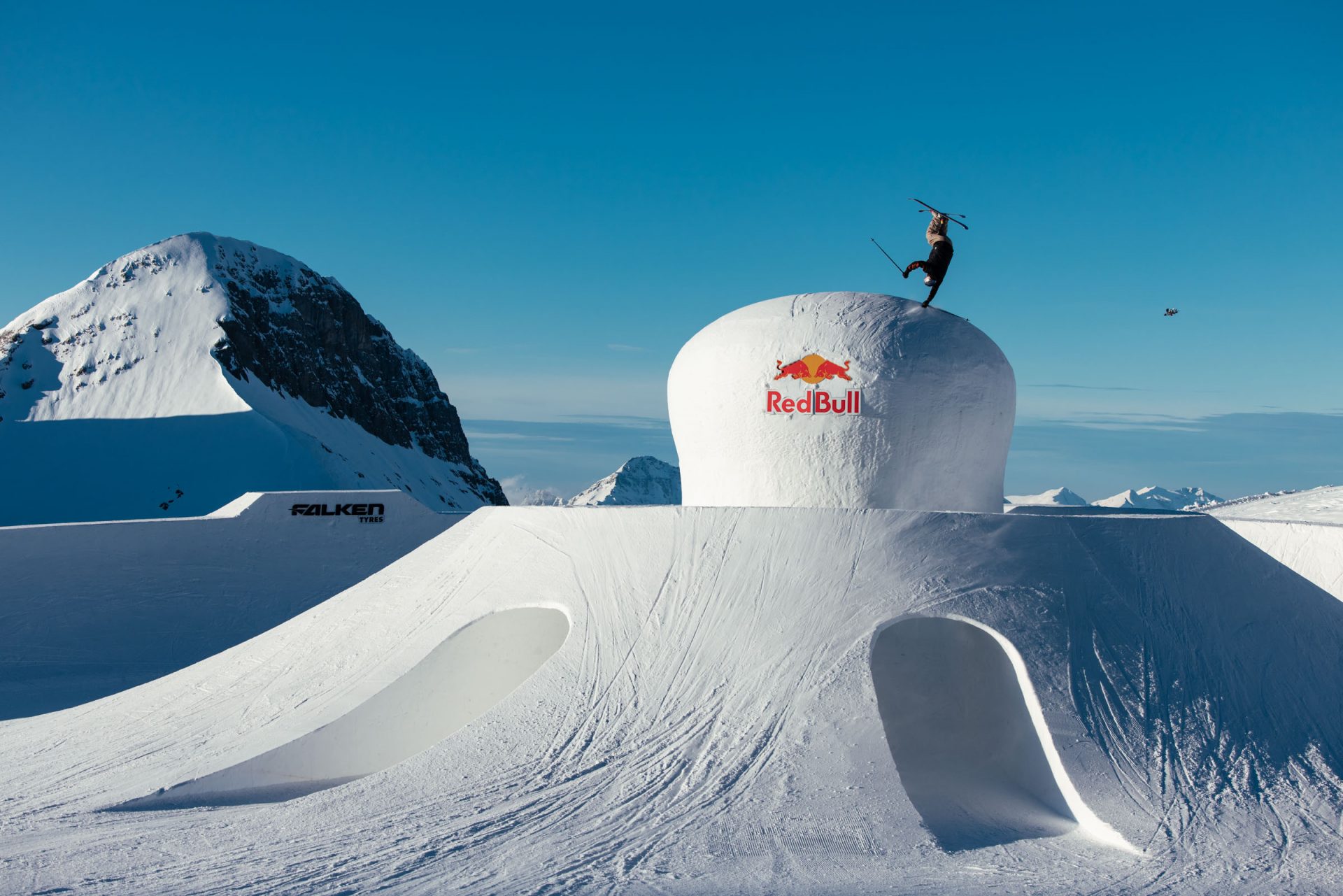 This year's North American contigent has been bolstered by the addition of Mac Forehand, who's been throwing down when he's not busy scratching nipples. Photo: Acworth

Made it this far? Then you’re ready to watch the GoPro Course Preview with Andri Ragettli.