January 17, 2017 – Hakuba, Japan – History was made today on the the snow-stacked terrain of Japan’s premier ski destination, Hakuba, Japan, situated in the Japanese Alps. Fifty-six riders representing the international freeride community descended on the renowned ski town to open a new chapter in the book of freeride as competitors faced off during a 2 stars qualifier and a 4 stars main event.

The hallmark event presented a shining opportunity for the most talented skiers and snowboarders of the international qualifying tour to take advantage of the venue’s abundant snowfall and fantastical freeride terrain. After a week of intense snowfall, the skies briefly cleared enough to provide riders with a chance to compete on the 270 vertical meter venue featuring spines, treed sections, and intricate cliff zones. 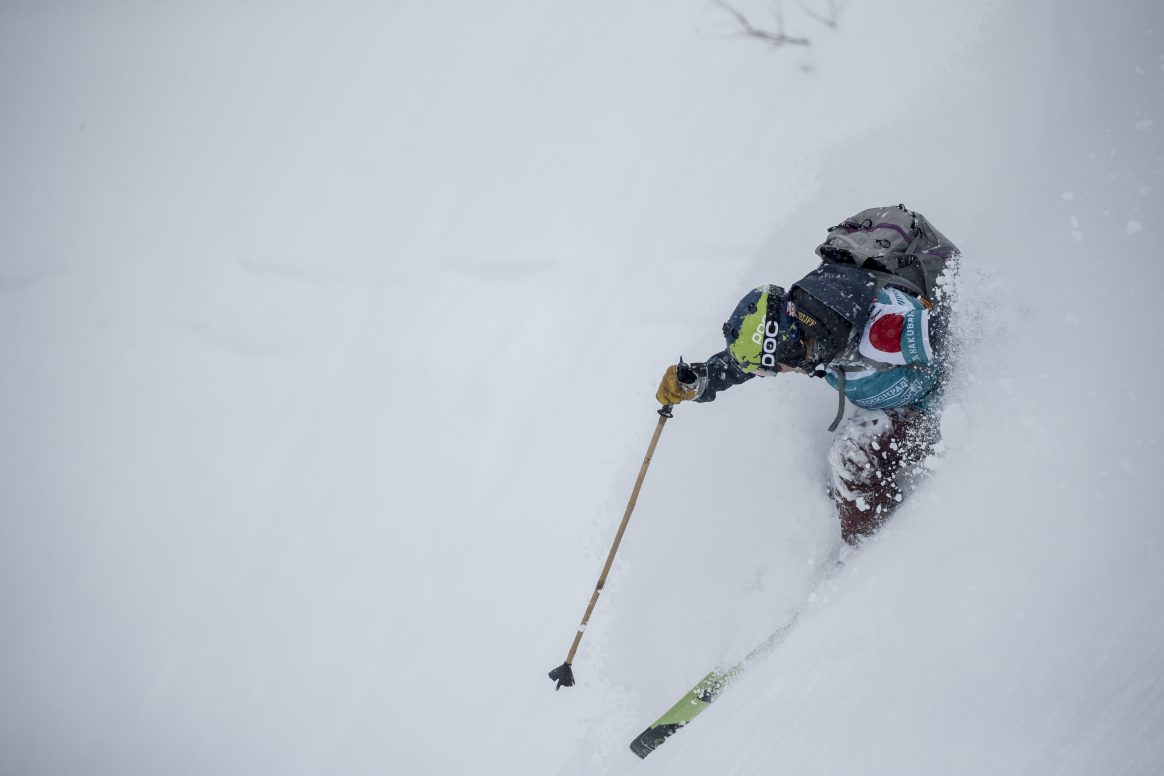 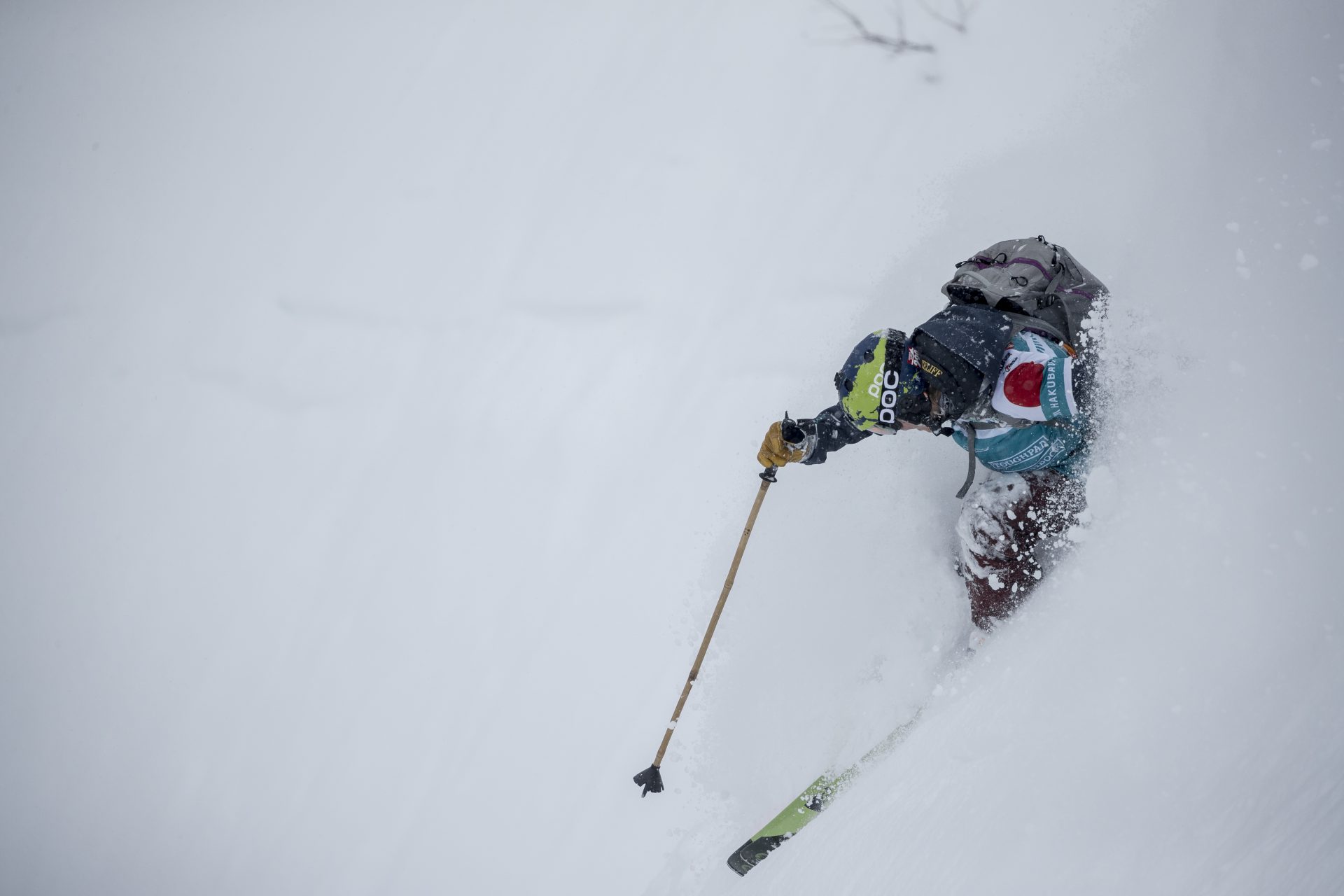 The ski men category opened with lots of firepower as spectators were treated to huge freestyle airs and flips. Not all riders were able to stomp their landings in the deep snow but local talent Taisuke Kusunoki (JPN) held it together with a powerful run that terminated with a stomped backflip, earning him first place and a wild card on the elite 2017 Swatch Freeride World Tour. He was followed in second place by a strong run from Loic Burri (SUI) who also landed a clean backflip. Kristofer Turdell (SWE) nudged Ivan Malakhov (RUS) off the podium to earn third place with a solidly stomped backflip. 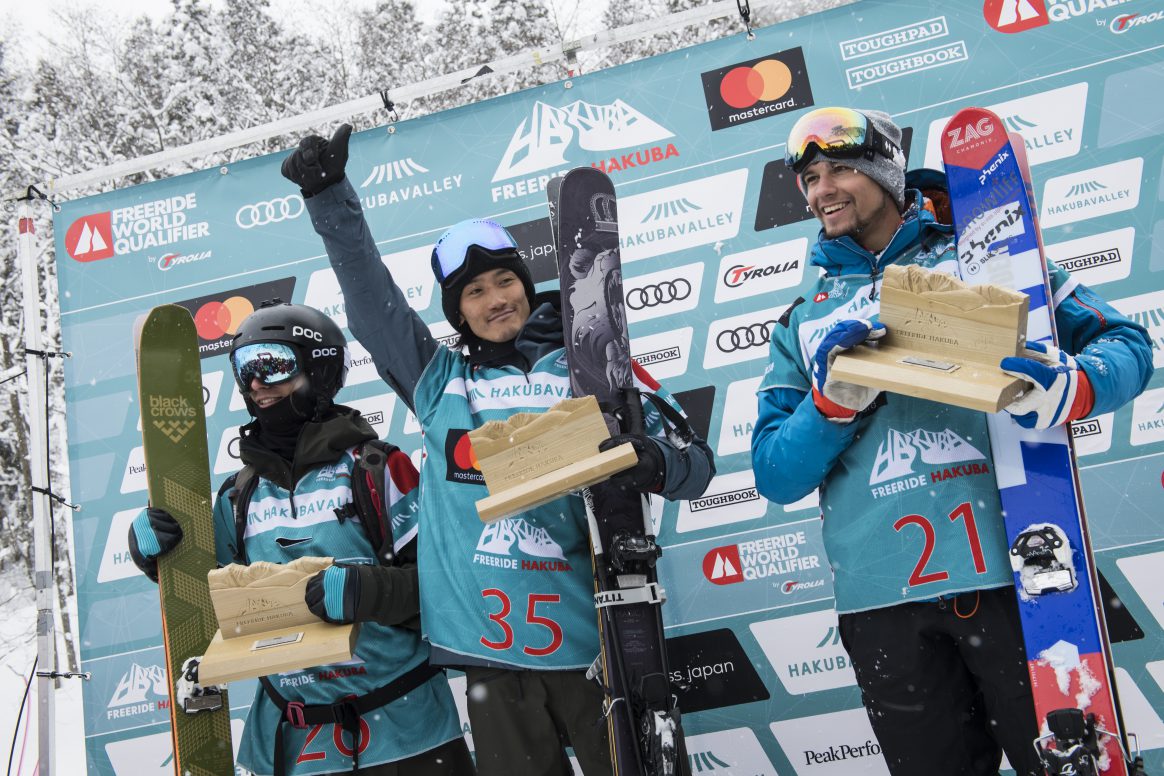 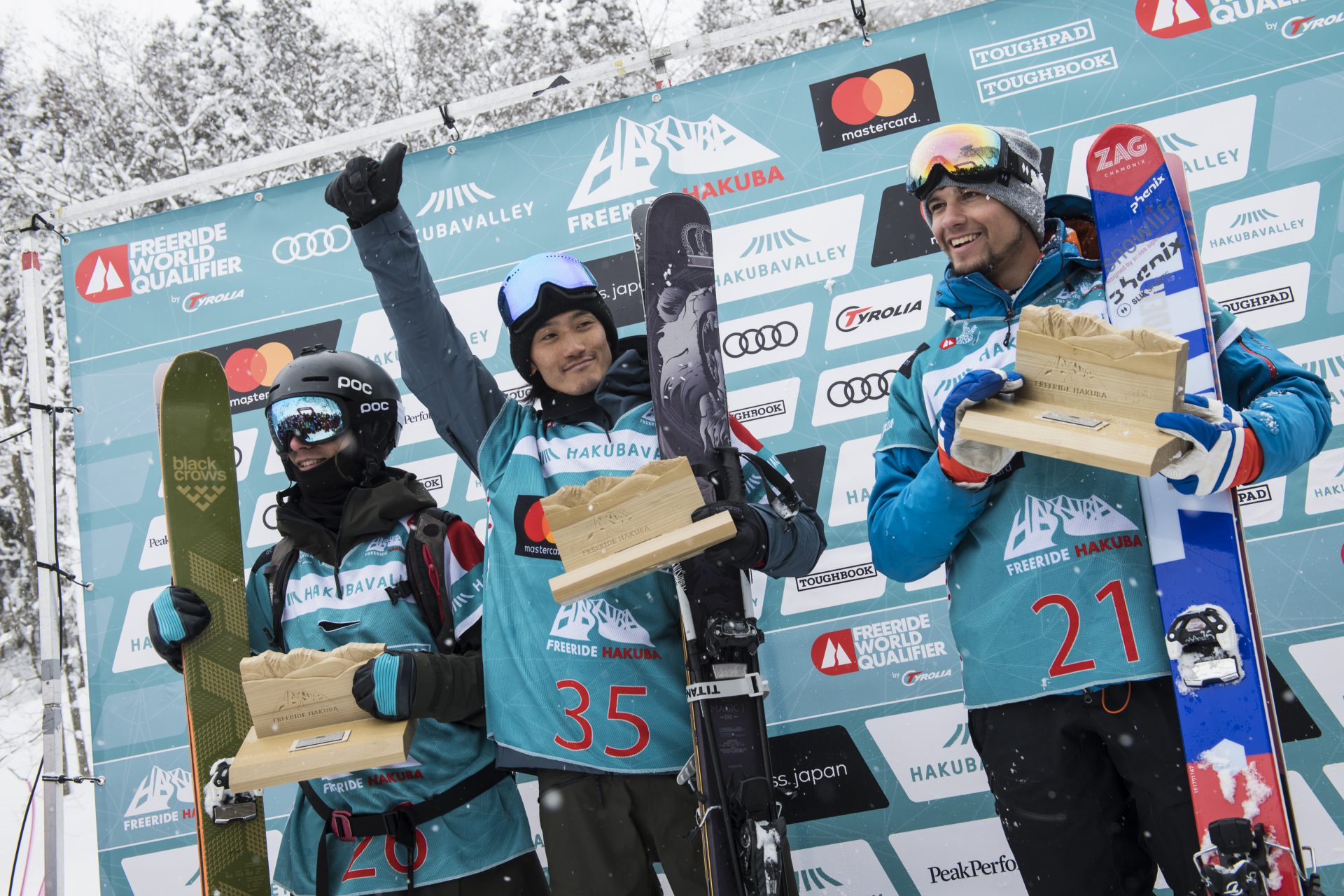 Increasingly intense snow showers obscured the sun yet Elisabeth Gerritzen’s (SUI) motivation and training paid off today as she impressed fans with a hard-charging line from start to finish, earning her first place. As riders got into their rhythm, Caite Zeliff (USA) powered through the spines and stomped a shifty in the middle of the venue. Veteran FWT athlete Jaclyn Paaso (USA) unleashed her signature hard charging but couldn’t maintain enough technical perfection to finish at the top of the podium. 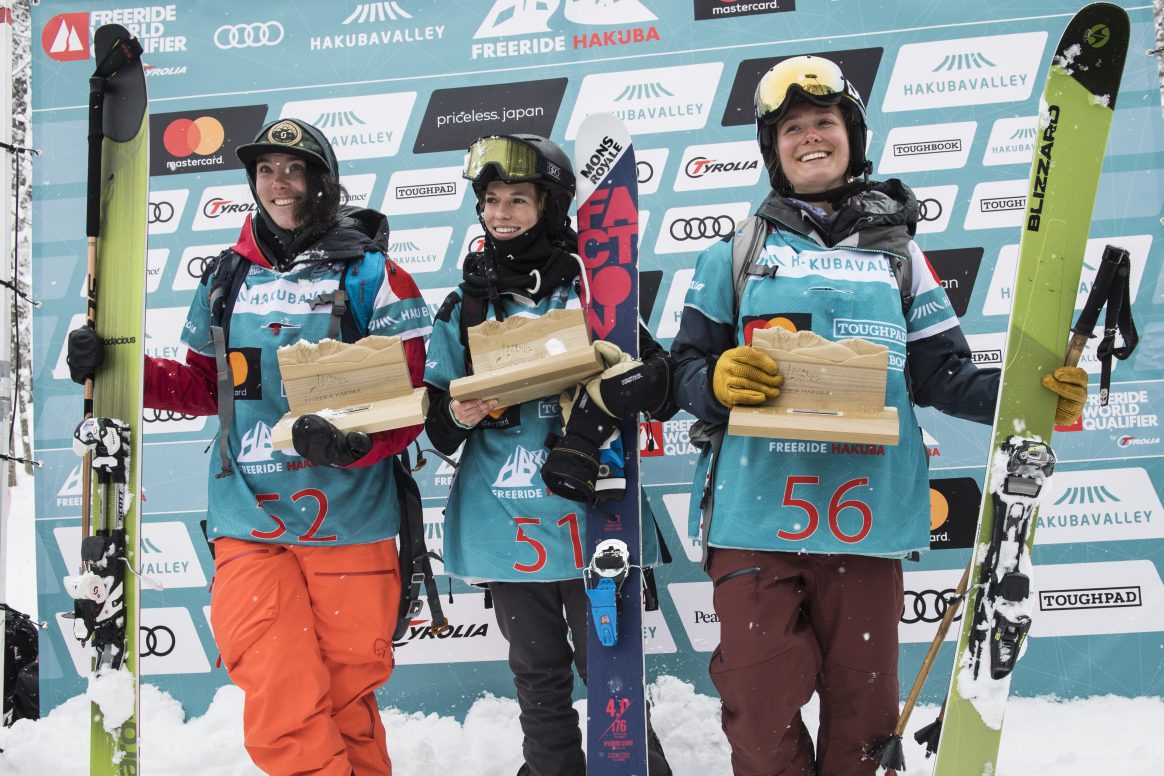 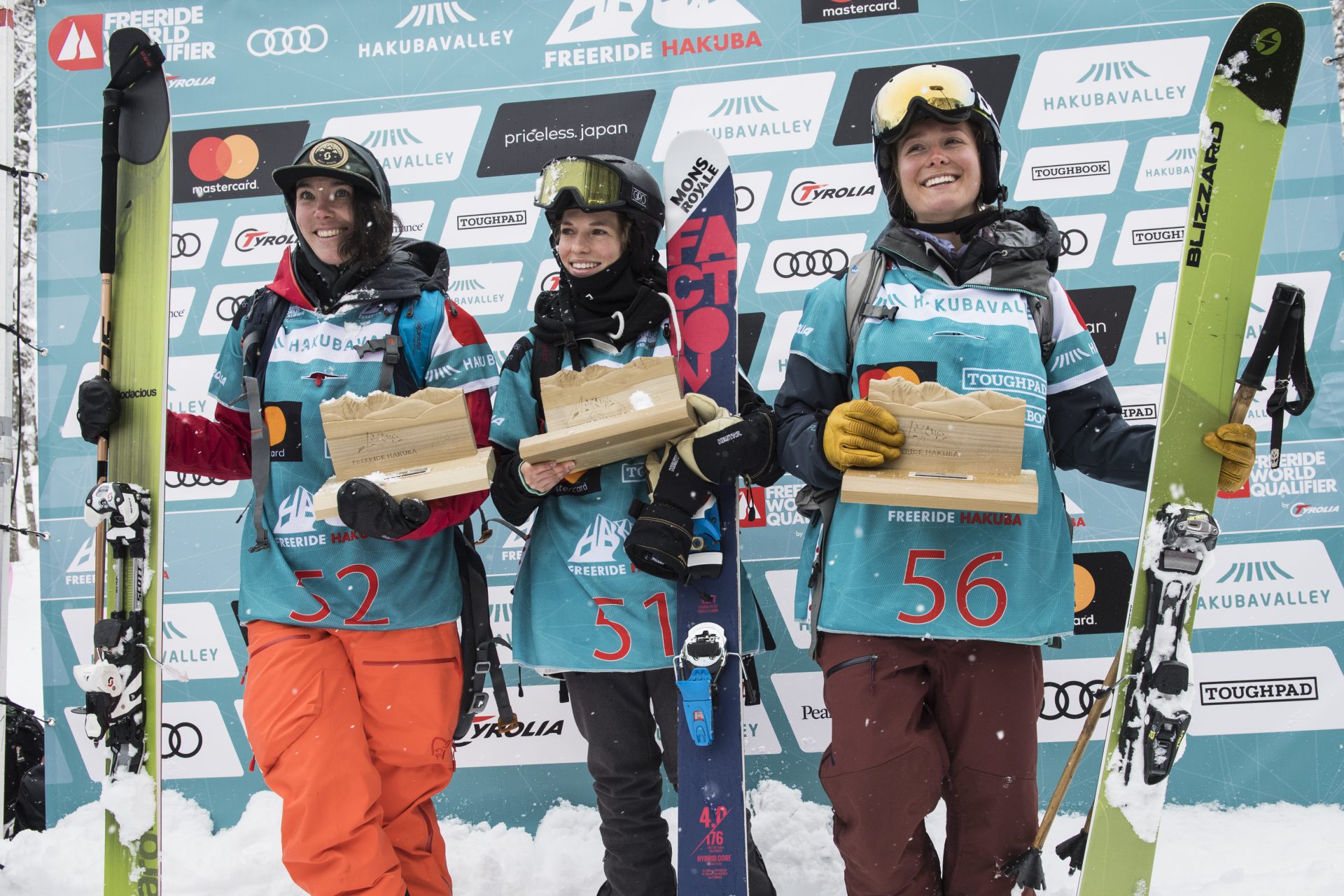 As the historical epicenter of Japanese freeride culture, riders and spectators were treated to the unique Japanese ambience and hospitality of the region that hosted the 1998 Winter Olympic Games. Freeride is gaining traction among the Asian snowsports community as evidenced by the recent rapid growth of interest in the sport. The success of this inaugural competition has paved the way to the possibility of the expansion of FWQ, FWT, and Junior events in the area.

With the FWQ season now in full-swing, follow the competition circuit as hundreds of promising freeriders from around the world vie for the few coveted qualification spots on the elite Swatch Freeride World Tour. The most up-to-date competition info, rankings, and rider news can be found on freerideworldtour.com and the FWT/FWQ Facebook pages.