Rumble in the Rockies: Hotter, Turdell on top at Kicking Horse FWT

Rumble in the Rockies: Hotter, Turdell on top at Kicking Horse FWT

If you’re a fan of deep powder, steep lines, massive cliffs, backflips, spins and crashes, the 2020 Freeride World Tour stop at Kicking Horse, Canada certainly delivered. The ski women came out first strong and in control, dialing in their lines with speed, technique, control and style. The men on the other hand had a hard time putting everything together, as more than half the field had some kind of crash during their runs.

It was a cold, crisp Friday morning (we think it was on Friday, but we’re not sure when FWT competitions actually occur anymore), and the snow was deep and soft. Though some of the take-offs were a bit sharky, conditions were otherwise prime for a freeride competition. The Ozone face—a familiar venue for FWT veterans—was  in fine form. Since its induction into the Tour, it’s been the site of many legendary moments, from Logan Pehota’s 98.00 score to Markus Eder, Craig Murray, and Tanner Hall’s moon-sized senders in 2019. This year was no exception, with several high moments and just as many lows.

After the snowboard women, ski women ran early in the day, giving them a mostly fresh face to rip. Last season’s Kicking Horse winner Jacqueline Pollard kicked off the show, linking four clean cliff features as she sliced through the Canadian powder. “That was sick snow!” she screamed as she came in to the finish corral.

Jessica Hotter followed up from Start 2, taking a cliff from the traverse area into a mid-hill standalone feature called The Nugget and finishing her run by skiing off a huge technical cliff with no hesitation. The fluid run and sizable hits earned the Kiwi skier first position at 88.33. 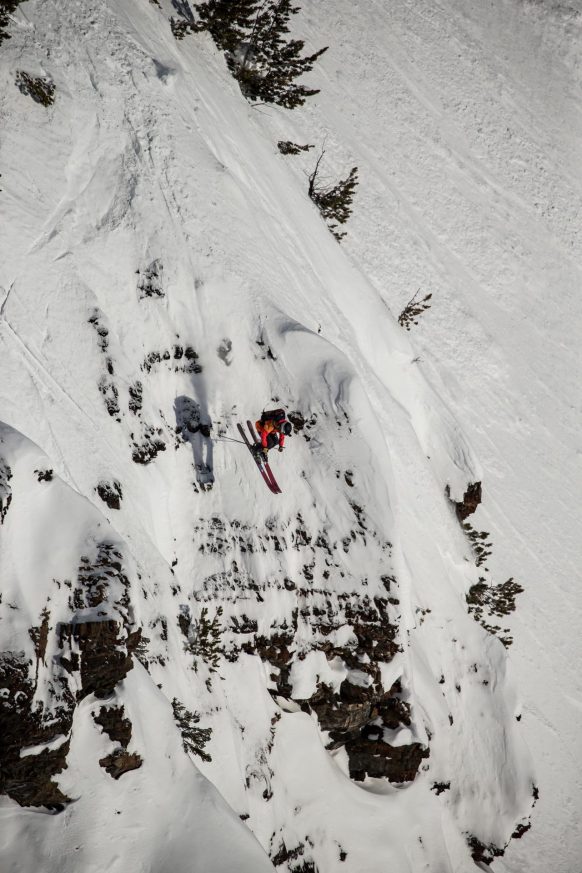 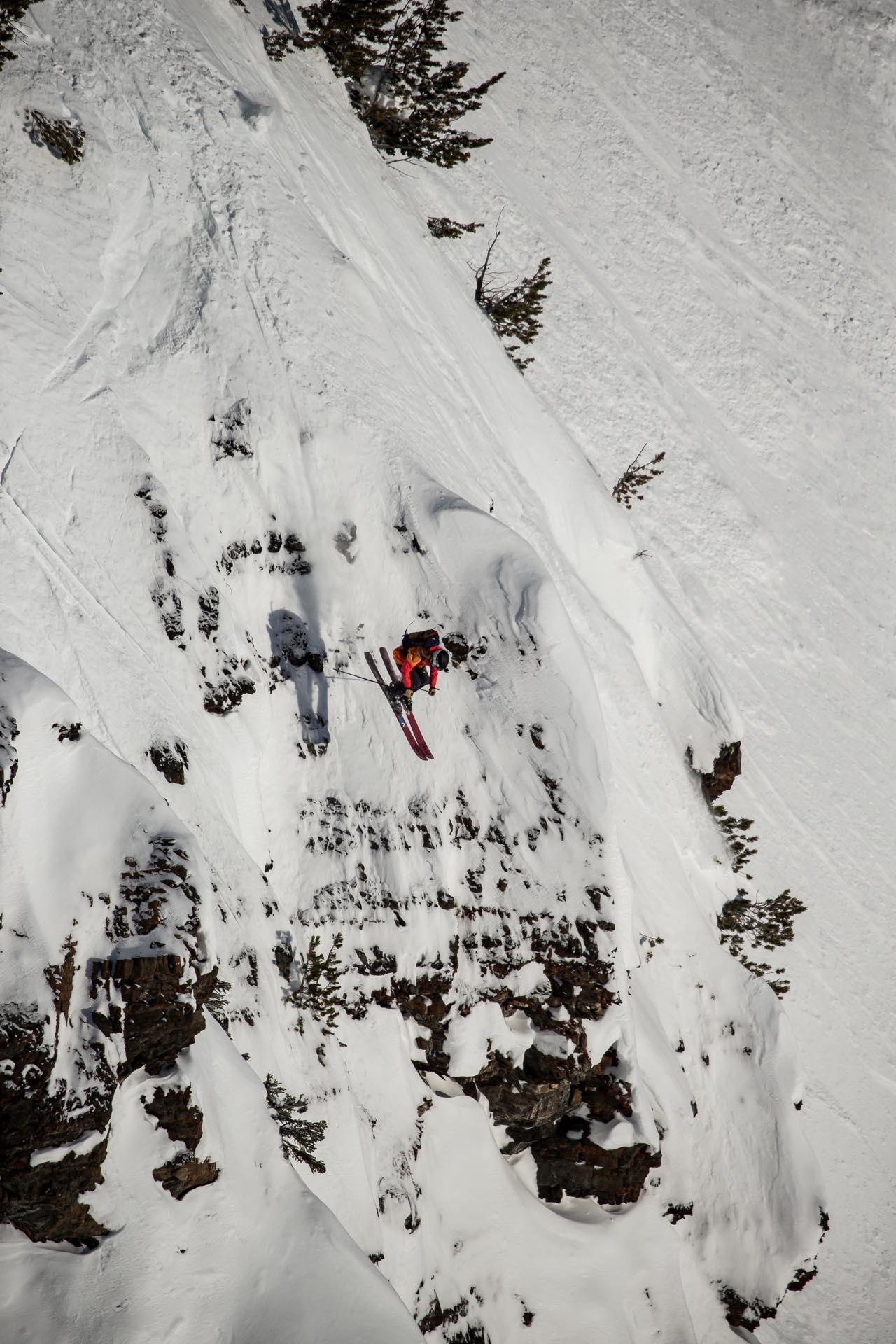 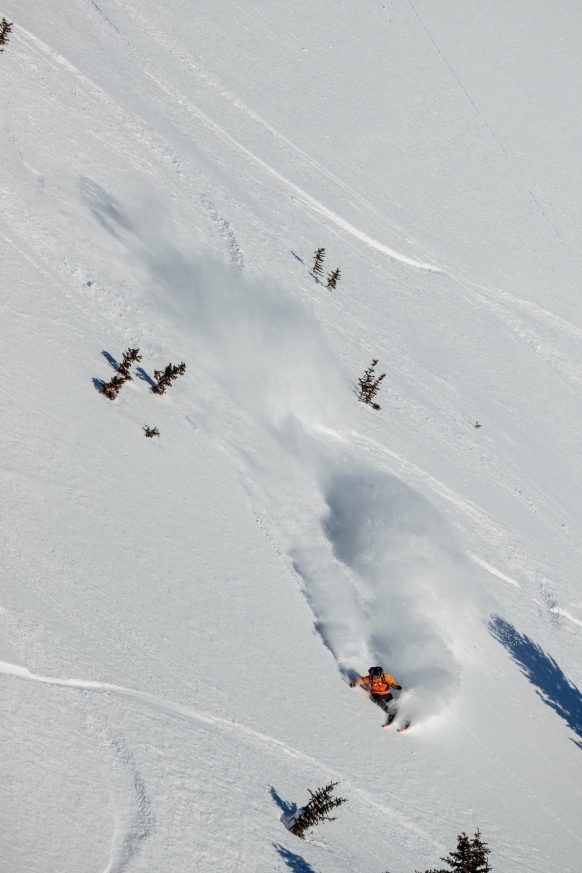 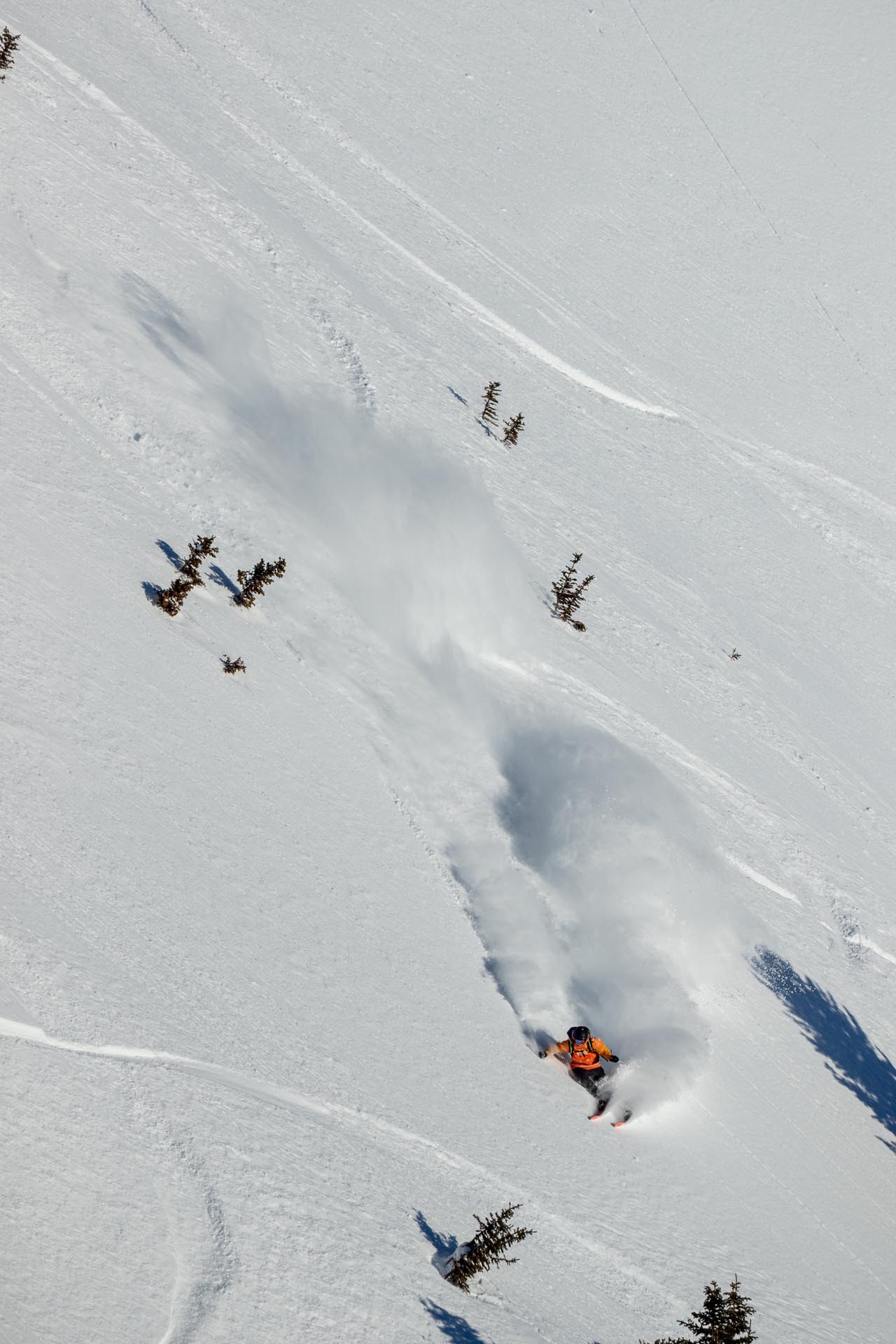 Jacqueline Pollard, at speed and in control. Photo: Jeremy Bernard/FWT

Following a week of practice in Whistler, Swiss rider Elisabeth Gerritzen followed a line similar to Pollard’s. Near the top, she flew off the windlip, ripped aggressive turns finished the line with a new double-cliff combo deep into the fall-line with lightning speed. The run put her into third place.

Arianna Tricomi found success on a similar version of the same line as Gerritzen, spinning a 360 off the top windlip. Even though, according to Arianna, she missed her last feature due to speed, the run earned her a 86.00 and the second spot on the podium. 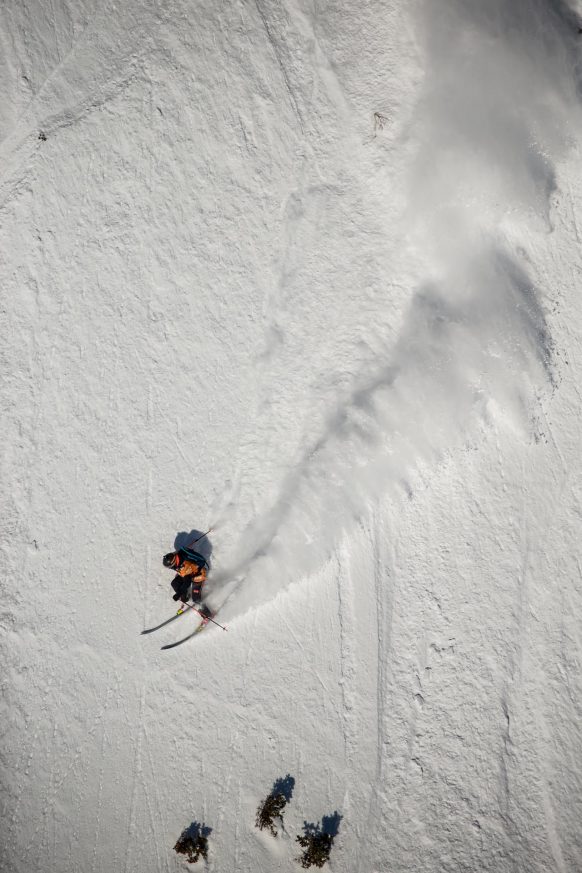 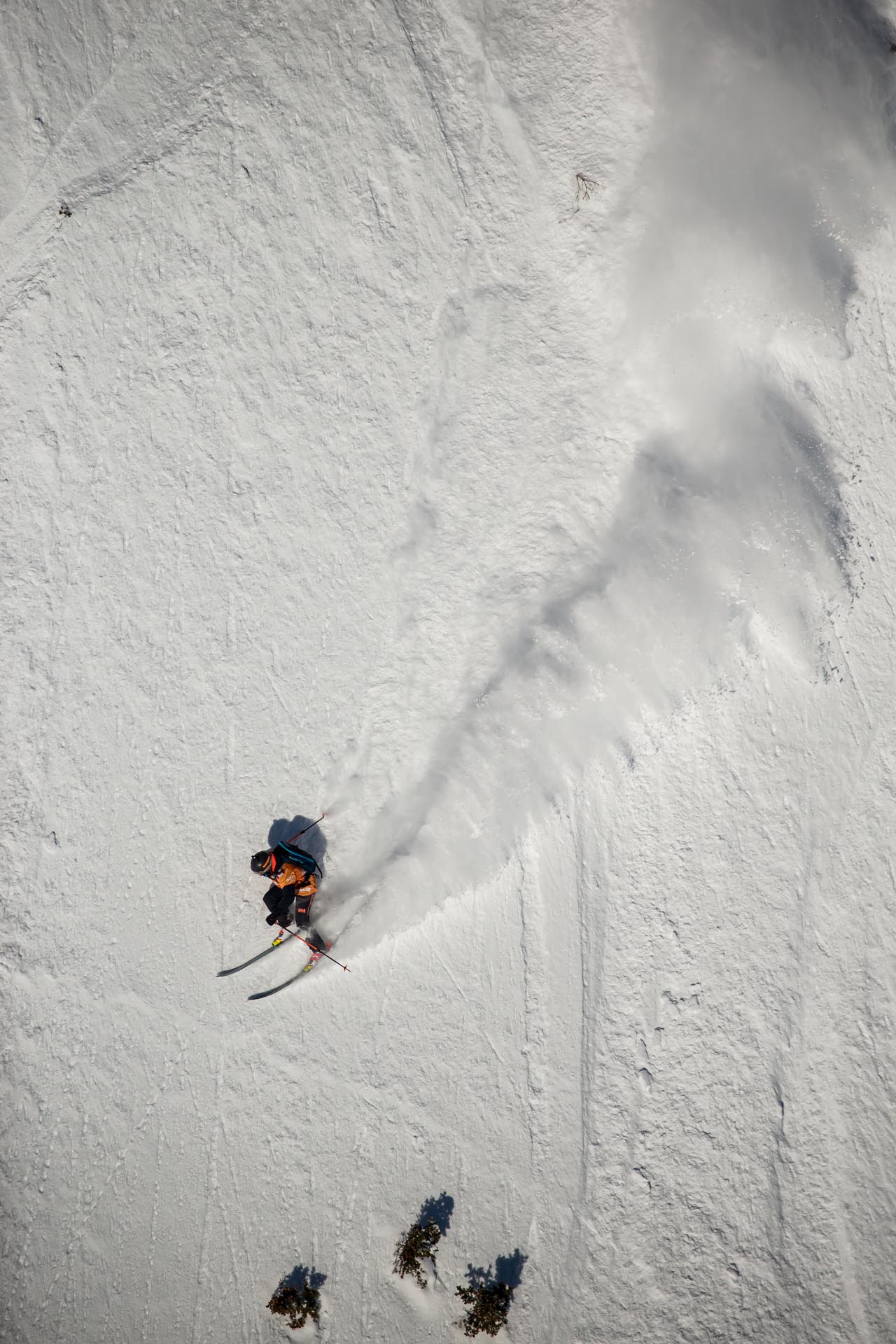 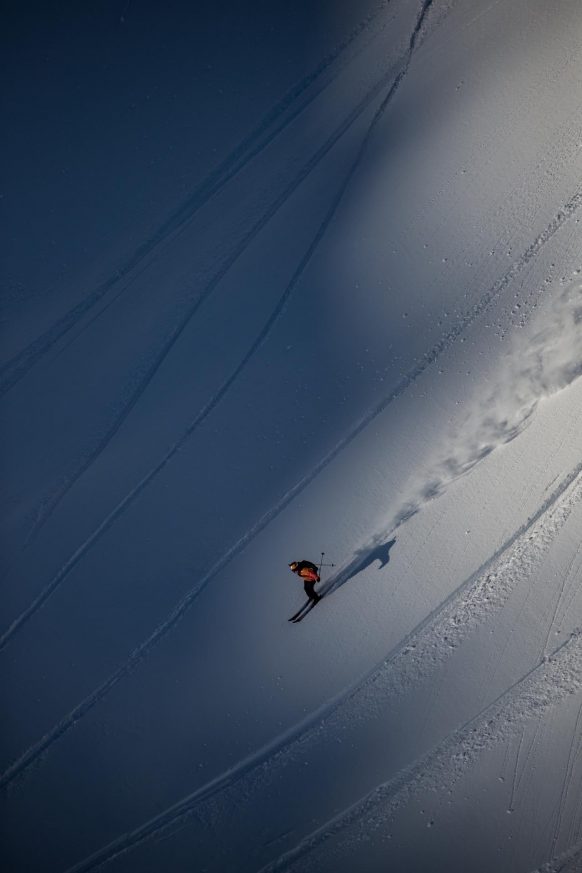 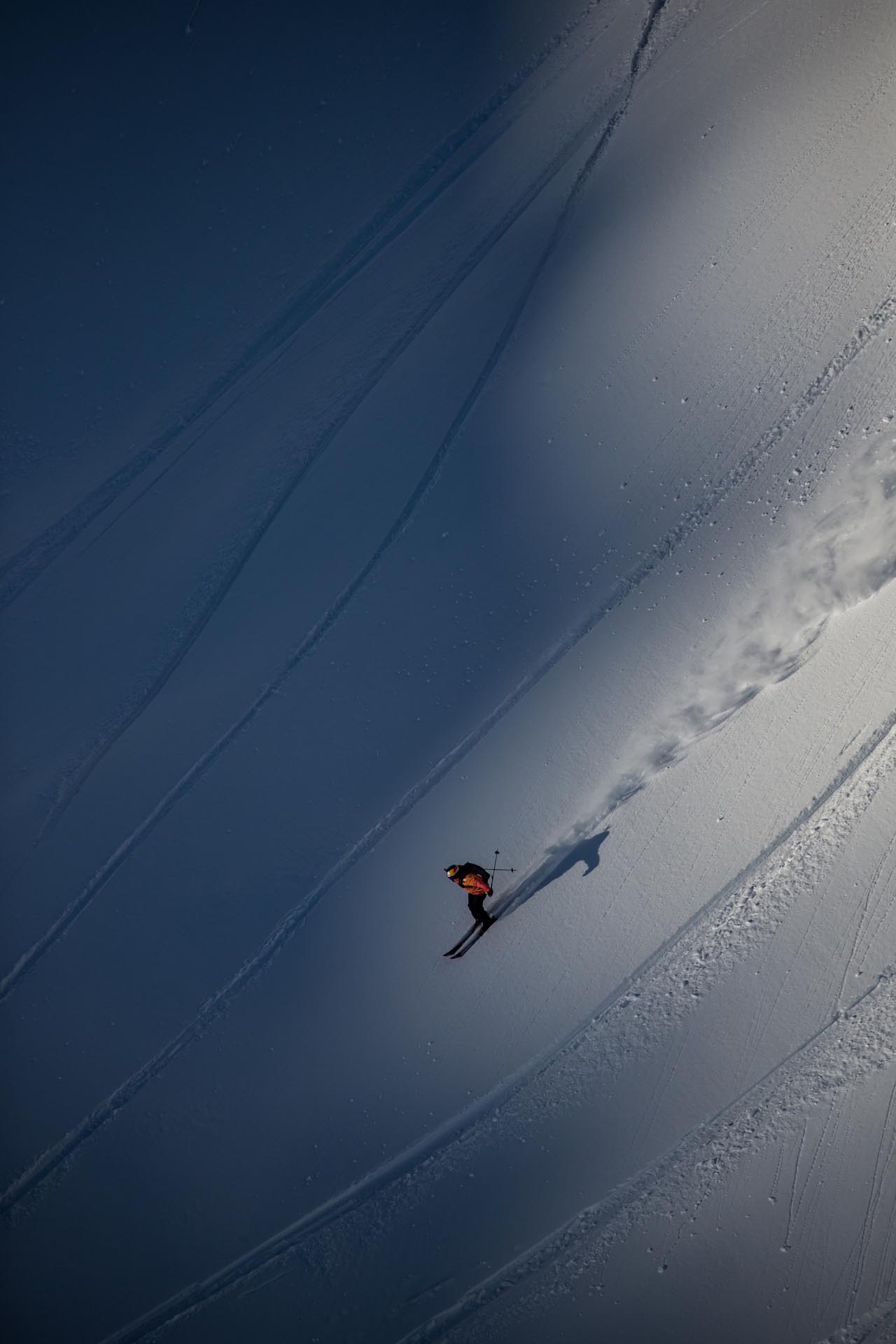 Jackie Paaso shook off a scary slam last week with a strong, clean run, while Hedvig Wessel put down some solid skiing, but was unable to find the magic (i.e. her monstrous backflips) that put her in the top spot in Hakuba. Emma Patterson and Ayana Onozuka, meanwhile, netted two of the biggest airs in the women’s field, while Juliette Willman and Evelina Nilsson brought high-speed heaters to the finish line.

Fast, aggressive, controlled runs defined the day: the women seemed to be in charge of this face, and executed exactly what they needed to. There were no major crashes and few dramatic recoveries. Hotter took the lead early and held on for the victory, while Tricomi skied into second and Gerritzen claimed third. Ski Women’s overall ranking shifted accordingly, putting Tricomi back to a familiar position in first overall, followed by Hotter in second and Hedvig Wessel in third. 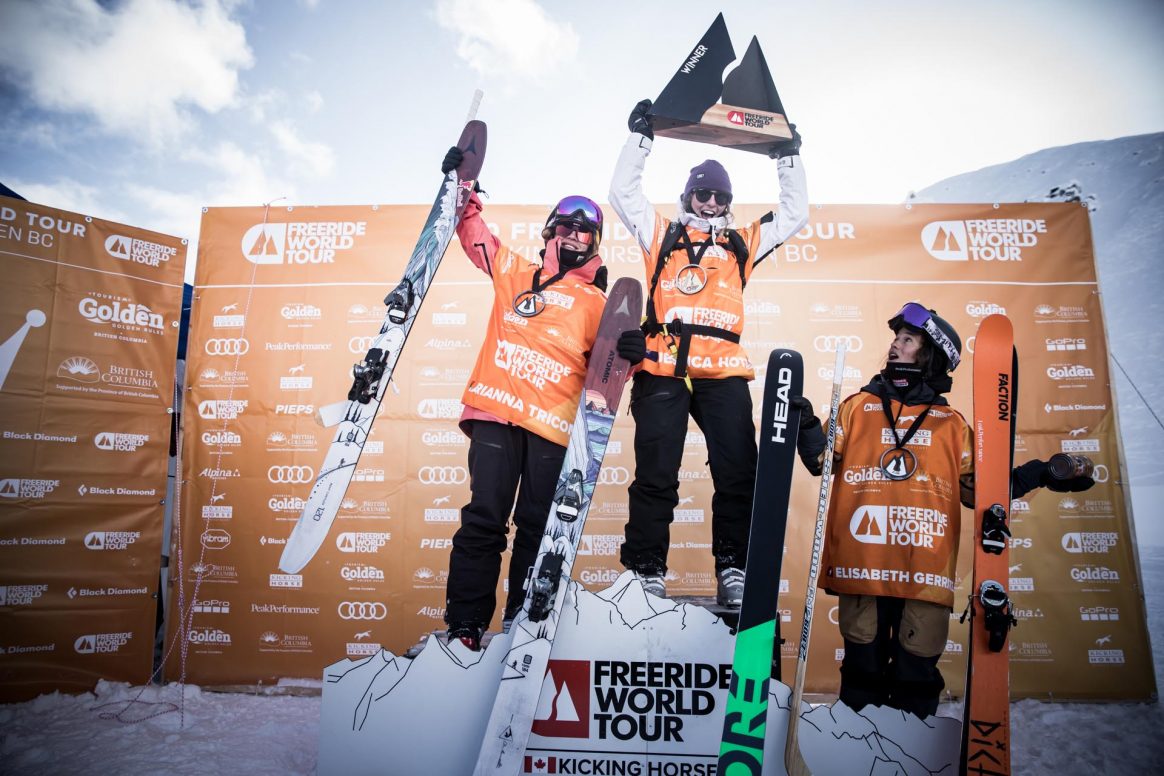 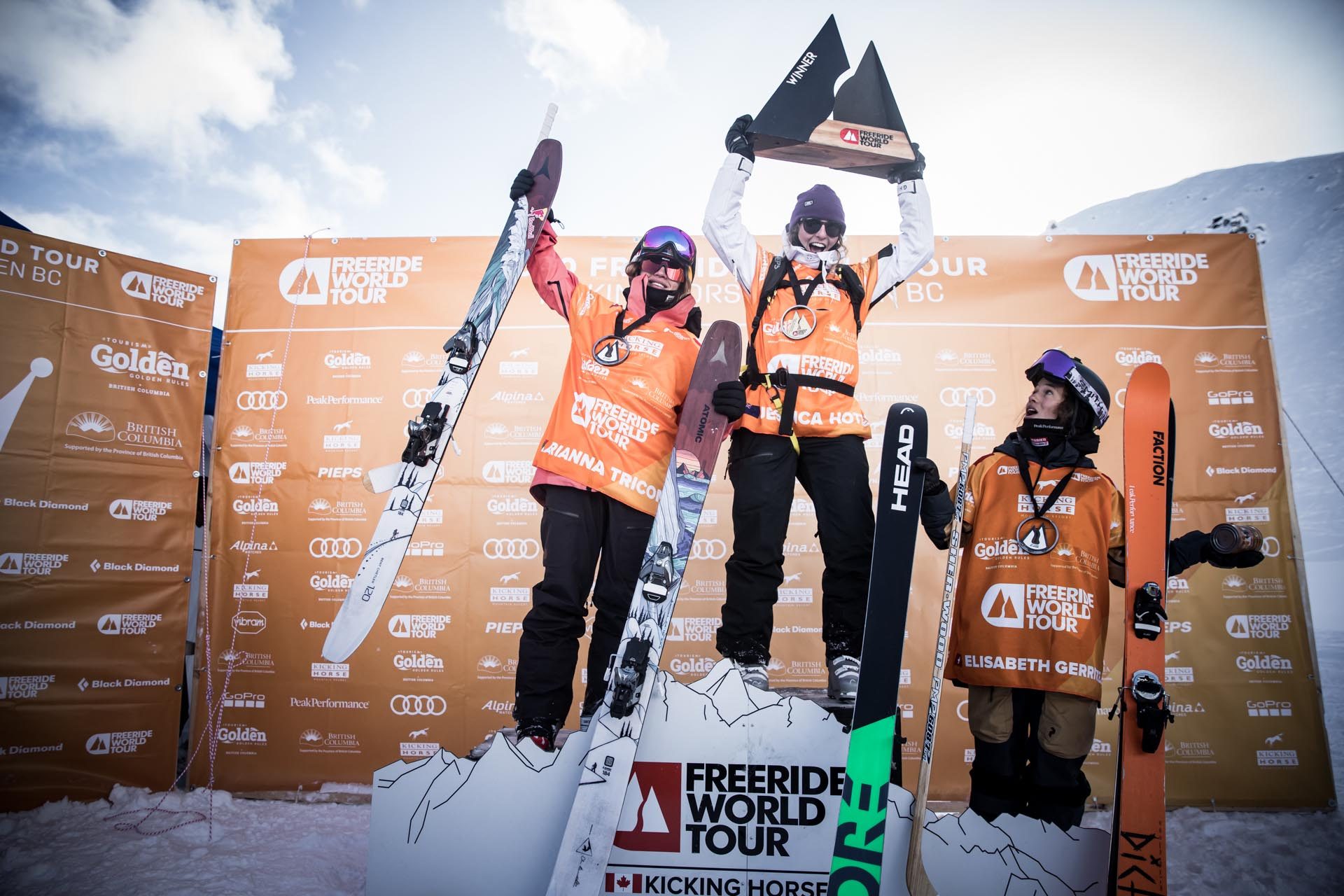 The ski men were the last group to ride. By that time the face had accumulated criss-crossing traverse tracks, and the more popular cliffs had minefields of bomb-holes in their landings. If control was the theme of the day for the women, chaos was the theme for the men as 13 of the 23 riders crashed during their runs. Two of the men, Wadek Gorak and Konstantin Ottner, were barely able to ski down after their impacts, and Pehota later called his slam the worst in his career.

Speaking of Pehota, he was first out of the gate for the men. The wild card entry floated a cork 360 off the top wind lip and arced straigh into his first cliff. Landing off balance with too much heat, he got compressed, then high-sided and tumbled into the cliff band beneath him. Had it worked, he would have linked two massive cliffs into a high-speed double in a bold line that could have challenged the top spot. However, with commitment comes consequence: Pehota didn’t hold on after the first cliff and went tumbling over the rocks of the second. Everyone breathed a sigh of relief when he stood up and was able to hike back to his skis.

Gotta pay to play… worst crash of my career yet, walking away from this one with only some minor cuts and bruises. Grateful to be alright and ready to start filming and getting the rest of the season underway with🙏🏼 #fullsend

Tao Kreibich was second. Dropping from start two, he was the first to launch the Malakhov cliff (named for Ivan Malakhov’s use of it in his winning 2018 run) but got caught up in the soft snow and high-sided immediately after skiing out. The Malakhov cliff proved enigmatic throughout the day, as only one of the five riders who attempted it came through unscathed.

Moving to the Freestyle Alaska section of the Ozone face, Hank Bilous built on his success in Hakuba by throwing a massive 360. Despite the massive air and freestyle element, the judges docked him severely for his lack of features and creativity. 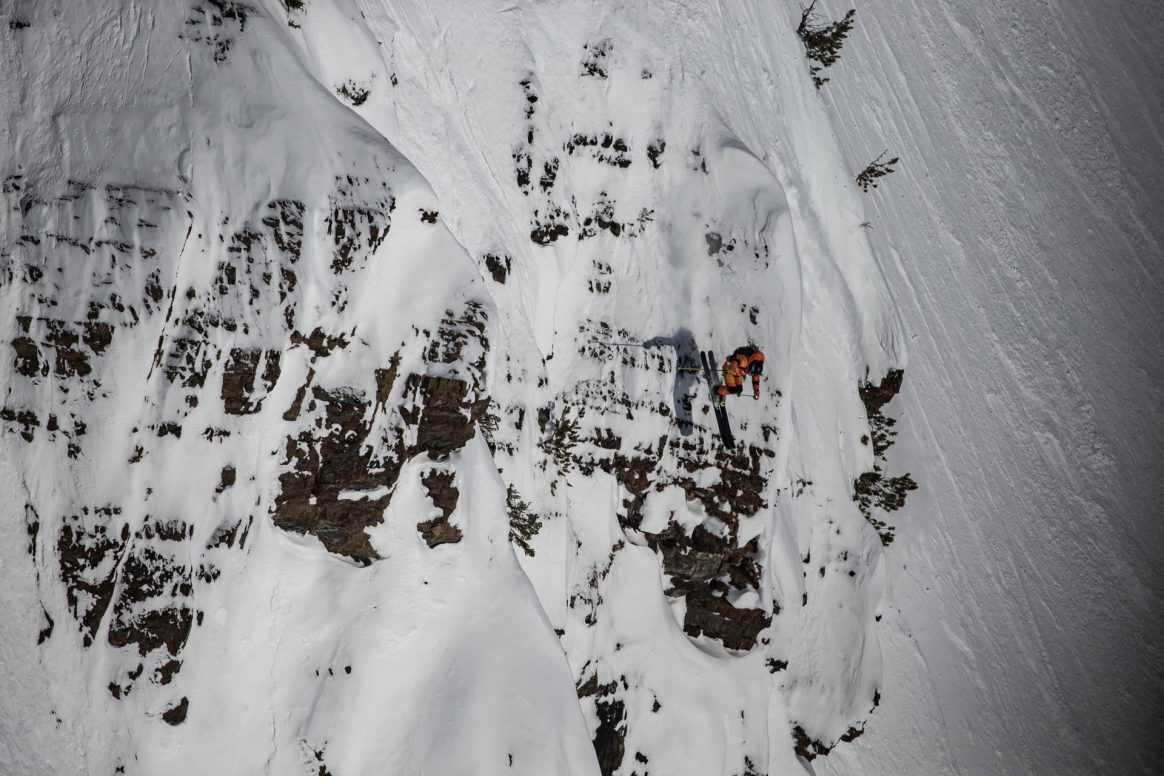 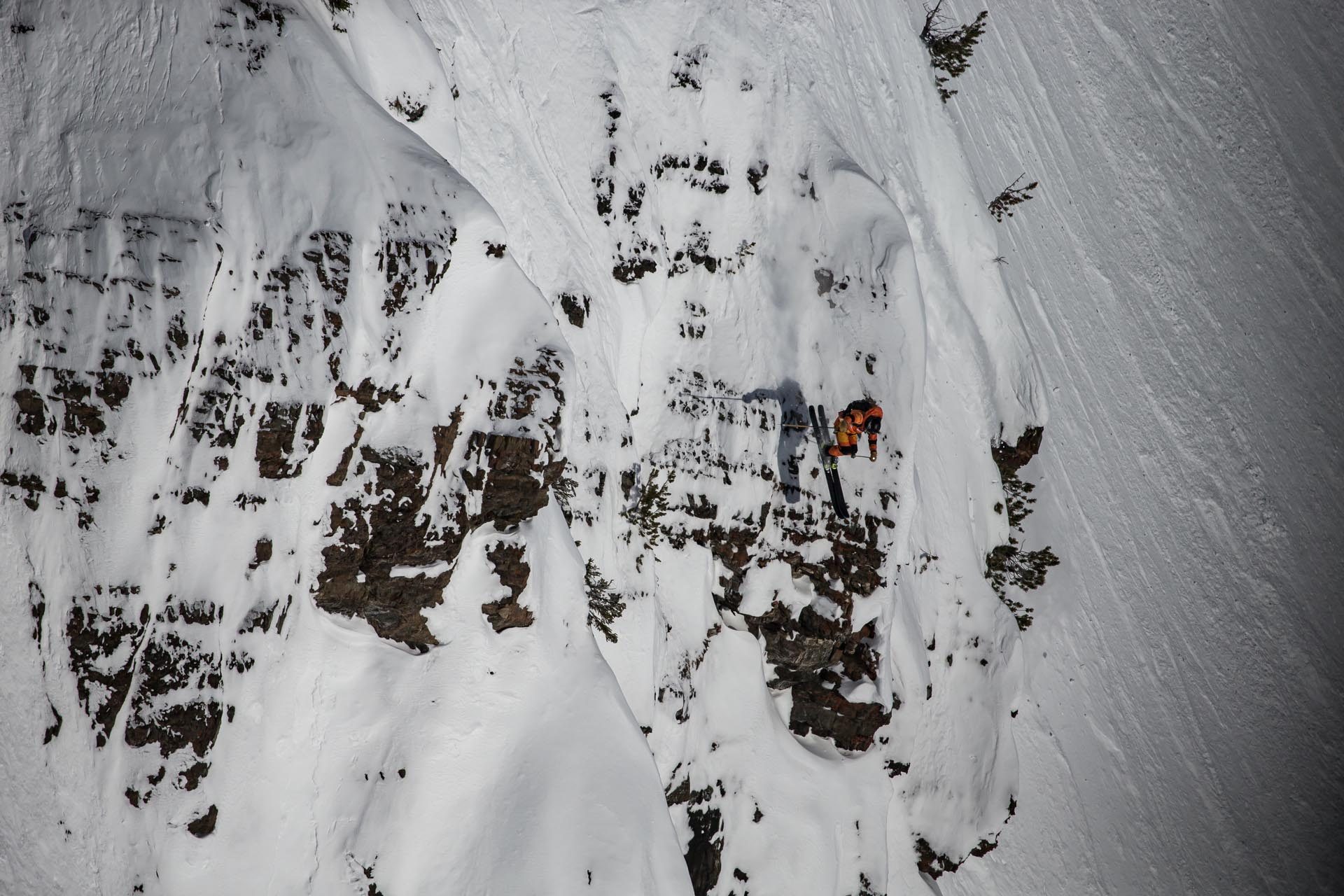 Tao Kreibich got tangled up on the Malakhov cliff, but still sent it lower down. Photo: Dom Daher/FWT

Andrew Pollard came through with a smooth, stylish run, combining cliffs up top, a 360 off The Nugget, and a rocket-speed cross-hill double cliff to move into third place. Tom Pfieffer followed a similar line and came through clean. Coming off a tumultuous crash in Hakuba, Jack Nichols chose a more conservative approach and put it to the finish without issue. Isaac Freeland ripped through three cliffs, but lost points on a backslap after landing in a bombhole below The Nugget.

Bringing the most freestyle elements to the Ozone face, Carl Regner Eriksson launched a backflip up top, a three off The Nugget and another 360 on the cross-hill hit that Andrew Pollard opened up. His run earned him an 83.33, putting him into second place. 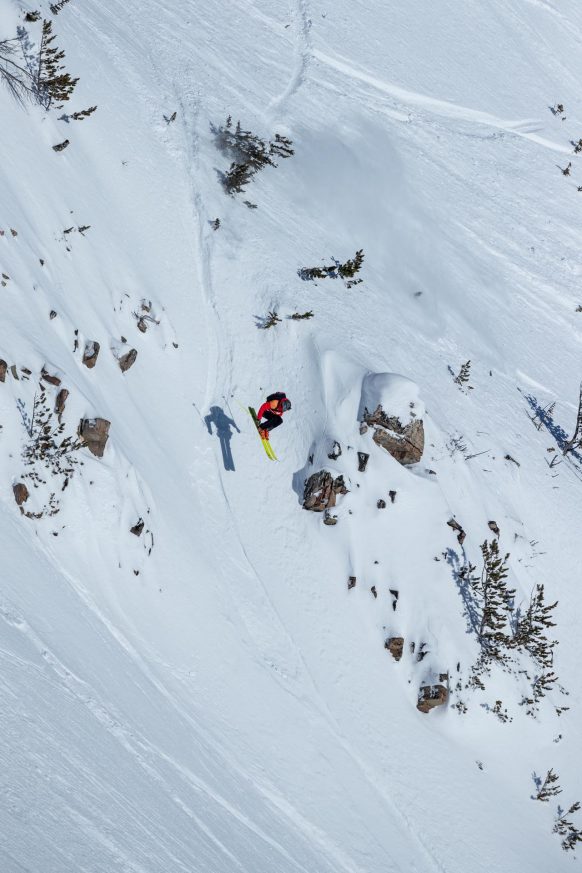 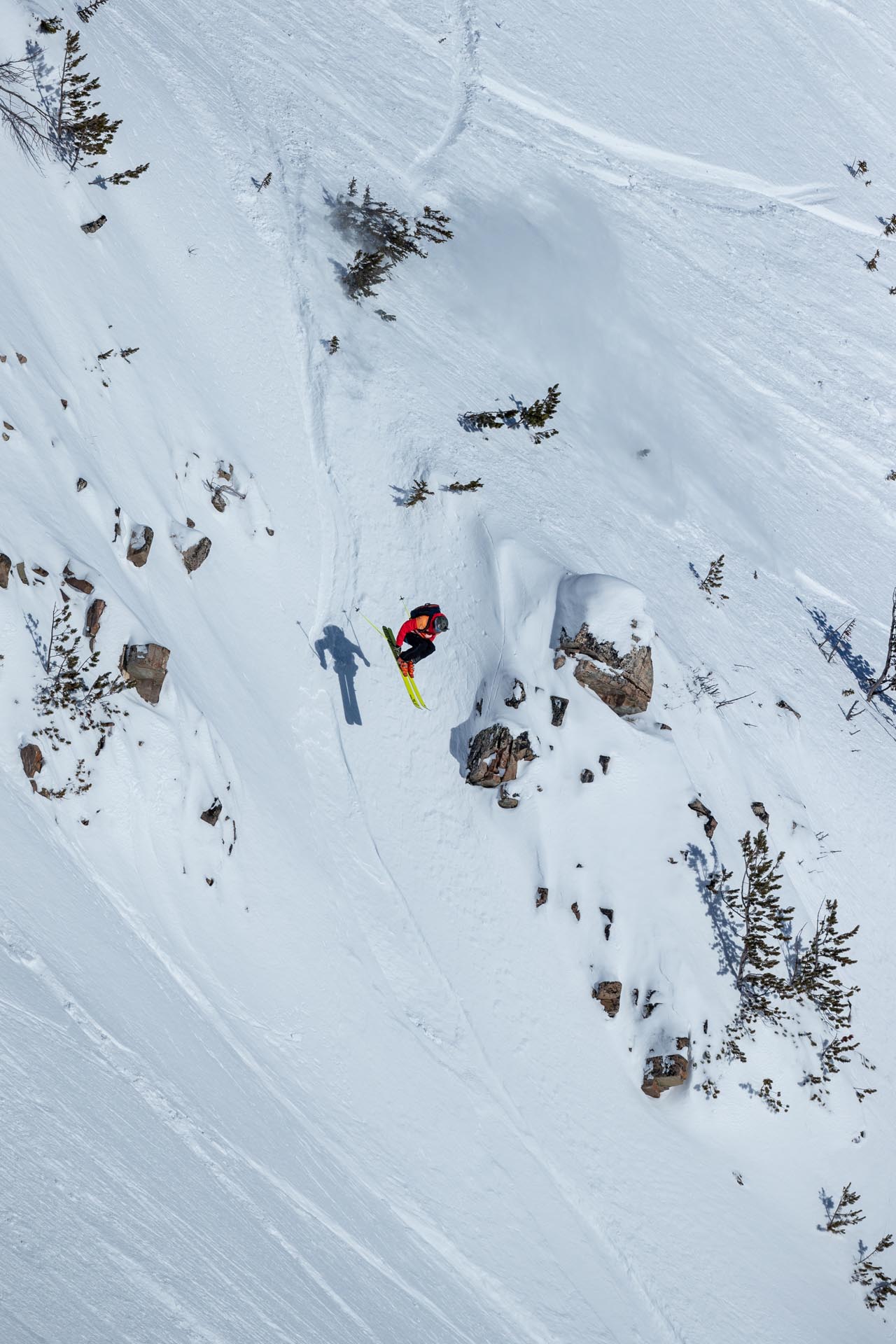 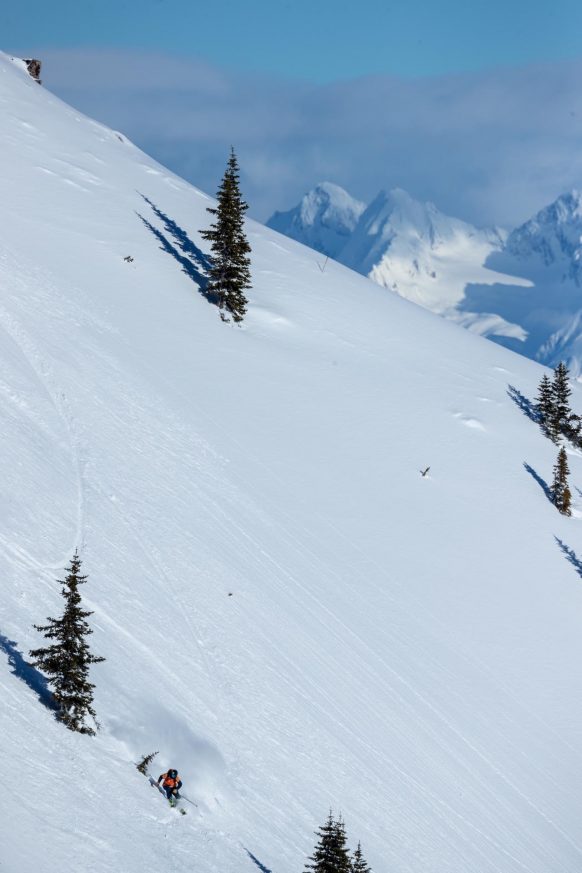 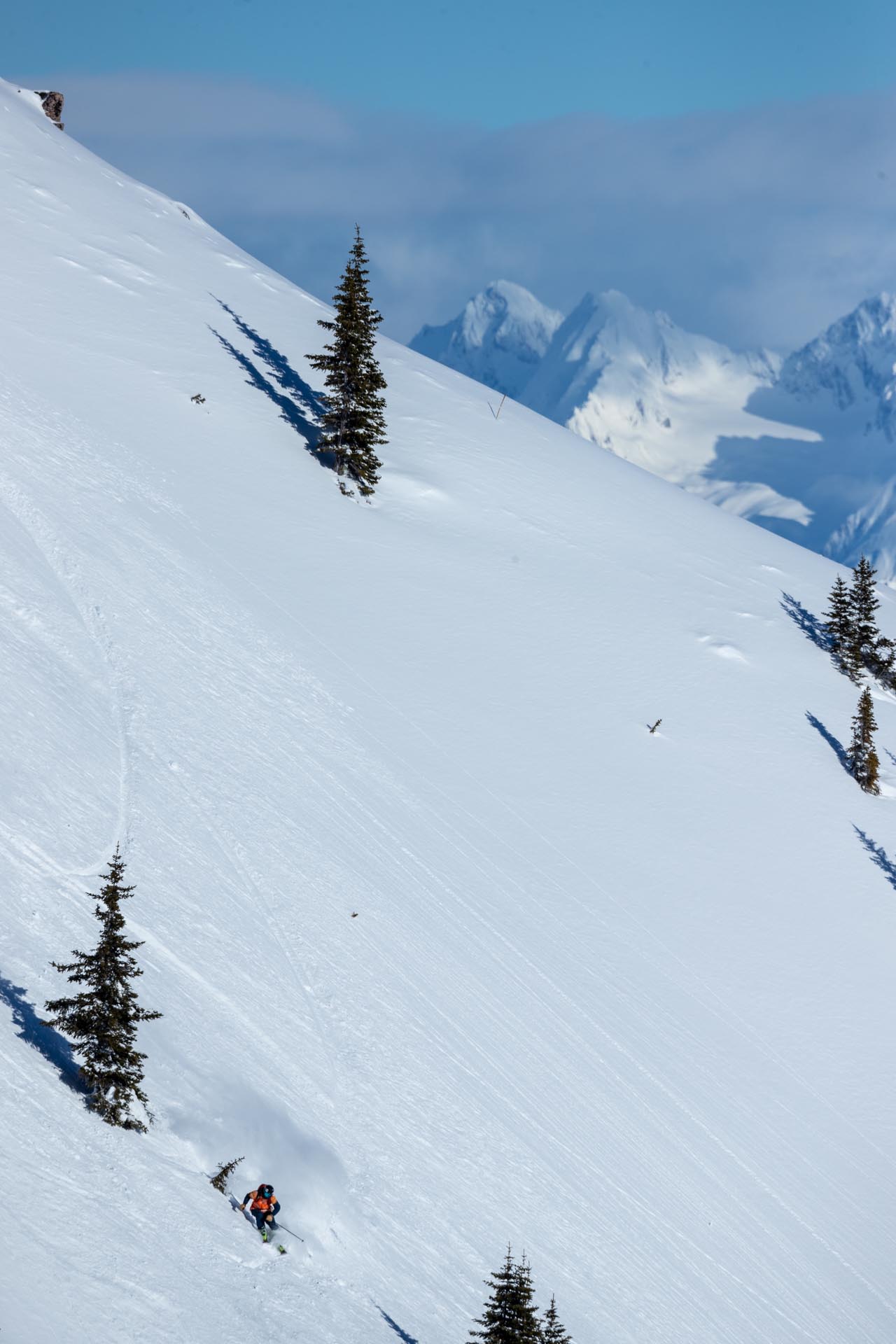 Yu Sasaki dropped jaws with his send off the biggest cliff on the face, the Rodney Pyramid, the disgustingly large feature pioneered by FWT champion and wild man George Rodney in 2018. Until Yu’s run this year, only George had even attempted it (and exploded upon landing), and no one had yet stuck it in competition. Sasaki plummeted out of the sky like a paratrooper, landed less than a meter from a tree, and skied away like nothing happened. The cliff earned Sasaki the Peak Performance Radical Moment, but a weird crash off the windlip at the top of the venue kept him off the podium. 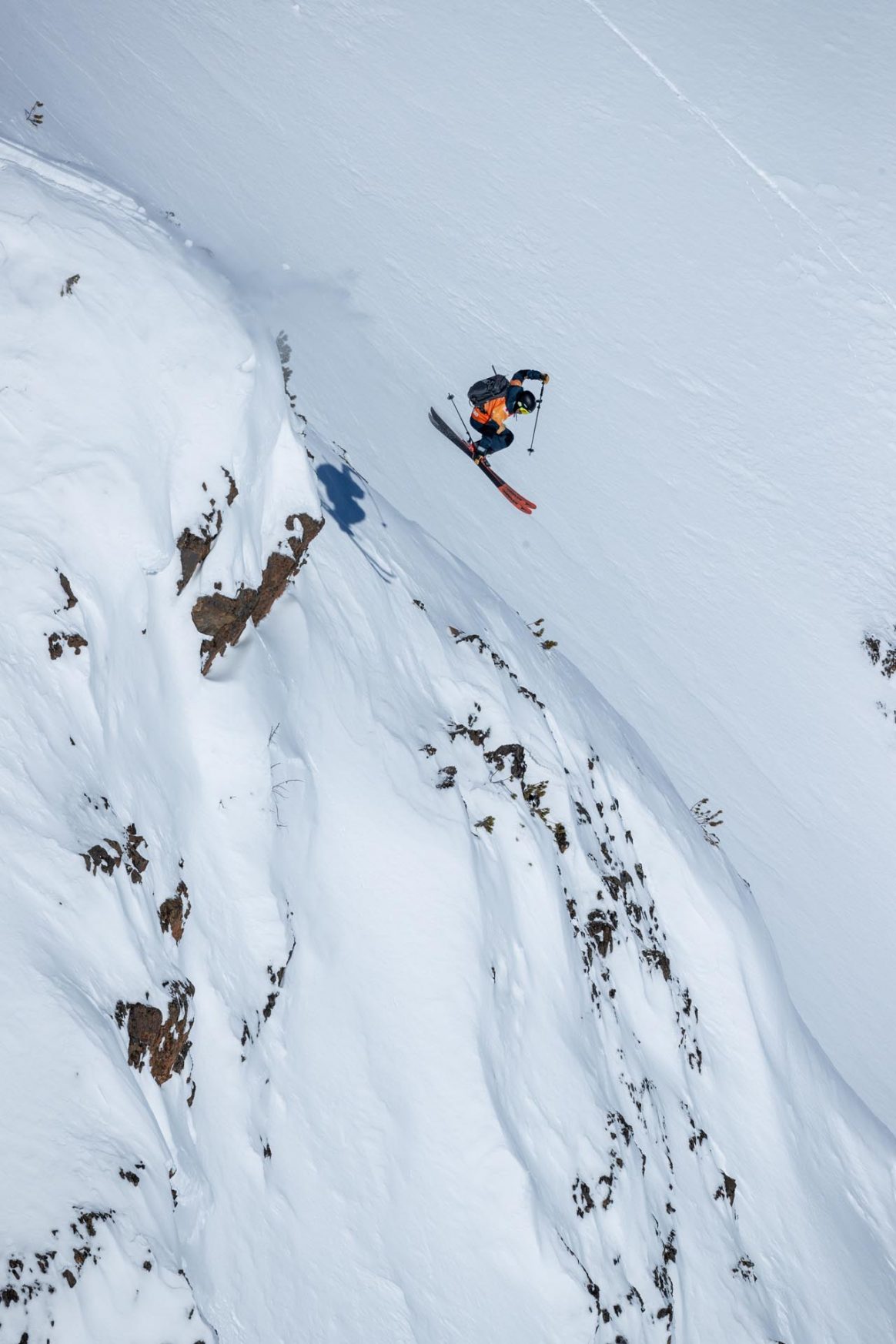 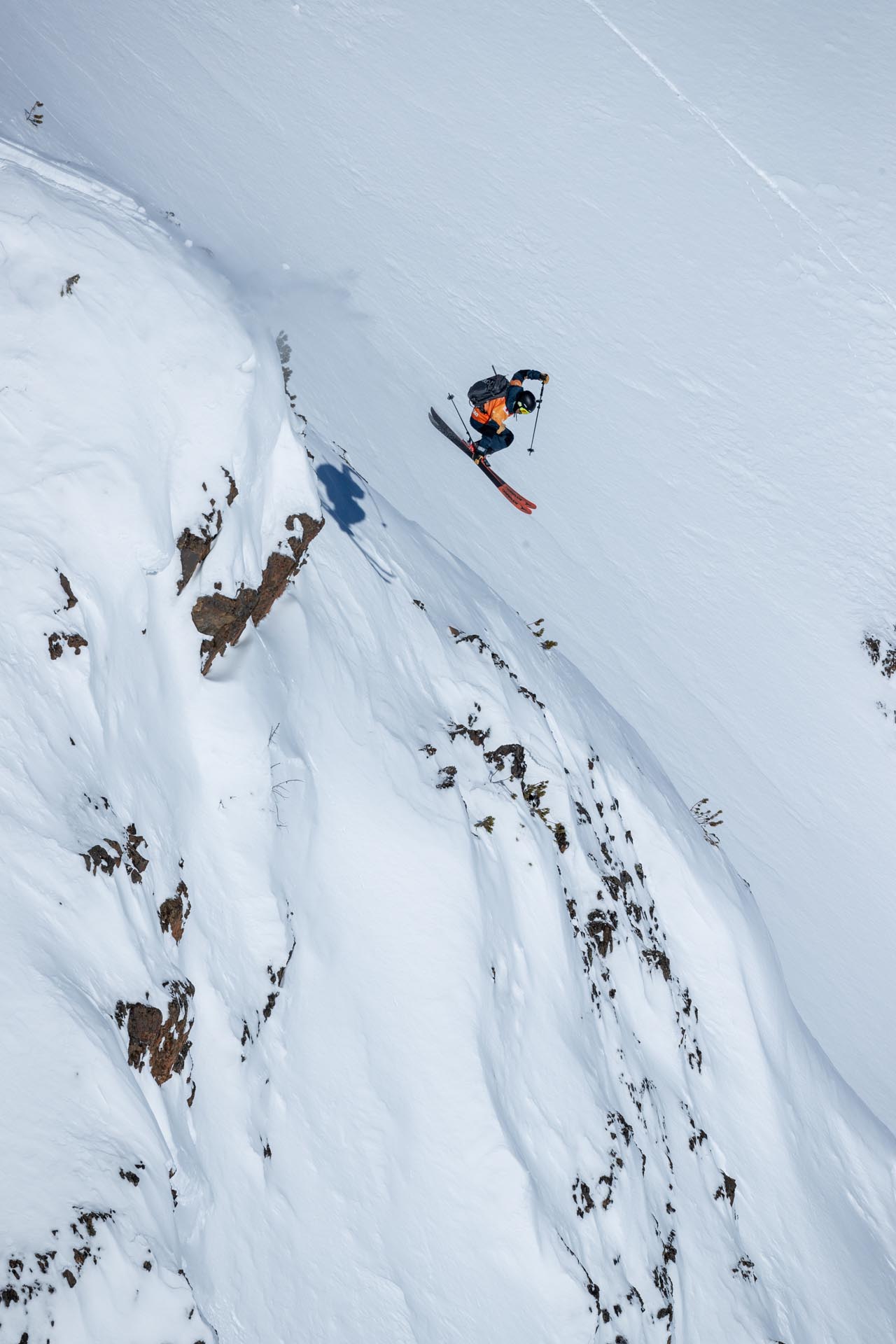 Yu Sasaki sends the biggest drop of the day, and stomps it clean. Photo: Jeremy Bernard/FWT

Sasaki kicked off a run of crashes as Kevin Nichols smacked into the up-side of a rock well below a cliff and somersaulted, and Wadek Gorak exploded after a backflip off the Malakhov cliff, smashing first into the snow and then a tree in the landing. Moving slowly, he gingerly picked his way down and collapsed in pain in the finish corral, holding his left leg. Immediately after, Konstantin Ottner also went for the backflip on the same cliff and crashed as well. The German rider has spent the past year rehabbing a dislocated shoulder, and it was crushing to watch him ski out with his right arm locked in a sling-like position. Even veteran rider and current points leader Drew Tabke couldn’t skate through clean, front-punching after a floaty 360. 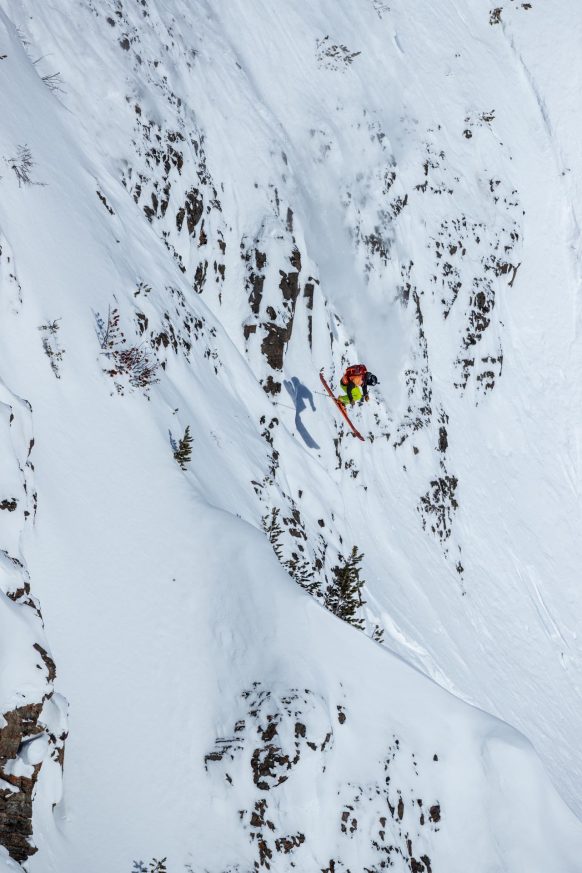 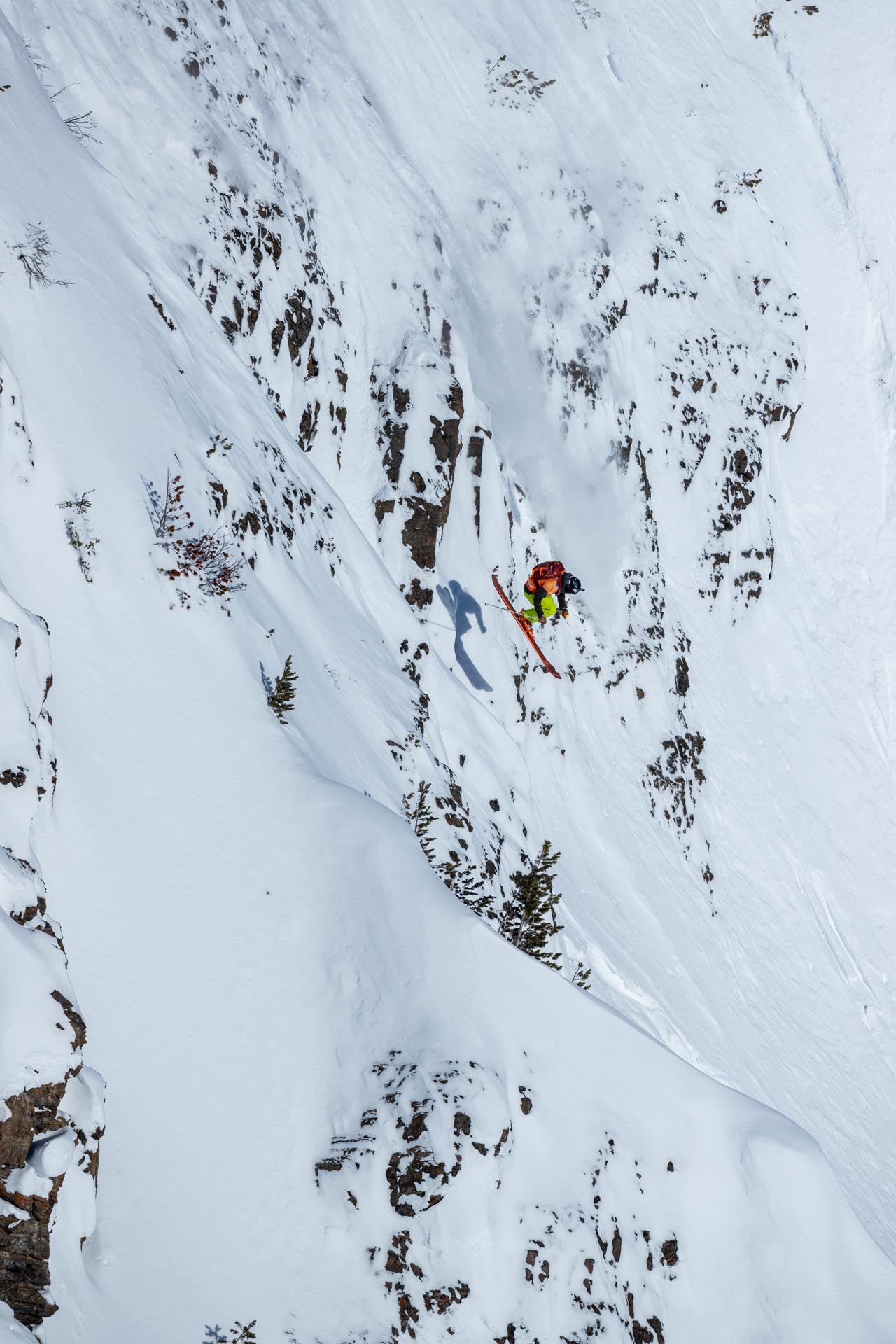 Kevin Nichols making the most of it. Photo: Bernard/FWT 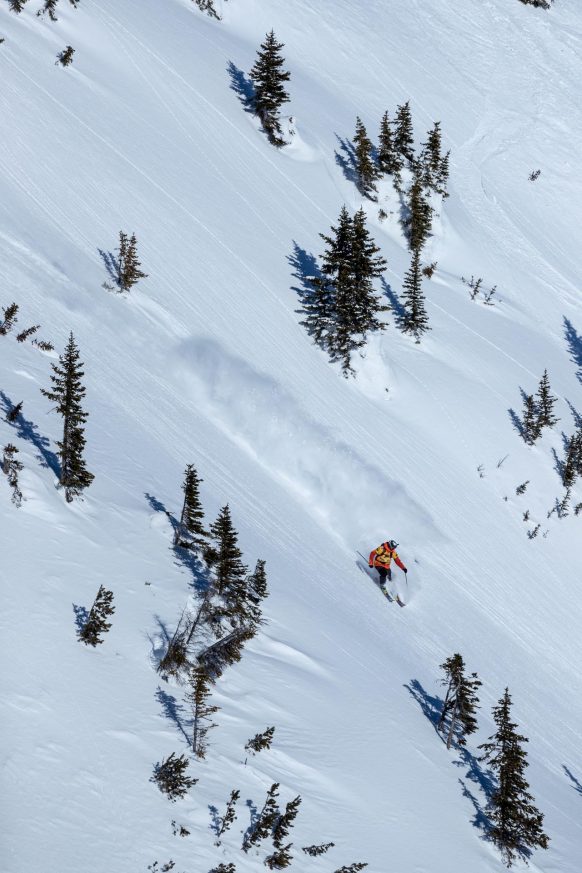 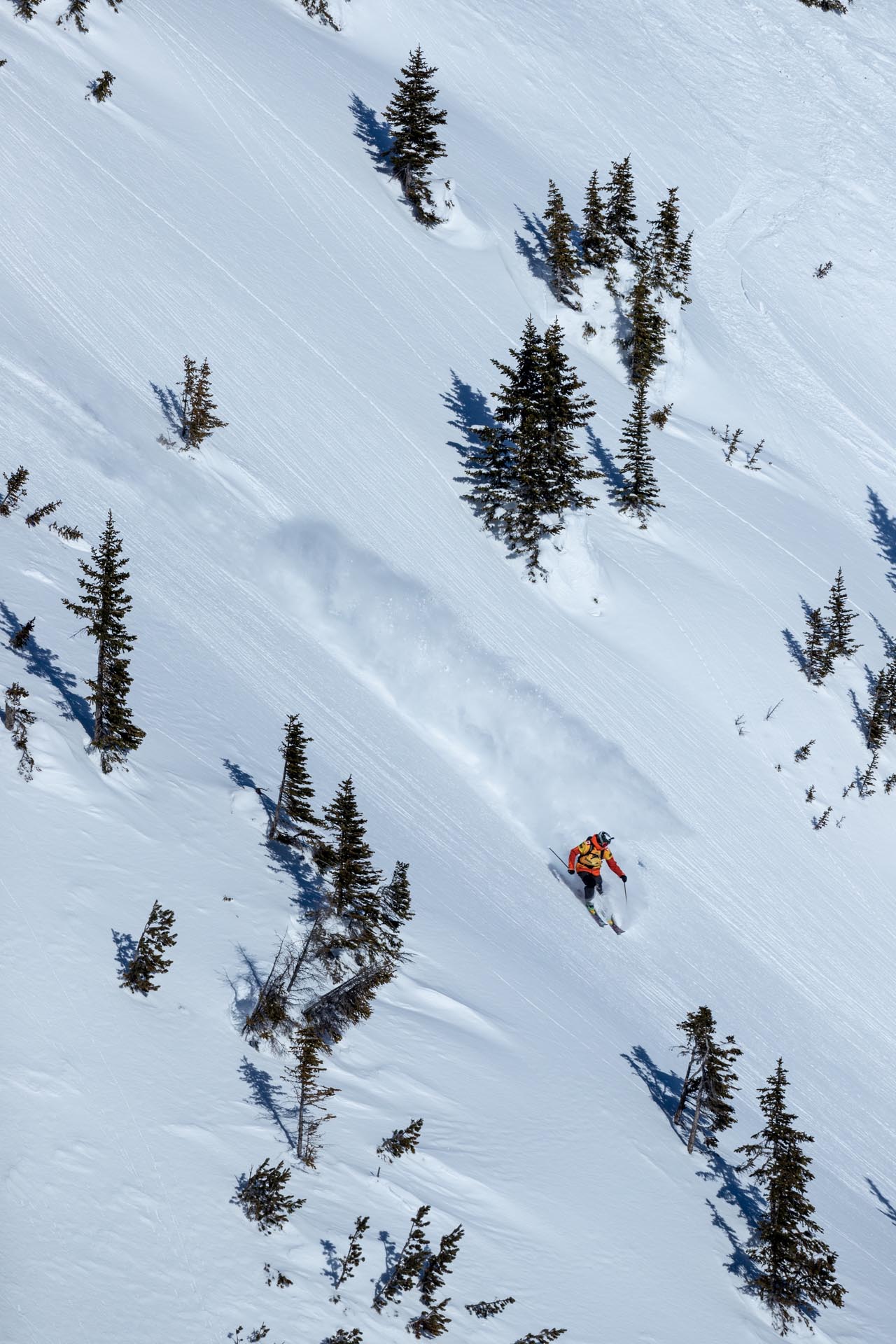 Tabke was skiing strong, but unexpectedly punch-fronted on the landing of his 360. Photo: Bernard/FWT

Ski Boss Tanner Hall temporarily broke the slam streak, taking a new line through the Freestyle Alaska section and tossing a lofty backflip. But he seemed to have some trouble with speed, and lost points for a lack of features in his run.

Afterwards, the crashes continued as the Malakhov cliff claimed another victim, this time Ivan Malakhov himself. who detonated in the same landing as Ottner and Wadek. Aymar Navarro powerhoused into a flat compression off a sizable drop, just missing a rock. Reine Barkered front-punched somersaulted, then fell again on a 360 attempt.

Blake Marshall squeaked through, throwing a daffy off a cliff up top, a rightside 360 off The Nugget, and a blitz through a cross-hill triple on his exit. His Kiwi countryman Craig Murray found success in the Freestyle Alaska zone with a technical chain of cliffs into a 360, dancing out on one foot. 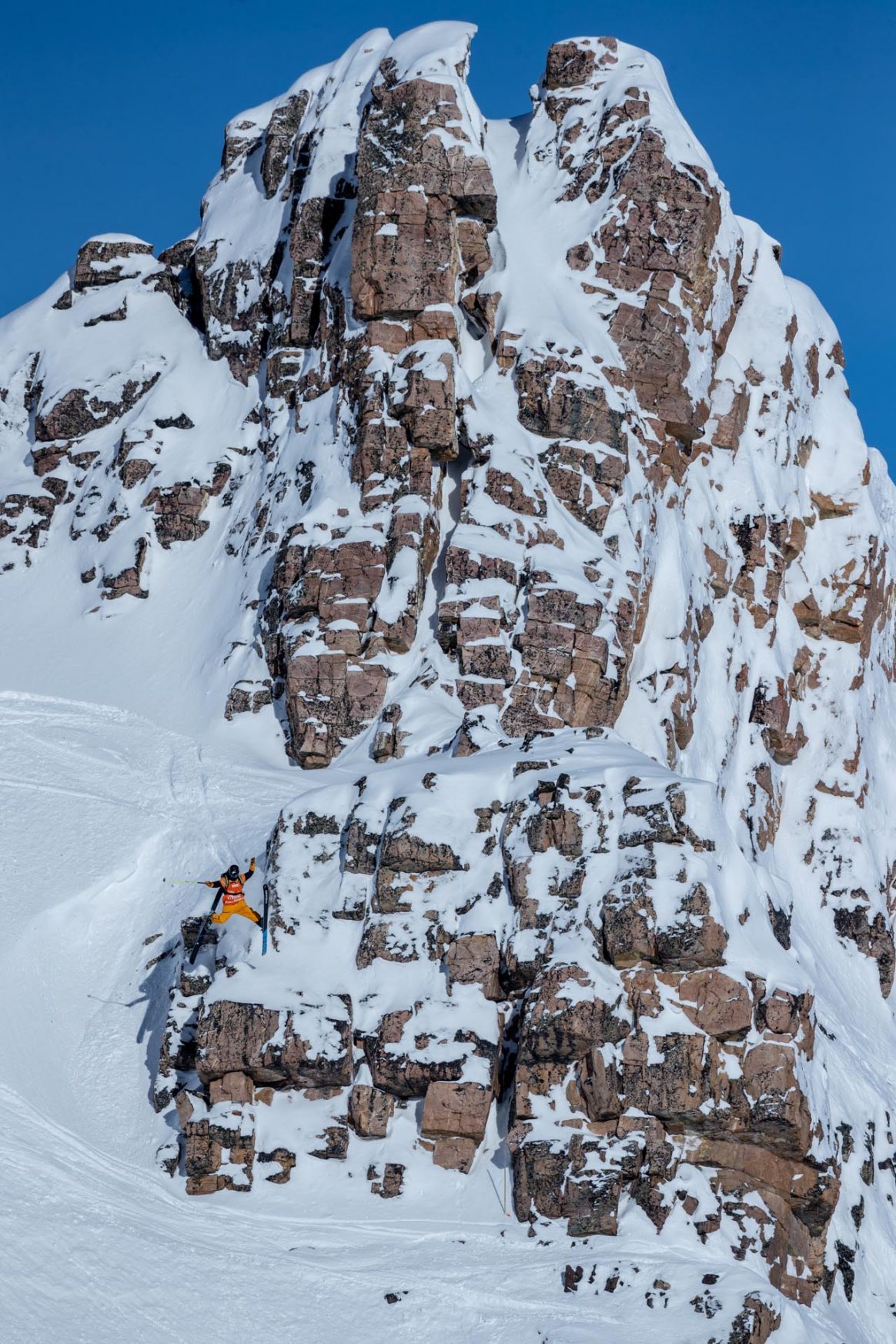 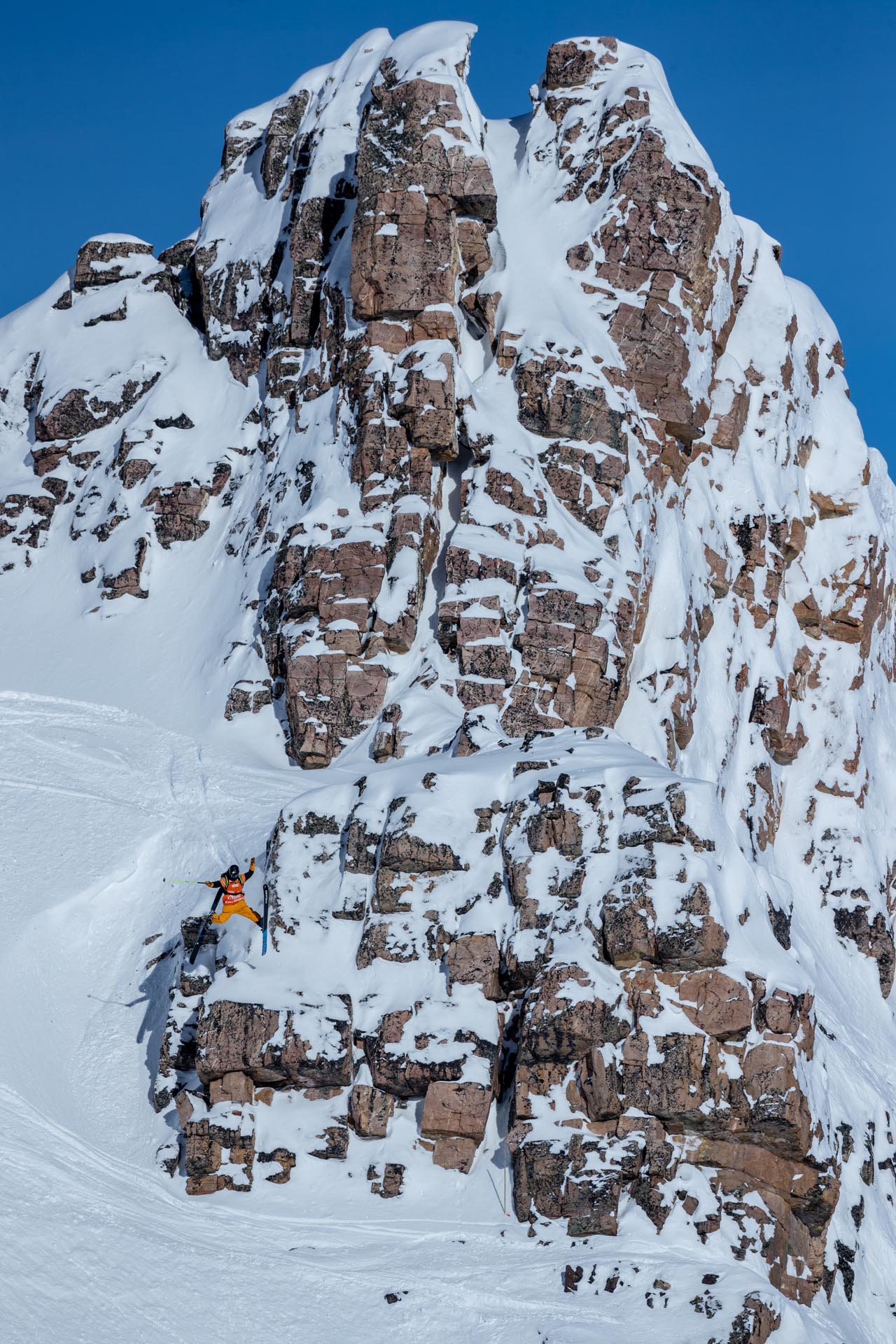 Kristofer Turdell, however, went home with the crown. After it had bested four other riders, Turdell cracked the code on the Malakhov cliff, taking a different angle and sending a spacy backflip. Wheelying out of the cliff, the Swede scythed back into the fall line to hit The Nugget, then raced to drop the nose of The Peloton exit air. Turdell cut less than ten turns and was in the finish corral about 30 seconds after dropping.

Tim Durtschi, Yann Rausis and Carl Renvall closed out the circuit. Durtschi crashed following what looked like a cork 720 attempt in the Freestyle Alaska area. Rausis, with one of the more creative line choices, billy-goated his way to an untouched cliff in the same zone, then traversed to the Rodney Pyramid, but clipped a rock in the landing and tomahawked. Renvall barely escaped clean, getting caught up in a few different places on the Ozone face.

When the slough settled, Swedes Turdell and Eriksson took the top two spots with Andrew Pollard in third. 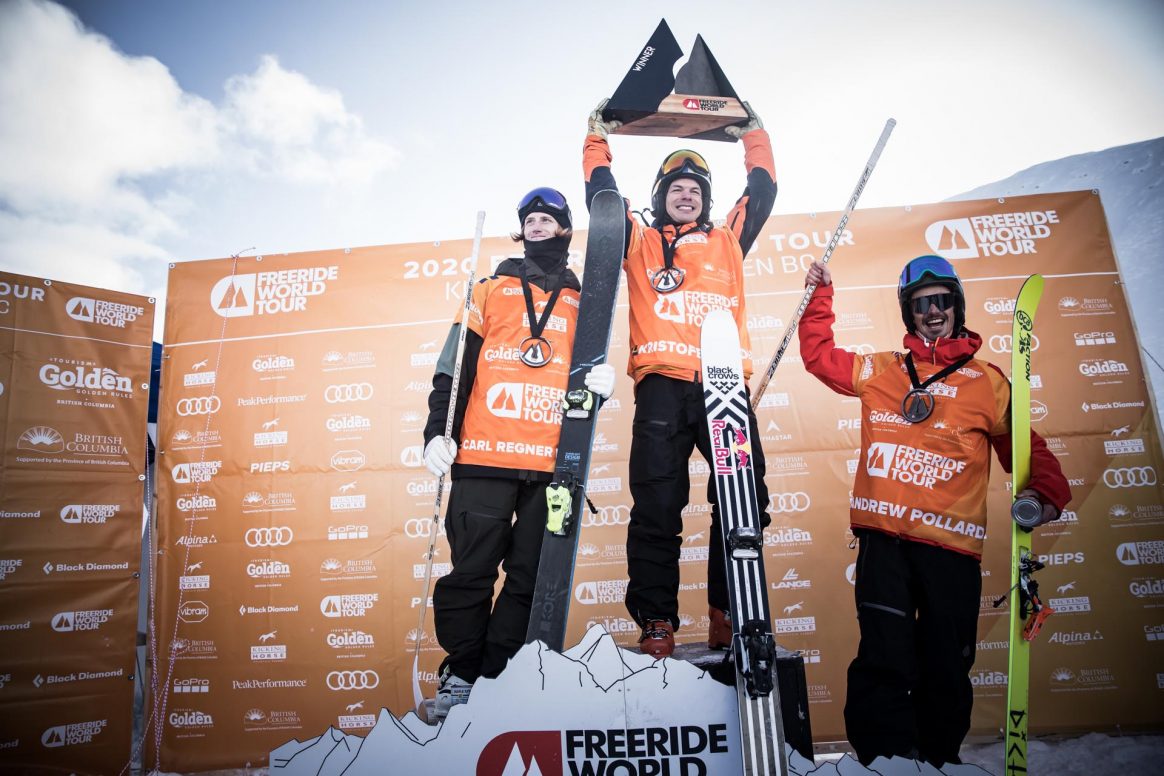 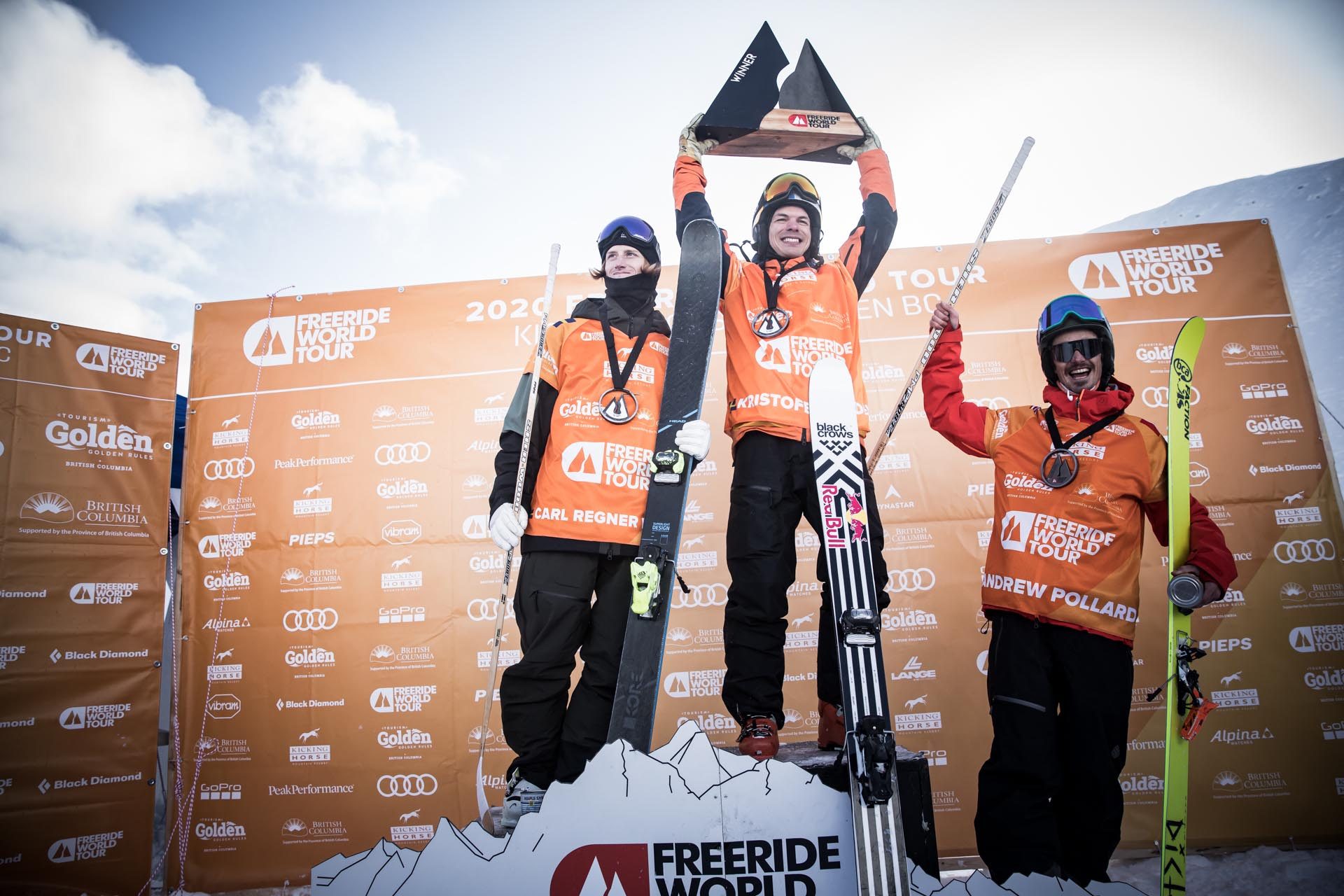 An inverse of the results, the overall standings of the Ski Men field have Pollard in the top spot, Eriksson in second, and Turdell in third in a tight race, with less than 2,000 points (a 21st place result awards a rider 2,000 points) separating the three.

The Freeride World Tour moves next to Ordino-Arcalis, Andorra from 28 February to 4 March. Stay up on all the happenings at freerideworldtour.com.