Skicircus Spot Check: Beyond the Hype

Skicircus Spot Check: Beyond the Hype

Fresh tracks a week after the last storm—that's what we came to Saalbach for. Paul Klein shows the way.

Next week, the Freeride World Tour circuit will visit the well-known Austrian resort that goes by the lengthy name of Saalbach-Hinterglemm-Leogang-Fieberbrunn, or simply SKICIRCUS for short. Since Fieberbrunn has been a staple of the FWT calendar for many years, it’s not exactly a secret to the freeride crowd. Oddly enough, it’s also among your best bets when looking for untracked lift-serviced powder, even days after the last snowfall.

The 2021/2022 season hasn’t exactly been a winter for powder aficionados in the Alps. Snow levels are nearing record lows in the range’s southern regions, and even the north side, usually the most reliable in terms of snowfall, only sees a few centimeters of fresh every week or so. At least the temperatures have remained reasonably cold, so you can still find some undisturbed canvas for your tracks as long as you’re willing to hike for it. Near a lift, you have to be quick to get the goods, though. At least, that’s what we thought before our visit to Skicircus. 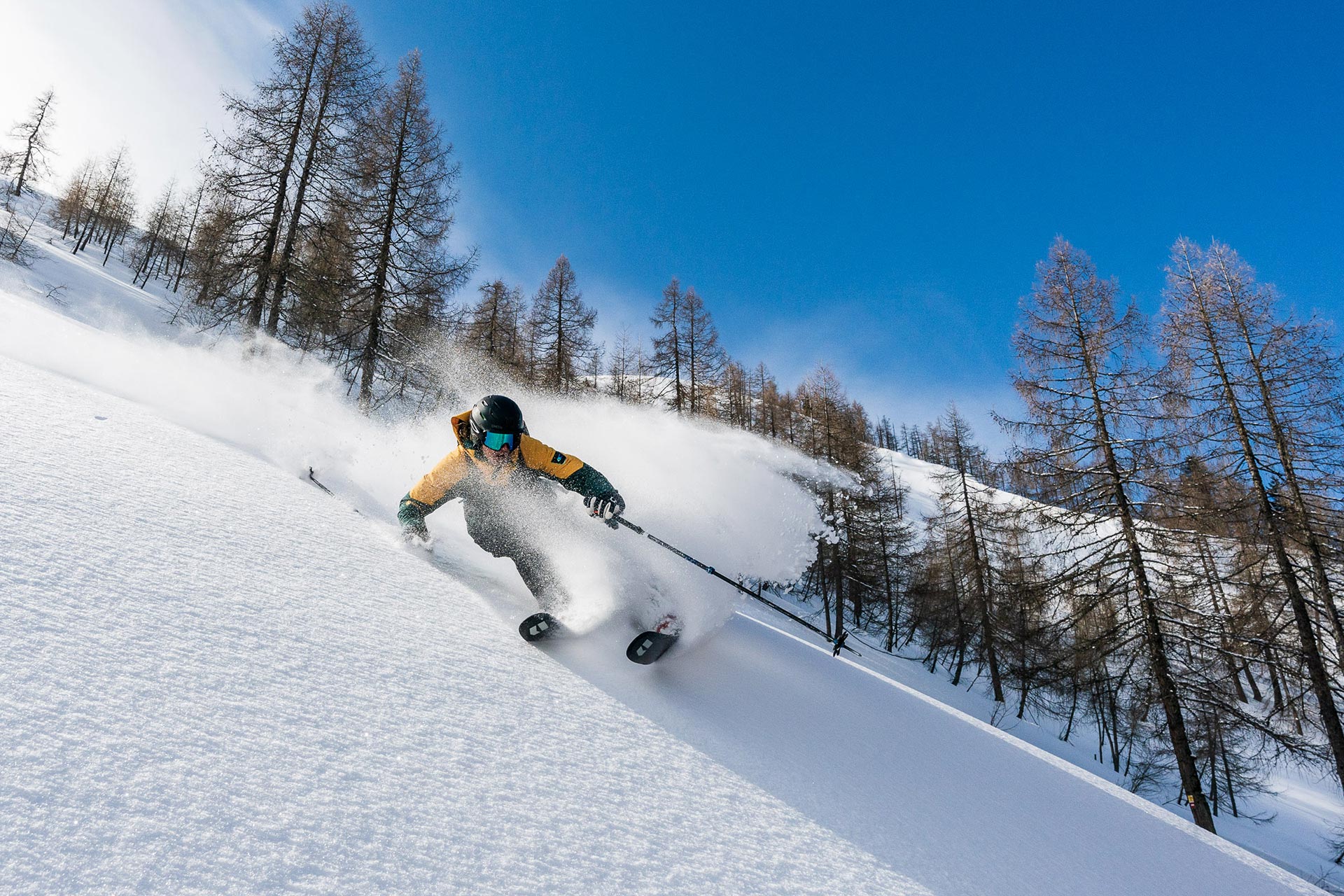 Some places get tracked out in hours after a fresh snowfall. Saalbach is not one of those places, as Nikki Sagmeister discovers.

Last week we got in touch with Paul Klein. Originally from Carinthia but now living in Saalfelden, Paul is the freeskiing coach at the local ski academy. We wanted to arrange a meeting with Paul for an interview about his job and the developmental structure for freeskiing in Austria (that interview will follow soon.) But Paul said he had no time for us, since he had to ski powder with a visiting friend and fellow Carinthian, Nikki Sagmeister. We asked where he was planning to go touring, since the last snowfall was a week prior. But Paul answered that he would be resort shredding in Saalbach, since there were still plenty of untracked lines left. Of course, that piqued our interest. As it turned out, Nikki is a friend of Downdays’ own Christian Stadler, and soon we had arranged for a day of powder hunting with Paul, Nikki, Mona, Christian and myself. We agreed to meet in Fieberbrunn, then head over to Saalbach on skis.

We asked where he was planning to go touring, since the last snowfall was a week prior. But Paul answered that he would be resort shredding in Saalbach, since there were still plenty of untracked lines left.

Resort skiing during Carnival holidays is usually not the most clever idea, but the crowds in Fieberbrunn were surprisingly manageable. We quickly made our way up to Lärchfilzkogel, where the Wildseeloder face—the venue for the Freeride World Tour—is in full view. The contest venue itself was untouched—I’m guessing that access is restricted before the event—but every slope around the face was pretty tracked. Every slope? Not quite. A step down from the Wildseeloder, just opposite of Lärchfilzkogel and just a few minutes’ hike away, we spotted an untracked, sparsely treed slope in the shade: the perfect spot for a warm-up run. I stayed at Lärchfilzkogel with Mona to shoot some photos, while the boys hiked underneath the Wildseeloder to the zone. We joined them after their run, taking advantage of the almost untracked powder riding straight down from Lärchfilzkogel. A short traverse brought us back to the gondola. 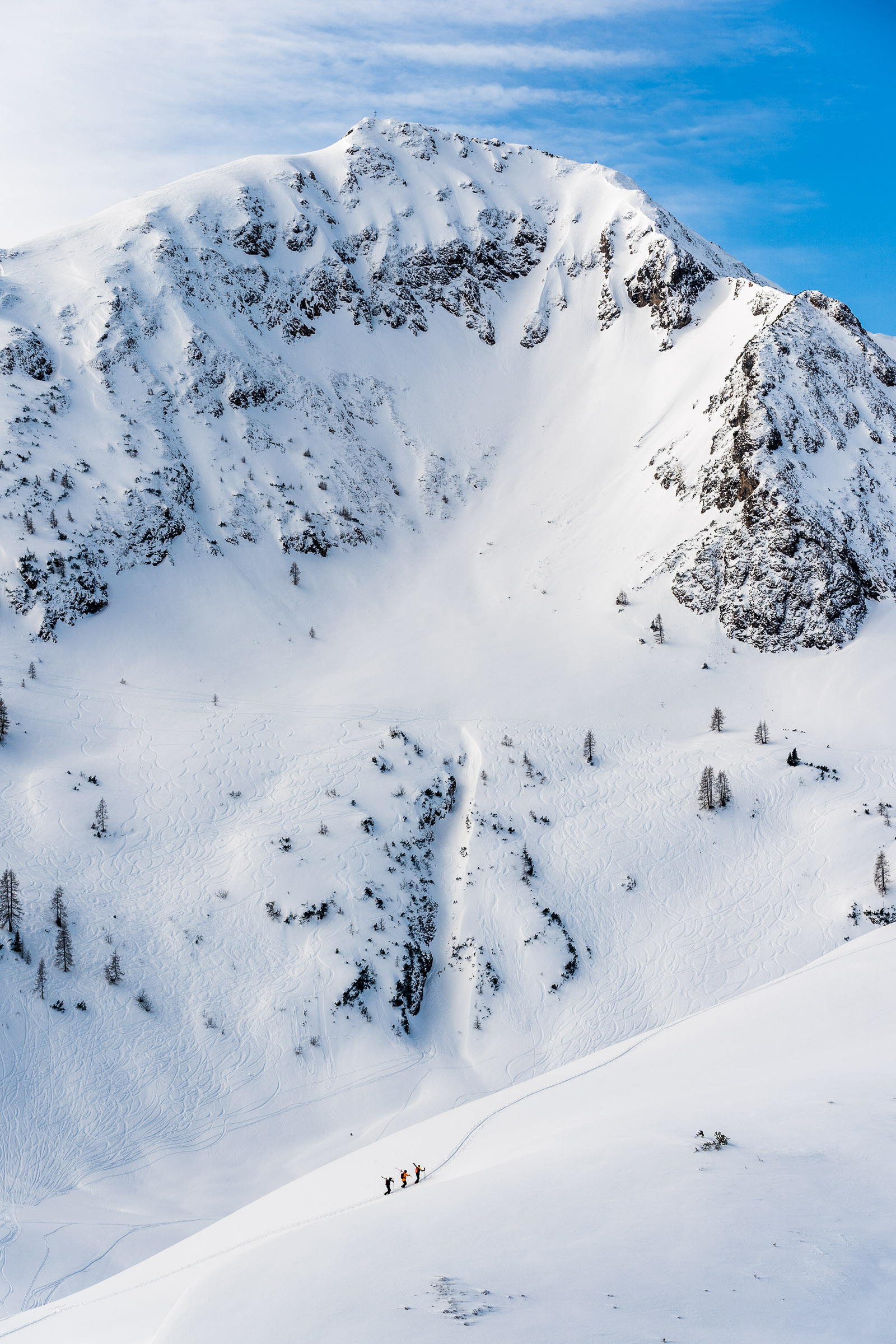 Paul, Christian and Nikki hike for a stash underneath the imposing face of the Wildseeloder. 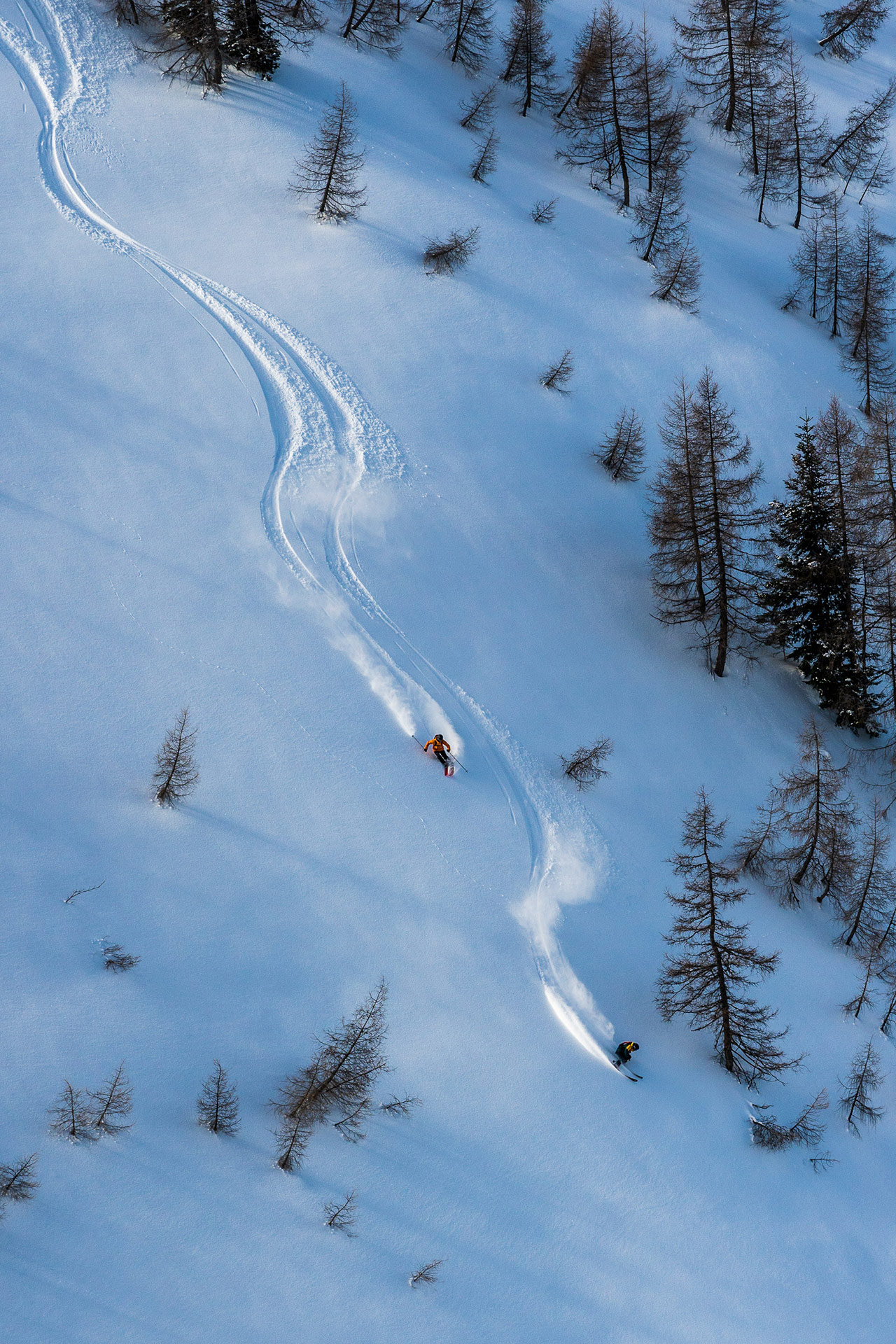 After this great start to the day, we headed towards Saalbach. Saalbach and Fieberbrunn are separated by the Hörndlinger Graben, an alpine valley that’s only serviced by one lift and one piste each from Saalbach and Fieberbrunn, but which otherwise remains a pristine wilderness. From the mostly south-facing Fieberbrunn side Paul guided us to a small side valley that wasn’t really hidden, but nevertheless still mostly untouched, offering some north-facing aspects in the upper part for our next powder run. Not too bad for a week after the last snowfall! We only had started to uncover the goods, though. The opposite side of the Hörndlinger Graben is a long stretch of north-facing slopes separated by gullies and ridges. Some of the slopes that are the easiest to reach from the lifts were tracked, but others that took a bit of navigating at the top and a few minutes of hiking were still showing off a clean blanket of white. This would be our playground for the rest of the day. 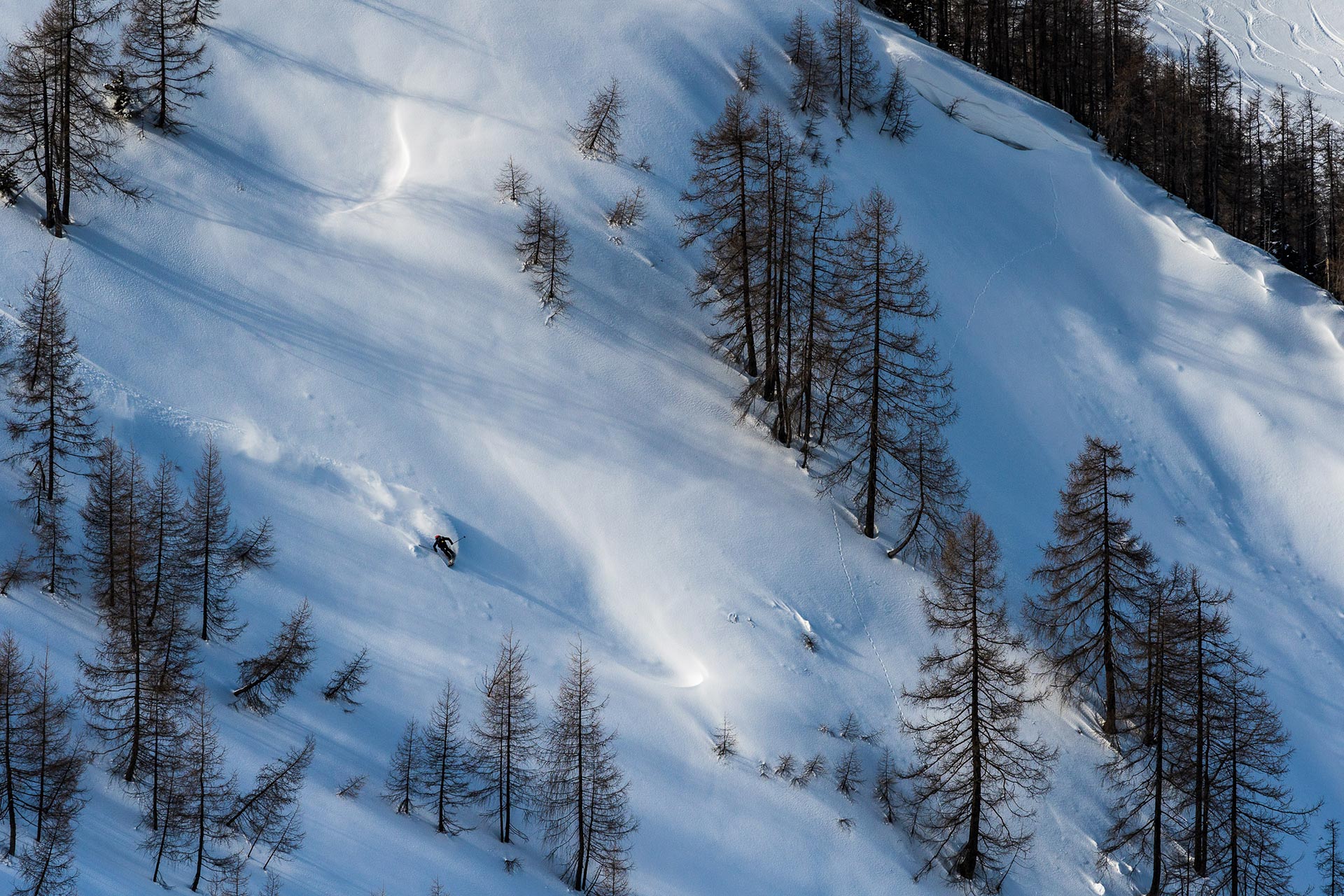 Having a local like Paul Klein with you is a nice way to find to the goods. He's not a bad guy to have in front of the camera, either.

The route out of the Hörndlinger Graben is simply a traverse on a road that’s even groomed for the most part. Saalbach is clearly a ski resort with a heart for freeriders. The only thing to watch out for in a year with low snow levels like this one is the creek at the bottom of the valley, which has to be crossed when skiing from the Saalbach side. In a normal year the creek is usually covered with snow, but this year it’s a good idea to head for one of the several bridges that cross the little stream along the valley floor. Either consult a map (recommended) or trust existing tracks (not recommended) to find your way. The way back to the top of the runs requires two or three different lifts, depending on where you want to start from. A full lap doesn’t take too long, but you should plan for at least an hour per lap, and some planning is recommended, particularly towards the end of the day. Once the lifts are closed, the only way out of the Hörndlinger Graben is a very long, very flat road that would have you walking for hours before the next bus stop. 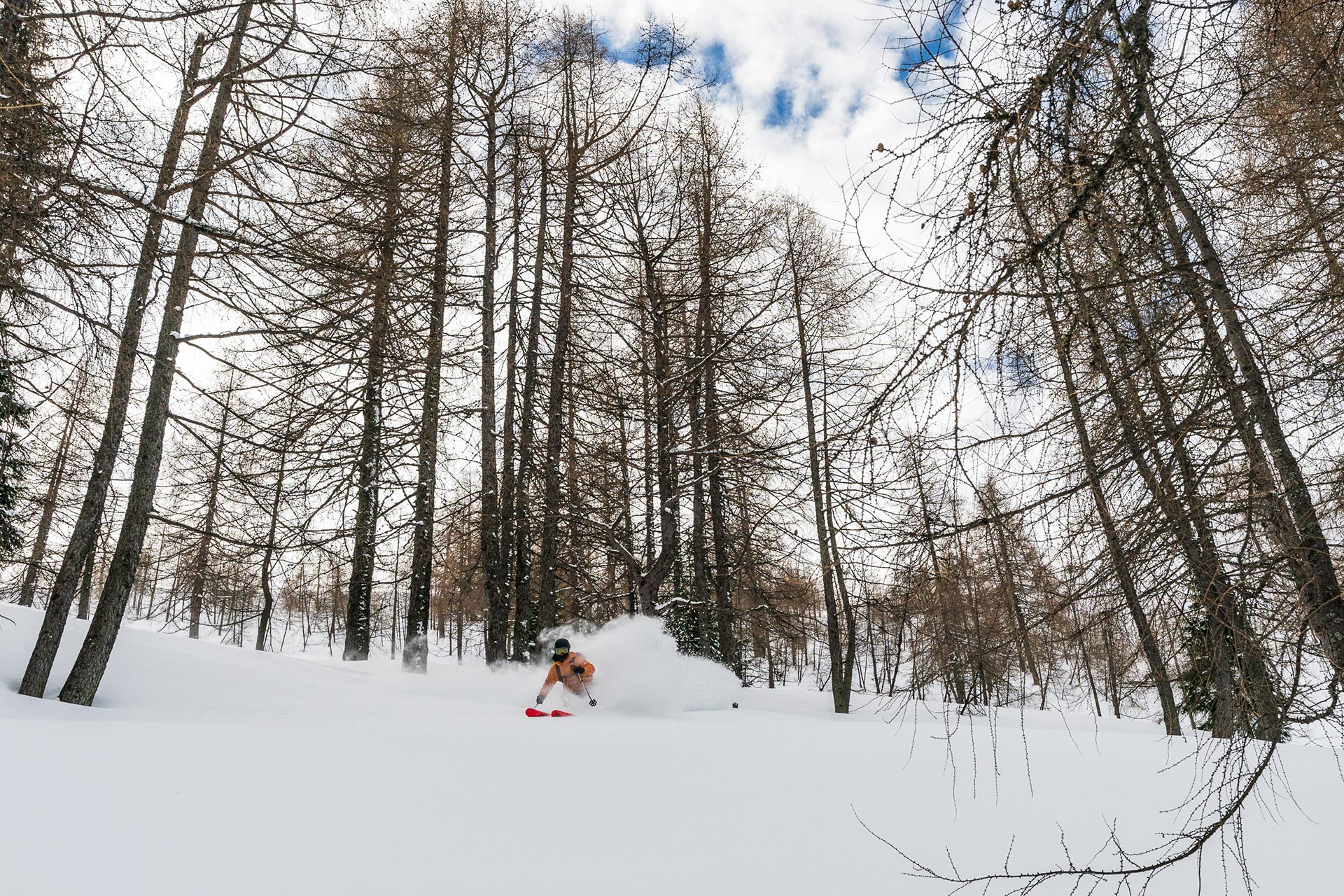 Christian finds solace in the trees.

You might ask, why are we guys giving away this secret? Well, because it’s not really a secret. People have written about the potential of Saalbach as a freeride haven many times before, and next week the FWT will undoubtedly draw the attention of freeriders worldwide to this place once again. Even so, Saalbach-Hinterglemm-Leogang-Fieberbrunn remains a place full of hidden gems. It’s simply a massive ski area, and the majority of visitors seem to have other interests besides skiing pow. That’s not likely to change anytime soon. While places like Kicking Horse (another FWT venue) remain powder havens because they’re so far away from major population centers and offer rather limited tourist facilities, Saalbach seems to remain a powder haven due to the very fact that it’s a very tourist-friendly place, including plenty of lifts in all directions. It’s among a special class of big Alpine resorts that are so well-known as tourist hotspots that they are often overlooked by the freeride crowd. 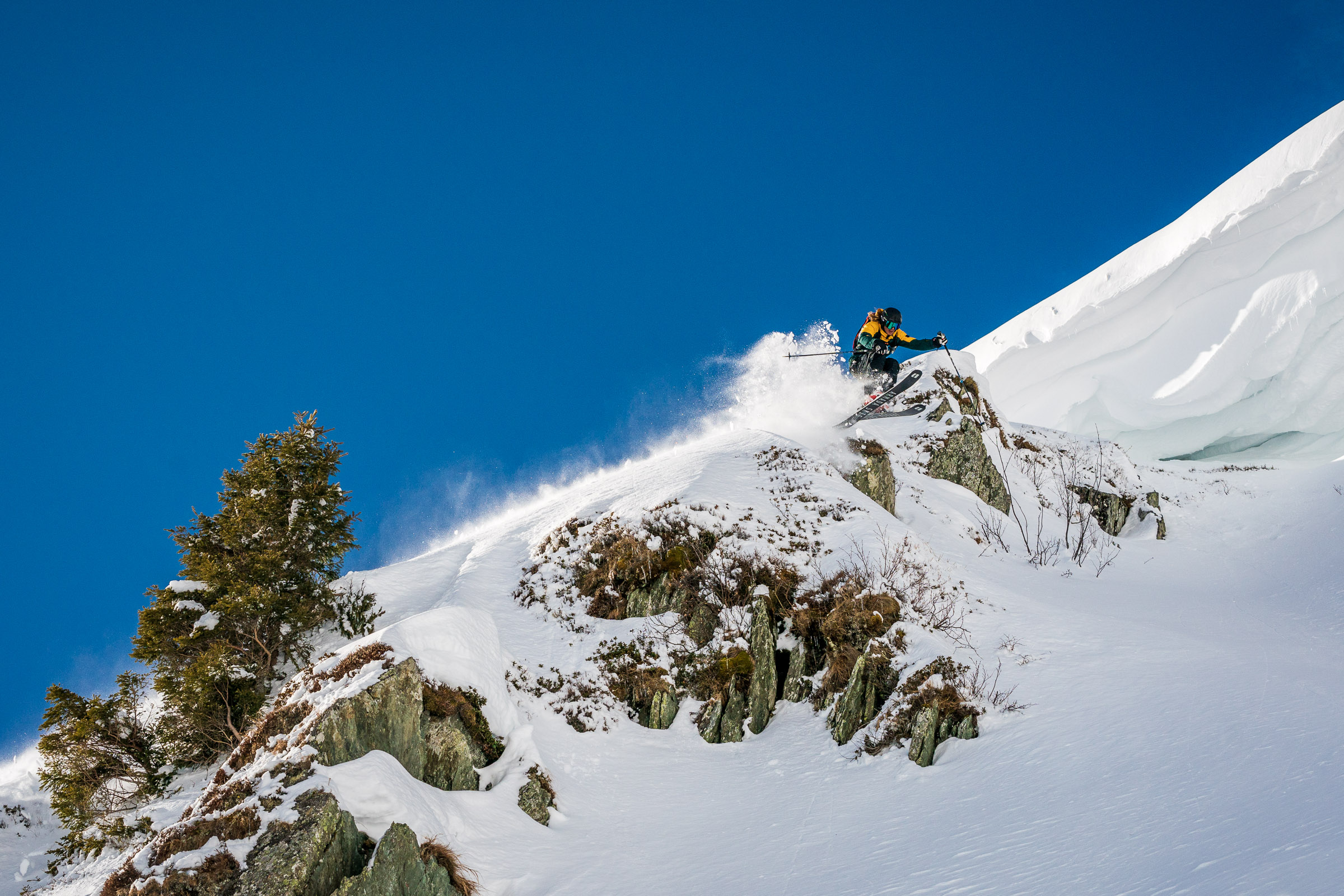 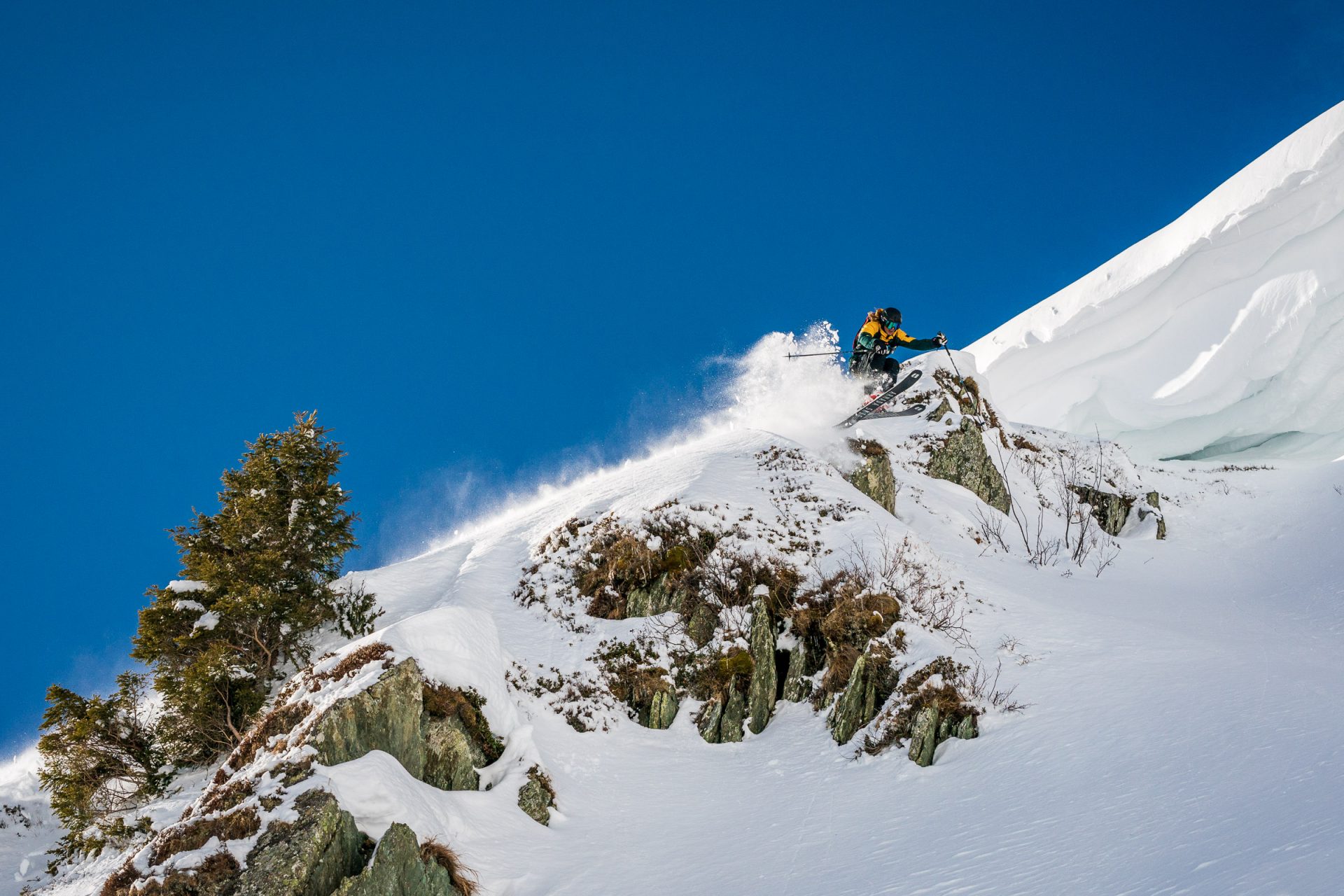 Nikki bags a nice drop on a run in the Hörndlinger Graben.

On our way to the entries of the north-facing runs into Hörndlinger Graben, we traversed the south-facing slopes above Saalbach and Hinterglemm, arguably the heart of this vast ski area with dozens of lifts criss-crossing the gentle terrain. On the other side of the Saalbach valley, we could see further lift-serviced peaks with an abundance of terrain—Schattkogel and Zwölfterkogel—and even from afar, we could see that there was plenty of potential for first tracks left. Paul told us that’s where he usually heads when going for a freeride day. I guess we’ll need to visit again soon.