Will Wesson on skiing more powder than rails, a summer in Switzerland, and plans to make Ian Compton jump through a cactus.


It was a bit of a surprise seeing Will Wesson, one of the most creative and talented rail skiers of his generation, skiing more deep pow than urban metal in this year’s Level 1 Productions movie. But then, Will has always shown a motivation to branch out and explore, evidenced by the increasingly wacky voyages of the Line Traveling Circus and Will’s passion to use skiing to travel the world. I caught up with Will at iF3 in Montreal to recap his unusual season, find out if he’s caught the powder bug, and learn the best strategies for cheap international travel from a guy who’s a master on the subject.

It looks like you skied more powder than rails in this year’s Level 1 movie. What is the world coming to?
Some of that was definitely unplanned powder. But doing rails this year was tougher because not so many of the places where I had specific features scoped out got snow. The East Coast and Boston got snow, but in the Partly Cloudy and Sunny years I hit almost everything I ever wanted to hit around that area, and I was pretty much like, “I’m never going back to Boston again.”

I started the season out in Minnesota and got my first shot in November with that chain-grind quad kink. Then it got warm and didn’t really snow for over a month, and I went on this crazy Asia trip, starting out with a Level 1 trip to Japan and finishing up with some Traveling Circus stuff. It was a weird snow year, not just in the backcountry, but in the cities that I would normally count on having snow.

So is there a subtext here that you’re enjoying powder more than rails these days?
I would say it depends on the situation. But I definitely want to learn more about it and get better at it. I’m obviously not going to be some crazy big-mountain guy anytime soon. But it’s fun to switch it up.

Tanner Hall wasn’t a crazy big mountain dude ten years ago – and look at him now.
Yeah, I think it costs a lot of money and time to get that experience, and I’m never going to fully stop doing urban stuff. So I’d kind of like to just dabble in it and focus on the funky weird stuff, like I do with rails. Similar to what Sämi [Ortlieb] does — backcountry jumps, pow stuff, weird stuff.

I think there’s big potential for people to interpret mountain terrain in new ways, the way they’ve been doing in urban. Backcountry skiing isn’t just about charging crazy lines.
There’s always going to be the most straightforward thing you see from the terrain that everyone’s going to see, like the biggest cliff or the steepest line. But then there’s also the weird way, which is sometimes cool, sometimes dumb, sometimes just different. Like you said, there’s a lot of room. 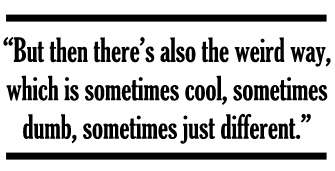 Tell me about your summer in Switzerland.
During the spring I was filming with Sämi in Switzerland for Level 1. It was supposed to be slushy spring park skiing, and then somehow winter continued there and we ended up on top of this crazy mountain. We talked about doing a video series in Zermatt because Sämi had worked there in the past as a shaper in the summertime and had a good connection with the head shaper, and Sämi’s brother David who studies sports-marketing type stuff also helped us out.

I’m not going to turn an opportunity down if I can go somewhere new and ski a cool place. So I ended up in Zermatt in August. We did some park skiing and built some funky features that we were able to construct with the help of Marcel, the park shaper.

So you were involved in the actual construction of the snowpark?
Yeah. Sami was still a part-time shaper while also filming and skiing for the project, so there were some long days for him. He’d film all day, hike a rail, and then go and shape the park. On features that we wanted a certain way, we’d help out. It was never going to be a crazy dream park because some things just take a ridiculous amount of work and time and money. We worked with Marcel to see what his ideas were, blended our ideas into those, and then checked how the weather forecast was looking because it could be dumping snow or it could be melting insanely fast. They don’t use salt there in the summer because of environmental standards so it’s always a challenge: too hot, too cold, too icy. But we had some really good sunny days too.

What’s the summer scene in Europe like compared to North America?
It was actually perfect timing since this was one of the worst snow years in North America for summer skiing. I didn’t feel so bad leaving Mount Hood, where I usually spend the bulk of my time. It’s pretty similar in some ways – you have to get up a bit earlier because it’s going to melt fast. But then, it can get cold and snow any day. Also, way less people. Mount Hood is packed because everyone knows that’s the spot, and there’s all the camps there. There are camps in Europe, but not as many big organized camps with their own features and parks.

Aside from skiing, did you enjoy living in Switzerland?
Oh yeah, it’s pretty cool to live in a different place for a good chunk of time. I should probably be a lot better at Swiss German by now. In Zermatt it’s Valais Swiss German too, a specific dialect that apparently sounds extra crazy according to Sämi. But lots of guys there are from the UK and other places, and everyone knows a bit of English. You ride the T-bar with somebody and they could be from Russia, Italy, Switzerland… all over Europe basically.

So, TC in its eight year—the Traveling Circus lives on forever!
Hopefully. I don’t want to get another job. We’ll just be driving around in twenty years like weird old crazy ski bums.

This year we’re doing a bit of a different format. There’s going to be three, maybe four “megasodes,” 15- to 20-minute long mini-movies or shorts. The first one is from Korea and China. That will be the last TC episode filmed and edited by Shane McFalls. He’s been the mastermind behind all that since the beginning, so it’s kind of sad. He’s moving on to fatherhood. But we now have Jake Strassman, a mastermind behind other projects like “Adventures in Transition” and all the Windell’s videos—if you wanted to go to Windell’s in the past ten years, it’s probably because you watched Jake’s video. We filmed the second episode with him in Switzerland and Italy, which overlapped with the Level 1 spring trip. Trip comboing: just go to a region of the world and then stay there for a long block of time, and not buy more than one big plane ticket. A good strategy.

What’s the next exotic destination going to be?
The next destination for Traveling Circus is up in the air. Hopefully it snows a ton in the Pacific Northwest this early season and we can do something there or in BC. We’ve never really filmed in BC besides summertime in Whistler, even though it’s one of the greatest places to ski in the world. We still haven’t really taken advantage of that in the winter.

Another idea is some places in Colorado that nobody knows about unless they’re from Colorado. Not just Keystone or Breck, but the whole rest of the state—there’s mountains and snow everywhere. It already snowed in September, and there’s a good chance to have some good early-season stuff there.

We also really want to go to the Southwest—at least I do. Arizona Snowbowl, maybe even to Mexico because it does snow there—there are huge volcanoes. It would be hilarious to drive the van there if we didn’t get in some sort of trouble.

It’s definitely a good strategy to remain inconspicuous while traveling in Mexico.
Yeah, we have a pretty identifiable van, and it could seem like a good thing to rob. Maybe we can just paint it real quick or something. We’ve always wanted to – it’ll probably never happen – but we always wanted to jump through a cactus, and have Ian [Compton] do it, because he’s always getting stuck in a tree.

Anything else you want to mention?
Thanks to everyone who helped me get where I am, mainly my parents and friends. Definitely some sponsors—Line Skis has had a big part in Traveling Circus and me putting off real life for as long as I’ve been able to. When we started, Andy and I said we’d do this for a year because we liked making videos, and we wanted to go to some new resorts in the West that we’d never been to. That was eight years ago, and now we’re plus one giant van and a lot of cool stories and experiences. So thank you Line Skis. And thank you Internet – we definitely wouldn’t exist without the Internet.