From March to May - our recap of the biggest happenings in freeskiing last season.

Whew! We’ve reached the third and final installment of our 2015/16 Season Review. If you missed them, here are links for Part 1 and Part 2. Part 3 picks up the thread in March 2016.

On March 9 the Freeride World Tour returned to Fieberbrunn, Austria for the crucial third stop of the tour. On the tricky Wildseeloder face competitors received their final chance to qualify for the two remaining stops.

In past years the Fieberbrunn stop has presented a challenge for the Tour. In 2015 the event was relocated to Kappl, then finally to Andorra due to poor snow conditions.  This year sketchy snow conditions caused trouble again with slabs breaking off throughout the contest, washing at least one competitor clean off the face. With line choice and slough management skills in the foreground, Norwegian Dennis Risvoll and his pair of backflips took home the men’s top spot. Italy’s Arianna Tricomi took the women’s honors. Watch the full replay here.

Europe’s longest-running, biggest and best open slopestyle event continued to attract the cream of the crop to Laax. This year the tradition continued with well over a hundred riders fighting through the qualifying rounds, into the semi-finals and (hopefully) on to the finals.

In the women’s field, Kelly Sildaru picked up yet another victory to add to the “Winter of Kelly,” stomping forward and switch 900s and greasing rails effortlessly on her way to the win. On the men’s side Gus Kenworthy stomped a near-perfect run, including a huge switch 720 on the bottom quarterpipe feature, to claim the win.

Meanwhile, over in Les Arcs, France, a small crowd of freeskiing’s most stylish riders gathered for quite a different event: the 2016 B&E Invitational. It was a celebration of all things style as these hot riders took to what’s doubtless the most creative freestyle course to be found in skiing these days. Over the weekend the B&E crew sessioned the “skatepark out of snow” to their hearts’ content. In the end, two riders picked up the event’s top honors: Henrik Harlaut with Best Style, Best Trick and Best Overall, and Candide Thovex with Best Line and Public Choice.

In the Austrian resort of Saalbach (a part of the aptly named Austrian mega-resort, Skicircus Saalbach Hinterglemm Leogang Fieberbrunn — say that five times fast), the Atomic team convened for the second edition of the Blank Canvas project. The idea behind Blank Canvas is pretty simple — push up a big pile of snow, and then let the riders go crazy with their ideas for a week. The 2016 Blank Canvas was as innovative as ever — check the video for proof.

For the fifth year running, the queens of freeskiing returned to their stomping grounds of Serfaus-Fiss-Ladis for another go at their always-innovative castle feature. This year’s Queens castle featured five takeoffs on the main jump, a “snow rainbow” or “drawbridge” centerpiece on the accompanying jib feature, and plenty of options for the girls to get rad.

In the closing Big Air contest, young Swiss shredder Giulia Tanno snagged the win with a clean switch 1080 tail grab. Our coverage took a new approach to reporting on the event with a feature on the camerapeople of Nine Queens, as well as “the view from the drop-in” — a look at what goes into the event behind the scenes. Of course, all the shred action was well documented in the highlight reel.

In yet more event news, on March 18 Øystein Bråten snagged the win at the final stop of France’s signature slope & pipe tour, while the women’s podium was claimed by — yes, you guessed it — Kelly Sildaru. Watch the top runs here.

Though a problem with a satellite ultimately kept the livestream broadcast off the air, the Alaska FWT stop went off on March 22 with no other hitches. Tour rookie Logan Pehota claimed his first tour-stop win with a masterful blend of expert big-mountain charging and freestyle flair, slowly creeping up behind Loïc Collomb-Patton’s point lead. Austria’s Eva Walkner grabbed the women’s top spot with her tried and true method: charge hard and go big.

Nico Zacek’s now-legendary Suzuki Nine Knights event took a tangent this year. Instead of building the “standard” Nine Knights mega-castle, Nico and team had a particular goal in mind: building the world’s biggest and best hip feature ever, and breaking the (unofficial) world record hip airs in both skiing and snowboarding. No big deal, right?

It all came together at the unassuming little ski resort of Watles in Italy, where a towering 10-meter tall double-sided hip with multiple takeoffs became the scene of yet another Nine Knights massacre — this time with a couple of world records as loot for David Wise (ski) and Christian Haller (snowboard). Meanwhile, Italian superhero Christof Schenk doubled and tripled his way to victory during the jam-session “contest,” while the rest of us got cricks in our necks from watching these guys fly halfway to the moon and back. The Perfect Hip was a session that won’t be forgotten anytime soon — at least, not until the next Nine Knights feature arrives.

As tradition demands, the Freeride World Tour returned to the legendary Bec des Rosses face in Verbier, Switzerland to close out the tour with the Verbier Xtreme event. Unfortunately, poor visibility kept the ski men from taking their runs, although the snowboarders and ski women were able to pack in their contests while the weather was still decent. Jackie Paaso took home the women’s win for the day, while Eva Walkner’s second-place finish was more than enough for her to clinch the overall FWT title for the year. On the men’s side, points leader Loïc Collomb-Patton took home his second consecutive FWT overall title without having to ski a single turn in Verbier. And if the weather put a damper on the ski action somewhat, our photo gallery from Verbier showed that the legendary on-hill party was immune to any and all damping attempts. 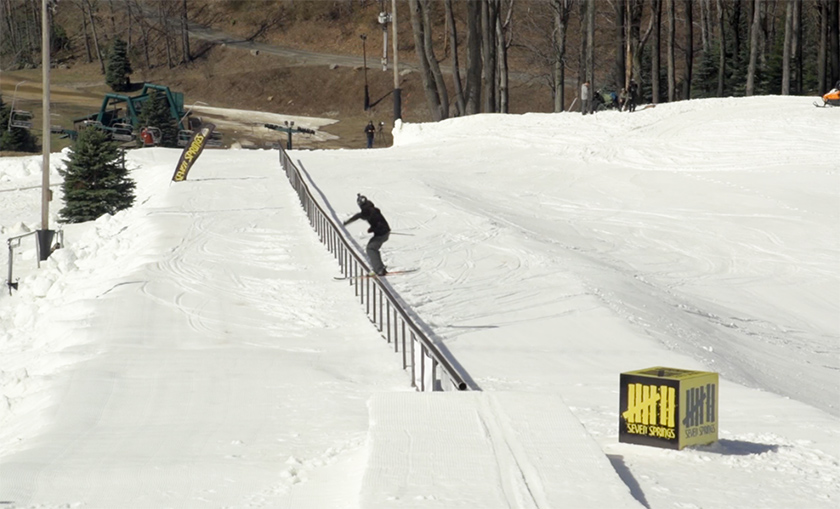 In other world-record news, Tom Wallisch dropped a surprise banger at the end of April: a world-record 424-foot railslide that you have to see to believe. Tom and his team put in serious work at his home resort of Seven Springs to make this improbable dream a reality. With the afterbang on point, of course.

In Oregon, the cult-classic spring gathering called the West Coast Session celebrated both its tenth-year anniversary and its final event during the first week of May. Riders from across the globe gathered for one last weeklong throw-down at Mount Hood, Oregon, complete with a 27-meter money booter, a 30-meter down-flat-down to S “challenge rail,” a backcountry feature, and daily challenges to keep all comers busy. All in all, it was a fine way to cap off ten years of WCS.