Lily Bradley on the way to her first FWT win. Photo: Dom Daher/FWT

The third stop of the 2022 Freeride World Tour went down last weekend in the powder mecca of Kicking Horse Mountain Resort, Canada.

The stakes for the riders were already high coming into the sole North American tour stop, with the results from Kicking Horse helping to determine who would make “The Cut” and advance to the two-stop tour finals in Fieberbrunn and Verbier and qualify for next year’s tour, and who would be relegated back to the qualifiers.

On top of this, Mother Nature decided to up the ante on the drama, blasting the region with winds up to 115km/hr days before the contest. The storm damaged the Tour’s broadcasting equipment and rendered the planned contest face, Ozone, unrideable. But thanks to a last-minute venue change and an all-night effort by the FWT team to relocate their entire infrastructure to a new location, the contest was able to be held as planned. The new venue, called T1 South, also offered us a sight rarely seen on the FWT: athletes riding on an already skied-out slope, rather than an untouched face. 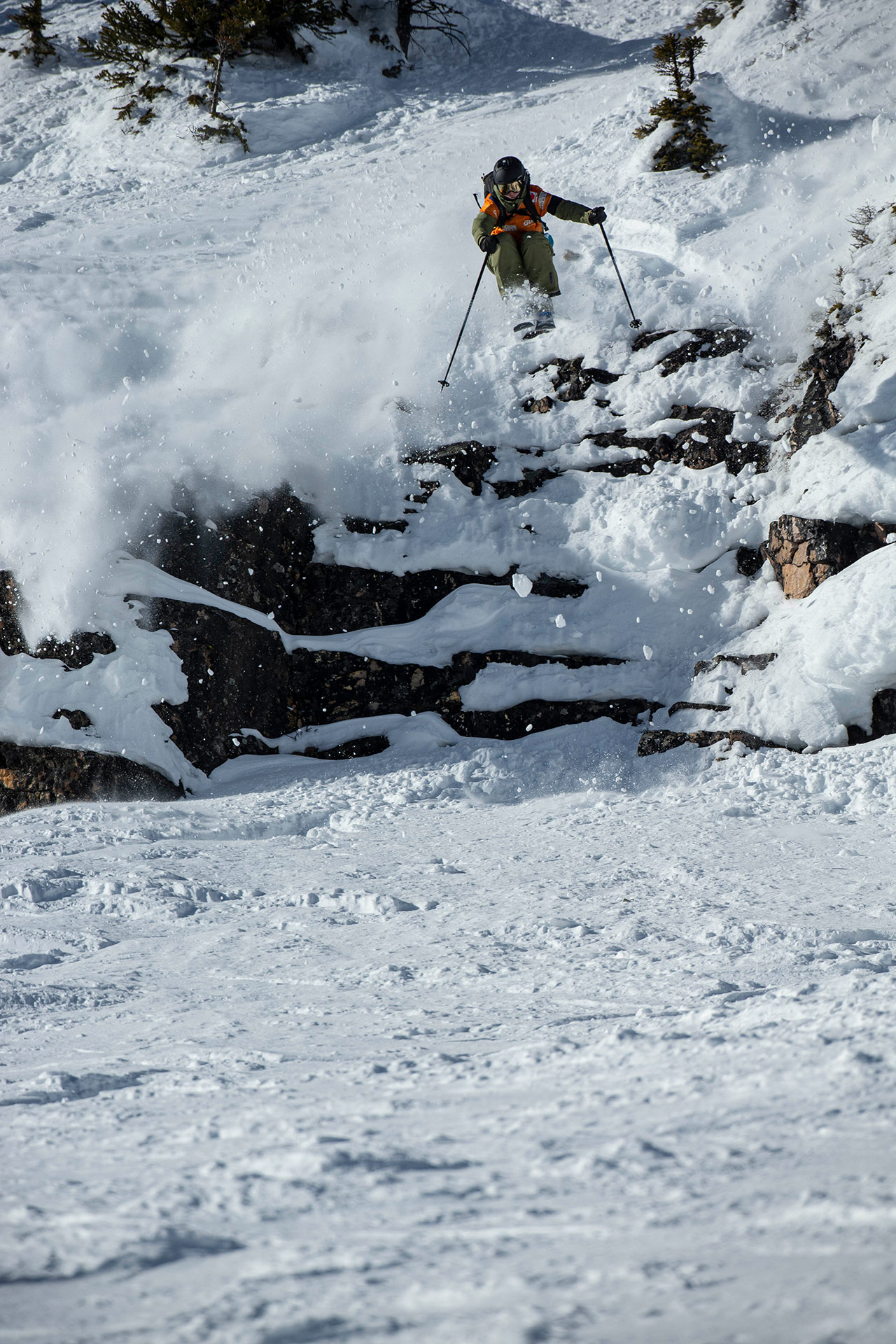 In the ski women’s field, Lily Bradley kicked off the contest with a bang. Vibing in the start gate with a prominent “I (heart) MILFS” sticker on her helmet, Bradley linked three drops through the top cliff bands, then stuck a few more airs for good measure on her way to the bottom. Her score of 80.67 would end up carrying the day.

Second place went to Jess Hotter, who skied fluidly through the top cliffs before punching a big air clean, then adding a stylish japan grab on an air in the middle section. Pigtails erect as always, Olivia McNeill completed the podium in third place. She chose the most creative line in the women’s field, taking a billygoat line through the top cliffs before lining up a sizeable drop to rider’s right. She then traversed cross-court across the face, linking airs through the middle section. 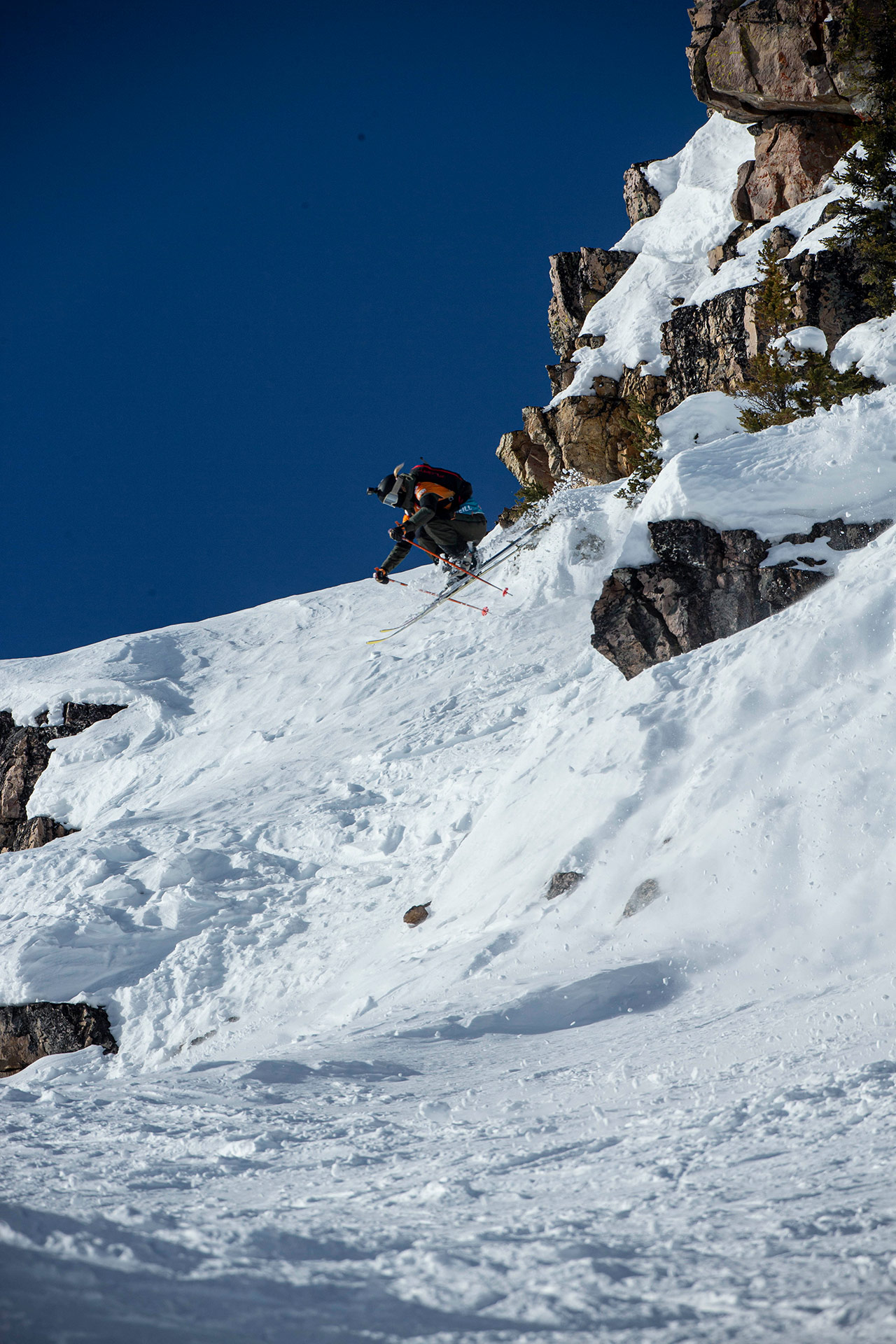 Olivia McNeill in action. The pigtails help her aerodynamics, like fins on a plane. Photo: Dom Daher/FWT

Already qualified for the finals, points leader Hedvig Wessel took a more conservative approach, taking an air to skier’s left off the top before skiing fast and technically sound through the rest of the venue. Defending champion Elisabeth Gerritzen showed off her Verbier pedigree, skillfully navigating through the top cliff bands into a big, clean drop, then adding another air before straightlining out the bottom for one of the day’s fastest runs. Following Gerritzen, Juliette Willmann stomped one of the face’s biggest airs, then added several more for good measure.

Sybille Blanjean got a bit backseat after her first air, but managed to maintain control even while hurtling through the next cliff band, a feat of strength and composure that was rewarded by the judges. Lexi Dupont lined up two big airs off the top, then pounded out several more through the middle. Unconvinced by the effort, however, the judges slipped her into sixth place. 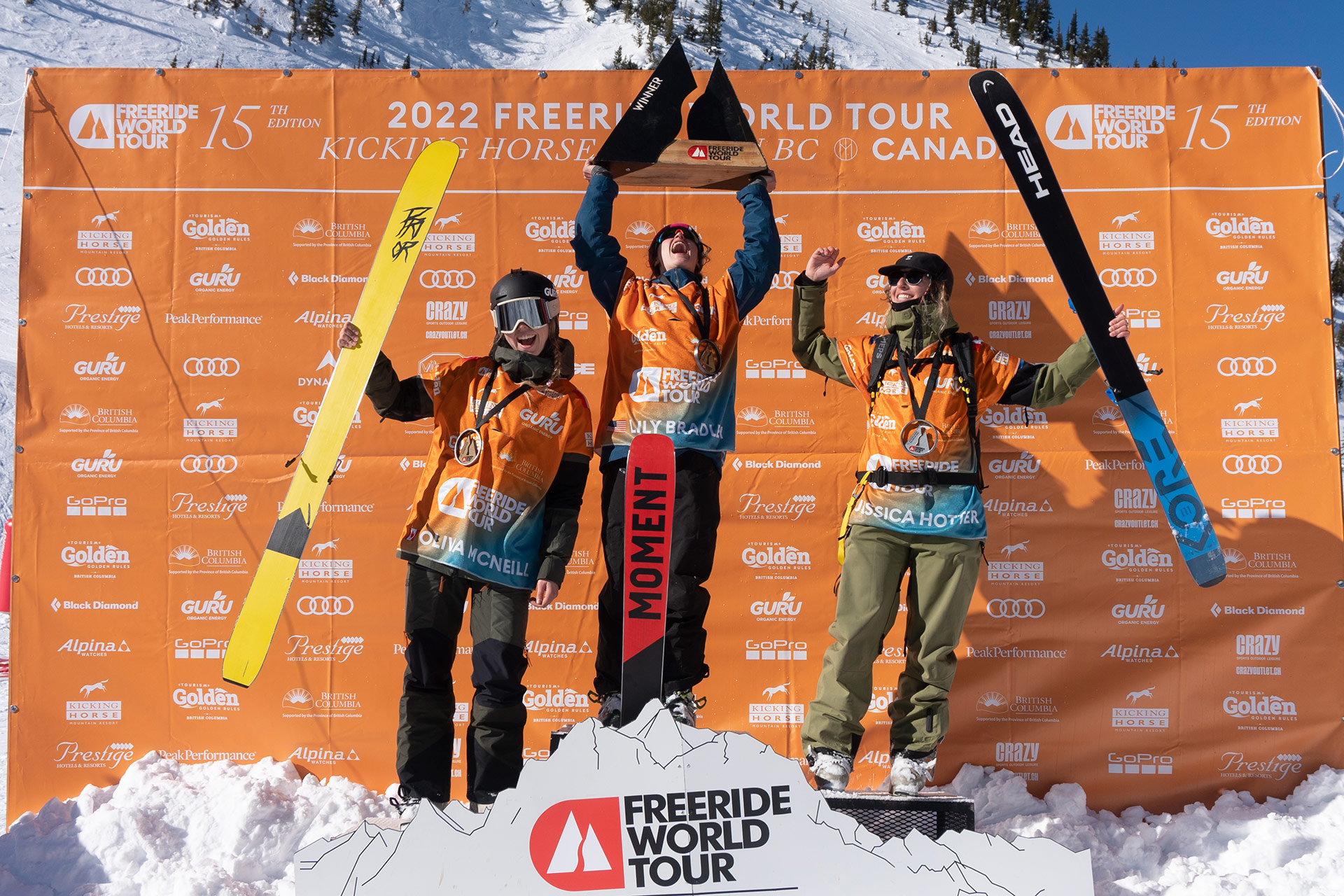 On the men’s side, Kristofer Turdell took third place with with a run that balanced big-mountain ability and freestyle prowess. “Turtle” bagged a beautiful untracked shelf off of Start 2, gapping over the traverse track and straight into a massive backflip, then lacing a technical drop at skier’s left to close out his run. Bouncing back after a big crash in Andorra, Max Palm once again stomped a double backflip—which won him the stop in Baquiera Beret—then stomped the same bottom drop as Turdell to claim second place.

The top spot, however, went to Maxime Chabloz, who looked more like he was skiing a backcountry freestyle course than a freeride contest. Chabloz stomped a clean left 360 safety, straight into a flawless cork 720, right into another 360, then launched one of the day’s biggest backflip on a cross-court hit to finish his run. It was the tour rookie’s second victory in a row after winning the Ordino-Arcalís stop, a feat rarely seen on the tour.

Other notable runs among the men: Andrew Pollard set the pace for the day, hitting a perfect transition off a big cliff and nailing a large and in charge cross-court 360 before pinning out the bottom of the venue. Kevin Nichols also bagged a solid run, opening up the bottom drop that would help Turdell and Palm get to the podium. Maël Ollivier sent probably the biggest cliff drop of the day, and Cooper Bathgate send the biggest cliff trick with a hand-drag 360. Jamesa Hampton, meanwhile, took a different approach, skipping the tricks and instead going fast and furious on one of the quickest top-to-bottom runs of the day.

As always, there were a few heartbreaks as well. Craig Murray was on his way to a podium run, tossing 360s down the venue that got bigger with each hit. But he sent his third air, a huge flatspin 360, just a bit too big and couldn’t hang onto the landing. Carl Regnér Eriksson and Austrian rookie Valentin Rainer also crashed out, Regnér on the landing of a lincoln loop, Rainer after seemingly stomping a huge 360 clean.

It was a freestyle-heavy showdown in the Canadian Rockies—one that will certainly have armchair critics like myself wondering if the judges favored the freestyle trickery a bit too much in a contest that was more backcountry slopestyle than freeride. However, it’s clear that the riders need to match their approach to the terrain that they’re given, and the T1 South face at Kicking Horse certainly offered the perfect venue for freestyle-oriented runs. And when they’re stomping double backflips and cork 720s off natural hits, it’s hard not to reward them. Congratulations to the winners, and let the salty “it’s called freeride, not freestyle” bicker-fest commence! 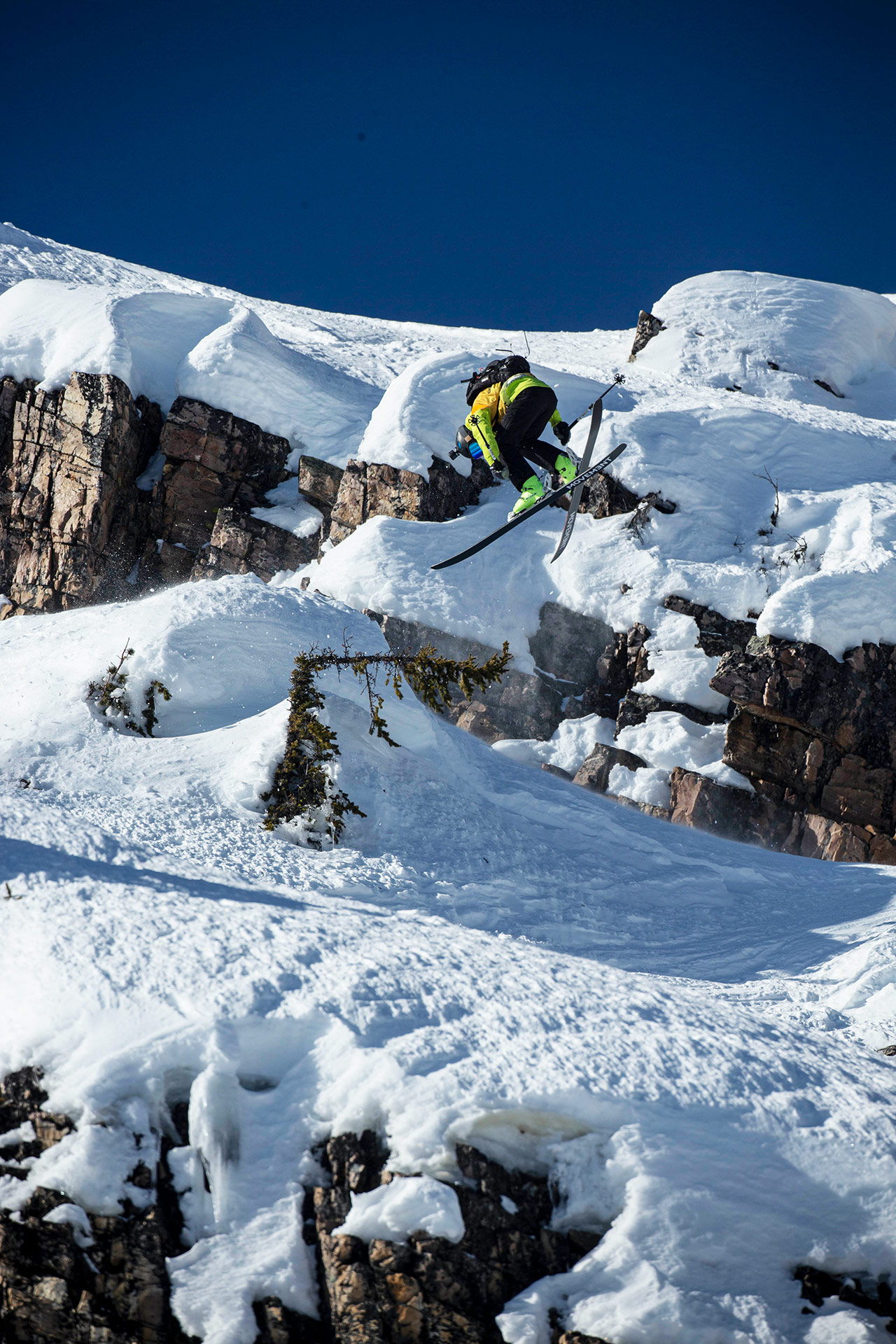 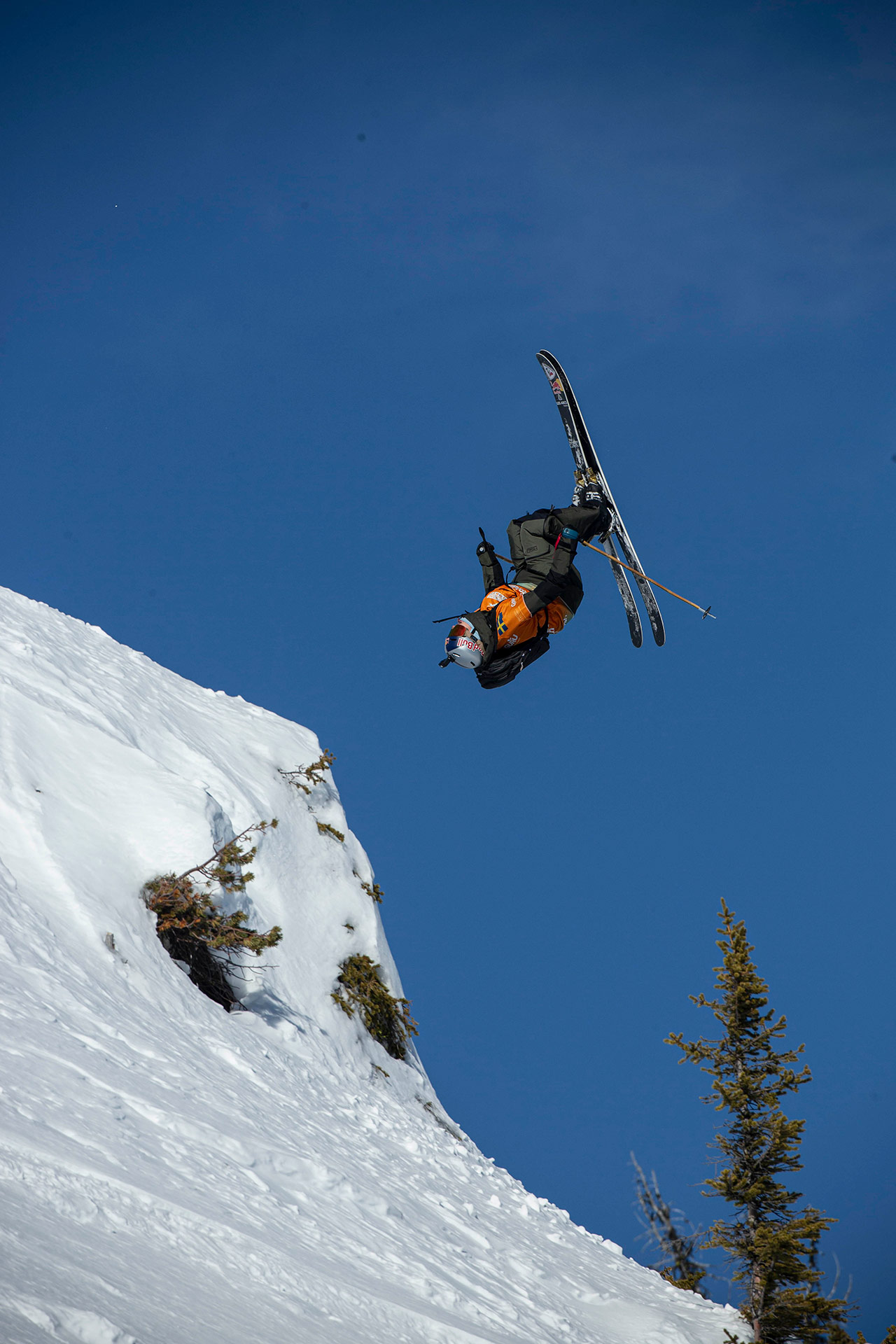 Max Palm can apparently stomp double backflips at will. He must be stopped before achieving world domination! Photo: Dom Daher/FWT 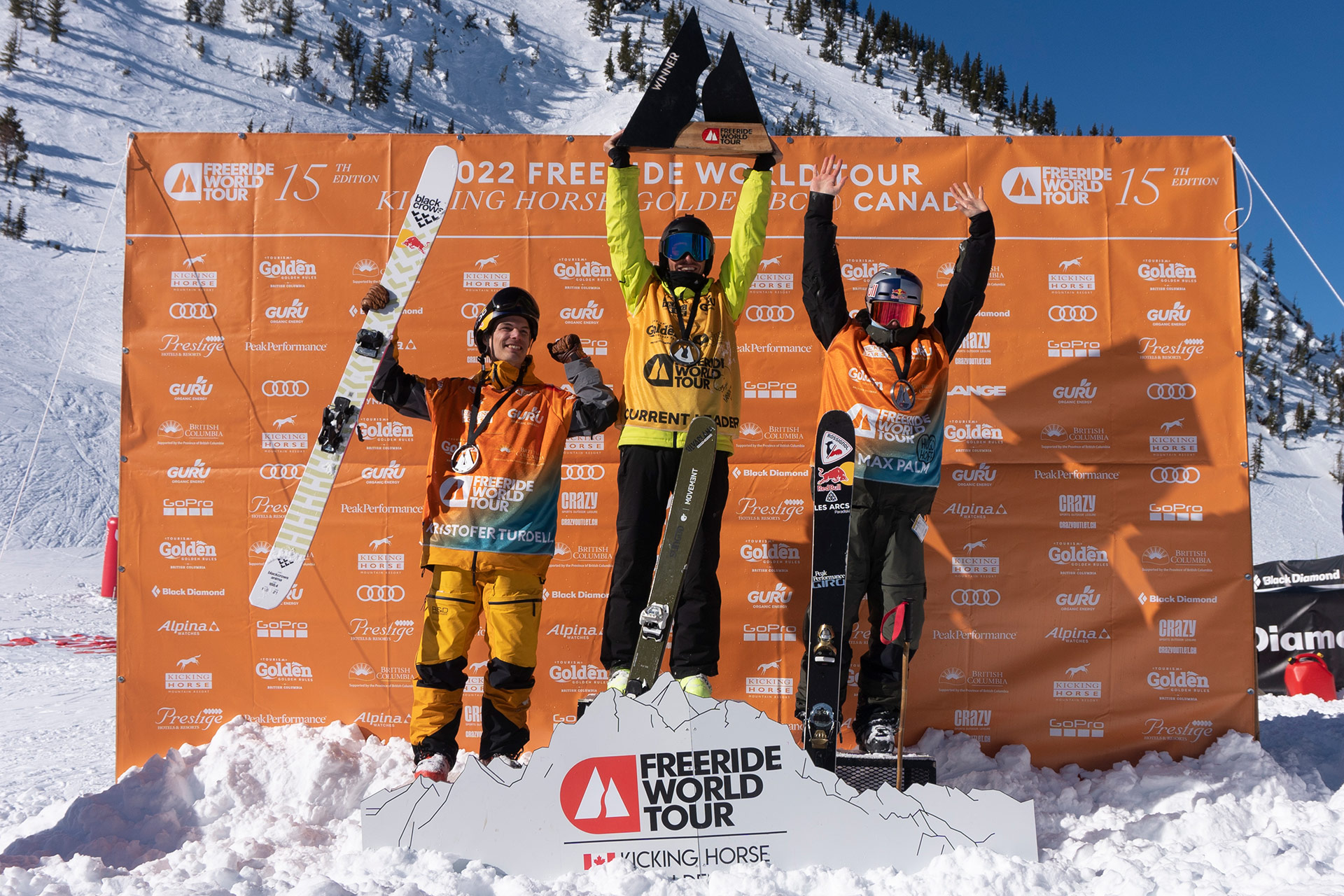 The FWT now returns to Europe for the two-stop tour finals in Fieberbrunn, Austria and Verbier, Switzerland. You can find the full schedule, as well as see who made the cut for the final stops, at freerideworldtour.com.