Jump in the heli with us and take a ride to watch the Skiers Cup Backcountry Slopestyle go down in Andorra. 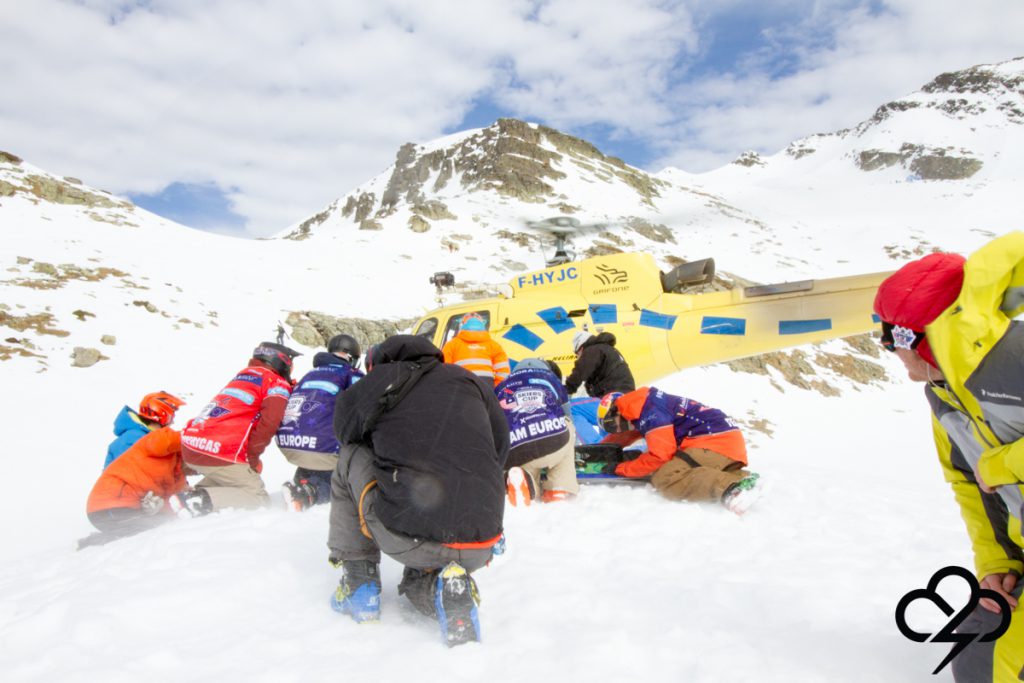 We’re milling around at the bottom of the Backcountry Slopestyle course at the 2016 Mona Banc Skiers Cup, and the skiers besides Parker don’t seem all that hyped on the goings-on. High clouds and rising winds have put a momentary damper on things after the morning’s excitement of getting helicoptered up to to the event venue high in the Val de Ransol, across the road from the biggest ski resort in Andorra, Grandvalira.

No doubt, the springlike, low-snow conditions currently holding here in Andorra aren’t the best for the Skiers Cup riders, who’ve been spoiled by excellent snow conditions the past several years in Zermatt. But despite some negativity among some of the riders, who’ve described the conditions with adjectives ranging from “sub-optimal” to “catastrophic”, the sun has been doing a relatively good job of warming up the firm snow and providing adequate corn conditions for the two-day competition to take place. All in all, it hasn’t been half bad—and Parker is tired of waiting around.

“The conditions aren’t great, but they’re the same for everyone,” he says, chomping at the bit. “I’m ready to go right now.”

The weather had been fine earlier this morning as the skiers arrived to scope out the setup created by OG French freeskier Arnaud Kugener and a team of shapers from the Grandvalira snowparks. Kugener, who’s busy putting the final touches on the course’s biggest kicker, says he’s been up here for the last few days with his crew. 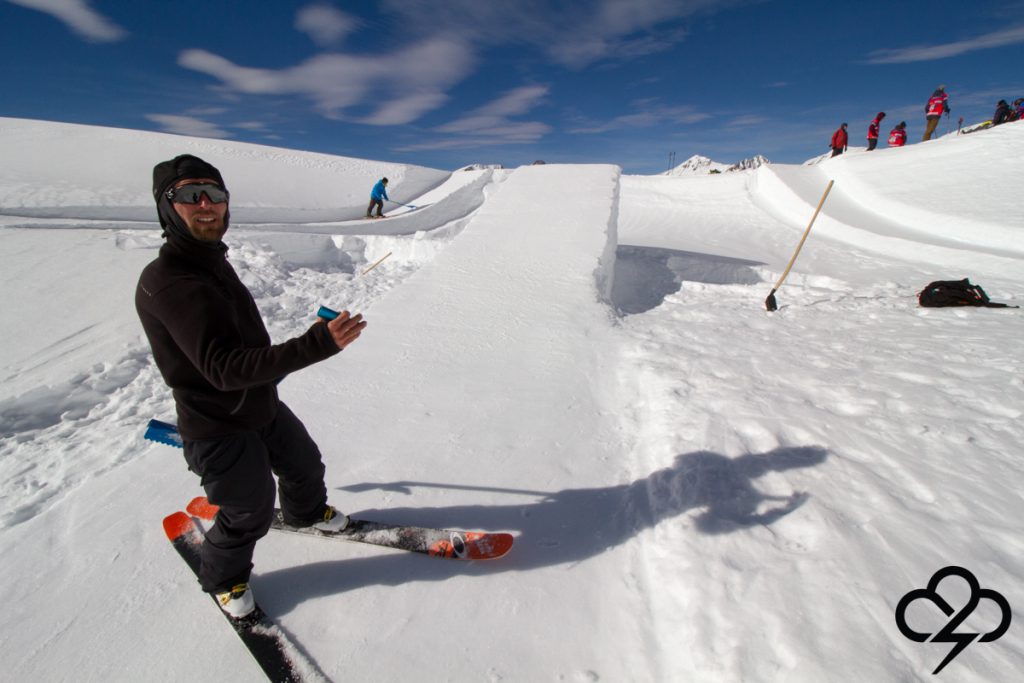 “I started working alone, finding the face and the right place for all the features,” says Kugener. “Then we had a few nice days of big blocks, shoveling all day in the sun.”

But now after all the sunny weather of the past few days, conditions have turned on us for the moment, and we’re in a holding pattern, waiting for that sun to come back out and soften the snow again. The atmosphere at base camp remains lively—a high-level barbecue session is underway with all manner of tasty delicacies on the grill. The BBQ bosses, an off-duty Freeride World tour technical director and a ski patroller, hold up spears of spiced meat and grilled peppers for all takers. The skiers build a snow shelter at the bottom of the venue and congregate to discuss the course, scowling at the clouds overhead. 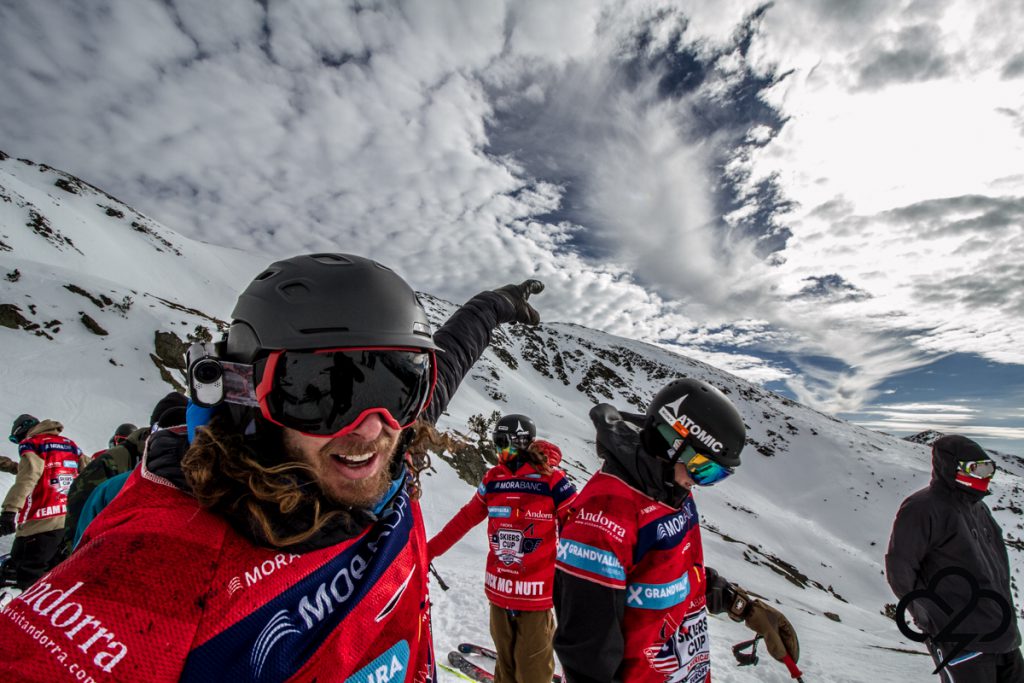 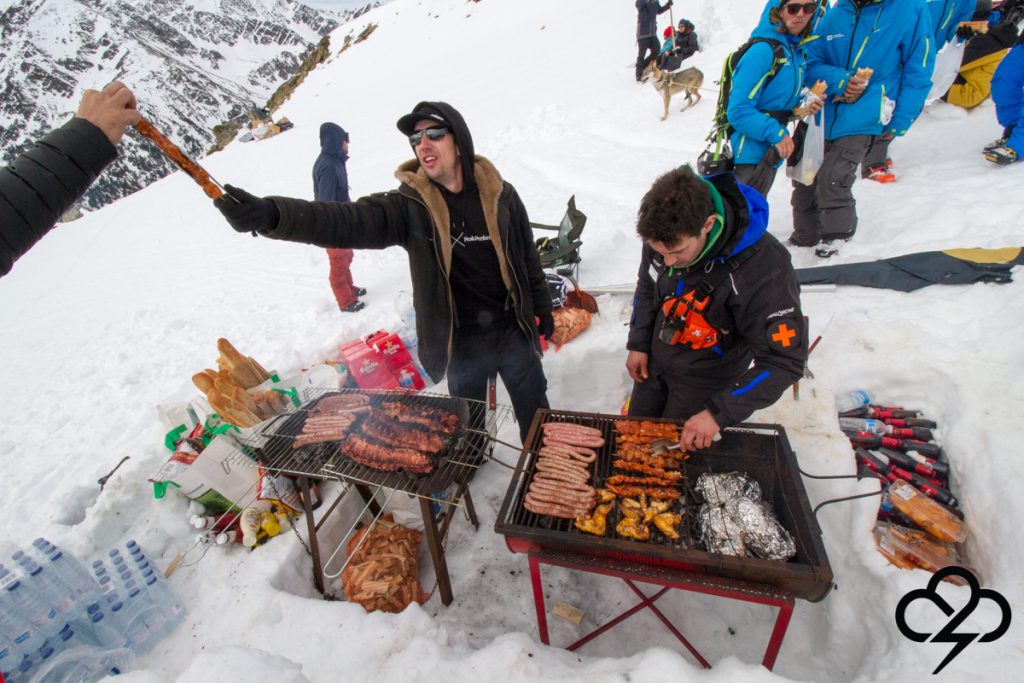 “Just hold it up in the air, and somebody will grab it.”

After waiting long enough for the weather to improve, we slowly start moving towards a start—and right on schedule, the weather starts to come around: the clouds blow out, the winds die down, and a warm, spring-like Andorran sun begins its work softening the landings of this spring-like jump course.

The skiers take a couple warm-up laps, figuring out their lines and the speed between the jumps, and all of a sudden it’s on—sixteen of the world’s top skiers going head-to-head in two different runs. 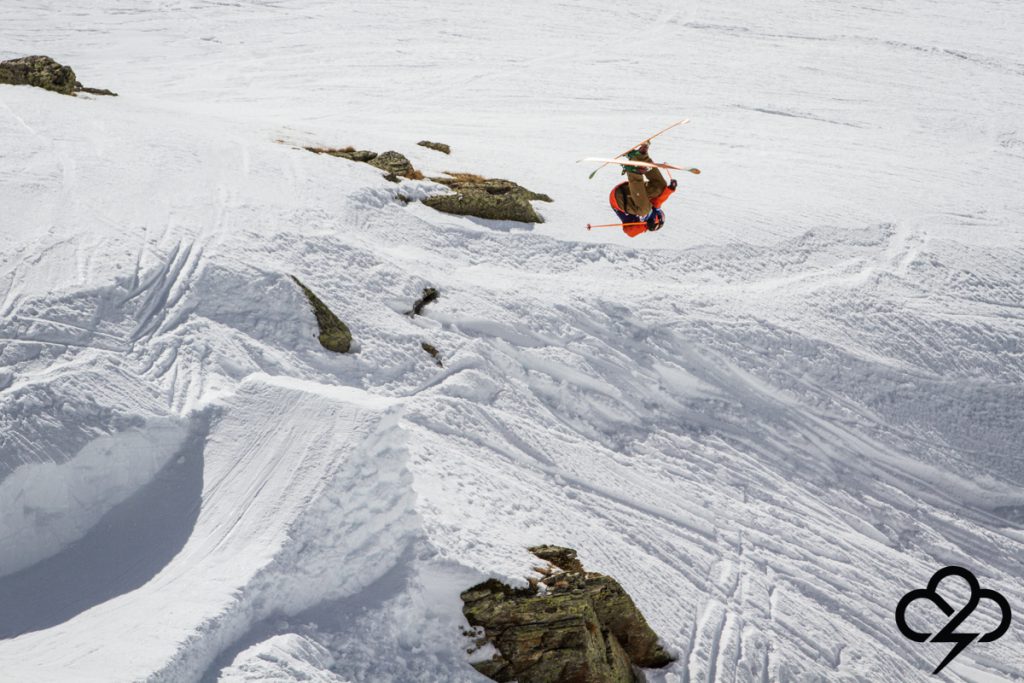 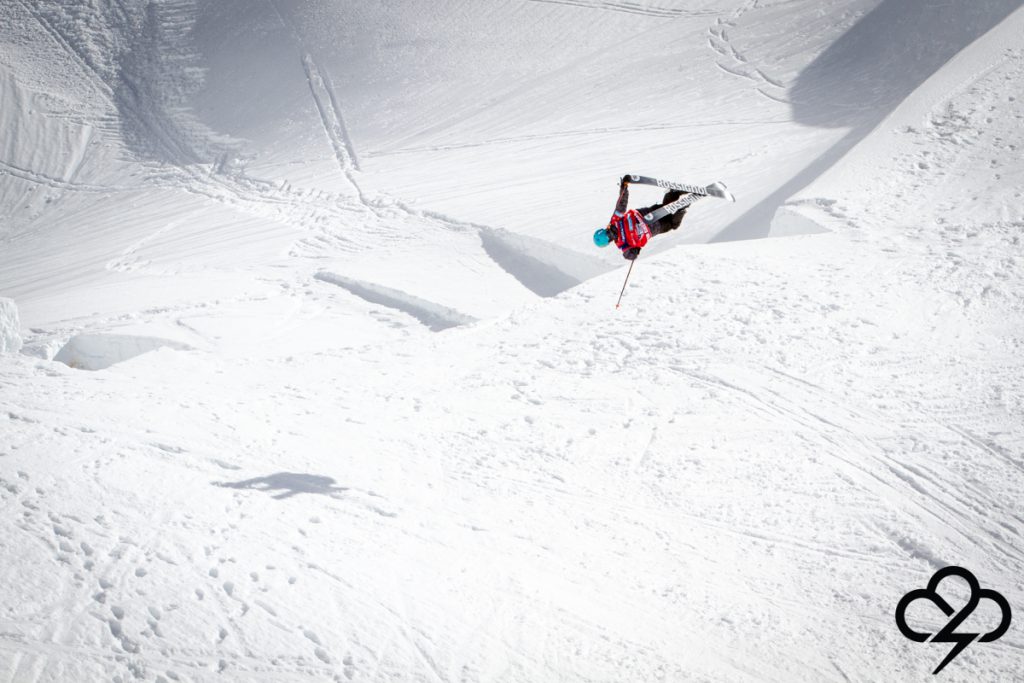 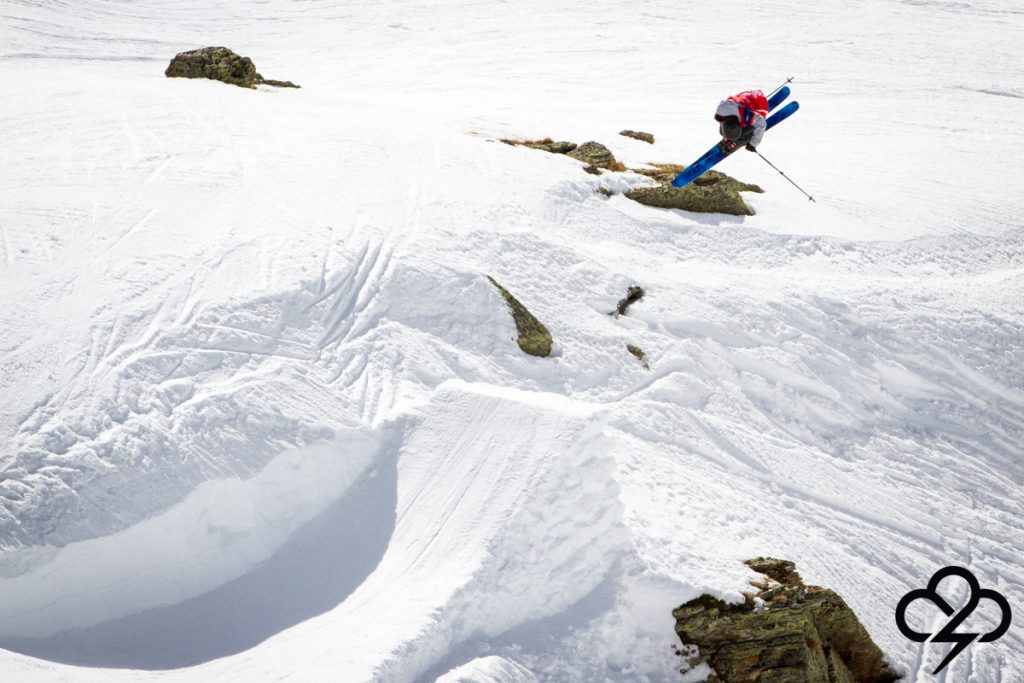 The Cineflex helicopter blazes by overhead scarily close as the skiers drop in one by one. Some stomp their lines, some don’t. Parker bags a clean opening cork 9 blunt in both his runs, but can’t land a follow-up switch 540. Seth Morrison laces a massive Seth backflip into a lincoln loop and a 360 to beat first-round challenger Sam Anthamatten. Europe’s secret weapon turns out to be Mathieu Bijasson, who stomps both his runs to cash valuable points for his team, alongside not-so-secret weapon, Team Europe captain Loïc Collomb-Patton, who also wins both his runs.

Team America, coming into the Backcountry Slopestyle trailing in points 7-9 against Team Europe after the Big Mountain portion of the competition, needs to make up points any way they can. But after breaking even with Europe in Round 1, the North Americans drop several key matches in Round 2, sealing the deal on a Team Europe victory.

“After the first round, we saw the score and thought maybe it would be difficult to win today,” said Collomb-Patton. “But then the second round was a big victory for the European team, six to two.” 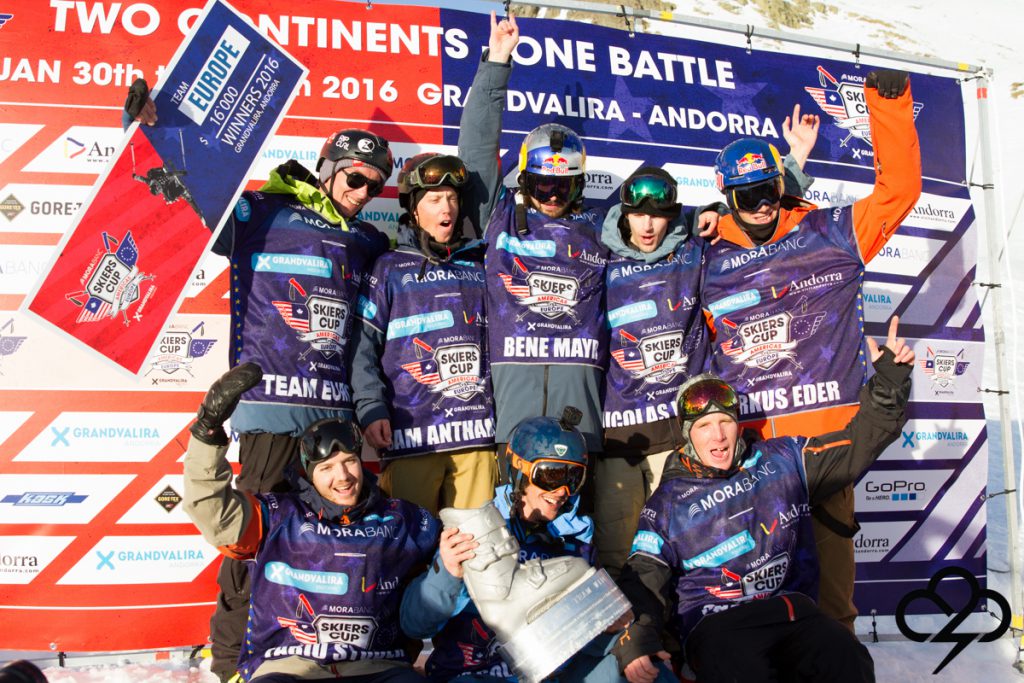 “In the end, the contest worked out great,” said French skier Arnaud Rougier, who judged the event alongside Sam Smoothy and Philou Poirer. “ The landings were a big firm, which was perfect for landing switch. Some really good stuff went down, everybody was pushing it hard.”

“They teams were almost equal at one point, but the Europeans were more consistent throughout both the freeride and freestyle segments,” said Rougier. “I think that’s the toughest thing about this event—you have to land four runs clean. And that made a difference.” 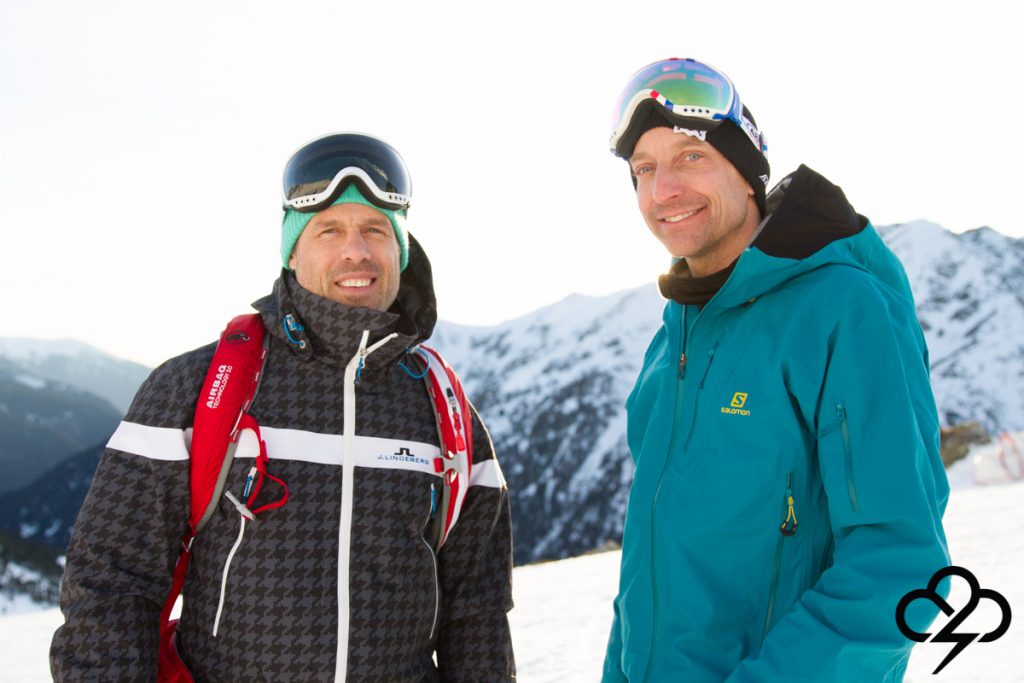 “Coming into today, I thought Team Americas was going to put down some good runs,” said Skiers Cup co-founder Kaj Zackrisson. “But in the end, Team Europe was killing it. They skied really well and stomped all their landings, and all the tricks we saw were amazing.”

And who was the most impressive skier of the week? 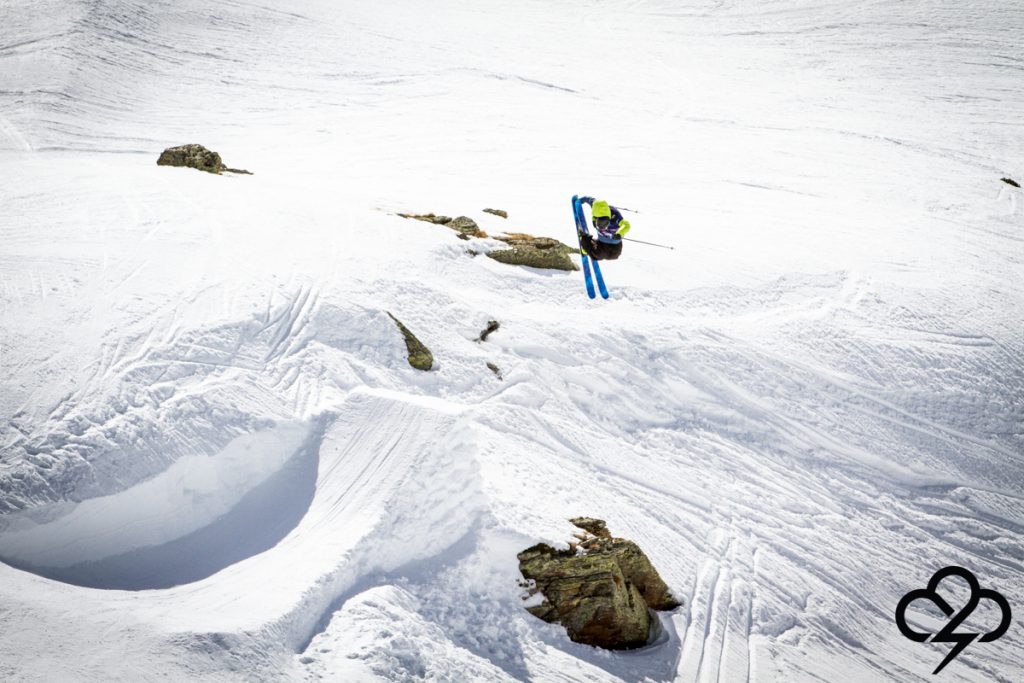 You may already know some of the things that Sam Anthamatten can do, like ice climbing, guiding, first ascents in the Himalayas, and flashing big-mountain lines like nobody’s business. Well, you can add another few things to that list now: Anthamatten can also do rightside cork 720s, toss flips off natural terrain, and generally handle a backcountry slopestyle as well as any of the jib kids. 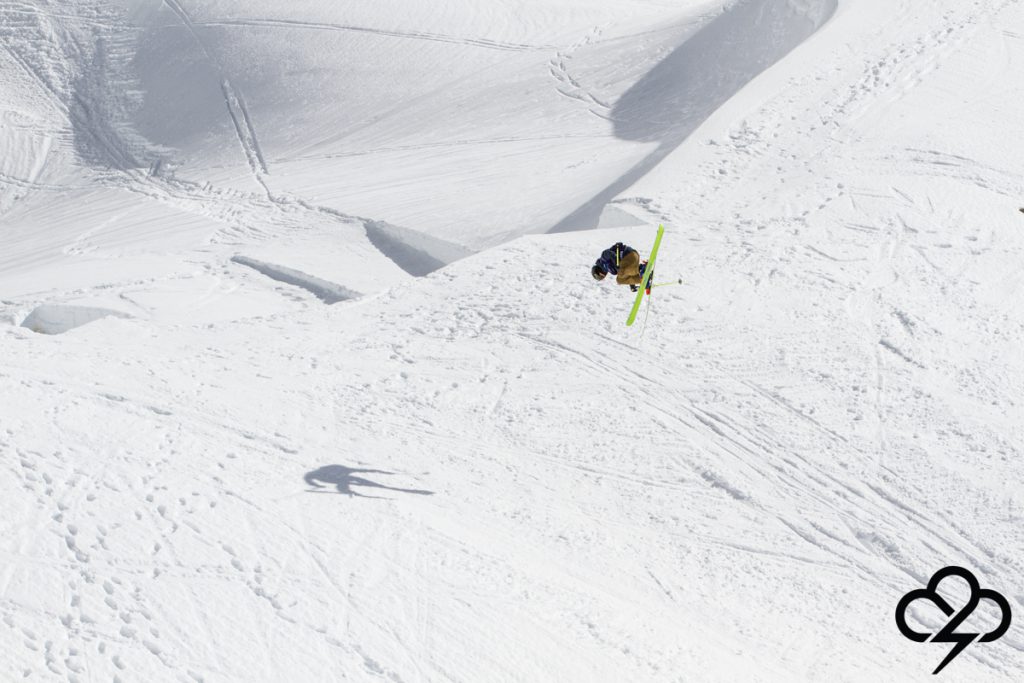 Before the start of the backcountry slopestyle, I was joking “Whats Anthamatten going to do today? Ice climb up the back of the kicker?” Then he dropped this rightside cork 7, and shut me right up.

Among all of the highly talented Skiers Cup participants, Anthamatten is quite unanimously proclaimed the event’s MVP in 2016. He held his own in the BC slopestyle, losing only one point in his match-up against Seth Morrison, and only because he sent a massive backflip too big and missed the next feature. Especially during the Big Mountain day, Anthamatten left us all stunned with his mastery of the mountain, with two brilliant runs that blended extreme technical capability with previously-unseen levels of creativity and line interpretation—surfing a cornice line, straightlining a grass chute and Super-Marioing off a rollover cliff drop to a near-perfect micro-transition landing.

“I had two good days of riding,” said Anthamatten. “Today I surprised myself— a cork 7 is normally not my specialty, but I had a good feeling and a good end to the run. Just having fun with the boys, you ski much better than when you put pressure on yourself.” 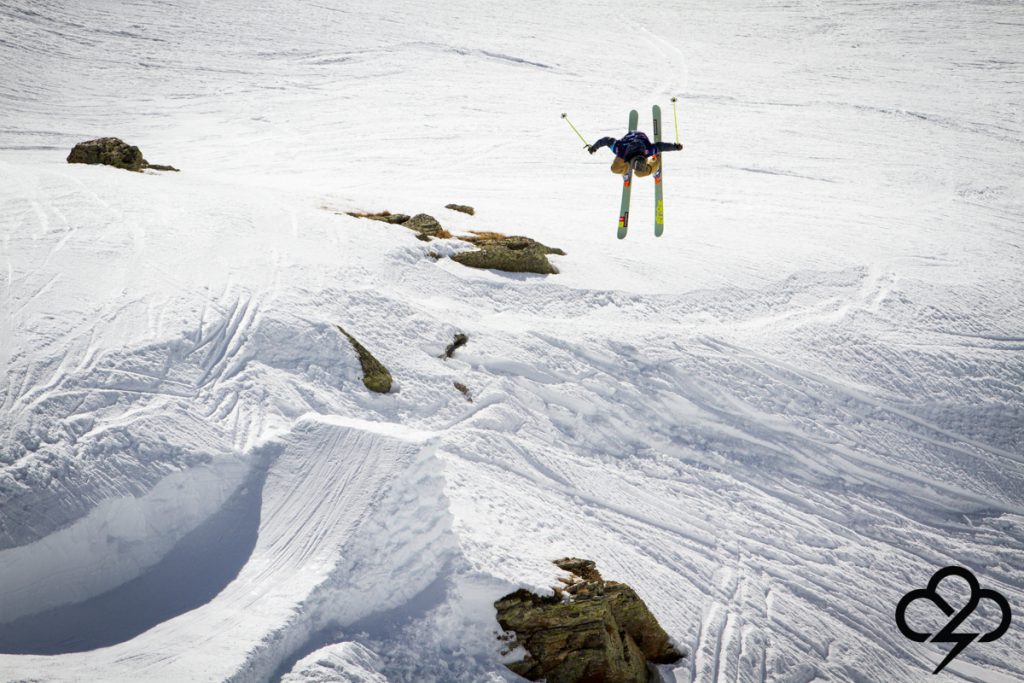 That’s a wrap on the 2016 Skiers Cup, but rest assured—Team Americas won’t be forgetting this defeat anytime soon. With their hemisphere now behind two to four in overall Skiers Cup matchups, 2017 team captain Tanner Rainville and right-hand-man Parker White are reportedly already plotting a comeback.

“Richard Permin is going to have to pick a good team,” said Zackrisson with his characteristic laugh. “Because I think Team Americas is going to train hard this summer.”

John Spriggs | “Must be nice” (MOVIE)

John Spriggs | “Must be nice” (MOVIE)