The 2021 Freeride World Tour wrapped up today, March 23, 2021 on the slopes of the storied Bec des Rosses in Verbier, Switzerland.

After high winds blasted through the region over the weekend, scouring much of the new-fallen snow from the flanks of the Bec, organizers made the hard decision to run the contest on the lower-profile “Petit Bec,” a shoulder of the main peak. Although the different start point significantly lessens the vertical drop of the venue, the Petit Bec is still a daunting freeride venue in its own right, steep from top to bottom and studded with rocks and cliffs throughout.

Scope the highlights from the 2021 Freeride World Tour finals in Verbier, Switzerland. (YouTube)

The women’s ski contest kicked off on a less than optimal note as Juliette Willmann took a hard slam off a big drop near the bottom of the face. She managed to limp off the venue under her own power, but was in obvious pain. The FWT’s first Polish competitor Zuzanna Witych also struggled on her run, getting hung up after her first air and putting her butt down.

It fell to tour veteran and three-time champion Arianna Tricomi to set the record straight. Tricomi flashed the Petit Bec, skiing hard and strong, and added a 360 off the windlip at the bottom of the face for good measure to post the first solid result of the women’s contest.

After Tricomi, Swiss competitor Elisabeth Gerritzen stepped things up a notch, blazing fast through the top of the venue before punching the biggest air of all the women at the bottom of the venue, and stomping it clean. Her score of 88.33 propelled her into first place. 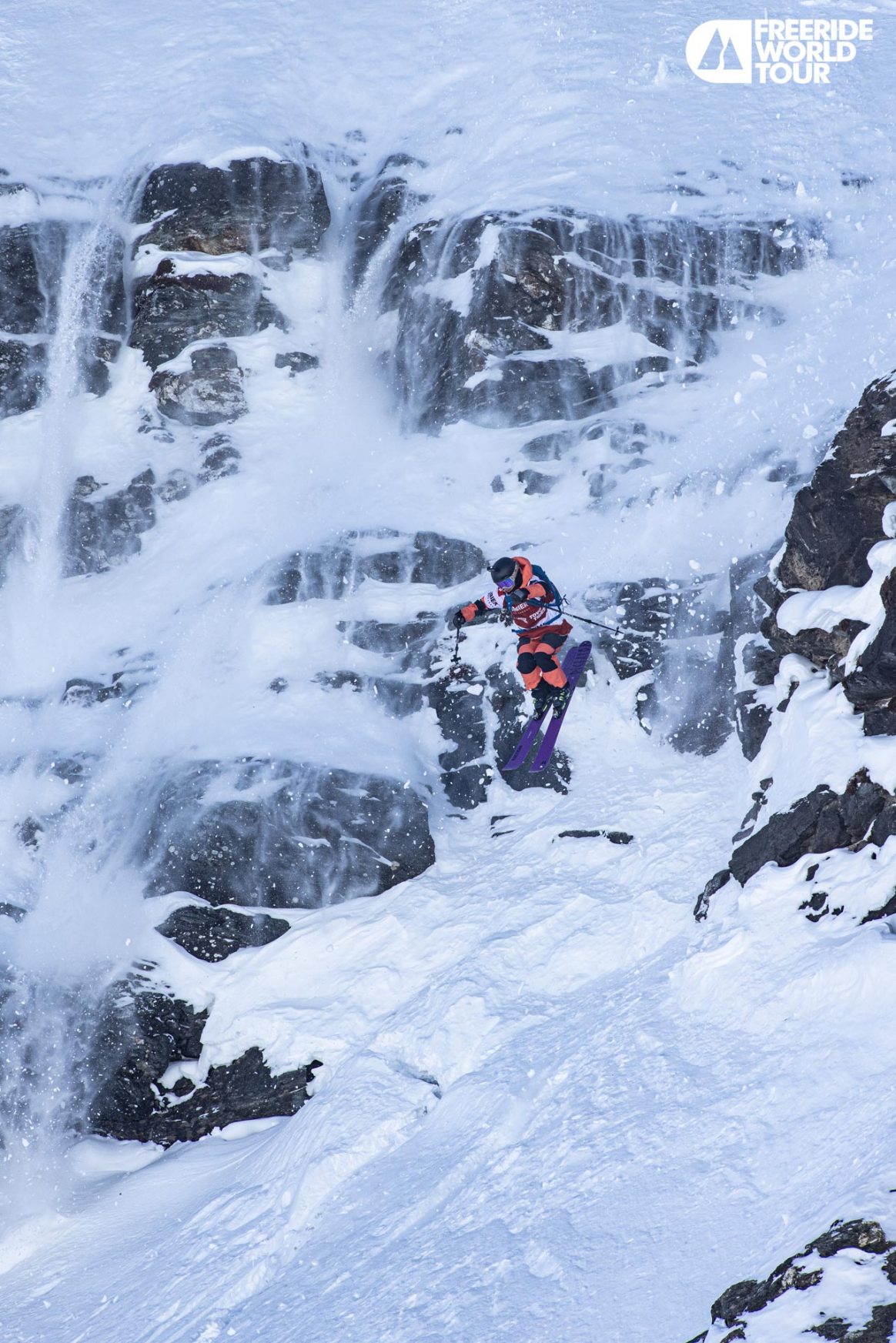 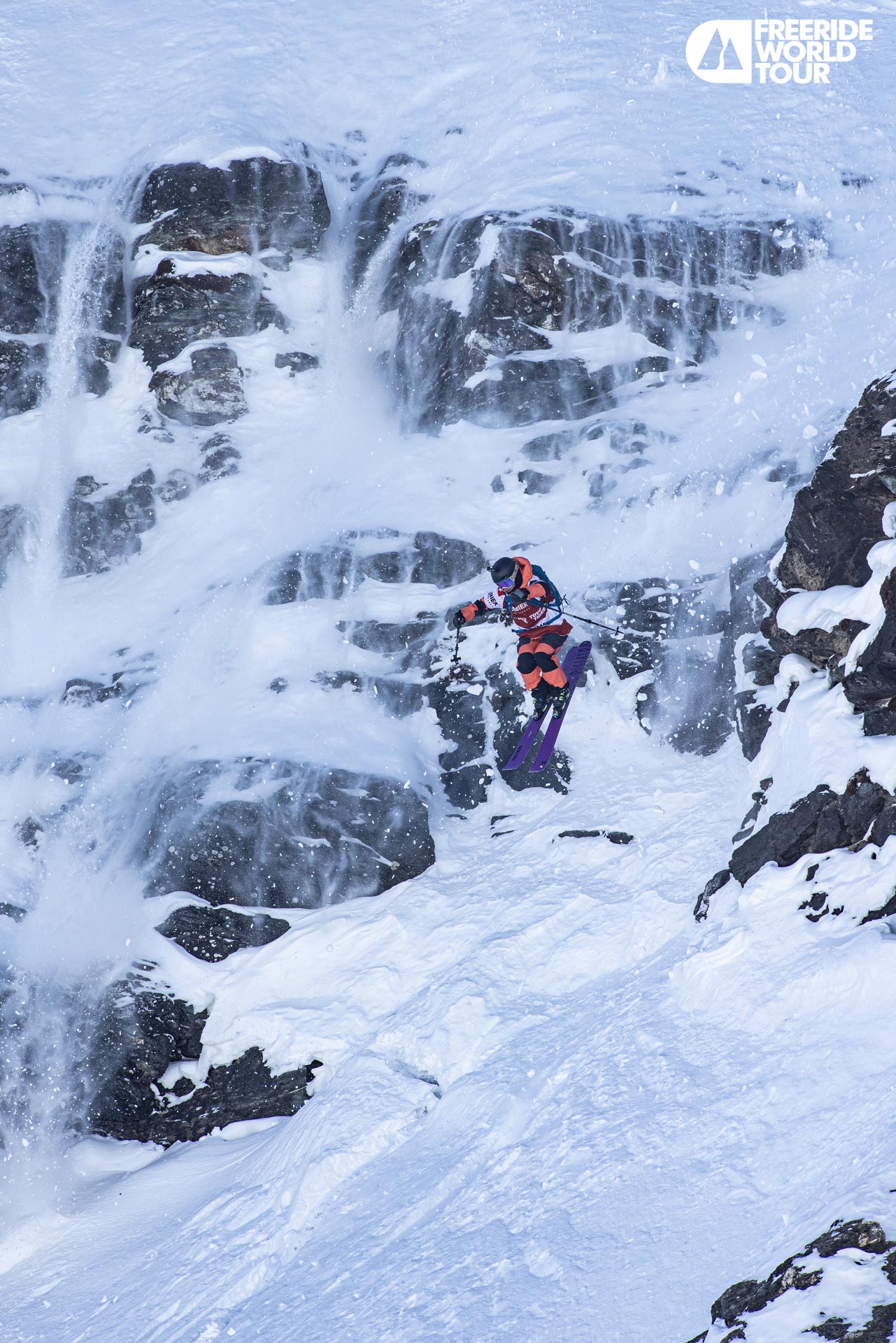 Elisabeth Gerritzen looked calm and in control as she flashed the Petit Bec and stomped the biggest drop of the women's contest. Photo: Daher/FWT

In her first appearance in Verbier, American tour rookie Tracy Chubb hit the same cliff as Gerritzen, but scrubbed the landing. The last woman skier to drop, Hedvig Wessel wore the golden leader’s bib and seemed to have a clear lock on the overall tour win. Wessel picked her way through a unique line, navigating a hanging shoulder, but didn’t air as often as her competition, and opted not to toss her signature backflip. As a result, she ended in third place for the day, behind Tricomi and Gerritzen.

As the overall scores were tallied, a shocker lit up the leaderboard: standing in fifth place before the contest, Gerritzen’s win launched her to the top of the overall standings, barely bumping Wessel—who’d seemed a shoo-in for the overall win—from the top position by a mere 20 points.

Gerritzen seemed perplexed, and almost apologetic regarding the overall results. “I have no words,” she said of her tour win. “I didn’t really expect it. I thought Hedvig had it. In a way, I think she deserves it more than me. She’s worked so hard for it.”

The surprise shake-up showed the power of the FWT’s new score-weighting system, which granted more points in the final two tour stops in Fieberbrunn and Verbier, in an attempt to keep the overall rankings competitive down to the last run. What’s for certain is that this goal was achieved—even if it produced overall results that no one, least of all the competitors themselves, was expecting. 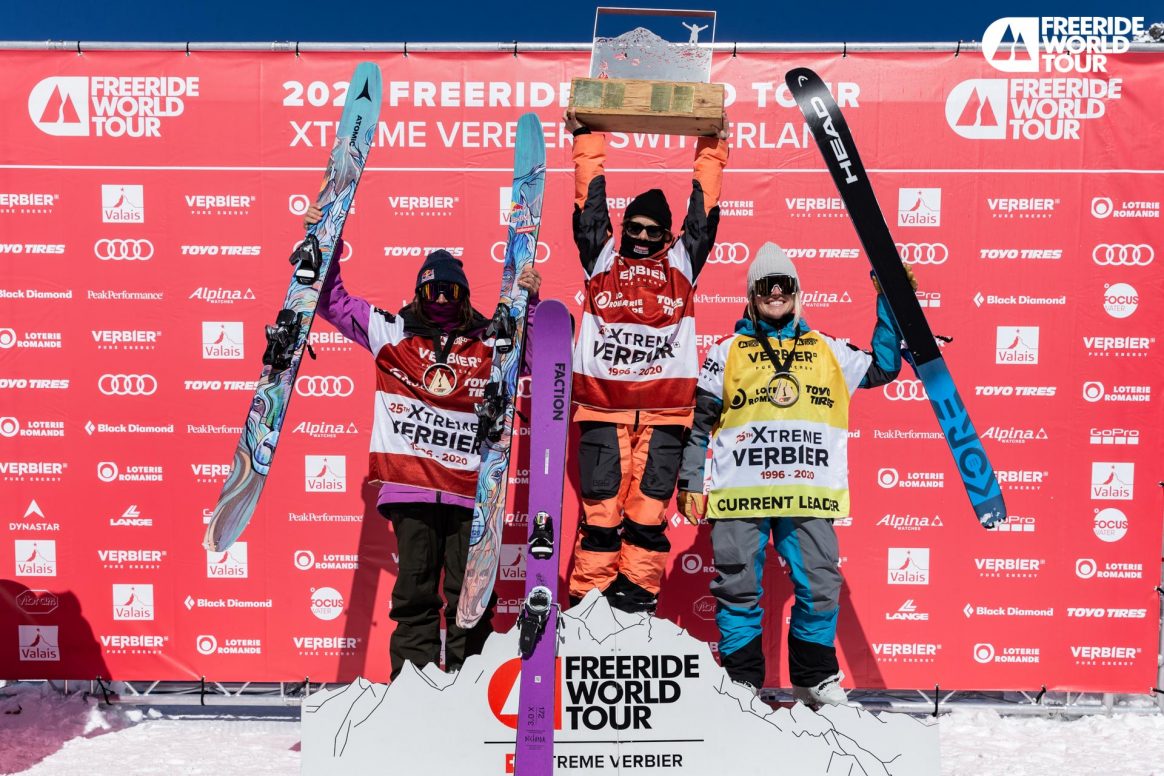 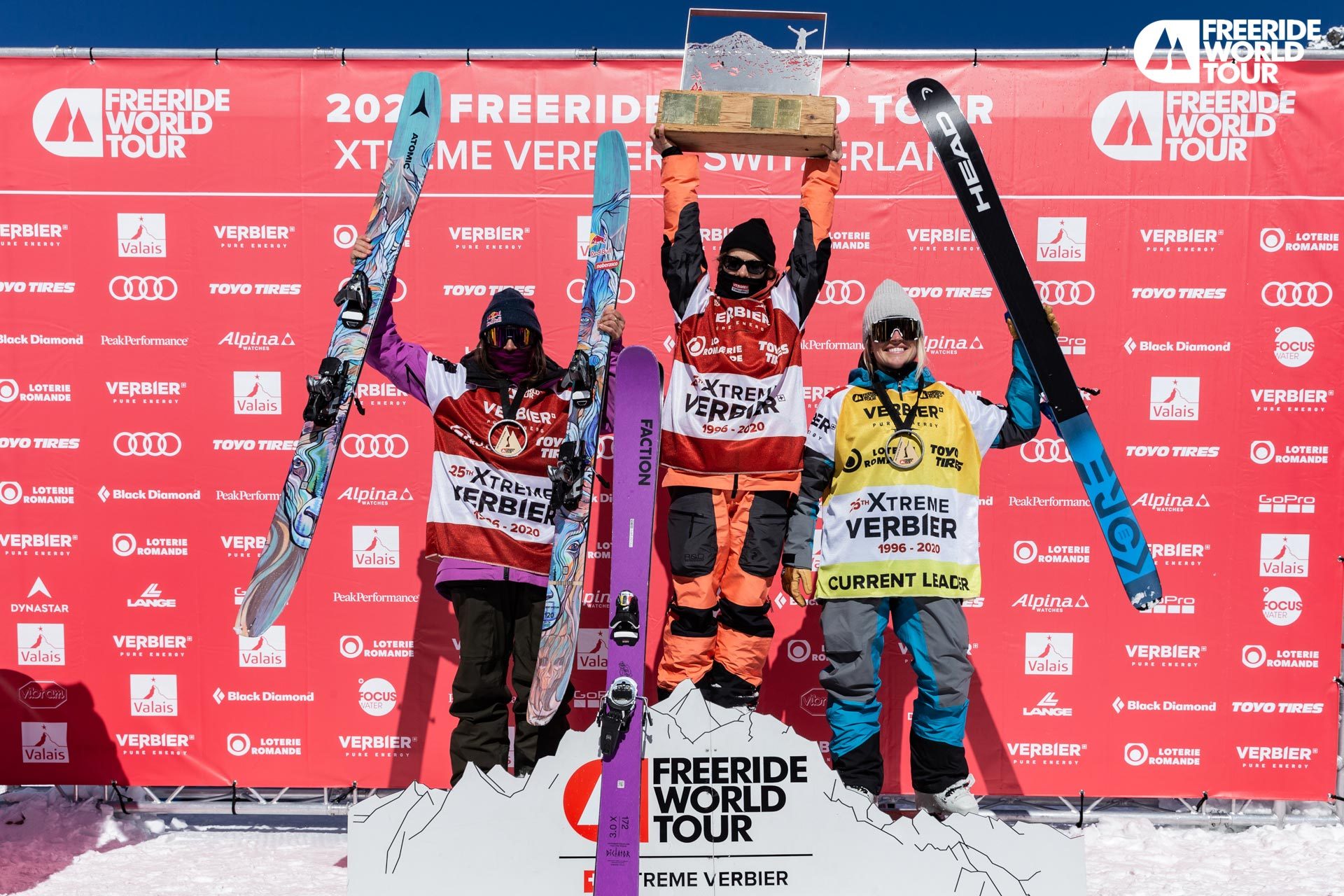 Men’s Ski: Turdell Adds another Notch to his belt

New Zealander Blake Marshall kicked off the men’s ski contest with a bang, stomping what must be the first rodeo 720 to be landed on the slopes of the Bec des Rosses. Even if he backslapped the landing, he still rode out clean, setting the bar high for what ended up being an edge-of-your-seat finals.

Léo Slemett, who’d missed most of the season due to an injured elbow but returned in time to ski the Bec, followed Marshall. He made up for lost time by sending a massive backflip off the venue’s biggest diving board, but tumbled hard on the landing, and left the finish area holding his knee. In his first Verbier appearance, Austrian challenger Tao Kreibich popped a 360 mid-run and managed to hang on to the landing of a sizable drop, but wasn’t fit for a podium placement today.

It fell to Spanish freeride macho Aymar Navarro to put down the run with the most “wow” factor of the day. He lined up the biggest double drop of the face, stomping two massive cliffs at breakneck speed and straightlining to the bottom in a classic show of his iron-legs, speed-freak style. Navarro’s ballsy line netted him a 86.33, putting him in the top seat for the time being.

French newcomer Maël Ollivier navigated cross-court to hit Navarro’s second drop, but couldn’t hang on to the landing. Following Ollivier, Drew Tabke provided a great demonstration of why he’s spent no less than 13 seasons on the tour, floating smooth airs throughout a unique line that zig-zagged across the face, and tossing a backflip off the bottom windlip to move into second place behind Navarro. Andrew Pollard’s run provided another fine demonstration of smoothness and fluidity, though like Tabke, his run lacked the fireworks needed to contest the podium. (On this note, the FWT really needs a “smooth operator” prize at each event.)

Making good on a promise he made at the beginning of the season, Carl Regnér Eriksson linked clean drops at the top of the venue before lacing up a near-perfect flatspin 360 japan on a cross-court air in the day’s most impressive example of freestyle prowess. He stomped a big air out the bottom to move into second place. His fellow Swede Kristofer Turdell took a similar line off the top, but veered looker’s right lower on the face, opening up a new zone and threading a big, technical drop through the rocks in a run that scored high on line choice. With the added bonus of a backflip on the bottom windlip, the judges deemed Turdell’s performance good enough to unseat Navarro from the top position.

In a run that probably could have won the day, Reine Barkered lined up the same amazing double drop that Aymar Navarro hit, going even bigger and faster—if such a thing is even possible. But a slight miscalculation led him to overrotate what should have been an easy backflip on the windlip, nullifying his chances of a big victory.

Frenchman Wadeck Gorack, who’s been on something of a run this season and was clearly swinging for the win, tossed a mid-slope 360 into his run, stomped a massive backflip off the cliff that Blake Marshall rodeoed, and added in a second backflip on the windlip, because why not? But the judges seemed to prefer Turdell’s more creative line over Gorack’s aerial antics, and placed him in second with an 88.

On the last run, American rookie Ross Tester, the overall leader coming into the contest, missed a chance to trick on a mid-slope feature. But he made up for it by lining up a monster backflip off the same feature that Léo Slemett had targeted, stomping it like a champ to slide into fourth place.

In a result not entirely free of judging controversy, Kristofer Turdell took the win for the day, trailed by Wadeck Gorack in second and Aymar Navarro in third. In another shake-up of the overall standings, Turdell also overtook Tester to claim the tour championship for the season, as Carl Regnér bumped up the standings into third place overall.

“Ever since 2018 this has been my dream,” said Turdell. I’ve been coming back to ski with all the friends on the tour and have the best winters possible. The main goal competition-wise has always been to win on the Bec. Now I won the Petite Bec, so I have to come back and win on the big one.”

That’s it, that’s all for the 2021 Freeride World Tour, in an interrupted contest season that saw the FWT confined to the bounds of Europe for the first time. Let’s keep our fingers crossed that the FWT will be able to return to venues in Japan and North America next season, and in the meantime a big congratulations to the 2021 overall winners: Elisabeth Gerritzen and Kristofer Turdell. 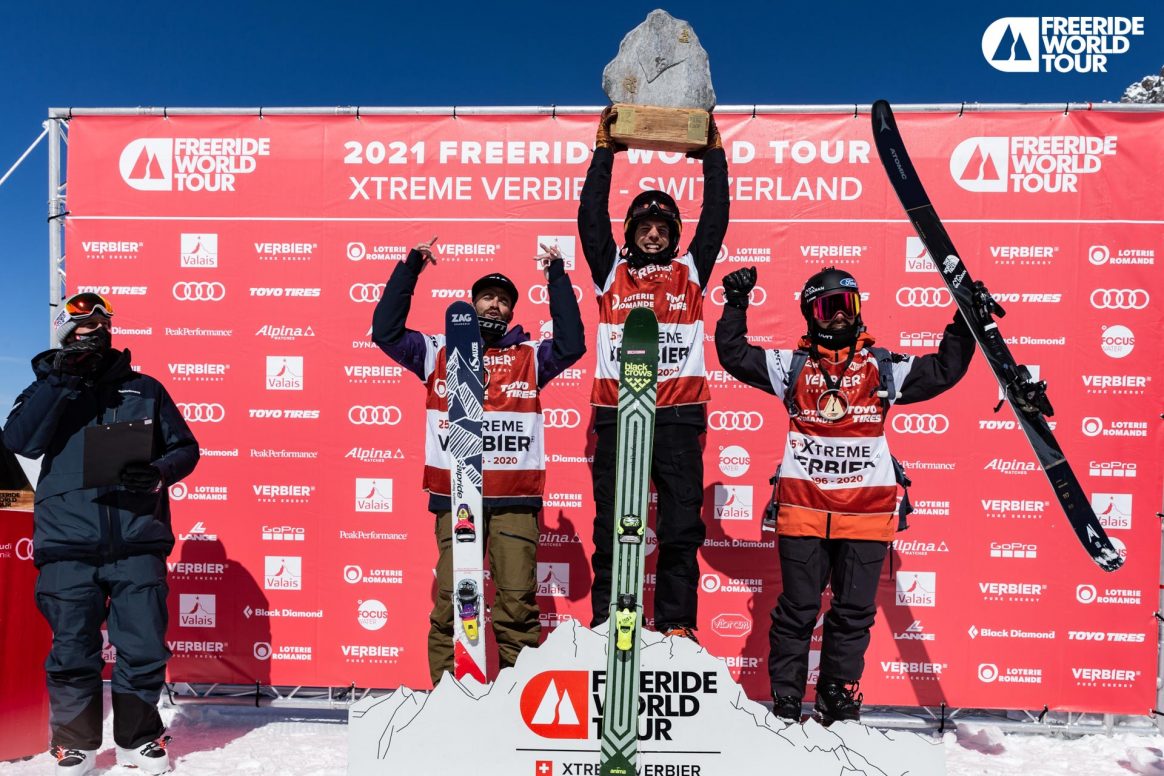 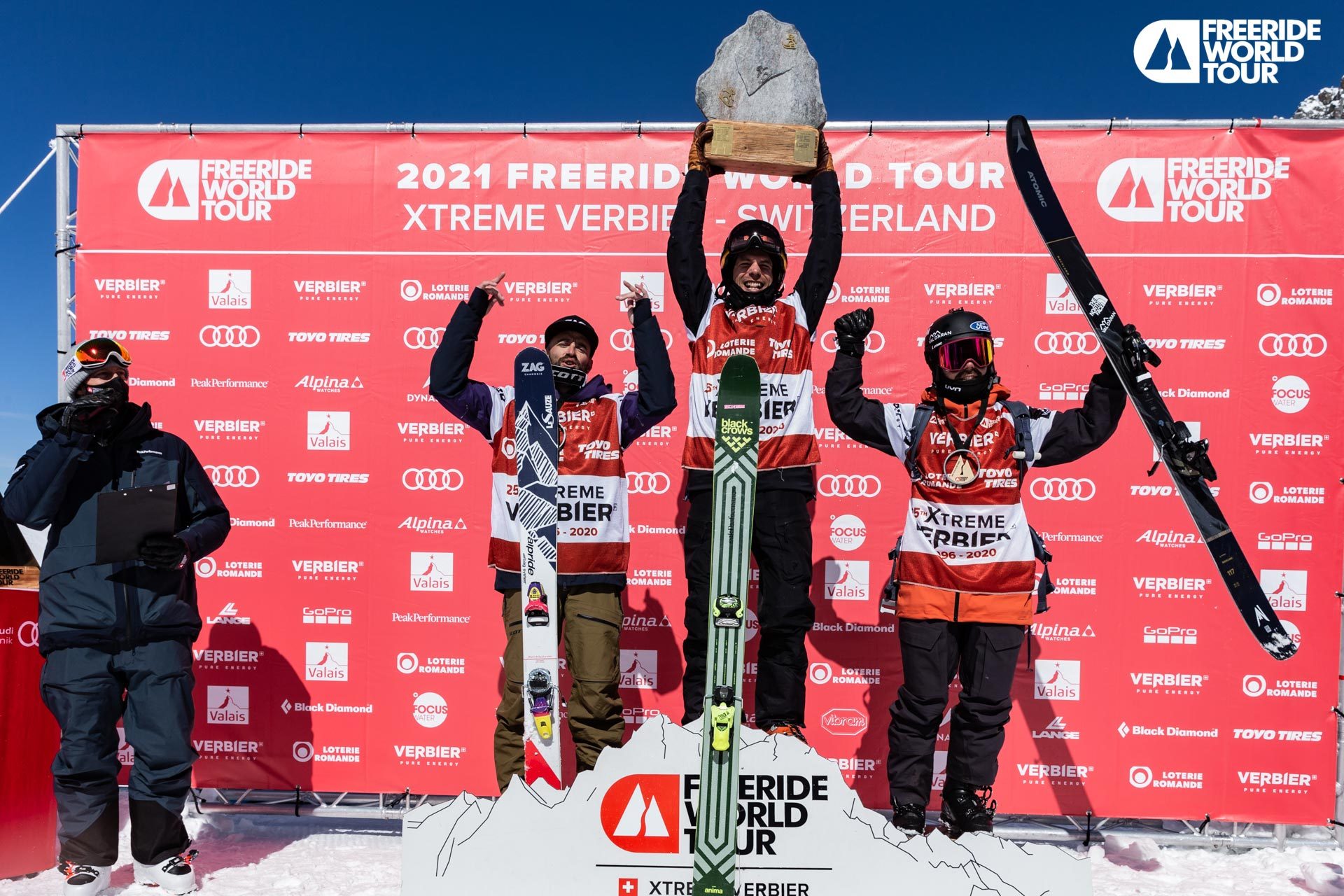